The water of the Ganga Devi that got stuck in Lord Shiva’s hair was brought down to bhoomi (earth) by Bhagiratha. 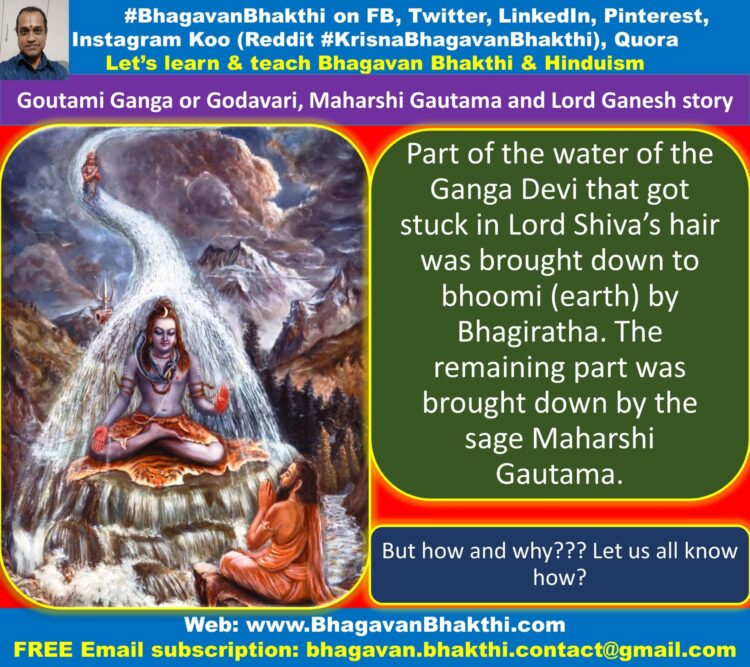 The remaining part was brought down by the sage Maharshi Gautama.

At the time, there was a terrible baragaalam (drought) on bhoomi (earth) which went on for fourteen years.

The only pradesham (place) that was not affected by the baragaalam (drought) was the Maharshi Gautama’s ashramam (hermitage).

Other then Maharshi Gautama’s praja (people), even outside praja (people) also gathered in the ashramam to save themselves from the baragaalam (drought).

And Maharshi Gautama made swagatam (welcomed) of them all.

Lord Ganesha thought that he might be able to devise a way to free Ganga Devi.

He went and began to live in Maharshi Gautama’s ashramam.

Lord Ganesha cultivated the snehitam (friendship) of the other sages and became quite friendly with them.

One of Parvati Devi’s companions were Jaya.

Lord Ganesha told Jaya that she has to adopt the form of a Go (cow) and eat the dhaanyam (cereals) in Maharshi Gautama’s kshatram (place).

And the samayam (time) she was struck, she was to lie down on the bhoomi (land) and do naatyam (act) as a mrityu shariram (dead body). 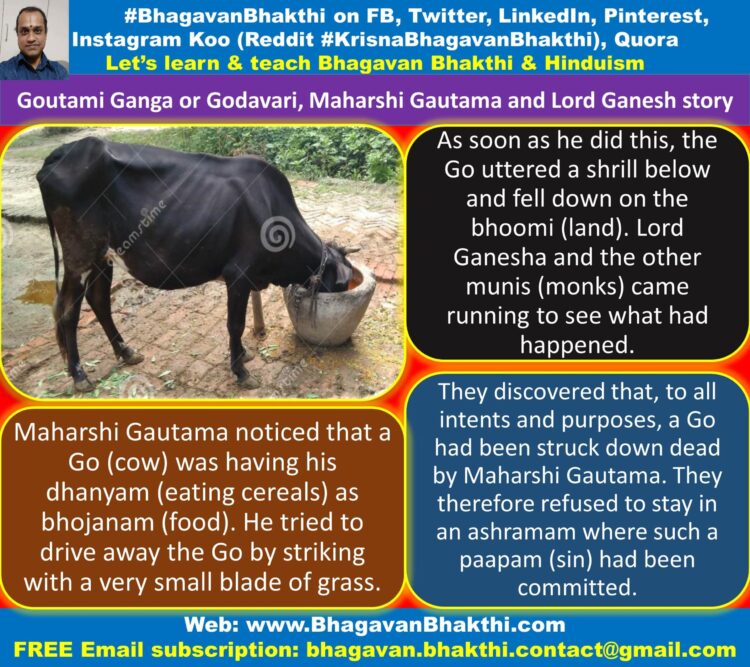 Maharshi Gautama noticed that a Go (cow) was having his dhanyam (eating cereals) as bhojanam (food).

He tried to drive away the Go by striking with a very small blade of grass.

As soon as he did this, the Go uttered a shrill below and fell down on the bhoomi (land).

Lord Ganesha and the other munis (monks) came running to see what had happened.

They discovered that, to all intents and purposes, a Go had been struck down dead by Maharshi Gautama.

They therefore refused to stay in an ashramam where such a paapam (sin) had been committed.

Maharshi Gautama tried to restrain them. Please do not go away and don’t do tyagam (leaving) of me, he said.

Tell me how I may perform tapasya for the same and to get out of this paristiti (situation).

You will have to bring down Ganga Devi from Shiva’s jatha (hair), replied Lord Ganesha.

When that jalam (water) touches the mruta deham (dead body) of the Go, your paapam (sin) will be forgiven.

Lord Ganesha was so friendly with the other rushis that they all accepted his solution.

Accordingly, Maharshi Gautama went to Kailasa Parvatam and began to do prarthana (prayer) to Lord Shiva. 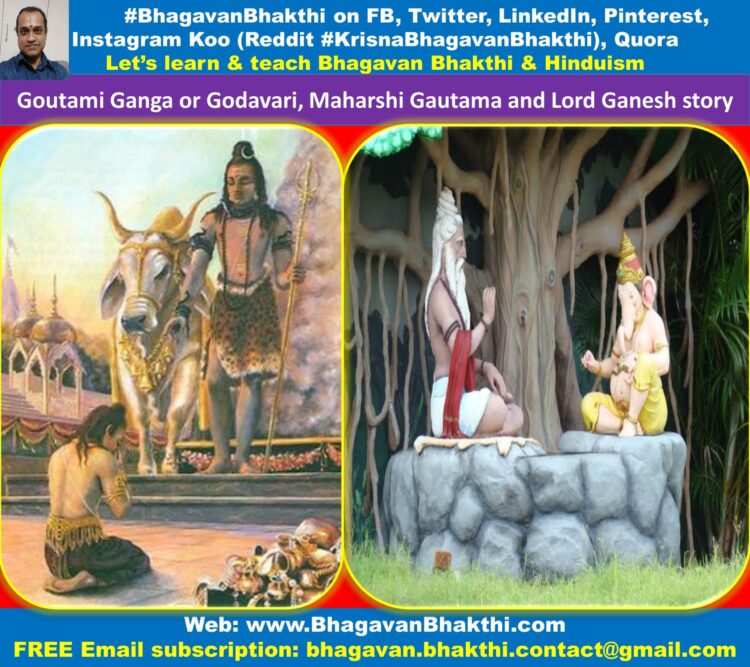 Lord Shiva was pleased at Maharshi Gautama’s tapasya and offered to grant an aashirvaadam (blessing).

Maharshi Gautama naturally wanted the aashirvaadam (blessing) that Ganga Devi might be brought down to earth again.

Lord Shiva agreed. It was thus that Ganga Devi was brought down to earth by the Maharshi Gautama.

Ganga Devi has four upanadi (tributary) in swargam, seven on bhoomi (earth) and four in the paataalam (under world).

Since it was the Great Maharshi Gautama who brought Ganga Devi down to bhoomi again (first it was Bhagiratha),

the river is also known as Gautami Ganga or since Maharshi Gautama had killed a Go it is also called Godaavari.

It should be noted that Ganga Devi take birth from the ‘paada’ (lotus feet) of Sri Hari,

Ultimately it is Bhagavan Sri Hari who is doing anything and everything.

Without his wishes nothing can happen. Thus it should be noted that the birth place of Ganga Devi is Sri Hari’s ‘paada’ (lotus feet).

We should always thank our Bhagavan Sri Hari and all the other Devatas (Demigods) and all the Great Rishis who have always bestowed blessings on us.

They have always provided us all the material things for us to live a happy life on this Bhoomandalam (earth).

To know about “Hindu (Indian) rivers unknown facts“, please click the below link: