Bhagavan Lord Sri Vishnu (Jagannath) blessings to you and your family!

Just before going to “How Puri Jagannath temple was built (Indradyumna) (Purushottam Kshetra)“, let us know a brief, basic and very important information. 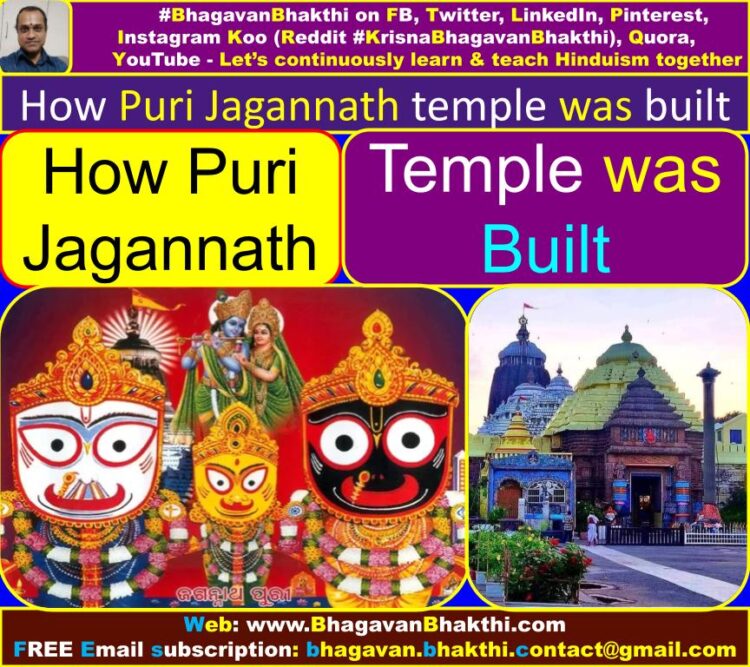 Jagannath (Lord Krishna) is the one and only King of the unlimited universes.

How Puri Jagannath temple was built (Indradyumna) (Purushottam Kshetra) is as given below:

1. King Indradyumna : In Satya yuga there was a Raja (King) named Indradyumna.

He was pramanika (honest) and also he was mahan satyavadi (someone who always tell truth).

He had high knowledge of shastras / scriptures and the Vedas, and skilled in the use of shashShaashtrams (all the Dharma Shastras).

6. What is Tirtha Sthalam : A tirtha sthalam (A place where auspicious temple exists) is a sacred place of pilgrimage.

7. No place satisfied Indradyumna : Indradyumna scanned all the existing tirthas and cities.

But none of them satisfied Indradyumna. None of them.

8. Indradyumna lamented : Indradyumna felt very bad as he was not able to find an appropriate place for worshiping Bhagavan Sri Maha Vishnu.

9. Indradyumna capital Avanti : Indradyumna’s own capital was the city of Avanti, in the kingdom of Malava.

Vyapaaris (businessmen) from many deshams (countries) came there with all sorts of vastus (materials) for vyapaaram (business).

The roads of the city were lined with vyaparis (businessmen). 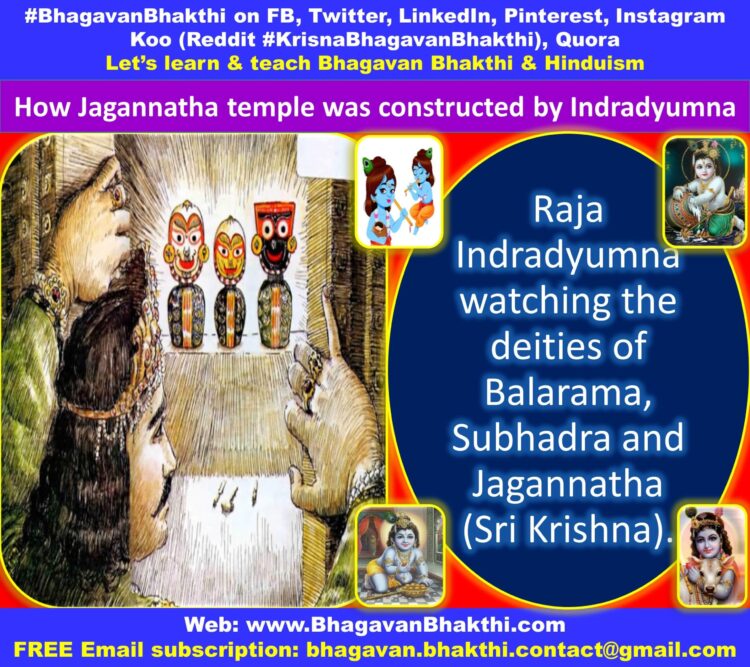 The grihams (houses etc.) were painted in the svetam varnam (while color).

All naagarikas (citizens) of Avanti were in sukham (happy) and all were in santosha svabhavam (who were always in bliss).

There were many devalayam (temples), groves and ponds in Avanti.

Any vrukshams that grew on bhoomi could be found there.

The chitram (photo) kept there was so pavitram (auspicious) that worshipping Lord Shiva in the devalayam of Mahakala was poojyam / blessed,

that one was getting punya / good deeds of performing one thousand ashvamedha yajnas. 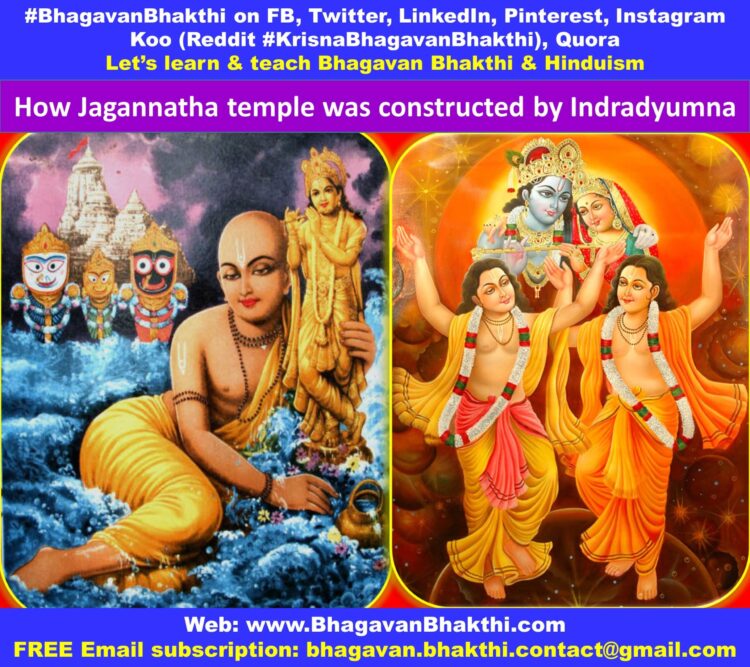 The nadi (river) Shipra flowed past Avanti. On the banks of the nadi (river) there was a devalayam (temple) of Bhagavan Sri Maha Vishnu known as Govindasvami.

But Indradyumna was not satisfied with these devalayams (temples).

Indradyumna left Avanti to look for a proper place.

His soldiers and subjects accompanied their raja, so that it looked as if the entire city of Avanti was on the march.

After travelling for many days, they arrived on the shores of the southern ocean, the ocean that is known as lavana (salt) samudram.

There were so many waves in the samudram (ocean) that the ocean itself seemed to be making naatyam (dancing).

Samudra praanis (creatures of ocean) lived in the samudram with santosham (happiness) and the jalam (water) was also the source of all sorts of jewels.

Indradyumna began to live on the shores of the samudram.

Indradyumna discovered a place near the samudram that was thick with pushpams (flowers) and phalams (fruits).

Many types of pakshis (birds) gathered there to eat the phalams (fruits).

This was the place known as Purushottama kshetra, the city of Puri of aadhunika samayam (present Puri). 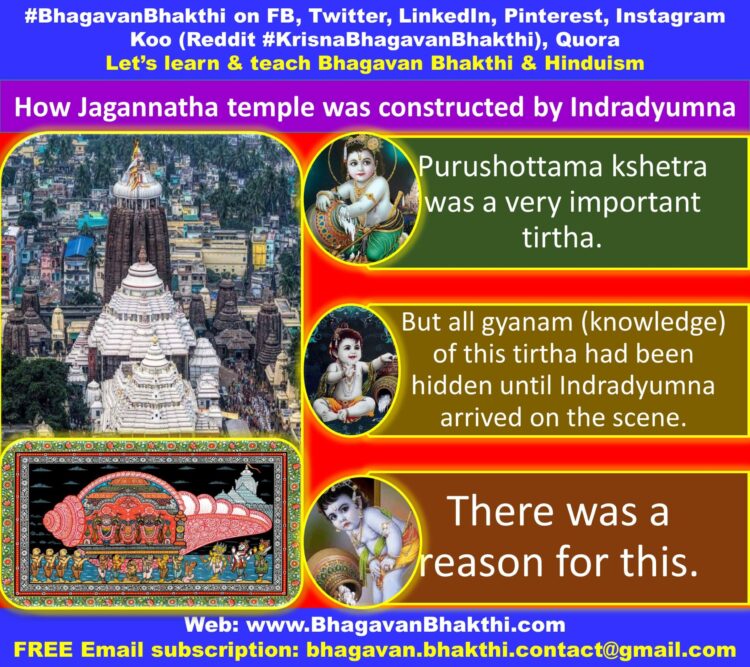 But all gyanam (knowledge) of this tirtha had been hidden until Indradyumna arrived on the scene.

There was a reason for this.

Many years ago, there used to be a pratimam (statue) of Bhagavan Sri maha Vishnu there, where prajam (citizens) used to do prarthanam (praying).

So pavitram (auspicious) was the pratima (statue) that all the paapam (sins) of the bhaktaadis (devotees) were immediately forgiven.

The result was that Sri Yama Deva could not give shiksha (punishment) to any of the paapis (sinners).

Bhagavan Sri Maha Vishnu hid the image under the sand so that no one knew that it existed. 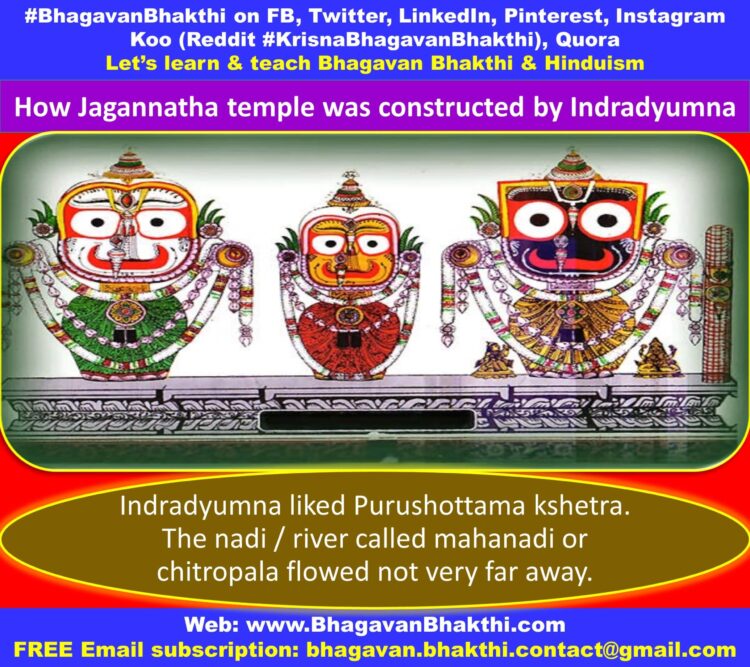 The prajam (citizens) who lived around the pradesham (place) were dharmishttas (people who follow dharma).

Indradyumna decided that this was the right pradesham (place) for building a devalayam (temple) to Bhagavan Sri Maha Vishnu.

On a shubha dinam (auspicious day), the shankhustaapanam (starting of the work) was done.

Indradyumna then got in touch with the rajas of Kalinga, Utkala and Koshala.

Indradyumna made vinanti (request) to make sahaayam in fetching stones for the kattadam (building) of the devalayam (temple).

The rajas sent their vaastushilpis (architectures) to the Vindhya parvatam (hill).

The stones were gathered from these parvatam (hill) and were brought to Purushottama Kshetram in boats and rathams (chariots).

The dootaas (messengers) were also sent to several other rajas for sahaayam (help).

They came with their sena / soldiers and with a lot of aishwaryam (wealth). 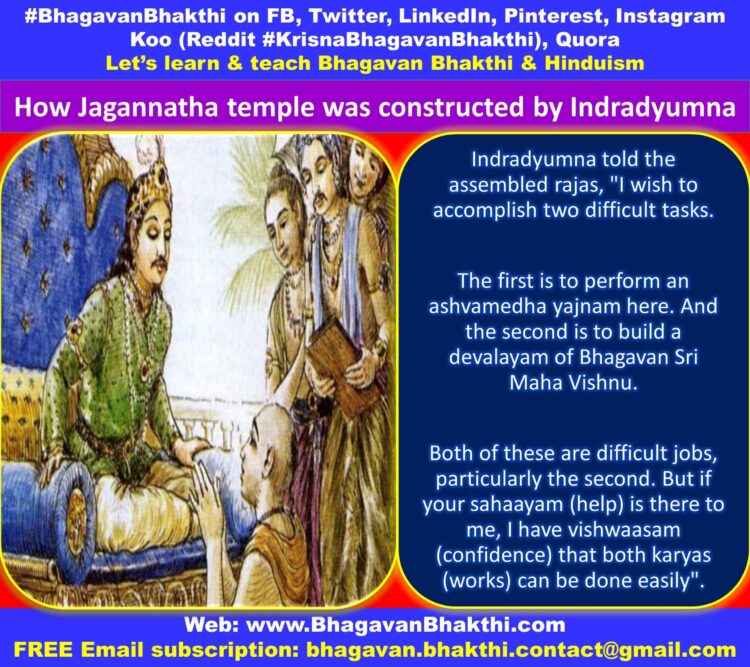 “The first is to perform an ashvamedha yajnam here. And the second is to build a devalayam of Bhagavan Sri Maha Vishnu.”

“Both of these are difficult jobs, particularly the second.”

“But if your sahaayam (help) is there to me, I have vishwaasam (confidence) that both karyas (works) can be done easily”.

The rajas agreed for sahaayam (help).

The place where the yajna was to be held was made entirely out of swarnam (gold).

In fact, all the vastus (materials) used in the yajna were made out of swarnam (gold).

Brahmanas from all over Jambudvipa (above the north east of Bharata desham) came to witness the yagnam.

They made daanam (donation) of gajas (elephants), ashvas (horses) and Go (cows) as alms.

Never has there been any other yagnam to rival the one that Indradyumna performed. 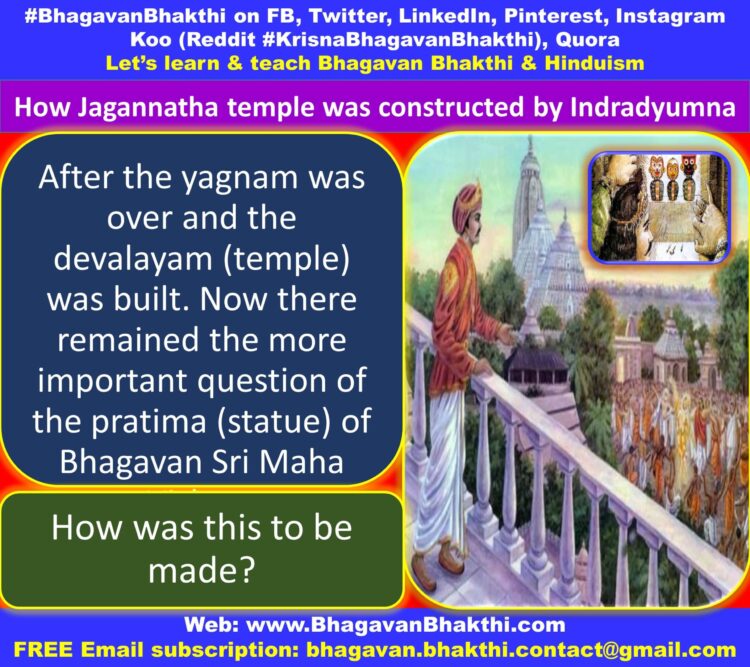 After the yagnam was over and the devalayam (temple) was built.

Now there remained the more important question of the pratima (statue) of Bhagavan Sri Maha Vishnu.

How was this to be made?

Bhagavan Sri Vishnu appeared before Indradyumna in a swapnam (dream) and said:

“Why are you in much of dukham (unhappy)?”

“When Surya Deva rises, go to the shores of the samudram (ocean). There you will find a vruksham (tree).”

“Half of the vruksham is in the jalam (water) and the remaining half in the sand.”

“Chop down this vruksham (tree). Its wood will give you the material for the pratimam (statue)”.

After this, in the morning, Indradyumna went to the samudram (ocean) and found the vriksham (tree).

It was just as Bhagavan Sri Maha Vishnu had described it to be.

With an axe, Indradyumna chopped down the vruksham (tree).

As he was about to slice the trunk in two, two brahmanas appeared before him.

Although Indradyumna did not know it, these two brahmanas were Bhagavan Sri Maha Vishnu and Vishvakarma in vesham (disguise). 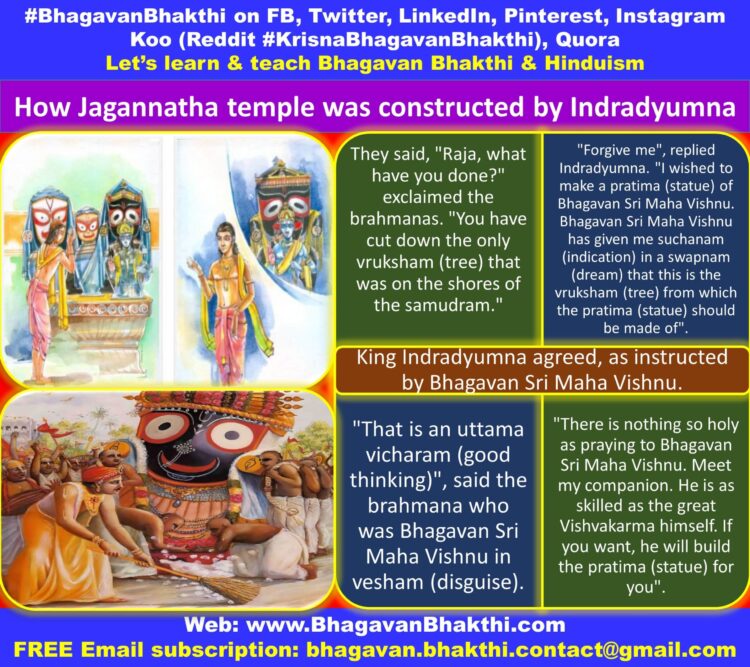 They said, “Raja, what have you done?” exclaimed the brahmanas.”

“You have cut down the only vruksham (tree) that was on the shores of the samudram.”

“Forgive me”, replied Indradyumna. “I wished to make a pratima (statue) of Bhagavan Sri Maha Vishnu.”

“Bhagavan Sri Maha Vishnu has given me suchanam (indication) in a swapnam (dream) that this is the vruksham (tree) from which the pratima (statue) should be made of”.

“That is an uttama vicharam (good thinking)”, said the brahmana who was Bhagavan Sri Maha Vishnu in vesham (disguise).

“There is nothing so holy as praying to Bhagavan Sri Maha Vishnu.”

“Meet my companion. He is as skilled as the great Vishvakarma himself. If you want, he will build the pratima (statue) for you”.

King Indradyumna agreed, as instructed by Bhagavan Sri Maha Vishnu. Vishvakarma started to build the pratima (statue). Or, to be more accurate: 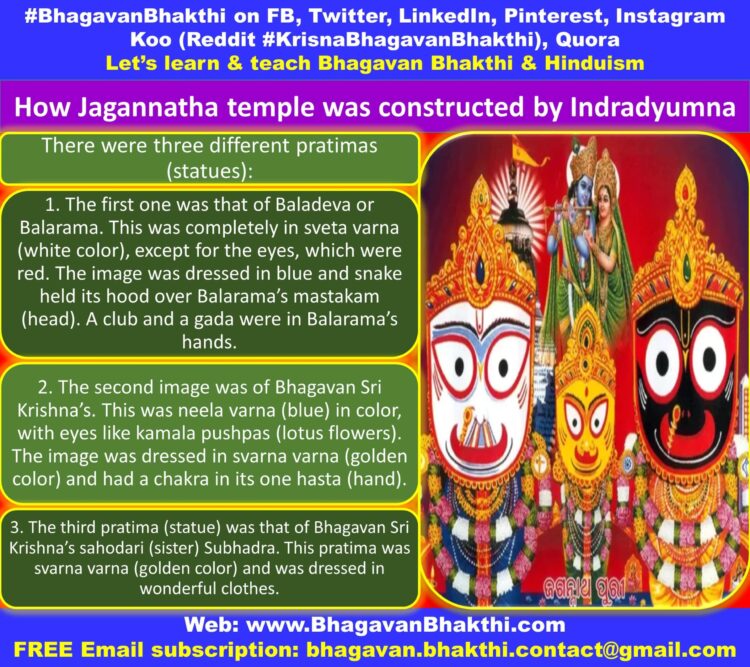 There were three different pratimas (statues) as given below:

1. The first one was that of Baladeva or Balarama.

This was completely in sveta varna (white color), except for the eyes, which were red.

The image was dressed in blue and snake held its hood over Balarama’s mastakam (head).

A club and a gada were in Balarama’s hands.

2. The second image was of Bhagavan Sri Krishna’s.

This was neela varna (blue) in color, with eyes like kamala pushpas (lotus flowers).

The image was dressed in svarna varna (golden color) and had a chakra in its one hasta (hand).

3. The third pratima (statue) was that of Bhagavan Sri Krishna’s sahodari (sister) Subhadra.

This pratima was svarna varna (golden color) and was dressed in wonderful clothes.

When Indradyumna discovered that the pratimas were made in a matter of kshanam (within seconds), he was thunderstruck.

Indradyumna fell at their paadam (legs) and said, “Please tell me who you are both.”

Bhagavan Sri Maha Vishnu and Vishvakarma then revealed their true selves and Indradyumna was thrilled.

And even after Indradyumna died, a place would be reserved for him in swargam.

On a mangalam divasam (auspicious day), the three pratimas (statues) were installed in the devalayam (temple).

To know about “Puri Jagannath unknown facts“, please click the below link: