Just before going to “List of wars between Gods and Demons (Suras and Asuras)“, let us know a brief, basic and very important information. 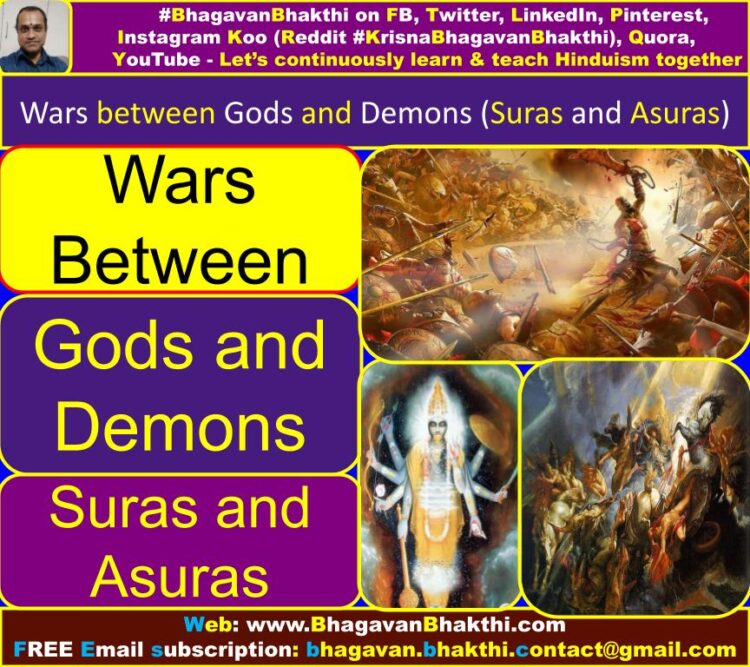 Both Suras and Asuras are highly capable.

But the difference is about Dharma.

Suras are usually with Dharma and Asuras are normally with Adharma.

The great Hindu Sanatana Dharma teachings prescribe war as the final choice to be applied only after all peaceful methods are depleted.

Participation in Dharmic yuddha (Righteous war) was said to be honorable.

And was a principal duty of the Kshatriyas (Warriors of Hinduism), and victory in such wars was regarded as a matter of great pride.

List of wars between Gods and Demons are as given below: 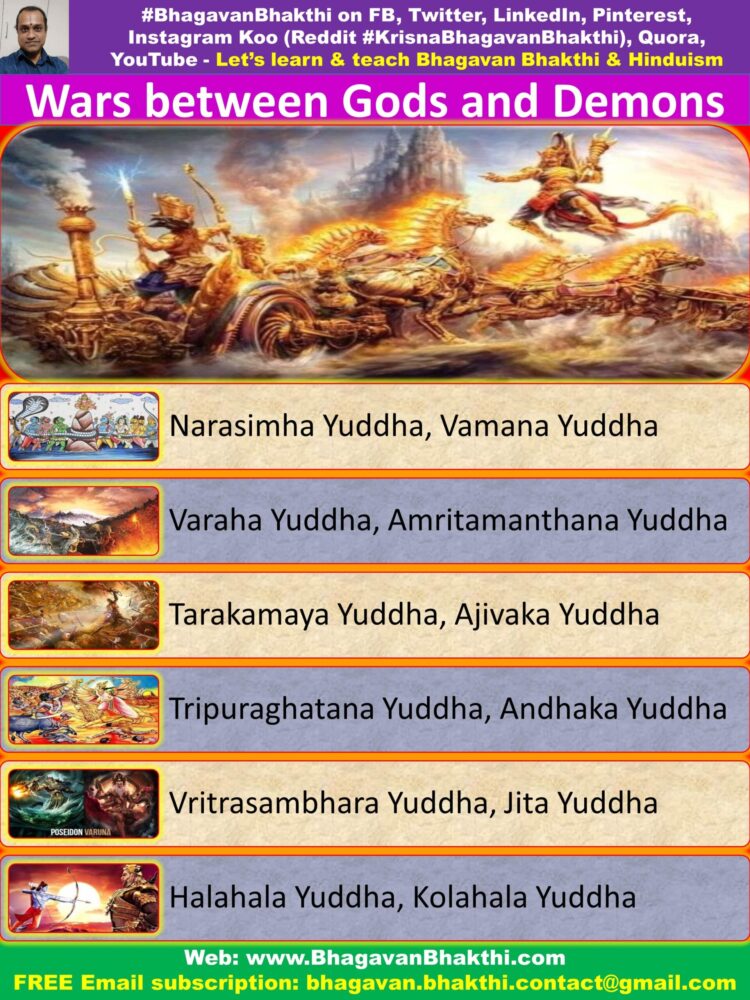 As given above, there were twelve major wars between the devas (Gods) and the asuras (demons). It’s explanation is as given below:

Wars between the Gods (Demigods) and Demons (Asuras) brief explanation is as given below:

Lord Vishnu adopted the form (avatar) of Lord Narasimha, that is, half lion and half man, and slayed this demon Hiranyakashipu.

Lord Narasimha then later made Prahlada the king of the demons and also for the whole of the earth.

It took place when Bali Chakravarti was the king of the demons, that is, he was king for whole of the globe (earth).

Lord Vishnu adopted the form (avatar) of a dwarf (Lord Vamana) to subjugated all the demons.

Even today, Bali Chakravarti is the king of the Patala.

We must be aware that, we celebrate the Deepavali day called Bali Padyami.

Because of this reason itself, we celebrate the Bali Padyami.

Vishnu adopted the form of a wild boar (Varaha) and killed Hiranyaksha.

Both are Hiranyakashipu and Hiranyaksha are the same who ware the security guards in the Vaikuntha Loka for Lord Vishnu.

In Vaikuntha, they are known was Jaya and Vijaya.

Both of these take the forms of Ravana and Kumbhakarana during the Treta Yuga period.

And during the Dvapara Yuga, they take the form of Shishupala and Dantavakra.

And this took place over the manthana (churning ) of the ocean for amrita (nectar).

During this war, Bali Chakravarti was the king of the whole globe (earth).

5. Tarakamaya Yuddha : The fifth war between the devas and the asuras took place over the abduction of Tara.

And this came to be known as the Tarakamaya Yuddha.

It was Shiva who killed the demons Tripura (Totally 3 demons) in this war.

All these three were the sons of the asura called Tarakasura. Earlier, this demons Tarakasura was killed by Lord Shiva’s second son Kartikeya.

These three began to perform severe penance / tapasya. All these three were then granted boons by Lord Brahma to have three forts, that is –

one is golden fort (Tarakaksha), one is silver fort (Vidyunmali), and third one is iron fort (Kalalaksha).

Lord Vishnu then made a new religion to make these demons more evil.

The main and only objective of this was to end the atrocities of all the three asuras.

This job was taken upon by Lord Shiva, which took three days on the battlefield, finally killing Tripurasura and destroying the three cities.

This occurred on the full moon day in the Kartika masam (month) and thus this day is celebrated as Tripurari Pournima.

It was Vishnu who engineered that Andhaka be killed when Andhaka expressed a desire to abduct Shiva’s wife. 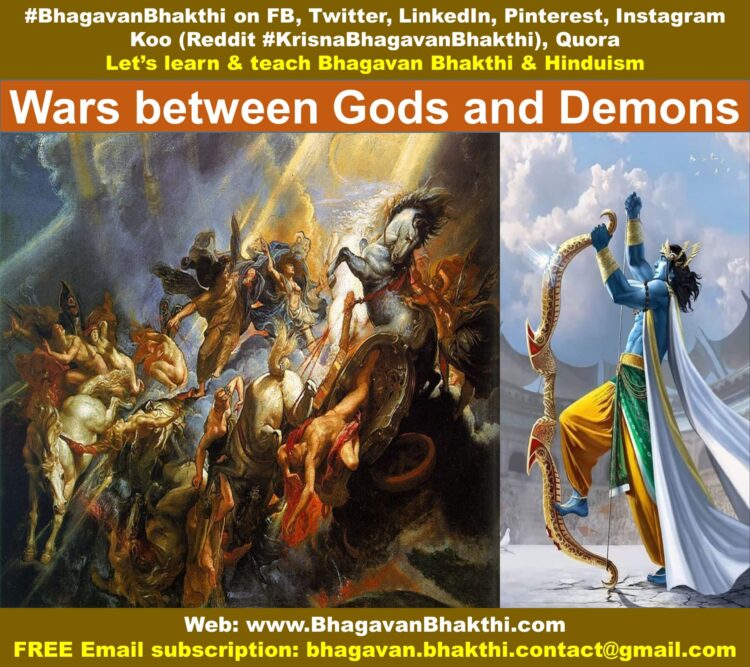 In this war, Lord Vishnu killed Shalva and the other demons, and Lord Parashurama killed the evil kshatriyas.

You may ask, why did Lord Parashurama rotated 21 times around the earth to kill the evil Kshatriyas?

Why Lord Parashurama didn’t killed all the evil Kshatriyas in just one time itself?

Answer is here : Lord Parashurama is an avatar of Lord Vishnu. He has to follow all the Dharmas.

Since all the evil people (Kshatriyas) don’t take birth at a single itself.

And also Lord Parashurama can’t kill when a Kshatriya is just a child.

Thus Lord Parashurama was waiting for few years until all the evil Kshatriyas grow up to a certain age.

And thus then later, Lord Parashurama was killing these evil Kshatriyas when they grow up.

Thus it took Lord Parashurama 21 times to kill all the evil Kshatriyas during his period.

An asura named Halahala (poison) had invaded Shiva’s body and flooded it with poison.

But Vishnu managed to destroy the demon.