Just before moving forward to know about “What is Krishna and Shiva fighting story”, let us have a brief background about Bhagavan Sri Vishnu (Krishna), Sri Brahma Deva and Lord Shiva.

Here Padmanabha means, he is someone who has given birth from his nabhi (navel) and the one who has taken birth is sitting on a Padma flower (Lotus flower). For this reason Bhagavan Sri Vishnu is also known as Padmanabha. 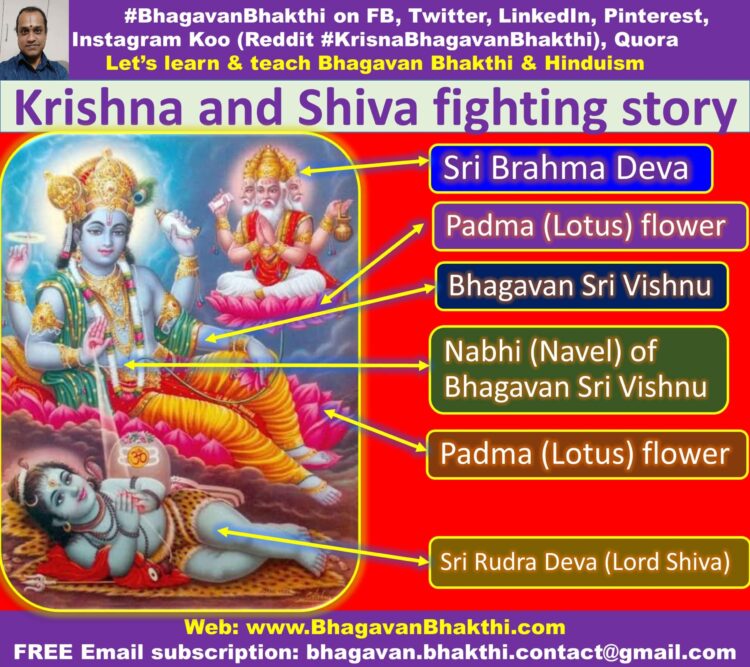 Meaning of Raudra : ‘furiously crying’. In Indian literature one of eight prevailing sentiments, rasas. Raudra is based in turn on the complementary ‘emotion’ (bhāva) of anger, krodha. The term raudra also denote a follower of the god Rudra. 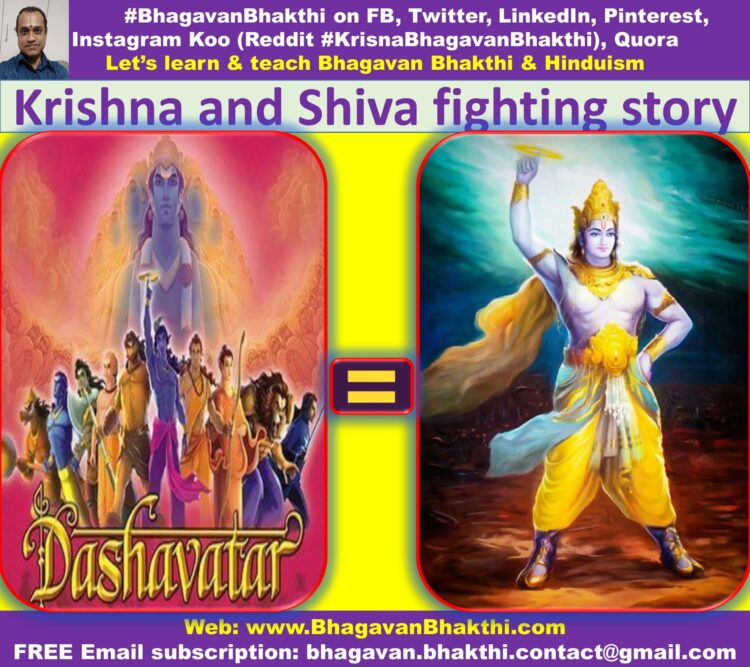 This is very clearly said in all the Vedas, Pancharatra, Puranas, Mahabharata, Ramayana, Upanishads, etc.

Now, let us move forward to know about “What is Krishna and Shiva fighting story” as given below:

What is Krishna and Shiva fighting story:

This story is taken from Srimad Bhagavatam (Sri Vishnu Purana).

Sri Krishna had more than one lakh and eighty thousand sons. But the best of them was Pradyumna and Pradyumna’s son Aniruddha.

Usha (Banasura’s daughter) once met Parvati Devi and Sri Shiva. Usha asked Parvati Devi who her husband would be.

Parvati Devi replied that in the month of Vaishakha a person will appear in Usha’s dreams. And this person will be her husband.

As promised by Parvati Devi, Usha did saw a person in her dreams. 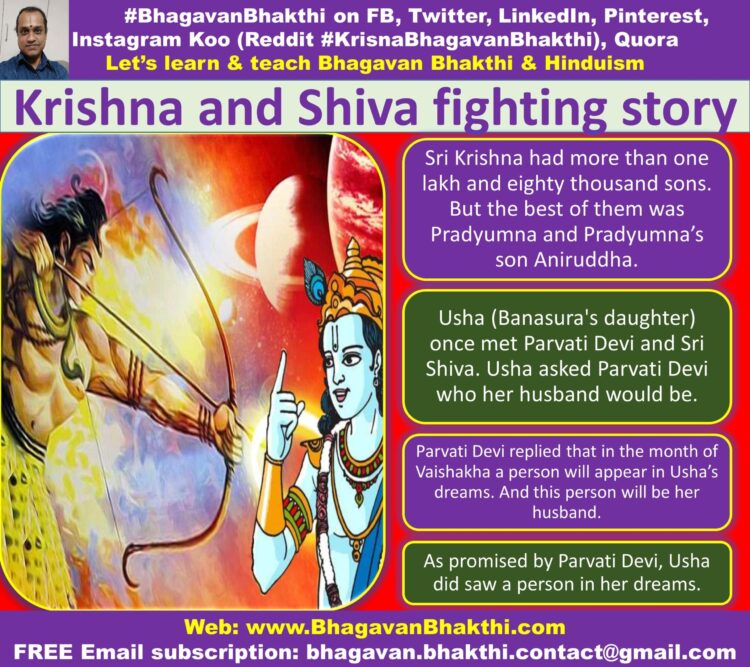 But Usha did not know how this person was. Usha told her friend Chitralekha about this.

Chitralekha thought that the only way to find out was to show Usha the portraits of various important personages amongst the Devas, Gandharvas, asuras etc.

But the required person could not be identified from these portraits.

Usha was then shown the portraits of humans and immediately she identified Aniruddha.

Many years ago, Banasura had prayed to Mahadeva (Lord Shiva), he had said, “please grant me fights. I have ten thousand arms. What will I do with all these arms if I don’t get a chance to fight?”

“Be patient,” replied Mahadeva. “One day you will find your flag lying broken. When that happens, you will get the opportunity to fight as much as you wish.” 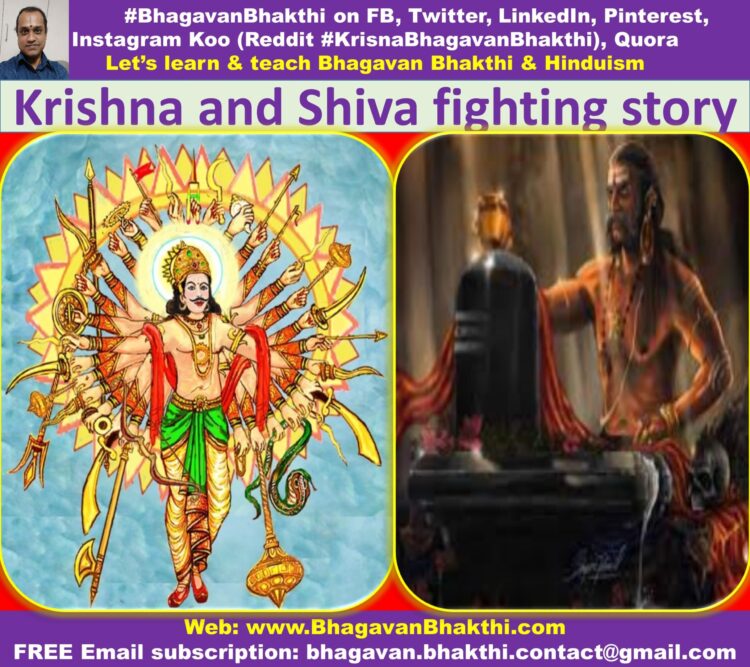 At this Banasura was very happy.

Meanwhile, once Aniruddha’s identity had been established, Chitralekha wondered what could be done. 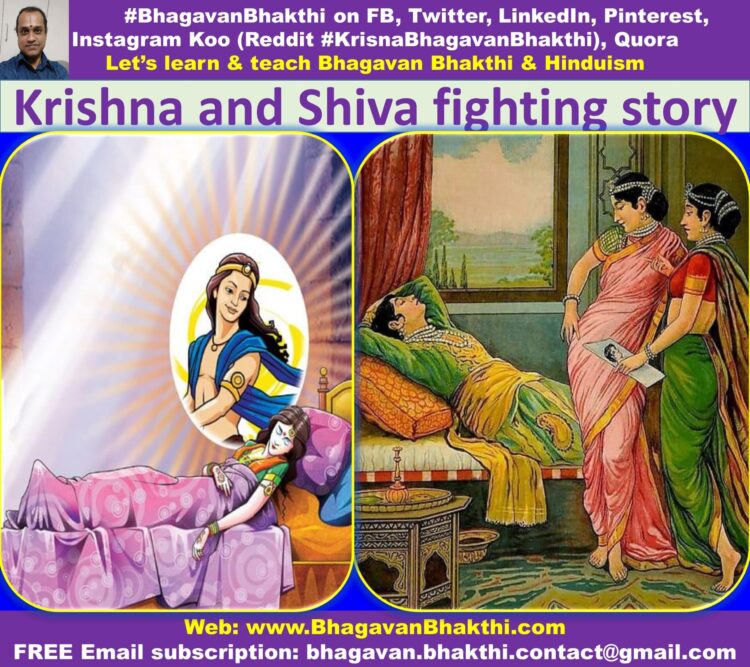 That was the very day on which Banasura found his flag lying broken.

The guards also came and informed Banasura, that Aniruddha was with Usha.

Banasura sent his soldiers to fight with Aniruddha, but Aniruddha killed them all with a club.

Then Banasura himself entered the fray.

Initially, Banasura was beaten by Aniruddha. But Banasura used Maya (tricks) to tie Aniruddha up.

Devarshi Narada went to Dvaraka and told the Yadavas this.

So Sri Krishna, Balarama and Pradyumna came to rescue Aniruddha.

Many soldiers were killed by Sri Krishna before entering Banasura’s city.

Also at the gate was a demon known as Jvara, a demon with a huge body, three arms and three legs.

This demon had been born out of Mahadeva’s body.

The demon was so powerful that it even caused Balarama some discomfort.

But Sri Krishna created a demon from his own body, which killed the demon Jvara.

Banasura himself came out to fight.

Mahadeva and Kartikeya fought on Banasura’s side. 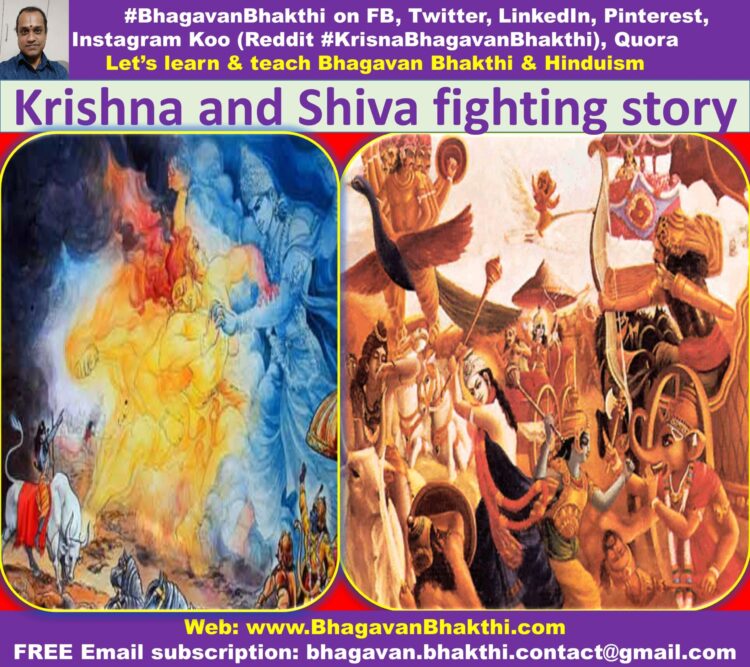 Terrible was the war between Sri Krishna and Mahadeva and everyone thought that the world would come to an end.

But Sri Krishna tired out Mahadeva.

Pradyumna defeated Kartikeya, and Balarama killed many of Banasura’s soldiers.

Sri Krishna and Banasura shot arrows at each other.

Then Sri Krishna took up this Sudarshana chakra and sliced of all Banasura’s arms. 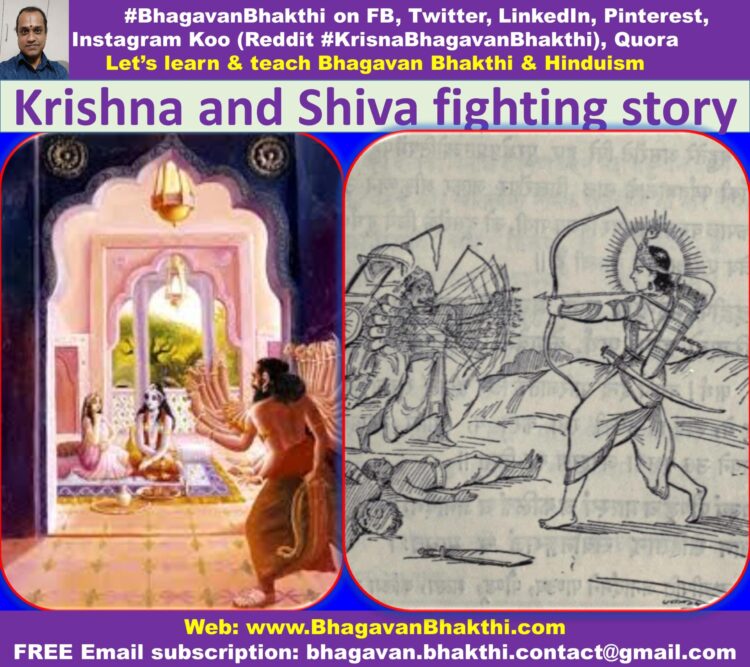 But when Sri Krishna was about to kill Banasura, Mahadeva intervened and begged for Banasura’s life.

This boon was granted by parama dayaalu (The God of mercy) Sri Krishna.

(Earlier Bhagavan Sri Vishnu in his Sri Narasimha avatar had promised his bhakta / devotee Prahlada, that he will not kill any of his family members.)

At the end of the war, Aniruddha and Usha too returned to Dvaraka with the other Yadavas. 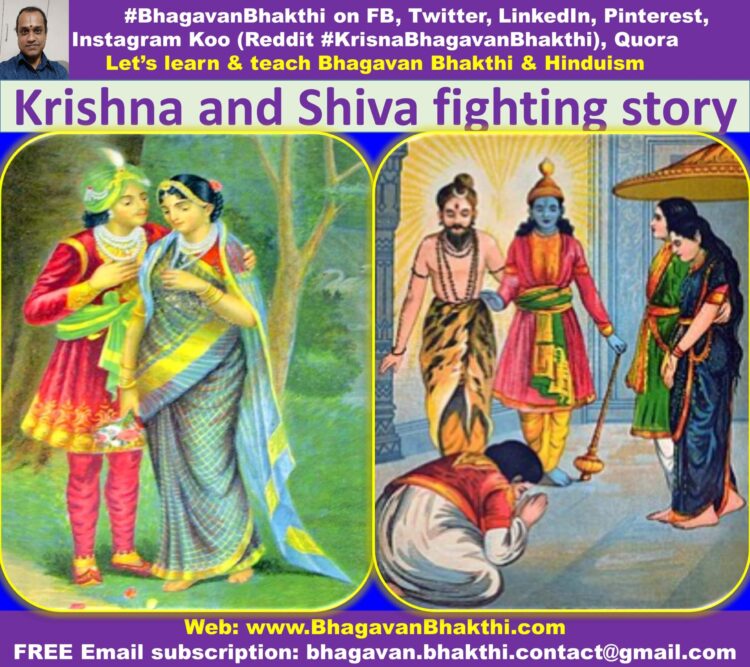 PS: We should note that this war is fought only to teach lesson to Vanasura (Banasura) and also to show that Sri Krishna / Sri Hari is Sarvottama / Supreme.

You can also learn more stories related to Krishna, Rukmini, Pradhyumna, Arniruddha etc from the below links: