What is Hindu (Vedic) measurement (units) of time information (facts)

Before knowing about “What is Hindu (Vedic) measurement (units) of time information (facts)“, let us know few basic information about related Hinduism facts. 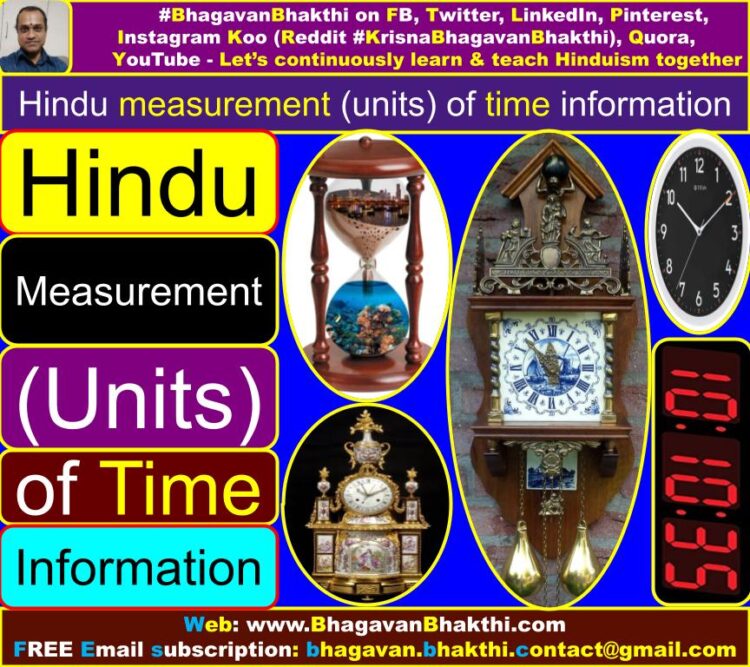 No one knows when the Hinduism (Sanatana Dharma) was started. Only Lord Sri Vishnu is aware of this.

Lord Sri Vishnu was the founder of Sanatana Dharma (Hinduism).

No one knows the birth day of Lord Sri Vishnu as he never took the birth and he doesn’t has the end.

Goddess Sri Parvati Devi, Lord Sri Indra Deva etc. are not at all aware about the existence of the Supreme Lord Sri Vishnu. 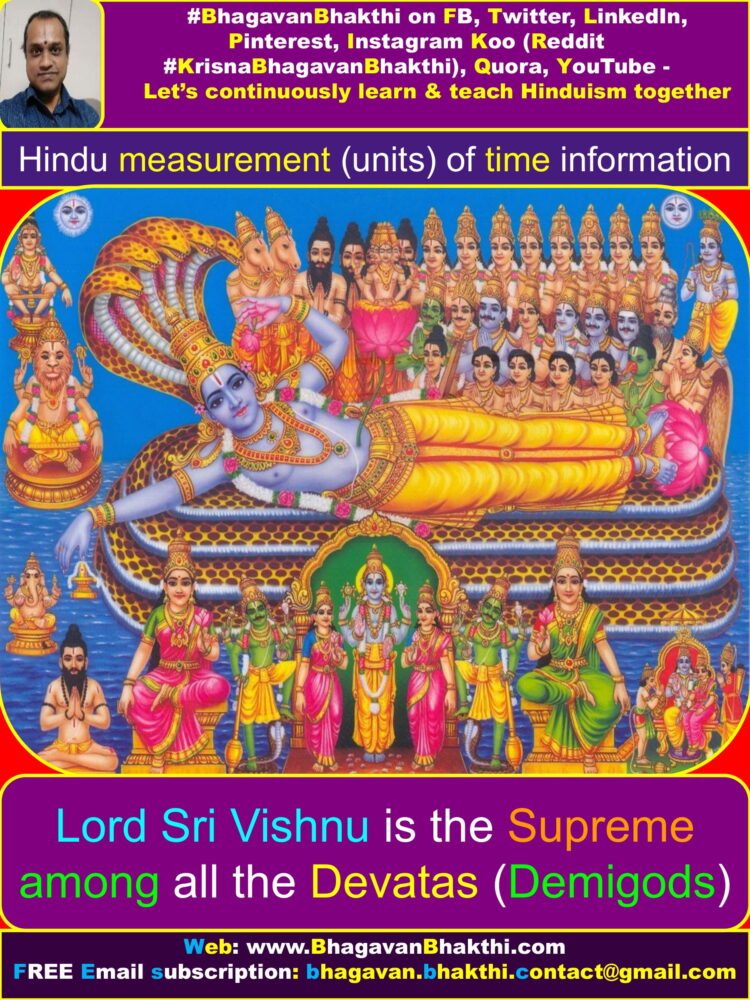 Now, let’s move to know about the “What is Hindu (Vedic) measurement (units) of time information (facts)“:

List of Hindu measurement (units) of time information (facts) is as given below:

Nimesha : The smallest unit of time is a nimesha; this is the amount of time it takes to blink. 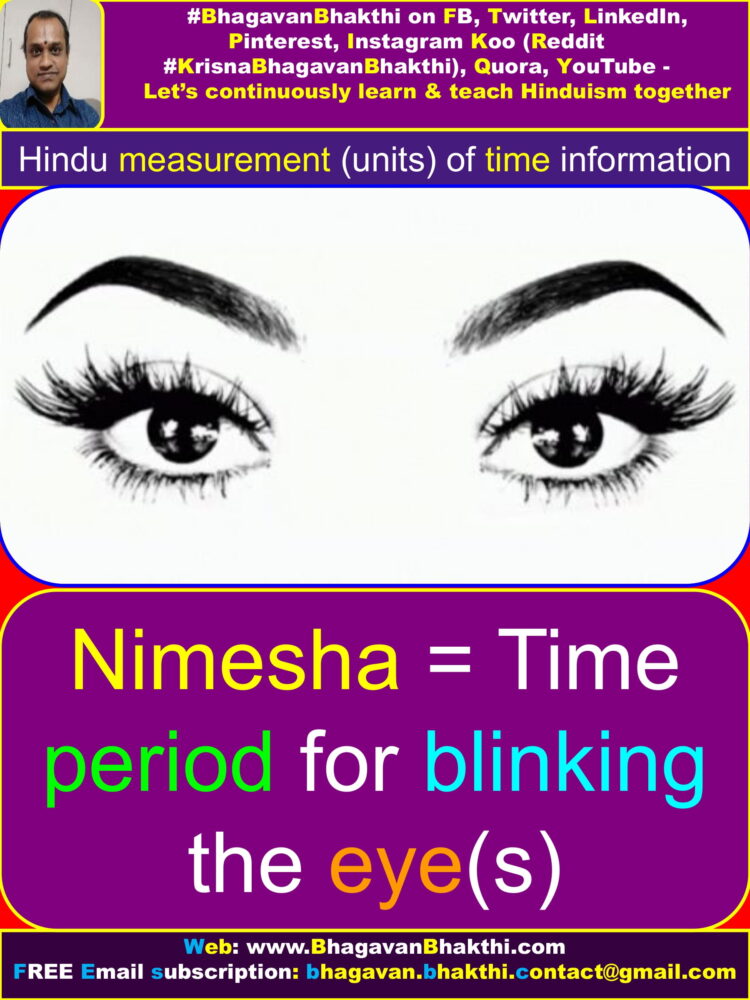 Kaala : Thirty kaalas make one muhurta (muhurat) and there are thirty muhurtas in one divaratra (one day).

(One Muhurta is 48 minutes as per today’s calculation. Thus there are 30 muhurtas in a day of 24 hours).

Humans one month : One month for humans is one day for the ancestors (pitrus).

From darkness towards brightness is called as Shukla Paksha (शुक्ल पक्ष). 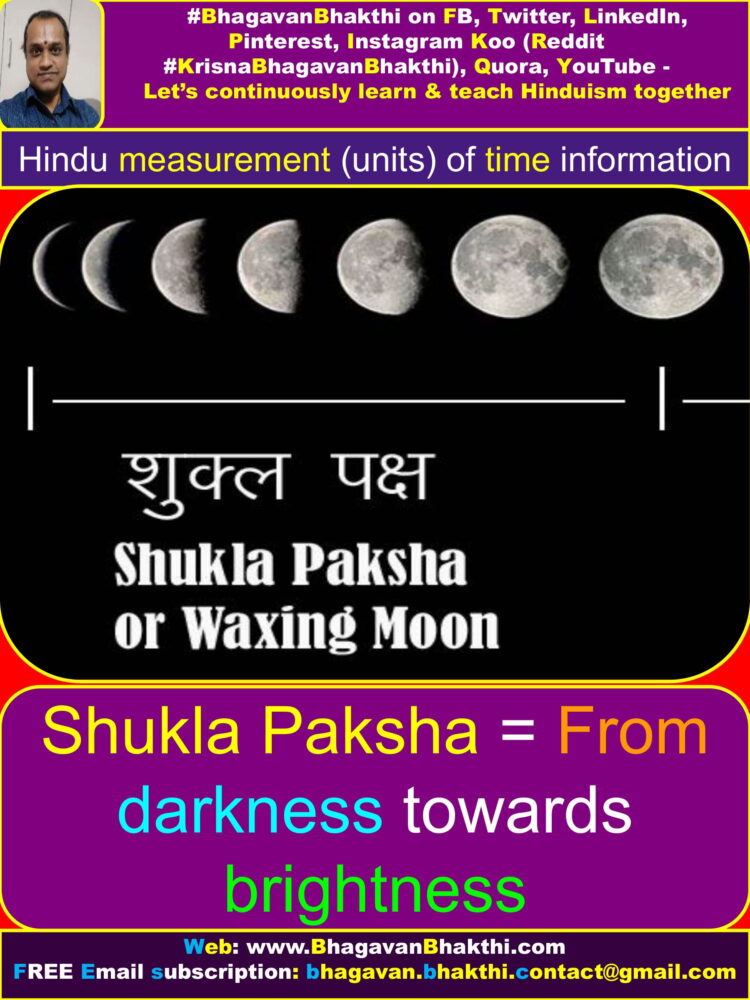 From brightness towards darkness is called as Krishna Paksha (कृष्ण पक्ष). 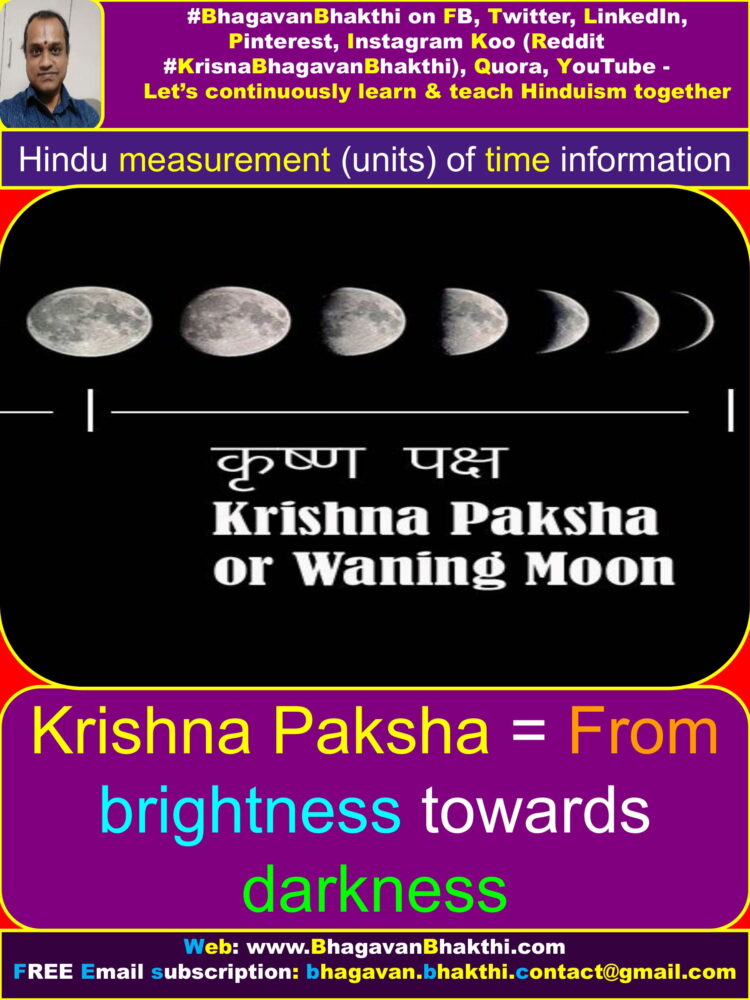 Divaratara : One human year is one divaratara for the Devatas (Demigods).

Ayanas : The human year is divided into two ayanas, each consisting of six months. These are known as uttarayana and dakshinayana.

Uttarayana : Uttarayana is one day for the gods. The Sanskrit word Uttarayana = Uttara + Ayana = Northward movement of the Sun on the celestial sphere. 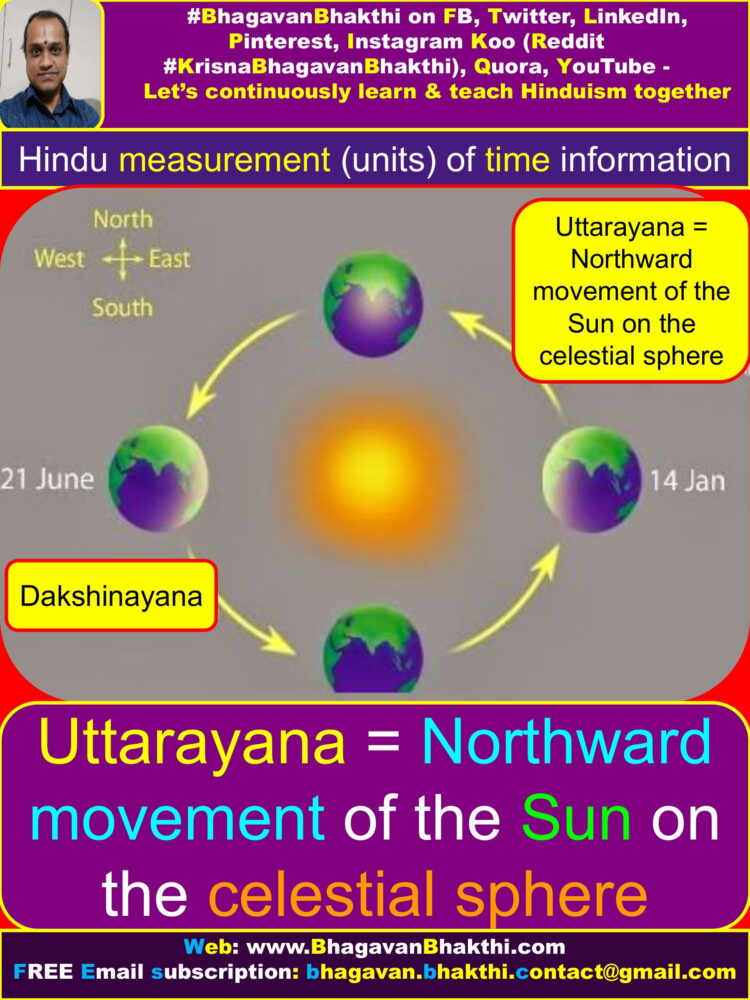 Dakshinayana : Dakshinayana is one night for gods. The Sanskrit word Dakshinayana = Dakshina + Ayana = Southward movement of the Sun on the celestial sphere. 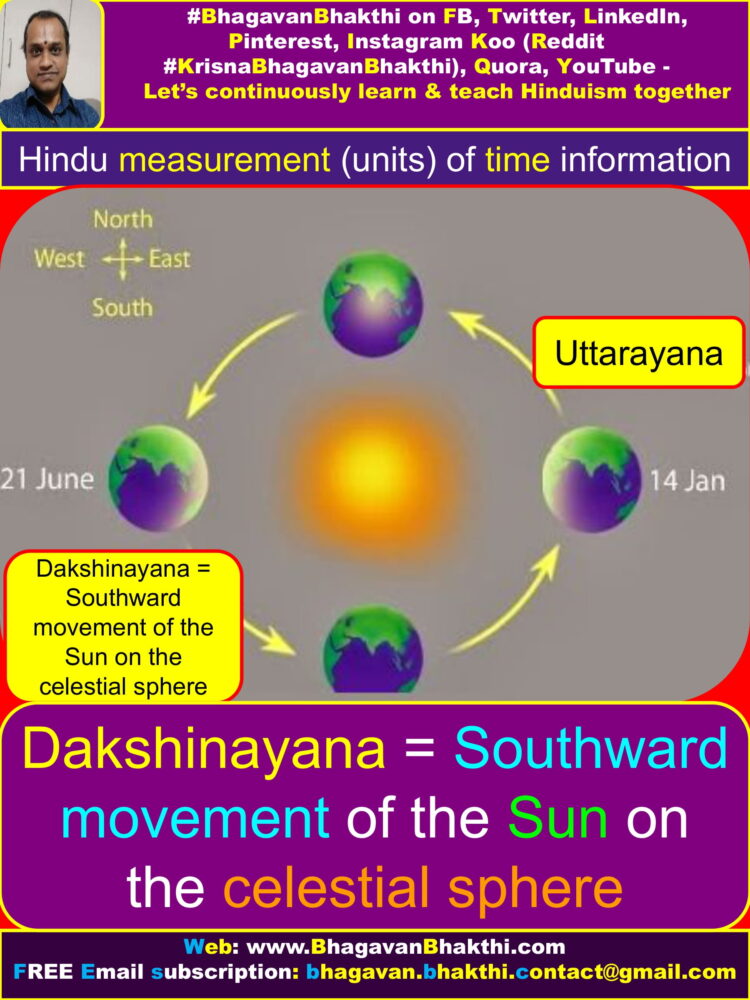 The lengths of these yugas are defined in terms of years of the Devatas (Demigods) as given below: 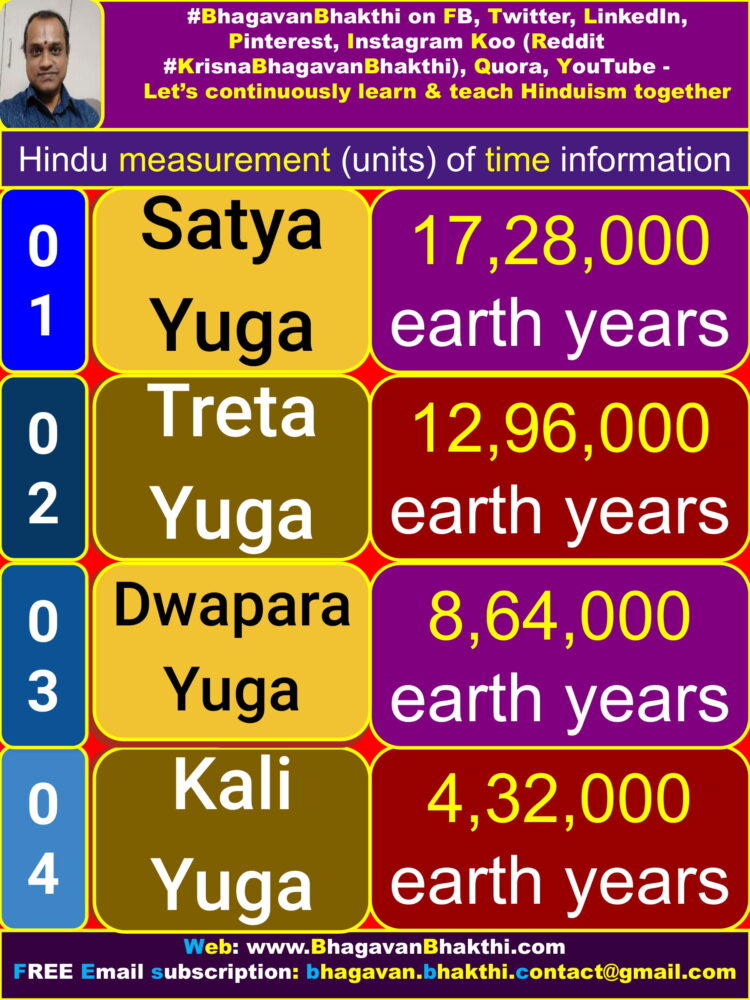 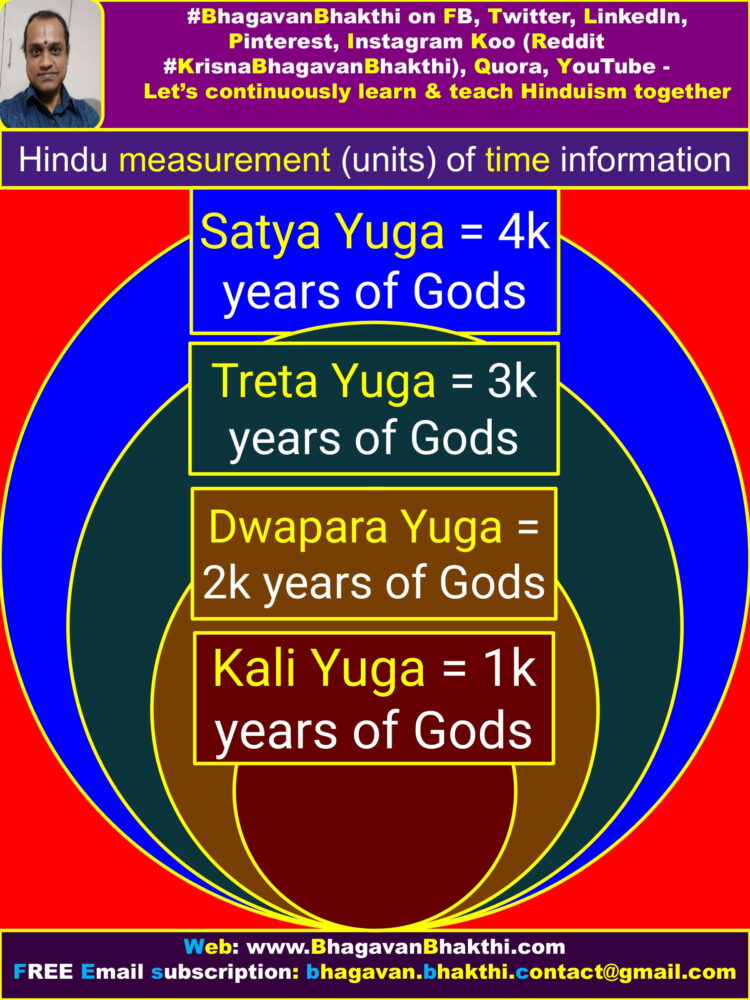 Maha Yuga : A cycle of Satya Yuga, Treta yuga, Dwapara yuga and Kali Kuga is known as a MahaYuga.

Thus, a MahaYuga would seem to consist of ten thousand years of the Devatas (Demigods). But this is not quite correct. 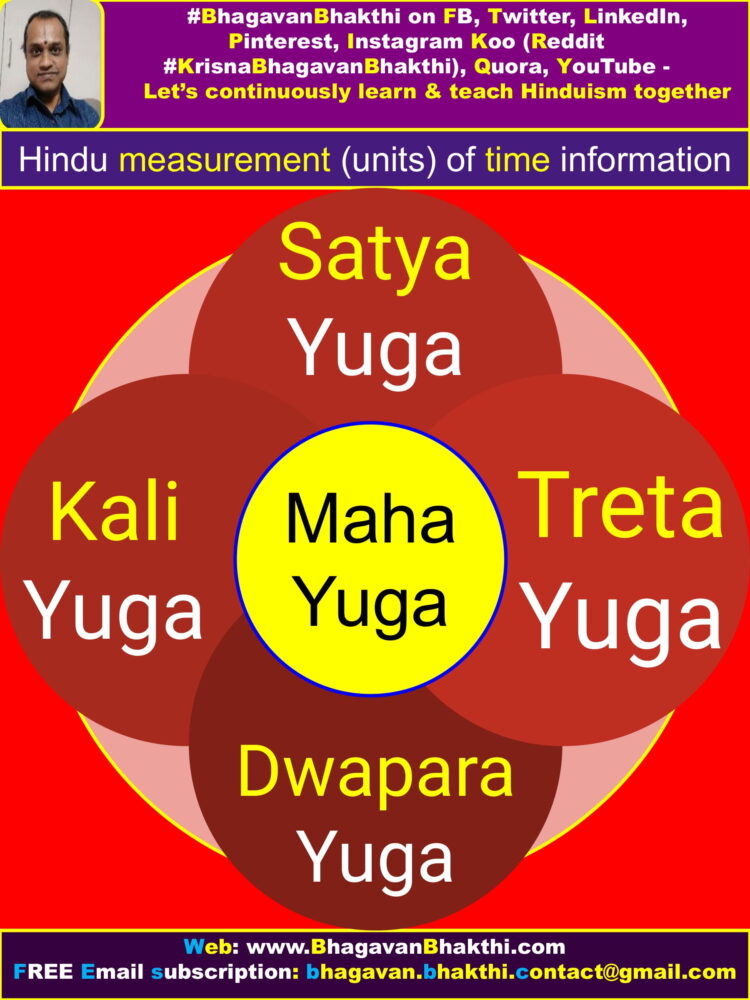 Sandhyamshas : In between any two Yugas are intervening periods, known as Sandhyamshas.

Once one adds the sandhyamshas, a Mahayuga adds up to twelve thousand years of the Devatas (Demigods).

[We should note that the years of earth / humans and Devatas (Demigods) are different.]

Manvantara : A little over seventy-one yugas constitute one Manvantara.

Kalpa : Fourteen such Manvantaras are one Kalpa. A Kalpa is merely one day for Lord Sri Brahma Deva (Brahma Loka or Satya Loka). At the end of Brahma’s day, the universe is destroyed. 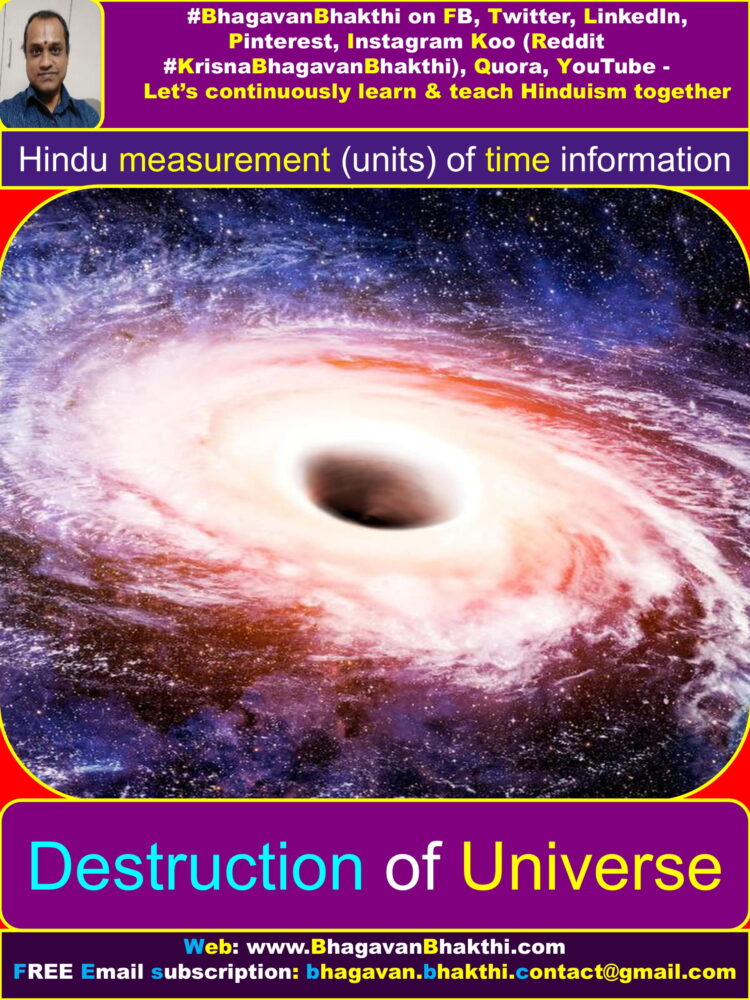 Then again later, a new and fresh Universe is when a new day dawns for Lord Sri Brahma Deva.

The Characteristics of the Yugas as one progressively moves down the scale from Satya Yuga (Krita Yuga) to Kali Yuga, the power of righteous diminishes and evil starts to triumph.

In Treta Yuga people were righteous. The system of varnashrama (Varna Ashrama) (4 Varnas in Hinduism) dharma goes back to Treta Yuga.

This is typified in the principle of four varnas (classes) and four ashramas (stages of life).

The four varnas are Brahmanas, Kshatriyas, Vaishyas and Shudras.

Each class has its proper place, each its assigned occupations as determined by the principles of division of labour. Varna in Hinduism has no relationship with the caste or color of the people 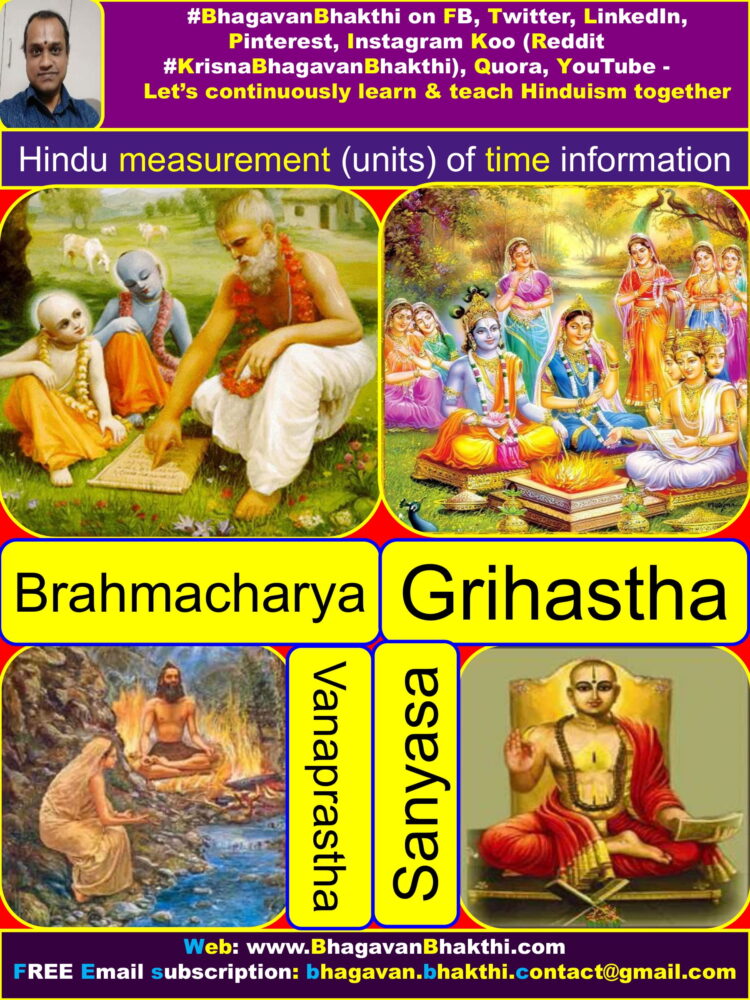 Everyone followed the tenets of Varnashrama (Varna Ashrama) dharma in Treta Yuga.

Individuals were equally handsome and equally wealthy. Poverty and disease were unknown.

The weather was clement and, initially, there was no need to build houses. Cities and villages were not known.

People lived freely in the mountains and on the shores of the oceans. But as people became evil, the weather turned inclement.

Houses had to built so the people might be protected from the heat and the cold. Cities and villages were planned and constructed. Evil became even more prevalent in Dwapara Yuga. 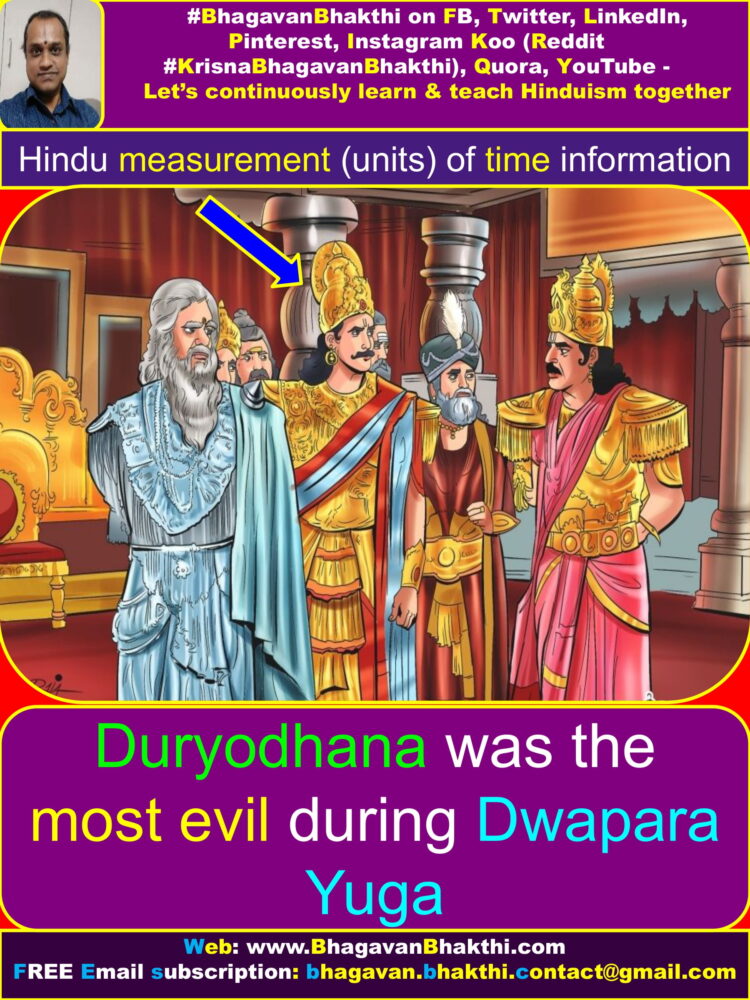 In some cases, individuals began to practice that which was against the dictates of Varnashrama (Varna Ashrama) dharma.

To bring men back to the righteous path (Dharma), the knowledge of the sacred Vedas had to be disseminated amongst humans.

To this end, the great Lord (Sage) Sri Veda Vyasa Ji (He is an avatar of Lord Sri Vishnu) divided the Vedas into four, that is, Rig Veda, Yajur Veda, Sama Veda and Atharvana (Atharva) Veda.

These include Ayurveda (medicine), Jyotisha (astronomy) and Arthashastra (economics). 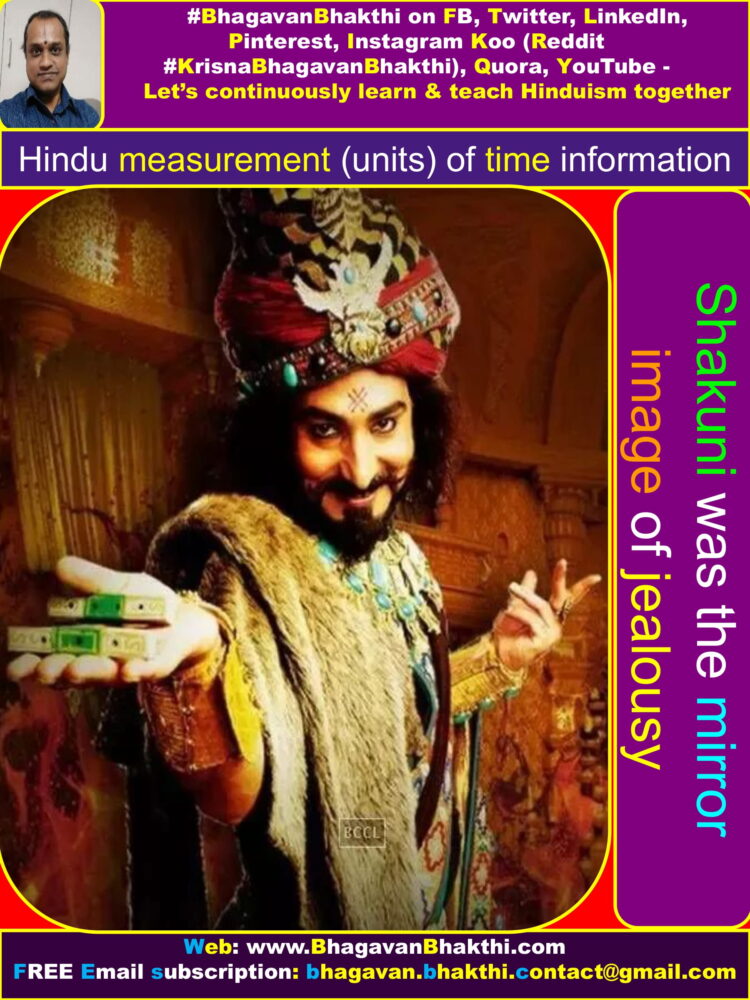 Individuals did not stick to their own classes (Varna) while marrying, and cross-breeds started to be born.

But some remnants of righteousness (Dharma) could still be found, so that average life expectancies amounted to two thousand years.

Kali Yuga is the worst of the four eras (Yugas). Theft, hatred, falsehood, fraudulence and egotism become the norm.

As a natural corollary to such evils, drought and famine recur again and again.

Even the brahmanas are led astray. They do not study the Vedas, nor do they perform Yajnas.

The brahmanas degenerate so much that they mixed with Shudras. As for the Shudras, they become kings (Today’s politicians). Shudras even start to study the Vedas.

Evil always has its effect. Diseases becomes rampant and life expectancies go down. 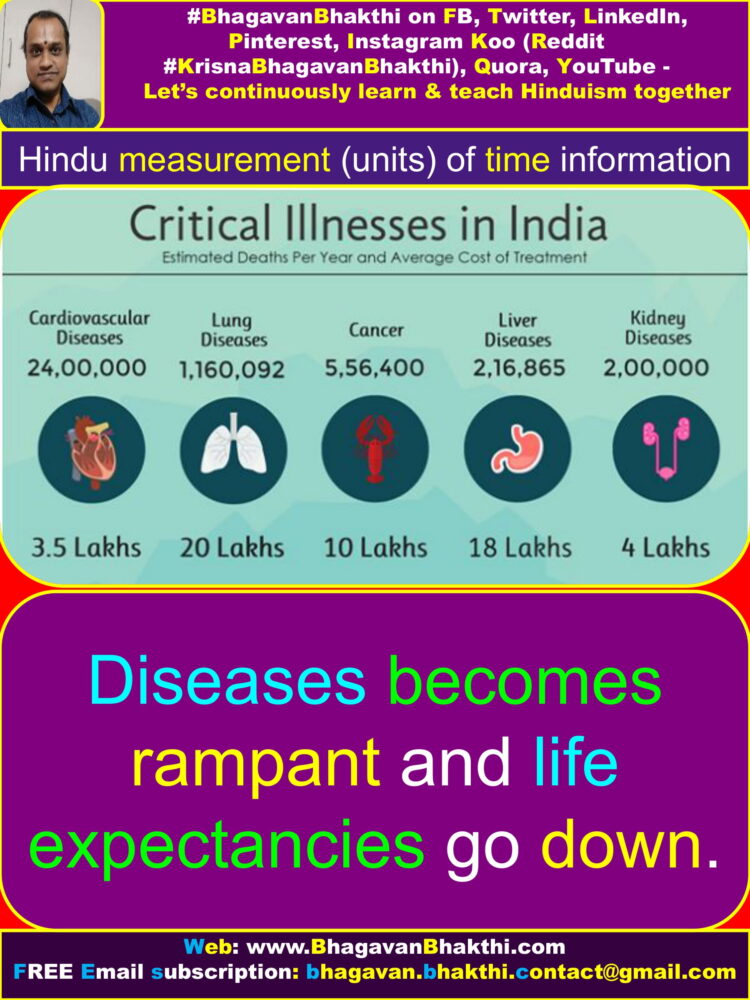 To know “when the Great Sanatana Dharma / Hinduism started“, you can click on to the below link:

When was Hinduism Sanatana Dharma started