Namaste friends, how are your doing today? Bhagavan Sri Vishnu and Lord Shiva blessings to you and your family!

Taraka (Son of Vajranga and Varangi) was hell bent upon defeating the gods. But he realize that, prior to waging war on the gods, he would have to become powerful. Such powers could not be attained but through tapasya.

Taraka went to the Pariparta parvata and selected a cave there for his meditation.

For some days Taraka ate nothing, for some more days he survived only on water, and on other days he ate only leaves,

Every day he sliced off some flesh from his body and offered it to the fire as a token of his devotion. All these hardships pleased Brahma and he appeared before Taraka. 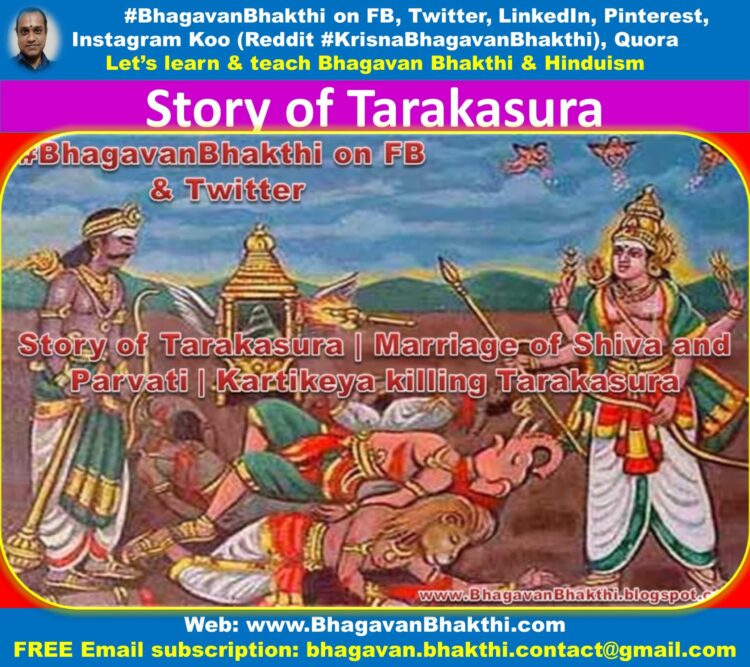 “Enough is enough,” said Brahma. “I am pleased at your devotion. What boon can I grant you?”

“I want to fight with the gods,” replied Taraka. “The gods have been giving the demons a hard time and I intended to reverse the tide. Please grant me the boon that I may be invincible and immortal.”

“Immortality is not a boon that can be granted to any living being.” Said Brahma. “All living beings must die. But if you want, set fairly difficult conditions for your death.”

“In that case, please grant me the boon that I can only be killed by a seven year old child of the Lord Shiva,” requested Taraka.

The War Between the Gods and the Demons 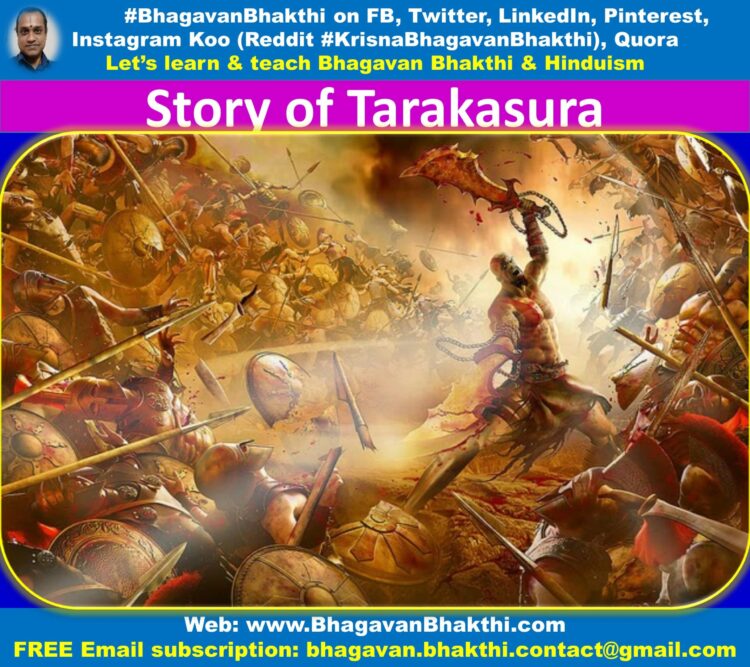 Fortified with Brahma’s boon, Taraka started to rule the demons.

After some years had passed and after Taraka had raised a strong army, he decided to attack svargam.

A huge army of demons was accordingly raised. There were thousands of elephants, horses and chariots in the army.

Apart from Taraka, the major generals in the army were Jambha, Kujambha, Mahisha, Kunjara, Megha, Kalanemi, Nimi, Mathana, Jambhaka and Shumbha, Diverse were the weapons that the demons armed themselves with.

The gods also prepared themselves for the war, having first appointed Yama as their general. Yama rode into battle on a buffalo.

The fire-god Agni rode on a goat and Varuna, the lord of the oceans, rode a snake.

Amongst the other gods who were in the army were Chandra, Surya and Kubera, the god of prosperity and wealth.

The war was terrible to behold. The trumpeting of elephants, the neighing of horses and the beating of drums made a terrible racket.

Above all this there was the noise of weapons clanging and bows twanging. 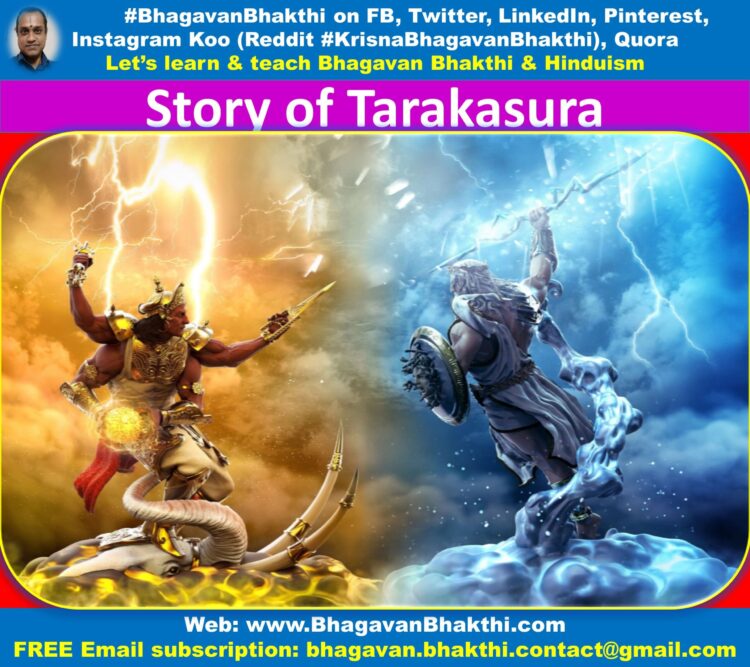 The sky was thick with spears, maces, axes, swords, tridents, clubs and arrows flying around. Dead bodies littered the battlefield and rivers of blood began to flow.

Yama fought a fierce duel with a demon named Grasana and Kubera fought with Jambha. Kujambha also fought with Kubera and put Kubera to flight. Kalanemi fought with both Chandra and Surya.

The two Ashvinis received a sound thrashing at Kalanemi’s hands.

The news that the gods were being slaughtered reached Vishnu and Vishnu joined the fight.

The demons immediately attacked Vishnu, but were no match for him.

Jambha did manage to knock Vishnu unconscious with a club. But Indra slew Jambha with a divine weapon.

The trouble however was with Taraka. When he came to fight, the gods had no option but to flee.

Those who did not flee were captured and imprisoned. The demon won a resounding victory. 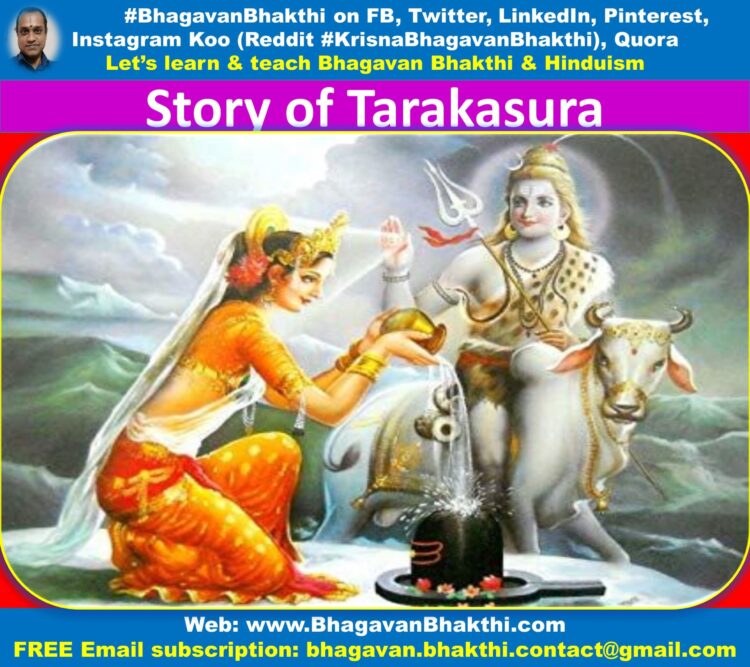 Those of the gods who had survived the battle and were still free started to pray to Brahma.

“What can I do for you?” asked Brahma. Why are all of you looking so despondent?”

“You are the one who is responsible for our misfortune,” replied the gods.

“You have granted Taraka a boon that has made him virtually invincible. Armed with this boon, he is oppressing the universe and has soundly thrashed us. What are we to do now?”

“There is no cause for such despondency,” said Brahma.

“Taraka is not immortal. He will be slain by a seven year old child. Unfortunately that child has not yet been born.

He will be the son of Shiva. The problem is that Shiva is unmarried. He was earlier married to Sati Devi, but Sati Devi immolated herself at the time of a yajna. She has now been reborn as Parvati Devi.

The task at hand is to get Shiva and Parvati Devi married. Their son will kill Taraka.”

It was necessary to make Shiva fall in love with Parvati Devi.

Madana / Kaama Deva, the god of love, was sent by Indra to Shiva’s hermitage so that this might be achieved.

But because this disturbed Shiva’s meditation, Shiva burnt Madana up.

Meanwhile, Parvati Devi had begun to perform tapasya so that she might have Shiva for a husband.

For one hundred years more, she ate only one leaf a day. And for the final hundred years, she meditated fasting. 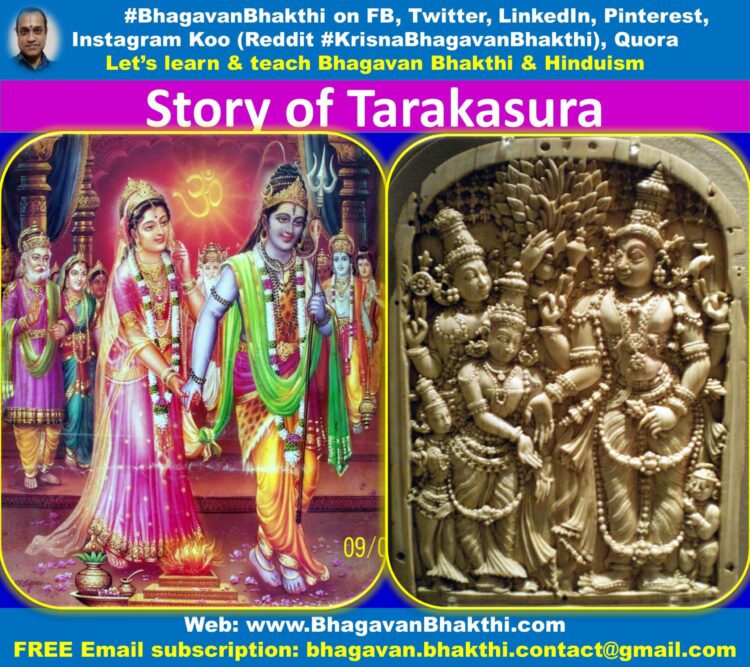 The marriage took place amidst a great deal of fanfare.

All the rivers and the mountains came to attend the ceremony. So did the sages, the gods, the gandharvas, the apsaras and the yakshas.

Brahma himself acted as the priest for the marriage ceremony.

On one particular occasion, Shiva addressed Parvati Devi as “Kali.”

The word kali means dark and Parvati Devi thought that Shiva referring to her dark complexion.

She did not realize that Shiva was merely trying to tease her a bit.

Greatly incensed at the imagined slight, Parvarti Devi decided that she would meditate so that she might become fair. She wore clothing made of barks of trees and performed tapasya.

Sometimes, she ate only roots and fruits. At other times, she fasted. Prior to leaving for her tapasaya, Parvati Devi had instructed Nandi that he was to stand guard at Shiva’s door and permit no other woman to enter.

There was a demon named Adi. This person had performed a lot of tapasya and had manage to please Brahma.

When Brahma agreed to grant him a boon. Adi asked for the boon of immortality. 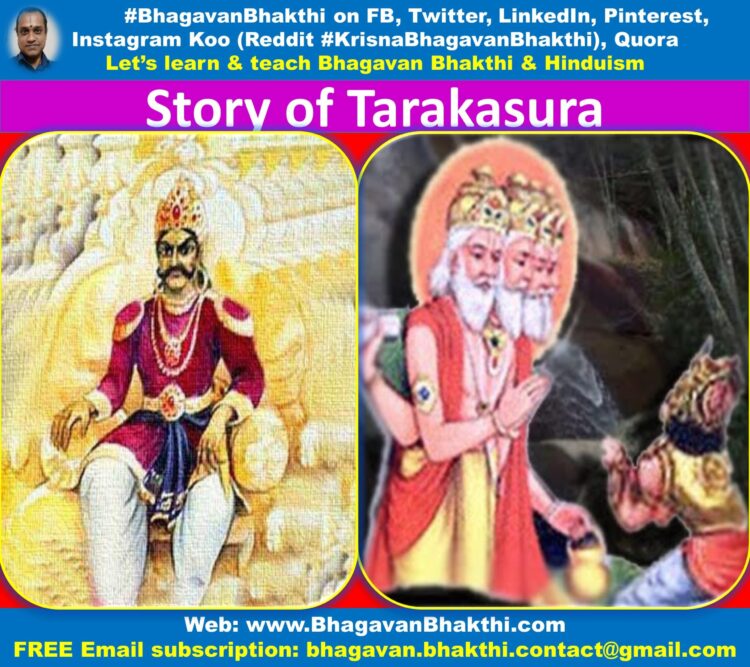 Brahma naturally refused this boon. He however granted Adi the boon that the demon would die only when he changed his form twice, not otherwise.

Adi happened to come to Shiva and Parvati’s house and discovered Nandi standing guard at the door.

Wondering what there was to be guarded, he adopted the form of a snake and slithered in. Nandi did not notice the snake, but this was Adi’s first transformation.

Inside the house, Adi encountered Shiva and thought that he would play a trick on Shiva. He adopted Parvati’s form.

This was his second transformation. In the form of Parvati, Adi went up to Shiva and greeted him. Initially, Shiva did not realize that this was not Parvati Devi. He greeted the demon and said:

“Darling, I am delighted that you have returned. I can see that your rage has cooled down.” But in a little while Shiva realized that this was not Parvati Devi. He slew the demon.

Meanwhile, Parvati Devi was continuing with her tapsaya and pleased Brahma with her prayers. Brahma granted her the boon that she would become fair.

Brahma requested the goddess Koushiki to go and live in the Vindhya mountains. She is therefore also known as Vindhyavasini.

(According to the Markandeya Purana, Koushiki emerged from Parvati’s cells when Parvati was engaged in fighting the demons Shumbha and Nishumbha.)

Kartikeya or Skanda was born after some days. The boy shone with the radiance of a thousand suns and had six (shata) faces (anana). He was therefore also known as Shataanana. 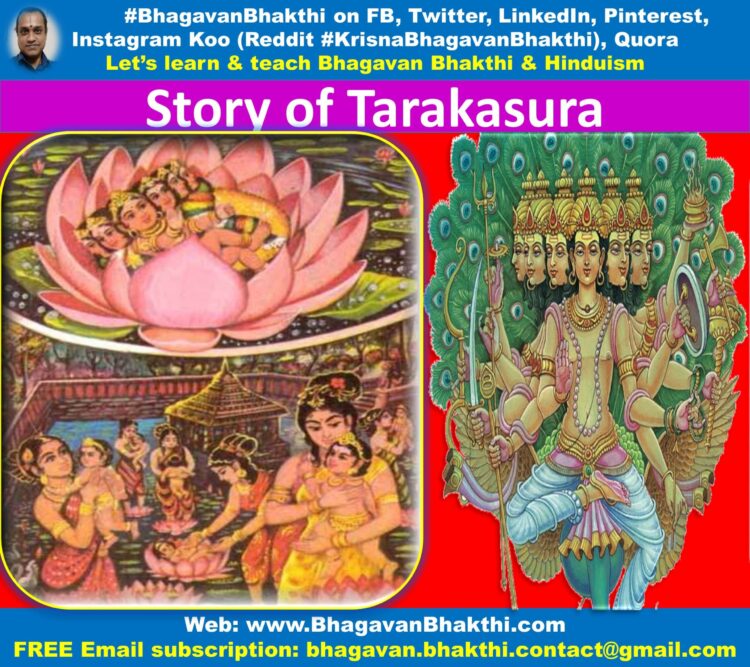 (Some other Puranas like the Brahmavaivarata Purana state that Skanda got lost when he was small and was brought up by the Krittikas. That is how he acquired the name of Kartikeya. The Krittikas were goddesses, also identified as stars (the Pleiades)).

The gods armed Kartikeya with diverse weapons and appointed him their general.

They requested him to kill the demon Taraka and arrangements were made for the battle.

When Taraka saw Kartikeya he said, “What is a boy like you doing in a battlefield? Go and play with a ball instead.”

A battlefield is not the place for idle talk,” replied Kartikeya. “Show me your prowess instead.”

At these words, Taraka flung a club at Kartikeya. But Kartikeya easily repelled the club with a vajra. The demon next hurled an axe, but Kartikeya effortlessly caught the axe in his hand.

He then struck the demon with a club of his own. This angered Taraka so much that the demon showered all sorts of weapons on Kartikeya.

But the boy repelled all of these and started to kill demons with his own weapons.

Many demons fled in dismay. As for Taraka himself, Kartikeya’s spear pierced him in the chest and killed him.

Thus it was that Brahma’s boon became true.

While the deities hailed the glory of Kartikeya for having killed Tarakasura, Kartikeya himself was saddened by his act. He told the deities–

‘I regret for having killed Tarakasura because he was a great devotee of Lord Shiva. Is there any way to atone for my sin?’

‘Killing a wicked person, who nourishes himself on the blood of innocent people, is not a sinful deed. But, still, if you feel guilty then there is no better way to atone for your sin than worshipping Lord Shiva.

Later on Kartikeya installed these Shivalingas at three different places and worshipped them with appropriate rituals.

In course of time these three holy places came to be known as Pratigyeshwara, Kapaleshwara and Kumareshwara.

Kartikeya, while worshipping at Kapaleshwara sprinkled holy water on the Shivalinga and prayed so that Tarakasura’s soul rested in peace.

He also offered sesame seeds to lord Kapaleshwara and prayed —

‘May my offerings made in the form of sesame seeds reach Taraka–the descendant of Sage Kashyapa.’

This way, Kartikeya was absolved of his sins.

A demon named Pralamba had escaped unharmed in the battle fought between the deities and demons, where the Tarakasura was killed by Skanda.

As the deities were busy installing Shivalingas at different places, Pralamba started to torment their families in their absence.

The deities got this information from Kumuda who appeared at the time when the deities were digging up a reservoir near ‘Siddheshwar’ temple.

All the deities requested Kartikeya to do something. Kartikeya released his fiery weapon, Shakti in the direction of Pralamba.

Shakti pierced the heart of earth and went right up to Paatala loka where Pralamba lived with the surviving demons.

All the demons were killed within few moments. A long tunnel had been created as the impact of Shakti’s penetration of the earth.

This tunnel was later on filled up with the water of Paatala Ganga and became famous as ‘Siddha-koopa.’