What are Kedar JyotirLinga unknown facts (Nara and Narayan story)

The fifth of the jyotirlingas is Kedara. In one of Bhagavan Sri Vishnu’s avatar, he revealed himself as Narayana and Sri Shesha Deva as Nara.

These two sages prayed for a long time in the hermitage known as Badrikashrama.

Near this hermitage there was a peak of the Himalayas named Kedara.

After the two sages had prayed to Lord Shiva for a very long time, Lord Shiva appeared and said, I don’t understand why the two of you worshipping me. 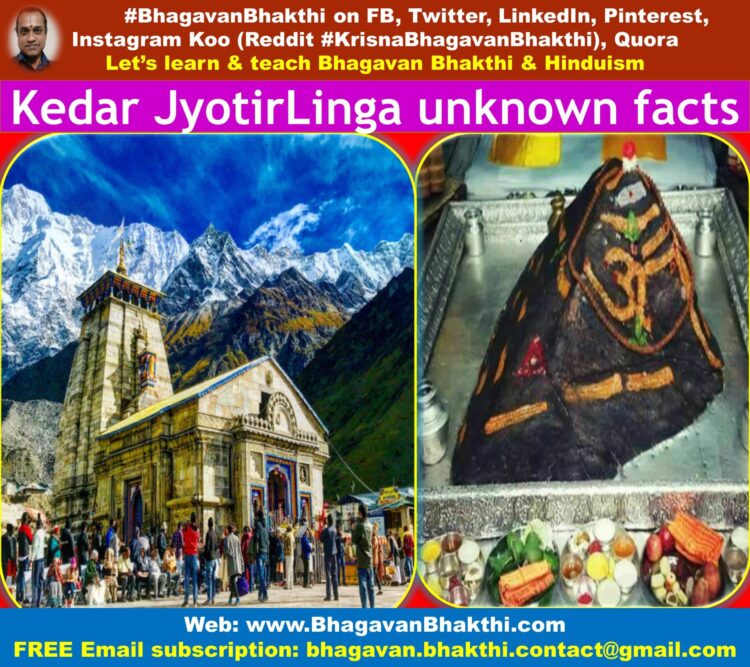 It is you who should be worshipped. But since you have been praying to me, let me grant you a boon.

Nara and Narayana desired that Lord Shiva should always be present in the form of a Linga on the peak Kedara.

‘How did this Badarikashrama (a place called Badari + ashrama) sacrosanct place originate? Who is the presiding deity of this place?’

‘Badrikashrama is an eternal city and Bhagavan Sri Narayana is its presiding deity. A mere sight of Badrikashrama is enough to free a man from all the bondage of life. There are numerous other holy places situated in the vicinity, Kedaranatha being one of them.’

To emphasize the significance of Badrikashrama, Lord Shiva narrated the following tale to Kartikeya:

‘In Satyayuga, Bhagavan Sri Maha Vishnu existed in his physical form at Badrikashrama for the benediction of human beings.’

‘But, in Tretayuga, only Rushis / sages had the privilege of perceiving him with the help of yoga.’ 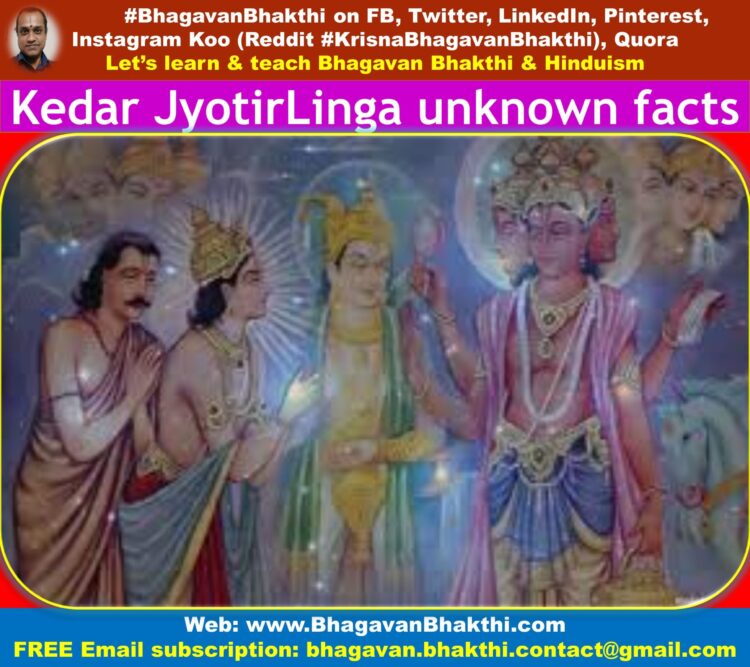 ‘Bhagavan Sri Maha Vishnu told Sri Brahma Deva that the main reason why he disappeared from Badrikashrama was the flawed intelligence and arrogance of the deities.’

‘Sri Brahma Deva informed the deities whatever Bhagavan Bhagavan Sri Vishnu had told him. All the deities were ashamed of themselves and returned to heaven with long faces.’

‘Feeling pity on the deities, I (Shiva) disguised myself as a sanyasi and carried Bhagavan Sri Maha Vishnu’s idol from Naradateertha to Badrikashrama and installed it over there to uplift the sagging morale of the deities.’

‘This is how Bhagavan Sri Maha Vishnu once again graced Badrikashrama with his presence.’

‘Even a grain of ‘prasada’ had at Badrikashrama is enough to liberate a man from all his sins.’ 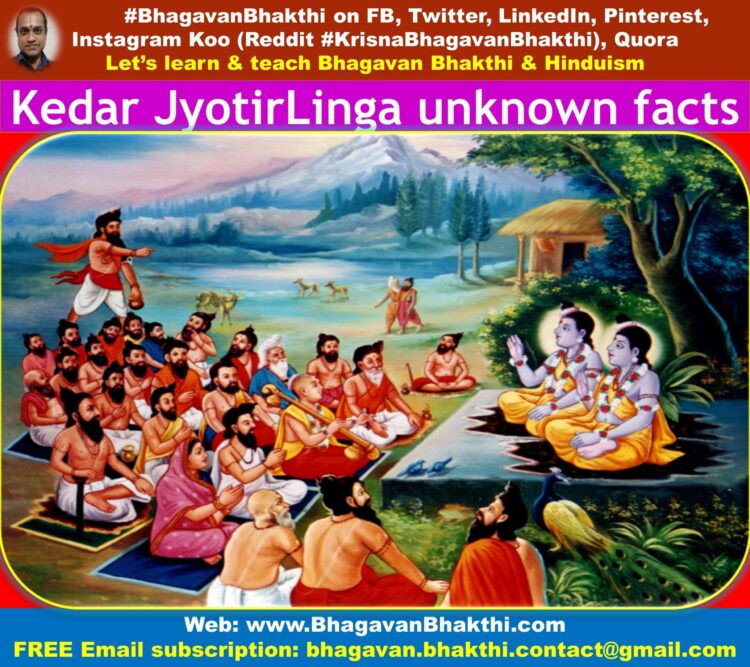 This is the very place where even today Sri Hari in his Sri Nara Narayana avatar still exists.

Even in the Treyayuga, Sri Aadi Shesha Naaga in his Sri Lakshmana avatar had taken birth along with Sri Rama Chandra Prabhu to do seva of Sri Rama.

In the Tretayuga, Sri Aadi Shesha Naaga in his Sri Balarama avatar had taken birth along with Sri Krishna Paramaatmaa to do seva of Sri Krishna.

Similarly in the Kaliyuga, Sri Aadi Shesha Naaga has taken the Sri Nara avatar to do the seva of Sri Narayana.

This avatar of Bhagavan Sri Veda Vyasa Ji is same avatar as during the Mahabharata period. 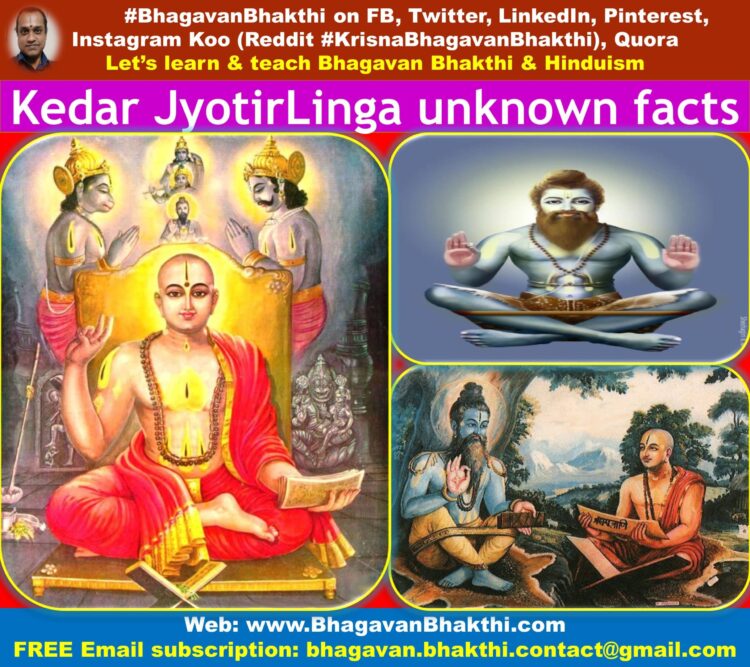 This is the greatness of our great Bharata bhoomi.

Svayam Bhagavan Sri Hari and other Devatagan / Demigods will take birth to uplift the common people.

This will go on and on and on…

Sanatana Dharma is called as ‘Dharma’, as it was started by svayam Sri Hari.

Whereas all the other religions which existed earlier or which is existing today and which will exist in the future are created by mere humans.

After every Maha Kalpa, a new and fresh Maha Kalpa starts and this will go on and on and on… 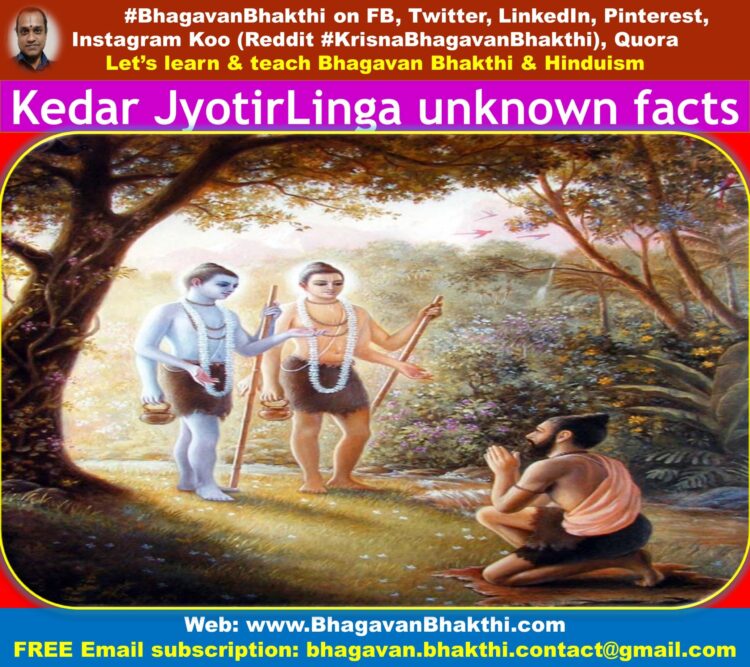 Everybody and everything changes except Sri Hari and Sri Mahalakshmi Devi.

Sri Hari is the Aadi Deva, he was present when nothing was there, he is present even today and also he will be present ever after.

Sri Mahalakshmi Devi is the greatest bhakte / devotee of Sri Hari and thus, She also stays along with Sri Hari for ever.

Sri Mahalakshmi Devi can’t go away from Sri Hari as she is the most dearest Devi of Sri Hari.

For this reason Sri Hari has kept Sri Mahalakshmi Devi in his Vaksha Sthala (I am not sure of the English word for Vaksha Sthala).

Because of our punya Karma, we have taken birth in this GREAT BHARATA Bhoomi.

We are not sure in the next januma / life, where we would take birth.

If we don’t make use of the present life, then we may have to pay in this life itself and / or in the next lives.

It is left to us to believe the GREAT SANATANA DHARMA which was started by svayam Sri Hari or to follow the mere religions which are started by the mere people to get fame, power etc.

This is left to us.

To know more about Maha Prayala, Great Tribulation or Qayamat as per Hindu Sanatana Dharma, you can visit this below link:

Maha Pralay or Great Tribulation or Qayamat meaning according to Hinduism