Just before moving towards to know about “List of pilgrimage places near Tirupati (Tirumala) (Venkatachalam hill)“, let us know few basic and important information. 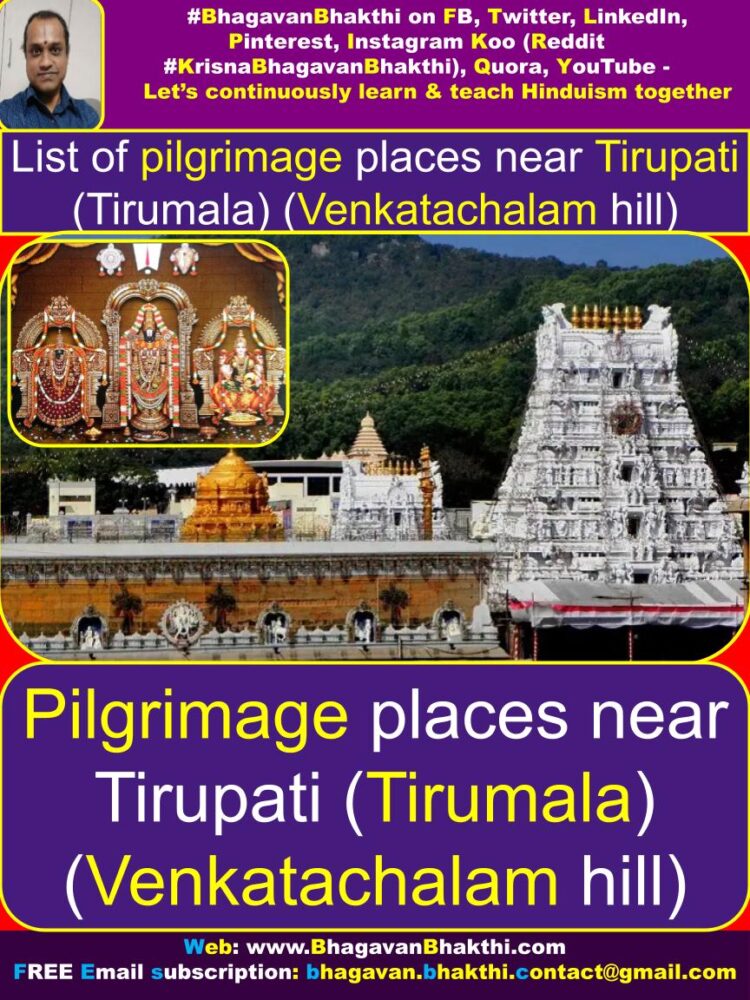 India is full of pilgrimage places. India (Bharat) is the most auspicious and divine nation on this earth.

From north Kashmir to south Kanyakumari and from west Gujarat to east Arunachal Pradesh, our great country India is filled with many pilgrimage places.

Tirupati is the place which is been famous since ages.

This is the same place where Lord Sri Vishnu in his avatar of Lord Sri Srinivasa (Venkatesha / Balaji) came to earth to get marry with Goddess Sri Padmavati Devi.

To witness the most divine marriage, all the Devatas (Demigods) and Devis (Demigoddesses) had arrived including: 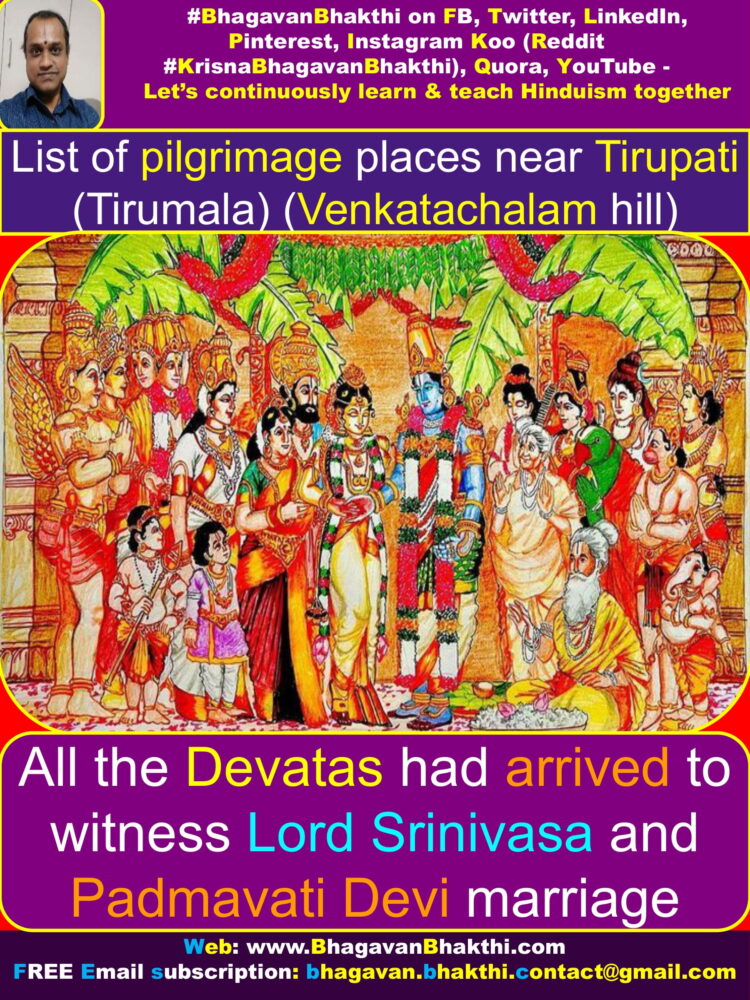 Now, let us look at the pilgrimage places which are located near Tirupati (Tirumala) (Ventachalam) mountain as per our Hindu Puranas.

List of pilgrimage places near Tirupati (Tirumala) (Venkatachalam hill) are as given below:

Krishna Teertham: Sutaji narrated a tale to all the assembled sages:

During ancient times, a brahmin named Ramakrishna did an austere penance at Venkatachalam hill (Today’s Tirupati). 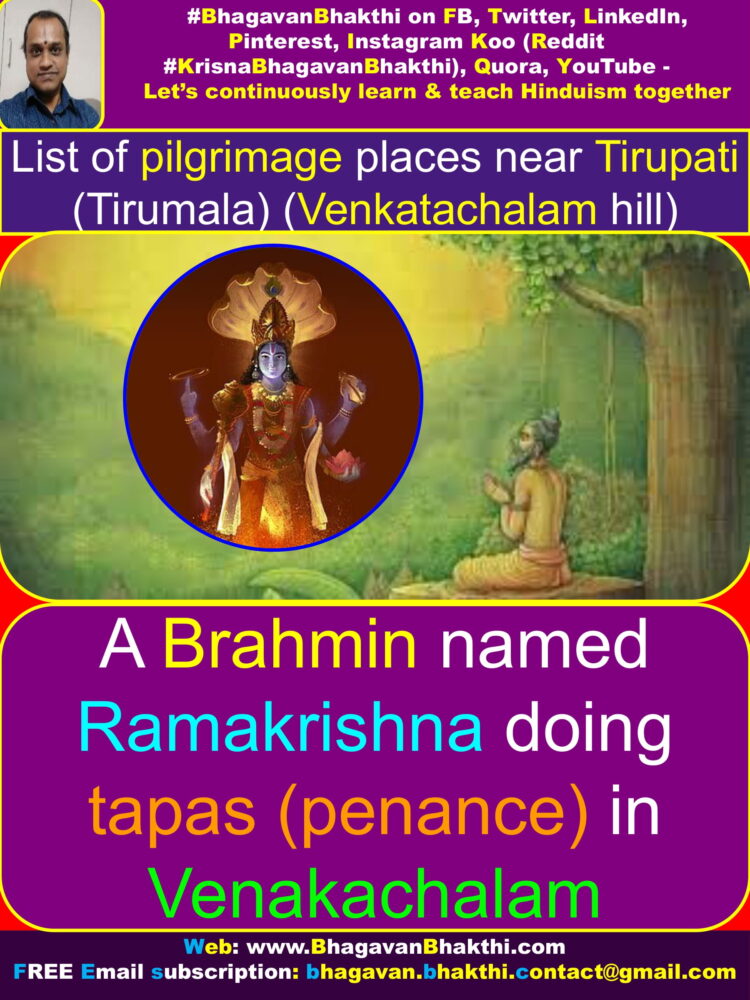 He remained immobile during the entire course of his penance resulting into the development of mole hills all over his body.

Indra was scarred by Ramakrishna’s penance and caused a heavy downpour for a week.

All the mole hills were washed away from Ramakrishna’s body.

Lord Srinivasa became pleased and appeared before him. He blessed Ramakrishna by saying: 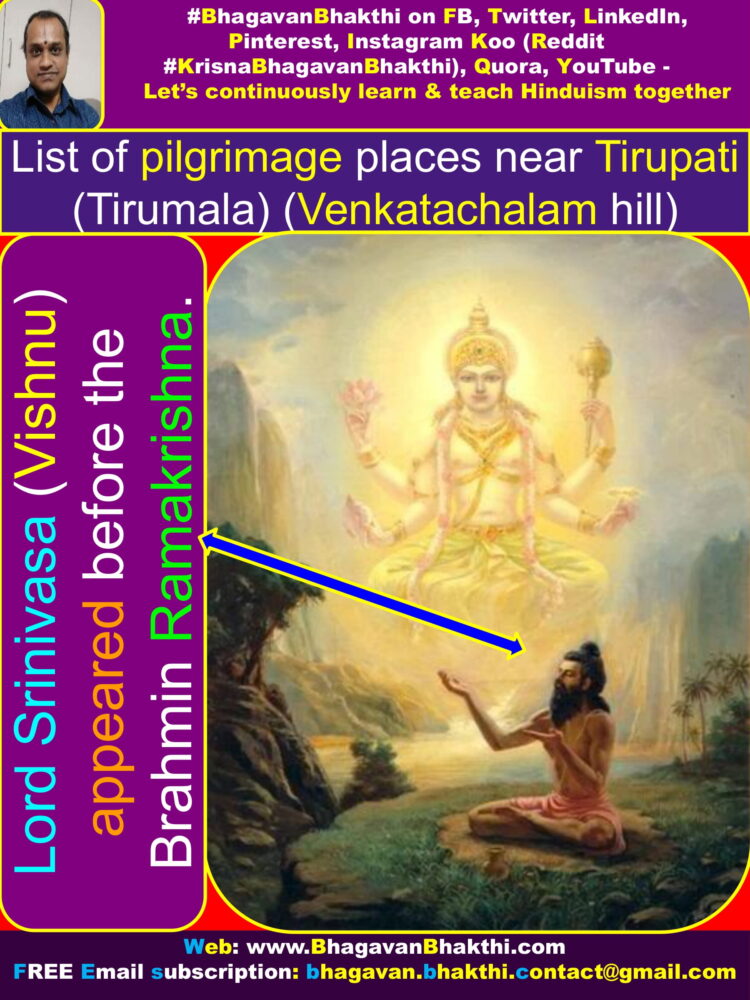 ‘This holy place, where you have performed a great penance will be named after you as Krishna teertham.’

‘Anybody who makes a pilgrimage to this place will be liberated from all the sins.’

‘A man, who has the good fortune of seeing the divine appearance of Lord Srinivasa even for a moment, attains salvation (Moksha) (The abode of Lord Vishnu – A place in Vaikuntha).’ 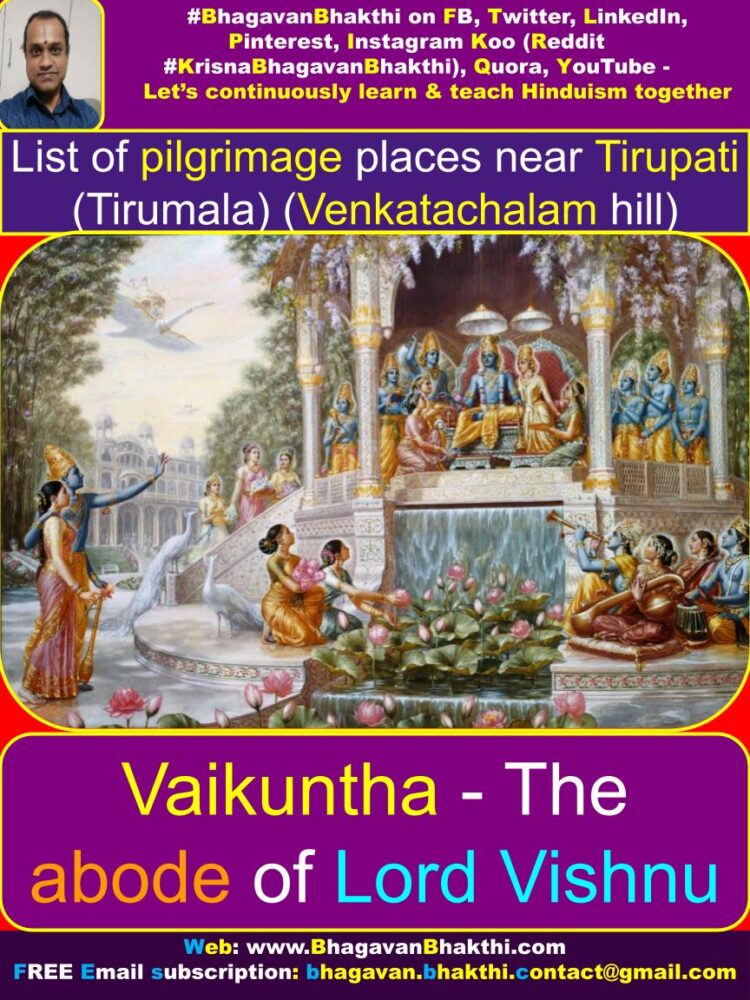 All the sages then requested Sutaji to tell about some other places of pilgrimage situated on Venkatachalam mountain.

Sutaji replied: ‘There are about one hundred and eight holy places situated on Venkatachalam mountain.’

Among all these holy places, six are considered to be capable of bestowing salvation:

Describing how Lord Vayudeva Deva had once assured Anjana and Kesari that he would take birth as her son, Sutaji told the sages: 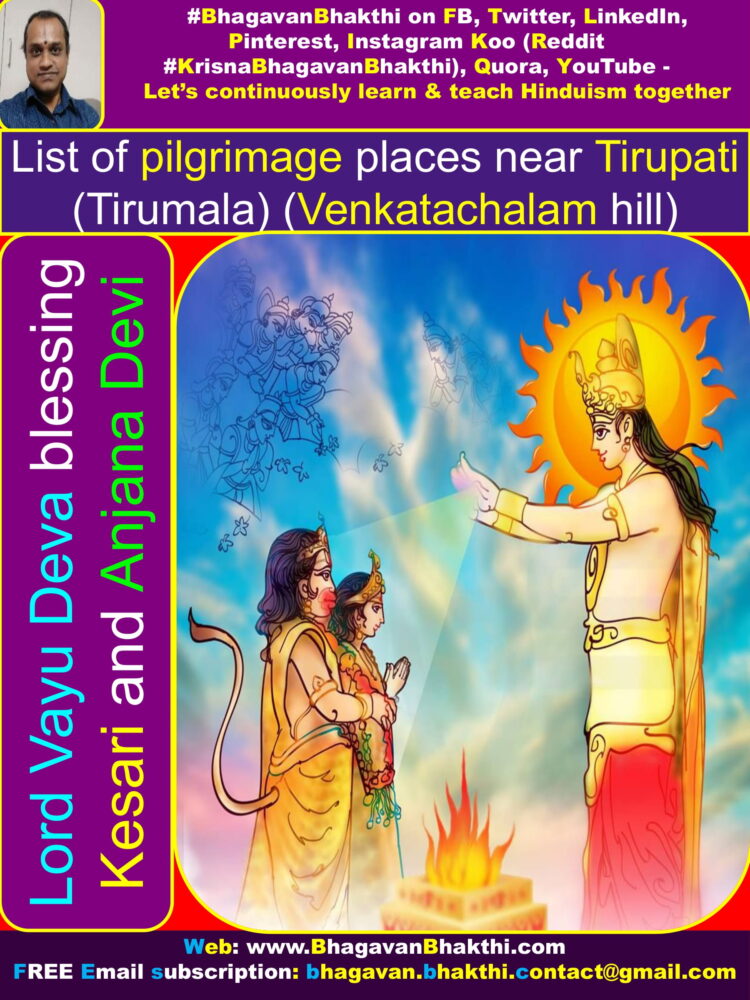 ‘Anjana, being issue less even after a long married life, decided to do penance in order to beget a son.’

Sage Matanga advised her to go to Akashaganga Teertham where her wishes would get fulfilled.

At a distance of ten yojanas towards south is situated Dhanachala mountain, which is believed to be the abode of Lord Narasimha.

Brahma Teertham lies in its vicinity.

At a distance of ten yojanas south of Brahma Teertham, flows river ‘Suvarnamukhari‘.

Venkantachalam mountain is situated to the north of this river and the holiest place called Swamipushkarini is situated among its numerous peaks. 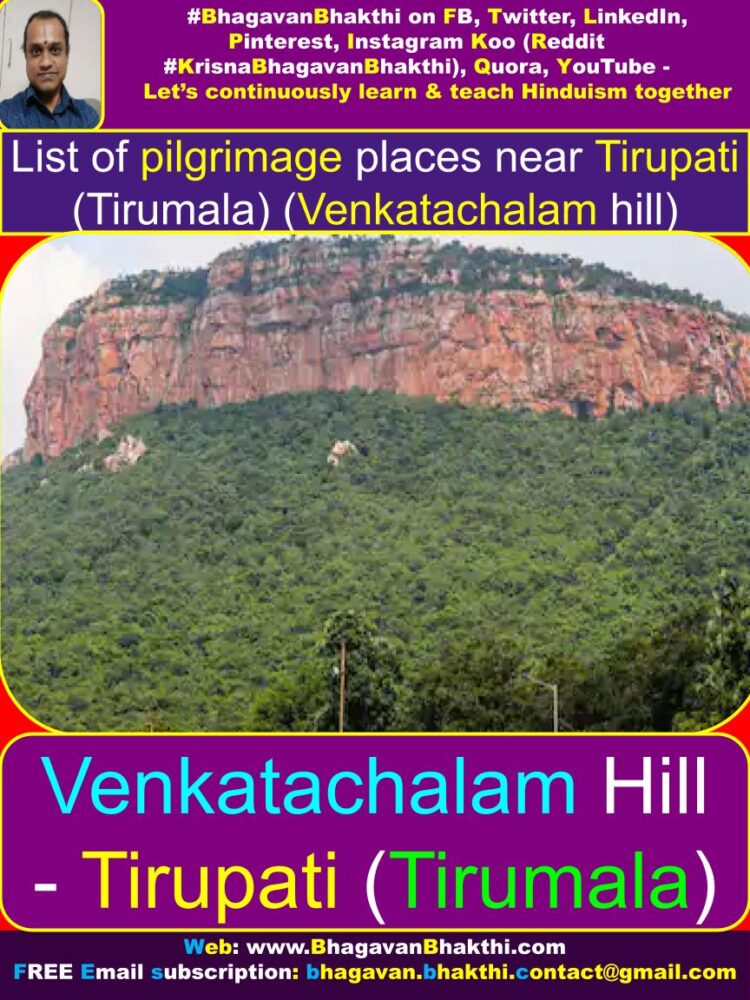 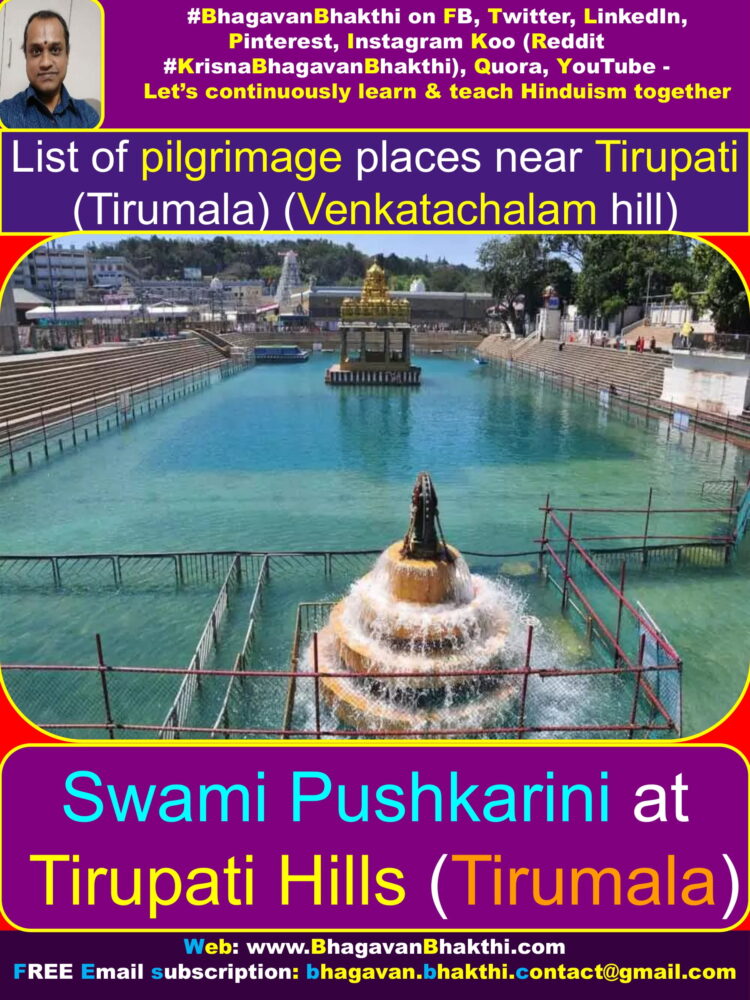 You should visit that place and take a holy dip in its water.

After that you should seek the blessings of Lord Varaha Swamy and Lord Venkateswara. 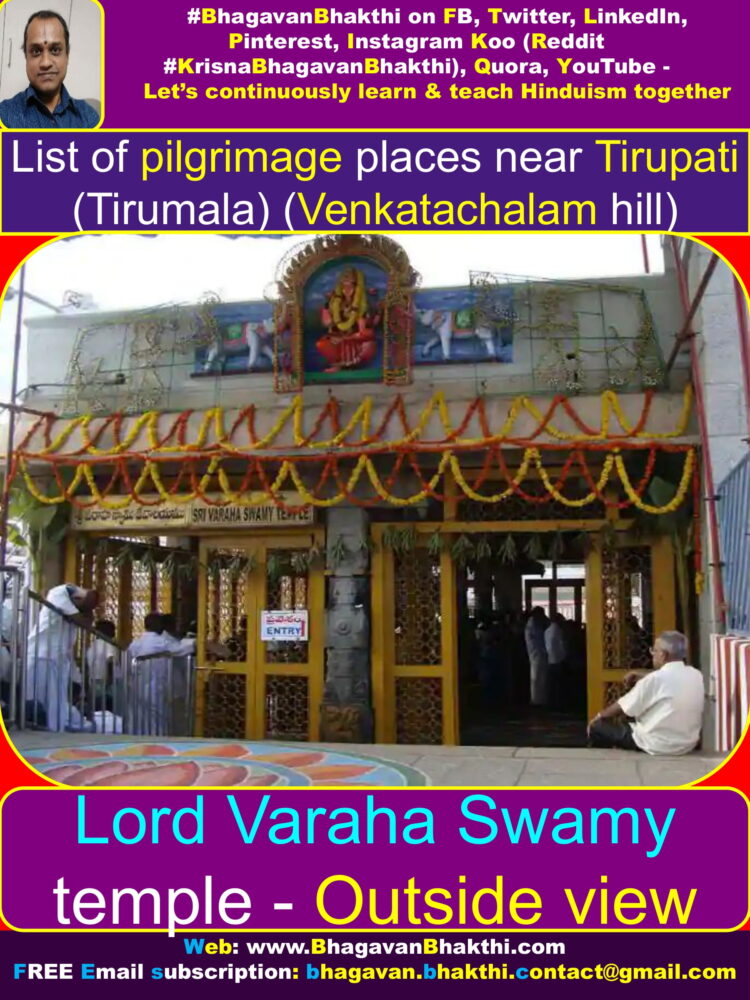 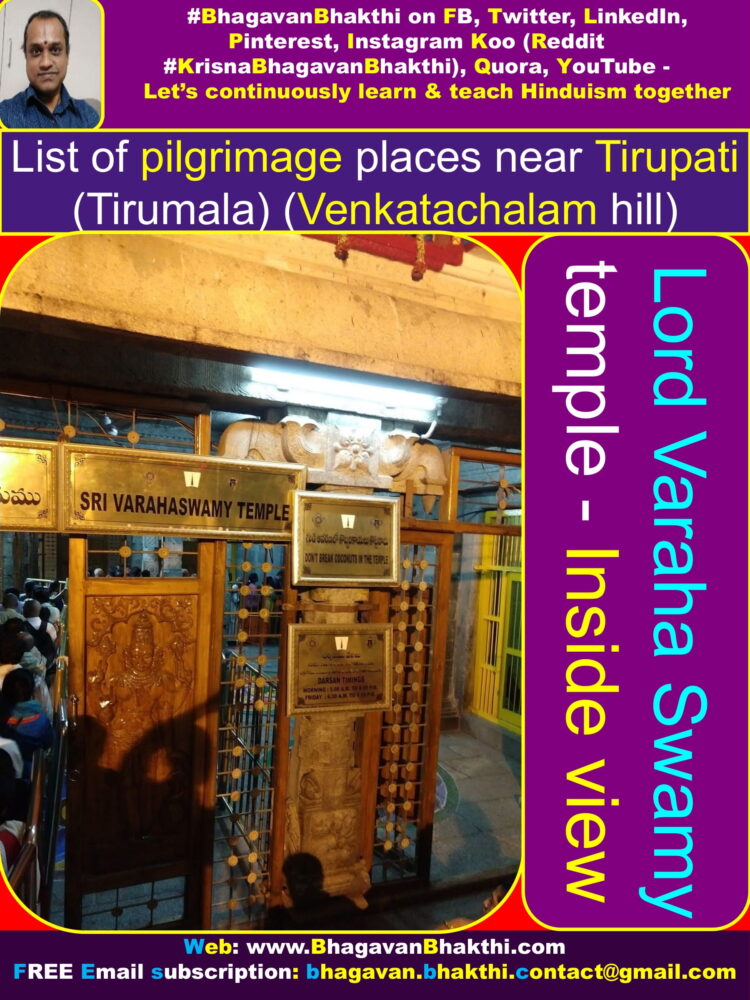 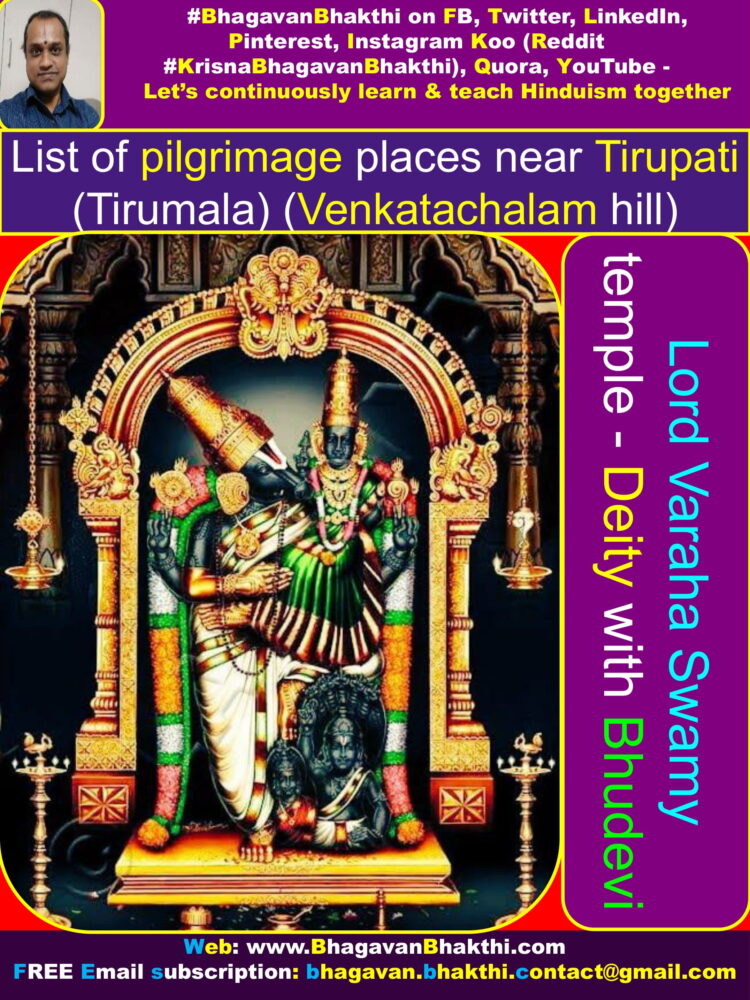 You should then go towards north of Swami teertham and you would reach Akashaganga teertham.’ 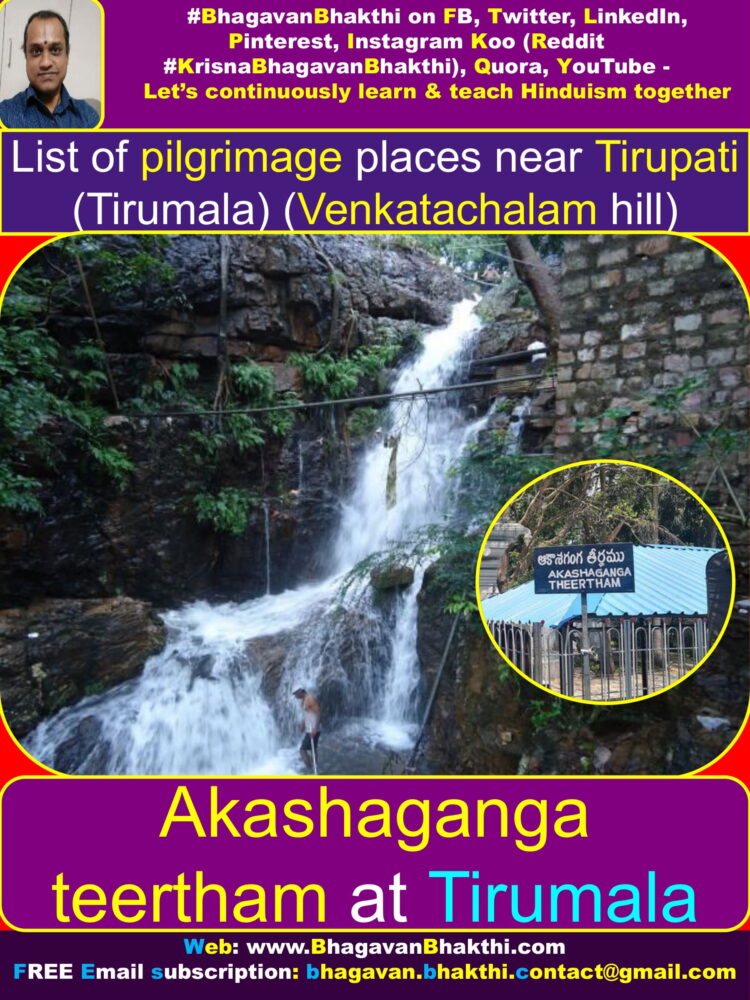 Acting as per Matanga’s instructions, Anjana went to Akashaganga teertham and did her penance.

Finally Lord Vayudeva appeared before her and promised to incarnate as Hanuman. 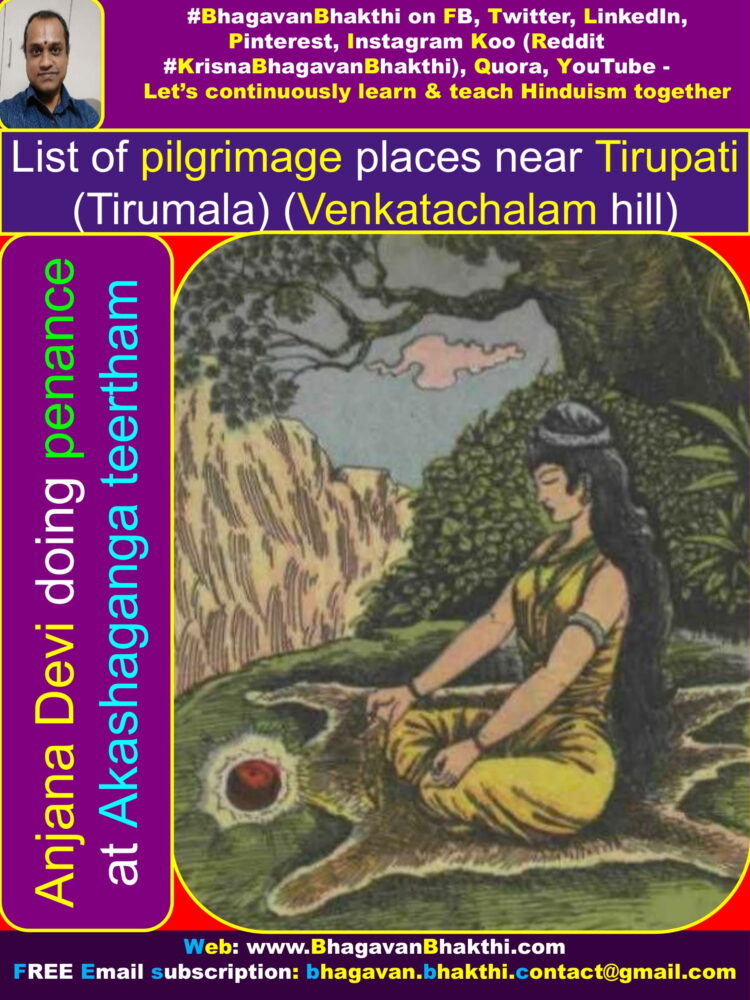 More information will be added to this on regular basis. Please visit this post again and other posts of this website (blog) to get the updated information

To know full information about “Pilgrimage places in India“, you can visit this link:

To know full story of “How Lord Srinivasa (Balaji) (Venkateswara) got married with Padmavati Devi“, you can visit this link: