Bhagavan Lord Sri Jagannath, Lord Balabhadra and Sri Subhadra Devi blessings to you and your family!

Just before moving towards to know about “What are Puri Jagannath temple history (origin) unknown facts (Purushottam Kshetram)“, let us know few basic and important information. 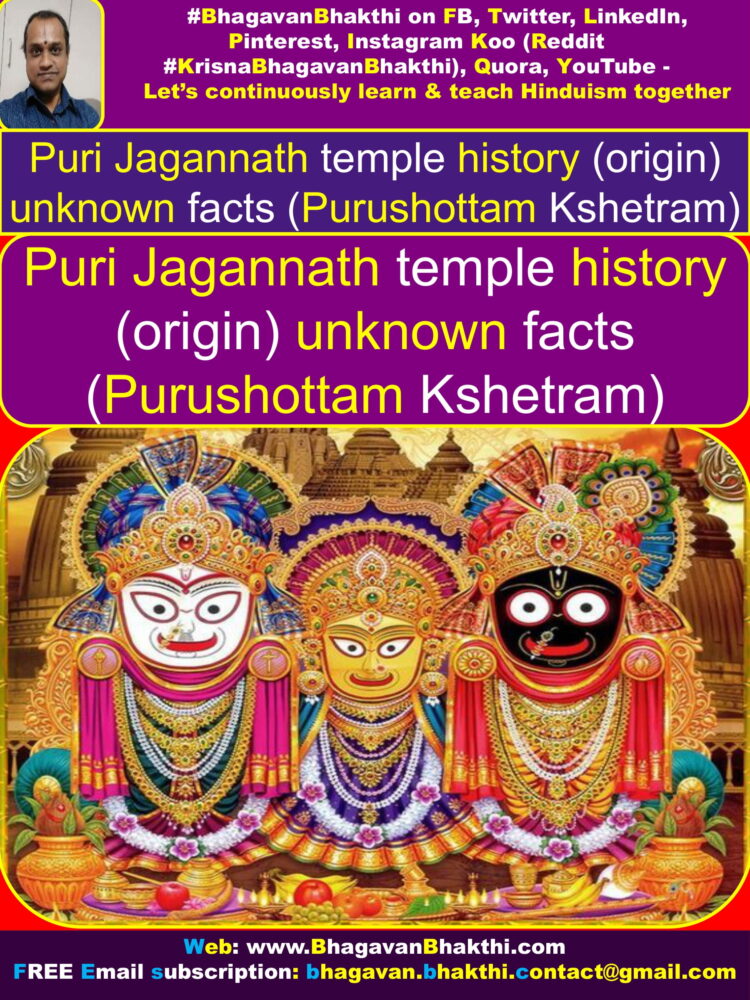 The auspicious and divine Sri Jagannath Temple is an important temple dedicated to Lord Jagannath (Lord Krishna), a form of Lord Vishnu.

The place Sri Puri Jagannath is located in the state of Indian state Odisha on the eastern coast.

The present temple was rebuilt from the 10th century onwards, on the site of earlier existing temples in the compound, but not the main Jagannatha temple.

This construction was started by Anantavarman Chodaganga, the first king of the Eastern Ganga dynasty. 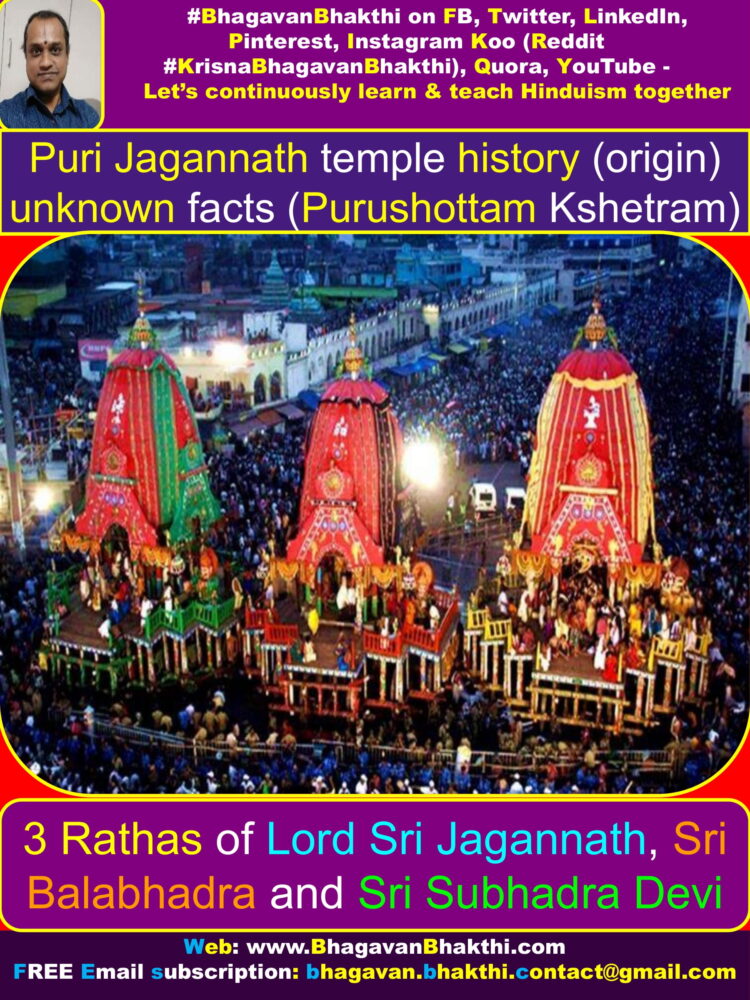 Unlike the stone and metal icons found in most Hindu temples, the image of Sri Puri Jagannath is made of wood and is ceremoniously replaced every 12 or 19 years by an exact replica.

The other three been Rameswaram at south, Dwarka at west and Badrinath at the north of India. 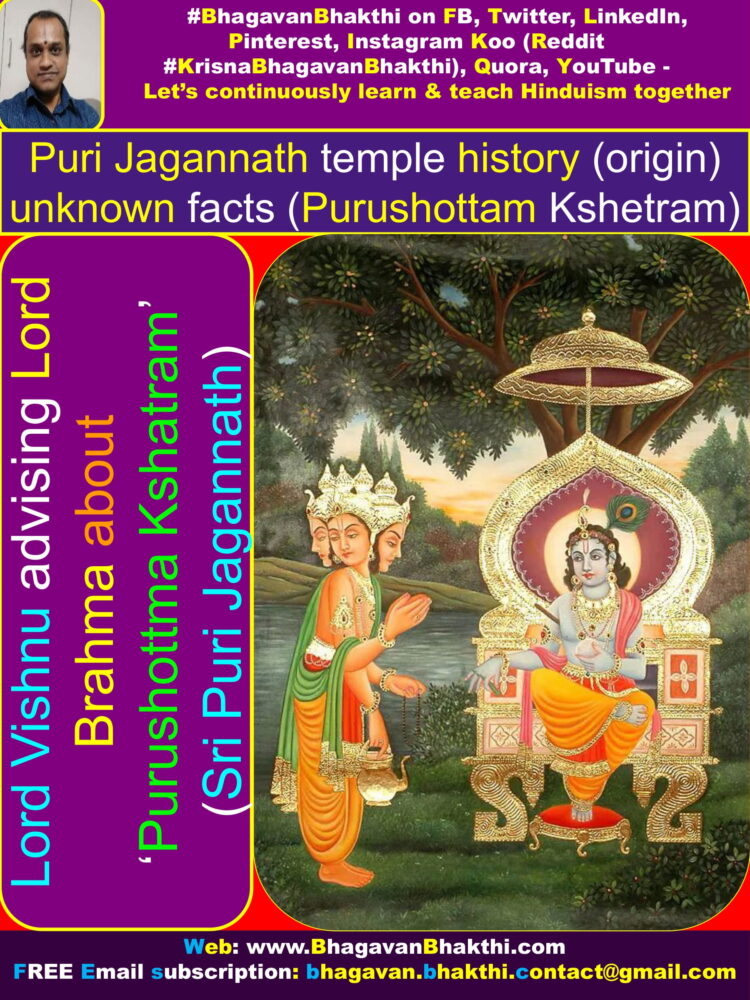 Once Sages asked to Jaimini: O revered sage! We would like to know more about Purushotthama Kshetra,

Sage Jaimini replied: The sacrosanct place of Purushottama Kshetram is graced by the presence of Lord Sri Jagannatha (Krishna / Vishnu).

During ancient times, Lord Sri Varaha had rescued Prithvi Devi from the clutches of Hiranyaksha, the mighty demon who had abducted her to Rasatala.

After Prithvi Devi had been established in its original position, Lord Sri Brahma Deva commenced his creations.

Lord Sri Brahma Deva wondered about the means by which human beings could get liberated from three major types of miseries (sorrows), that is – 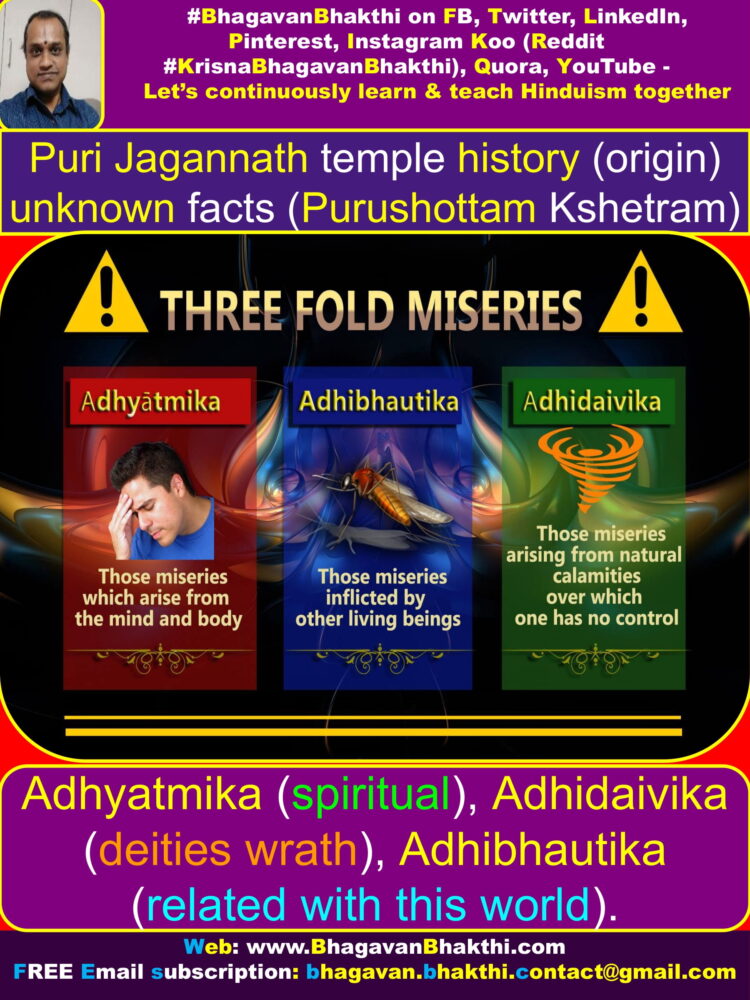 He sought the help of Lord Sri Vishnu who eulogized the greatness of Purushottama Kshetra and advised him to go their.

Lord Sri Vishnu said: ‘Purushottama Kshetra is situated at the sea-shore, to the south of river Mahanadi.

This sacrosanct place of mine does not get affected by deluge.’

‘I dwell at this holiest place as ‘Bhagavan Purushottama.’

‘There is a holy pond called Rohini in the vicinity. Anybody who takes a holy dip in that pond gets absolved of all his sins.’

‘O Brahma! You must pay a visit to Purushottama Kshetram, where spending a day bestows virtues greater than all the austerities combined together.’ 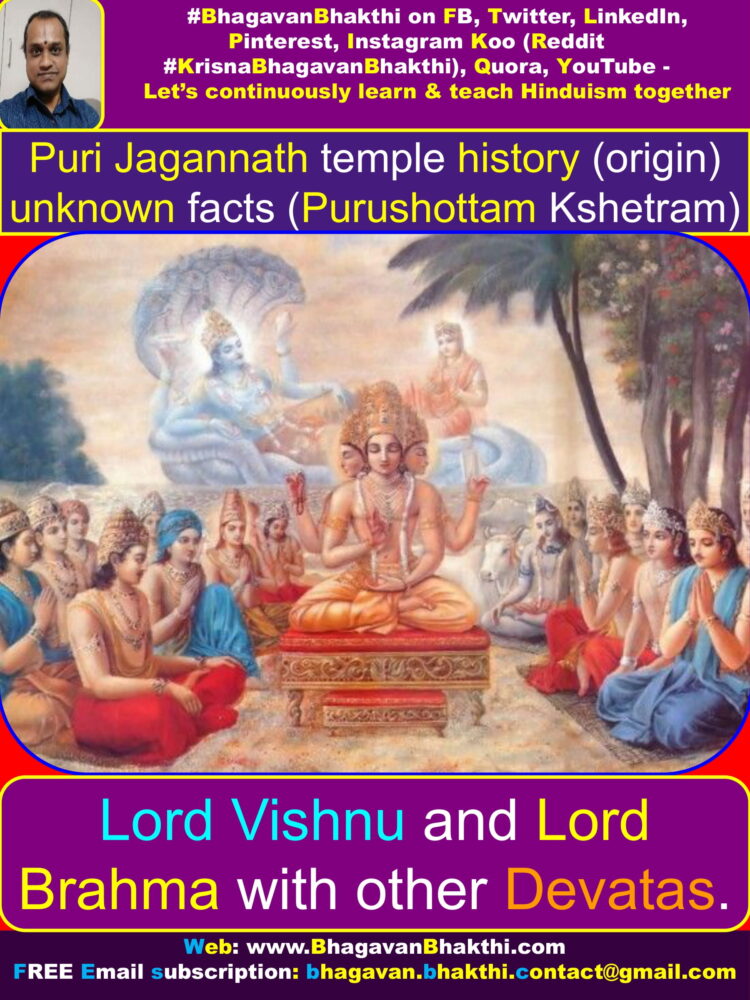 This way, Lord Sri Brahma Deva went to Purushottama Kshetram as per the instructions of Lord Sri Vishnu.

He was so engrossed in his meditation that he remained in that state for a very long time.

This resulted into total chaos as Yamaraja found that his power of causing death had no effect on people living in Purushottama Kshetram.

A worried Yamaraja rushed towards Neelachala mountain and sought Lord Sri Vishnu’s intervention in the matter. 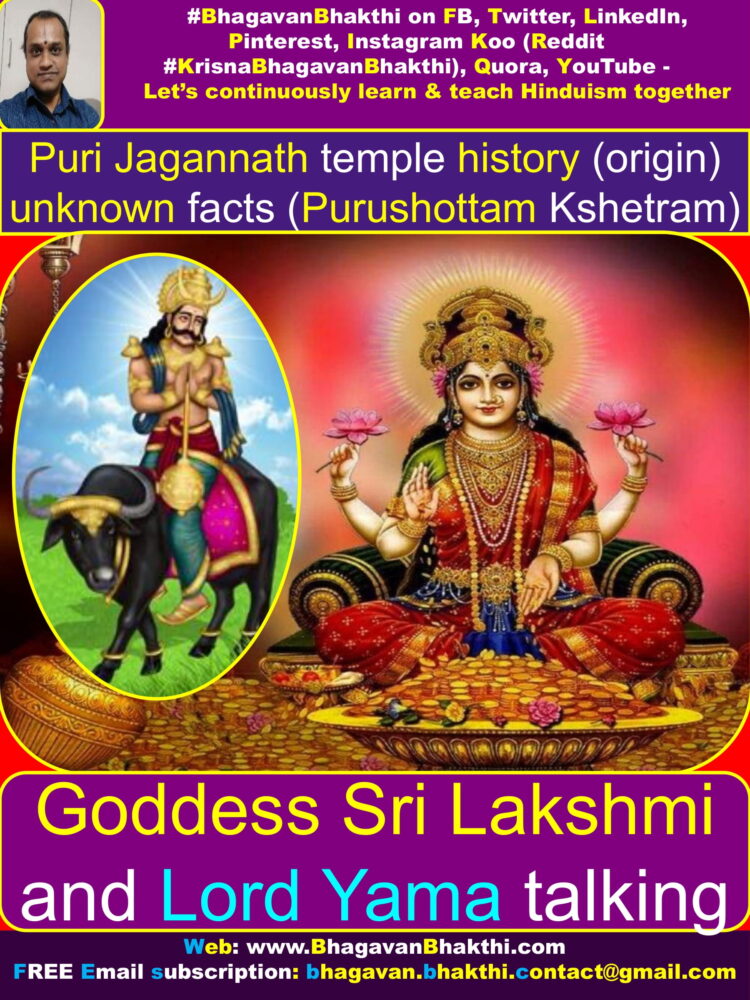 ‘Anybody residing at this holy place is freed from the vicious cycles of birth and death after becoming absolved of all his sins.’

‘This is the reason why you are experiencing this unusual problem.’

‘The whole world except this holy place will come into your jurisdiction.’

Yamaraja was amazed by this revelation so he asked Sri Laxmi Devi:

‘I would like to know why such a privilege is being given to this place?’

‘At the time of deluge when the whole world was submerged in the water, Rishi / sage Markandeya was struggling to find a secure place for his survival.’

‘Although he was blessed with an unusually long life of seven Kalpas, but still he needed a place to live in.’

‘He started swimming and finally managed to reach Purushottama Kshetram, which had remained unscathed by the turbulence of the deluge.’ 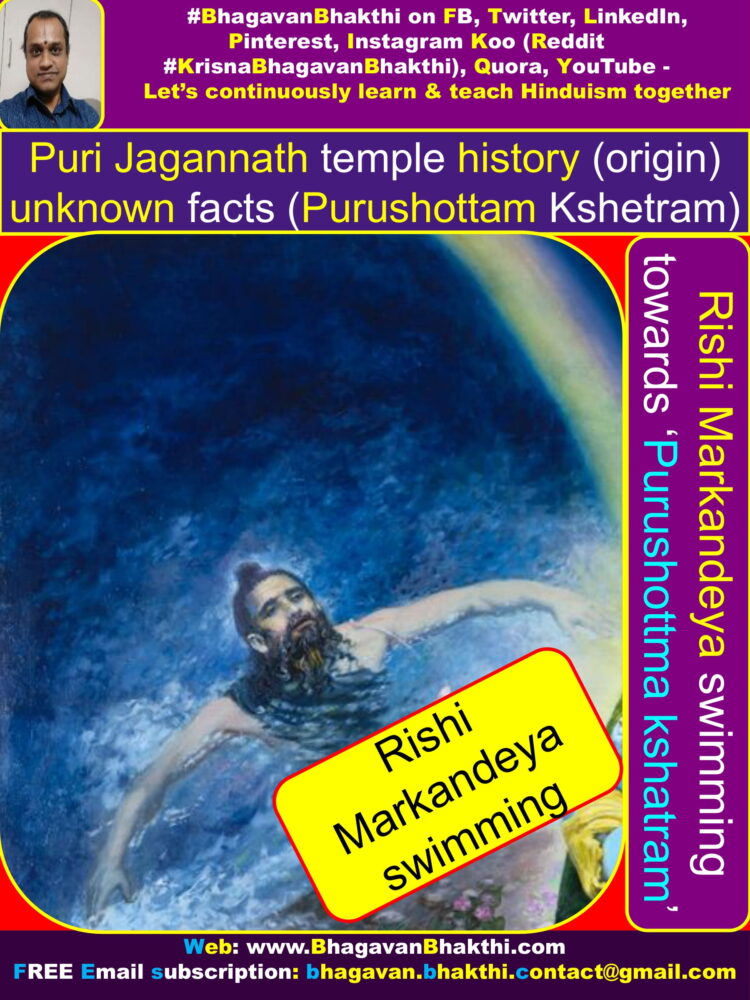 ‘There he saw a divine tree called ‘Akshaya Vata‘.

‘Markandeya continued to swim along the coast wondering how that place had managed to remain unaffected by deluge when the whole world had been submerged.’

‘Suddenly he heard a voice, which appeared to be coming from the direction of the Akshaya Vata:

“O Markandeya! Don’t worry! Take my refuge and you shall be protected”.’

‘Markandeya was very surprised and looked all around.’

‘He kept on swimming and saw Lord Sri Vishnu, who was engrossed in his yoga nidra in Ksheera sagaram.’ 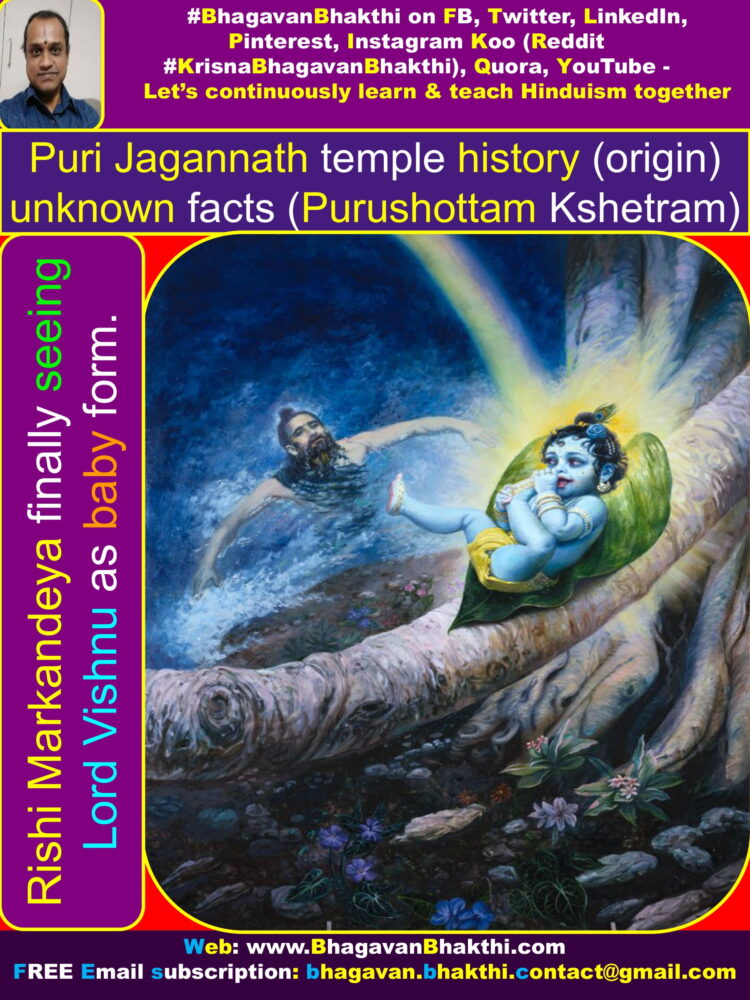 ‘I (Laxmi) was also present there. Markandeya eulogized Lord Sri Vishnu in the following way:’

‘Salutations to the supreme Bhagavan- the source of all creations! O Jagannatha! Protect me from getting drowned.’

‘On realizing the gravity of the situation he said: ‘Raise your head and look at the top of this Kalpa Vata.’

‘You will find an infant sleeping on a leaf of the Kalpa Vata.’ ‘The infant is none other than Kaala himself.’

‘You should enter inside his (Kaala’s) body through his opened mouth and live peacefully as there is no other place for you to live in.’

‘Markandeya entered into Kaala’s body as per the instructions given by Lord Sri Vishnu and was amazed by the expanse of his belly, which appeared like a bottomless pit.’

‘Markandeya also saw all the fourteen Bhuvans existing within Kaala’s belly including all the creatures-Deities, Sages, Siddhas, Gandharvas, etc.’

‘Markandeya wandered all over the place and after getting tired came out through Kaala’s opened mouth.’

‘He found Lord Sri Vishnu was still present there accompanied by his consort- Sri Laxmi Devi.’ 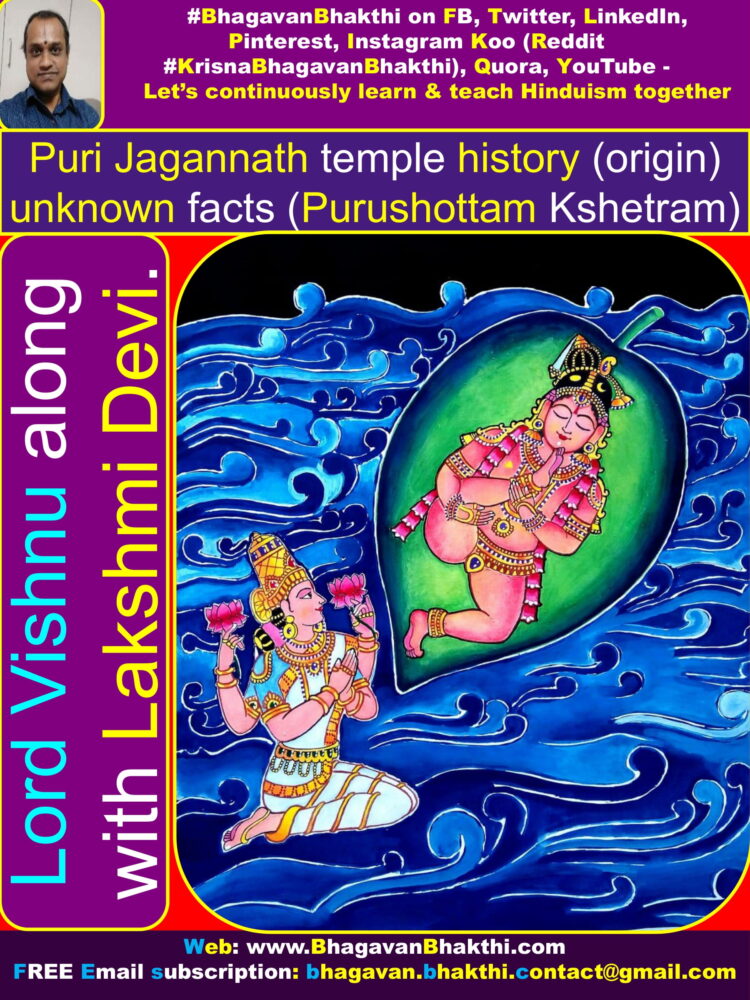 ‘Markandeya made salutations to both of them and narrated his experiences he had inside Kaala’s belly.’

‘Lord Sri Vishnu blessed him and made a revelation:’

‘ The place you had visited few moments ago is beyond the limits of creation or deluge.’

‘The name of this holiest place is Purushottama Kshetra and it is my permanent abode for I do not leave it even for a moment.’

‘Markandeya was very impressed and requested Lord Sri Vishnu to allow him to live there.’

Lord Sri Vishnu replied: ‘O Brahmarishi! I shall remain at Purushottama Kshetram till the end of this Kalpa.’

‘I shall also create a sacrosanct place, which would enable you to become immortal (Highly long life – Chiranjivi).’ 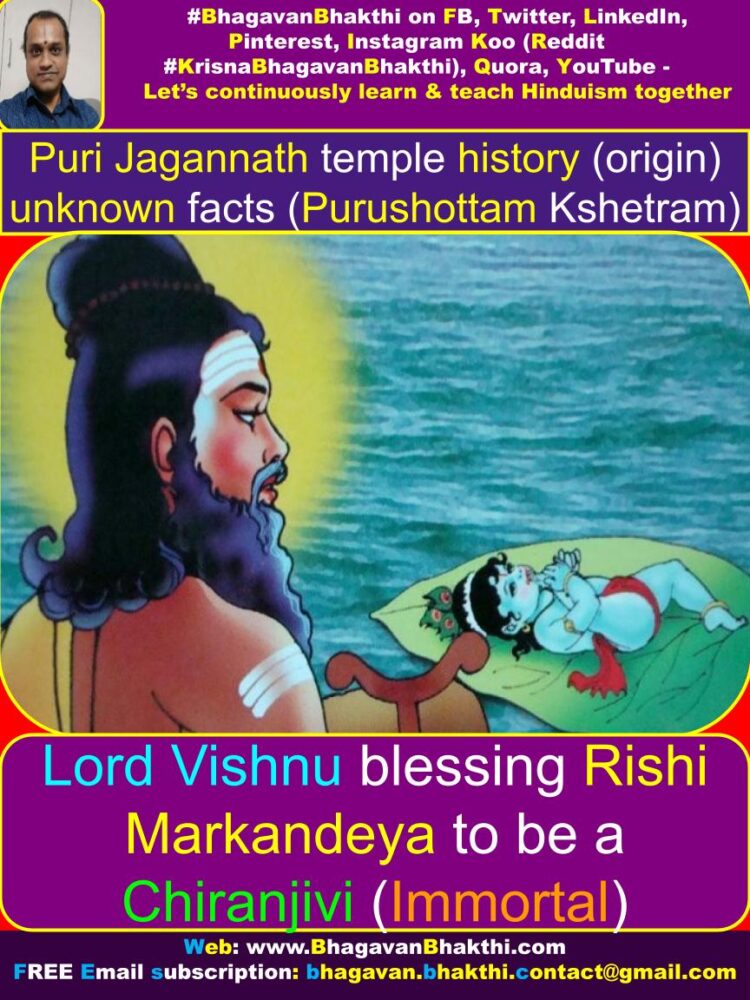 Rishi / Sage Markandeya then dug up a reservoir with the help of Vishnu’s chakra.

He did an austere penance to please Lord Maheshwara as the result of which he was indeed blessed with immortality.

In course of time, this reservoir became famous as ‘Markandeya Kunda‘.

THE HOLY PLACES IN THE VICINITY OF PURUSHOTTAMA KSHETRAM ARE AS GIVEN BELOW:

‘Purushottama Kshetram resembles a Shankha (conch) in shape and is graced by the presence of Lord Shiva.’ 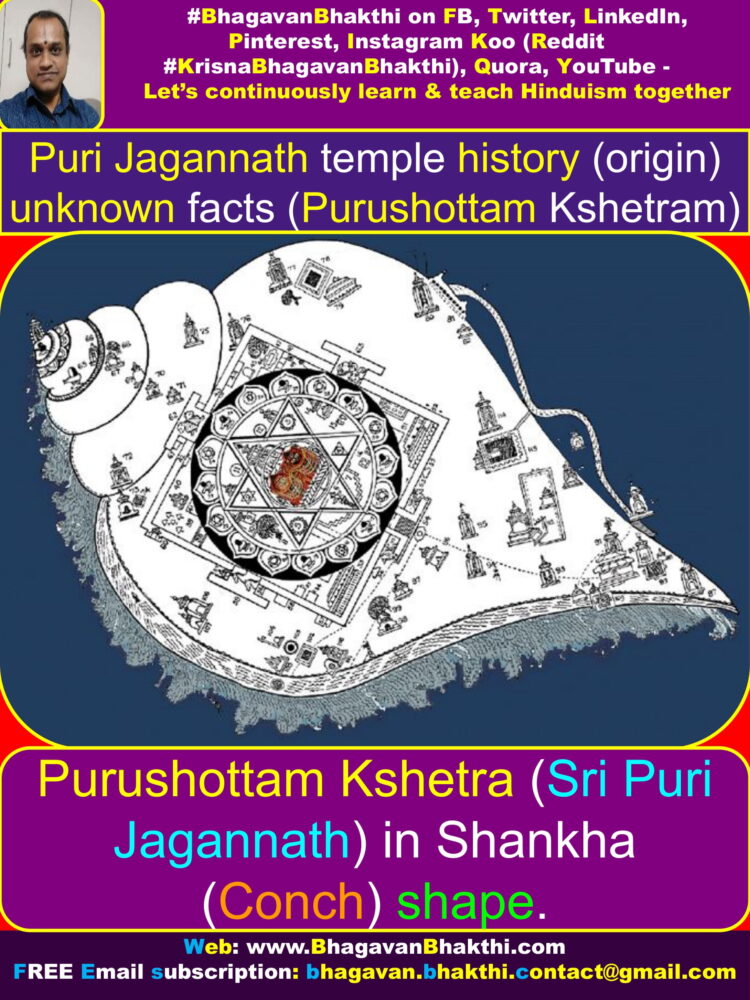 ‘Towards its north is situated a temple of Lord Neelakantha.’

‘A famous Shiva Linga named Kapaalamochana is also situated in the  vicinity.’

‘One who makes a pilgrimage to Kapalamochana becomes liberated from gravest of sins.’

‘A temple of goddess Vimala Devi is also situated nearby.’

‘Purushottama Kshetram is considered to be supreme among all the places of pilgrimage and for this very reason, it is aptly named ‘Teertha Raja‘.

[(Teertha Raja – Here Teertha Raja means, this place is the King of all the teerthas (pilgrimage places).]

‘A divine pond called Rohini Kunda (A Pond) is also situated nearby.’ 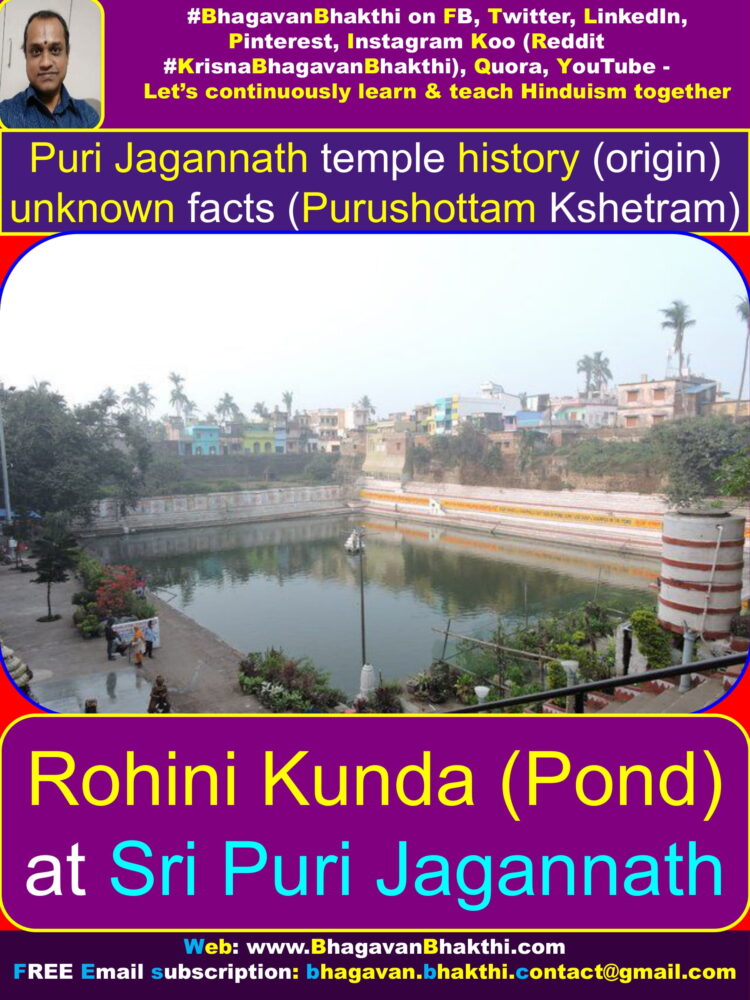 ‘Anybody who takes a holy dip there is freed from the vicious cycles of birth and death.’

‘It is believed that the increased level of water at the time of deluge ultimately recedes and disappears into this pond.’

‘It is well protected by eight goddesses from all the eight directions.’

The names of these eight goddesses are: 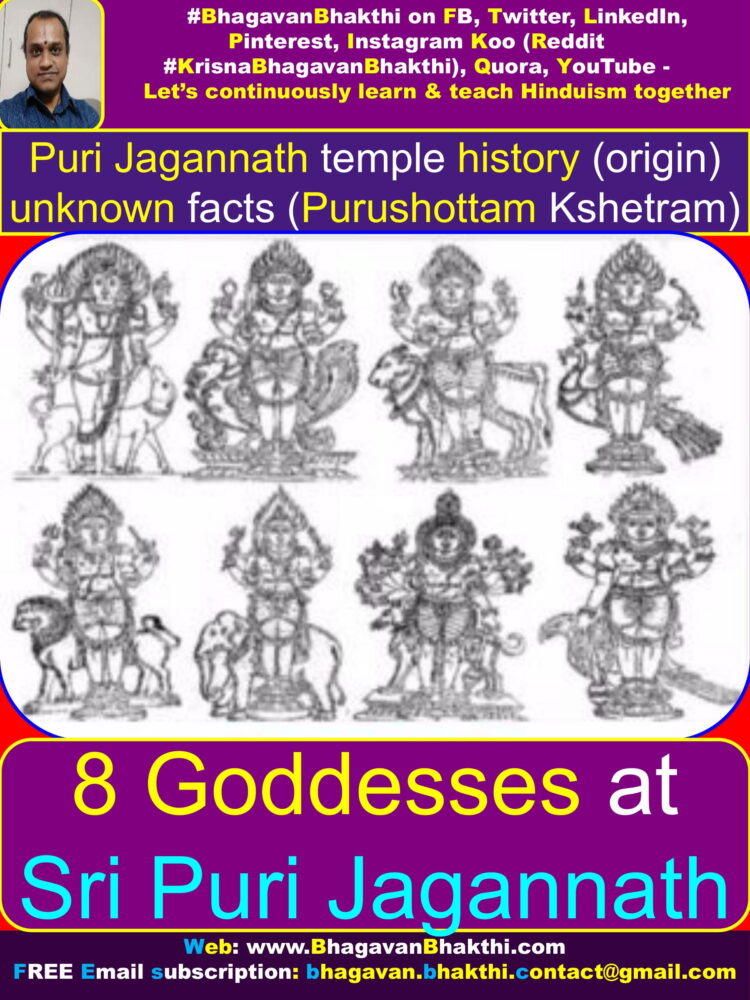 How can Lord Rudra be absent when Rudrani has manifested herself in eight forms, so,

He (Lord Shiva) has manifested himself in eight different forms as well, that is:

Lord Shiva’s 8 forms at Puri is as given below:

‘In the coming Satya yuga there would be a king named Indradyumna and would be famous for his unflinching devotion in Lord Sri Vishnu.’ 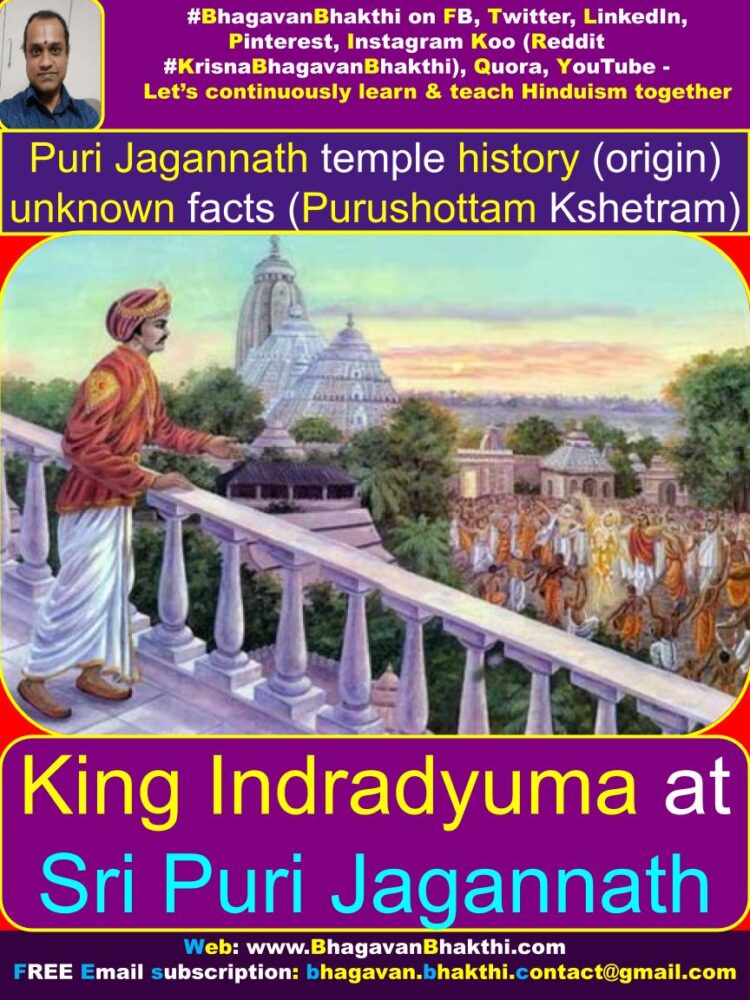 ‘Being pleased by the king’s devotion, Lord Sri Vishnu will ultimately manifest himself from a wooden structure to bless him.’

‘Vishwakarma would then carve out four idols (Jagannath, Balabhadra, Subhadra and Sudarshana chakra)’

‘from the wooden block all of which would be installed by none other than you (Lord Sri Brahma Deva).’ 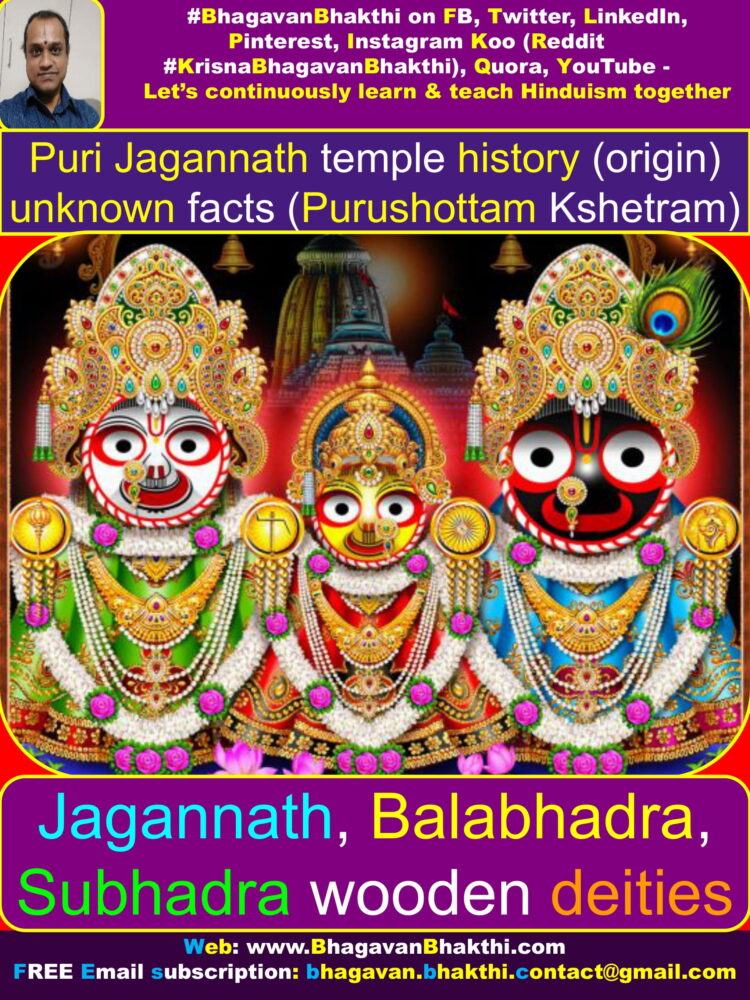 Once, while sage Jaimini was describing the greatness of Purushottama Kshetram to the assembled sages, all of them curiously asked him:

‘Where is Purushottama Kshetram situated?

Rishi Jaimini replied: ‘Utkala is situated at the eastern coast of Bharatavarsha.’

‘At the time of deluge, when everything gets submerged in water, Utkalaa remains unaffected and it is the very place from where the knowledge of the Vedas spread in all directions.’

‘The residents of Utkalaa are not only learned, but also very prosperous.’

‘There is not a single person in this land who is not a devotee of Lord Sri Vishnu.’

‘All the people belonging to the four prominent varnas (Brahmin, Kshatriya, Vaishya and Shudra) diligently follow their respective dharma.’ 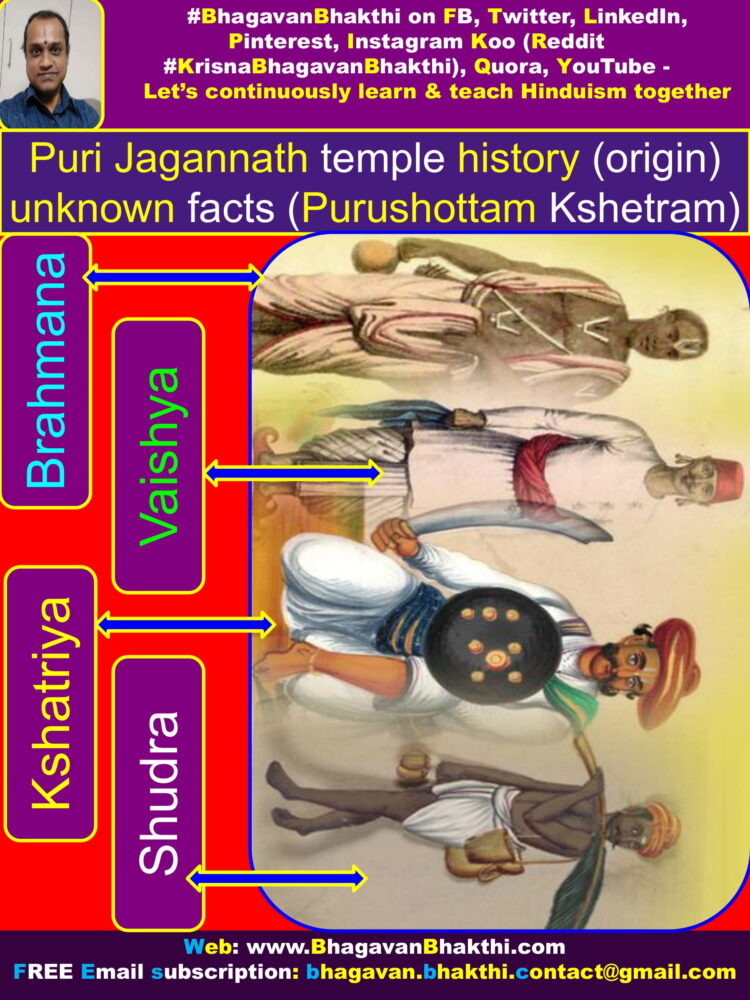 ‘This holy place never experiences natural calamities of any kind.’

PS: This is the place presently known as Puri Jagannath, which is situated in Odisha in India. 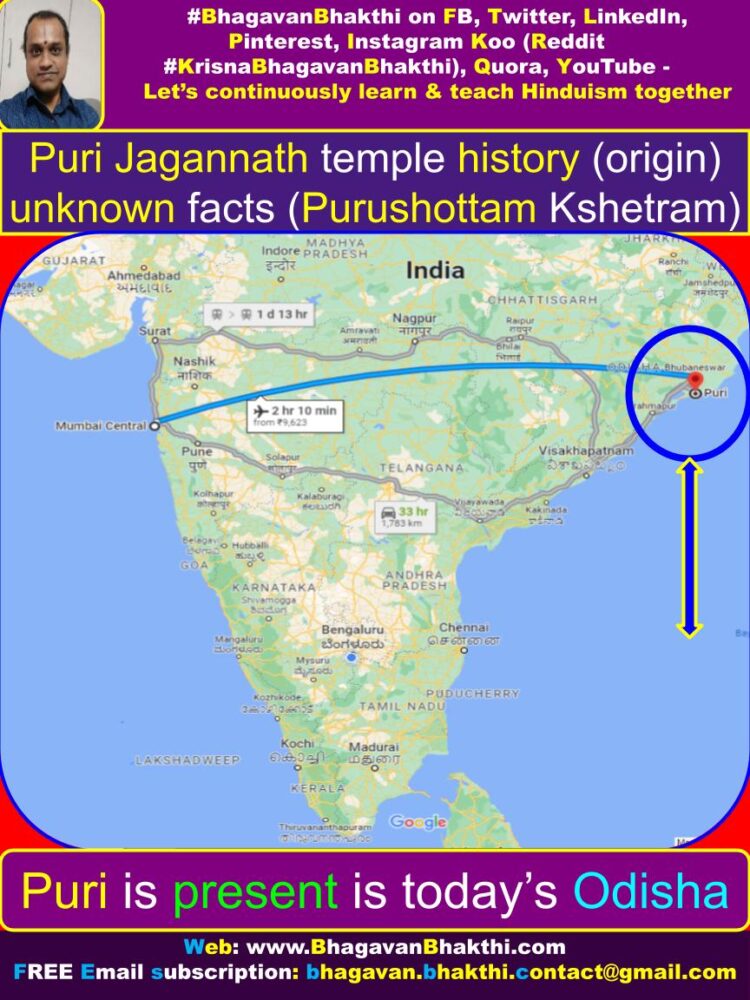 More information will be added to this on regular basis. Please visit this post again and other posts of this website (blog) to get the updated information

To know full information about “Pilgrimage places in India“, you can visit this link:

To know information about “Sri Puri Jagannath unknown facts“, you can visit this link: