Bhagavan Lord Sri Vishnu, Lord Shiva and Sri Parvati Devi blessings to you and your family!

Just before moving towards to know about “Ruru, a demon story“, let us know few basic information. 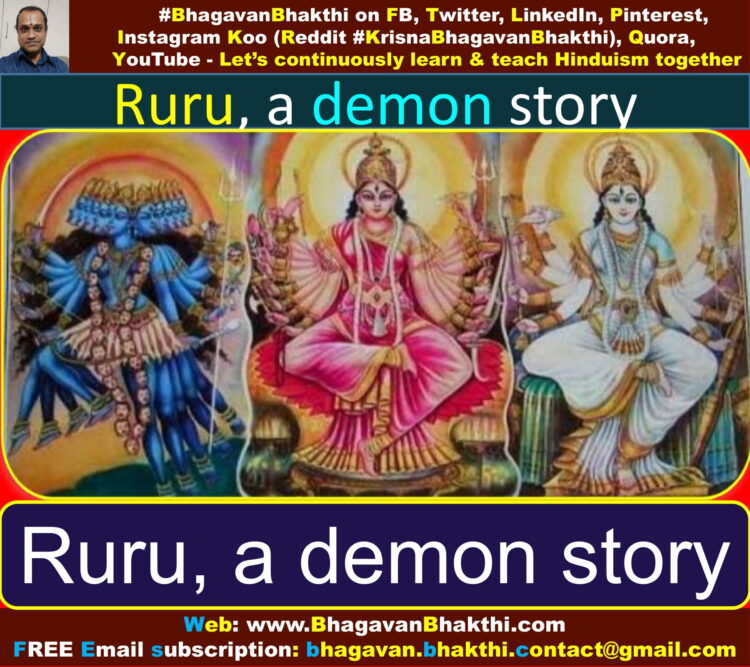 There was a demon who wanted to marry Sri Parvati Devi.

His name was Ruru. Ruru happened to see Sri Parvati Devi and decided that this was the woman who would be his wife.

Ruru began to perform tapasya / penance, so that his desire might be satisfied.

Sri Brahma Deva appeared before him and asked, “Ruru, why are you performing such difficult tapasya?”

This meditation was going on in a mountain named Malaya. And such was the power of Ruru’s meditation that the mountain started to burn.

The fires were so strong that even Lord Shiva and Sri Parvati Devi had to run away from the mountain.

“Lord, why are we running away?” asked Sri Parvati Devi. “Why don’t you do something about the fire?”

“I can’t”, answered Lord Shiva. “This fire is on account of Ruru’s tapasya and he is performing this tapasya so as to marry you. It is up to you to do something about Ruru.”

Sri Parvati Devi decided that she would. While they were conversing, they saw a lion fighting with an elephant. 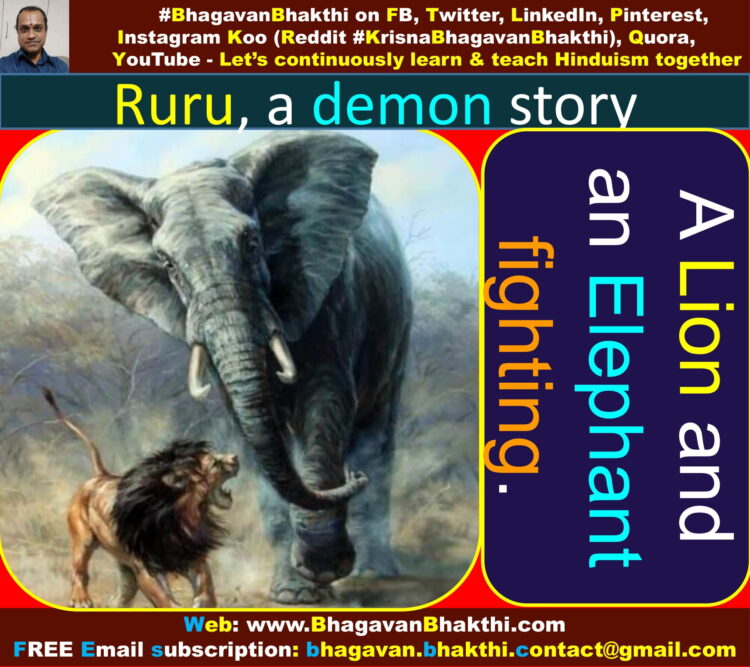 With a thunderous roar, Sri Parvati Devi went to where Ruru was.

“Ruru”, Sri Parvati Devi said. “I have come. I am Parvati. I am the one you have been praying for. Now stop meditating.

“Parvati is beautiful. Her face is like the moon, her hue is golden, and her arms are like lotus stems. Just look at yourself.” 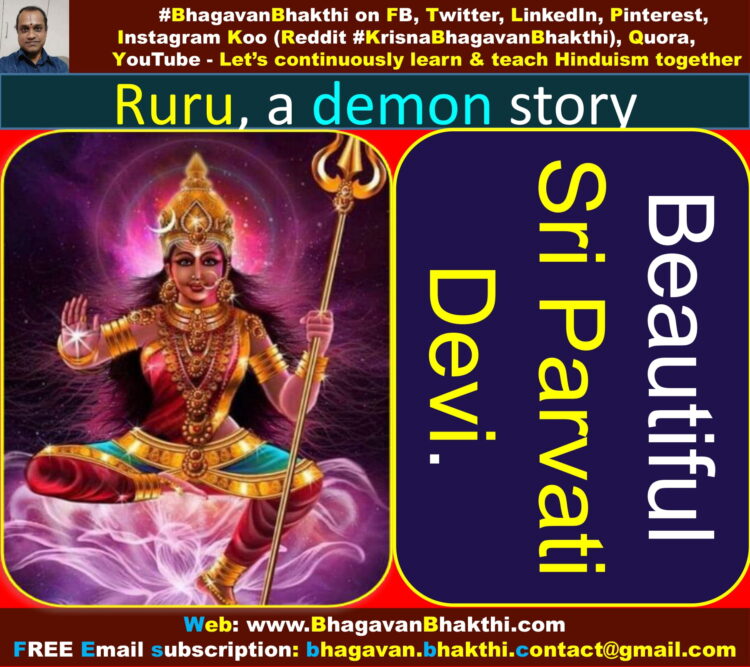 “Your looks are terrible. You can’t be Parvati. You are lying. Go away, I don’t want you.”

Two fought, with Ruru flinging boulders and trees at the goddess. Sri Parvati Devi used her nails and her teeth to get at the demon.

Ruru created several other asuras from his body. In retaliation, Sri Parvati Devi created many goddesses known as shaktis from her body.

The shaktis began to eat up the demons. Ruru fled. But Sri Parvati Devi pursued him to the ends of the earth. Ruru fled to heaven.

Finally, Ruru could flee no more. 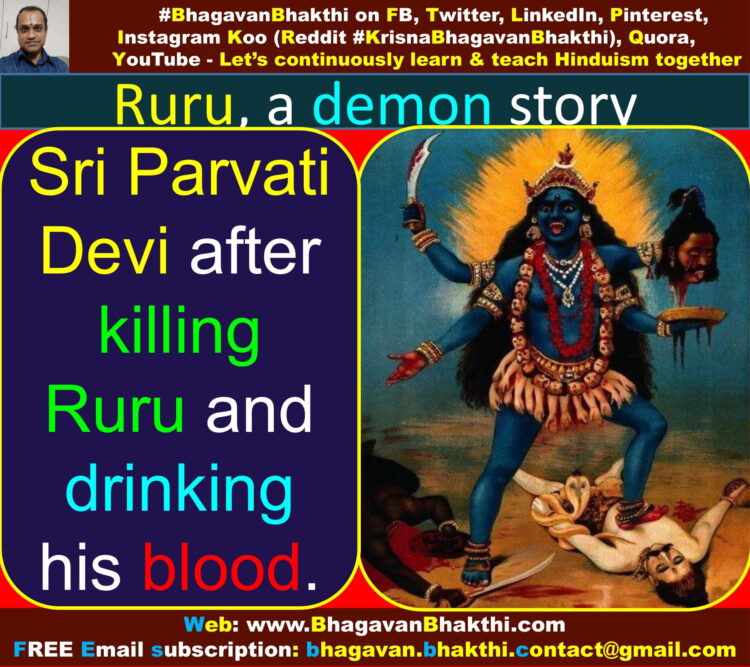 On her return to Lord Shiva, Sri Parvati Devi gave him the lion’s pelt that she had so far been wearing and Lord Shiva donned it.

For her own clothing, Sri Parvati Devi put on Ruru’s skin.

PS: That is the power of the Shakti Devi.

Here Lord Shiva wanted to show to the world that his consort Sri Parvati Devi is highly powerful.

Thus, Lord Shiva told Sri Parvati Devi to manage Ruru by on her own. 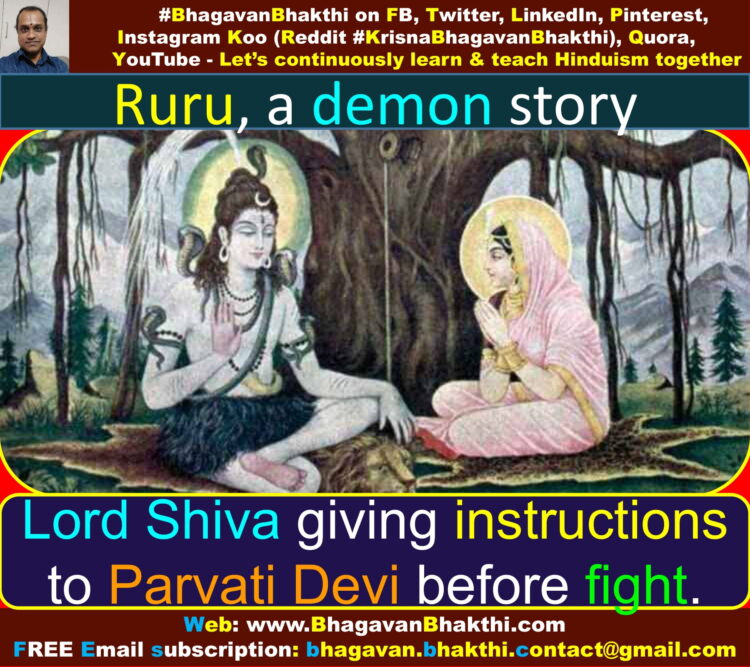 And off course, Sri Parvati Devi is highly powerful and one among the three Devis.