Namaste friends, how are you doing today? Bhagavan Sri Rama and Lord Shiva blessings to you and your family!

Bhagavan Sri Rama after slaying Ravana and his demon group, and also after freeing Sri Sita Deva came back to a southern India (Present Tamilnadu) and installed a divine Linga called Ramshwaram or Ramanatha.

This divine temple is still existing in today’s Tamilnadu, India. This divine and most auspicious temple is one of the 12 Jyotirlingams in India.

Shiva Purana mentions 64 original Jyotirlinga shrines in India and Nepal. In these, 12 are the most auspicious Lingas of Lord Shiva and thus these are also known as Maha Jyotirlingams. 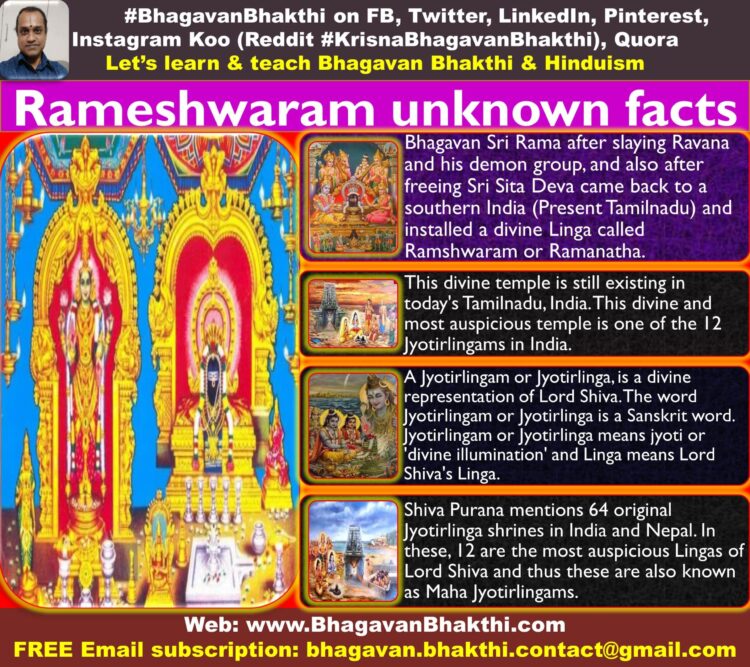 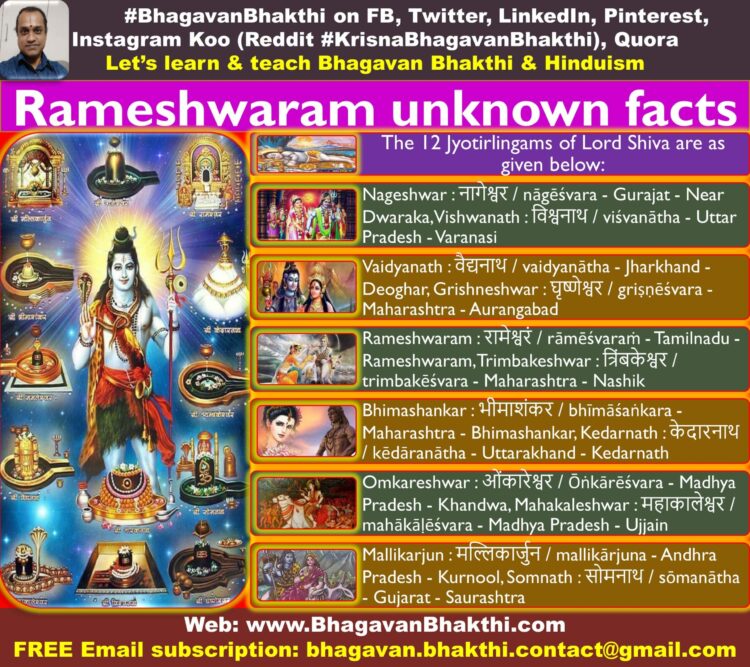 The 12 Jyotirlingams of Lord Shiva are as given below: 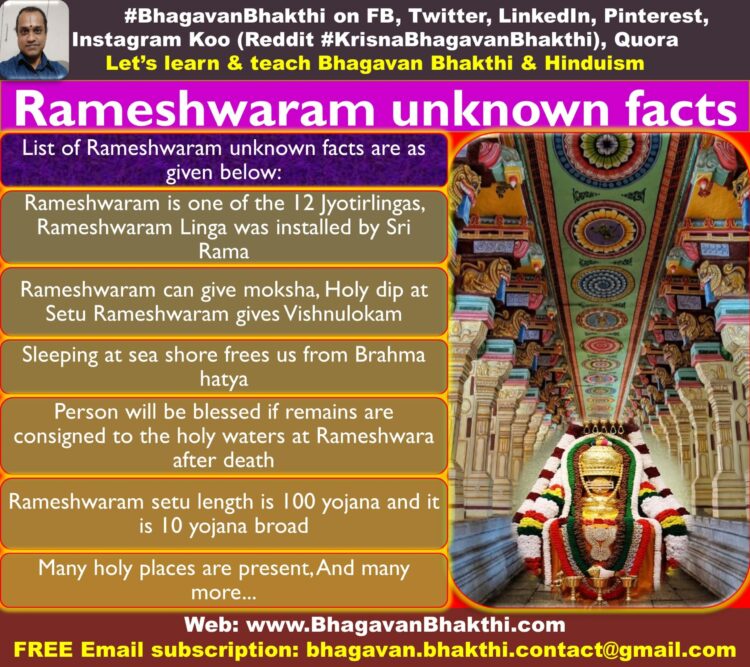 List of Rameshwaram unknown facts are as given below:

Rameshwaram is one of the 12 Jyotirlingas

Rameshwaram can give moksha

Sleeping at sea shore frees us from Brahma hatya

Many holy places are present 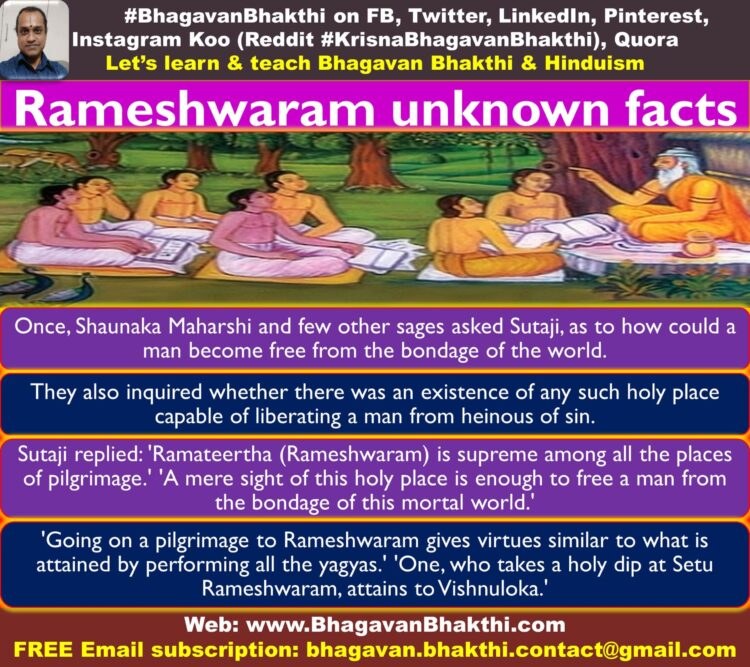 Once, Shaunaka Maharshi and few other sages asked Sutaji, as to how could a man become free from the bondage of the world.

They also inquired whether there was an existence of any such holy place capable of liberating a man from heinous of sin.

Sutaji replied: ‘Ramateertha (Rameshwaram) is supreme among all the places of pilgrimage.’

‘A mere sight of this holy place is enough to free a man from the bondage of this mortal world.’

‘Going on a pilgrimage to Rameshwaram gives virtues similar to what is attained by performing all the yagyas.’

‘One, who takes a holy dip at Setu Rameshwaram, attains to Vishnuloka.’

‘Merely by sleeping at the sea shore of Rameshwaram, a man gets absolved of heinous of sins like brahmahatya, etc.’

‘A man is blessed if his remains are consigned to the holy waters at Rameshwara after his death.’

‘Scriptures say that five types of sins are as grave as the sin of brahmahatya’: 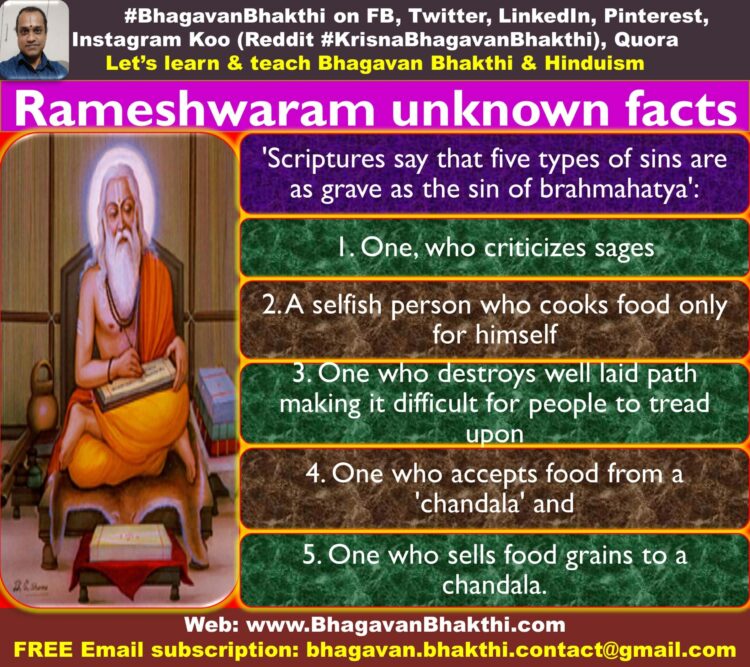 1. One, who criticizes sages

2. A selfish person who cooks food only for himself

3. One who destroys well laid path making it difficult for people to tread upon

4. One who accepts food from a ‘chandala’ and

5. One who sells food grains to a chandala.

But, all these just disappears once the sinner reaches Rameshwaram. 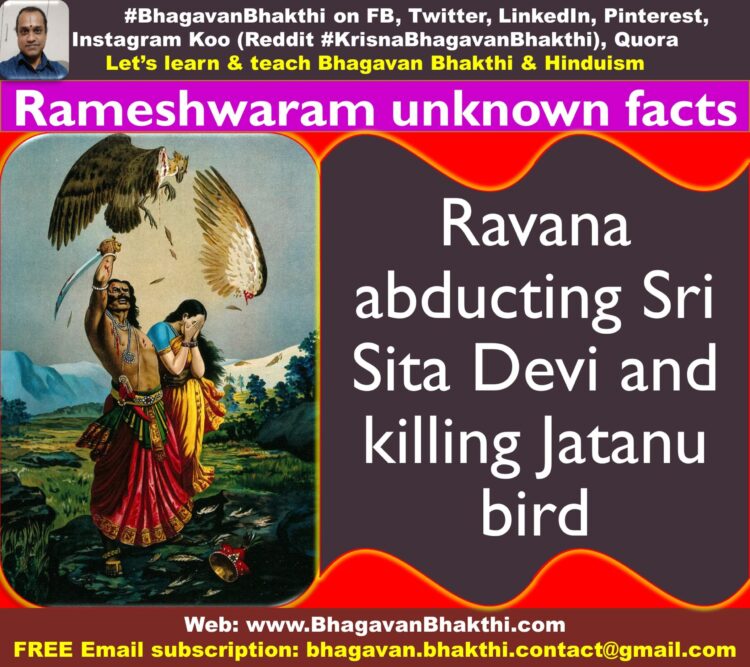 All the sages were curious to know about the holy places in the vicinity of Rameshwaram.

Sugreeva sent monkeys in all directions to find out where Sri Sita Devi had been kept by Ravana. 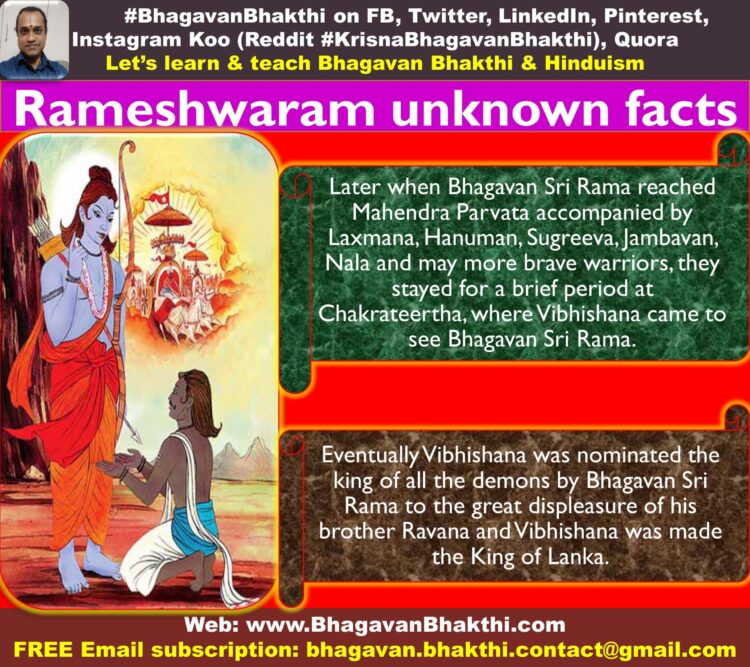 Eventually Vibhishana was nominated the king of all the demons by Bhagavan Sri Rama to the great displeasure of his brother Ravana and Vibhishana was made the King of Lanka.

Bhagavan Sri Rama and his army faced an uphill task of reaching Lanka, as they had to cross the ocean, which lay as a great barrier between them and their destination.

Samudra Deva (Ocean Demigod) revealed to Bhagavan Sri Rama that Nala had divine powers and whatever he would throw in the Ocean would not sink down, but keep on floating.

Nala tried to check the authenticity of Samudra’s statement by throwing a huge rock into the ocean, as he himself was not aware of his powers.

To the sheer amazement of everybody present there, the rock started floating on the surface of the ocean instead of sinking down.

All the rest of the monkeys tried to emulate Nala’s feat by throwing huge rocks into the ocean and to their own surprise found that the rocks did not sink.

This was how a bridge was built and across the ocean which made it possible for Bhagavan Sri Rama and his army to cross the ocean.

The length of Setu Rameshwaram Bandhana is hundred yojana and it is ten yojana broad. 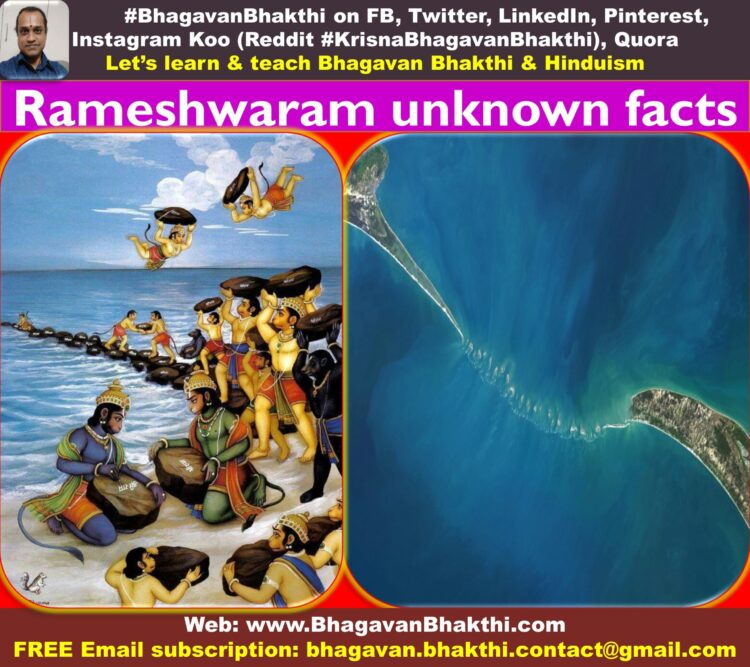 There are many holy places situated on the bridge, prominent among which are: 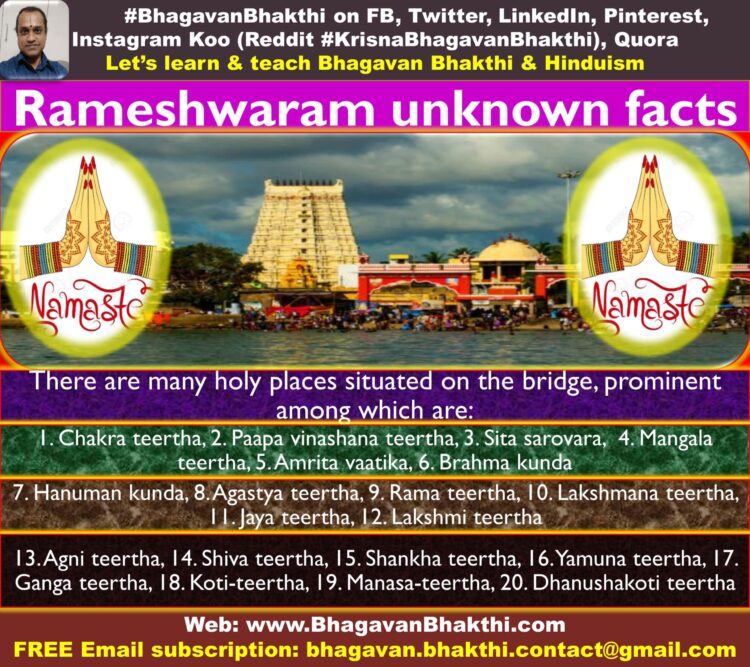 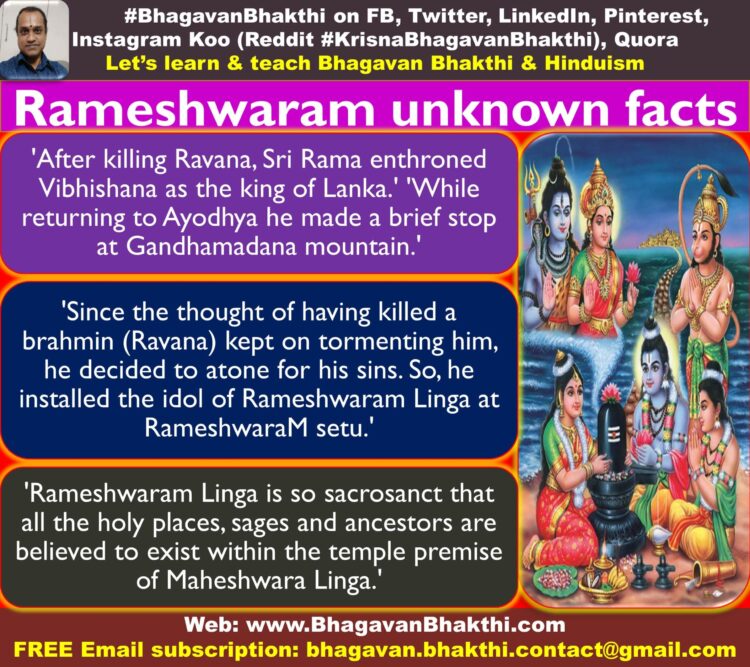 ‘After killing Ravana, Sri Rama enthroned Vibhishana as the king of Lanka.’

‘While returning to Ayodhya he made a brief stop at Gandhamadana mountain.’

‘Since the thought of having killed a brahmin (Ravana) kept on tormenting him, he decided to atone for his sins. So, he installed the idol of Rameshwaram Linga at RameshwaraM setu.’

‘Rameshwaram Linga is so sacrosanct that all the holy places, sages and ancestors are believed to exist within the temple premise of Maheshwara Linga.’

‘Being installed by Bhagavan Sri Rama himself, this particular Linga has special significance attached to it.’

‘One who goes on a pilgrimage to this holy place, is certain to attain salvation even if he were a ‘Mlechha’ (born in a family who eat cow’s meat and one who doesn’t follow Dharma at all). 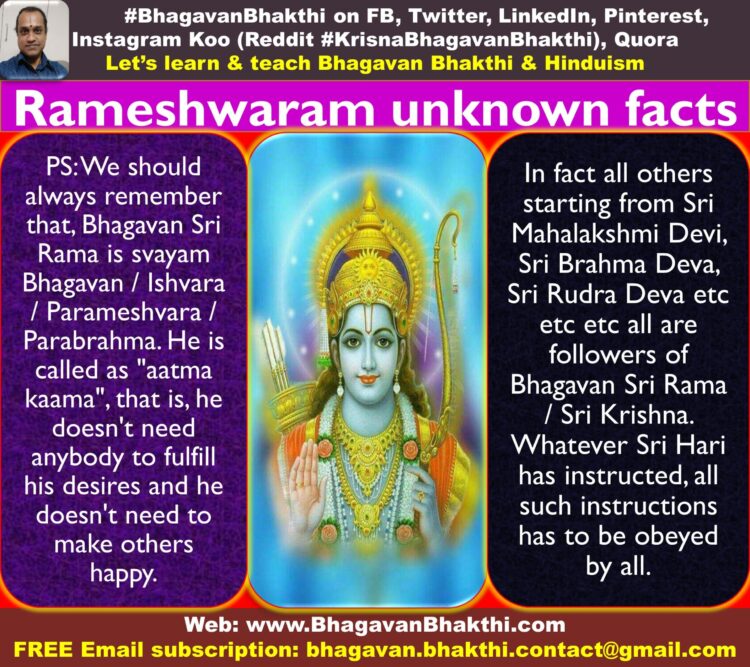 Whatever Sri Hari has instructed, all such instructions has to be obeyed by all.

Also we should note that, Bhagavan Sri Rama, he only shows the way for the common person to follow, that means he shows us the path if one does one or more sins, that person has to do so and so Karmas to get rid of those sins.

Bhagavan Sri Rama / Sri Krishna doesn’t need to pray anybody and he never follows anyone, as he is svayam Bhagavan.