Just before moving forward, I would like to ask you a question:

This is purely because, people can’t pronounce these Sanskrit words easily. So they pronounce as per their own capability.

Let us understand that now: 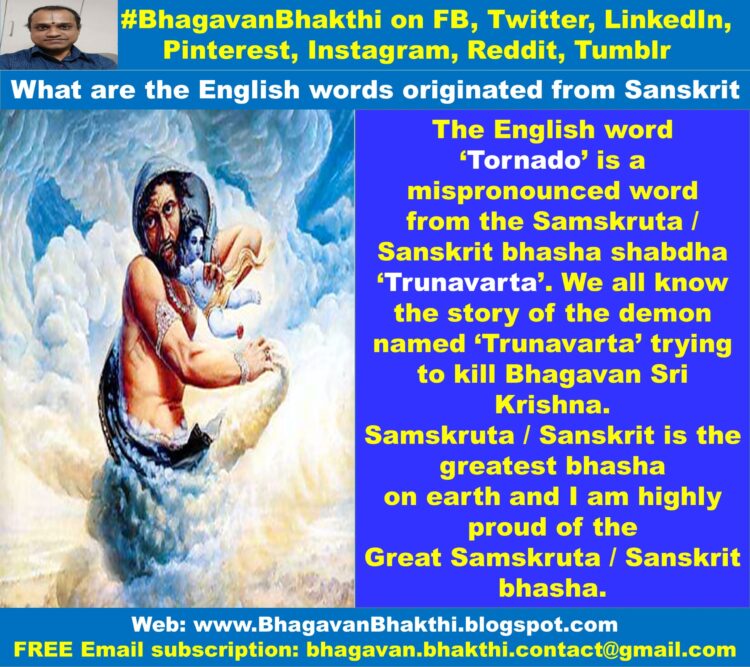 Like most of the European languages (this also includes languages used in North America, South America, Australia and Africa) have been using the Samskruta / Sanskrit language directly.

Also many Asian languages have taken Sanskrit language directly and also been using it indirectly.

I want the world to know about the greatness of Bharata / India and its bhasha (language), culture etc.

In this regard I have made lot of research since past 2 decades now, and found out many words are from the greatest language of the world, that is Sanskrit.

This program has been taken up only to showcase the greatness of Bharata / India and its language Sanskrit and not to insult or defame any other language(s) and definitely not to hurt the sentiments of anybody.

Let us start to know the words: 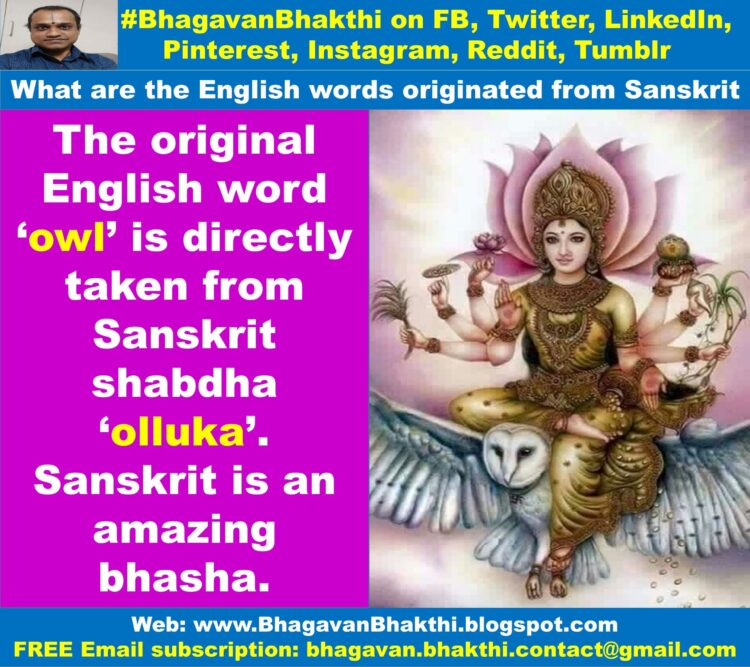 List of English words of Sanskrit origin are as given below:

Mix or mixture from mishranam

Let us continue to know more such kind of words:

Singapore: In Sanskrit the word Singa means Lion. Pore / pura means a place. Thus we can conclude that the country Singapore is a place where either real lions are / were living or it was a place where brave people were living.

This means that way back, Singapore was part of Bharata / India.

English numerical numbers : All originated from Sanskrit integers, like English ‘one’ is a simple form of onde / ondu / Vande / Vandu. ‘Two’ is from Dwi, ‘Three’ is from Tri (E.g., Lord Shiva is known as Trinetra), etc.

The cosmetics’ company name Lakme is taken from our Goddess name Srimati Lakshmi Devi. The English word ‘Luck’ has been originated from Sanksrit word Lakshmi.

Bhutan (name of an Asian continent country): Bhutan is purely a Sanskrit word.

Let us understand how?

In Sanskrit ‘Bhu’ means Bhudevi / Mother Earth, Tan / Taan / Taana means ‘stan’ / a place. So the total meaning of Bhutan is a place on Mother Earth.

Maldives: Maldives, one of the smallest country used to be an Hindu country once.

Name: We all know the meaning of the English word ‘Name’. But do we know how this word came into existence. In Sanskrit, for name we call it as ‘Naama / Naamam / Naam.

Look at little closely, the English word name has the root from our Sanskrit word Naama / Naamam / Naam.

Mix / Mixture: In Sanskrit we have a word called ‘Mishrana’. This means mix in English. Sanskrit word Mishrana / Mishran is the original word of the Englsih word ‘Mix / Mixture.

Also sometimes this word is used for someone who is a chef and who serves food.

In Sikhism, the words used are from Sanskrit itself. Sikhs’ names like Inderjeet (who has won over Demigod Indra), Manpreet (Mana preeta – Mana means heart, preeta means lovable), like these other names like Kuldeep, Jeetendra, Dharmendra, etc are all Hindu names.

Goa: Very popular and the smallest state of India is very old place. Even during nearly 900 years before, during the Sri Madhvacharya ji’s period Goa had got the same name. In Sanskrit ‘Goa’ means ‘Cow’.

Islam word ‘Musalman’: Many of us know the English word ‘Man’ came into existence from our Sanskrit word ‘Manu’. Now let us understand the word Musalman.

In Sanskrit ‘Musalam / Musala / Musal means a long rod to make chillies into powder. Even today the word Musal is been used by many Indian languages like Marathi, Gujarati, Rajastani etc.

I have written a separate post on this, “Roman calendar names originated from Sanskrit”. You can click the below link for more information:

Shame: The English word shame is taken from the Sanskrit word ‘santAna’ (सन्तान).

Owl: English word ‘Owl’ is the short form of the Sanskrit word ‘Olluka’. Olluka = Owl + U + Ka. Even today many Indian languages use the word ‘Olu / Ollu’.

M’ru: This is the Egyptian name for pyramid. Many of us know the great mountain Meru in our Sanatana Dharma word.

Egyptians were building pyramids in comparison with the Mount Meru. Egyptian’s M’ru is taken from the Sanskrit word Meru parvat.

Moshe and Moses: The Egyptian name Moshe and the Christian name Moses are originally from Sanskrit name Mahesh.

Sun: Many of us know in Sanskrit, we call ‘Sun’ in different names. Like Bhaskara, Prabhakara, Surya etc.

The interesting fact is the English word ‘Sun’ has originated Sanskrit word Surya. Surya = Sur + ya = Sun + ya = Sun.

Sahara desert: Many of us know Sahara is the biggest desert in the world and is in northern Africa.

In deserted parts of India, there is a tribe known as ‘Sahariya’ in Rajasthan. ‘Sahara’ is derived from the Indian word ‘Sahariya’.

Ram-ses an Egyptian word: Ram-ses is the title given to Egyptian kings. Even in India, a King is known as ‘Isha’ (Isha / Eesha also the name of our Hindu gods like Ramesha, Umesha, Ganesha, etc).

Isha means who has control over something or someone. A King should have the control over his place and people.

Here we can clearly see the Egyptian Kings’ name as Ram-ses, which has originated from Sanskrit name ‘Ramesha’ or ‘Ramesh’.

Maturai: It was a place where Joseph and Mary took Jesus to keep Herod from killing Jesus.
Many of us know the great city of Bharata Mathura.
Egypt river Nile / Nila: In Sanskrit the color blue is known as Neela / Nila.
River water when seen from upper view the color will be blue.
Egypt word Se-sastris: Se-sastris in Egypt is known as leaders and warriors.
In Indian language the warriors use ‘Astra & Shastra’ in the war.
Solar system: We have a word in Sanskrit called ‘Sauramandal’, this means
Solar system in English.
Sauramandal = Saura + mandal = Soura + mandal = Soula
+ mandal = Solar + mandal = Solar.
European people have their own accent and they spell words differently compared to Bharata vaasis. Why European, our north Indians accent is very different to south Indians, but words are same.
Juggernaut: This word is the mispronounced word of Bhagavan Sri Hari name Jagannatha / Jagannath.
Holiday: In English Holiday means an auspicious day.
In India we celebrate ‘Holi’ as an auspicious day.
Day: This word is a short form of the Sanskrit word Divasam.
Divasam = Div + a + sam = Diy + a sam = Day + a + sam = Day.
I have discovered a big secret with the comparison of our Sanatana Dharma and corresponding religion of Egypt. 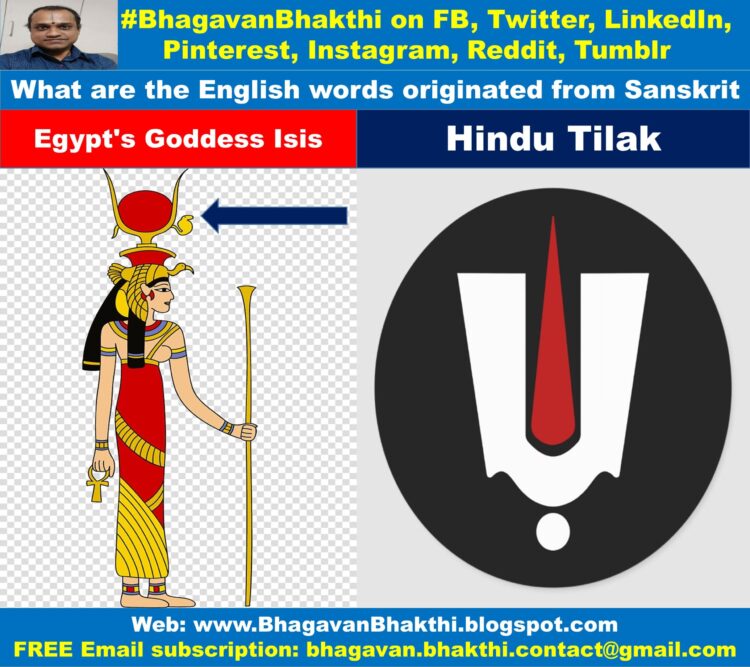