Mahabharata is the greatest epic that the mankind has ever known. This is written by Bhagavan Sri Veda Vyasa ji, who is an avatar of Bhagavan Sri Vishnu.

Let us know which all deities / Devatas took birth during the Mahabharata period: 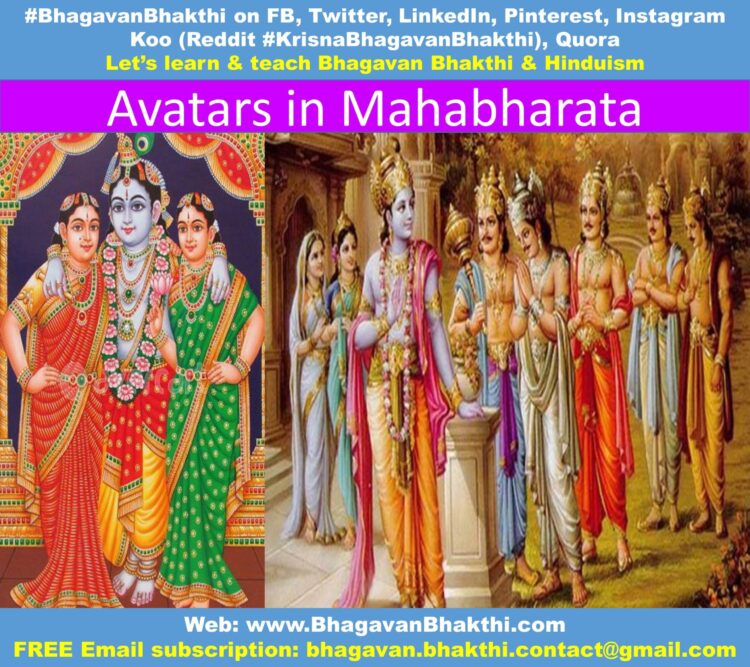 List of avatars in Mahabharata are as given below:

Bhima: Lord Vayudeva. He is same as Sri Hanuman during Ramayana period.

Devi: She was wife of Bhima and was an avatar of Rakaa (She is a Poornima Chandra Abhimani Devata). She was the daughter of Rohini and Vasudeva. She was a sister of Lord Krishna.

Arjuna: Lord Indradeva. He is same as Sri Vali (read as Vaali) in Sri Ramayana.

Iravantha: He was a son of Arjuna and Ulupi. And he was an avatar of the graha (planet) Mangala (Kuja). 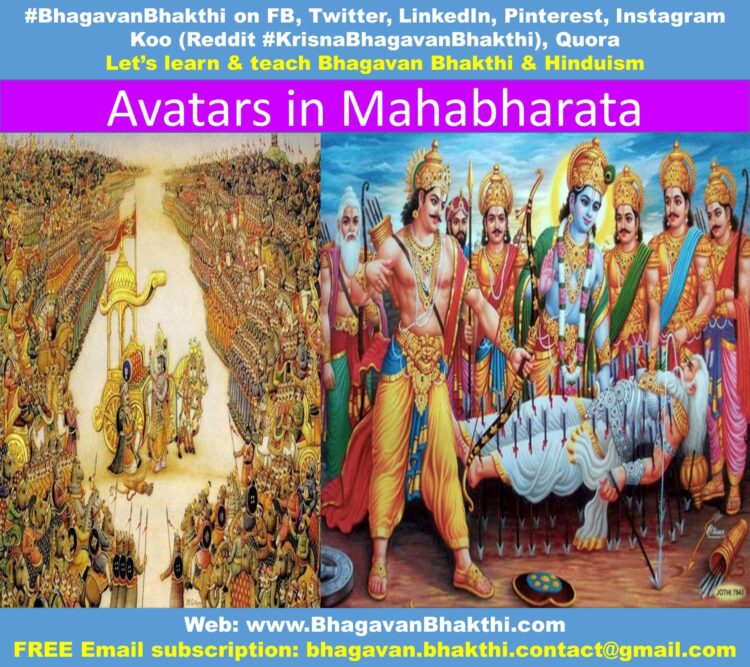 Karna: Lord Surya Deva. He is same as Sri Sugriva in Sri Ramayana.

Bhishma: The 8th Vasu and his name is Dyu. Bhishma had an amsha (part) of the Sri Brahma Deva.

Vidura: Lord Yamadeva (Both Vidura and Yudhisthira are same with two different bodies)

Subhadra: She is the same who was there with Maata Sita Devi in the Lanka, her name in her previous life was Trijata (the rakshashi was supported and did seva of Sita Devi)

Bhadra Devi: She is one among the Ashtta Bharya (8 wives) of Bhagavan Sri Krishna

Kalindi Devi: She is one among the Ashtta Bharya (8 wives) of Bhagavan Sri Krishna

Mitravinda Devi: She is one among the Ashtta Bharya (8 wives) of Bhagavan Sri Krishna

Nagnajiti / Satya Devi: She is one among the Ashtta Bharya (8 wives) of Bhagavan Sri Krishna

Lakshana / Lakshmana Devi: She is one among the Ashtta Bharya (8 wives) of Bhagavan Sri Krishna 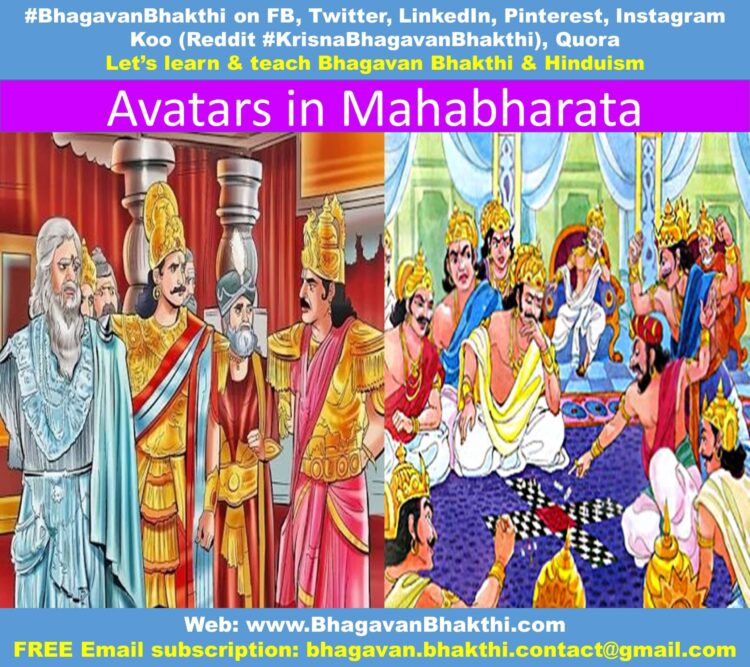 Duryodhana: Kali (read as kali and not as kaali) the rakshasa (demon). He is the same, who is ruling the Kaliyuga. Because of him only Kaliyuga is known as Kaliyuga. Kali’s wife name is called Alakshmi.

Shakuni: Similarly like Kali, Shakuni is the form of Dvapara Yuga. The Yuga which comes before the Kali Yuga.

Rukmi: He is the eldest brother of Sri Rukmini Devi. He is the avatar of Aruna Deva (charioteer of Sri Surya Deva).

Dantavakra: Sri Vijaya Deva / Vijaya. He is the door keeper of the Vaikuntta along with Sri Jaya Deva / Jaya. He was same as Kumbhakarana during Ramayana period.

Shishupala: Sri Jaya Deva / Jaya. He is the door keeper of the Vaikuntta along with Sri Vijaya Deva / Vijaya.

Vasudeva: He is the father of Bhagavan Sri Krishna (read as Vasudeva and not as Vaasudeva). He is the avatar of svayam Sri Kashyapa Maharushi. He is the husband of Sri Devaki Devi.

Pandu: He was Pravaha Maruta

Hanuman: He is the svayam avatar of Sri Vayu Deva. Both Bhima and Hanuman are one and the same. In Kaliyuga, He took birth as Sri Madaanandateerthabhagavadpaadaacharya Ji (Sri Madvacharya Ji).

Many tell He is the part or full incarnation of Lord Sri Rudra Deva / Sri Shiva. But it is completely untrue as nowhere it is written like that. It is only the imagination of few people and nothing else. 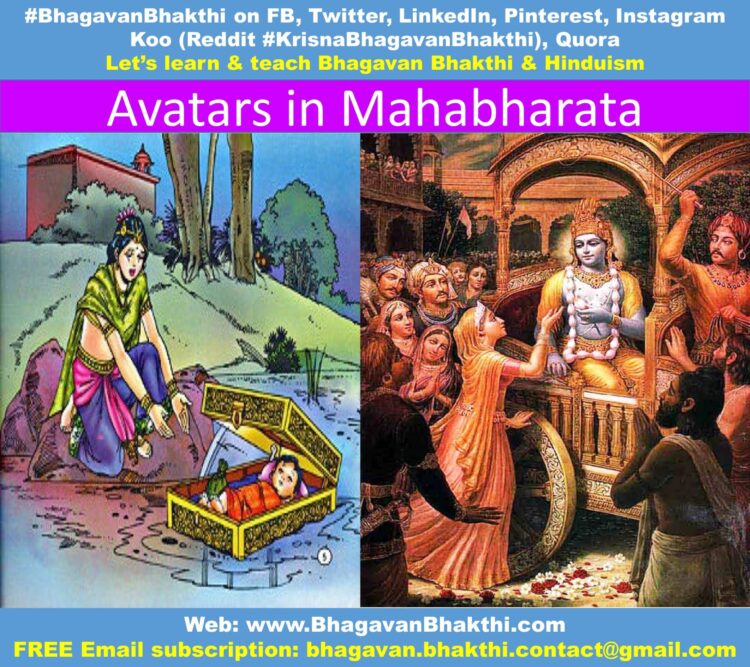 Ashvattama: He is the incarnation of Sri Rudra Deva / Sri Shiva.

Shantanu / Santanu: He is the avatar of Sri Varuna Deva. He is the same as the Sri Samudra Deva (Ocean).

Durvasa Muni: He is the incarnation of Sri Rudra Deva / Sri Shiva.

Dhrishttadyumna: He is the avatar of Sri Agni Deva.

Jarasandha: He was Viprachitti in this earlier life.

Kritavarma: One of the Maruta.

Satyaki: One among the Maruta. He is one of the Krishna paksh abhimani devata.

Nanda Maharaja: Drona (one of the Vasu). Not the Dronacharya, but a Vasu (pronounce it as Vasu and not as Vaasu).

Yashoda Devi: Dhara (one of the Vasu). Not the Bhoodevi, but a Vasu (pronounce it as Vasu and not as Vaasu).

Mrisa : Demon lady Mrisa was born as Dushala. Kuhu was also present as one half of the body.

Paudraka : He was Vena in his earlier life. 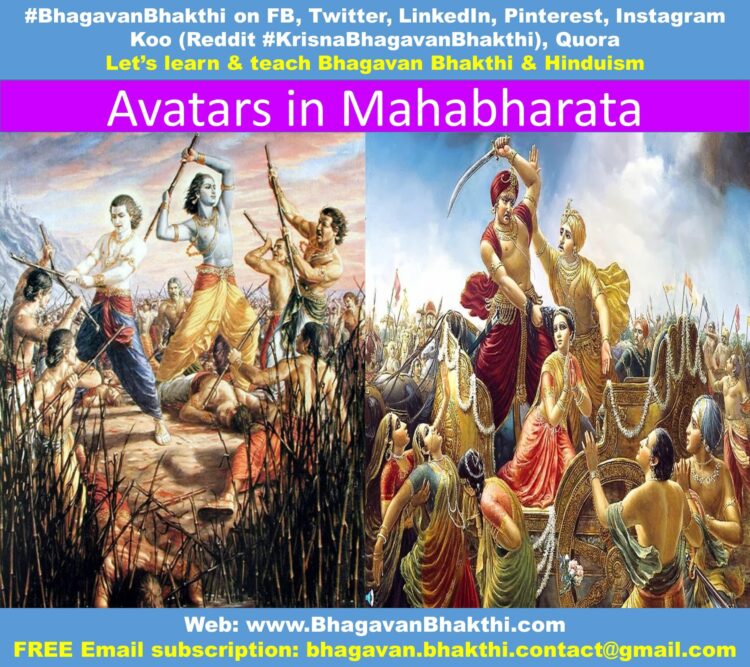 Akrura : He was a Gandharva named Kishora. Svayambhuva manu as well as Brahma were partially present in him.

Drupada : He was an avatar of the Gahdharva Devata singer Hoohoo

Virata : He was the Gandharva (divine) singer Haha.

Sanjaya : He was an avatar of a Gandharva Tumburu.

Shalya : He was the brother of Prahalada called Sahalada in the earlier life.

Salva : He was an avatar of Bali chakravarti.

Kichaka : He was reborn as Kichaka (Original and reincarnation name both are same).

Bhagadatta : He was an avatar of Kubera (Treta Yuga / Ramayana). The demon Baskala was partially present in him as am amsha.

Yuyudhana : He was born as a son of Satyaka and was known as Satyaki. Garuda, Samvaha Maruta, and Vishnu Chakra, i.e. Pradyumna, were partially present in him as amsha.

Kritavarma : He was the son of Hridika, had the presence of Panchajanya, i.e. Aniruddha, and Pravaha Maruta partially.

Kuntibhoja : He (Kunti father) was Kurma Maruta in his original form.

Purochana : He was Prahasta (during Ramayana period)

Aniruddha : Sri Krishna’s grandson and son of Pradhyumna was the same    who was born as Shatrugna in the Ramayana period.

Babruvahana : He (Arjuna and Chitrangada son) is the avatar of Jayanta, Sri Indra Deva’s son.

Bahleeka : Maharaja (brother of Santanu – father of Bhisma) was an avatar of Prahalada (son of Hiranyakashipu and Kayalu). His moola (original) life Shankukarna (he lives in Satya loka).

Bhuri : He was an avatar of AjaikapAt Rudra.

ChekitAna : He was an avatar of Pratibha (a maruta).

Chitrangadha : She (Arjuna’s wife) was an avatar of Sri Sachi Devi (Indra wife). She was born as Tara (Vaali’s wife) during the Ramayana period. Both    Arjuna and Vaali were the avatars of Indra Deva.

Dhritarashtra : He was an avatar of a Gandharva named Hamsa. Vayu Deva was also present as amsha in him.

Kritavarma : He was an avatar of Shukla-paksha-abhimAni-devata.

KripAchArya : He was an avatar of ViShkambha (one of the 11 Rudras and his parents were Sharadwana & Urvashi).

Tataka :She was born as Putana during the Mahabharata period.

Prativindya : He was the son of Yudhishthira and Draupadi. He was an avatar of PurUrava (He was Vasu).

Rohini :She (Vasudeva’s wife) was the mother of Balarama. She was an  avatar of Surabhi (wife of Kashyapa). Vasudeva is an avatar of  Kashyapa.

SarvOttunga : He was the son of Bhima & Devi. He was an avatar of Prana vayu.

Amba / Shikhandi : She was the avatar of VarAngi (wife of Dyu-Vasu). Dyu was reborn as Bhishma.

Somadatta :He was an avatar of PatratApa Rudra.

Sharvatrata : He was the son of Bhima and Kali Devi.

SahadEva : He (son of Jarasandha) was an avatar of PatratApa one of 11 rudras.

Shrutasoma : He (son of Bhimasena and Draupadi) was an avatar of Ardrava – a Vasu.

ShrutakIrti : He (son of Arjuna and Draupadi) was an avatar of DhU-a Vasu.

ShatAnIka : He (son of Nakula and Draupadi) was an avatar of Lochana-a Vasu.

ShrutakarmA (son of Sahadeva and Draupadi) was an avatar of Kratu-a Vasu.

Uttamauja : He was a son of Drupada. He was an avatar of ParA-a Vasu.

Uddhava : He (Sri Krishna’s cousin brother) was a son Brihaspati. Even  Dronacharya was an avatar of Brihaspati. Brihaspati had taken two  avatars during the Mahabharata period.

Veerasena (Chitravahana) : He (father of Chitrangada – wife of Arjuna) was an avatar of Tvashtru Aditya one of 12 Adityas.

VishOka : (Sri Krishna and Kubja Kanya’s son). He became the sarati / charioteer for Bhima’s during the Great Mahabharata war.

To know which all deities / Devatas took avatars during Ramayana, you can click the below link:

This will be regularly updated, please visit after few days for the latest updates.