Namaste friends, how are you doing today?

Today let us learn an unknown secret which is not known to many people even in today’s modern world.

Sanskrit is the oldest language on earth. Sanskrit is as old as this universe and earth itself.

Sanskrit is existing on this earth since the ‘aadi kalam’, that is, from grand unknown time.

Similarly, Sanskrit will stay on this earth until the ‘ananta kalam’, that is, grand infinite age. 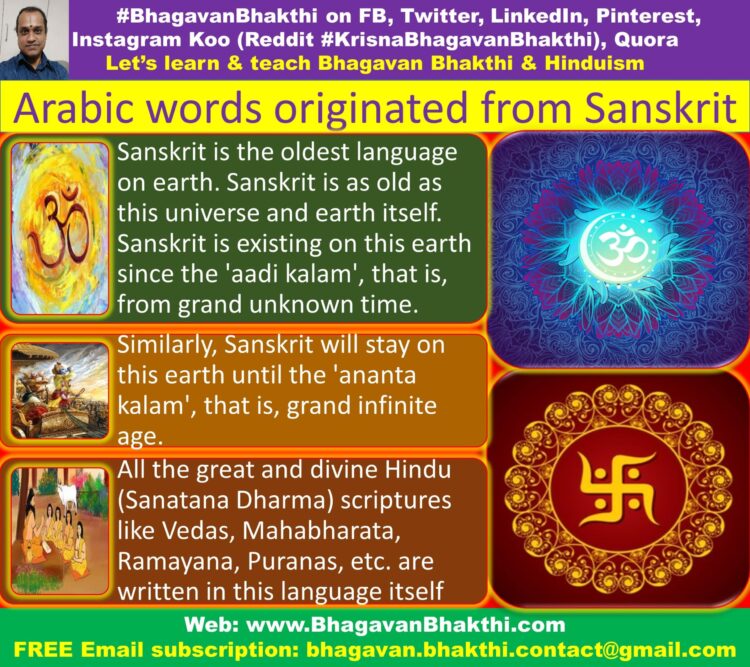 All the great and divine Hindu (Sanatana Dharma) scriptures like Vedas, Mahabharata, Ramayana, Puranas, etc. are written in this language itself.

Now, let us know a long list of Arabic words that are either directly or indirectly originated from Sanskrit.

List of Arabic words originated from Sanskrit are as given below:

This is been copied by Muslims.

For example there are so many countries with the additional word Stan like in Pakistan, Afghanistan, Turkmenistan etc…

The given samskruta / Sanskrit word is a tongue twister.

Very easily it can be understood the arabic / islamic / muslim word is taken from the Sanskrit word.

Ramadan / Ramazan: It is one of the holiest month for Muslims.

In this month, they do dhyana (chant) of their god Allah.

In Bharatiya Sanatana Dharma, it is very clearly described that doing dhyana of Bhagavan Sri Rama is of the highest auspicious karma (work / job).

Very easily, we can understand that the Islamic word ‘Ramadan / Ramazan’ is from the samskruta / Sanskrit word ‘Ramadhyana / Ramadhyan’.

This means, one should do dhyana (chant) the name of Bhagavan Sri Rama.

Kaaba: Many of us know that in Bharatiya sampradaya, the Bhagavan Sri Krishna / Sri Rama is kept in the garbha gudi (garbha sthala) in any of the temples.

Even for Muslims, the main god Allah is present in the Kaaba stone. 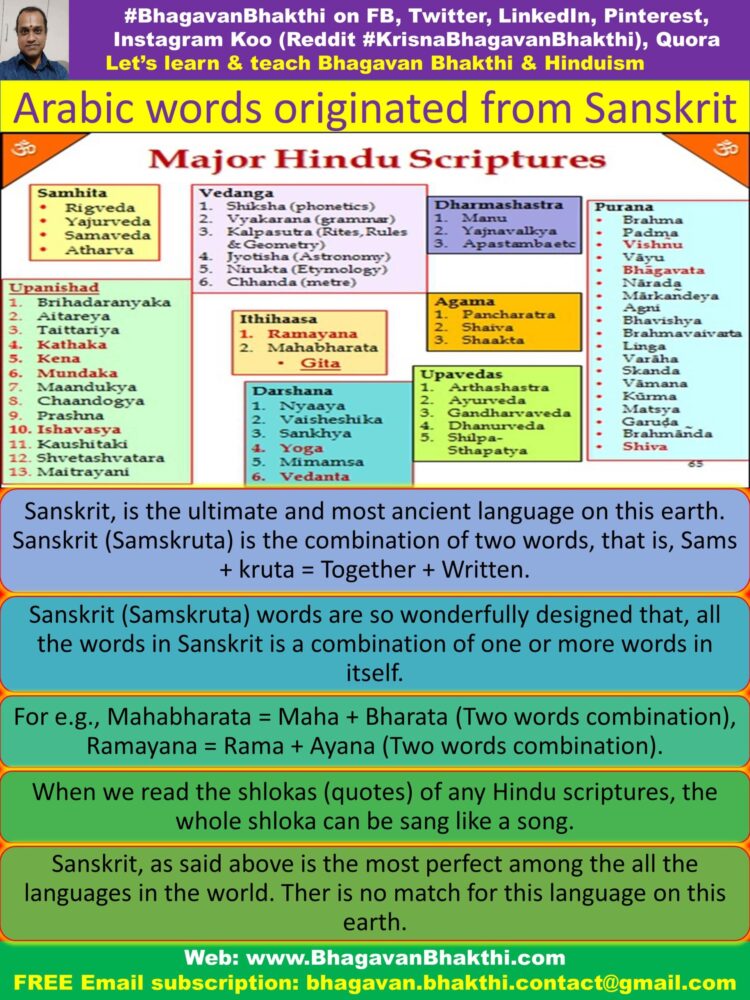 Shia / Shiites (Islam): In Sanskrit shia / shiites are a group of people.

No need to explain anything further.

Allah (Islam) / Alpha (Rome): These words are very popular all over the world.

First is the god for every Muslim and word alpha is the starting alphabet in Rome.

These words starts with ‘ಅ / अ / a’. (I am the Alpha and the Omega, the First and the Last, the Beginning and the End.— Revelation 22:13, New International Version).

One best example to understand this is that, Sri Krishna in Sri Bhagavad Geeta says ‘I am the ‘ಅ / अ / a’.

Very clearly the above two words are from Sanskrit bhasha only and nothing else.

Islam: Many of us know that Sri Shiva / Sri Rudradeva is also called as ‘Isha / Esha / Isa’.

Thus, we can understand that the Islamic word Islam is the short form of the Sanskrit word ‘Isaalayam’.

(One should note that the greatest Isha is swayam Sri Bhagavan Sri Krishna / Vishnu).

Arab : This is taken from the Sanskrit word ‘arava / arav’.

Usually Arabic people use ‘ba’ instead of ‘va’ as used in Sanskrit.

It is much easier to pronounce ‘si’, than ‘shoon’.

Very clearly the Arabic word is a mispronounced word from the great Sanskrit bhasha. 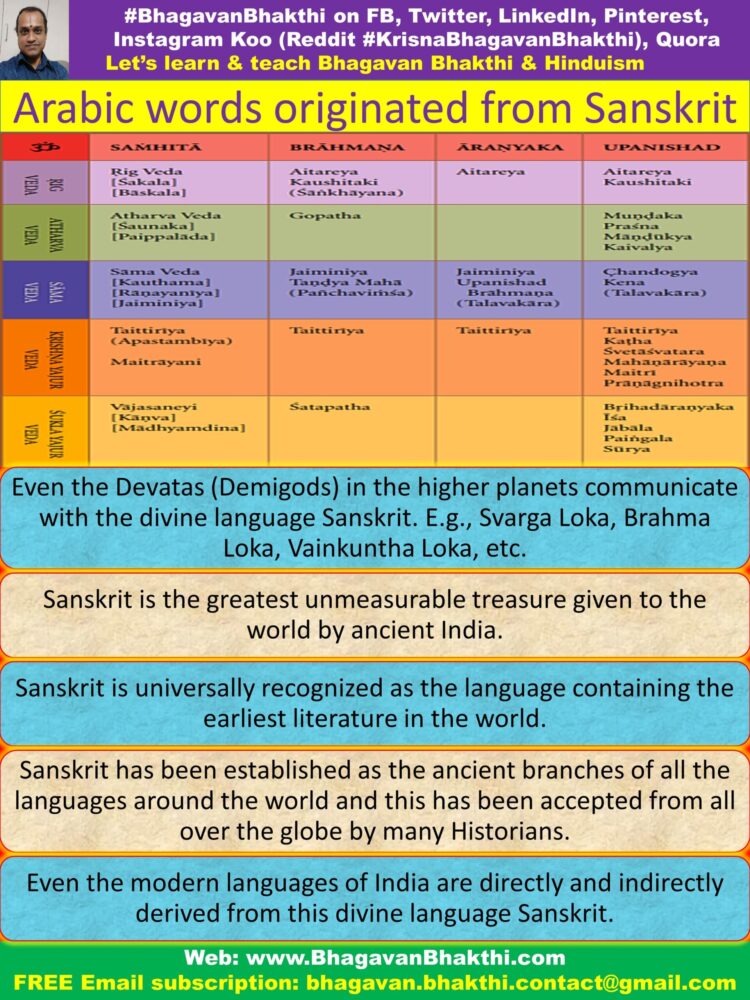 In Sanskrit and other Bharatiya bhAsha, we pronounce one as:

Any person with little bit of thinking ability will understand this Islamic word is corrupted word from the Sanskrit bhasha.

No doubt, its only pronunciation difference and nothing else.

It’s very easy to pronounce ‘et’, when compared to ‘dvit’.

In Sanskrit three means ‘tri / tritiya / tritiyah’. This is directly taken from the Sanskrit bhasha.

Here ‘char’ of Sanskrit has became just ‘ar’ in Islam.

Again, its just and only difference in pronunciation. Another corrupted word.

Settah = set + tah = shash + Ti. Again only difference is in the pronunciation.

In Islam ashTa has become only ‘ta’ and ‘Tamya’ of Sanskrit has become ‘maniya’.

Again only difference is the pronunciation and nothing else. 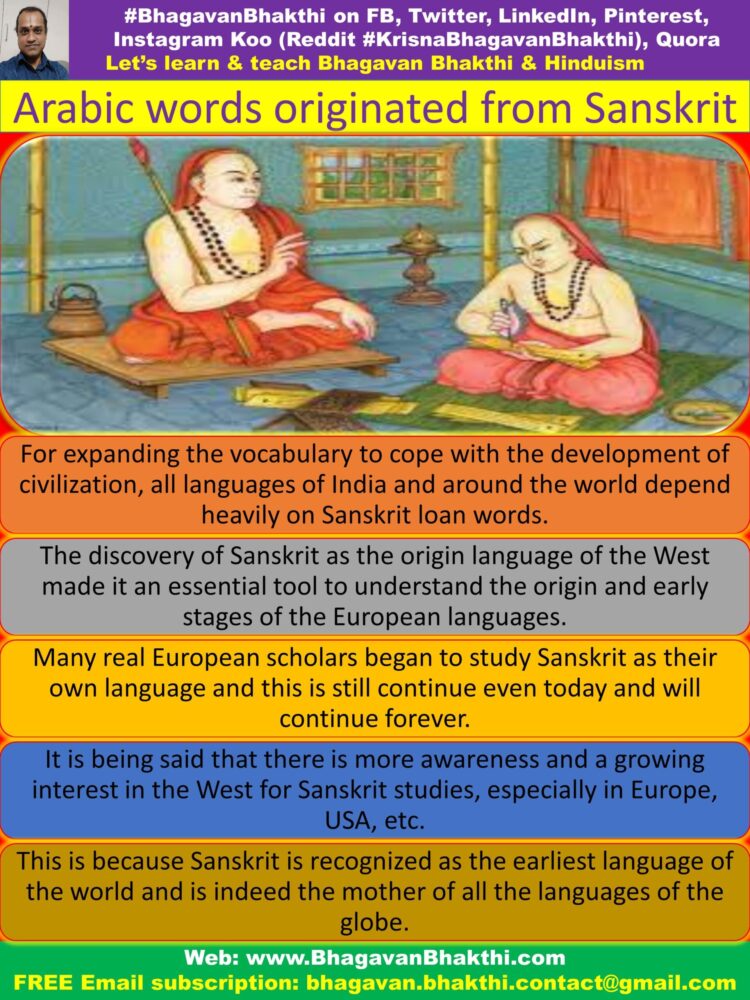 We have already seen that islamic numerals are taken from the Sanskrit bhasha.

This must also be a mispronounced word.

What more proof we need to tell that Islam is taken from the great Sanskrit bhasha.

Now we can understand the similarity. Sri Samskrutaaya namaha.

Musalman: Many of us know the English word ‘Man’ came into existence from our Sanskrit word ‘Manu’.

Even today the word Musal is been used by many Indian languages like Marathi, Gujarati, Rajasthani etc.

Everything is from Bharatiya Sanskrit Sampradaya. Do remember we have the word “Hanuman”.

Here ‘alag’ means different and ‘vadi’ means someone who is a speaker / critic.

In Sanskrit also ‘vadi’ / ‘vAdi’ means a speaker, a critic.

Many must have heard the Sanskrit word ‘vAdam / vAda / vAd’ (read as vaadam / vaada / vaad).

In south there was a great santa / sanyAsi (saint) called sri vAdiraja who lived for 120 years and later went into brindAvana. 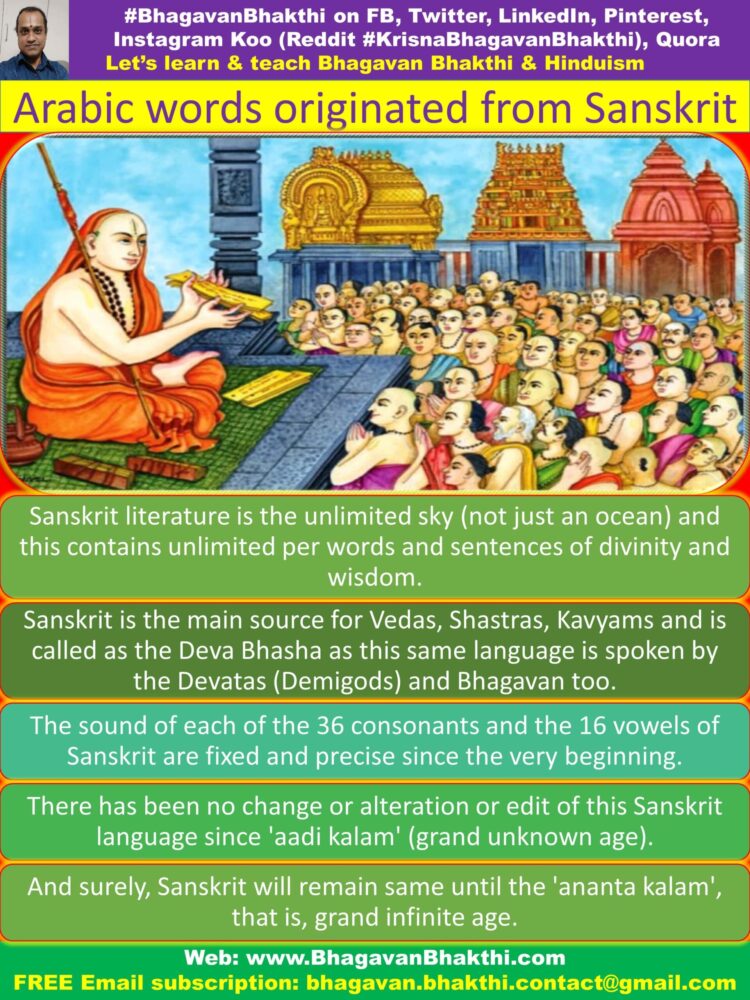 Saare: The Urdu / Islam word saare is been taken from the Sanskrit word  ‘sarvam / sarva / sarv’.

Alladin / Aladdin / Aladeen / Alladeen: Here the full meaning of this word is ‘donated / given by Allah’.

Also, in many Bharatiya / Indian languages even today we use this word as:

Any Islamic word ending with ‘ddin / din / deen’ is taken from Sanskrit.

Another Islamic word is ‘mujahidin / mujahideen’.

Khatna: In Urdu / Arabic khatna means cutting a part of their body as per Islamic rituals.

Very clearly the classic Islamic word is taken from the Sanskrit bhasha word.

Parvadigar: In Islam and especially in Sufism, this word is used.

The meaning of this word is ‘the god who lives on mountain’.

Very very clearly the Islam word is copied from the great and one & only great Sanskrit bhasha.

Shahada: The Islamic profession of faith, “There is no god but Allah, and Muhammad is his messenger”:

The first of the Pillars of Islam. Origin of shahada. Arabic. From the Arabic word shahādah literally, witness.

PLEASE NOTE THAT THIS IS TAKEN FROM THE INTERNET. 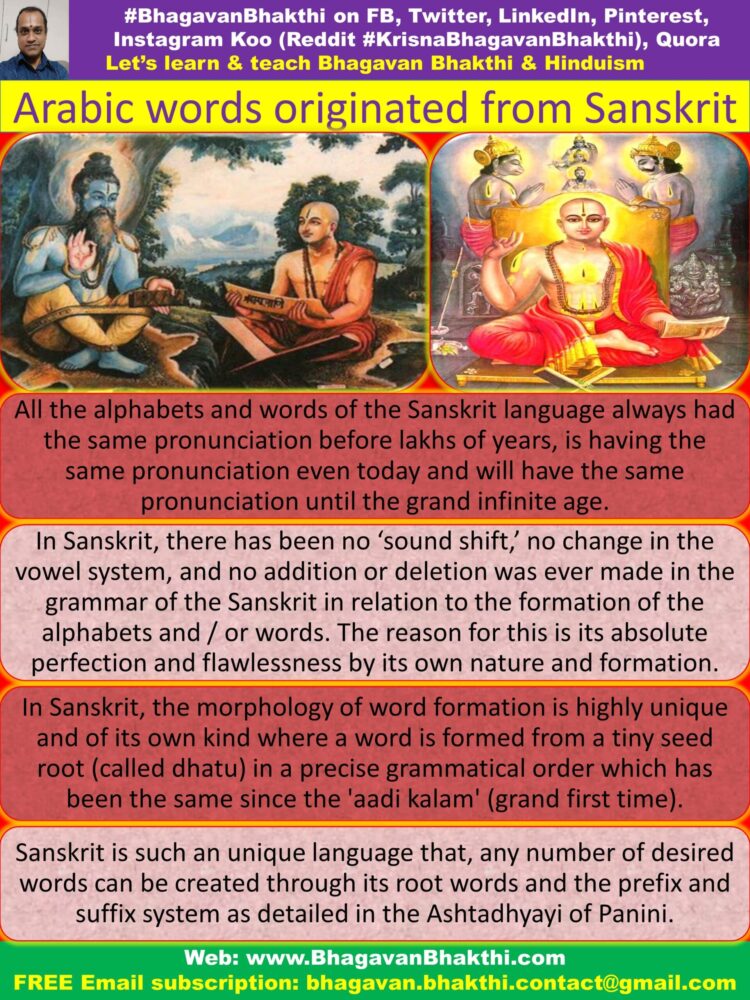 The Kurueshi signifies a descendant from the Indian Kuru dynasty that once ruled many parts of the World.

This also includes the Middle East regions before the Mahabharat war (until over 5000 years ago).

The war was between the Kurus (Duryodhana and others) and the Pandavas.

And the Kurus were defeated which ended their rule.

This Kurus are mentioned in the Bhagavad-Gita.

Again very clearly we can understand that everything is from our great land Bharata and it’s great bhasha Sanskrit.

(In Sanskrit the meaning of lotus has different words, in that one been nalini).

In Sanskrit, road means ‘rathya’ or in many Indian languages, it is pronounced as ‘rAsta (Hindi) / raste (Kannada) etc.

Again, another word taken from the great bhasha Sanskrit bhasha.

It is general if someone has to accept something, than it has to be done using mind.

Again, another copied word from Sanskrit.

Moin (Islam) / Moon (English): Both of these words are directly taken from the great Sanskrit bhasha word Mohana.

Here all the three words, Moin (Islam), Moon (English) and Mohana (Sanskrit) has the same meaning, that is Moon.

Golgumbaz (Islam): This word is taken from our great Sanskrit.

In Sanskrit Gola means something which is in round shape and gumbaz means a praying room in Islam.

In Sanskrit Gol = round shape and matha = A place of worship of Gurus and God.

In Sanskrit the word maTha / maTa means a praying room or a place or a general place of worship.

Raana (Islam): One of the meaning of this word in Islam something related to warfare, someone who is ready to fight etc.

In Sanskrit, ‘raNa / रण ‘ (read as rana / ran and not as raana) means something is which is related to fighting in the war.

For example ranabhoomi. This means a place to fight. Here ranabhoomi = rana + bhoomi.

This means who will explain the greatness of Bharatiya Sanatana Dharma’s history.

In simple words a story teller.

Also Prophet or Paigambar is the one who brings the message of the God.

The above said words are very similar to the given Sanskrit words.

And definitely these words Prophet and Paigambar is nothing but a mispronounced word from our great Sanskrit bhasha.

But we have to. This is directly taken from our great Sanskrit bhasha word ‘Arya’ (read as aarya).

It is not that they had come to Bharata.

Instead, we were present all over the globe and their (Arabian) pronunciation is different than ours.

Thus these people have their own accent (even India we have different accents present).

Iqbal (or Equal of English): In Arabic / Urdu, Iqbal means something related to first.

Don’t go with spelling, but instead watch the pronunciation.

Alfaz: Arabic or Europeans can’t pronounce ‘sha / श’ easily. Thus they use either ‘za or fa’.

The Arabic word ‘alfaz’ is taken from the Sanskrit word ‘akshara ‘ akshar’.

We should remember that in Islam, usually they use ‘al’ before start of many words.

Abraham: In Islam they believe in their ‘Allah’ who is not visible to them.

In Sanatana Dharma / Hinduism, we believe in a Brahma / Bhagavan who is visible to us.

Means ‘Brahma’ is visible to us, where as ‘abraham’ means who is not visible to Islamic people.

In Arabic many they use ‘al’, for example ‘algebra’. Similarly they are using ‘alsukar’ = al + sukar.

sandal (صندل) – sandal: In Sanskrit word is ‘chandanam’ or ‘chandan’.

Usually Arabs and Europeans use ‘fa’ when in we use ‘pa’ or ‘pha’.

Kesara = Ke + Sara (Given importance to second part of Sanskrit word and the whole of Arabic word).

lymun (ليمون) : This means ‘lemon’ in Arabic. The Sanskrit word is ‘nimbU’ (Read as nimboo).

بقرة / روع (baqarat / rue) : This means cow. In Sanskrit it is called Gau. Here rue and Gau is same.

بربري (barbiri) : In Arabic this means barbarian. In Sanskrit it means ‘barbara’.

اللغة (al-lugha) : In Arabic this has the meaning of ‘locale’ (local place). In Sanskrit, ‘loka’ means place.

شطرنج (shatranj) : This has the meaning chess. In Sanskrit it is called as ‘chaturanga / charurang’.

Here Sanskrit ‘cha’ has been mispronounced as ‘sha’ in Arabic.

Usually Arabic people use ‘ba’ instead of ‘va’ of Sanskrit.

E.g., Arava (Arav) of Sanskrit has become Arab of Arabic (See above for this word Arava).

Afat : Apatti (आपत्ति / ಆಪತ್ತಿ / āpatti) is the Sanskrit word for this as suggested by one of the post reader and same is in the comment box below.

I thank for the reader Mr. Jeff for this suggestion (See below comment).

Khushamdeed : This means, welcoming someone with happiness.

The first part of this word, that is, Khusha or kusha is taken from Sanskrit word ‘kushala’ (कुशल / ಕುಶಲ / kuśala).

Tarek : Many of us know the name ‘Tarek Fateh’. In Arabic Tarek means ‘star’ or ‘morning star’.

In Sanskrit also, Taraka means star. Lord Vishnu is called as ‘Tarakaksha‘, as he is having eyes like star.

More words will be added here on the regular basis, do visit after sometime 🙂

If you are aware of any such kind of word(s), please suggest, I will add that (those) to this post.

For more information you can visit these link:

What is the relationship between Sanskrit and other languages