What are astonishing facts about Hinduism (Sanatana Dharma)

Namaste friends, are you doing today? Bhagavan Sri Vishnu blessings to you and your family! 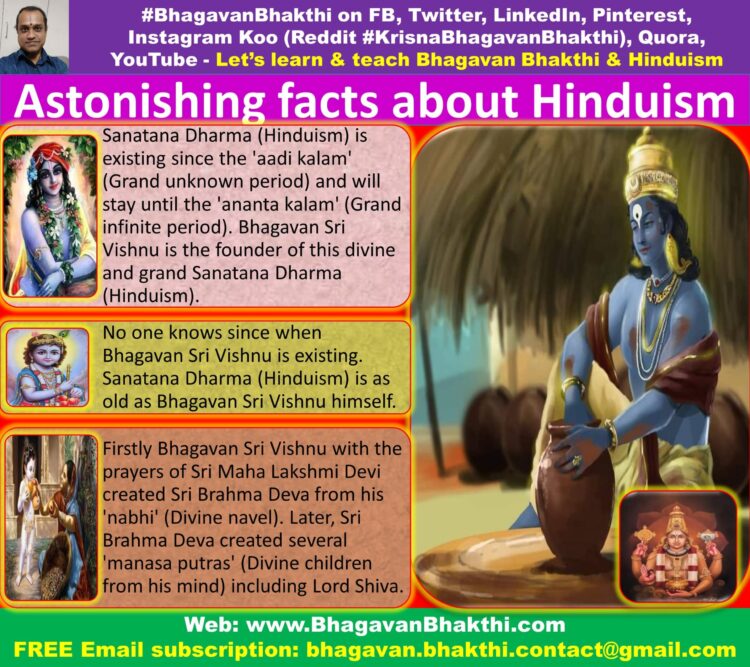 Then Brahmanda (Universe) and others planetary things were created by Sri Brahma Deva as per the instructions by Bhagavan Sri Vishnu.

Thus the creation started. After every Kalpa, a new Sri Brahma Deva is created by Bhagavan Sri Vishnu.

Thus, again the new Sri Brahma Deva will create all the new planetary and related items in each Kalpa. Sanatana Dharma is a cyclic way of existing and there is nothing like end like Qayamat or Tribulation time in Sanatana Dharma.

Now, let us know what is the correct meaning of ‘Aham Brahmasmi’:

This means Sri Hari himself is telling that “I the Parabrahma”. He knows everything and He is inside everybody and everything as antaryami (Divine presence).

But few people have understood the meaning of this in an opposite way.

These people think themselves as “Parabrahma”, means they think everybody can become “Parabrahma” which is a pure stupidity. 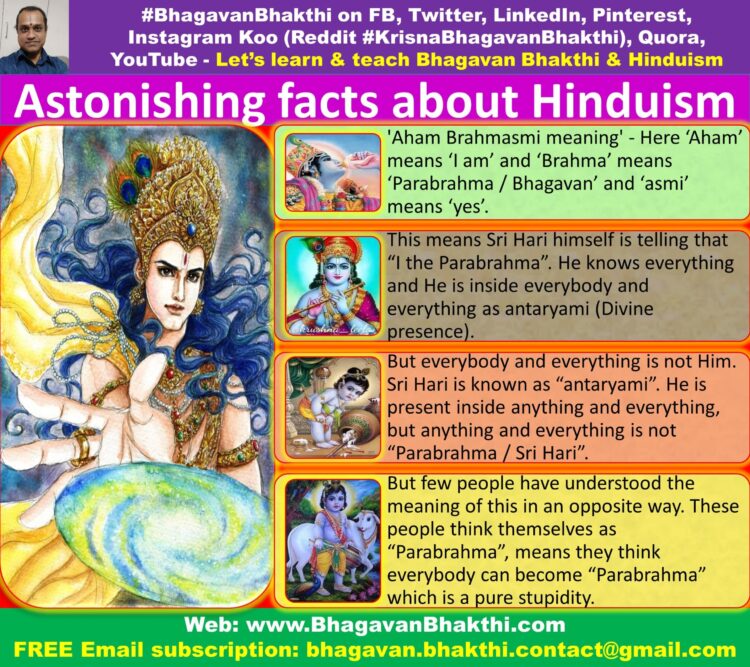 Sanatana Dharma is existing since known age and no one knows the date time frame of the starting point of the Hinduism / Sanatana Dharma.

Unlimited number of Maha Yugas has passed until date.

For more information on the “Hindu measurement of time”, you can visit this below link: 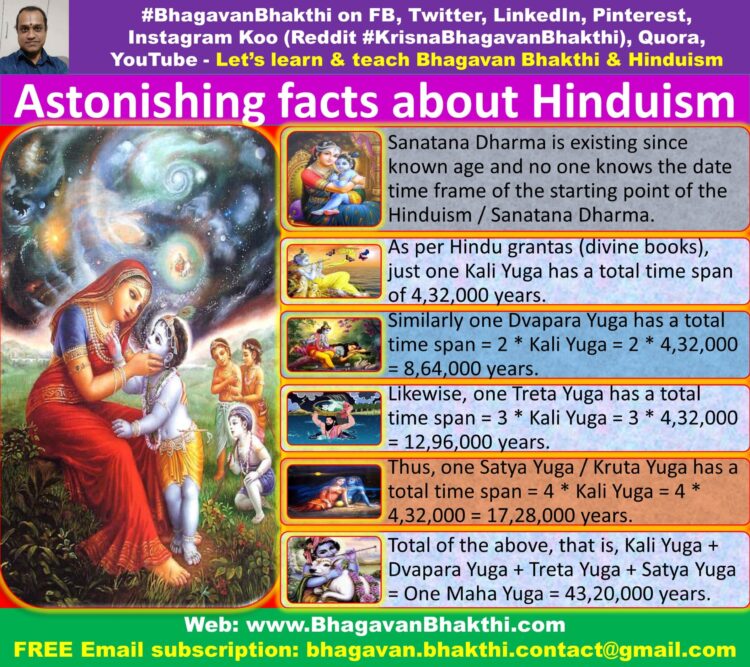 Even Brahma Deva has a life span. That is, after one Maha Kalpa, Bhagavan Sri Vishnu changes Brahma Deva also.

We should note that Brahma Deva is a padavi (rank) and not the name of that Demigod.

After that Brahma Deva completes his 100 years as per his planet (Satya Loka planet), he will be changed and a new Brahma Deva will start his duty as per the instructions of Bhagavan Sri Vishnu.

To know “Who is next Brahma Deva” and other details, you can visit this below link:

Who is next Brahma Deva 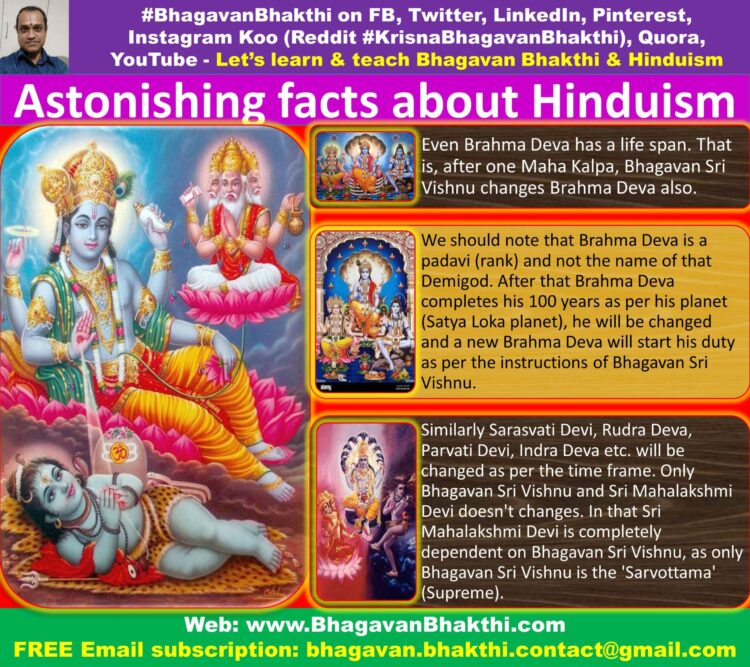 Draupadi Devi is the amalgamation of five divine women and not a single entity:

As said, Draupadi Devi is the amalgamation of these five divine women.

Bharati Devi is the consort of Sri Vayu Deva (Bhima)

Parvati Devi is the consort of Lord Shiva

Sachi Devi is the consort of Indra Deva (Arjuna)

Shyamala Devi is the consort of Yama Deva (Yudhishthira)

Usha Devi is the consort of Ashwini Kumars (Nakula & Sahadeva)

For more information on this, you can visit this link: 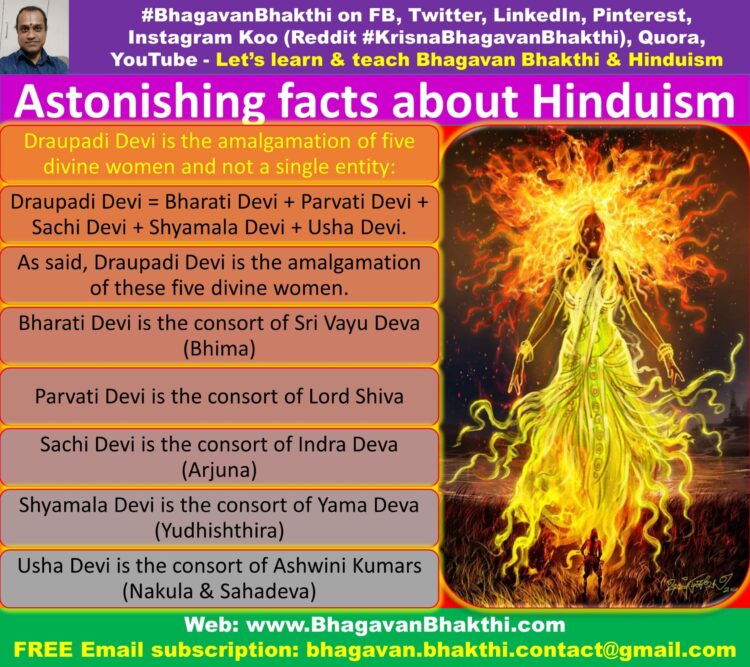 Drona takes birth from a pot (Drona). In Sanskrit, Drona means a pot. His father was Bharadwaja.

Drona was an avatar of Bhrihaspati (Guru of the Devatas).

To know the different avatars in Mahabharata, you can visit this link:

Also similarly, to know the avatars in Ramayana, you can visit this link: 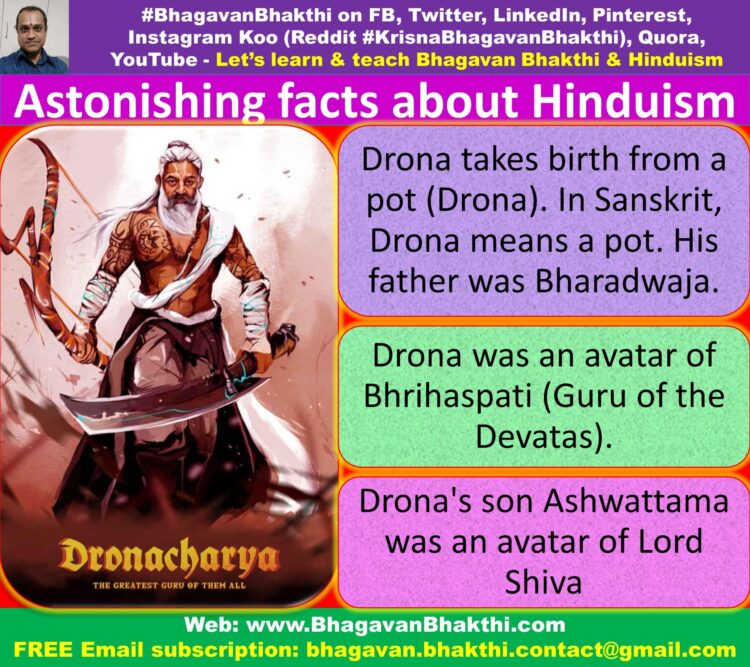 Veda Vaysa Ji is an avatar of Bhagavan Sri Vishnu.

Name Veda Vyasa means, Veda + Vyasa = Vedas + separating. He is the one who separates all the Hindu grantas (divine books) like Vedas, Puranas etc.

This is done as the people of Kali Yuga are most less knowledgeable people and don’t have the capability to understand the Hindu grantas easily.

Thus Veda Vyasa Ji has separated the grantas and given us in more simpler way, so that the people of Kali Yuga should be able to understand.

Another meaning of Vyasa in Sanskrit is diameter. 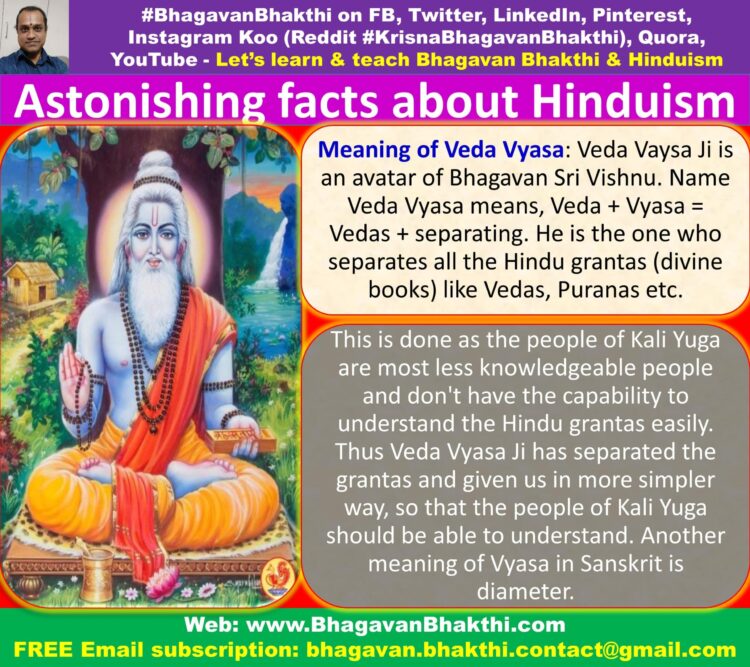 Sanskrit is the root, mother of all languages and the most amazing language on earth:

Sanskrit is the bhasha / language known as ‘Devanagari’, means, this language is spoken by all the Devatas (Demigods) and Bhagavan Sri Vishnu himself.

Here Devanagari = Deva + nagari = Devatas (Demigods) + place. This is the language spoken in the place where Devatas live.

Sanskrit is existing since unknown age. This bhasha / language has the same age as Hindu Sanatana Dharma and no one is aware of the exact age of this language.

Sanskrit is the base and root language of all the languages around the world.

Sanskrit’s words are not just words, these form a whole sentence. Every alphabet in Sanskrit is a word.

In Hinduism there is only one Bhagavan / God. It is only in the modern days people have started to give that Hinduism is not monotheist, but rather it is polytheist.

This is the creation by the Europeans who had came to India and who imagned themselves that they were ruling our country for around 300 years or so.

But they were never were able to rule the great Bharata varsha (India). It was only their imagination.

In Hinduism, there is only Bhagavan, that is, Bhagavan Sri Vishnu is the Bhagavan and all others are his family members. 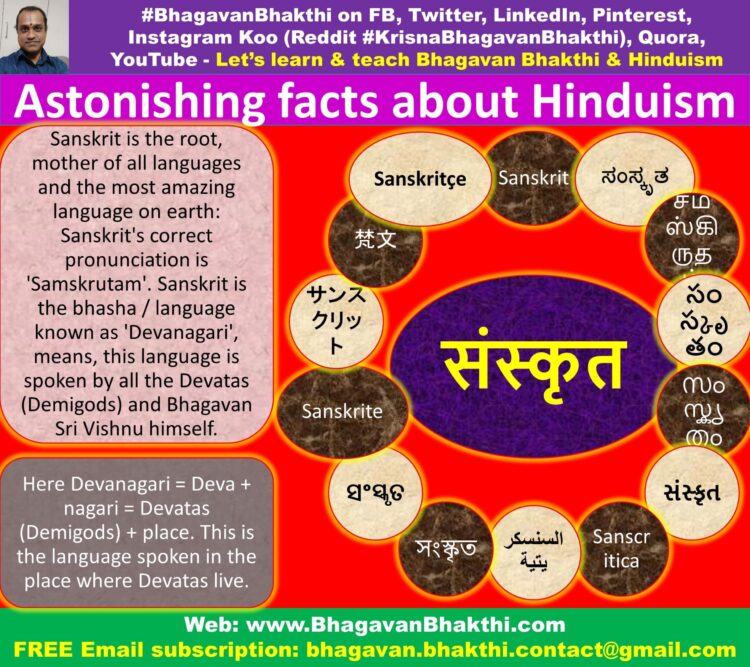 I have written a separate post on this called “Hierarchy of Hindu Gods”. You can visit that post by clicking the below link: