Why did Krishna always helped Pandavas (Greatness of Pandavas)

Just before moving forward, let us have a small brief about Pandavas and their relationship with Pandavas. Pandavas were five brothers namely, Yudhishthira, Bhima, Arjuna, Nakula and Sahadeva.

Kunti Devi’s biological father was Shurasena. He was a Yadava King. Her birth name was Pritha (That’s why Arjuna is called as Partha, that is son of Pritha). 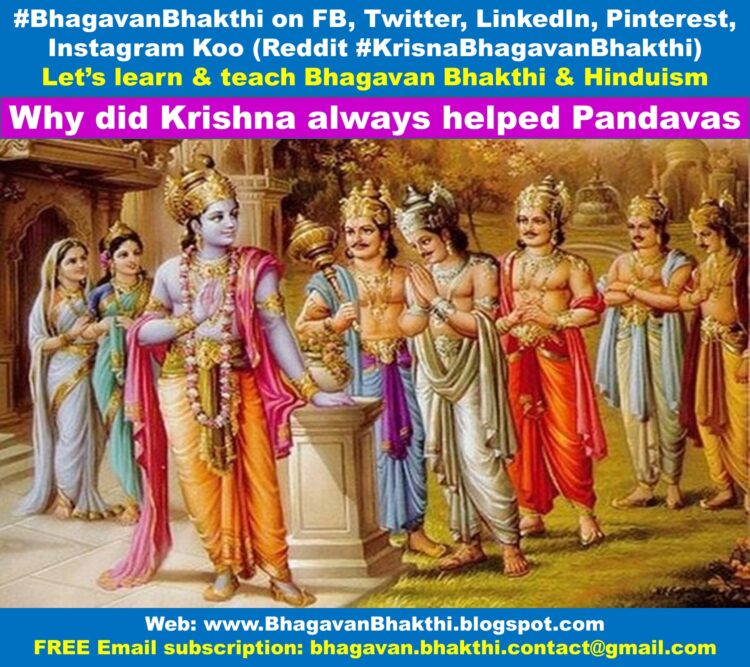 Come on friends, now first let us understand the following:

1. What is the back ground of Pancha Pandavas?

2. Actually, who were Pancha Pandavas?

Let us start from the eldest of the Pandavas:

Here Yudhi means, he is a person when in Yuddha / war, will be Sthira, means someone who can’t be shaken or someone who is always stable (स्थिर / ಸ್ಥಿರ).

Yudhisthira used to be an absolute firm person in all situations and conditions. He was a person who always decided once to do something, used to do that particular work and also in given stipulated time.

His mind was always stable, firm and always convinced about his decisions.

Few more great points about Yudhisthira are as below:

1. Yudhisthira was the man of virtue and goodness.

2. He never ever used to go against Dharma.

3. His another name is called “Dharmaraya” or “Dharmaraja”, means one who follows the GREAT SANATANA DHARMA.

4. With this name he had another name called “Ajaatashatru”, means one who don’t even have a single enemy at all.

5. Yudhisthira was highly learned person and also was a great warrior. He had mastered with the sphere fighting and chariot racing.

6. Also he had great knowledge about the political science, psychology, the GREAT SANATANA DHARMA Shastra etc.

7. He was patient and adaptable. He never wanted the war and also tried to convince his uncle Dhritarashtra and his cousin brother Duryodhana.

8. He forgives the king of Viraat, although the king broke his nose. This happened, when Yudhisthira was continuously praising the Bruhannala (Arjuna) and not Viraat’s son Uttara Kumara.

9. Yudhisthira always respected his elders including his uncle Dhritarashtra and aunt Gandhari even after the GREAT war of Kurukshetra.

11. He almost respected each and every orders of Sri Krishna, except in few cases.

12. Tha shankha / couch of Yudhisthira was called as Ananta Vijaya. 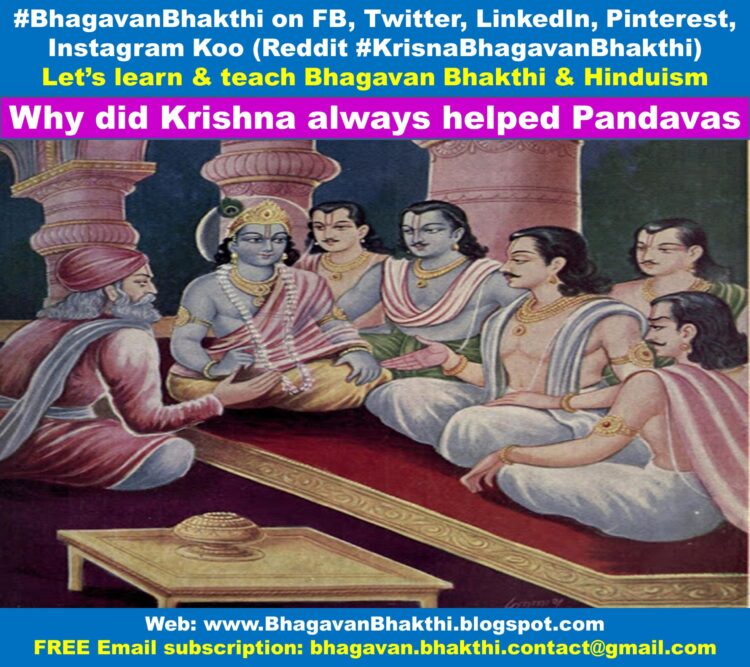 B. Bhima: Meaning of Bhima is

Bhima used to be so terrific that even 1000 elephants were looking as mere ants in front of Bhima.

Bhima is so powerful that he used to easily lift a huge mountain without any hardships. He was having a great body which was not able to be destroyed even by greatest warriors on this earth.

With just one roar, even many many wild animals used to hide in the caves and were not coming out of the caves for weeks together.

Bhima was so powerful that he used to pull out the largest of the trees on the earth without any hardships.

Usually Bhima has been misrepresented nowadays (including on the television series).

But the greatness of Bhima can’t be explained so easily. But still I will try to add few more great points of Bhima as below:

1. Among the Pandavas he used to be the greatest gnani / knowledgeable person.

2. He used to be highly powerful, righteous, handsome, intelligent etc.

3. In Mahabharata he was the main hero after Sri Krishna.

4. Someone who knows about great Bhima may be knowing when Bhima was still a baby he fell on a huge mountain called ‘shata-shrunga’ and this huge mountain broke into thousands of very small pieces. This was the greatness of Bhima.

6. During the Kurukshetra yuddha / war, when Bhima used to roar, all the animals over there used to be so frightened that many of the animals used to die just hearing the roar of the GREAT BHIMA.

7. During the ‘lakshagriha’ / wax palace time, the minister who tried to set fire the palace was never able to set fire the palace as Bhima was not at all sleeping (Earlier the plan was to set fire the whole palace when all the pancha Pandavas were asleep. But this never happened as Bhima never slept and thus the minister went ahead and set afire when Bhima was still awoke) – as said above don’t go with the television show series story, rather try to get the information from the correct Guru about our GREAT SANATANA DHARMA.

9. Many of us know that Yudhisthira accepted the exile in the forest after the game of dice. But Bhima never ever accepted this and was always waiting for the start of the war.

10. Also we know that Arjuna was reluctant in fighting the war against the Kavravas, but Bhima was always ready to fight against the evil Kavravas as per the wishes of Sri Krishna.

11. In the Kurukshetra war, Bhima killed most of the Duryodhana’s (Kaliyuga’s Kali) followers as per the wishes of Sri Krishna.

13. Bhima was the first to marry among the mighty Pandavas. Even though Yudhisthira was the eldest in the age, but since Sri Veda Vyasa Deva (he is also avatar of Sri Hari) ordered Bhima to get marry, Bhima without any reluctancy married Hidimbi.

14. In Mahabharata, Karna was defeated by Bhima on several occasions (this has been not at all discussed on any media until today including television series).

17. While Bhima was killing Dushasana, Bhima chanted the “Manyu sukta” of Bhagavan Sri Lakshmi Narasimha svamy which is very dearer to Sri Krishna.

19. Bhima is the only person who raises the voice during the game of dice in the initial part of the game itself.

20. The shankha / couch of Bhima was called as Poundra Khadga.

Bhima was the svayam avatar of the Devata / Demigod Sri Vaayu Deva. We all know without Vaayu / air nobody can live on this earth.

Also we should note that Bhima and Hanuman are one and the same as both are the avatars of Sri Vayu Deva.

Sri Vaayu Deva in his both the avatars never ever went against the words of Sri Rama / Sri Krishna / Sri Hari. 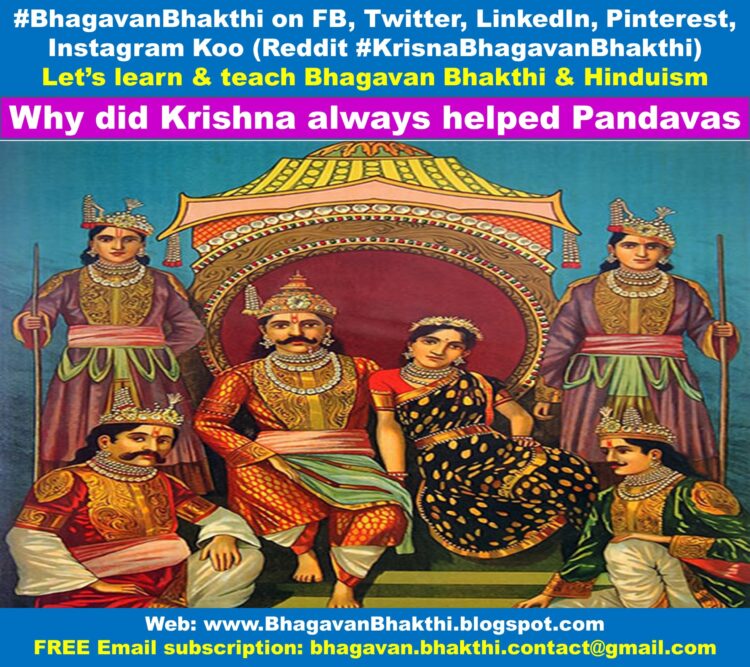 There are multiple meanings of the word Arjuna, in that few meanings are silver, a tree name, very bright, superbly shiny, highly alert, etc.

Let us know more about the Great Arjuna:

3. Arjuna was the most favourite student of Guru Dronacharya after Bhima.

5. Bhishma and Karna were never able to defeat the Great Arjuna in any wars.

7. He was one of the best friend of Sri Krishna after Bhima.

8. Arjuna easily destroyed many animals, beasts, in Khandava forest and also Arjuna with the help of Agnideva and Sri Krishna burnt the whole of the Khandava aranya / forest.

9. Another name of Arjuna was Krishna, as Arjuna had the dark complexion like Sri Krishna.

11. Arjuna had great warrior sons like Abhimanyu (from Subhadra), Babruvahana (from Chitrangada) and others.

12. Arjuna single handedly defeated many many kings for the Ashvamedha yagna which was performed by his eldest brother Yudhishthira.

14. Arjuna had learnt to shoot the arrow in the dark also.

15. Arjuna had a name called Gudakesha, which means someone who could conquer the senses easily.

16. Arjuna had ones saved Duryodhana against Gandharvas and had defeated Gandharvas’ leader Chitrasena.

17. Arjuna had great respects for his elder brother Bhima more than the eldest brother Yudhisthira.

18. Arjuna was the best archer of his time after Bhima (many know that Bhima used to fight with only Gadha, but don’t know that Bhima was a much better archer than Arjuna).

19. The shankha / couch of Arjuna was called as Devadatta.

Arjuna was the svayam avatar of Sri Indra Deva. Arjuna / Indra Deva in his earlier life had taken avatar as Vaali (during Tretayuga period, that is during Sri Rama’s period). 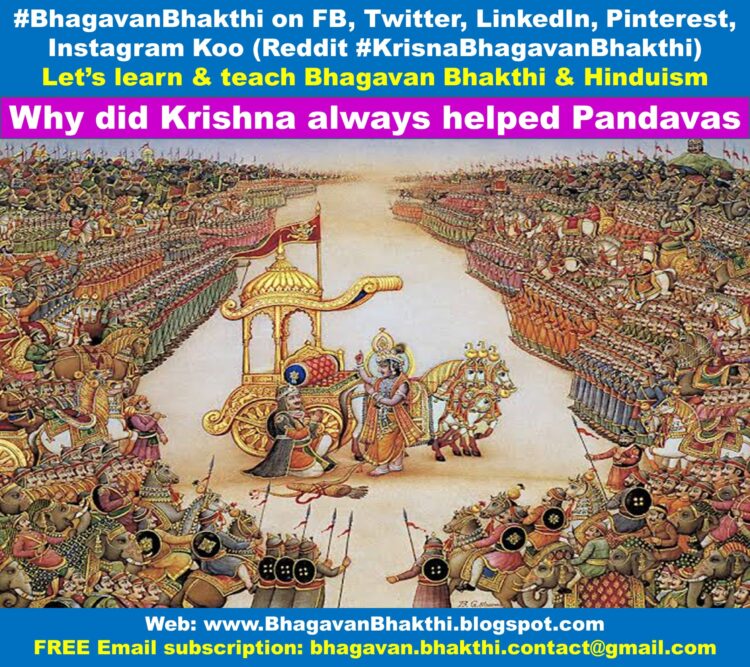 D. Nakula: Meaning of Nakula is

The special characteristics of Nakula are:

1. He was one of the best horse riders of his time and his speciality was that even in rain, he used to raid the horse without any hardships.

2. Nakula was one of the most attractive and handsome man along with his brother Sahadeva.

4. Nakula was very loyal to his brothers, wife and his parents.

6. Like his brother Sahadeva, Nakula was one of the best astrologer of his time. But Nakula was forgetting his predictions immediately after he used to tell the predictions of others.

11. Nakula is also called as Ashvineya, as he was the son of Ashvini Kumaras.

Nakula was the twin brother of the Ashvini Kumaras along with his younger brother Sahadeva. 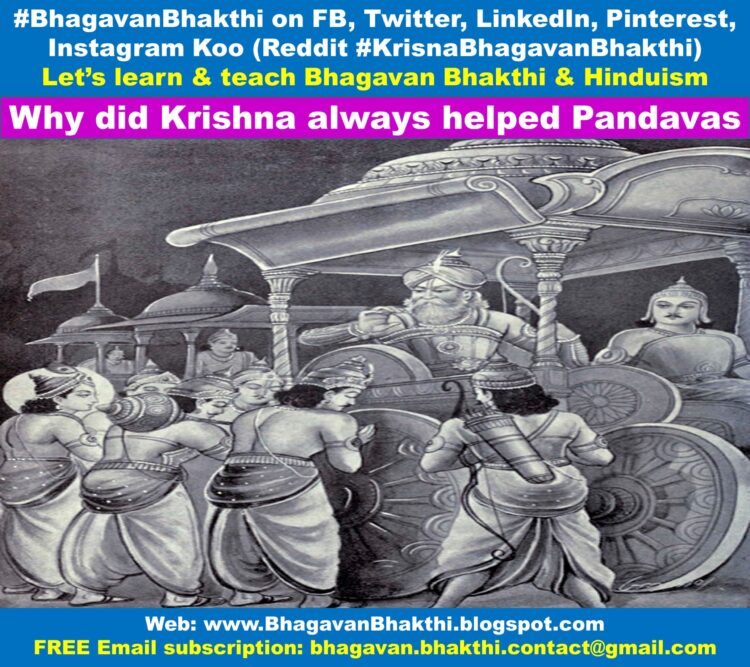 E. Sahadeva: Meaning of Sahadeva is

Sahadeva means, someone who is always supportive, especially to his elder brothers starting from Yudhisthira, Bhima, Arjuna and Nakula.

The main characteristics of Sahadeva are:

1. Just like his brother Nakula, Sahadeva had also mastered in several things including animals’ languages and communication.

2. Not only animals, both the twin brothers were able to understand the languages and communications of all the plants too.

3. Along with his brother Nakula, Sahadeva was also a learnt physician, as they were the avatars of the twin brothers Ashvini Kumaras (Ashvini Kumaras are the physicians of the Devata / Demigods).

4. During the aranya vaasa / incognito period, both the brothers Nakula and Sahadeva along with their other brothers had been in the kingdom of Matsya Raaja. In this period all the cows were giving more milk and also the animals like horses were much more healthier than their previous times and also more than any other part of the world.

6. Sahadeva was the master of axe fighting.

7. Sahadeva had took the vow of killing Shakuni and he killed Shakuni in the battle of the Kurukshetra.

9. Sahadeva was also a master in astrology just like his twin brother Nakula.

As his brother Nakula, Sahadeva is also called as Ashvineya, as Sahadeva was also a son and an avatar of Ashvini Kumaras. 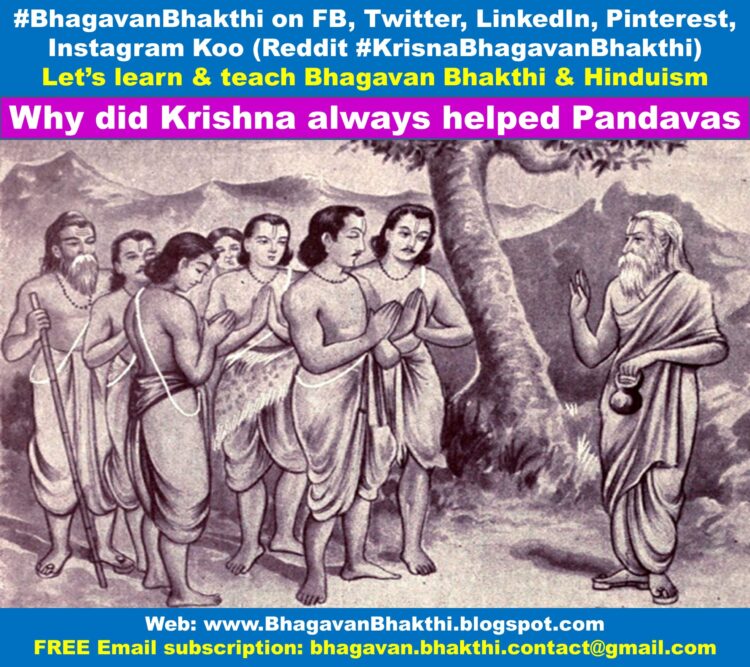 I have written a separate post on this. You can visit this link to know the GREATNESS of Sri Draupadi Devi:

As the Pandavas were always on GREAT SANATANA DHARMA path, Sri Krishna never ever left the Pandavas hands in the time of their difficulties.

Instead Sri Krishna taught them the lessons to be learnt from their difficulties and to utilise their time in correct way which was going to be useful for the Pandavas in their future.

Now we need to think, why the GREAT PANDAVAS were so favourite to Sri Krishna? And also why they all were so GREAT?

These are only few reasons (there are unlimited reasons) why Sri Krishna always helped Pandavas.