Different ways of getting children in Vedic Hinduism

Just before moving to “What are the different ways of getting children in Vedic Hinduism”, let us have small brief about Hinduism.

Hinduism is the oldest Dharma which is existing on this earth. Hinduism is one of the largest Dharma (Divine religion), with over 1.2 billion followers all over the world.

Hinduism is a diverse system of thought marked by a single philosophy, but in modern era because of many reasons people have buildup their own theories and have been practicing their own concepts.

India is the divine place where unlimited pilgrimage places are existing. In our Vedas, very clearly it is written that there is only one ‘Parabrahma’ and others are his followers. 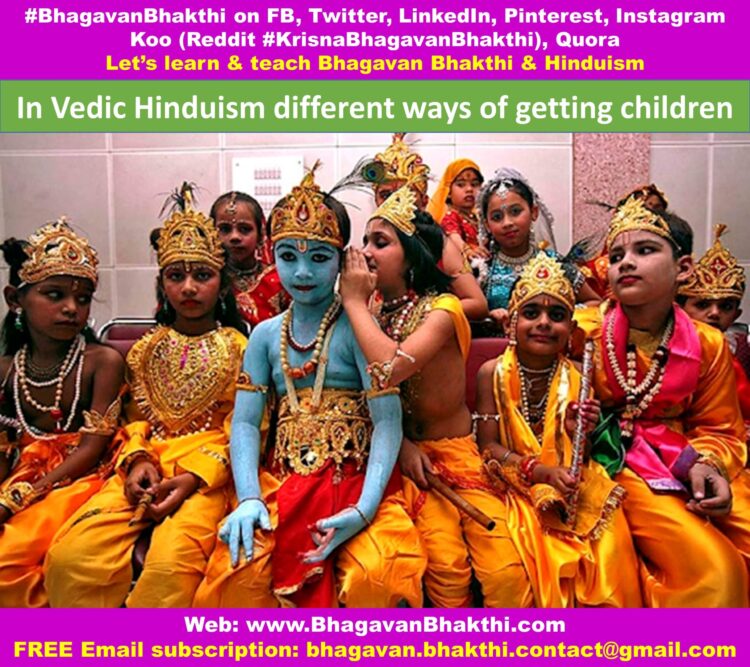 Only in Hinduism we have the concept of moksha / mukti (Divine liberation). We get fruits as per our Karmas.

Hinduism has a cyclic way of birth and death. After every living or non-living being dies, we have to pass a multiple test either in upper planets or in lower planets.

Thus, again as per Karmas, we get either upper planets or lower planets.

In Hinduism there is nothing like Qayamat or Tribulation time. We believe in cyclic way of life. This means, after every Kalpa, a new Sri Brahma Deva is born from the ‘nabhi’ (Divine navel) of Bhagavan Sri Vishnu. Thus the new Sri Brahma Deva born will create a new Brahmanda (Universe).

This is going on and will go on until the ‘ananta kalam’ (Grand infinite period).

We were so much forward in Shaastra (today’s Science) and Tantragnana (Technology) since ages. Today’s so called modernity is just a simple sample of our Great Sanatana Dharma.

In Vedic days there were many ways to get a child:

1) Kumbha (Drona) Shishu / Test tube babies – (“Pleased by the sacrifice and the praises, Mitra deva (Lord Sun) and Lord Varuna Deva effused into the Vasativara vessel the “Fluid of Birth” from which arose Agasthya and Vashishtha”.) 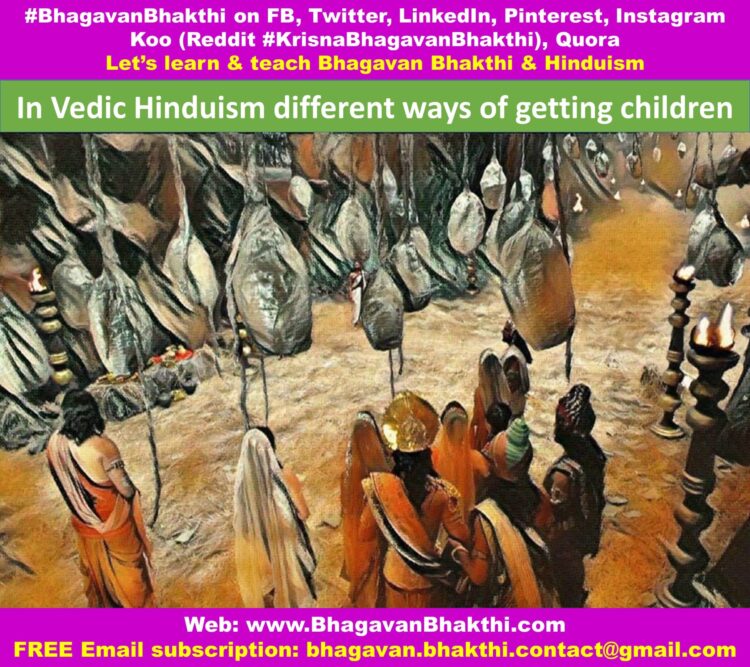 (The 100 Kauravas at the time of Mahabharata 5100 years back were all test tube babies, Virja / sperm… was preserved in 101 pots which gave birth to Durdhoyana & his 99 brothers and one sister.)

2) Sambhoga sambandha / Intimate relation in general – It’s the general and most common to get a child.

*These 3 ways of birth are common even today. 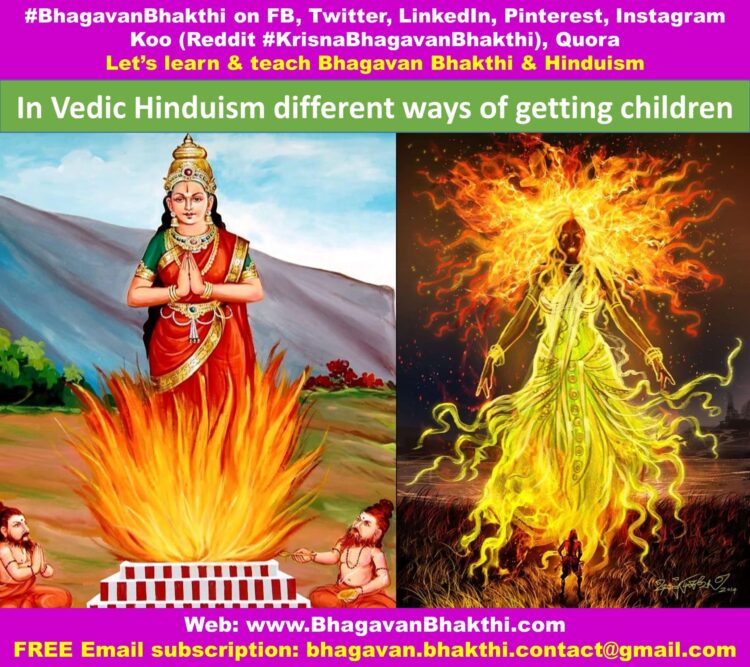 5) Aashirvaadam / Boons – Pandavas, Karna appeared by a boon given to maata Kunti Devi. 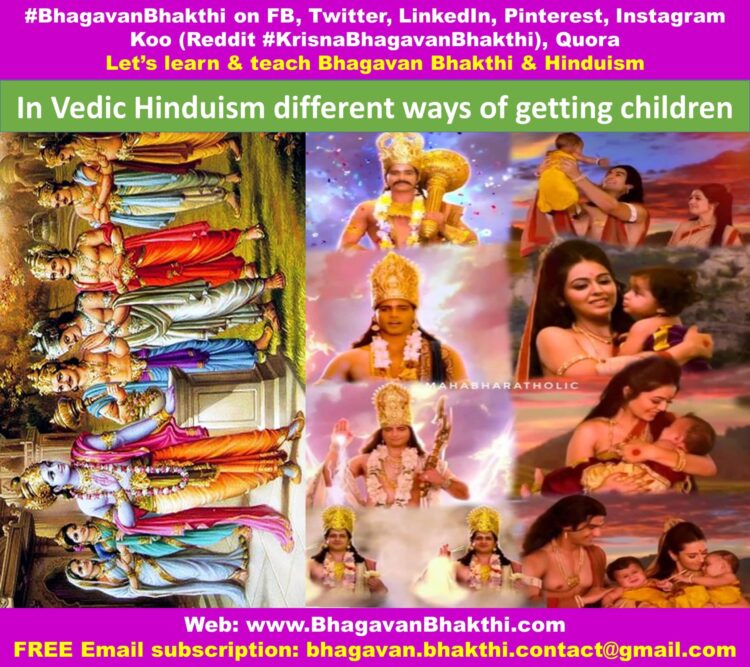 6) Fluid preserved or transferred by different modes / ways. Such incident happened with Lord Brahma whose Virja was transferred by Agni Deva who gave birth to 80 Sages. Many such incidents are mentioned in Vedic Scriptures.

7) Manthana / Churning – King Prithu (who got all types of food on planet – from King Prithu our planet was named as Prithvi), he came from Kings Vena’s Thigh.

There are many who are called as ‘Brahma maanas putra’, whom all were born from the ‘maanas’ of Lord Sri Brahma  Deva. 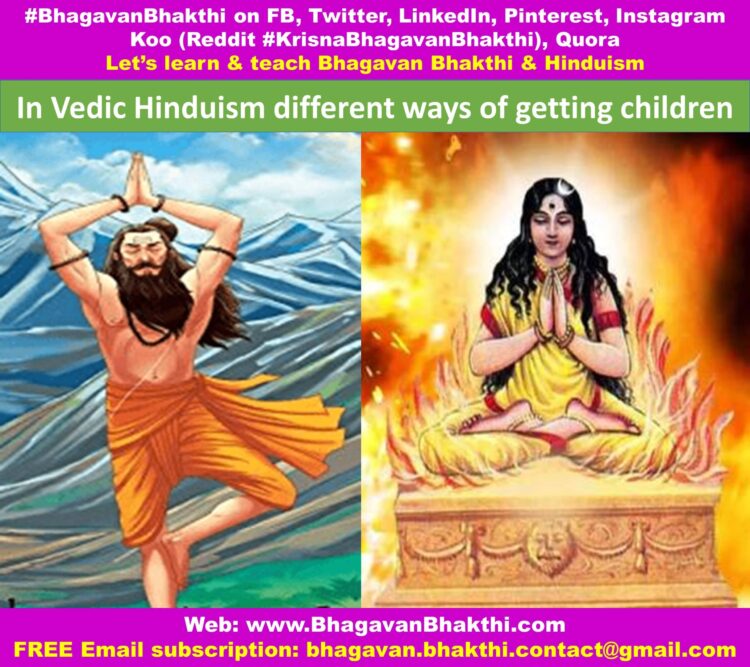 9) Sankarshana (Surrogacy) -Transferring from one womb to another, like Sri Balarama was transferred from maata Devaki’s womb to maata Rohini’s womb. 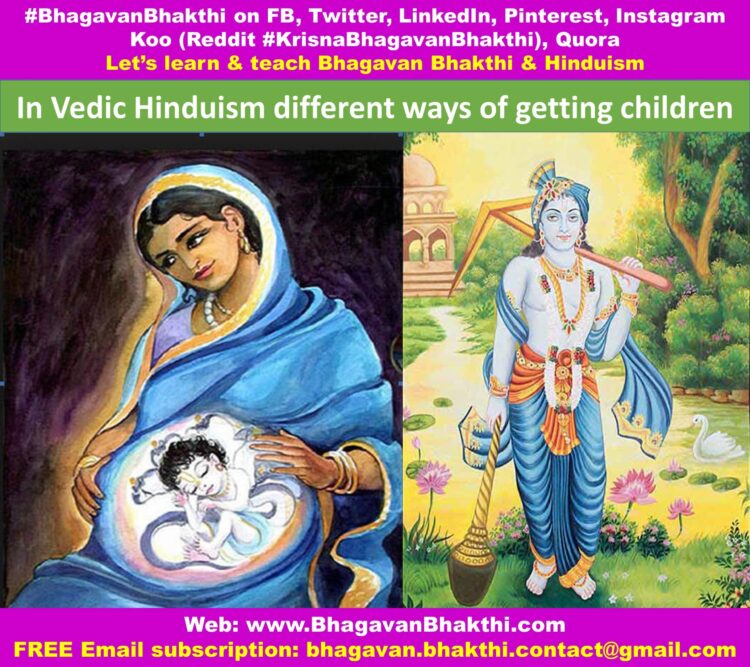 If you know any other ways, please let me know.