What are Mahabharata unknown secrets

The Great Mahabharata is written by Sri Veda Vyasa Ji (He is an avatar of Bhagavan Sri Vishnu).

Only a person who has the blessings of Bhagavan Sri Vishnu / Krishna can understand more easily. Let us now start. 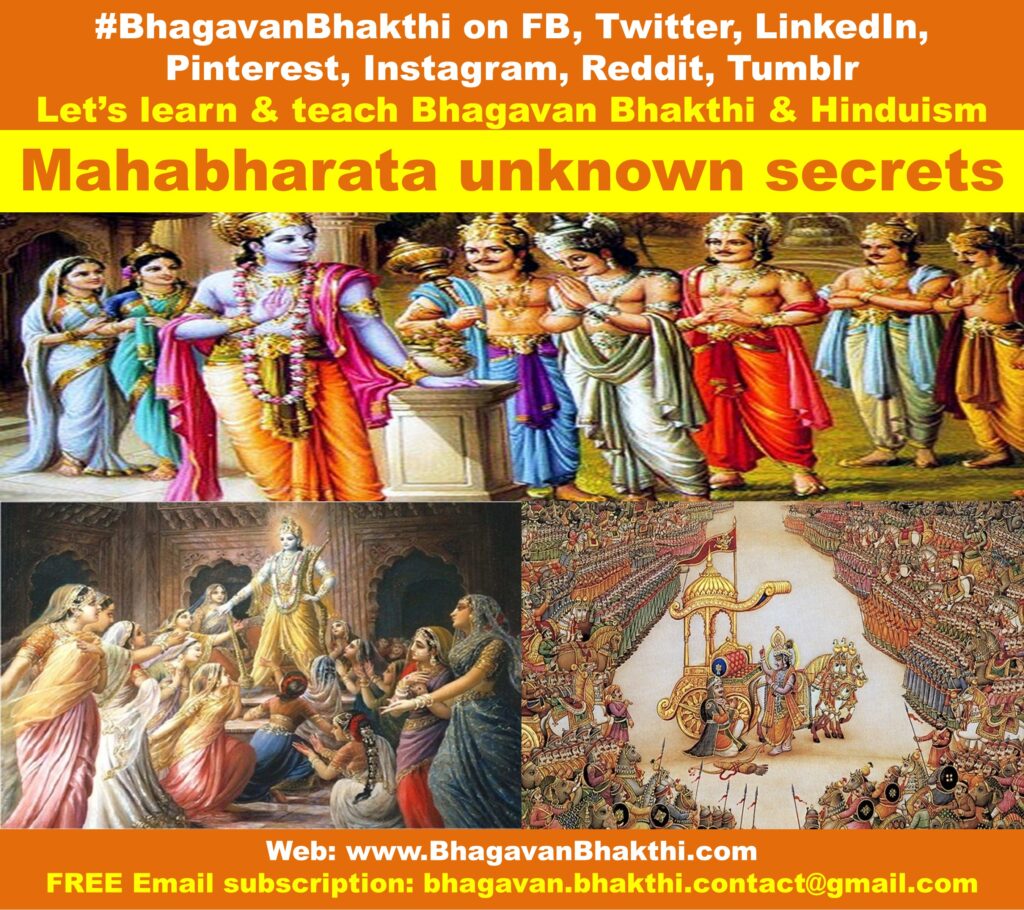 There are unlimited number of deep secrets about the Great Granta “Mahabharata”.

Let us know few of them:

Because of the Maya, both Sri Vasudeva and Sri Devaki Devi would forget this. We should always remember that, Sri Hari / Sri Rama / Sri Krishna never takes birth and never has the end.

As per our Great Grantas, only fools think that Sri Hari takes birth as the ordinary humans. But this is completely false. 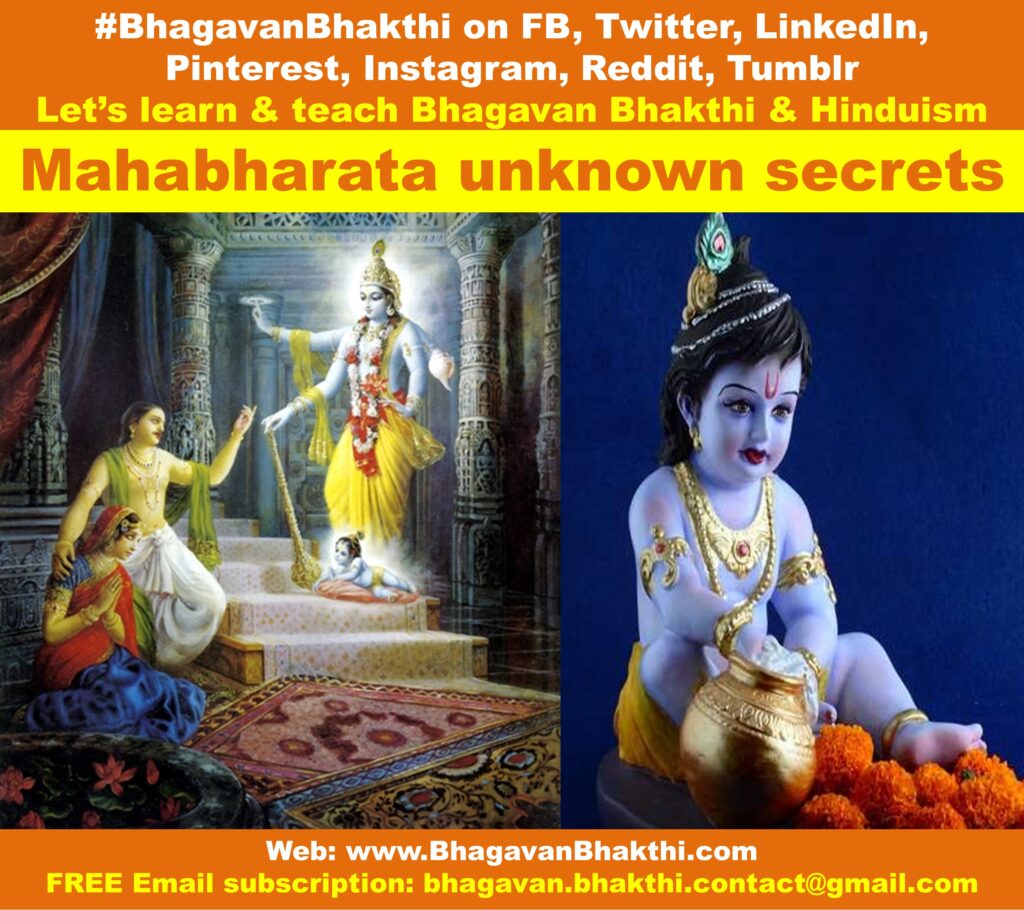 Sri Hari never takes birth from anybody’s womb. He is called “sarva svatantra”, means he is not at all dependent on anybody or anything. He is completely independent.

2. Draupadi Devi: Draupadi Devi is not a single woman, but rather she is the amalgamation of five Great Devis. That is, 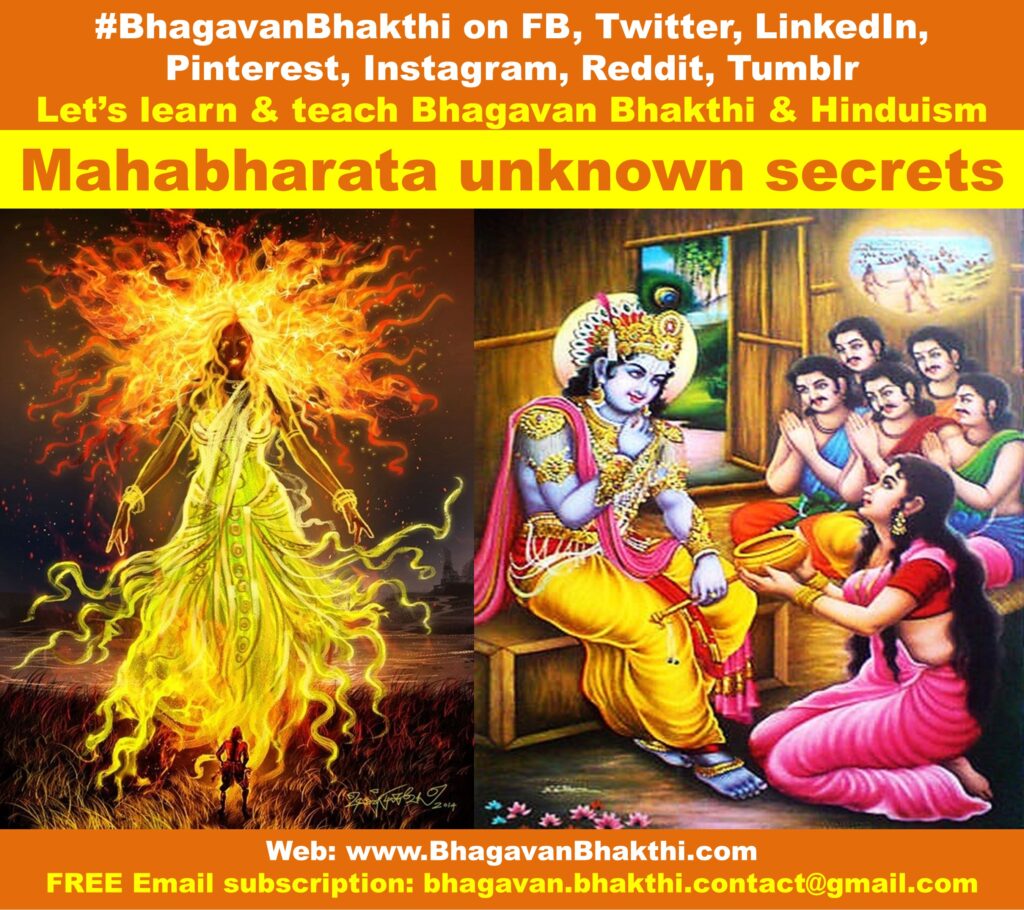 a. Bharati Devi: Originally she is the consort of the Sri Mukhya Praana Deva / Sri Vaayu Deva (Sri Bhima).

b. Parvati Devi: Originally she is the consort of the Sri Rudra Deva / Sri Shiva.

c. Sachi Devi: Originally she is the consort of the Sri Indra Deva (Sri Arjuna).

d. Shyamala Devi: Originally she is the consort of the Sri Yama Deva (Sri Yudhisthira).

e. Usha Devi: Originally she is the consort of the Sri Ashivini Kumaras (Sri Nakula Deva and Sri Saha Deva).

To know more information about this Great Devi Sri Draupadi Devi, you can visit my other post link as given below:

3. Vidura: He is an avatara of Sri Yama Deva along with Sri Yudhishira. Always remember, during the Great Mahabharata period all the Devatagan / Demigods also take birth. They are not ordinary people like us. 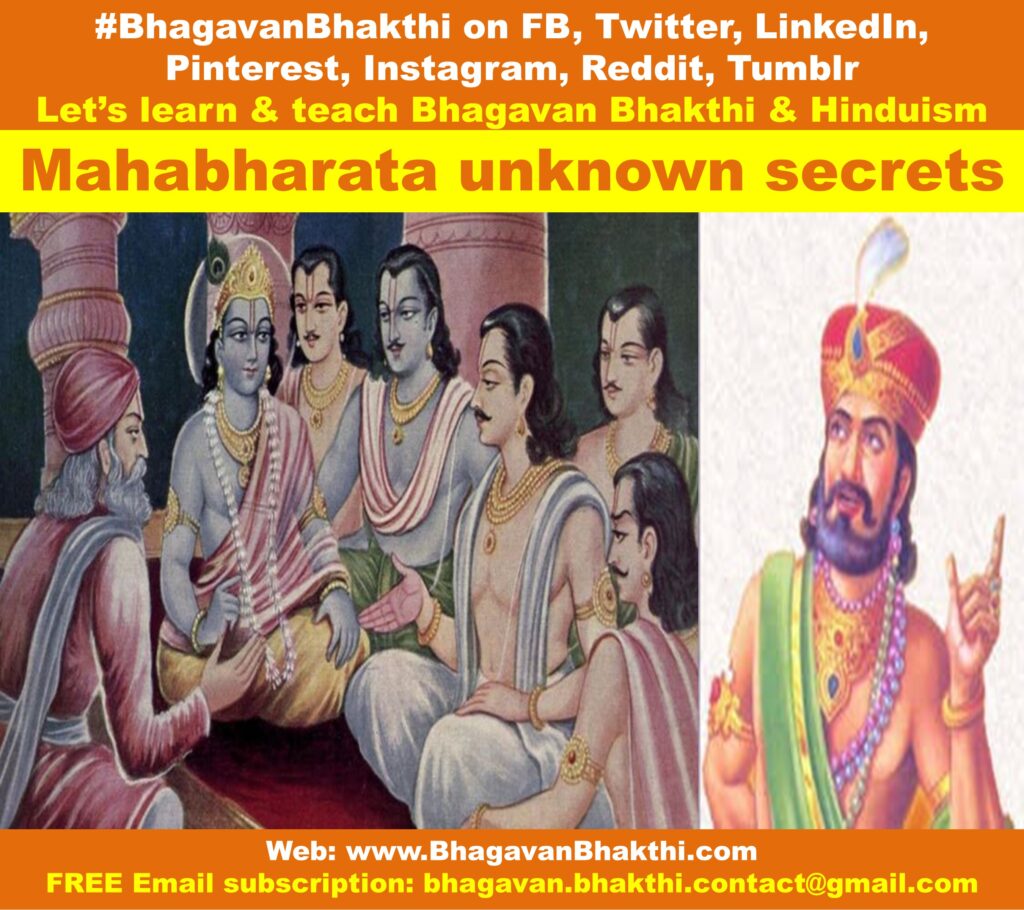 All the Devatagan can take more then one avatara at a given single time.

4. Ashvattama: He is an avatara of Sri Rudra Deva / Sri Shiva. Also, Sri Rudra had taken the avatara as Sri Durvasa Muni. 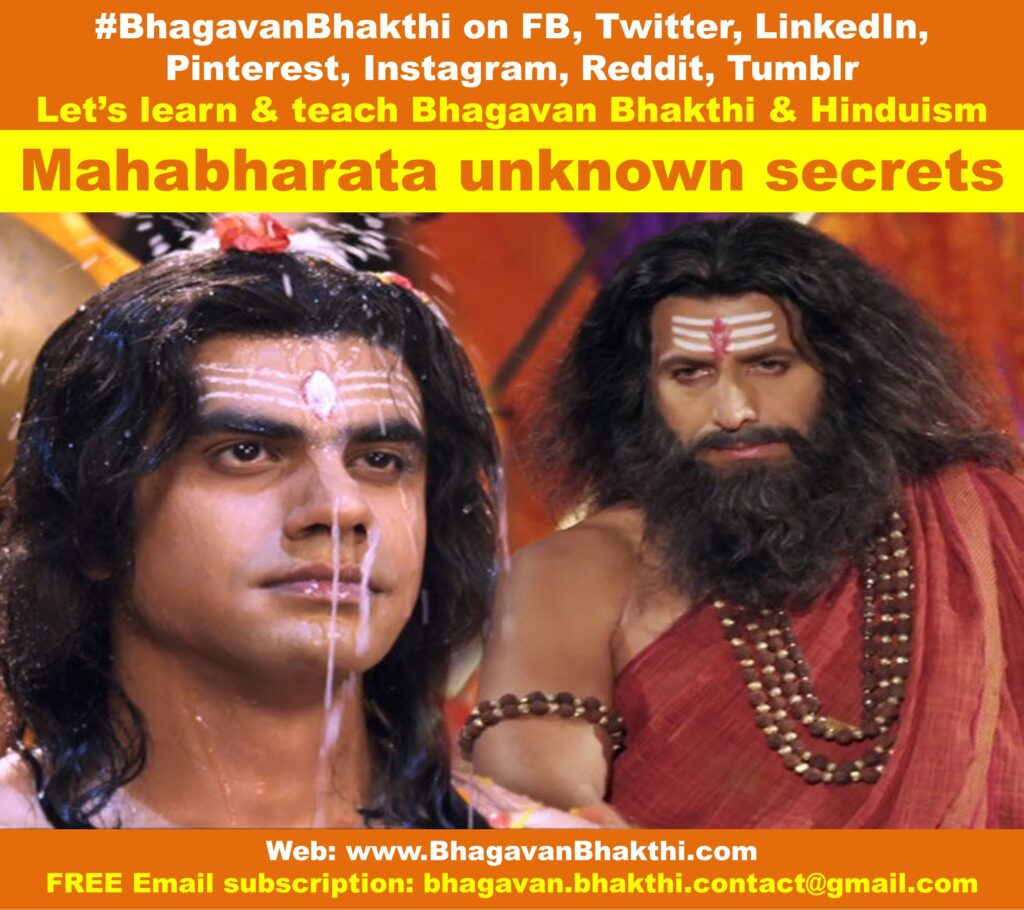 Again Sri Rudra Deva was also present on this earth in two forms, that is, firstly it was Sri Durvas Muni and also as Sri Ashvattama. 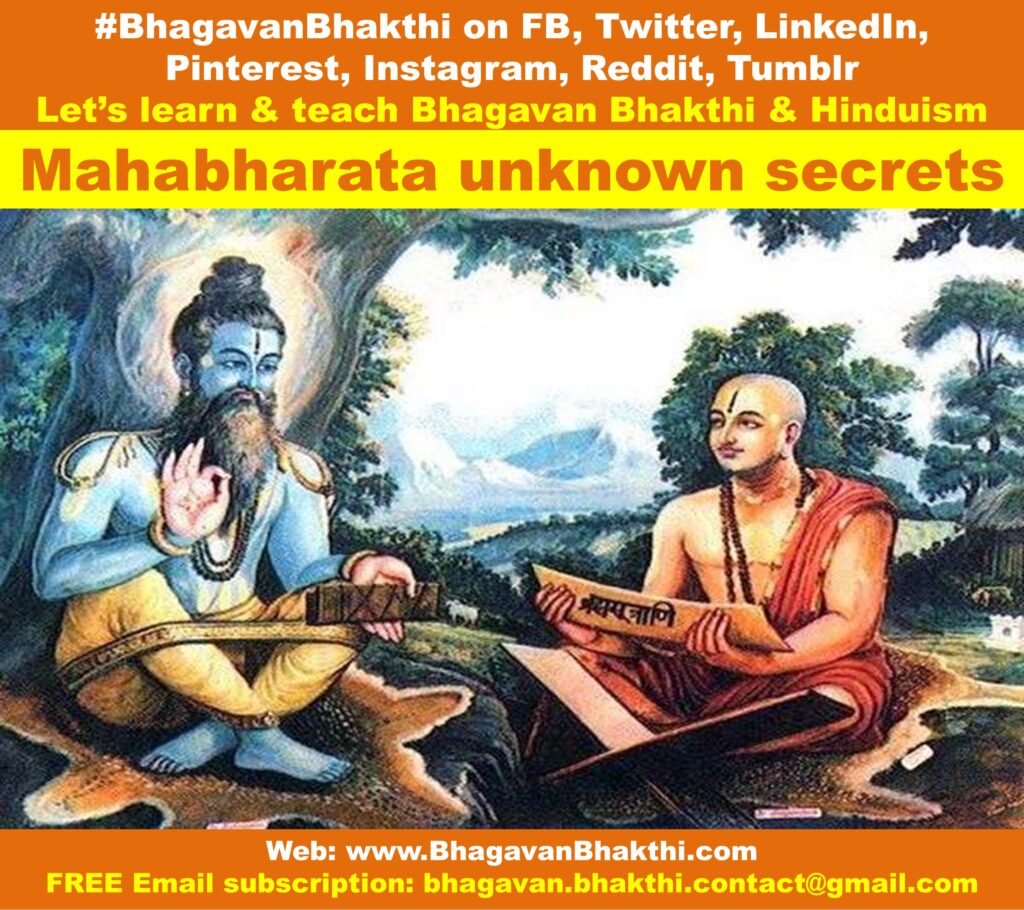 Veda Vyasa means, he is the one who separates the Vedas and other grantas, so that it will be easy for ordinary people to understand.

6. Sri Bhima: He is an avatara of Sri Vaayu Deva (or also called as Sri Mukhya Praana Deva). We should remember that Sri Bhima Deva and Sri Hanuman are one and the same. 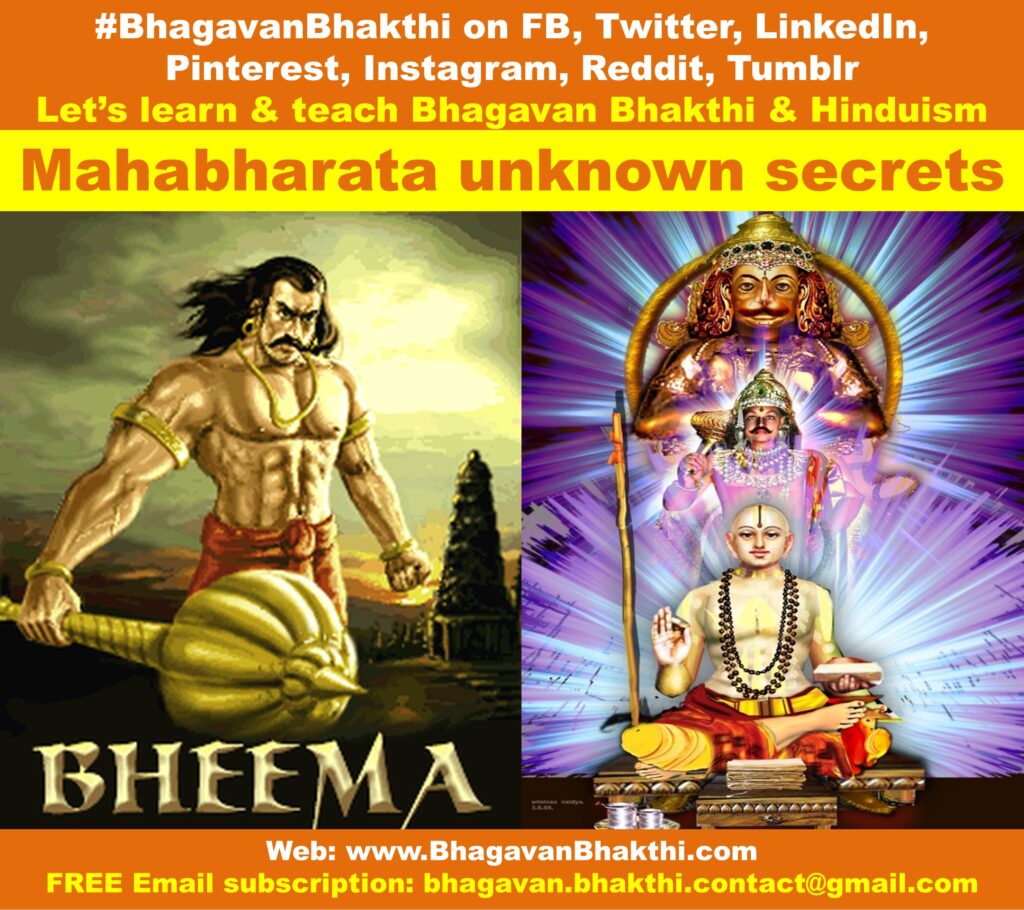 Sri Vaayu Deva took an avatara of Sri Hanuman in the Treta Yuga to do seva (serve) of Sri Rama Chandira Prabhu.

Sri Vaayu Deva took an avatara of Sri Bhima in the Dvapara Yuga to do seva (serve) of Sri Krishna Paramatma. 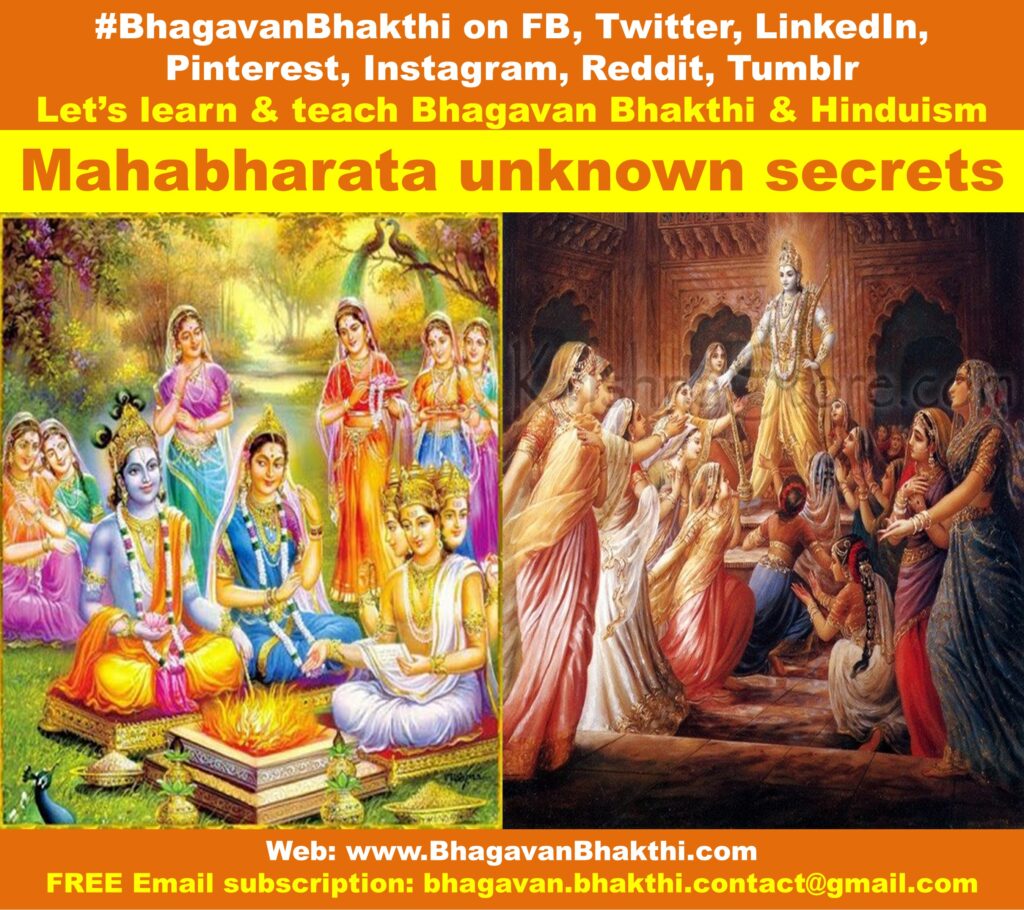 We should remember that all these Devis had done lots and lots of tapasya in their past lives, so that they can marry Sri Hari. Sri Hari had given promise to all these Devis, that in the Dvapara Yuga, he would take the avatara of Sri Krishna and will fulfill the wishes of all Devis.

Please remember that these 16,100 + 8 wives were different and the Gopikas of the Vrindavan are different. People often get confused with these two group of Devis.

To know more information about the wives of Sri Krishna and their children, you can visit my other post link as given below:

What are the names of Lord Krishna wives and children

8. Dronacharya: He was an avatara of the Great Deva Guru Bhrihaspati (he is the Guru of the Devatagan / Demigods of the Svargaloka). His father was called as Sri Bharadvaja. 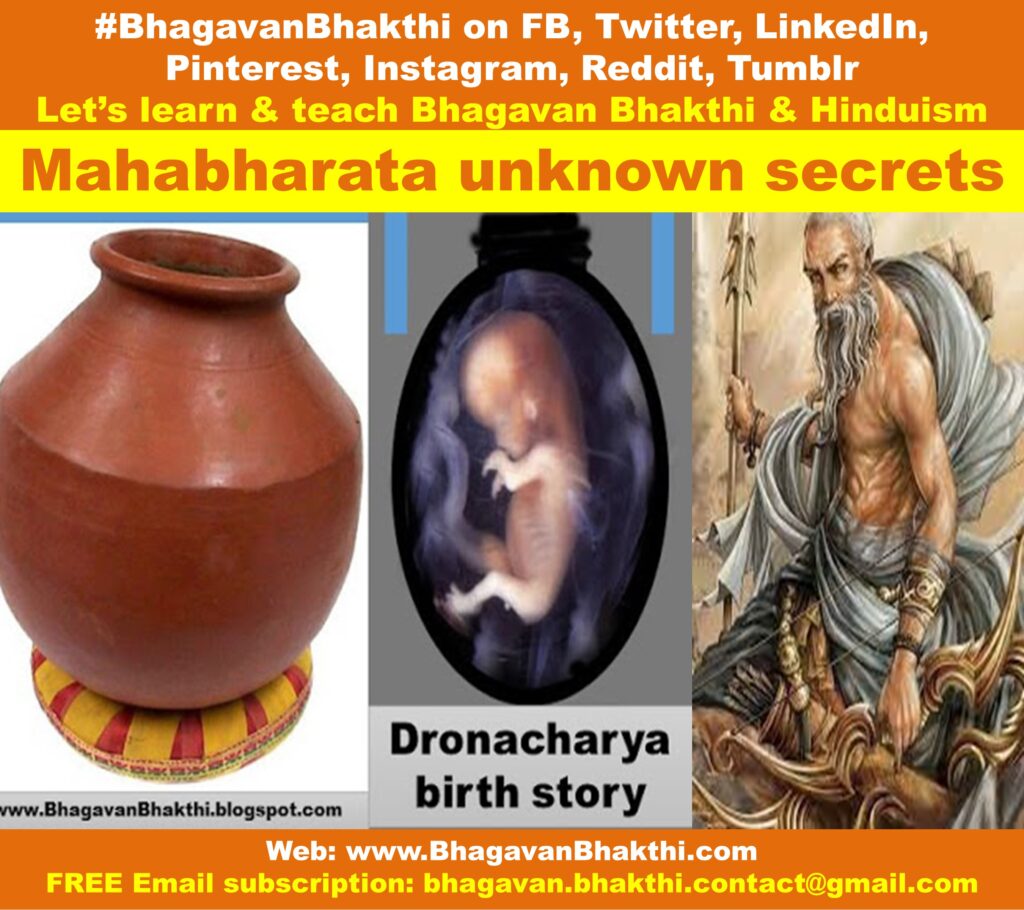 Very fascinating thing here to be noted is that, Sri Bharadvaja’s father was Sri Bhrihaspati. Again Sri Bhrihaspati gets born as the son of his own son.

Dronacharya gets born as the son of Sri Bharadvaja from a ‘drona’, means a kind of bowl (in Samskruta / Sanskrit ‘drona’ means a bowl). Thus his name came into existence as “Drona” and since he was an “Acharya” / Guru, he is known as “Dronacharya”. 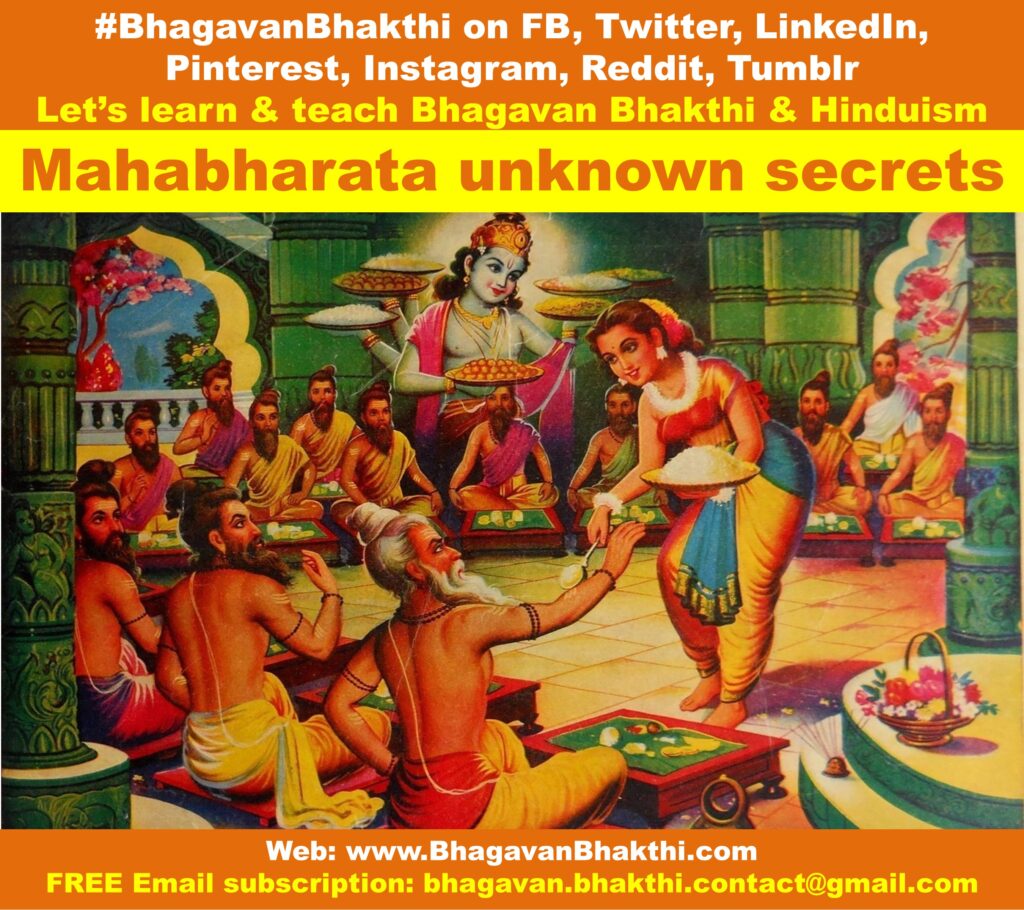 10. Duryodhana an avatara of Kali of Kali Yuga: Duryodhana is an avatara Kali (of Kali Yuga). He is the same who is ruling the present day Kali Yuga. He is considered as one of the worst personalities ever born. 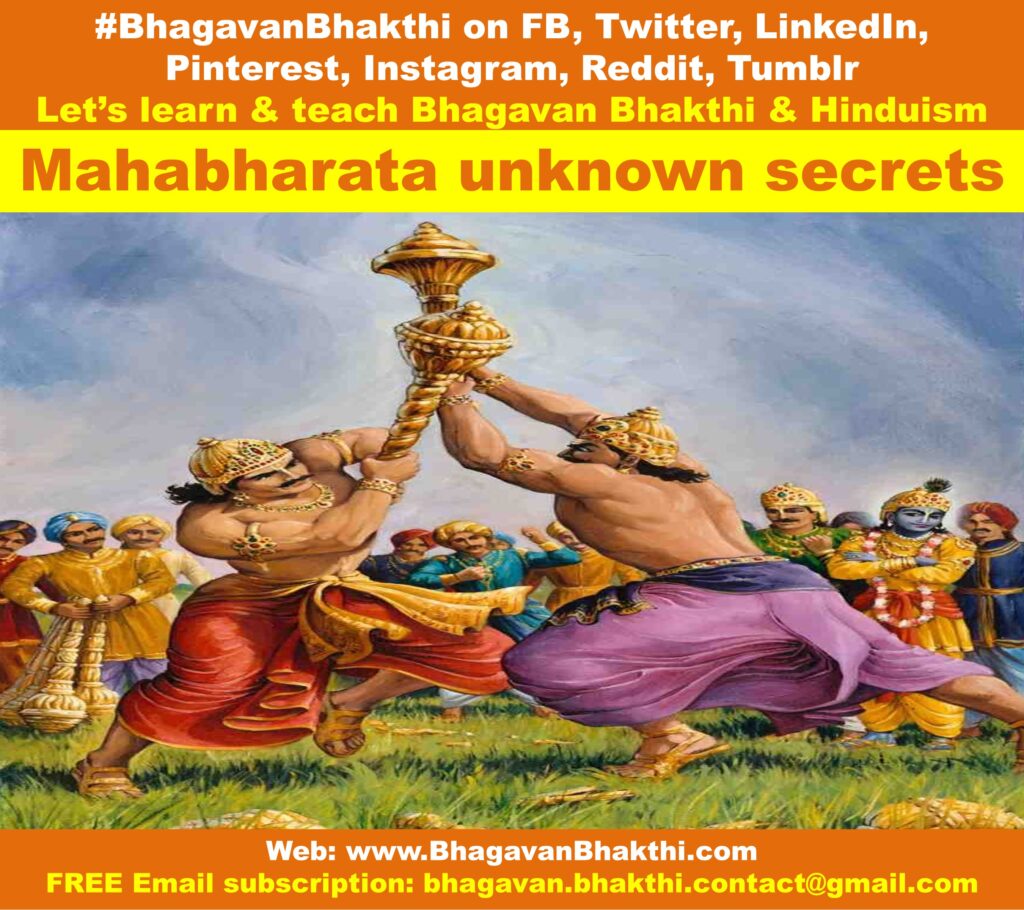 Nobody was giving him respect. He was called as “neecha / neech” (evil, wicked, villainous, ill conditioned, highbinder, vile etc) in the Great Mahabharata Granta.

In this Kali Yuga wherever there is unwanted amount of money means, Kali / Duryodhana is present.

Also do remember that Kali Yuga’s Kali’s wife is known as “alakshmi”. She is exactly the opposite of Sri Mahalakshmi Devi.

If you have unwanted money (money earned in the easy ways including thefts, bribe, corruption or in any bad ways) means alakshmi is present. This money will give you dissatisfaction, no or too less sleep, ill health, dearth, dishonour, all bad things etc.

You choose, who you want.

11. Sri Bhima’s power: Sri Bhima was so powerful, that after the ‘laaksha gruha’ incident, he alone carries Sri Kunti Devi, Sri Yudhisthira, Sri Arjuna, Sri Nakula and Sri Sahadeva. Such was the real power of the Great Sri Bhima Sena. 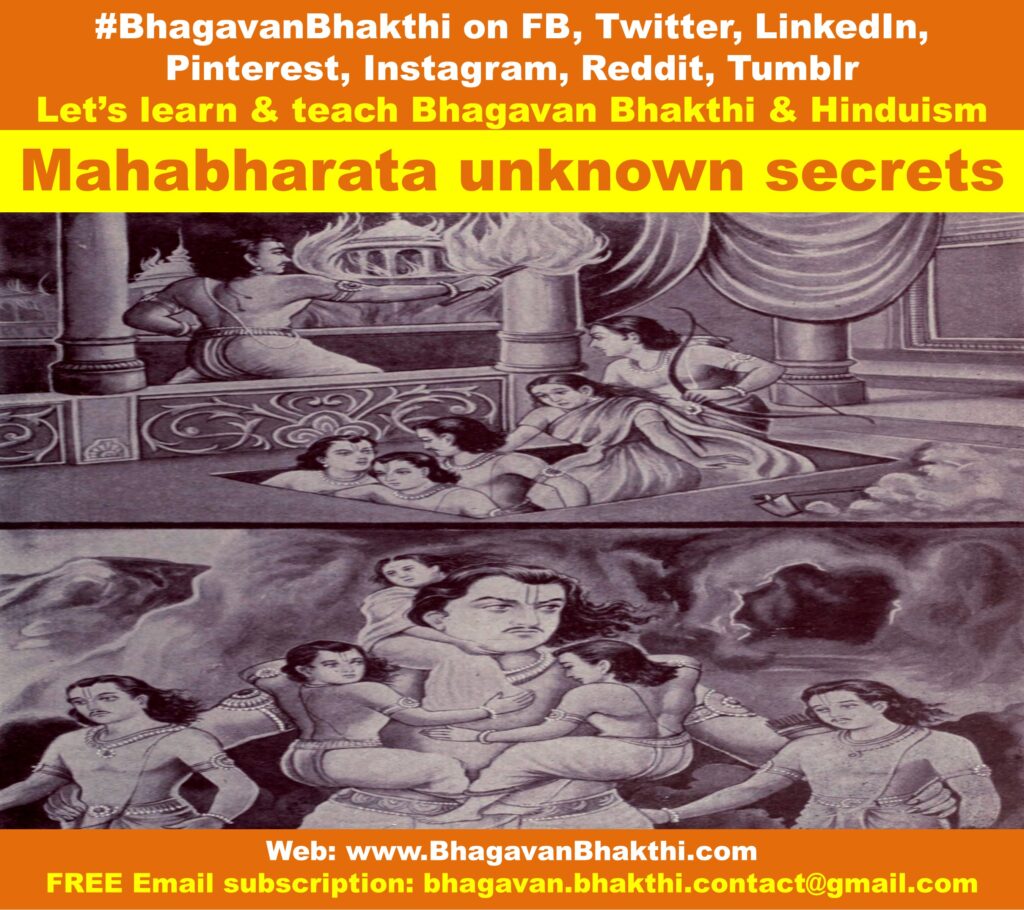 But again, don’t limit his power to this much only.

We must know that, he is the next Sri Brahma Deva. Remember he is same as Sri Hanuman and also an avatara of Sri Vaayu Deva / Sri Mukhya Praana Deva.

12. Birth of Pandavas including Karna: Many many fools and stupid people think ill about the Sri Kunti Devi. 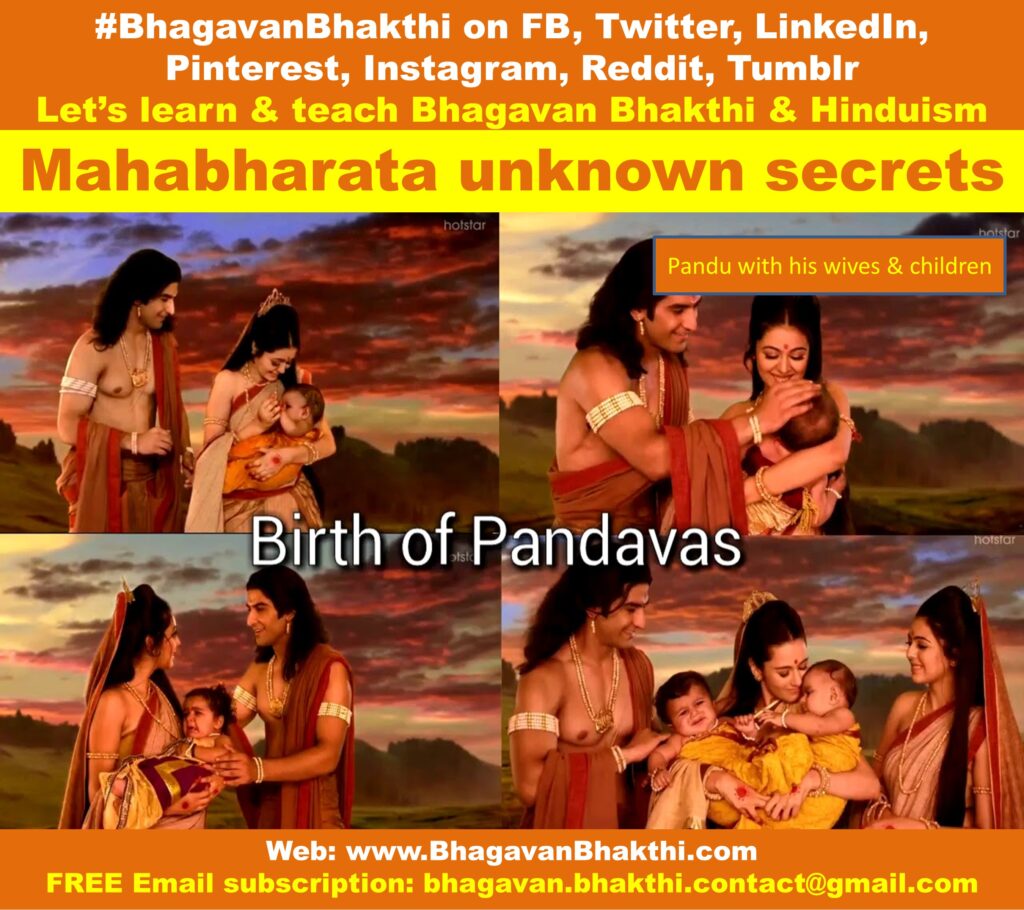 But that is completely incorrect. Sri Kunti Devi got all the six children (including Karna) by the aashirvada / blessings of the Devatagan (Demigods) without any “sambhoga” / copulation.

Always remember, Sri Kunti and her six children were not ordinary humans.

They don’t need to make sambhoga / copulation to get children. They are special and not ordinary humans.

Just thinking (off course with the aashivaada / blessings of Sri Hari), they can easily get anything including children.

That’s the different between ordinary humans and Devatagan / Demigods.

More information will be added to this. You can visit this post after some time.