What is Pandu, Kunti, Madri story | What is Kunti and Karna story

King Shura gave his daughter Pritha as adopted daughter to King Kuntibhoja. Therefore, she came to be known as Kunti.

She was the wife of Pandu in his original form of Pravaha Maruta and went by the same name, Kunti during the Great Mahabharata time.

Kuntibhoja was Kurma Maruta in his original form. Sage Durvasa came to his city and desired to observe chaturmaya in his place.

King Kuntibhoja offered all facilities and asked his daughter Kunti (at that time she thirteen years old), to serve him. She devotedly did so. 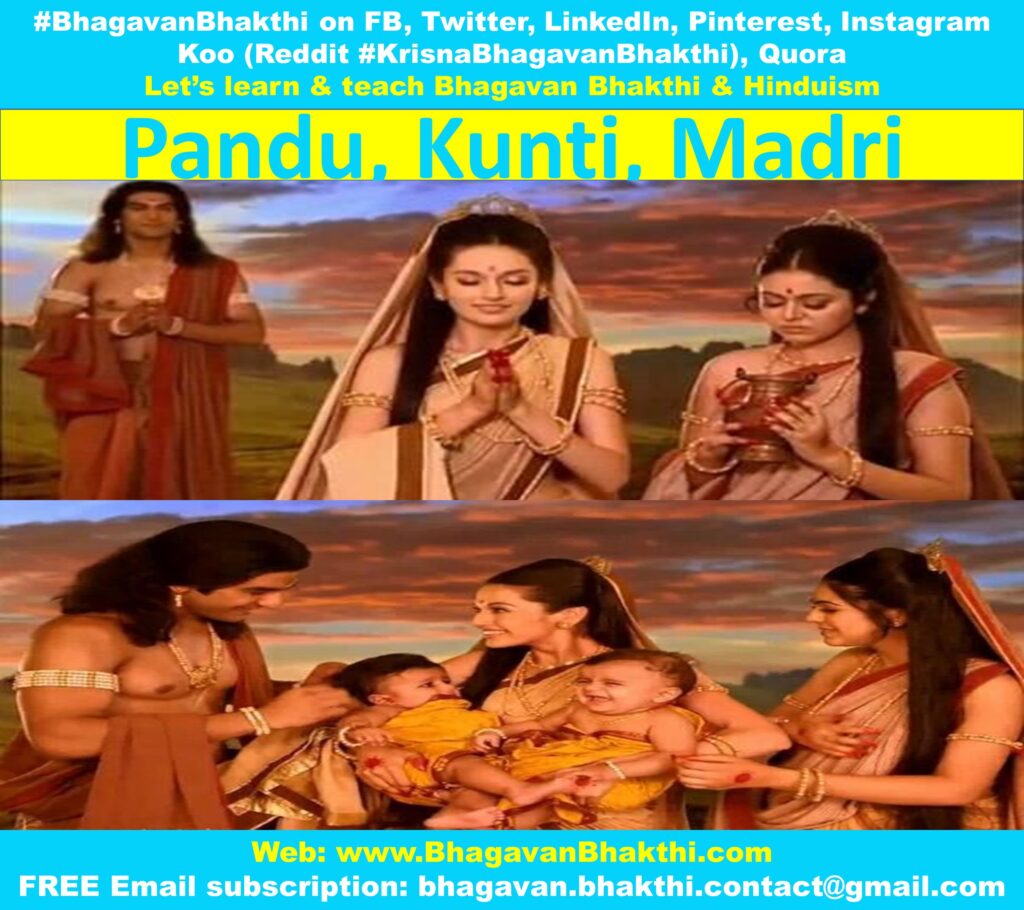 Durvasa was pleased by her service and taught her a mantra by which she could call the deities.

Out of curiosity (remember, at the very young age of 13 years, she did this), she called Surya Deva.

She was attracted by him and sported with him.

Consequently, she got a male child.

The child was Surya Deva himself in another form, but the demons Sahasravarma and Narakasura were also present in him as amsha.

Kunti, afraid of public ostracism, put the child in a box filled with valuable gems and floated it on the river Asvanadi.

It reached the river Ganga through Charmanvati and Yamuna. A suta, i.e. Adhiratha, lifted it and adopted the child as his son.

Adhiratha’s wife Radha also bestowed all her affection on him.

He studied the scriptures, weapons, etc.

He was named Karna and Vasushena.

Vidura married Aruni, the daughter of Shura through his shudra wife.

Ritayana, the king of Madra, begot a son (Shalya) and a daughter (Madri). 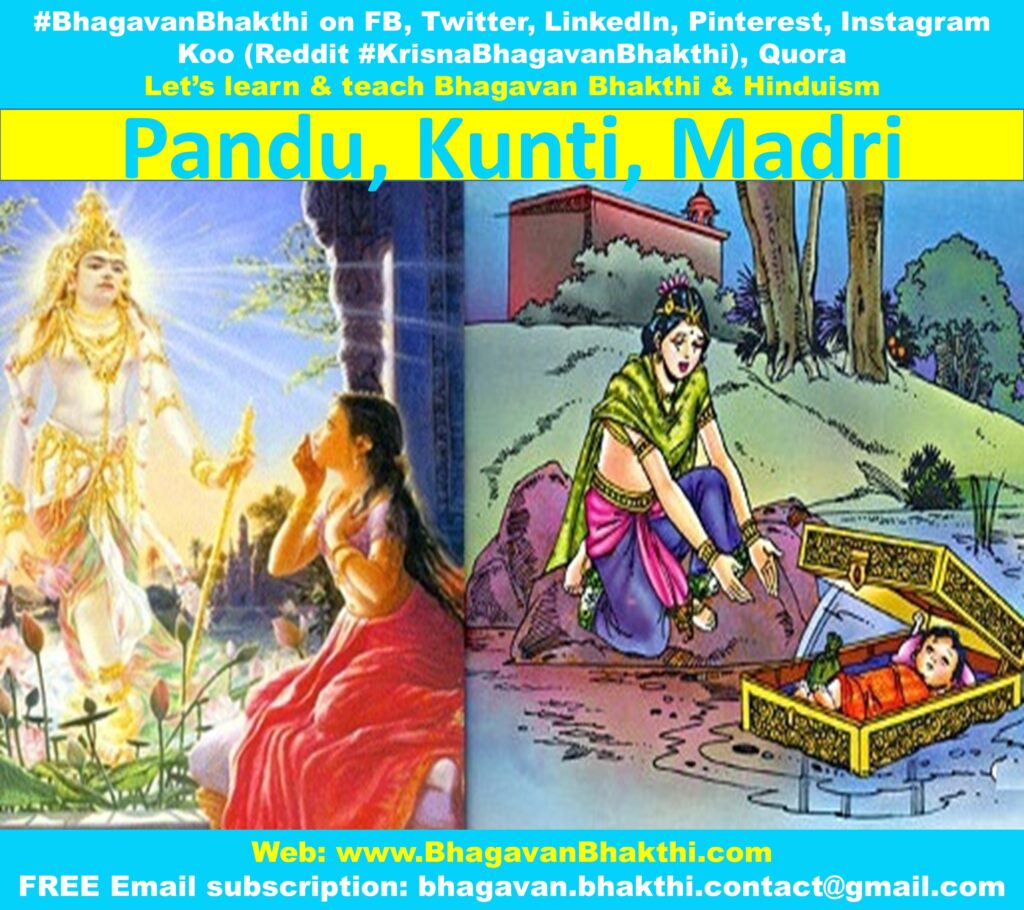 Shalya was Prahlada’s brother Sahalada in an earlier birth. Vayu was partially present in him an amsha.

Madri was Pandu’s wife in the earlier birth also.

Dhrtarashtra asked Pandu to rule over the kingdom. Pandu ruled guided by Bhishma.

Sri Vedavyasa took Satyavati, Ambika, and Ambalika to his ashrama.

In due course, Satyavati and Ambalika attained Vaikuntha while Ambika attained sarupya, a kind of liberation.

After some time, Pandu retired to the forest and lived in Badarikashrama.

Unfortunately, he killed an ascetic who was sporting with his wife assuming the form of a deer.

The ascetic cursed him that he should also die when he was sporting with his wife.

Pandu moved to Shatashringa mountain and lived in Pandukeshvara with Kunti and Madri.

At this juncture, the deities Indra and others, led by Chatur Mukha Brahma and accompanied by Bhudevi, approached Bhagavan Sri Maha Vishnu.

They described the fight between the deities and the demons that had taken place earlier, recalling the warding off of Sambara’s maya, the destruction of Viprachitti’s weapons, the killing of Kalanemi, and other great events of that battle.

They further told Him that these demons were then born again. 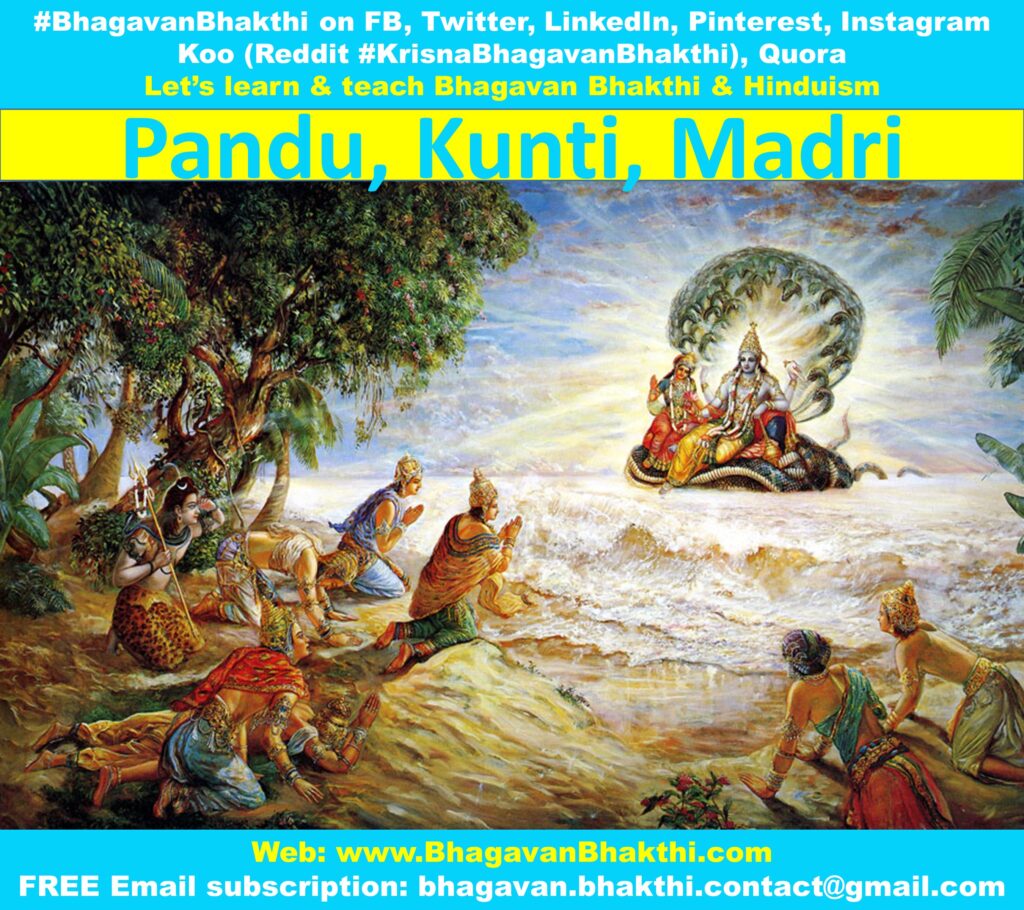 If these demons listen to discourses by sages and Brahmanas and obtain devotion to you it will affect the very setup described in Scriptures.

Therefore we appeal to you to take an incarnation and mislead the demons and destroy them.

They informed that Kamsa, Jarasandha, Hamsa and Dhibika were already born.

Kamsa was Kalanemi was again reborn.

The demon Bali was born as Salva.

The demon Bana was born as Kichaka.

All these had to be destroyed.

Hearing all of this, Sri Maha Vishnu assured Sri Brahma Deva and others that He will take the necessary incarnation.

He moved to Meru mountain with all the deities and made Sri Brahma Deva announce which deity should take which form to assist Him in the task of his incarnation.

Chaturmukha Brahma informed Bhagavan Sri Vishnu that he had cursed Kashyapa to be born as a Kshatriya, but undertake a Vaishya’s duty of rearing cows.

This was because Kashyapa had refused to return Varuna’s cows, which he had brought for his sacrifice.

He was then born as a son of King Sura and was named Vasudeva.

One of the Vasus, Drona (not Dronacharya), was born as Nanda Maharaja.

He was the son of King Sura through his Vaishya wife.

Both Vasudeva and Devaki and Nanda and Yashoda had performed penance to beget the Bhagavan Sri Vishnu as their son.

Therefore, He revealed Himself as Vasudeva’s son first and then moved to Nanda’s place.

Accordingly, the deities were born.

Kubera was born as Bhagadatta. The demon Baskala was partially present in him as am amsha.

Yuyudhana was born as a son of Satyaka and was known as Satyaki. Garuda, Samvaha Maruta, and Vishnu Chakra, i.e. Pradyumna, were partially present in him as amsha.

Kritavarma, the son of Hridika, had the presence of Panchajanya, i.e. Aniruddha, and Pravaha Maruta partially.

Similarly, the other deities and demons were also born.

Those who supported the Pandavas were the deities and their followers.

Those who opposed them were demons and men of unsteady mind.