Birth of Pandavas and 100 Kauravas story

Let us briefly understand the birth of Bhagavan Sri Krishna, five Pandavas, 100 Kauravas and others: 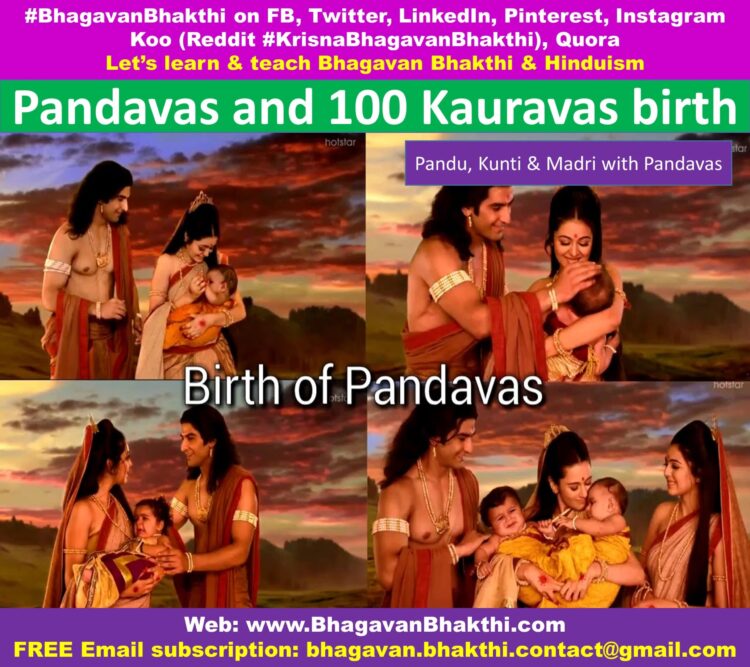 A Gandharva named Devaka was born born as the son of Ahuka and the brother of Ugrasena. He retained the same name, i.e. Devaka. His daughter was Devaki.

Earlier, Devaki was Aditi, one of the thirteen wives of Kashyapa. Ahuka adopted Devaki as his daughter. Thus she was both the sister and aunt of Kamsa.

When she was given in marriage to Vasudeva, Kamsa himself took the couple in his chariot to their residence.

At that time, Sri Vayu Deva told him through an ethereal voice that Devaki’s eighth son would kill him.

On hearing this, Kamsa extracted a promise from Vasudeva that he would surrender his children as soon as they were born.

He had already married Rohini, the daughter of Bahlika Maharaja.

Vasudeva married Diti, who was born as a daughter of the king of Kashi, and begot Paundraka Vasudeva through her.

Paundraka Vasudeva was the well-known evil person Vena in his earlier birth. He used to declare that he was Vishnu Himself.

Vasudeva married Danu, who was born as the daughter of King Karavira, and begot Srigala through her.

Srigala was the demon Dhundhu, the son of the demon Madhu. He and Paundraka Vasudeva became the enemies of Yadavas later.

Vasudeva did not entertain these two wives after he married Devaki.

He begot Balabhadra among the nine sons and one daughter (Subhadra or Chitra) through Rohini.

They were six sons of Marichi. They laughed at Sage Devala, as he was very ricketee.

He cursed them. They were born as the sons of Kalanemi. They came to be known as Sadgarbha.

They used to remain in the water at Patala loka performing penance to obtain immortality. Brahma granted them immortality.

However Hiranyakashipu became angry at this. He did not like his brother’s grandsons obtaining a boon from Brahma (Kalanemi was the son of Hiranyakashipu’s brother Hiranyaksha).

Therefore, he cursed them to be born again and be killed by their own father.

Accordingly, they were born as Devaki’s children and were killed by their own father.

Kamsa as Kalanemi was their father in their earlier birth.

The boon given by Brahma to be immortal and the curse given by Hiranyakashipu to be killed by their father were reconciled by Durga.

Durga used to keep each one of these in a cave and make them sleep for one full year.

She used to take the jiva of each one and put it in the embryo of Devaki, thus acquiring a new body. It used to be killed by Kamsa.

Durga used to take back this jiva and put it in the sleeping body again.

Thus, they were killed by their father Kamsa i.e. Kalanemi and were also immortal.

Durga performed this trick as per the direction of Bhagavan.

The birth of Yudhistira,  Pandu desired to go to Brahmaloka. However, he was destined to get children by niyoga.

One can attain the goal of his life by fulfilling the purpose for which one is born.

Pandu was born to get his children by niyoga. Therefor the sages prevented him in the meanwhile Indrajit and other demons were born as the children of Dhrtarashtra.

On hearing this and upon the advice of the sages, Pandu asked Kunti to beget children by niyoga.

Kunti told him that she knew a sacred mantra by which she could invite the deities who were superior to Pandu.

She requested Pandu to name the deity she should invite. He asked her to invite Yamadharma.

She invited him and begot the son Yuddhishtira.

When Gandhari learned about the birth of Yuddhishtira, she became jealous and crushed her womb.

Vedavyasa collected the pieces of her womb and put them in 101 jars. A hundred male children were born at the rate of one per day.

The birth of Duryodhana, Dushasana and other Kauravas 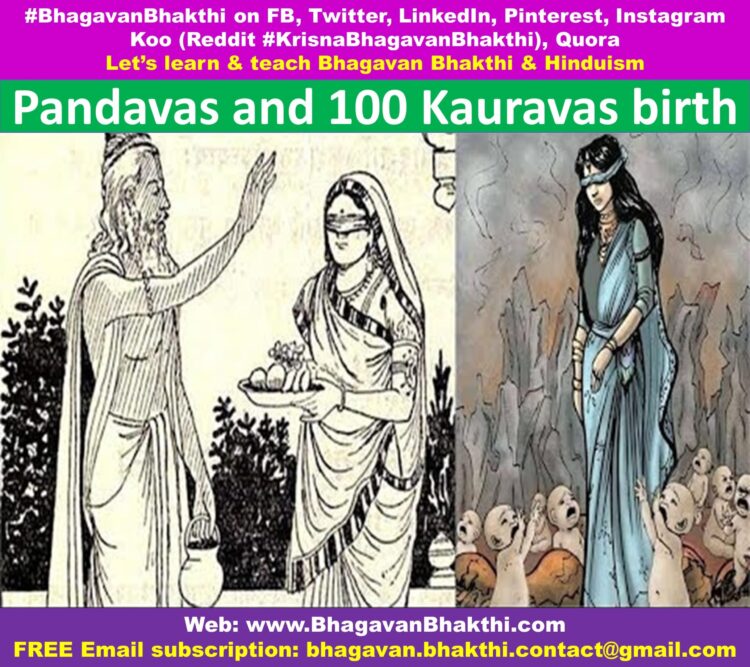 Kali was born as Duryodhana. As soon as he was born, he produced a sound like that of a donkey.

The donkeys present outside responded in the same way.

Vidura advised Dhrtarashtra to throw him out. However, the demons had already obtained a boon from Shiva that he should be invincible.

Indrajit was born as Dushasana, Atikaya as Vikarna, and Khara as Chitrasena.

In the same way, different demons were born as Dhrtarashtra’s children.

The demon woman Mrisa was born as Dushala. Kuhu was also present in her.

The demon Kalakeya was born as Jayadrata, who was responsible for killing of Abhimanyu.

The birth of Bhimasena and Balarama

Pandu also asked Kunti to invite Sri Vayu Deva. She recited the sacred mantra given by Durvasa Muni and invited him.

Vayu touched her and was born as Bhimasena. On the tenth day of Bhimasena’s birth, Kunti saw a tiger and dropped him.

The Shatashringa mountain on which Bhima fell broke into a hundred pieces.

When Bhimasena was two months old, Shesha was born as Balarama.

Balarama was in Devaki’s womb for three months, and then Durga took him to Rohini’s womb. He was born seven months later from Rohini’s womb.

The incarnation of Sri Krishna Three months after Balarama’s birth Krishna was born.

The birth of Krishna is only an eye wash; God has no birth. He revealed Himself in the form of a child and pretended to grow like an ordinary child.

This is clear from the fact that He revealed Himself to his parents holding the conch, disc, which are His insignia.

Krishna asked Vasudeva to take Him to Nanda’s residence where Durga was born who was the daughter of Nanda Maharaja.

Vasudeva went to Gokula, left Krishna by Yashoda’s side, brought Durga, and gave her to Devaki.

Kamsa came and took Durga with the impression that the child was the eighth child and crushed it on a rock.

The child jumped into the sky and revealed her true form with eight hands holding the respective weapons.

She told Kamsa that his destroyer was born elsewhere.

She became a child again and lay on Devaki’s bed. Kamsa returned home and consulted his ministers.

They told him that all newly born children should be killed. He instructed them to do so.

At the other end Nanda and Yashoda were very happy with their child Krishna. They gave Brahmanas a gift of twenty lakh cows.

Nanda was camping on the bank of the Yamuna river when Krishna was brought. He was on his way to pay taxes to Kamsa.

As he returned, a demon named Putana also arrived and tried to give her poisonous breast milk to Krishna.

However, Krishna sucked her breast and killed her.

Amalgamation of Tataka (demon during the Treta yuga) and Urvashi were present in Putana.

The former went to hell while the latter returned to heaven.

Urvashi had sported with the Gandharva Tumburu without Kubera’s permission.

Therefore, Kubera had cursed her to be born as a demon for sometime.

When Krishna was four months old, the ritual of utthana, i.e. the child trying to get up and rolling, was performed.

At this time, the demon Shakatasura entered a cart and wanted to run over the child Krishna. However, he was killed by Krishna himself.

The birth of Arjuna

Pandu asked Kunti to invite another appropriate deity next to Vayu and get another son.

Since Shesha, Garuda, and Shiva were not appropriate deities at this time, she invited Indra.

Then Arjuna was born. He had the presence of Nara partially.

Vishnu also entered him. Pandu asked Kunti to get one more son.

However, Kunti said it was not proper to have any more sons

The birth of Uddhava

From Upagava, Uddhava. He was Brihaspati himself reborn. Vayu also entered him.

Three years after Uddhava’s birth, Satyaki was born. On the same day, Chekitana was also born.

The order of the birth of chekitana and others is as below:

The Maruta Pratibha was first born as Chekitana in the Yadu family.

At the same time, Kritavarma was born.

After three years, Yuddhishtira was born.

One year later, Ashvatthama was born.

After four days, Duryodhana was born. He was in Gandhari’s embryo for two years.

In order to show Yashoda that He was God Himself, Krishna showed her Brahmanda in His mouth. Krishna killed Trinavarta afterwards.

The birth of Nakula and Sahadeva

Madri also desired to have children.

Kunti agreed on the condition that Madri would only use it once.

Madri cleverly invited the Ashvini Kumara deities, so that she could get two children by inviting a deity only once.

Vayu entered the Pandavas, who were Indras.

Vishnu is the first Indra, Vayu the second, and Yamadharma the third. Nasatya and Dasra were the fourth and fifth Indras.

Purandara was the sixth and seventh Indra. In this way, the five Pandavas were Indras.