By arranging Swayamvara, Rukmi the son of Bhishmaka planned to give Rukmini in marriage to Shishupala.

Demon Ilvala had reborn as Rukmi in the Dvapar Yuga. Also the son of Vahni had entered him as an amsha.

He had studied Dhanurvidya from Druma and had secured the bow – Vijaya of Indra. This was equal in strength ot Gandiva and Saranga.

When swayamvara was announced Jarasandha, Salva, Paundraka and Shishupala arrived in the Vidarbha. 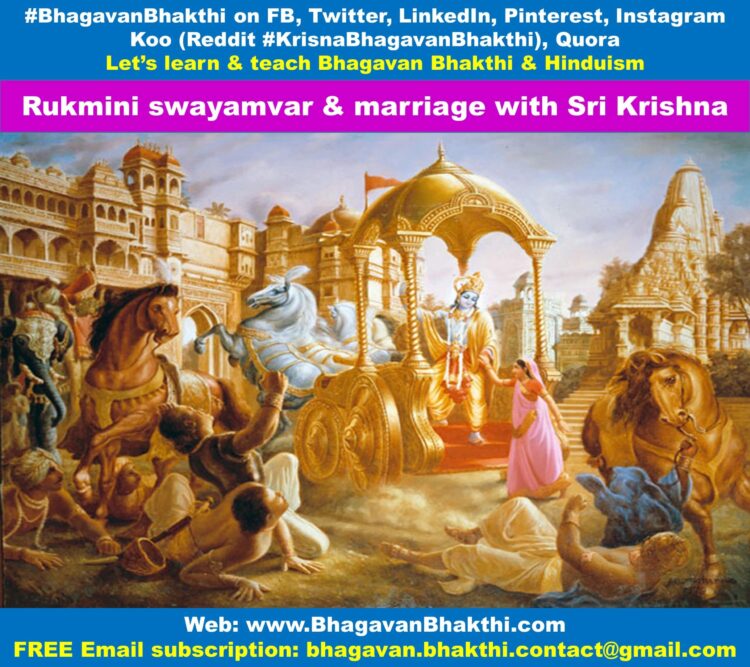 When Shishupala and Dantavakra found that Sri Krishna had arrived they pleaded with others not oppose to Sri Krishna. After all they were originally devotees of Sri Krishna (remember the curse given by Sanata Kumaras to the gate keepers of Sri Hari and their names were Jaya and Vijaya).

However Jarasandha opposed it.

Sri Krishna was not duly coronated on the throne.

Therefore he was not entitled for a seat in the swayamvara hall nor for any hospitality.

(This is only materially thinking and as per our Shastras to the ordinary humans who live on this earth. Sri Krishna always shows us the path to be on the Sanatana Dharma path and thus always informs us to be in the Dharma path).

They thought if they did not provide him a seat he would go away.

Kratha and Kaisika the brothers of Bhishmaka came to know of it. They took Sri Krishna to their residence and arranged for Sri Krishna’s coronation.

In the meanwhile a messenger of Indra Deva came and advised the princes gathered to coronate Sri Krishna.

He said Indra Deva would throw vajrayudha on them if they failed to carry out his order.

Indra Deva did not want Jarasandha, Rukmi, Salva and Shishupala to participate in the coronation of Sri Krishna. Therefore he has asked them not to join.

They also did not want to join as they were all enemies of Sri Krishna. 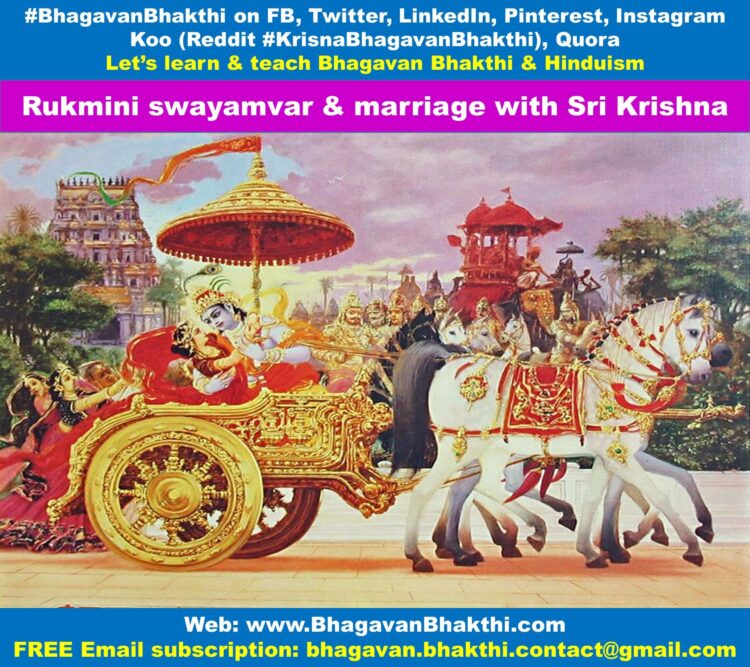 Indra Deva sent a richer and grand throne. Sri Krishna made Garuda sit on the right side Kratha, Kaisika and satyaki on left side.

Then coronation bath was given using a golden pitcher.

Sri Krishna blessed Bhishmaka and said his daughter’s marriage would be auspicious. He revealed his Vishvarupa to him.

Jarasandha was very much upset by this development. He said their plan was upset.

Sri Krishna was coronated in their very presence. They thought that they should conceive of another plan to get Rukmini married to Shishupala.

Once in presences of Sri Krishna, yadavas insulted Garga.

On this Garga performed penance to Lord Shiva to get a son who would eliminate Sri Krishna.

During the penance he subsisted on iron pieces. A Yavana king (probably today’s Yamen country) wanted a son. He managed to tempt Garga to sport with a Gopa woman who was a Demon and had managed the Gopis.

Garga begot a dark son through this woman. He was Kalayavana.

Though Garga begot such a son and gave him to Yavana king, he felt repentant and performed penance to Sri Maha Vishnu.

Salva said that they might utilize this Kalayavana to kill Sri Krishna.

Jarasandha felt below his dignity to seek help from others. Jarasandha always thought himself has superior and others as inferior.

However, Salva went and brought Kalayavana.

Sri Krishna came to know that Kalayavana would attack Mathura and harass Yadavas.

Therefore he thought of building a new city i.e., Dvaraka and shifting the Yadavas from Mathura.

A grand city with Sudharma hall was built.

Earlier the city of Kushastali was in the same place.

The Yadavas moved to this new city.

Sri Krishna went to fight Kalayavana without any army. He put a snake in a jar and sent it to Kalayavana, thereby indicating that he alone could kill him.

Kalayavana returned it filled with ants that killed the snake, thereby indicating a large number of ants could kill even a snake. This was the mistake on his part.

Garga had secured the boon that his son would eliminate Sri Krishna.

This was fulfilled by killing the dark snake by Kalayavana.

Now, Sri Krishna could not be killed.

Thus the very purpose of Kalayavana’s birth was defeated by this act.

However, he did not want to kill him himself. He pretended to run away., Kalayavana followed him.

Sri Krishna entered into the cave of Muchukunda and hid himself.

Kalayavana kicked the sleeping Muchukunda and he was burnt down into ashes.

Muchukunda’s long sleep had a background.

He asked for long and deep sleep.

He said, if anyone disturbed him he should be burnt down.

This had exactly happened to Kalayavna.

Sri Krishna came out of the cave and defeated Jarasandha, Salva, Paundraka and Shishupala and went back to Dvarka.

Jarasandha etc again planned to arrange the marriage of Rukmini with Shishupala.

Rukmini sent a message through a Brahmana that when she visited the family deity as a preliminary pooja to her marriage, Sri Krishna should take her away.

Accordingly Sri Krishna rushed to the temple and took her away.

Sri Krishna defeated all others.

On return to Dvaraka, Sri Krishna’s marriage was arranged with all pomp. 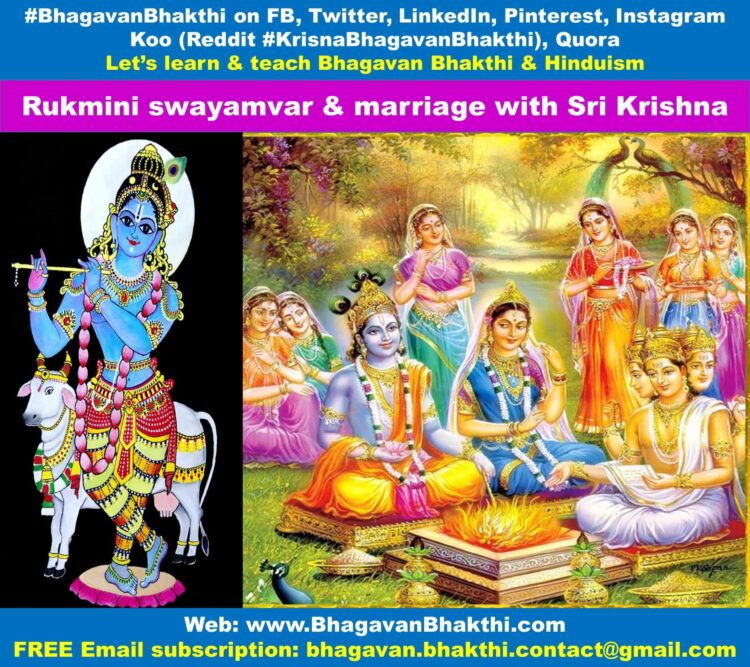 Since, inside Praduymna there was an amsha / form of Sri Hari and thus he was also known as Pradyumna (Sri Hari’s another name is Pradyumna).

Narada Maharshi had told Shambara that Pradyumna would kill him.

Therefore Shambara took away Pradyumna as soon he was born and threw him in the sea.

A huge fish swallowed the baby.

A fisherman cut the fish and got the child. He handed it over to Shambara.

Manmatha / Kama Deva’s (avatara of Praduymna) wife Rati Devi was with Shambara due to a curse by Brahma Deva.

Rati Devi was happy to get her husband Manmatha in the form of this baby.

She gave Parashurama mantra to him. With the help of this mantra Pradyumna killed Shambara and returned to Dvaraka. 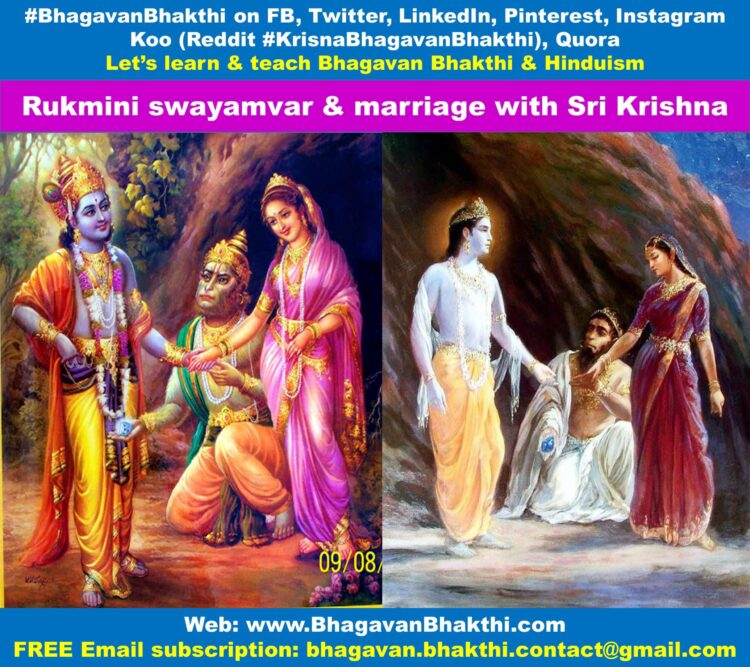 Satrajita had obtained Syamnatakamani from the Surya Deva / Sun Demigod.

He was a good friend of the Surya Deva.

But Satrajita was a greedy person.

Sri Krishna asked him to give Syamnatakamani to him in order to expose his greediness.

Naturally he refused to give.

Sri Krishna went to forest to find out the truth. He traced the place where Prasena was killed by his foot prints.

Sri Krishna also traced the fact that this lion was killed by bear.

Following that clue he went into the cave of Jambuvan.

Jambhavan soon realized that Sri Krishna was Bhagavan by himself.

Jambhavan gave Syamnatakamani to him and also his daughter Jambhavati (She is an avatara of Sri Tulasi Devi).

They sent a Brahmana messenger to Sri Krishna with the demand that Sri Krishna should supply salt to the sacrifice as he lived on the sea shore.

Sri Krishna sent back a message he would rather give a hit by sharp weapon and invited them to Pushkara (sea shore).

In the meanwhile Hamsa and Dhibika had insulted Dhurvasa Muni by taking away his Kaupina (loin cloth / a form of dress) and other things.

Vichakra and Hidimba also accompanied them.

There was a seventeen akshauhini army.

On the Yadava’s side there was only three akshauhini army.

Balarama, Satyaki and Gada also participated in the fight.

Hamsa entered into the mouth of snake called Dhritarashtra.

Dibhika pulled out his out his own tongue and went into Tamas. He waited for his brother at the Tamas.