What causes greed & how to deal it in Hinduism (Durjaya story)

Let’s understand this with an example from our Hindu Puranas:

During satya yuga, there lived a king named Suprateeka. Although he had two queens, yet none of them bore any son to him.

One day, Suprateeka went to meet sage Durvasa, who had his hermitage at the foothills of chitrakuta mountain and engaged himself in the service of Durvasa. The sage blessed the king and prophesized that he would become a proud father of a mighty son named Durjaya. 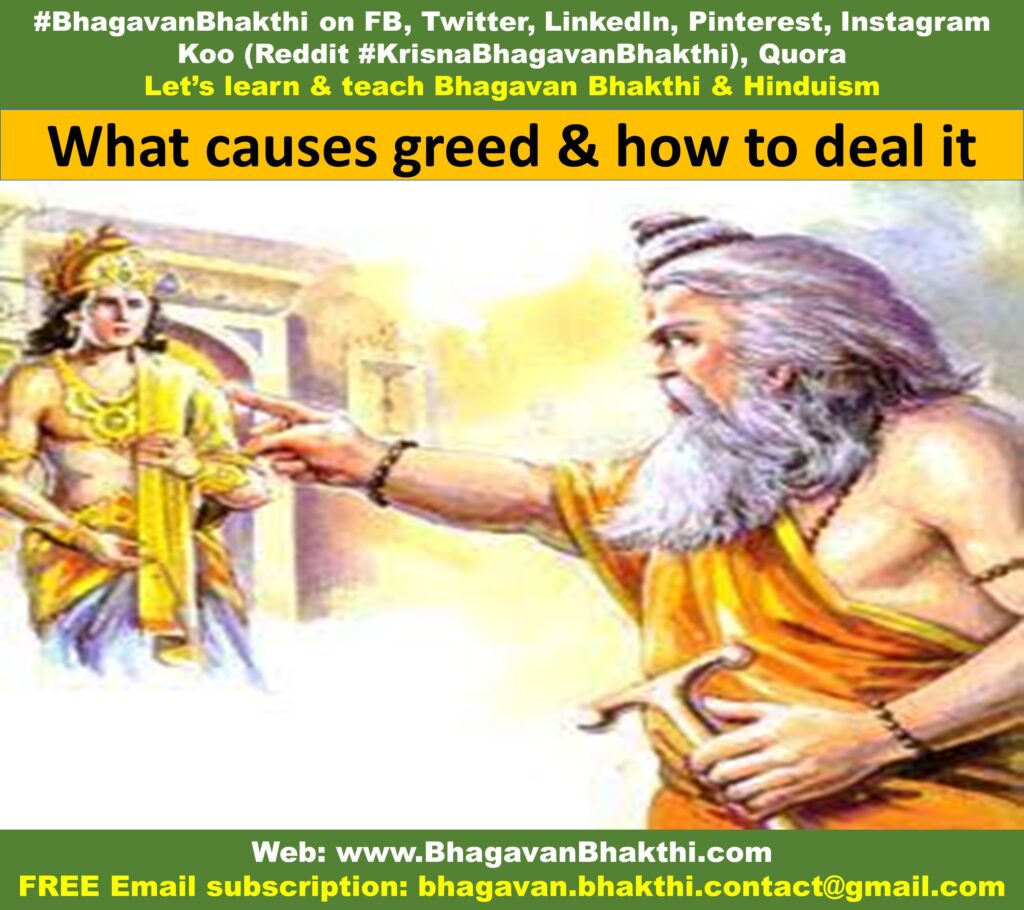 In course of time Durjaya grew up to become a worthy successor of Suprateeka.

Suprateeka decided to spend rest of his life in the service of Bhagavan, so he went to Chitrakuta mountain to do penance.

Mean while, Durjaya being an ambitious king expanded his kingdom by subjugating all the neighboring states.

Durjaya conquered numerous mighty kingdoms and vanquished almost all the prominent warrior castes like – gandharvas, kinnars, demons and even the deities.

Indra-the lord of the deities was defeated by Durjaya and was forced to retreat towards east of Sumeru mountain along with the lokpals – various Lords protecting different regions of the Universe.

The whole world went into turmoil as the fallout of Lokpal’s power being snatched by Durjaya.

While Durjaya was returning to his capital along with his victorious army, he met two asuras – Vidyuta and Suvidyuta, who had disguised themselves as sages.

Both the impersonators requested Durjaya to make some alternative arrangements so that the world could function smoothly.

In reality, both of them harbored wishes of having the powers of Lokpal’s, so they offered their services in this regard.

Durjaya, being unaware of their real identity agreed to appoint them as Lokpal’s and then proceeded towards his capital.

While he was passing by the Mandarachala mountain, he saw two beautiful women.

Durjaya was surprised to find them at such a deserted place. As he stood their wondering about their identity, he saw two hermits approaching him.

Both the hermits asked Durjaya – “Who are you? What is the purpose of your arrival?

Durjaya introduced himself and told them that he was on his way to conquer the whole world. Now it was the turn of both the sages to introduce themselves –

We are the sons of Swayambhuva Manu – Hetu and Prachetu. We had successfully defeated the deities and driven them out from their abode – Sumeru mountain.

All the deities went to seek the help of Bhagavan Vishnu and were successful in getting his assurance.

Bhagavan Vishnu then attacked us and vanquished our army, but he spared our lives.

Then onwards we became ardent devotees of the merciful Bhagavan Vishnu.

Hetu, then pointing towards one of the women said – She is my daughter – Sukeshi. The other woman you see is my brother – Prachetu’s daughter and her name is Mishrakeshi.

Please accept both these beautiful ladies as your wives.

Durjaya readily agreed to marry both of them, as they were really very beautiful. He then returned to his capital.

Everything was going quite smoothly for Durjaya, when on one fateful day he met his downfall because of his extreme greed.

The incident happened as follows –

Once, Durjaya had gone into the forest on a hunting spree, where he met a sage named Gauramukha.

Gauramukha had been blessed by Bhagavan Vishnu with a divine diamond named Chintamani which was capable of fulfilling all desires.

Gauramukha gave a royal treatment to Durjaya with the help of wish-fulfilling diamond.

He created an illusionary palace and offered variety delicacies to him as well as his whole army.

Durjaya wanted to have Chintamani diamond at any cost and therefore sent his minister-Virochana to persuade Gauramukha to part with that diamond.

Gauramukha became furious after coming to know about the evil intention of Durjaya and told Virochana to ask Durjaya to leave at once.

But, Gauramukha knew quite well that the greedy Durjaya would not give up so easily and would definitely try to acquire Chintamani by force.

So, he requested Chintamani diamond to create a huge army.

Meanwhile, Durjaya ordered his chief-commander, named Neela to bring Chintamani at any cost.

Neela proceeded with a large number of soldiers.

A fierce battle took place between both the armies in which Neela was killed and his army got vanquished.

Finally, Durjaya himself came forward to fight, but even he was defeated.

In the meantime, Hetu and Prachetu got the news that their son-in-law was in trouble.

Both of them proceeded with a huge army to help their son-in-law.

But, they were no match for the might of their adversary and both of them eventually died in the ensuing battle.

Meanwhile, sage Gauramukha found Durjaya standing at the entrance of his hermitage with a small number of surviving soldiers.

He sought the help of Bhagavan Vishnu, who appeared within no time. Gauramukha requested him to punish Durjaya for his evil intention.

The place where Durjaya was killed later on became famous as Naimisharanya.

Sage Gauramukha continued to live at Naimisharanya without any problem.

PS: The above is taken from Varaha Purana.

Let us take another example from our Puranas that is of a crow story: 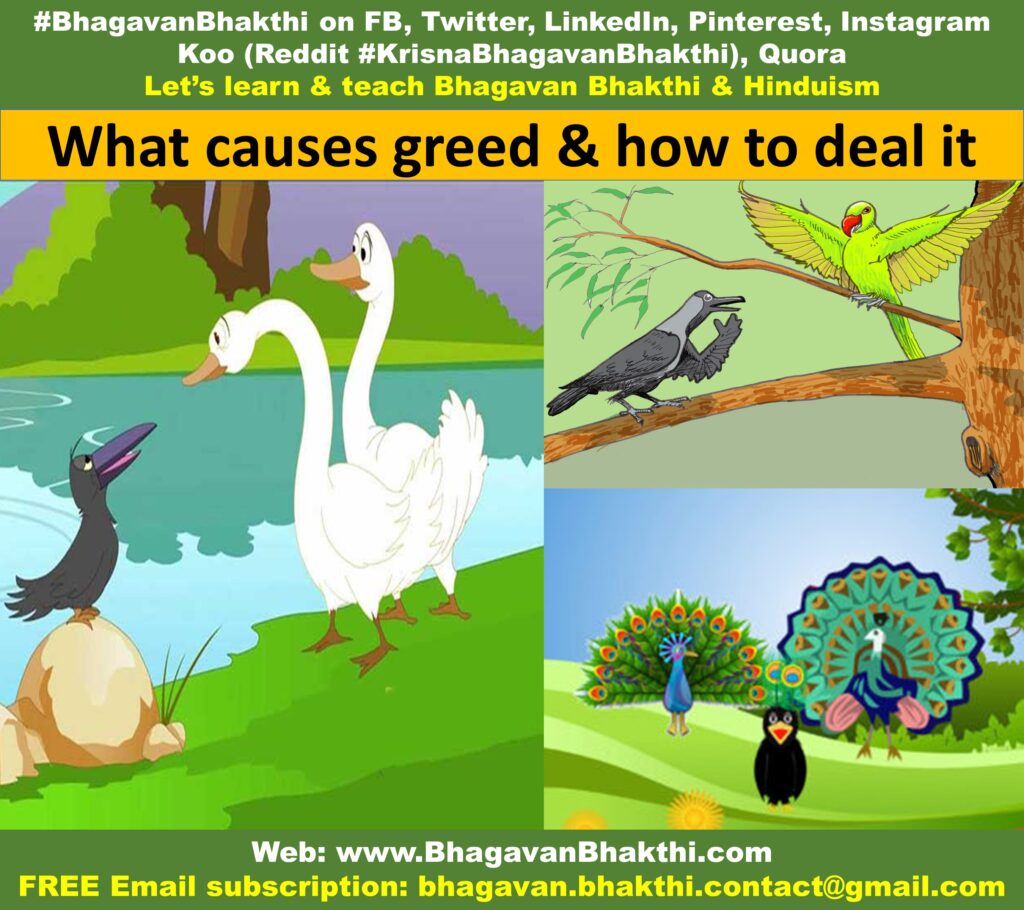 A black crow lived in the forest and was absolutely happy and satisfied in it’s life.

But one day it saw a beautiful white swan. “This swan is so white,” crow thought, “and I am so black. This swan must be the happiest bird in the world.”

Crow expressed it’s thoughts to the swan. “But,” the white swan replied, “I was feeling that I was the happiest bird on earth, but when I saw parrot, which has two colors, now I think the parrot is the happiest bird in the whole world as it is more colorful than me.”

The crow then moved towards two colored parrot. The two parrot told, “I lived a very happy life, but when I saw a peacock, which has multiple colors on it’s body, but I have only two colors”

The crow then approached the peacock, and saw that many people had gathered to see it.

When all the people left the place, the crow went to the peacock and said: “Dear peacock,” the crow said, “you are so beautiful with multiple colors on your body. Every day so many people come to see you. When people see me, they immediately shoo me away. I think you are the happiest bird on the earth.”

Hearing these words peacock replied, “I always had the notion that I was the most beautiful and happy bird on the earth, but because of my beauty, I am entrapped in this zoo”.

Peacock continued: “I have examined the zoo very carefully, and now I have realized that the crow is the only bird not kept in a zoo and that too in a cage. So for past few days I have been thinking that if I were a crow, I could definitely be happily roam everywhere as per my own wish and will.”

This shows the greed within us too. We always make unwanted comparison with others and become sad. Many of us never value what Bhagavan / God has given us. Thus all leads to the vicious cycle of unhappiness, unsatisfied life, jealously, greed.

Thus we need to learn the secret of being happy and discard the comparison which leads only to unhappiness, unsatisfied life, jealously, greed etc…

One of the best way to lead a happy and satisfied life is to understand the divine “Srimad Bhagavad Gita”, which was preached by Bhagavan Sri Krishna to Arjuna.

Bhagavan Sri Krishna didn’t preached only to Arjuna, but to the entire human clan on this earth.

To know “Most popular Shlokas of Bhagavad Gita in Sanskrit, Kannada, English with meaning”, please visit the below link:

Most popular Shlokas of Bhagavad Gita in Sanskrit, Kannada, English with meaning