There are four yugas (eras). They are known as Satya yuga or Krita yuga, Treta yuga, Dwapara yuga and Kali yuga.

Four such yugas constitute a Mahayuga and a Mahayuga lasts for twelve thousand years of the Devatas / Demigods. 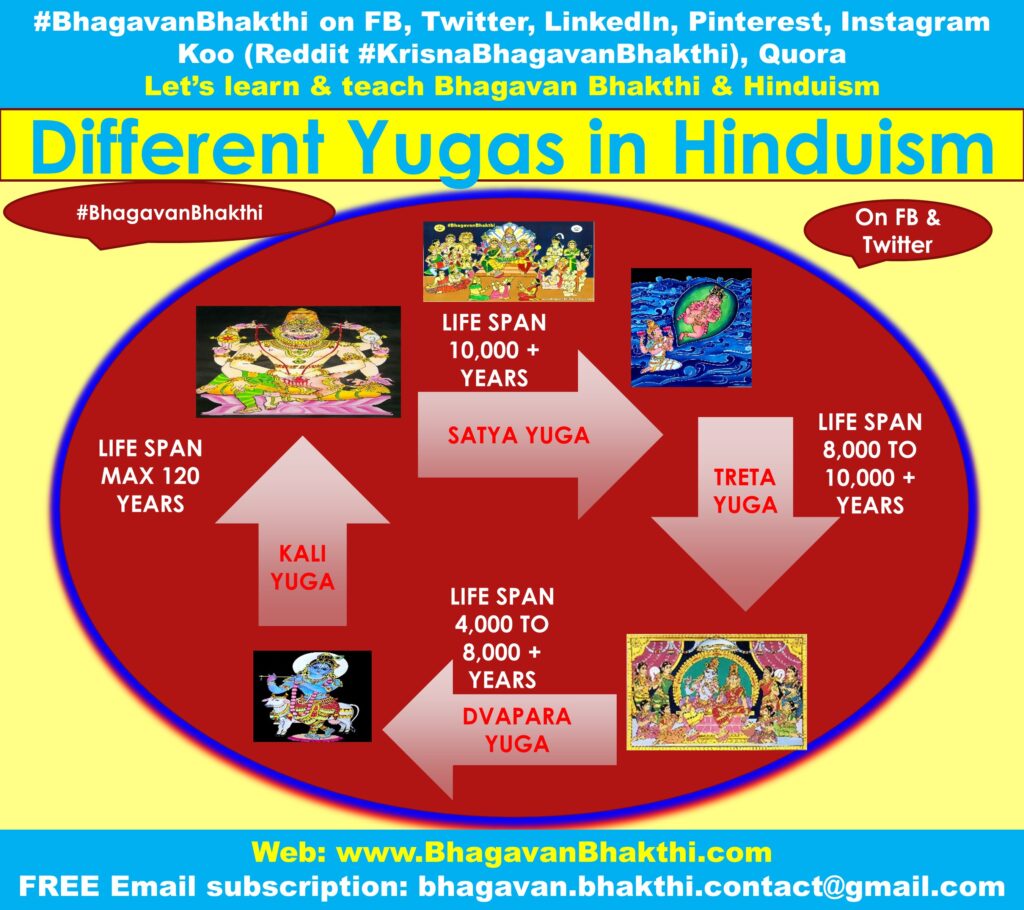 The present Mahayuga has been seen the following avatars of Bhagavan Srimann Narayana:

List of different Yugas with meaning in Hinduism are as given below:

2. Treta yuga: Sri Ramachandra Prabhu and his sahodara Sri Lakshmana and Sri Hanuman was also there.

One Manu rules a Manvantaram composed of 71 Mahaayugams. (Current manu is Vaivasvata, the son of the Sun, Vivasvana).

14 Manvantaraas is one day for Brahma and known as Kalpam. Other 14 will be nights.

For such 100 years, one Brahma is the shruti-karta.

(And such infinite number of Brahmas have passed, so many that people no more have count of them. Imagine how tiny is the life of a human being in this! Yet a human has ahankaar that surpasses everyone’s). 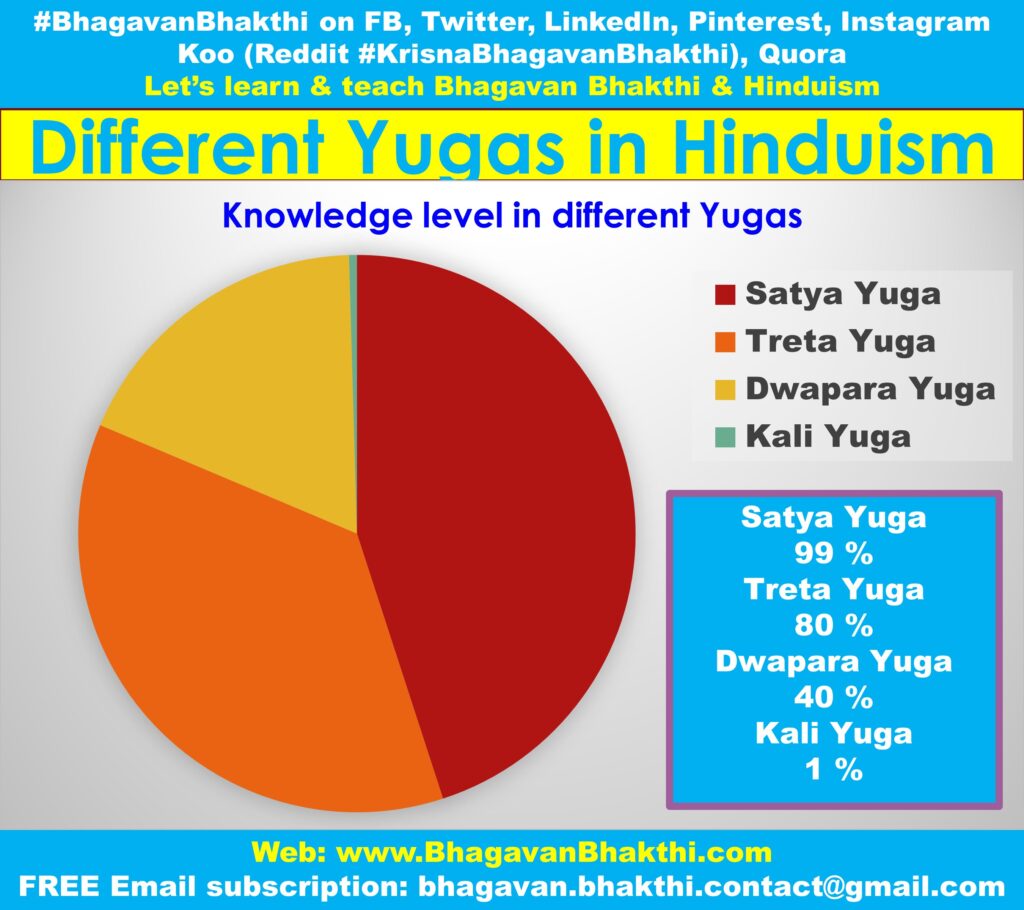 In Satya yuga dharma reigns supreme and everyone is as righteous as the gods. Each varna pursues the duties that are prescribed for it and people are devoted to Vishnu and to tapasya.

The law of the four ashramas is meticulously followed and the Vedas are studied. Life expectancy in Satya yuga is minimum from 4,000 to 10,000 and if a person is real Dharmamaatma then it can reach to 1,00,000 years also.

In Treta yuga the miseries of people increase, although the dictates of dharma continue to be followed. Here life expectancy in Treta yuga is 1,000 years to 10,000 years.

In Dwapara yuga the power of dharma diminishes and the Vedas have to be divided to disseminate the knowledge among humans. People start to lie and anger and hate start to become common.

If yajnas are performed, they are always with some end in view, not because of selfless and altruistic reasons. Life expectancies start to diminish. In Dwapara yuga life expentancy is 100 years to 1,000.

Kali yuga is the worst of the four eras. It is extremely rare to find a righteous person. Yajnas also become rare. Jealousy, vanity and hatred are however very common. 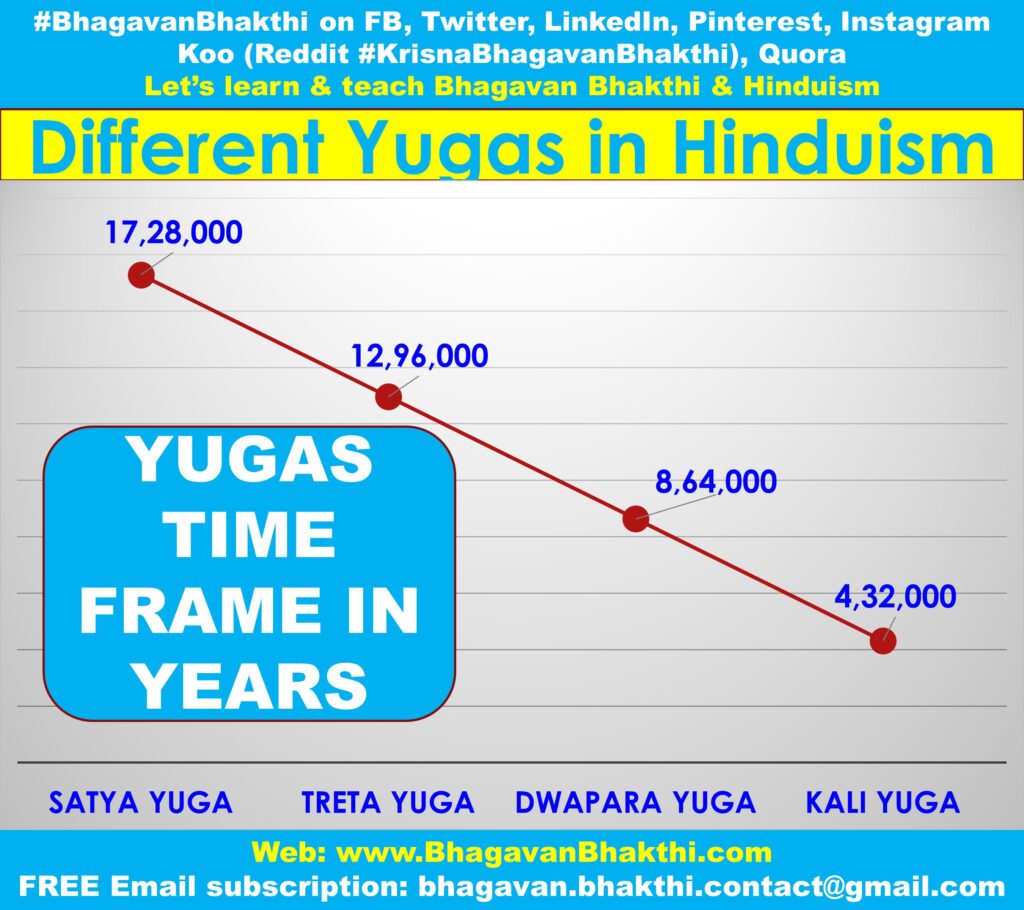 People do not live for very long. Even the Brahmanas stop studying the Vedas. The kings who rule then are bad kings; they are obsessed with the idea of accumulating wealth.

In fact, the word king conveys no meaning at all. Anyone who has many chariots, horses or elephants comes to be called a king. The Brahmanas become the slaves of the Shudras.

The Brahmans strive after evil pursuits and forever try to acquire the possessions of others.

Sons hate their fathers, students their teachers, and wives their husbands and vice versa.

Lobham will be at the top level.

No manushya prema will be involved.

Everyone wants money, many will be ready to kill anyone for mere money and wealth.

Many other religions who don’t follow Dharma will be formed.

Mlechhas start to think their own religion as the best and they want to spread there religion all over the world.

Mlechhas will force the common people to change there religion to become Mlechhas.

Mlechhas will be very rich people who will make common and ordinary people to change to there religion by showing lobham of money, wealth, etc.

These Mlechhas will think the cow slaughter as there main duty.

They even plough the banks of rivers to grow food grains.

If cows are taken care of, that is only because they provide milk.

No one likes a person who is devoted to Vishnu.

Towards the end of kali yuga, almost no one even remembers the name of Vishnu.

but because evil reigns supreme in kali yuga, a minor good act in kali yuga gives a lot of punya.

The punya that takes ten years to be acquired in satya yuga can be acquired in one year in treta yuga, one month in dwapara yuga and one day in kali yuga.

The punya that required meditation and sacrifices in the other three eras can be acquired through just chanting the name of Vishnu in kali yuga.

Vishnu is the salvation for everyone in kali yuga. (And also in other Yugas too.)

4. In Kali Yuga, just simply we need to chant Sri Hari’s one or different names throughout our life to get the moksha.

So only chanting Bhagavan Sri Maha Vishnu names is the best and easiest way to get rid of all bad happenings.

Even to get moksha the chanting of Bhagavan Sri Hari names is the best way.

OM NAMO NARAYANAYA is the easiest and simplest way.

To know different time frame according to Sanatana Dharma / Hinduism, you can visit my other post. The link is here: