What is the Kuber, Ravana, Kaikesi story

Kubera (He is a yaksha) was the real Raja of the Svarna Lanka Pattana (golden Lanka city).

Kubera was ruling the raajyam / kingdom of the Lanka Pattana / city very well with the aashirvaadam / blessings of the Lord Shiva and Bhagavan Sri Maha Vishnu.

Kubera is the half brother of Ravana. 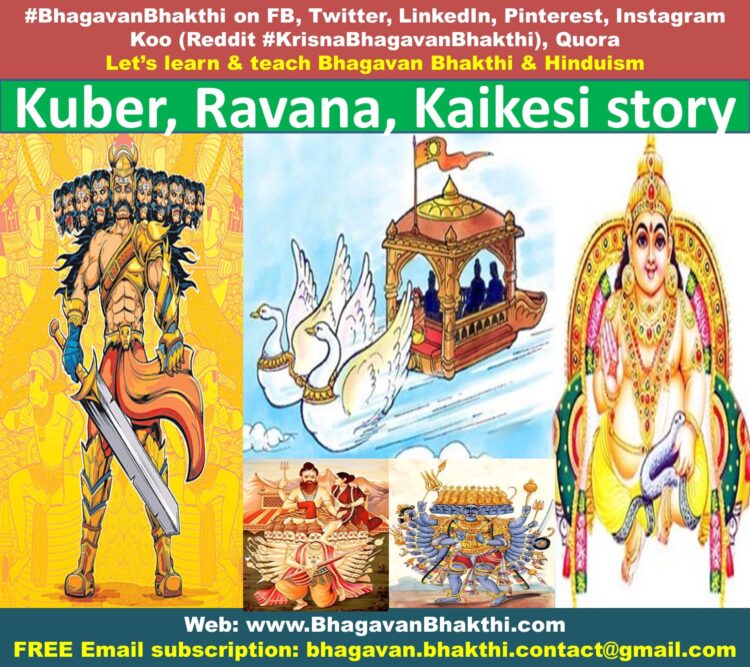 After many varsham (years), Kaikesi started to feel jealousy of the Kubera. She started to think why his son Ravana need to be under the niyantranam / control of Kubera.

So Kaikesi gave aadesham / order to her kumaara / son Ravana along with his other kumaaras / sons (Kumbhakarana and Vibhishana) that why you all are under the niyamtranam / control of Kubera. Why don’t you go and get the Lanka Pattana / city.

After this, all the three bhratras (brothers) started to do a tapasya to Lord Brahma Deva.

After some kaalam / time Lord Brahma Deva came in front of the three bhratras and asked them what is the uddhesham / purpose of your ghana ghora tapasya (highly difficult penance).

Thus Vibhishana asked “O Lord Brahma Deva give me the aashirvaadam / blessings, so that I won’t be out of path of Dharma even when I am in santosham (happiness) or in dukham (sadness) or in any paristiti (situation).”

“Also give me the aashirvaadam / blessings of using the Brahma-astra without anybody giving me the shiksha / lessons of how to use the astra”.

For this Brahma Deva told tatastu (as per your wish).

Kumbhakarana asked as “O Brahma Deva give me the aashirvaadam / blessings, so that I always be in gaada nidra (deep sleep) for at least half of my life”.

As usual Lord Brahma Deva told tatastu (as per your wish) to Kumbhakarana also.

But after a while Kumbhakarana felt bad of his murkhatvam / stupidity for the aashirvaadam / blessings he got from the Lord Brahma Deva. 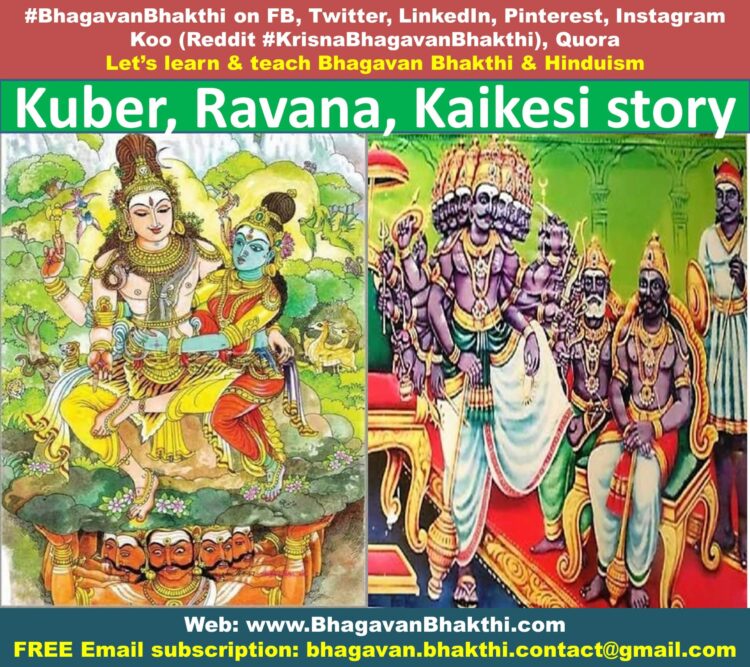 Also getting the aashirvaadam / blessings and abhayam (not feeling afraid) from the Lord Brahma Deva, Ravana and his sahayogis (his followers) made aakramana / attack on the Kubera, the Raja of Lanka and made him to run out of the Lanka.

Thus from this time Ravana was also known as Lankaadipati (the King of Lanka).

Ravana also instructed to all whoever gives aashrayam (refuge) to Kubera and his sahayogis (his followers) will be sent to yamalokam.

Because of this Kubera went to his pitaamaha (grand father) Maharshi Pulastya.

Maharshi Pulastya told to do tapasya of Lord Shiva after taking the snanam (bath) at the river Goutami Ganga (or Godaavari).

In return Lord Shiva instructed and gave aashirvaadam to Kubera that from now onwards you will be the raja of aishwaryam / wealth.

We should note that earlier Kubera lost all his kingdom, wealth, etc. But with the blessings of Lord Shiva, Kubera became the King / raja of aishwaryam / wealth.

This is the greatness of believing in Bhagavan and Devatagan / Demigods.

Also, we should note that finally what happened to Ravana. He himself welcomed his end by doing all wanted things which are against the Dharma and was killed by Bhagavan Sri Rama Chandra Prabhu. 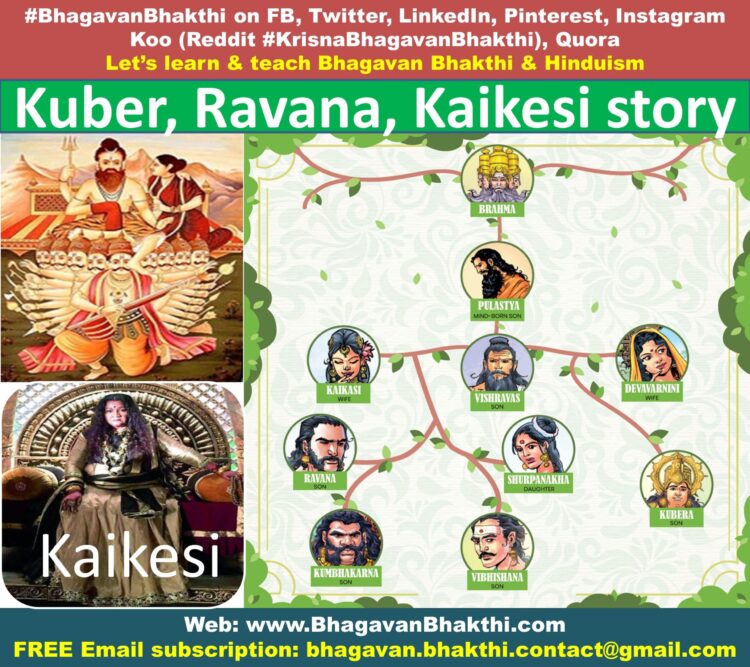 PS: That’s why in Bharatiya samskruti (Indian culture) many elders always will be telling, “anything happens for the good only with the grace of the Bhagavan”.

We as maanavas / humans should only be praying to Bhagavan and nothing else.

(Also it should be remembered that praying to Bhagavan for only aishwaryam / wealth with lobham / greed would not yield the best of the results).

Doing works which are nishkaama (expecting nothing) will definitely bring great prosperity to us and also will lead us to mukti / moksha to anybody.

To know full family lineage of Ravana, click the below link:

Who were in the Ravana family members