What is Lord Vamana and Bali story

There was a demon named Bali (pronounce this name is Bali and not as Baali) who was descended from Hiranyakashipu vamsham / family.

Extremely strong, he defeated the Devatagans / demigods and drove them out of svargalokam.

The mathru / mother of all the Devatagans / demigods was Sri Aditi Devi and Sri Aditi Devi was never wanted that her sons should suffer at the hands of rakshasas / demons.

Sri Aditi Devi therefore began to pray to Bhagavan Sri Maha Vishnu, so that she might have a powerful son who would provide a befitting reply to the rakshasas / demons, particularly to Bali Chakravarti. 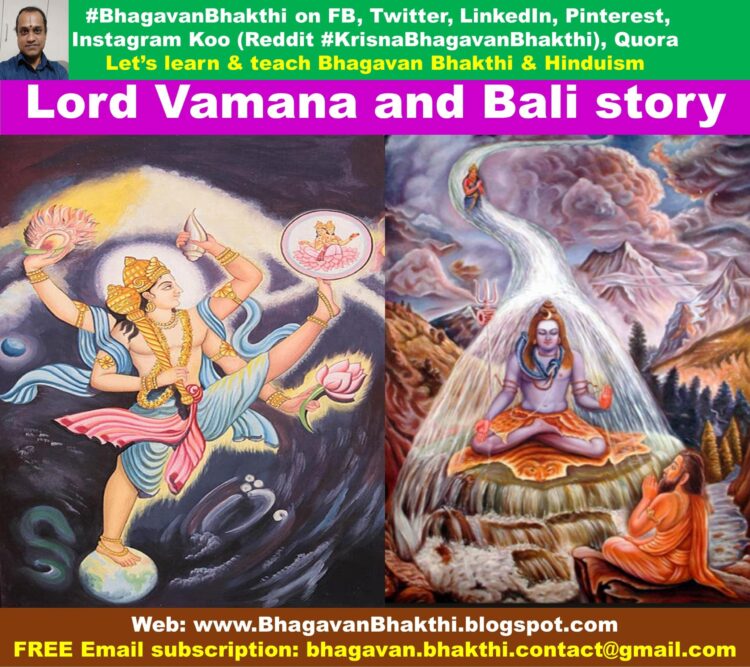 For a thousand years the great Sri Aditi Devi meditated.

Bhagavan Sri Maha Vishnu was pleased at her prayers and appeared before Sri Aditi Devi.

“What boon do you wish for?” Bhagavan Sri Maha Vishnu asked.

“The rakshasas (demons) are oppressing my children,” replied Sri Aditi Devi. “Please grant me a son who will defeat the demons.”

“Do not despair,” said Bhagavan Sri Maha Vishnu. “I myself will be born as your putra / son. I will take care of the Rakshasas (demons).” 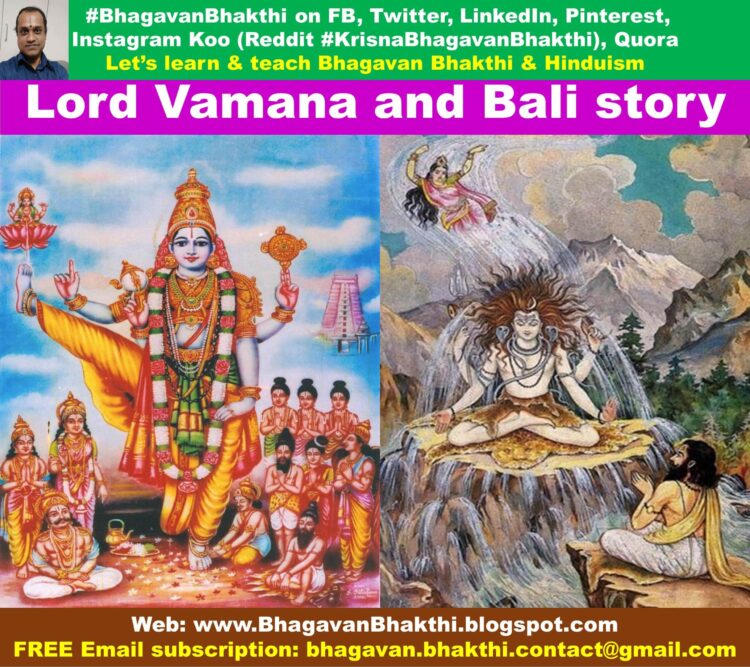 We should note the husband of Sri Aditi Devi is Maharshi Kashyapa.

This putra / son was a dwarf (means Vamana in Samskruta / Sanskrit, so the name Vamana).

Bali Chakravarti happened to organize a yajna and the dwarf sized Bhagavan Sri Vamana came to attend the ceremony.

On the occasion of the yajna, Bali Chakravarti had decided that he would not refuse anyone what they asked for.

Shukracharya saw through the trickery that was involved and realized that the dwarf was none other than Bhagavan Sri Maha Vishnu himself.

Shukracharya tried to put Bali on his guard, and warned Bali that he should not grant what the dwarf asked for. 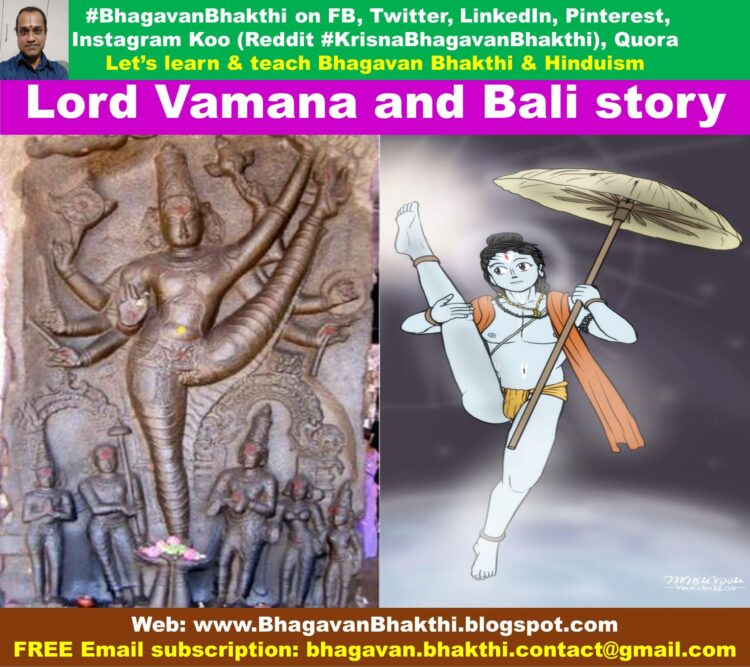 But Bali would not listen.

Bali welcomed the dwarf with offerings.

“What is your desire?” Bali asked. “I am duty bound to give you what you ask for.”

“I desire nothing much,” replied the dwarf. “I do not want gold or riches or elephants or horses. All that I ask for is as much of land as can be covered in three of my footsteps.”

No sooner were the words uttered that the dwarf assumed a gigantic form. His head rose way up into the sky and easily touched the Satyaloka (Sri Chatur Mukha Brahma Deva’s planet).

Thus, Bhagavan Sri Vamana asked Bali where should he keep his third leg as the vast raajyam (kingdom) of Bali has been completely covered by the first two steps itself. 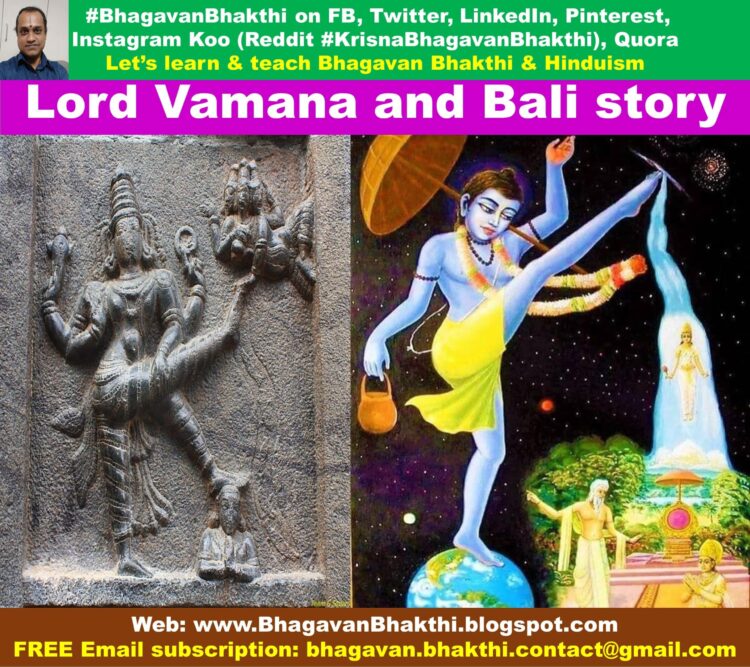 Finally Bhagavan Sri Vamana keeps his third leg on the Bali’s head and pushes him into the Paatala loka.

Even today Bali is still there in Paatala loka with the blessings of Bhagavan Sri Maha Vishnu and is the king of that Paatala loka.

Bali will be the next Sri Indra Deva in the coming Manvantara.

During the Deepavali time we celebrate the Balipadyami on account in the name of Bali chakravarti.

This is the greatness of Sri Hari.

Sri Hari gives everything to his Bhakta / devotee, even though he may be a rakshasa / demon.

But we should read the full Purana to understand this.

Earlier during the ‘samudra manthana’, same Bali Chakravarti was the king of the rakshasas / demons and was first to do all the adharma karyas (works against the dharma).

Same Bali Chakravarti has caused huge problems to Devatagans and also to humans on the earth.

But still he was a Bhakta / devotee of Bhagavan Sri Maha Vishnu and was also the grand son of the “Maha Bhakta Sri Prahlada Maharaja”. 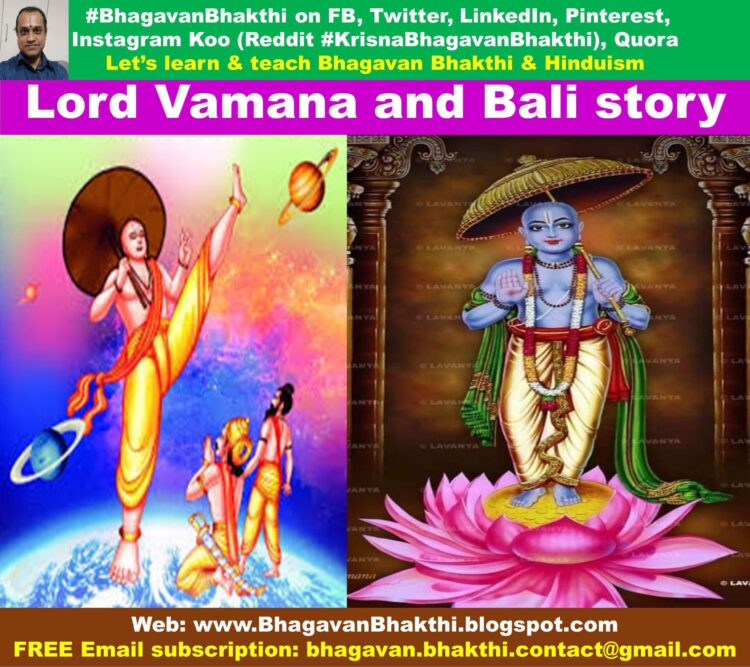 To know the correct meaning of the word “Trivikrama” (another name of Bhagavan Vamana), you can visit this link:

What is Trivikrama correct meaning