There was a king named Gadhi. His daughter was named Satyavati. Satyavati was married to the sage Richika.

Richika arranged for a spectacular sacrifice. Some rice pudding was obtained from the yajna and Richika gave it to his wife Satyavati.

He said, Split this rice pudding into two halves. Eat half yourself and give the remaining half to your mother. Here, let me divide it. This is your half and that is your mother’s. 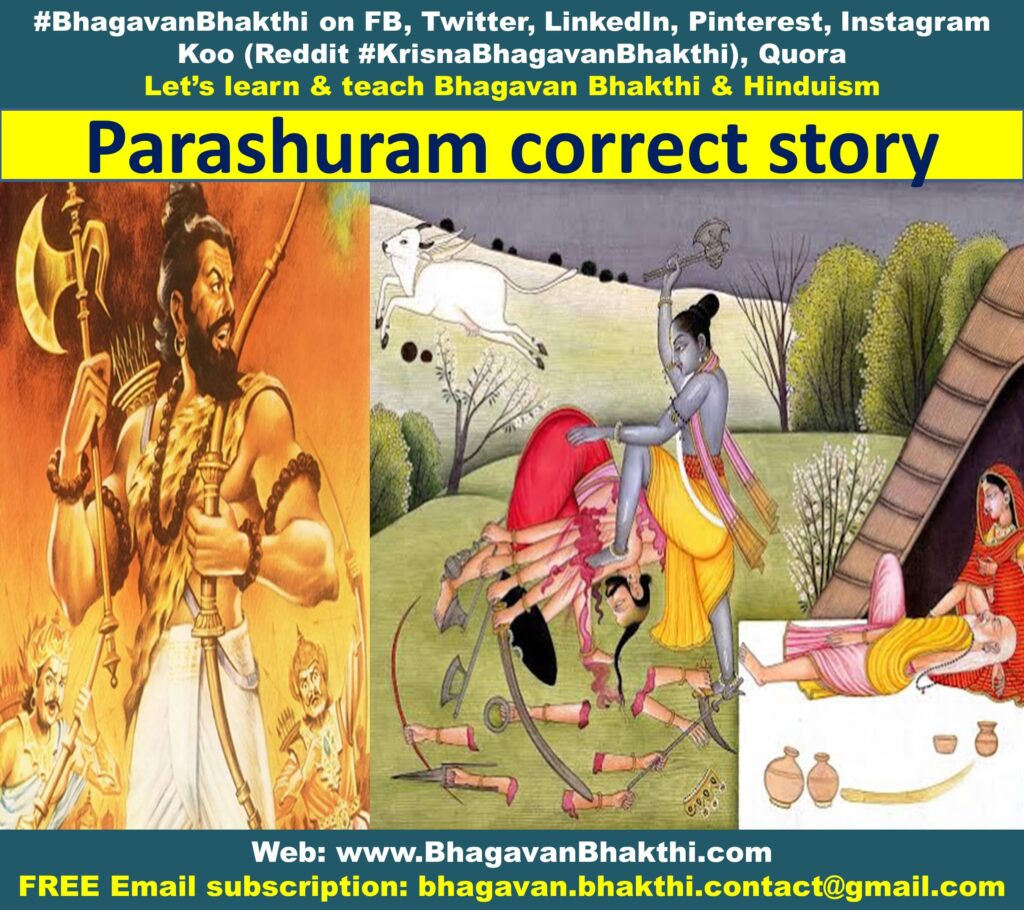 Saying this, Richika went off to meditate in the forest.

But mother and daughter managed to mix up their halves. In the course of his meditations, Richika realized that Satyavati was going to give birth to a brahmana son who would display kshatriya traits.

Through his powers, he managed to postpone this birth by a generation. So Satyavati gave birth to Jamadagni. It was Jamadagni’s son Parashurama who exhibited all the kshatriya like characteristics.

Gadhi’s son was Vishvamitra. Vishvamitra was born a kshatriya. But because of the mixing up of the rice pudding, Vishvamitra turned out to be brahmana-like.

There was a king of the Haihaya dynasty named Arjuna. He had a thousand arms. He had also obtained the boon that flaming fire itself would be perpetually present on the tip of his arrow.

Whenever he shot an arrow, the fire from the tip of the arrow burnt up the target. In this fashion, Arjuna used to burn up villages, cities and forests.

He once burnt up the hermitages of sages. And one of the sages cursed Kartavirya Arjuna that he would be killed by Parashurama.

Parashurama learnt the art of fighting from Shiva himself. While Parashurama was away learning how to fight, Kartavirya Arjuna arrived in Jamadagni’s hermitage.

Jamadagni had a wonderful cow (dhenu), known as a kamadhenu because it produced whatever objects one asked (Kama) from it. Using this kamadhenu, Jamadagni treated Kartavirya Arjuna and his entire retinue to a royal feast. 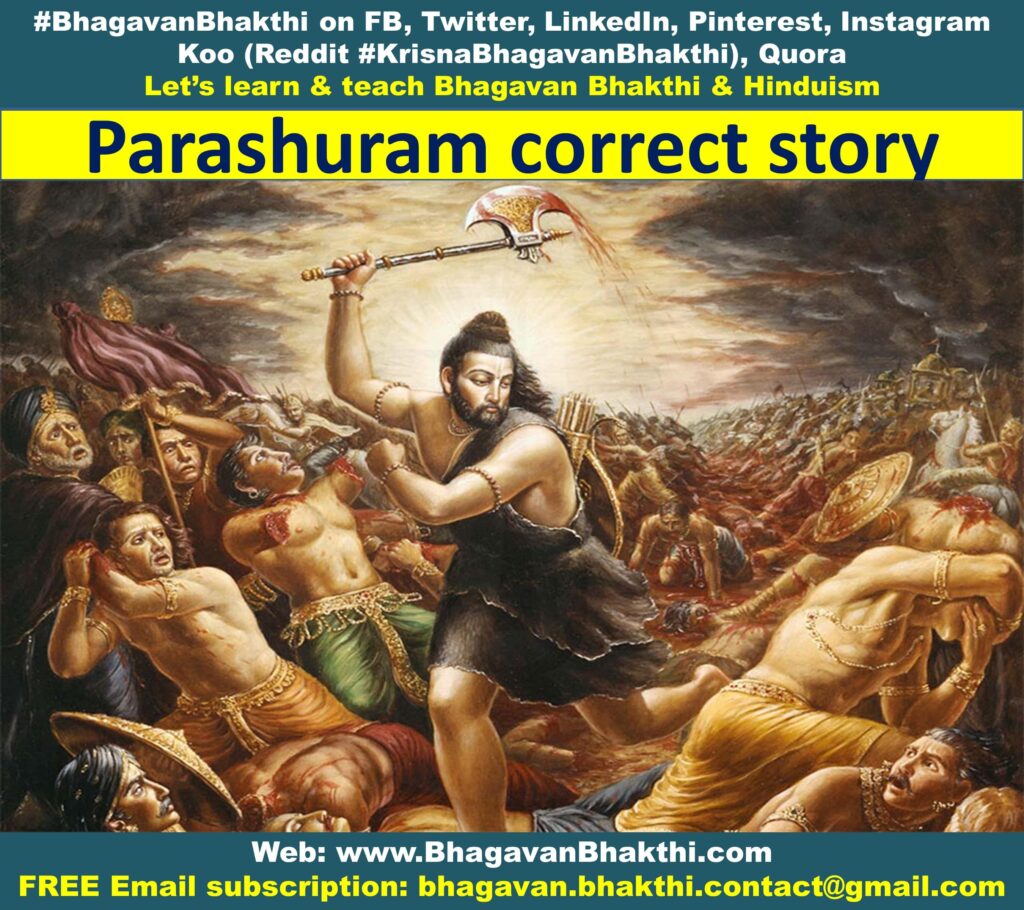 Having disposed of Kartavirya Arjuna, Parashurama went off to meditate and pay another visit to Shiva.

When Parashurama returned, he exacted vengeance for this evil deed. He killed Kartavirya Arjuna’s sons.

Since Kartavirya Arjuna and his sons happened to be kshatriyas, Parashurama also killed all the kshatriyas who don’t do Dharma in the world. He did this not once, but twenty-one times over.

Why twenty-one times? The reason was that there were twenty-one weapon-marks on the dead Jamadagni’s body.

But killing was a crime and Parashurama had committed a sin.

(We should remember that Parashuma is an avatar of Sri Hari and thus Parashurama can’t be a sinner.)

But to show to the world on how one should live, svayam Bhagavan is teaching us the Dharma by participating in the life of journey).

As penance, Parashurama donated cows and performed a lot of tapasya. He also arranged an ashvamedha yajna. All this did not prove to be atonement enough.

To complete the penance, Parashurama sought the advice of the sage Kashyapa. 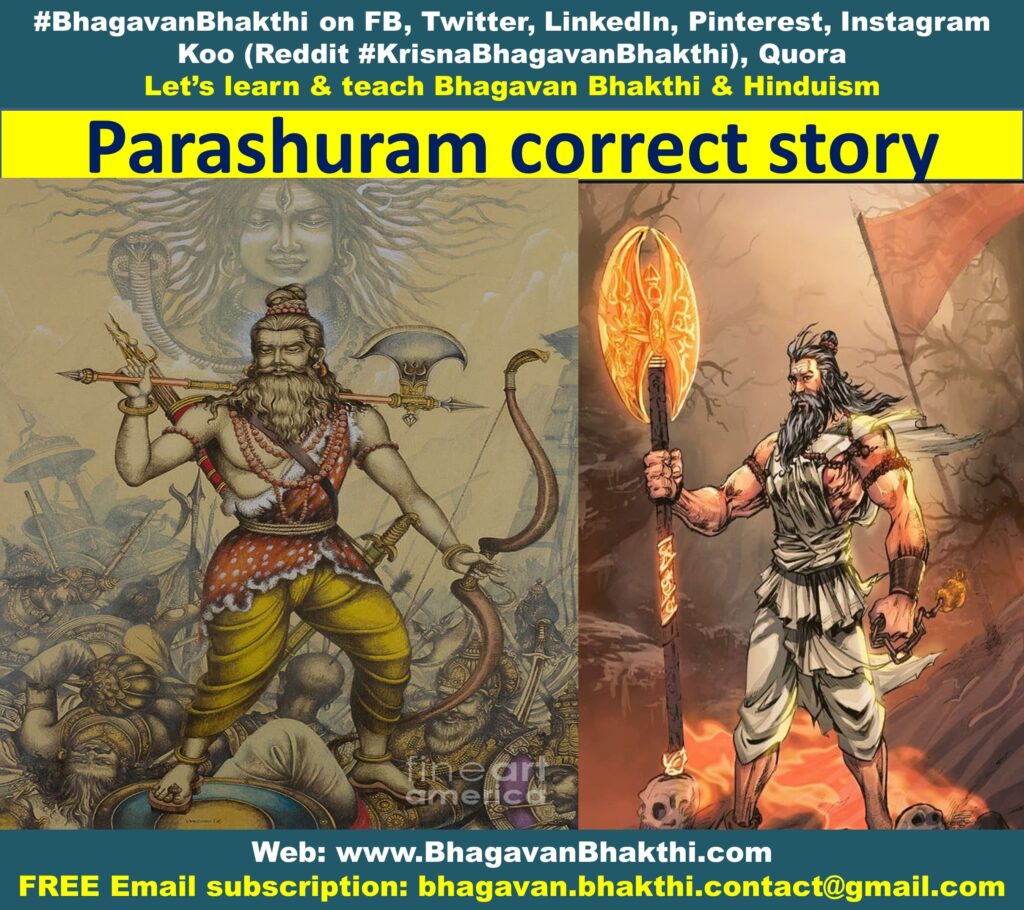 Kashyapa told him to perform the donation that is known as tulapurusha.

A tula (or tuladanda) is a pair of scales. The person (purusha) who is performing the donation is placed on one side of the weighing scale.

On the other side are placed objects like honey, clarified butter, molasses, clothing, gold etc.

Parashurama performed tulapurusha and was freed from his sin (again please remember it is only lessons for humans like us, as Sri Hari can’t be a sinner).

PS: Many people have doubts that, “why didn’t Bhagavan Sri Parashurama killed all the bad Kshatriyas in one time itself and why he took 21 times to kill all those bad Kshatriyas”.

This is where the greatness of our Great Sanatana Dharma is.

Bhagavan and Sanatana Dharma give chance to everybody. If he / she is learning from his / her past mistakes, then it’s great. Otherwise he / she has to pay for it.

Bhagavan Sri Parashurama is so so so Great (The Greatest), he never killed a child / an underage person even though he was big sinner.

But only after they grew older and also giving multiple chances, then only Bhagavan Sri Parashurama killed such types of sinner humans.

Thus Bhagavan Sri Parashurama waited every time and he took 21 times to kill all such types of sinner Kshatriyas.