What is Rama name meaning

The word Rama has unlimited meanings. In that, let us know few of them as per my small knowledge with the aashirvaada / blessings of my Guru and Bhagavan Sri Rama Chandra Prabhu.

What is Rama name meaning – It is as given below:

All Yogis are born from Rama : “The only entity from which all yogis attain bliss”. 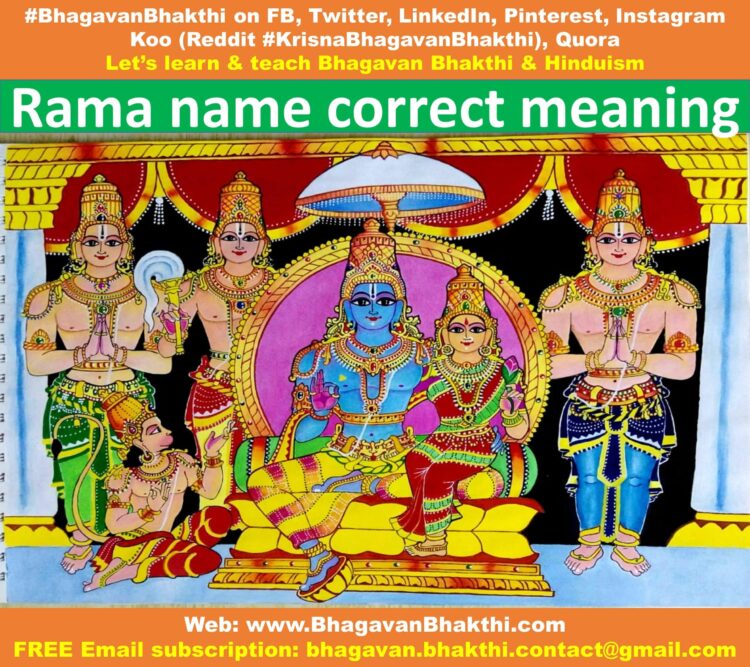 Now, let us take each of the above and let’s know the meaning with explanation:

1. “The only entity from which all yogis attain bliss”.

The adhyatmika / spiritual people do not find real bliss / happiness from the finite and laukika / worldly objects.

The adhyatmika / spiritual and real infinite bliss can only be supplied by our Bhagavan Sri Rama Chandra Prabhu.

We should keep in mind that ‘anandam’ (real bliss) is different and ‘sukham’ is different. ‘Ananda sutram’ says that “Ananta / infinite bliss” is called ‘anandam’ and not ‘sukham’.

If we need real ‘ananta’ / infinite bliss means, we need to keep on chanting the great name of Bhagavan Sri Rama Chandra Prabhu.

2. Bhagavan Sri Rama Chandra Prabhu is the most glowing entity of the unlimited universes.

All glittering and glowing entities get their glowness and glittering ability from our Bhagavan Sri Rama Chandra Prabhu.

All entities are completely dependent on our Bhagavan Sri Rama Chandra Prabhu and no entity possesses glowness or glittering ability on his / her / its own. 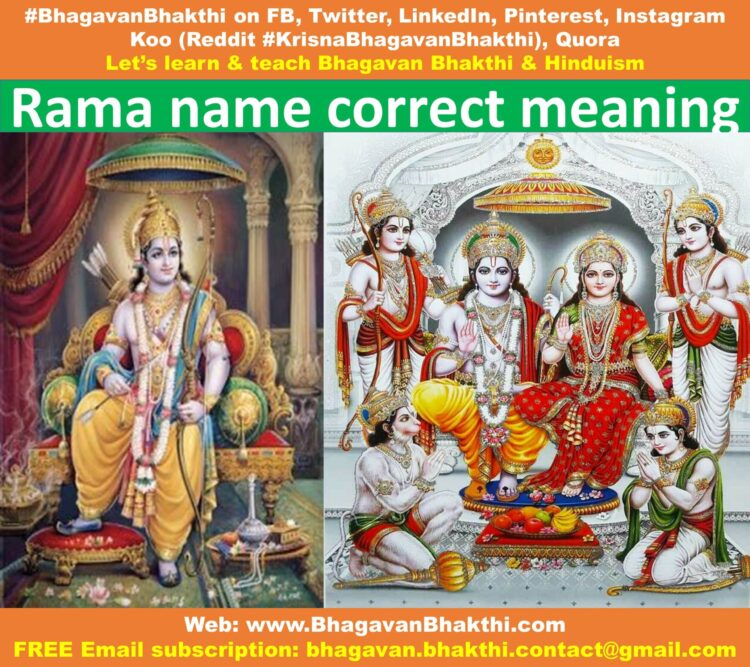 Sri Chandra Deva / Demigod Moon gets his glowness and glittering ability from the ‘bhudevi’ / mother earth.

Sri Surya Deva / Demigod Sun gets his energy from the cosmological nucleus.

Here Bhagavan Sri Rama Chandra Prabhu is the nucleus / centre of all energies, without nothing can exists in these unlimited multiverses.

Our ‘shastras’ / scriptures says “Before the effulgent of Supreme Entity (that is Bhagavan Sri Rama Chandra Prabhu), neither the sun shines, not even the moon shines nor does the stars shines also nor the lightning flash, then what to speak of fire. 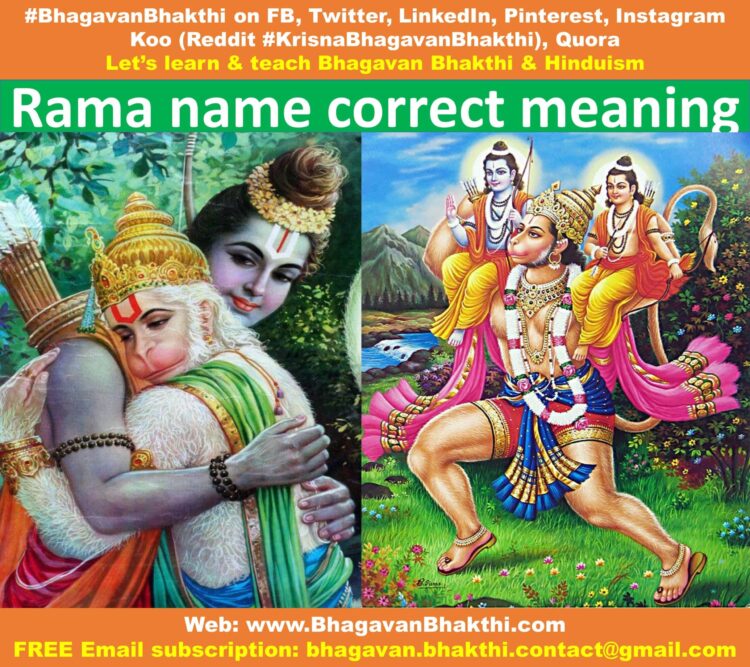 (This is happening since unknown time. Only Bhagavan Sri Rama / Sri Vishnu / Sri Krishna knows about this and no one else.)

‘रावण’ / Ravana means a mind that moves away from the central nucleus drifting away by the centrifugal force, dissipating mental energies in all ‘dasha dishas’ / 10 directions.

Ravana is depicted as having 10 faced rakshasa / demon.

Ravana can only be defeated or destroyed, only when someone takes refuge and shelter under Bhagavan Sri Rama Chandra Prabhu.

Thus, within someone under whom Ravana automatically dies, is Bhagavan Sri “Rama”. 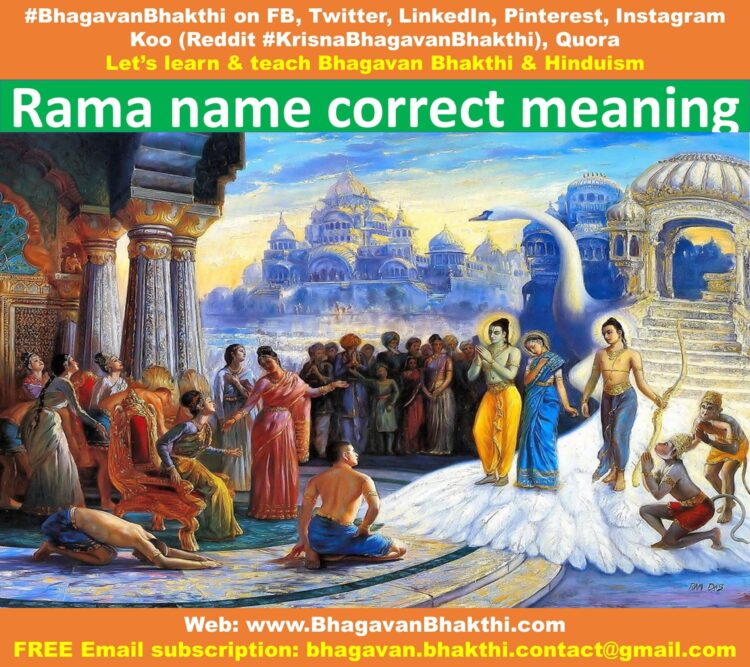 4. Rama and Narayana meaning is the same.

Once Hanuman was asked why he always takes the name of Rama only and not of Narayana?

Hanuman replied: “I know according to darshanika / philosophically, there is no difference between the names Narayana and Rama.”

“But still, I will channelize my mind towards ‘One Entity’ ‘Rama’ with all my sincerity and devotion and not many. For me there is no Narayana, there is only Rama”.

(We should always remember that Sri Vayu Deva took birth as Sri Hanuman and was the greatest bhakta / devotee of Sri Rama Chandra Prabhu.)

(In different avatars, Sri Vayu Deva will be a bhakta of Sri Narayana himself, but with different names. But still all the names of Bhagavan are same.) 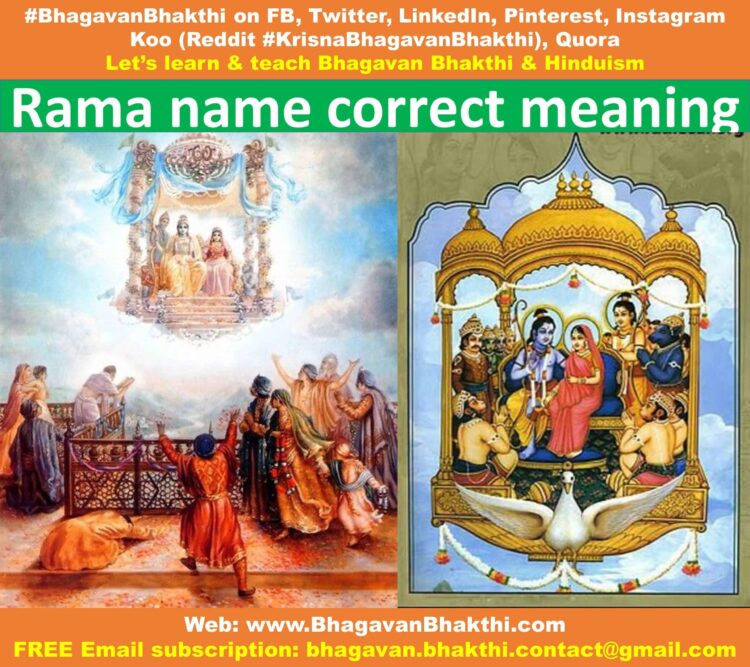 (This is not easy to understand immediately. This requires lots and lots of knowledge and mainly a real bhakta / devotee can understand this).

Again please note that, Narayana and Rama are the same. Only their names’ pronunciations are different and not the meaning.

The word Narayana comes from nara, that has three meanings: Parama, Prakruti and devotion / bhakti.

Narayana means Parama Purusha, that is, the Cosmic Consciousness and refuge of Parama Prakruti.

Who is most powerful ‘naama / name’ or the ‘naami / named one’

Who is most powerful, ‘parama purusha or his naama / name?

The ‘भाव’ / bhava or feeling for an object goes hand in hand with each other and with its name. 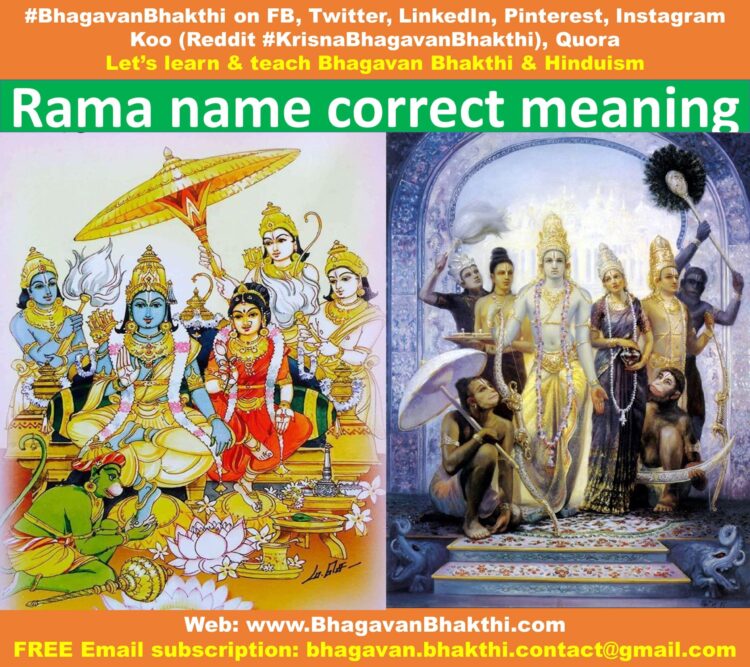 One cannot name oneself (means I can’t name myself. There should be someone who needs to give me a name).

Sri Rama replied, “Go ahead, Hanuman. You can jump across the ocean”.

And Sri Rama asked Hanuman, “How will you cross it?

Hanuman replied, “With the power of the Rama naama smaranam”.

Sri Rama asked, “How will you get my power?”

Hanuman replied, “I will make the smaranam of your naama / name and jump”. 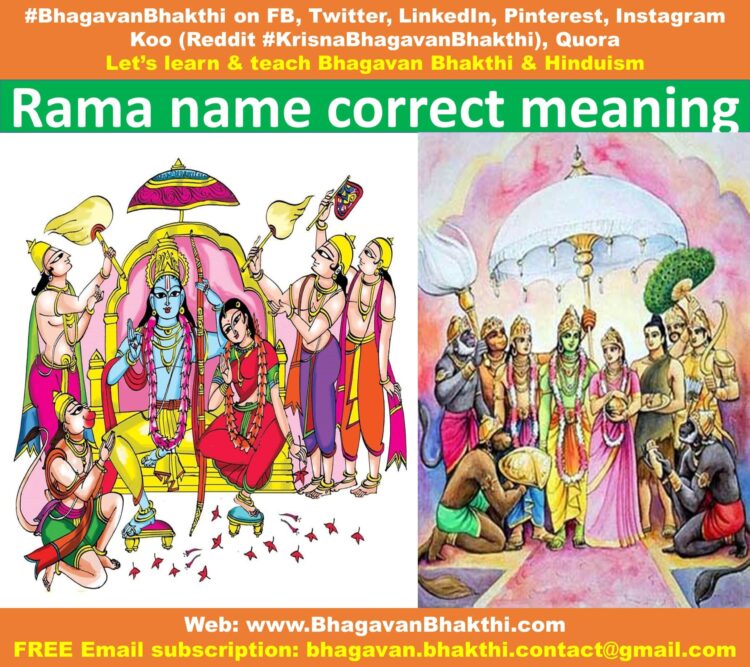 Thus it should be noted that the naama / name and Bhagavan Sri Rama both are same and are equally powerful.

More information will be added, please visit after sometime.

To know the full list of the great and long “Suryavamsha family tree”, click the below link:

To know “What is the real meaning of Ayodhya and it’s greatness”, click the below link:

What is the real meaning of Ayodhya and it’s greatness