There used to be a great Rishi called Rishi Jarva and his wife Sumedara. This couple had a very beautiful putri / daughter called shamika.

When this putri / daughter attains the age of marriage, both Rishi Jarva and Sumedara made marriage with a person called Mandara. This Mandara was the son of Dhaumya Rishi and a student of Koushika Maharshi.

Once this the newly married couple Mandaara and Shamika went for a walk in a vanam / forest. 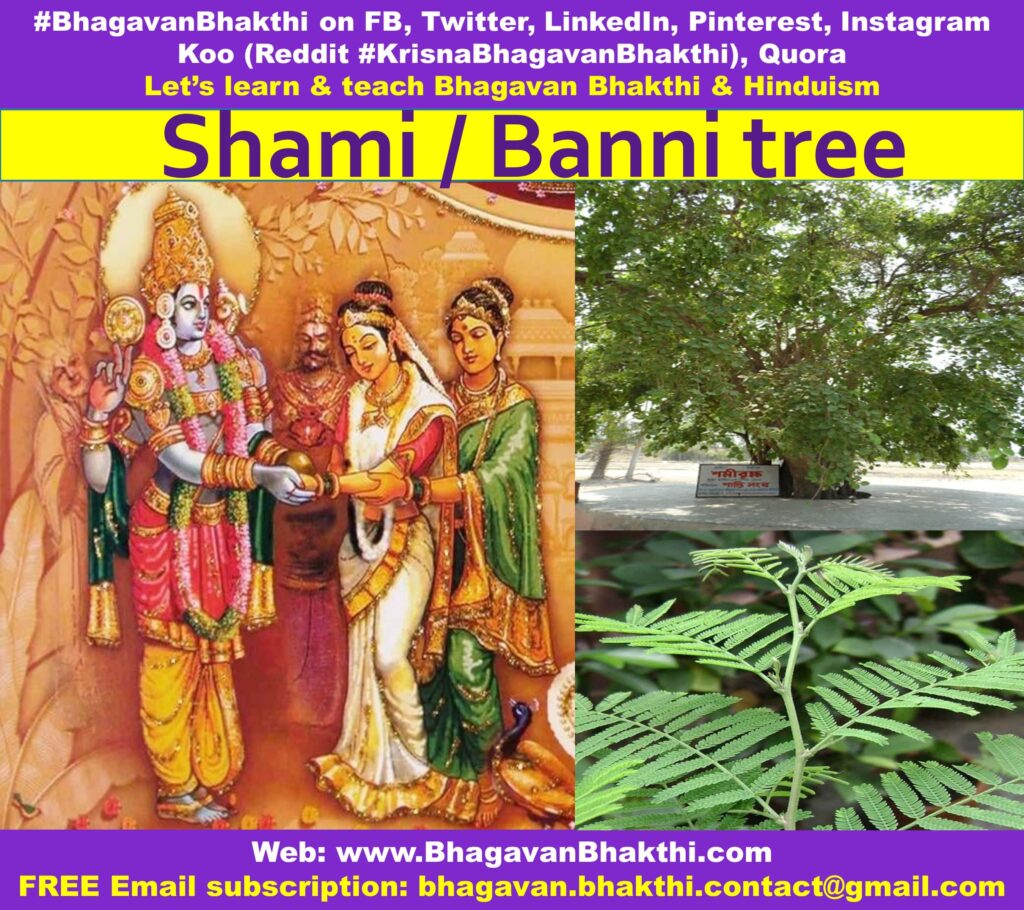 Seeing this Rishi Bhrusudi asked the reason for their laughing. But they both Mandara and Shamika instead of saying the reason they insulted the Rishi by laughing continuously.

In-turn the Rishi Bhrusudi got anger and cast a curse on both Mandara and Shamika that they will become vrukshas / trees which will be of no use for any living creatures.

After this, the couple Mandara and Shamika realized their fault and started to beg for the mercy of the Rishi Bhrusudi.

Thus Rishi Bhrusudi told that when you have darshanam (seeing) of Lord Ganesh, then your curse will finish.

But on the other side, both Rishi Jarva and Sumedara were wait for a long time for their daughter Shamika and son-in-law Mandara to return back.

But after a long time when both Rishi Jarva and Sumedara lost their hope, they went in search of their putri / daughter Shamika and son-in-law Mandara.

Thus knowing everything both Rishi Jarva and Sumedara teached the Maha Ganapati mantra which was told to them by great Maharshi Durvasa.

After knowing the Maha Ganapati mantra both Shamika and Mandara both of them started chanting the mantra with great bhakti / devotion.

Later after a long time, one day Lord Ganesha / Ganapati gave darshan to both Shamika and Mandara and they were freed from there curse.

Uses of chanting mantras under the Shami vruskha / tree

1. If we dig well near this Shami vruksha / tree, then definitely we can get sweet water in that well.

2. If someone meditates a mantra for an hour or even half an hour under Shami vruksha / tree, long timed diseases will be cured.

3. Keeping leaves of Shami vruksha / tree in house will give relief from vaastu dosha / problems.

4. Heart problems can be cured by inhaling air of this vruksha / tree.

5. One who is childless, they are advised to make pradakshina / circumambulation in the clockwise direction under this Shami / vruksha tree in early morning to begot child.

6. Offering Pooja / worshipping Shami vruksha / tree for 21 days will give relief from any Black magic.

7. Doing pradakshina / circumambulation around this Shami vruksha / tree for 48 days (48 days in total becomes one whole mandala / full cycle) is recommended for unmarried people to get marriage arranged.

8. Tonic made up of wood of this Shami vruksha / tree will cure diseases like asthama, bronchitis, dysentery, loco derma, piles etc.

9. Shami is helpful for pregnant woman to prevent any miscarriage. 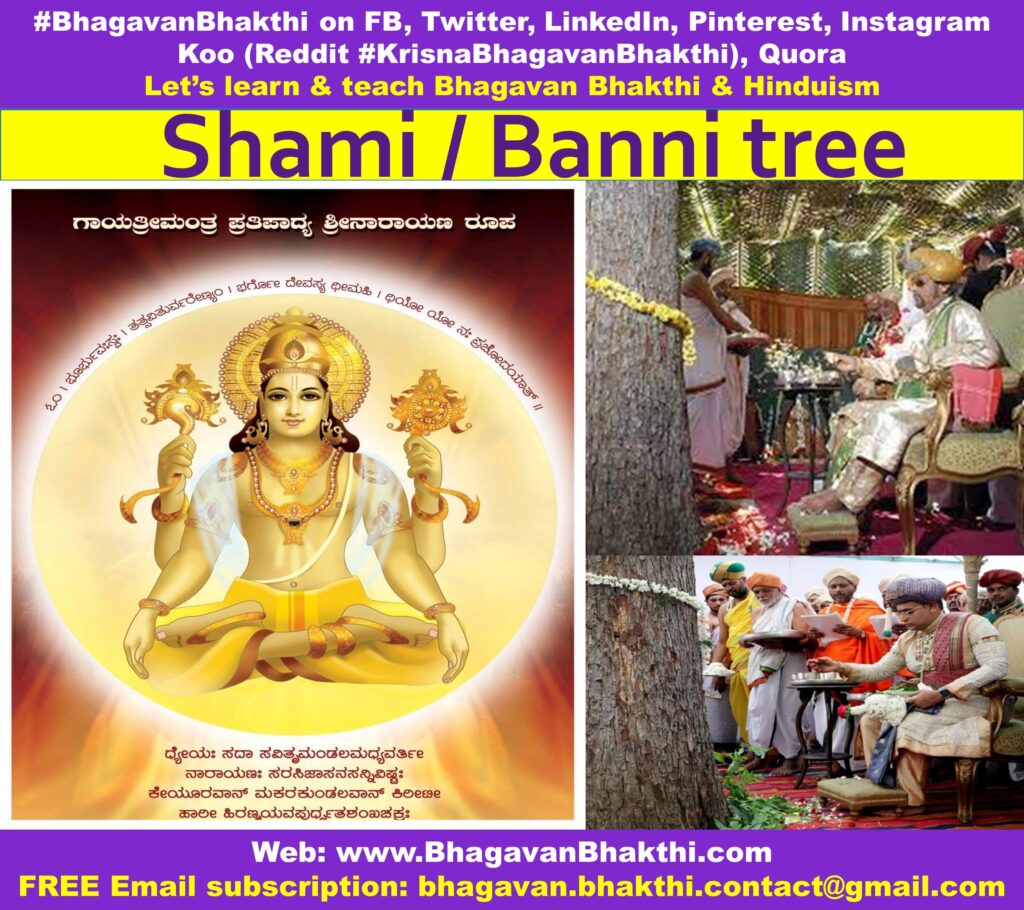 Even today the Mysuru Wodeyar do the pooja of Shami tree / banni tree during the Navatrati time.

Why should we worship Shami vruksha / tree 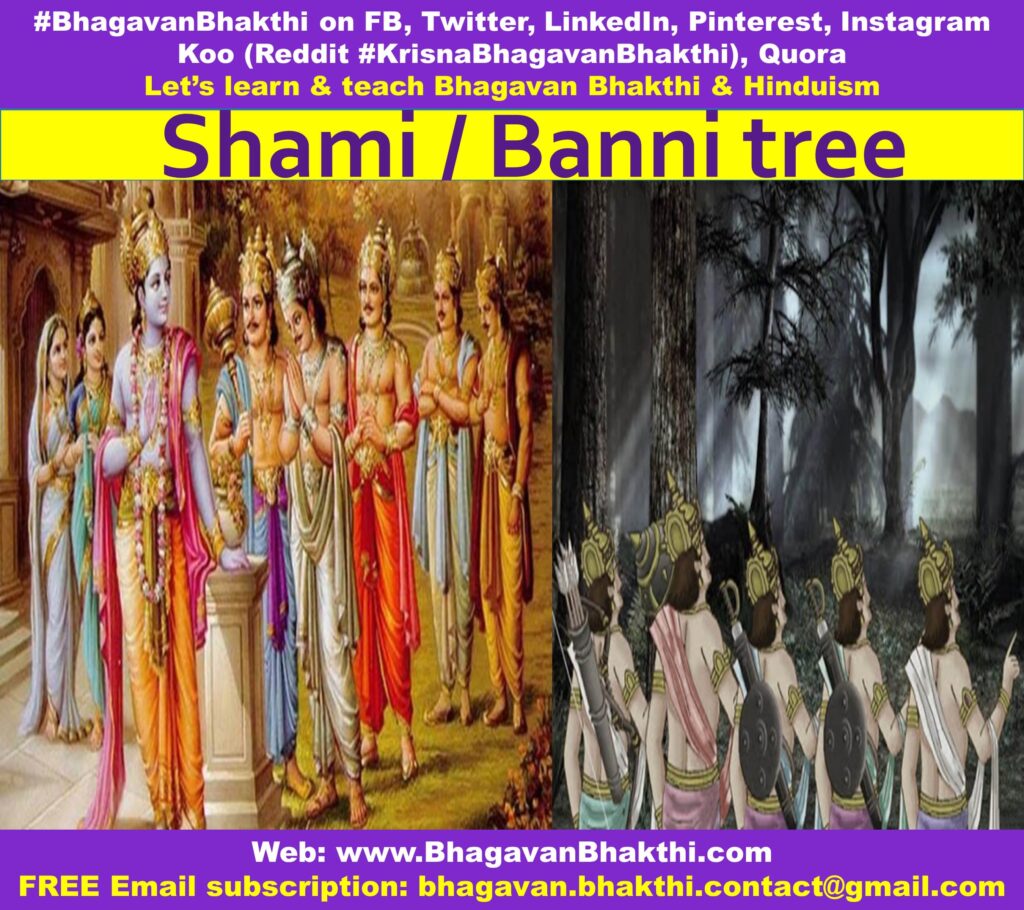 To know this answer we need to know story that comes in the Great Epic of Mahabharata.

We all know that, Great Pancha Pandavas lost to the Kauravas in the game of dice and thus Pancha Pandavas along with Draupadi Devi were told to leave both Hastinapura and Indraprasta and were told to live in a forest for 12 years and then remain incognito for one year (that is in the 13th year of exile).

Thus Pancha Pandavas along with Draupadi Devi after completing 12 years of exile, they decided to remain incognito in the raajyam / kingdom of Raja Virata, by disguising themselves for the next one whole year.

Before approaching the Raja Virata, Pancha Pandavas and Draupadi Devi wrapped up their daivi / divine astras and shastras (weapons) in a huge cloth and kept it on a high branch of a Shami tree near the cremation ground outside the city of the Raja Virata.

Mahabharata says that, it was on the day of ‘Vijaya Dashami’ (the day after the Navaratri) that they successfully completed their one whole year of incognito life.

Also we all know that the mid Pandava Arjuna collected the astras and shastras (weapons) from the Shami tree and defeated the Kauravas who attempted to steal the cattles of the Raja Virata.

Thus from that day, Shami tree and astras and shastras (weapons) have been worshiped on the ninth day of Navaratri (that is on Ayudha Pooja day – a day before ‘Vijaya Dashami’) symbolising this particular incident in the Great Epic of Mahabharata.

Also from that day all the Pancha Pandavas and Draupadi Devi started worshipping the Shami vruksha / tree as their ‘kuladevata’ / ‘Family God’. 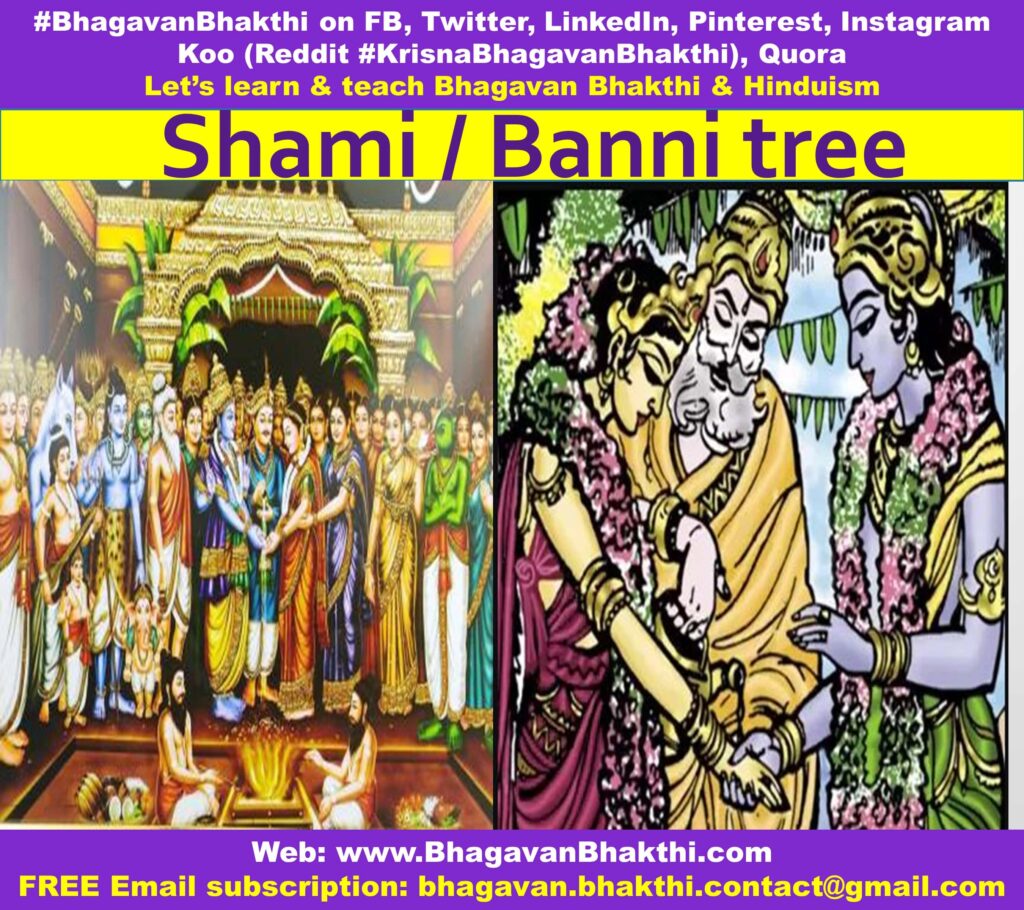 This story starts when the vivaha mahotsava / marriage ceremony of Bhagavan Sri Srinivasa with Sri Padmavati Devi was going on. At that time the Great Maharshi was the poojari / priest of that mahotsava / ceremony:

Maharshi Vashistha asked Bhagavan Sri Srinivasa as to who is your Kuladevata is? as he has to do the sthapana of Kuladevata.

For this Bhagavan Sri Srinivasa told that his kuladevata for him as well as for Pandavaas is “Shami”.

(“Shami” was the kuladevata for Paandavaas and even Bhagavan Sri Srinivasa also told that it is his kuladevata is also “Shami”.)

“Shami Tree destroys our sins, it also destroys our enemies. It was holding the Dhanush (bow) of Arjuna for one full year and it is Bhagavan Sri Rama Chandra Prabhu’s most favorite tree.”

Maharshi Vashistha did the sthapana of Shami branch in the place of which belongs to Bhagavan Sri Srinivasa (that is near Bhagavan Sri Varaha Svami’s sannidhana).

Thus, Bhagavan Sri Varaha Svami replied that he is busy with the crop season and as such he is sending Sri Bakula Devi (Bhagavan Sri Srinivasa’s mother) as his representative.

Bhagavan Sri Srinivasa did the pratista (appreciation) of Shami vruksha in the sannidhi of Bhagavan Sri Varaha Svami.

Bhagavan Sri Srinivasa called Sri Chatur Mukha Brahma Deva and instructed him to send all the people to Narayanapura.

Thus, Sri Chatur Mukha Brahma Deva replied that after doing the Kuladevata pratistaana and Naandi samaaraadhana, one must arrange for Brahmana samaaraadhana and get their blessings. As such, without doing bhojana, when everybody is hungry it is improper to move from here.

For this Bhagavan Sri Srinivasa replied like this: “I don’t have any money with me and when I came from Vaikuntta, I have not brought anything with me. I have already spent nearly 10,000 years here with extreme difficulties in this place. Thus, it is not possible for me to arrange for bhojana for all now”.

Whereas Sri Rudra Deva said like this: “If someone is having money, then at least one must borrow money and do should do all the required arrangements”.

After all these discussion Runa / Loan agreement was signed by svayam Bagavan Sri Srinivasa himself on Vilambi naama samvatsara, Vasanta Rutu, Vaishaka maasa, Shukla saptami: The loan amount was 14 laksha Raama Tankee varahas. This has to be returned with interest + principal interest.

This total amount has to be repaid (with interest and principal interest) by Bhagavan Sri Srinivasa to Kubera before the end Kaliyuga (that is before 100 years of the end of Kaliyuga).

More information will be added, please visit after sometime.