One night, Shri Rama Chandra Murthy was taking rest. He put His head on His Parama-mitra (great friend) Sugriva’s lap.

Bhakta / Devotee Hanuman and Angada were doing Paramatma Paada-seva (Serving Sri Rama’s lotus feet). Lakshmana was arranging the aayudhams (weapons) and guarding everyone.
Sri Rama’s drushti (noticed) was caught by the beautiful Pournami-Chandra (Full Moon). He saw Chandra and said “can anyone of you explain the dark regions in Chandra”. 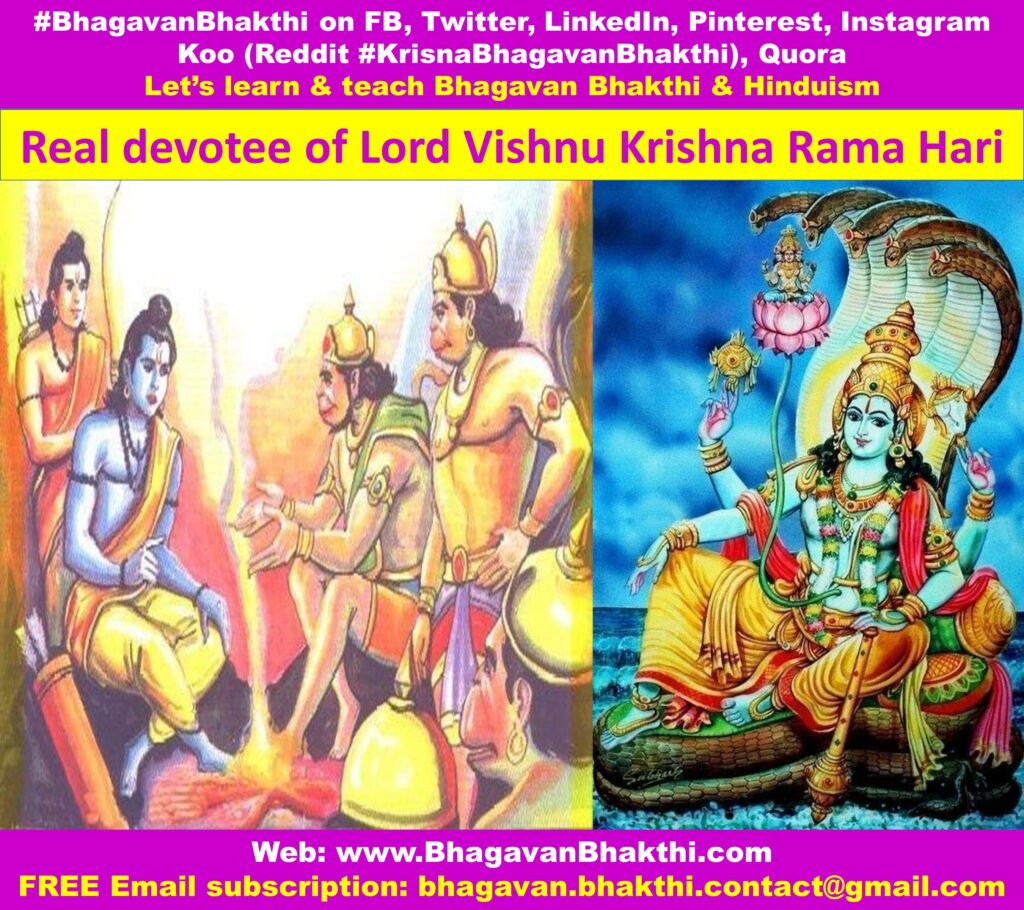 Everyone gave their explanations. They proved their arguments also.

“Hence Chandra is able to give Amritam (Ambrosia) and Aushadhas (Divine medicines) to the worlds. This explains the dark region (because Sri Rama is Neela-megha-shyama)”.

A Bhakta (devotee) also sees Paramatma (God) in everything, like Hanuman saw in Chandra.

Now let us understand about the 35 gunas / qualities of nija / real bhakta:

According to the Sri Bhagavad Gita, there are a total of 35-Gunas or qualities which a real Bhakta (devotee) is expected to have, by virtue of which he could ascend the Path of Bhakti-Yoga to realize Sri Hari / Bhagavan; they are as given below: 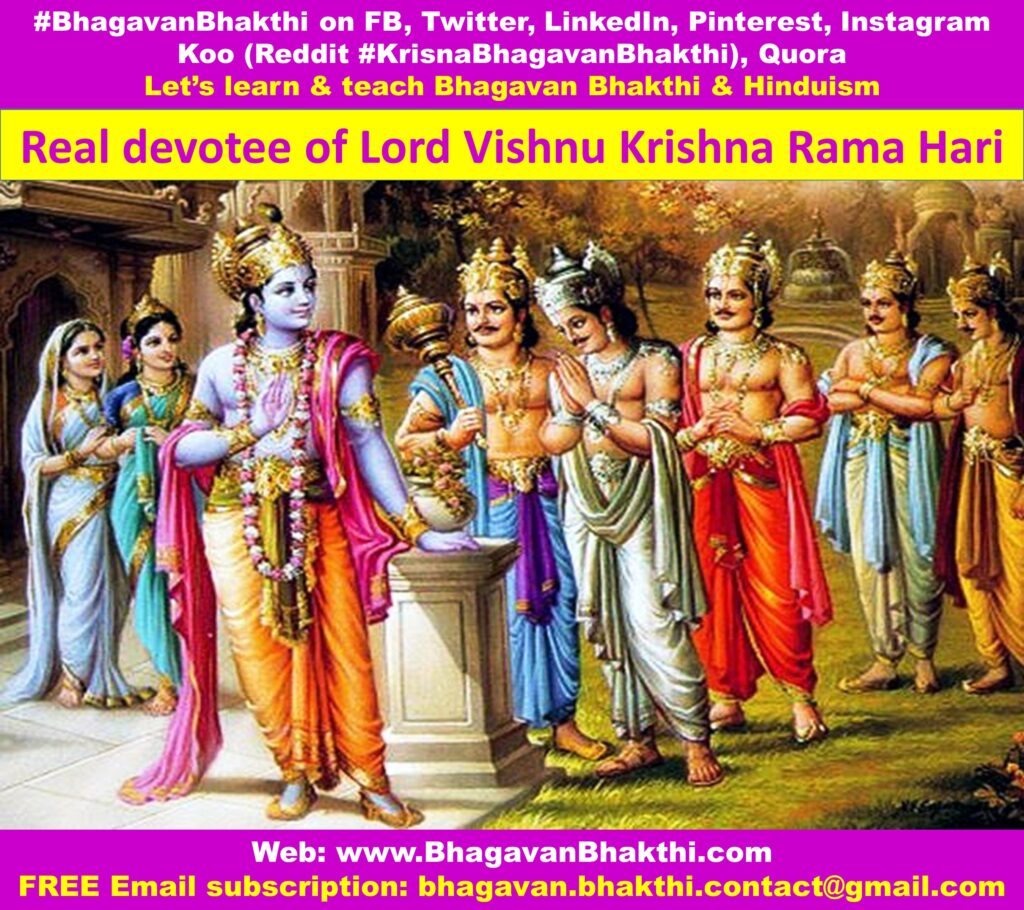 1. KRIPALU: This is that great quality of a Bhakta, that a real Bhakta of Sri Hari has to be very merciful and kind to everyone, irrespective of the circumstances, place, varna, gender, etc.

2. AKRITA-RODHA: This quality emphasizes the ability of a Bhakta to remain serene at all times and restrain from indulging in quarrels with anyone.

3. SATYA-SARAHA: This is a quality of a Bhakta to be truthful and be fixed on Absolute Truth at all the time.

4. SAMA: Irrespective of all the adversities in life, a Bhakta considers everyone to be equal.

5. NIRDOSA: A Bhakta remains faultless in his code of conduct at any situation and time.

6. VADANYA: This is a quality of a Bhakta to remain magnanimous and forgiving at all time.

7. MRITYU: A Bhakta always remains composed even at the point of rejection or humiliation.

8. SUCHI: Always submerged in God-consciousness, Bhakta remains clean at heart, body and mind at all time, never indulging in ill-will. 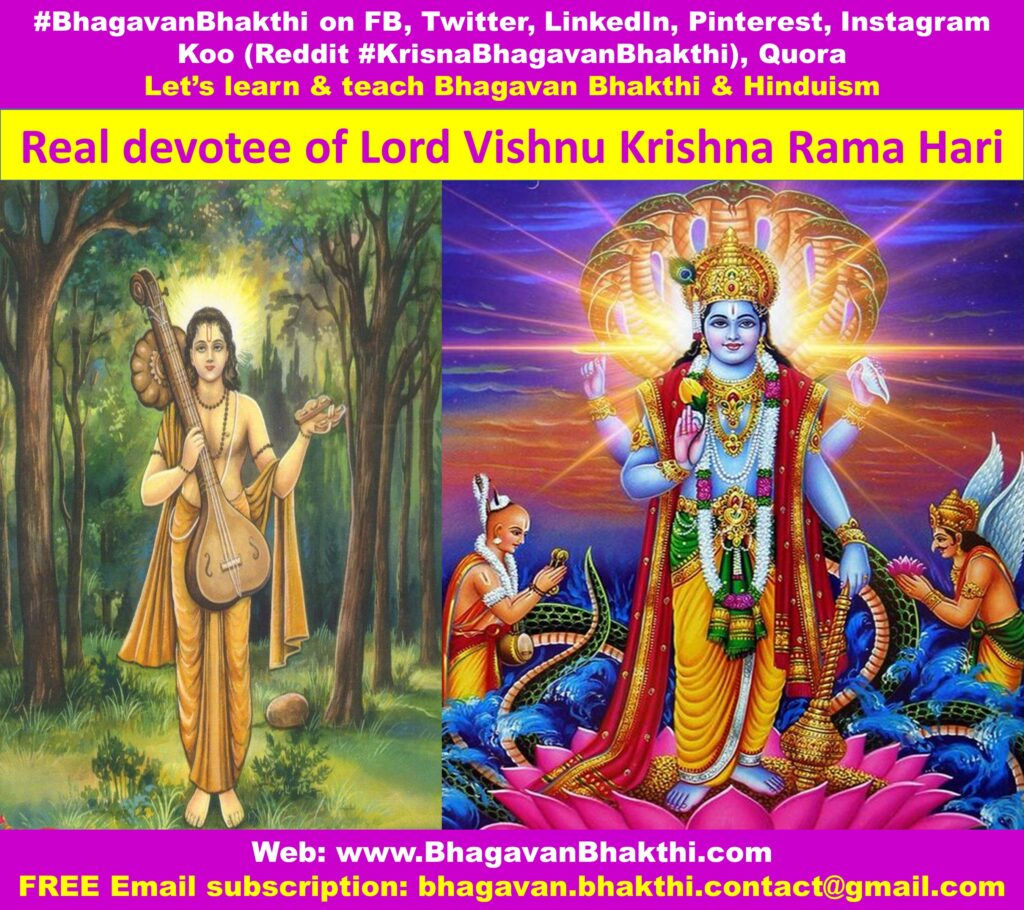 9. AKINCHANA: A Bhakta leads a clean and simple life without material possessions, considering everything to be God’s property.

11. SANTA: A true Bhakta remains peaceful at any point of time.

12. KRISHNAIKA SARANA: A Bhakta completely and unconditionally surrenders to the will of God and works for the welfare of others.

13. AKAAMA: A true Bhakta is desire-less in nature, without material hankering.

14. ANIHA: Forever in the service of God, a Bhakta remains modest and is indifferent towards material acquisitions or attainments.

15. ESTHIRA: A true Bhakta remains steady and  fixed in Divine purpose inspire of any hurdles.

16. VIJITASAD GUNA: A Bhakta is always self-controlled never giving in to temptations, such as lust, anger, greed, illusion, madness and envy.

17. MNO ITAVUK: A Bhakta does not indulge in excess of anything; never eats more than required and lives moderately. 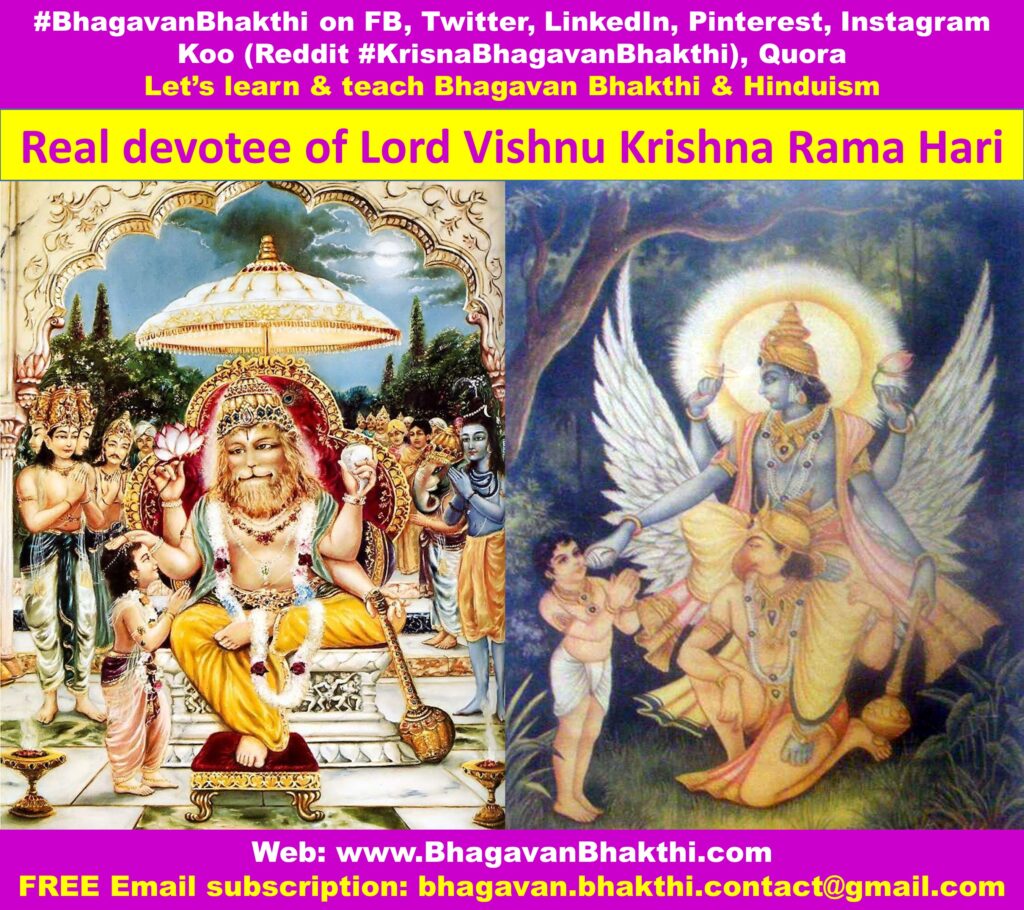 18. APRA MATTA: A true Bhakta always maintains a sane mind and a healthy body fit for the service of God.

19. MANADA: A true Bhakta  is always respectful, kind and polite to all without expecting anything in return.

20. AMANI: Despite all the success and accolades, a Bhakta remains forever humble, free from all false notions of prestige.

21. GAMBHIRA: A Bhakta is always remains composed, grave and solemn in praise of God.

22. KARUNA: A Bhakta is always compassionate towards every being as well as being grateful for all that has been bestowed upon him.

23. MAITRA: While graveling the path of devotion, a Bhakta is always friendly towards all being.

24. KAVI: A Bhakta ever poetic in his prayers glorifying the Lord and His mercy.

25. DAKSHA: A Bhakta dispenses all his divine duties to the best of his ability, in that light he is an expert in the service of God.

26. MAUNI: Always absorbed in God-consciousness, a Bhakta remains silent all the time unless otherwise required. 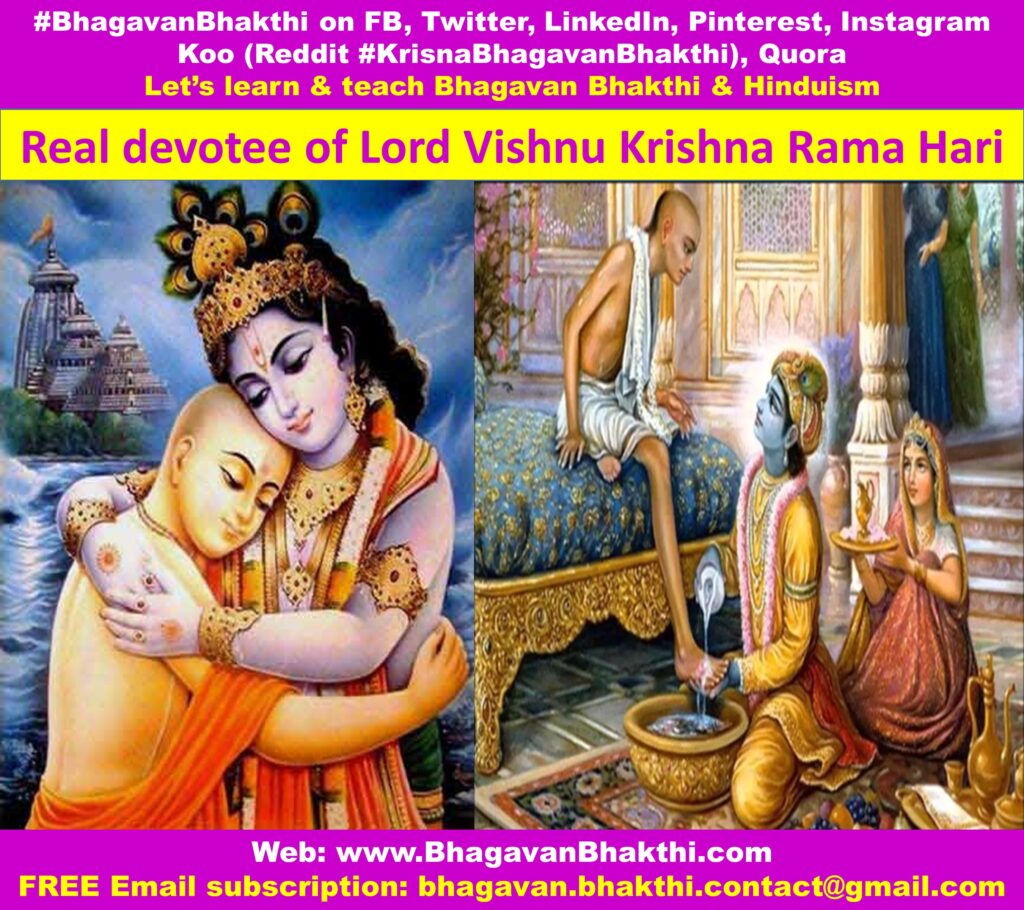 27. NIRMAMAHA: As a Bhakta has no sense of ownership or doer-ship he also has no attachment towards anything and as such does not suffer from any bondage.

28. NIRAHAMKARA: Due to the sense of Nirmamaha, a Bhakta never suffers from a sense of Ego.

29. SAMA DUKHA-SUKHA: A Bhakta does not have a sense of attachment and hence does not suffer from ego; therefore he is same to sorrow and joy of life.

30. KSHAMA: Always absorbed in divine thoughts, a Bhakta considers all beings as equal and just, therefore forgive-full to all.

31. SANTUSHTAHA SATATAM: As a Bhakta is indifferent to any sense of joy and sorrow, he remains forever absorbed in prayers and hence is always totally satisfied.

32. YOGI: A Bhakta is also a Yogi who is forever submerged in his subtle-intellect and contemplation.

33. YATAMA: A true Bhakta is a very self-assured person and hence exercises immense self-control in his pursuit of God realization.

34. GRIHANICHAYA: A Bhakta exercises a firm-resolve as he follows the path of devotion with single-minded determination of God-realization.

35. KRISHNA-PARAYANA-H: The ultimate quality of a Bhakta is to move forward to Krishna-consciousness or God-realization with utmost dedication and devotion, considering it as his Supreme-goal.

To know more about our dear and mighty Hanuman, you can visit the below link: