What are Lord Dhanvantari amazing facts

Bhagavan Sri Dhanvantari is an avatar of Bhagavan Sri Vishnu and he is the physician of the unlimited universes.

Bhagavan Sri Dhanvantari, during the Samudra manthanam came out of the ‘Kshirasagaram’ (Ocean of divine Milk) with the nectar of immortality.

In every household of India, it is an usual practice to pray to Dhanvantari and seek his blessings for sound health for themselves and their family members. 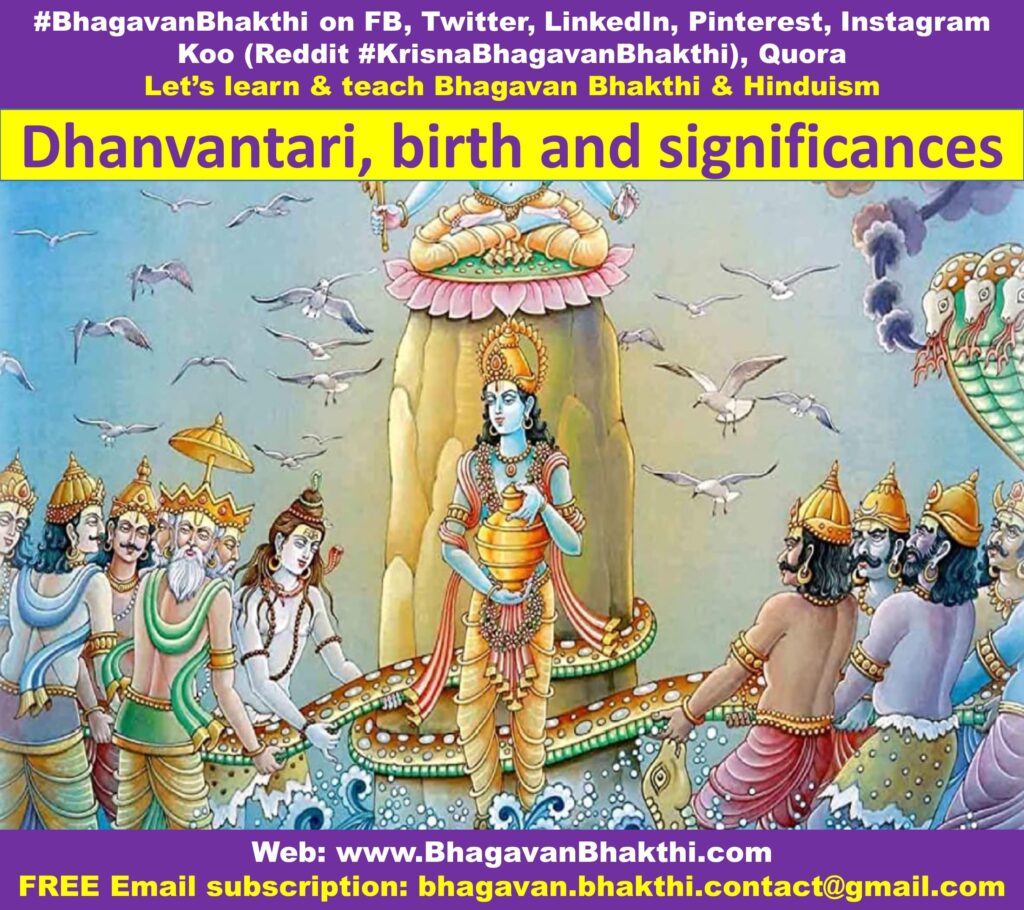 This praying is done especially on Dhanteras or ‘Dhanvantari Trayodashi’ (It is the day when Bhagavan Sri Vishnu took the avatar of Bhagavan Sri Dhanvantari). This is celebrated as the “National Ayurveda Day” in India.

First of all let us know the meaning of the word Dhanvantari:

As said in the ‘Sushruta Samhita’, etymologically the word Dhanvantari means,

that is, doing Surgery.

Thus, Dhanu + Anta = Dhanvanta = even having the complete (up to end) knowledge of surgery.

Dhanvanta + ri = Dhanvantari the one who has the complete knowledge (that is, up to end / full knowledge) of Surgery. 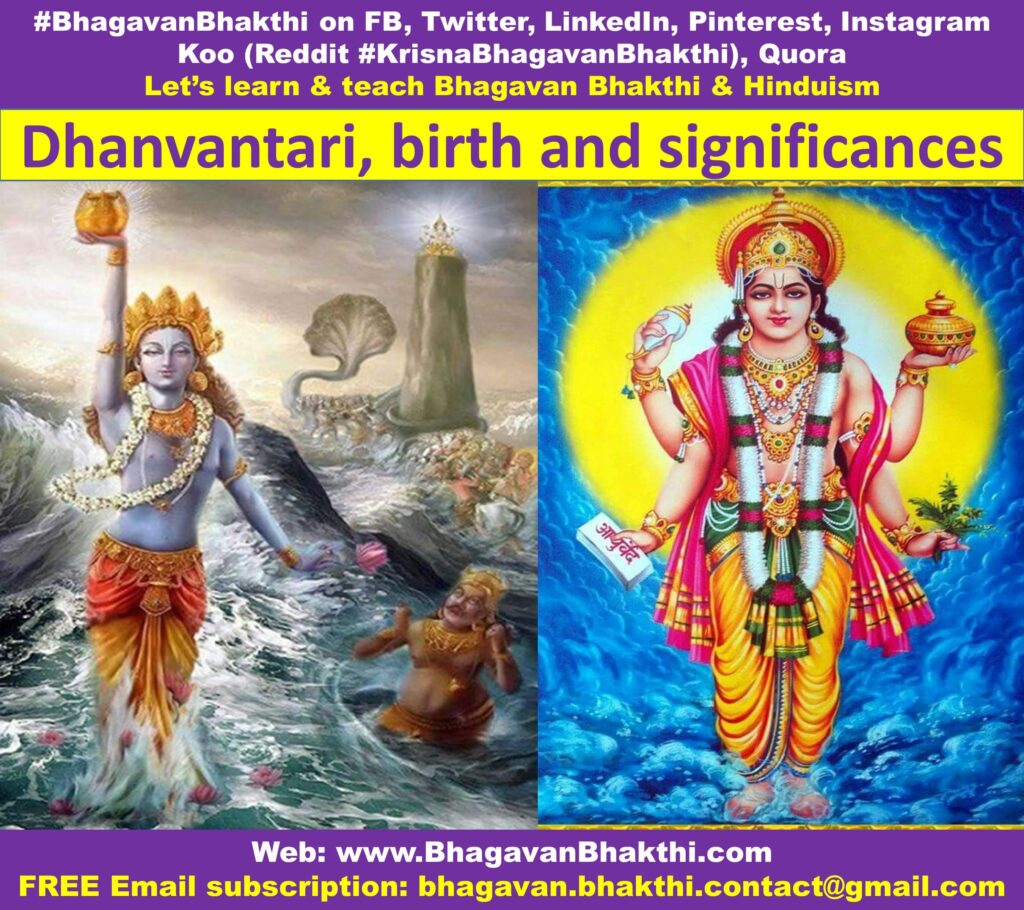 Dhanvantari is one of the avatars of Bhagavan Sri Maha Vishnu. Now let us know who is Dhanvantari?

We learn about Dhanvantari in several Puranas, that is, Bhagavata Purana, HariVamsha Purana, Brahma Purana and others.

In the Chakshusha Manvantara, Bhagavan Sri Maha Vishnu was born in Chandra Vamsha / family as putra / son of Kaashi Raaja by name ‘Dhanva’ and hence he is called as ‘Dhanvantari, that is, the Aayurveda Pravartaka (Physician of the Devatas / Demigods). 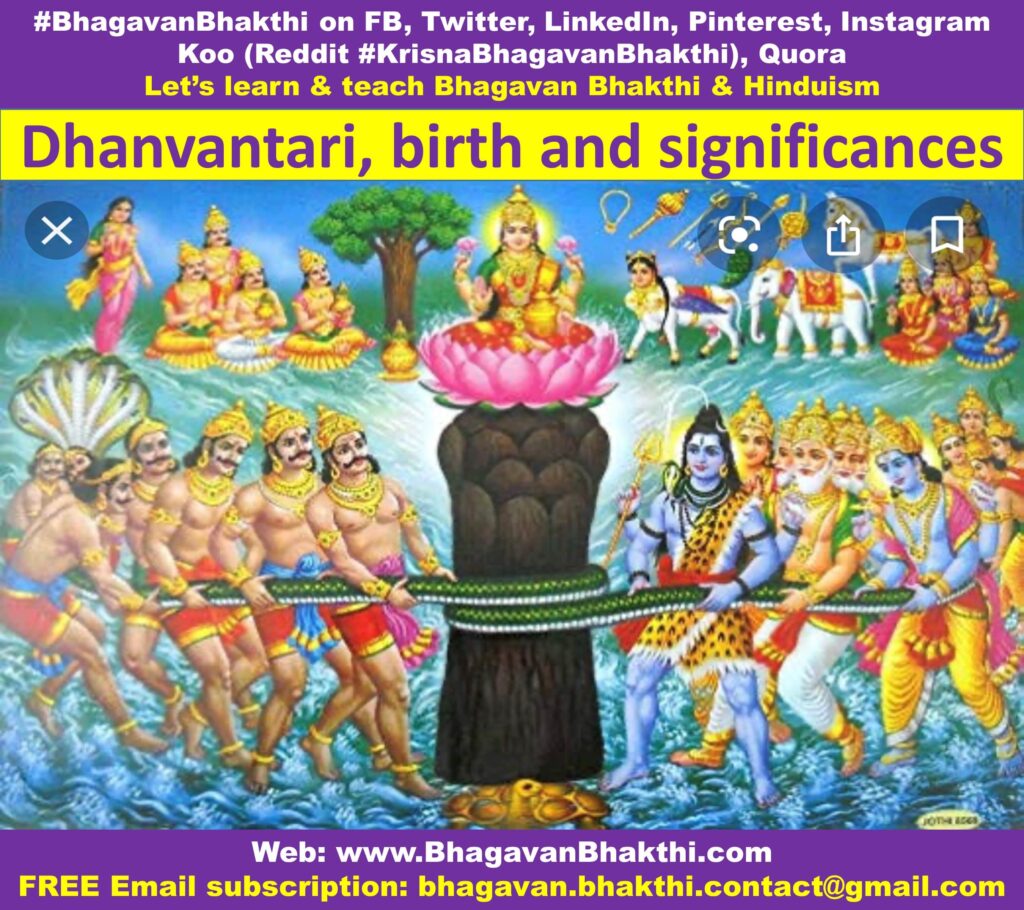 Dhanvantari is the head of all the doctors of the multiverses (unlimited universes).

Dhanvantari is the best of the best Surgeons of the multiverses (unlimited universes).

Dhanvantari is the Sarvottama / Supreme Bhagavan of ayurveda / medicines.

This means, the one who knows about everything about the ayurveda (medicines). There is nothing which is unknown to Dhanvantari.

In Vishnu Sahasranama Stotram, Bhagavan is Sri Maha Vishnu (Dhanvantari form) is called ‘BhavaRoga Vaidya’, he is the called as:

This means, Bhagavan Dhanvantari is the one and the only ayurvedic /  medicinal doctor for the disease called SaMsara (BhavaRoga) and he is the head of the doctors, that is,

he is the ‘daivi vidya / divine doctor’ who can give the ultimate medicine, cure, remedy for all diseases of both physical or mental. 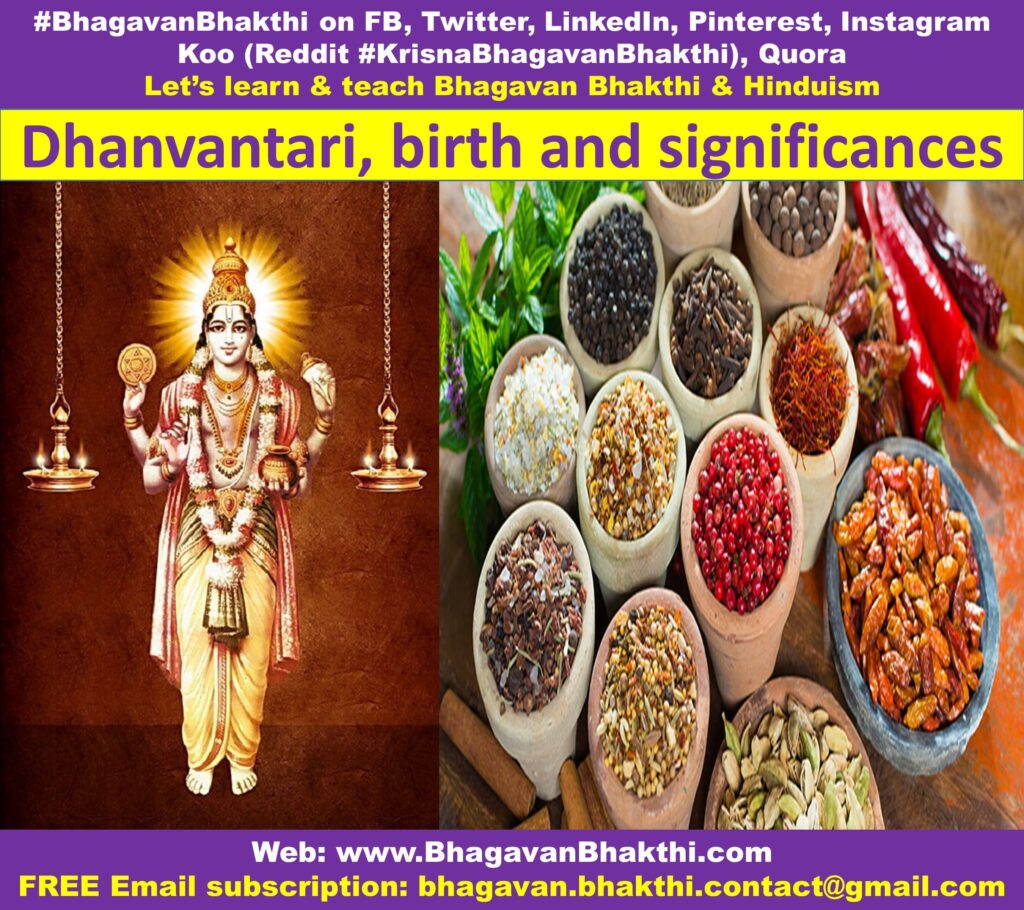 Meaning of this shloka is:

“Namaste / salutations to Aadi Deva Dhanvantari. You are served by all Devatas / Demigods and demons. You are the cause to end all the diseases of this multiverses (unlimited universes). You provide us all types of aushadi / medicines to cure all types of diseases.”

The meaning of this shloka is:

“When someone’s body is suffering with any disease, aushadi / medicine is like sacred Ganga water and the Vaidya / doctor is none other than the Supreme Bhagavan Srimann Narayana and he himself is the Bhagavan Dhanvanthri.”

Above shloka is generally recited while taking medicine. 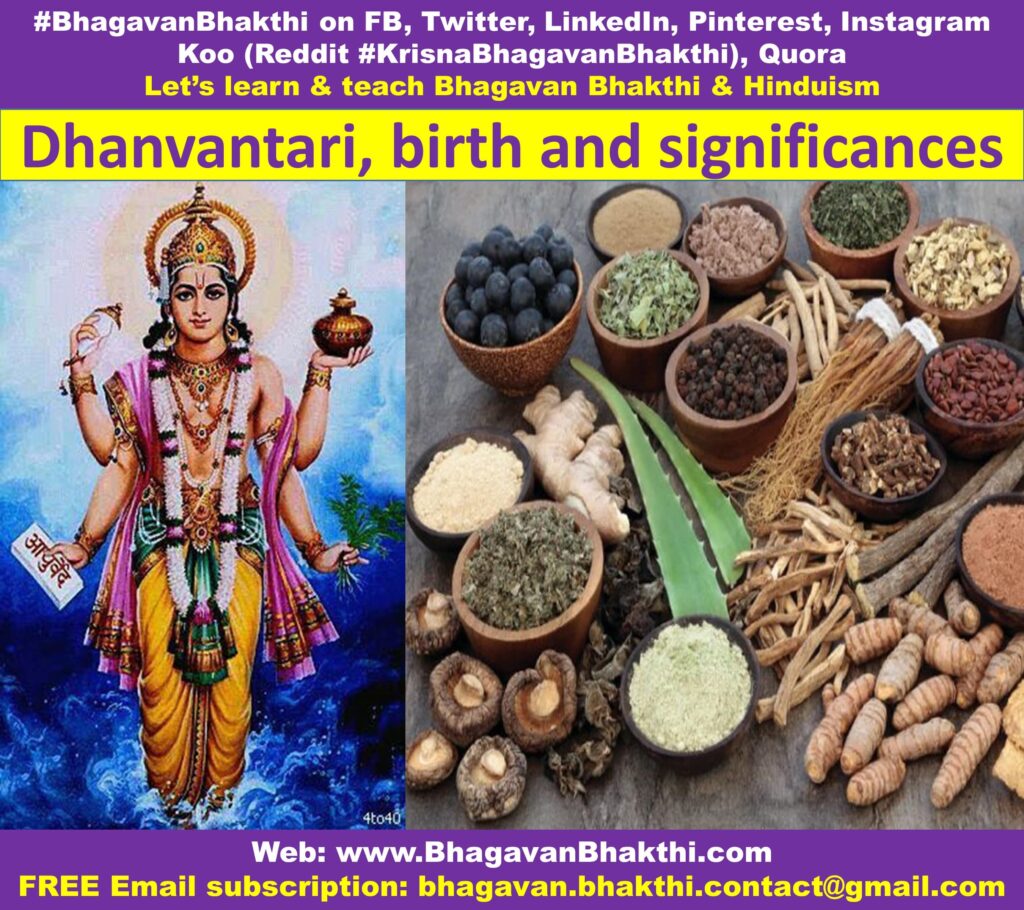 The above shloka comes in the ‘Phala Stuti’ of Sri Vishnu Sahasranama Stotram.

Here the Sarvottama / Supreme Bhagavan Sri Maha Vishnu Himself is giving an assurance that:

Whenever one is too much worried, very sad, heart broken, afraid, severely ill, is been hearing bad news etc.

In all such cases He (Bhagavan Sri Maha Vishnu / Dhanvantari) will take care of everything those who chant the divine name, that is, ‘Narayana’ name, and he is none other than ‘Dhanvantari’ himself.

Festival: Kartika Bahula Trayodashi is the day, when Bhagavan Sri Maha Vishnu was born as ‘Dhanvantari’ and this day is celebrated as ‘Dhanvantari Jayanti’.

Bhagavan Dhanvantari is the abhimani (controller) Devata for Aayurveda Shastra.

Another meaning of Dhanvantari:

Antari means, he is someone who ends all these disease, anger, arrogance, pride etc.

More information will added to this post. Please visit after some time.