To know the list of Purana names with meaning, you can visit the below link:

Bhagavan Sri Veda Vyasa Ji (he is an avatar of Bhagavan Sri Vishnu) has played a significant role in the field of Vedic and spiritual literature. 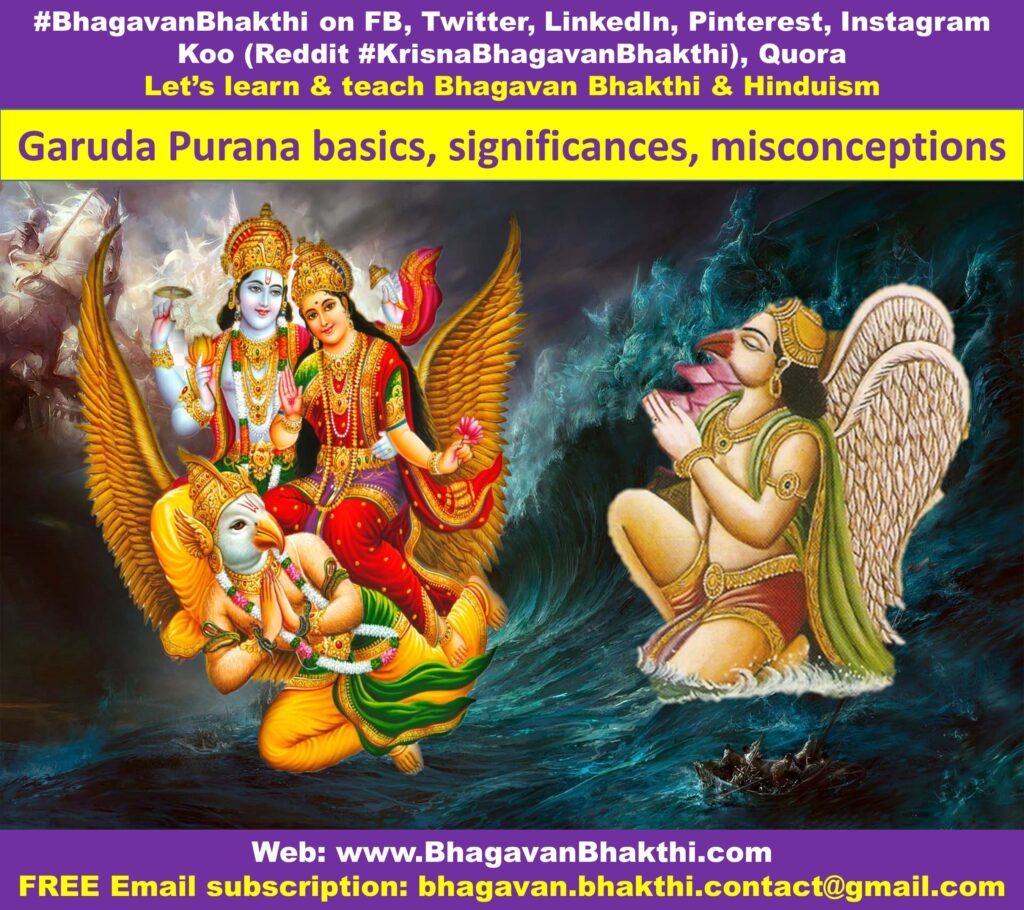 This has been a great treasure gifted not only to the Hindu Sanatana Dharmi people, but rather to the whole world irrespective of the religions.

Bhagavan Sri Veda Vyasa ji compiled these 18 puranas to draw the attention of the reader or its listener towards the ultimate goal of Dharma and the Sarvottama / Supreme Bhagavan Sri Maha Vishnu.

All may not have the right to learn Vedas.

It should be noted that Bhagavan Sri Veda Vyaasa composed these puranas for the sake of those who have no access to Vedas to enlighten them on the Dhamic path.

First of all, let us understand what are the basics of Garuda Purana is:

The great Garuda Purana is one of those ‘Ashtadasha Maha Puranas’ (one of the 18 Maha Puranas) composed by Bhagavan Sri Veda Vyasa Ji.

This granta (divine book) is called Garuda Purana because, it was Garuda Raja the Divine Raja / King of Birds who first heard it from Bhagavan Sri Maha Vishnu.

This was in the form of a dialogue between the two (Bhagavan Sri Maha Vishnu and Garuda Raja).

Later, Garuda Raja recited the same to Maharshi Kashyapa that percolated down the line.

Garuda Purana contains about 19,000 shlokas and classified as Saatvika Purana. 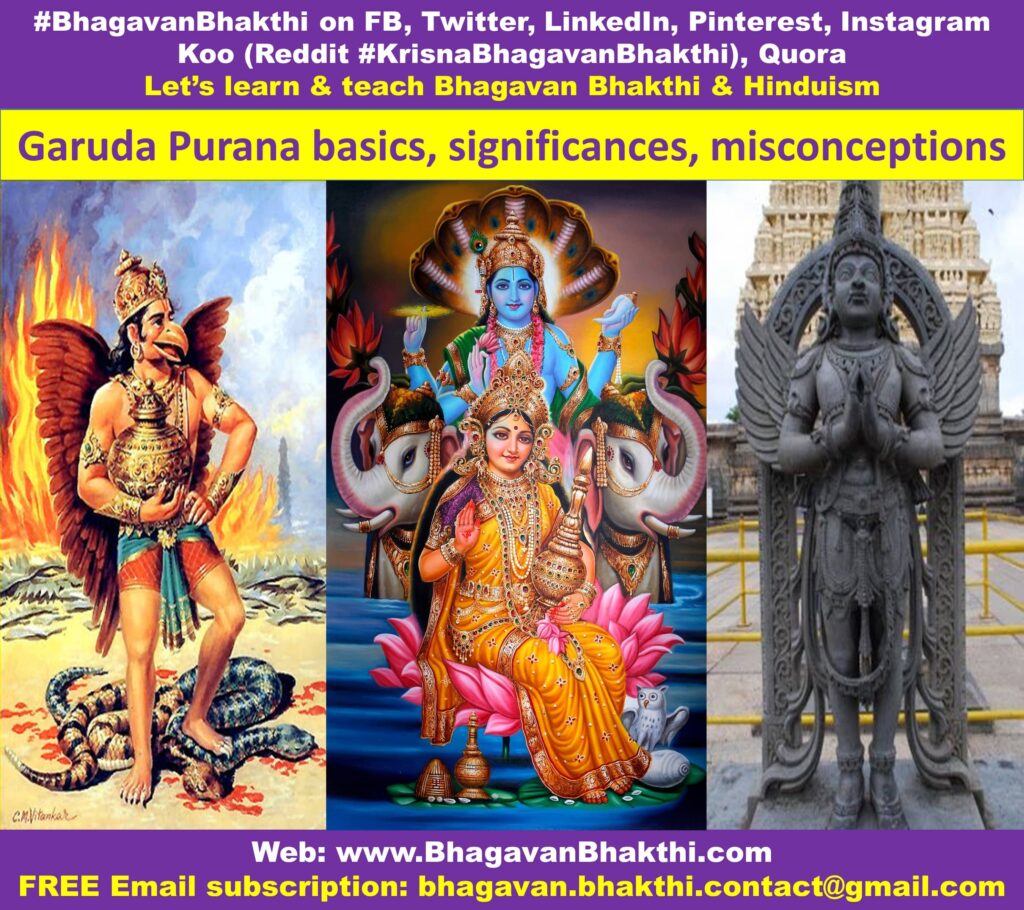 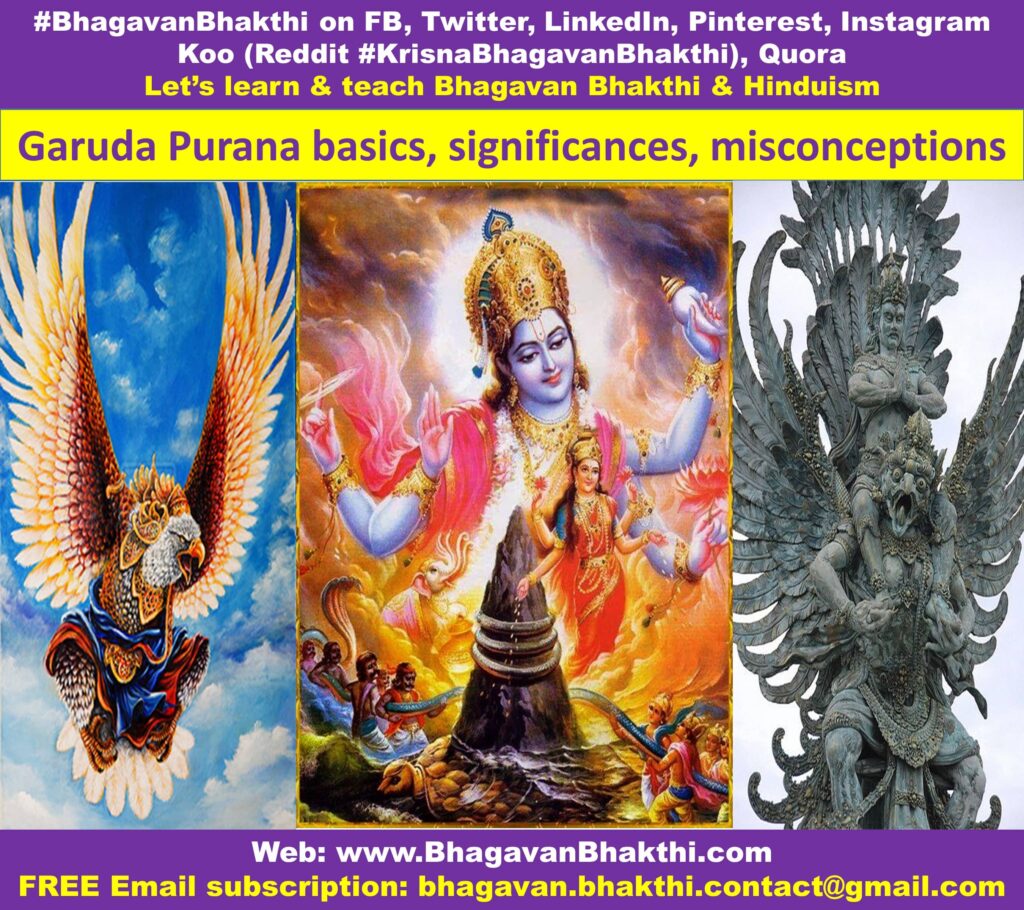 It is not at all possible to date great Garuda Purana.

This is because, there have been several revisions that would have been taken place and latest revision must have taken place during Sri Krishna avatar.

(Please remember that ordinary people can’t do the changes of these great Puranas – Here we are talking about either Bhagavan or other Demigods).

This happened, when Bhagavan Sri Veda Vyasa Ji edited and revised all Puranas before the birth of Bhagavan Sri Krishna.

What are the contents of Garuda Purana

This Garuda Purana has contains:

Origin of the multiverses (unlimited Universes)

Genealogy of Demigods the Sages and the great Kings

The history of Suryavamasha / Solar family

Informs about the origin and propagation of Garuda Raja

Predictions based on physical traits the science of Physiognomy

Various types of daanas / charities and their significance

Why Garuda Purana is unique

The great Garuda Purana’s uniqueness lies in the fact that it is the only sacred granta / text that talks about the life after death.

Garuda Purana also tells us about:

The journey of the aatma / soul

Death of body and its aftermath

Today’s so called modern science could not break the mystery of death and after death’s consequences.

But, the great Garuda Purana has very clearly explains about these realities since unknown age and time.

Among the Shodasha Samskaras (16 samskaras) prescribed in Hindu Sanatana Dharma for a human being, last one is called as ‘Anthyeshti Samskara’ or ‘Apara Karma’ is related to matters pertaining to funeral rites and other ceremonies.

This ‘Apara Karma’ is exclusively and exhaustively explained in the great Garuda Purana.

Experiences of the aatma / soul when it leaves the body,

Fruits of Karma (actions and various types of works humans do),

Detailed description of the Funeral rites to be performed

Funeral procedure including the rituals; followed by the ceremonies starting from death till the completion of one year including Sapindikarana

What are the merits from Garuda Purana

As a dharmacharana / custom, the followers of the Hindu Sanatana Dharma families, paarayana (reading) of Garuda Purana takes place whenever there is a death in the family till the completion of 13th day ceremony (called Vaikuntta Samaraadhana).

During these 13 days, whoever reads and / or listens to the great Garuda Purana, he / she gains great punya (merits).

Those who narrate and the one who listen to the great and sacred Garuda Purana within ten days or even after the death of a person will get absolved from sins and is definitely assured of happiness in this world as well as in the next higher worlds.

Whereas, one who listens to Garuda Purana on the occasion of his Parents death, such parents will attain Moksha / Mukti and also he / she will be blessed with Dharmic progeny.

If someone listens the great Garuda Purana, that person will get rid of sorrows, suffering and will be blessed with peace and prosperity.

By listening to Garuda Purana:

A Brahmana will be bestowed with Vidya

A Kshatriya will be bestowed with Land

A Vaishya will be bestowed with wealth

A Shudra will get refined

If the narrator of Garuda Purana is worshiped, Bhagavan Sri Maha Vishnu will get pleased.

After listening or paarayana (reading) of Garuda Purana, giving daana / charity of any of the Shodasa Daanas (16 daanas) to a Brahmana is prescribed.

During Mahaalaya Pitru Paksha, listening to or reading of Garuda Purana is sacred and meritorious. This pleases our Pitrus (ancestors).

Doing daana / donating the sacred book of Garuda Purana to a Brahmana is also highly meritorious.

If someone reads the great Garuda Purana, one will get an opportunity to refine him-self and move on the Dharmic / righteous path.

Myths and clarifications about Garuda Purana

In today’s Kali Yuga, many people think that, the text of Garuda Purana is inauspicious and hence we shouldn’t read the Garuda Purana or the book shouldn’t be kept at home or should be read only on the occasion of death at home and not on other occasion.

Kali Yuga’s people hesitate to keep this sacred text at their homes or read it because of its fearful subject matter.

It is only a misconception and nothing else.

This is due to the contents of Garuda Purana.

Reading the great Garuda Purana will definitely change the mindset of an evil-doer or a sinner.

Just because the great Garuda Purana deals with death and its aftermath, it is incorrect to tag it as inauspicious.

In the most auspicious granta, that is, Bhagavad Gita, that is in chapter #2 and shloka #27 (Saankhya Yoga), Bhagavan Sri Sri Krishna says:

In fact, death is a reality though we hesitate to accept because of lack of its knowledge in Kali Yuga.

Death grins only at those who have no understanding of Sanatana Dharma and that death can’t give any pain for those who understand its implications and working.

Death, can no more be a threat to a wise man.

Death is a major learning experience.

To be frank, the entire epic of the great Garuda Purana is in the form of glorious dialogue between Bhagavan Sri Maha Vishnu and his Divine vehicle Garuda Raja.

When it was narrated and explained by Bhagavan Sri Maha Vishnu Himself to Garuda Raja, how can it be inauspicious my dear friends? Just think it over again and again.

In this whole multiverses, there is only one thing which is inauspicious is hating and not following Bhagavan Sri Maha Vishnu’s words.

Even in Bhagavad Gita, Bhagavan Sri Krishna makes a reference to the law of Karma, death & its realities, reincarnation etc.

But we Kali Yuga people don’t consider reading and understanding the contents of the great Bhagavad Gita. In fact we should adore it.

We should always note that, tila and Darbha have been emerged out from the body of Bhagavan Sri Maha Vishnu.

One need not get scared with the contents of the great Garuda Purana either to read or to listen.

Garuda Purana can be treated as learning granta (sacred text).

Garuda Purana enhances one’s spiritual knowledge to discipline himself / herself and to follow the Dharmic / righteous path.

Garuda Purana acts as a speed breaker for a person who is driving his life very fastly and rashly.

Garuda Purana can be treated as a caution for wrongdoers and acts as a direction to avoid committing sins.

Dear friends, now tell me, is it not good to read Garuda Purana and understand its contents and implications when we are still alive?

Instead of our kids reading for us after our death, why don’t we start reading, understanding, following the great Garuda Purana from today and now itself.

I suggest that every one should read the granta / sacred text of Garuda Purana at least once in their life time and there is nothing inauspicious about it and it is only an illusion of Kali Yuga’s people.

No ill-fate befalls on the devotees of Bhagavan Sri Vasudeva (read as Vaasudeva and not as Vasudeva), that is, Bhagavan Sri Maha Vishnu and they will never have fear from birth, death, old age and diseases.

(One should always remember that death is inevitable, but the above meaning is that the ‘apamrutyu’, that is, death which may come early than the right time).

Meaning of this shloka is:

Srimann Narayana, who wears the daivi / divine garland of flowers (vanamaali), who has the mace (gada – Koumodaki), who has the bow (Shaarnga), who has the conch (Panchajanya), discus (chakra – Sudarshana chakra), and the sword (nandaki), may that Bhagavan Sri Maha Vishnu protect all of us.

To know more about the Garuda Raja and Garuda Panchami, you can visit the below link:

More information will be added. Please visit after some time.