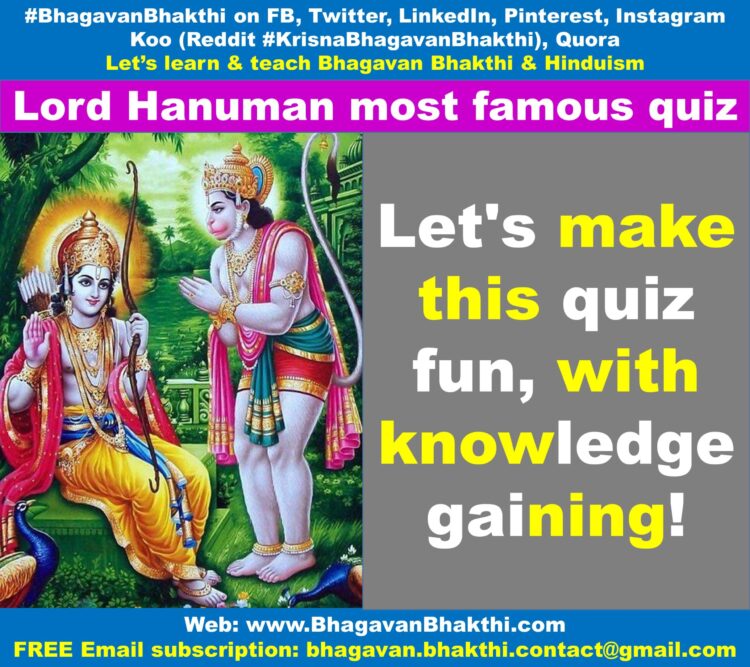 After Sita Devi, it is Hanuman who is most lovable and favorite to Bhagavan Sri Rama.

There are unlimited number of important points are there to learn about Hanuman, among those, let us know few of them as below.

Let us make this quiz fun and knowledge gaining:

1. Who is Hanuman?
… Answer
He is the greatest devotee of Bhagavan Sri Rama after Sita Devi.

2. What is the meaning of the name ‘Hanuman’?
… Answer
Hanuman = Hanu + man. Here Hanu means someone who is having the strongest jaws (after Bhagavan Vishnu and Mahalakshmi Devi), and man (Sanskrit) means man (English).

3. Who are the parents of Hanuman?
… Answer
Kesari and Anjana Devi.

5. Is Hanuman Lord Shiva avatar?
… Answer
No, Hanuman is an avatar of Vayu Deva.

6. Hanuman is an important character in which Great Hindu epic?
… Answer
Ramayana, he is also seen in Mahabharata, Bhagavatar Purana.

7. Who is the greatest devotee of Bhagavan Rama after Sita Devi?
… Answer
Hanuman.

10. In which disguised form Hanuman meets Bhagavan Rama for the first time?
… Answer
As a knowledgeable Brahmin.

11. Hanuman was the minister of whom?
… Answer
Sugriva (he is an avatar of Lord Surya Deva).

12. Which mountain rose up from the sea to provide a resting place to Hanuman while leaping to Lanka?
… Answer
Mainaka.

13. Which demon serpent tried to block the way of Hanuman during his leap to Lanka??
… Answer
Surasa.

15. What did Hanuman Give to Sita to convince her that he was a messenger of Bhagavan Rama?
… Answer
Finger ring.

16. To which arrow did Hanuman willingly surrender and allowed to be captured by Meghanath?
… Answer
Brahmastra shot by Meghanath (Indrajeet).

17. Who was there in the support of Hanuman in the court of Ravana after he was captured?
… Answer
Vibhishan, the youngest brother of Ravana.

18. For destroying Ashoka Vatika and killing demons, what was the punishment given by Ravana to Hanuman?
… Answer
To put Hanuman’s tail on fire.

19. What jewel was given by Sita Devi to Hanuman, so that he can show it to Bhagavan Rama?
… Answer
Chudamani, the jewel which is worn by Sita Devi in her hairs.

20. In the Mahabharata war on whose chariot’s flag did Hanuman appears?
… Answer
Arjuna, the great archer.

21. Which mountain did Hanuman lift and bring to Lanka to save the lives of Lakshman and other Vanaras?
… Answer
Dronagiri, in which Sanjeevini plants were grown.

22. Who reminded Hanuman that he can easily leap over the great Sagara (Ocean)?
… Answer
Jambavan.

23. What is the meaning of the Hanuman’s name Maruti?
… Answer
Maruti means, he is the one who is one among the Marutas (divine people of a group called Rujus who live in Satya loka).

24. In Dwarapua Yuga, Vayu Deva took avatar as whom?
… Answer
Bhima, he is same as Hanuman. Both are the avatars of Vayu Deva.

27. What is the main weapon used by Hanuman in Ramayana?
… Answer
Gada or Mace, but Hanuman is highly capable of using all the weapons. He is the greatest after Bhagavan Vishnu and Mahalakshmi Devi.


More information will be added to this on regular basis. Please visit after some time.

To know about Lord Krishna most famous quiz, click the below link:

To know about Lord Krishna most famous quiz, click the below link:

To know about Lord Shiva most famous quiz, click the below link: