What is the importance of Tulsi plant in Hinduism

“Each and every house with a divine Tulasi plant is a place of divine pilgrimage. In these houses there won’t be any diseases, no messenger(s) of Yama Deva (God of Death) can enter.” This is said in Skanda purana, Padmapurana Uttarakhanda. 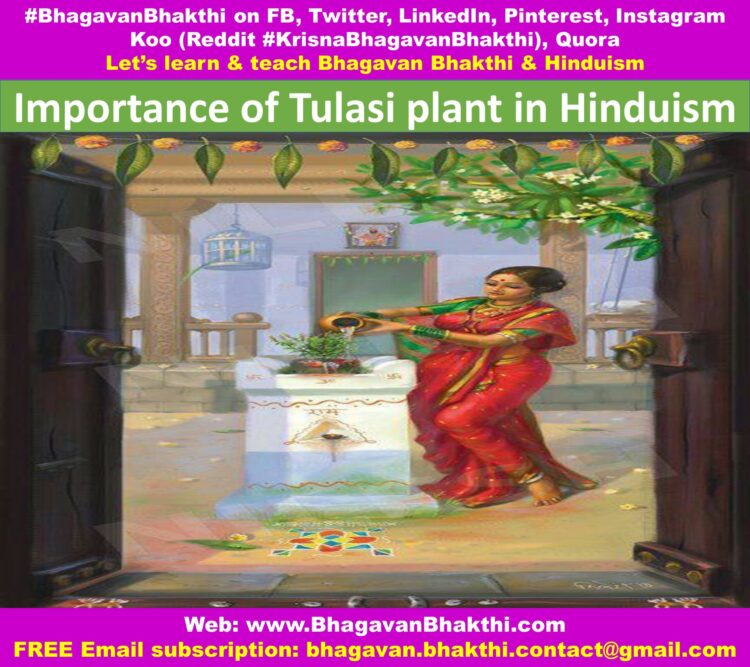 Tulasi is the one which is incomparable (in its qualities).

The divine Srimad-Bhagavatam tells the special position of the divine Tulasi plant:

“Although flower producing plants like the mandara, kunda, kurabaka, utpala, champaka, arna, punnaga, nagakesara, bakula, lily, and parijata are full of transcendental fragrance, they are still conscious of the austerities performed by Tulasi. Tulasi is given highly special preference by the Bhagavan Sri Hari, who always garlands Himself with Tulasi leaves.”

Tulasi is the divine essence of all devotional activities.

The leaves, flowers, roots, bark, branches, trunk, and shade of Tulasi-devi are all divinely spiritual in all respect.

A house where Tulasi-devi (Tulasi plant) is present never falls on bad times, and it becomes purer than all holy places.

The fragrance of Tulasi-devi (Talasi plant) purifies all who smell it.

One who sees or comes near a house or garden where the Tulasi plant is present, gets rid of all his sinful reactions, including that of killing a brahmana (Brahma hatya).

A recent research indicates the following: 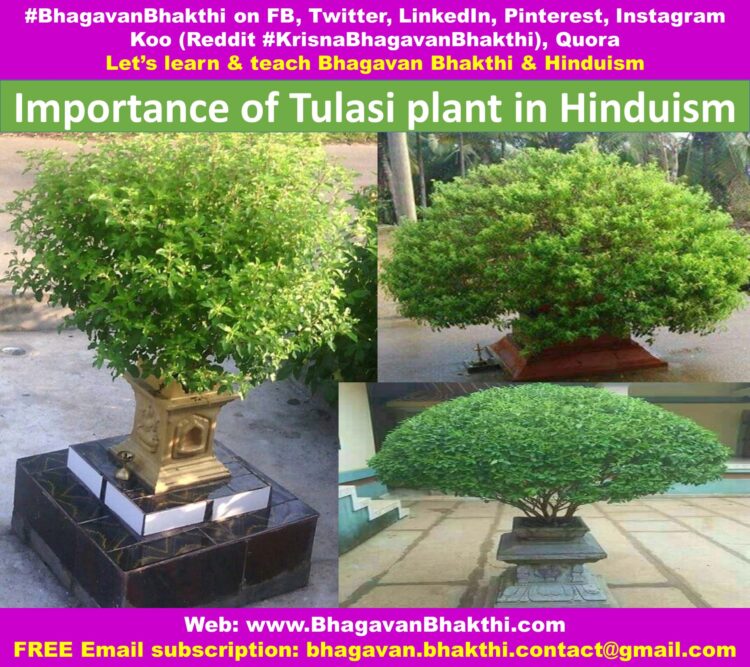 9. Tulasi improves digestion and absorption of other nutrients,

10. Tulasi even repels mosquitoes and other potentially harmful insects, etc.

(All these are very much said in our Shastras and were always known by the ancestors unlike today’s so called modernized people.) 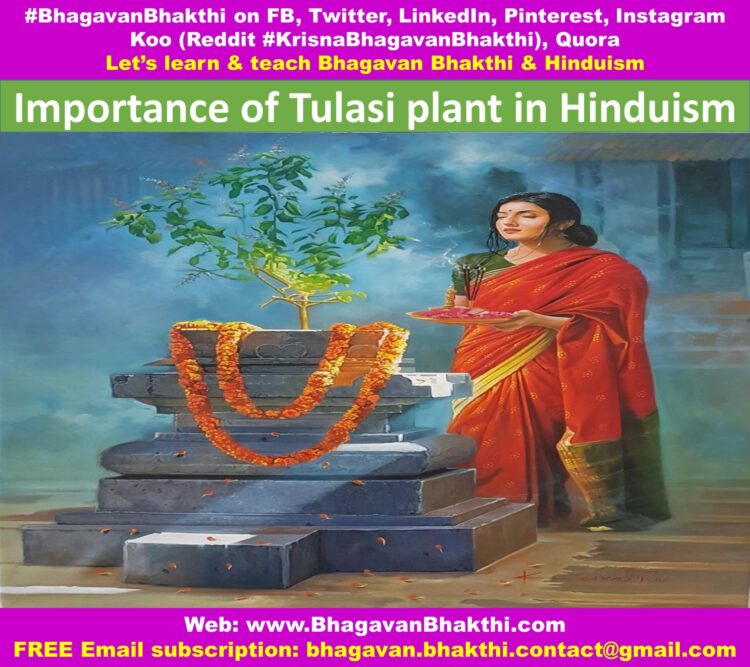 Other significance of Tulasi plant: 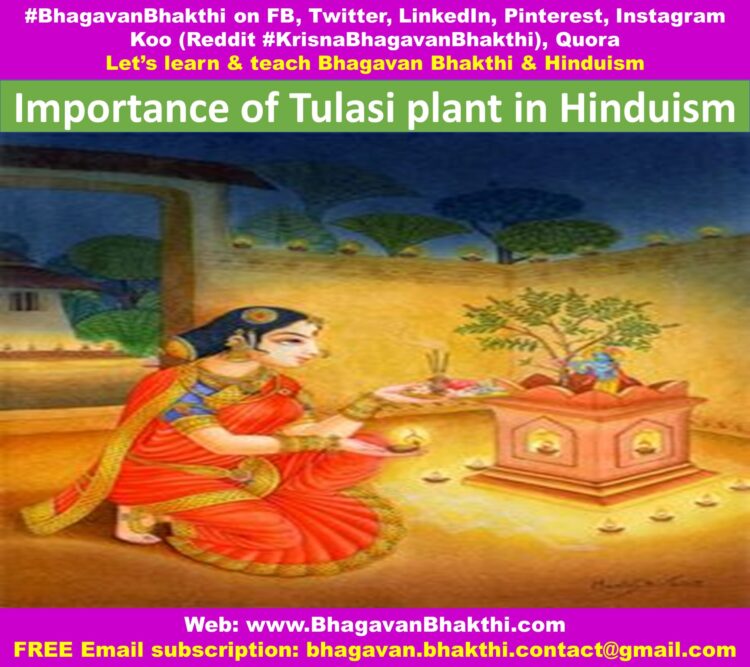 Tulasi Devi took her birth on the Earth as the daughter of King Dharmadhwaja.

Tulasi Devi in the divine human form was an epitome of divine beauty and was blessed with an amsha (divine part) of goddess Sri Maha Lakshmi Devi.

The king Dharmadhwaja, gave her the appropriate name of Tulasi.

(But, nowhere is it said that Tulasi herself is Sri Maha Lakshmi.)

Bhagavan Sri Vishnu also gave a boon to Tulasi that “she will attain the company of himself (Sri Vishnu) through the Tulasi dala (a bunch of Tulasi leaves formed at the end of the branch) given by his all the devotees (Vaishnavas)”. 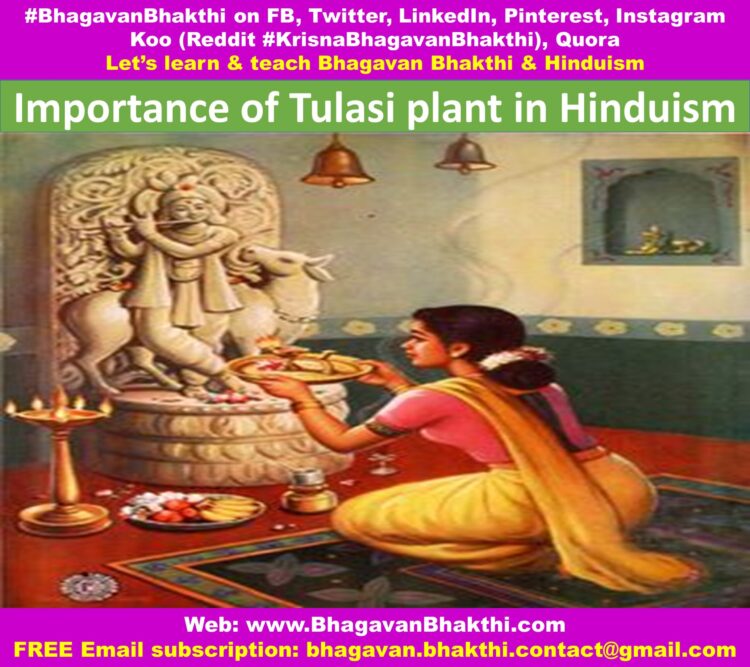 During the Mahabharata period, Jambavati Devi is the best (shreshta) among the six great women (shanmahishis – other than Sri Rukmini Devi and Sri Satyabhama Devi, who were the avatars of Sri Maha Lakshmi Devi) of Sri Krishna.

Jnanis (divinely learned persons) say that, it is Jambavati in the form of Tulasi, who is worshipping Bhagavan Sri Vishnu on a daily basis (tuLasee jAmbavatee prOktA). This means, Jambavati Devi is an avatar of Tulasi Devi.

Meaning of this is: Doing the pooja with all the other divine items, but without Tulasi is not accepted by Bhagavan Sri Vishnu.

Many of us know that, all flowers are not available in all seasons.

However, Tulasi is the only plant (with leaves, branch, dalas – petals, etc) which has the essence of all flowers concentrated in itself is available through out the year.

Other significances of Tulasi:

All bad karmas will be vanished by a single darshana (divinely watching) of Tulasi plant,

‘Deha shuddhi’ will happen (Body will be divinely cleansed by touching (sparsha),

Diseases will be removed by doing ‘namaskaram’ (prostration),

We can easily escape (parihara) from Yama’s clutches by watering Tulasi plant on daily basis,

We will become a pure devotee of Bhagavan Sri Vishnu by growing Tulasi plant at our house,

Apart from this, what will be the divine benefits of Tulasi pooja with utmost devotion?

Divine positive and good things (shubha) in both this world (material) and the other world (spiritual) (means – iha and para) can be easily obtained.

A great devotee of Bhagavan Sri Vishnu called Purandara Dasa Ji has said, Tulasi will recommend grant of salvation (moksha) with Sri Hari for those who worship her daily.

This means, during early morning (on daily basis), the Tulasi brindavana placed in the front of the home should be seen (darshana), clean the frontage with water, and decorate with rangoli (divine floor decoration with white stone powder), recite the following:

O Tulasi, friend of Lakshmi Devi, embodiment of mangala (divine auspiciousness), one who erases all types of sins, bestows punya (divine good deeds), beloved of Bhagavan Sri Narayana, who is prostrated by Devarshi Narada, I prostrate to you.

Story of Tulasi and Jalandhara:

Brunda was a chaste wife of a demon Jalandhara.

Jalandhara had obtained eternal status (avadhyathwa meaning one who cannot be killed) using the chaste character of his divine wife and was indulging in all kinds of crimes.

Once Bhagavan Sri Vishnu came to Brunda in the form of her husband and embraced her.

Though she lost her chastity and hence her husband, she obtained the divine grace of Sri Krishna, became a temple (mandira) for Tulasi, and one who is divinely worshipped (poojya) by devotees (bhaktas).

She became a divinely eternal (nithya) one who is worshipped with all mangala (divinely auspiciousness) items (sumangali).

Therefore, Tulasi platform (also called the brindavana or the pot/container in which the Tulasi is grown) gets the first pooja followed by the plant.

There are two varieties of Tulasi plants viz. Sri Tulasi and Krishna Tulasi.

Krishna Tulasi has blackish leaves. This is more suited for pooja in the brindavana.

On the other hand Sri Tulasi which has green leaves is more suited for offering to Bhagavan Sri Vishnu.

Women are only free of watering the Tulasi plants and worship them.

But the Tulasi flowers, dalas etc have to be removed on regular basis by men, which will make the plant spread and grow well.

Plucking of Tulasi dalas, flowers etc is banned on all the Tuesdays, Fridays and Dwadashi days, and also banned before bath and after meals. So also transplanting of Tulasi plants.

Plants can be grown from seeds and saplings.

Usually these plants do not get harmed. They grow very well with normal water in a moderate climate where it is neither too hot nor too cold.

Tulasi plant is valuable just like an elephant both during its life time and afterwards.

The dry stem of the Tulasi plant is used to make beads used in garland for wearing. It is used in homas and havanas.

It is also ground on a stone surface, the resulting paste used in the preparation of gandhodaka used for Teertha preparation.

When the stem of the Tulasi flower is used in the preparation of mangala arati batthi (divine cotton wick used for mangala arati), it is the best (shreshta), batthi will be straight and preparation will also is easy.

All people who belong to three varnas can worship Tulasi. Those of fourth Varna can grow the plants and that itself means of earning Punya Karma (divine good deeds).