1. What are the names of Maharshi Kashyapa’s wives? 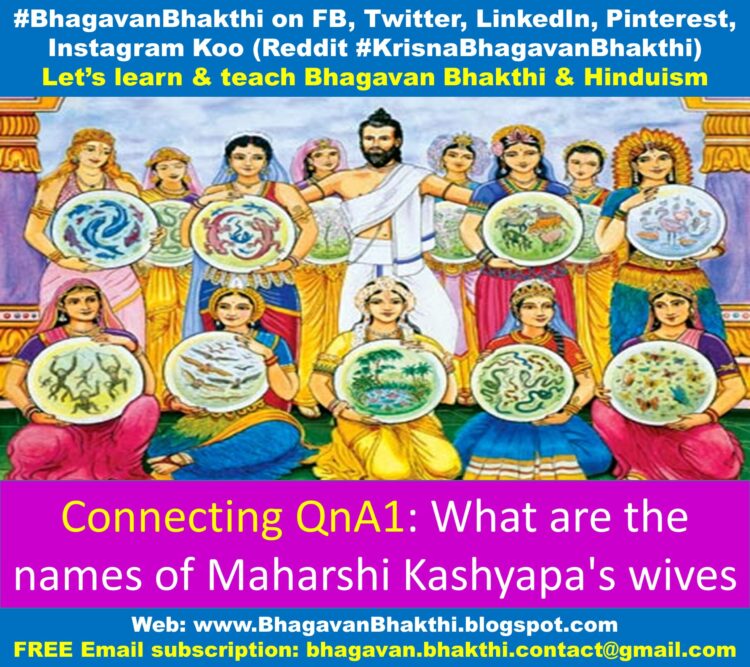 For more information, you can visit this link:

Who is Maharshi Kashyap, his wives and their children names

2. What is the correct story of Hanuman not recognizing Sanjivani 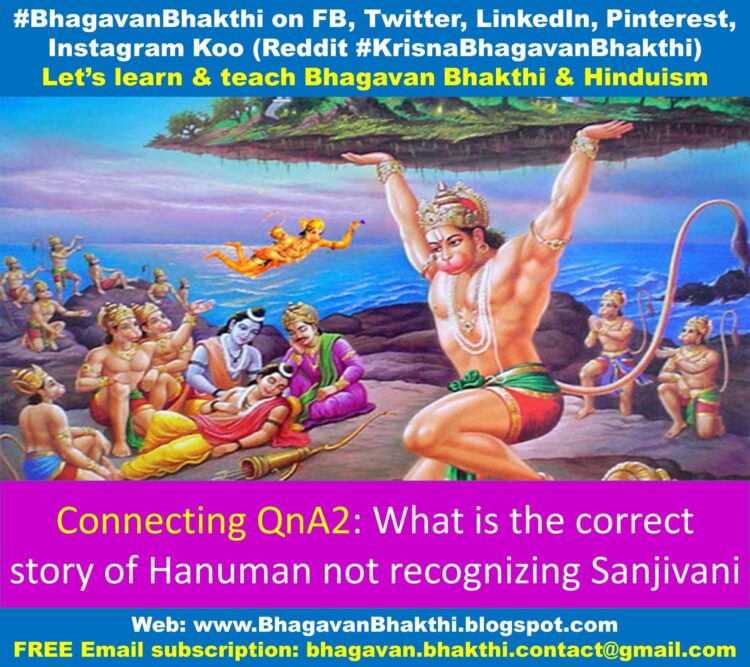 But we should note that Hanuman is not an ordinary monkey or human. He will be the next Brahma Deva in the next Kalpa.

So, how can he be confused?

I have written the full story about this as per the ‘moola ramayana’ and ‘valmiki ramayana’.

Kindly refer this below link to know the full story about this:

3. What are the different avatars of Prahlada Maharaja? 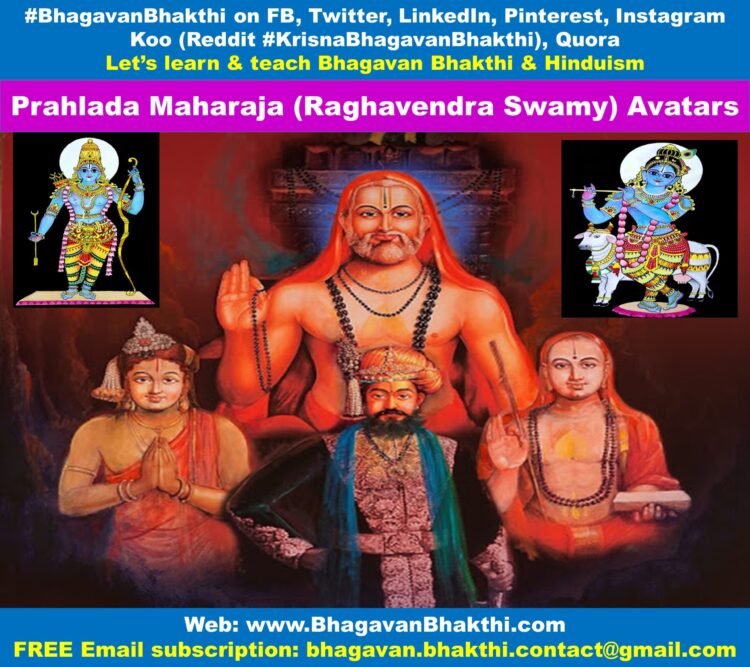 Answer: Prahlada Maharaja totally had 5 avatars. Names are as given below:

c. Bhalika Maharaja (Dwaparayuga) – He participated in the Mahabharata war.

I have written more details on this. Please visit the below link for more knowledge:

What are the different avatars of Prahlada Maharaja (Raghavendra Swamy)

4. What is the story of Narad Maharshi’s previous life? 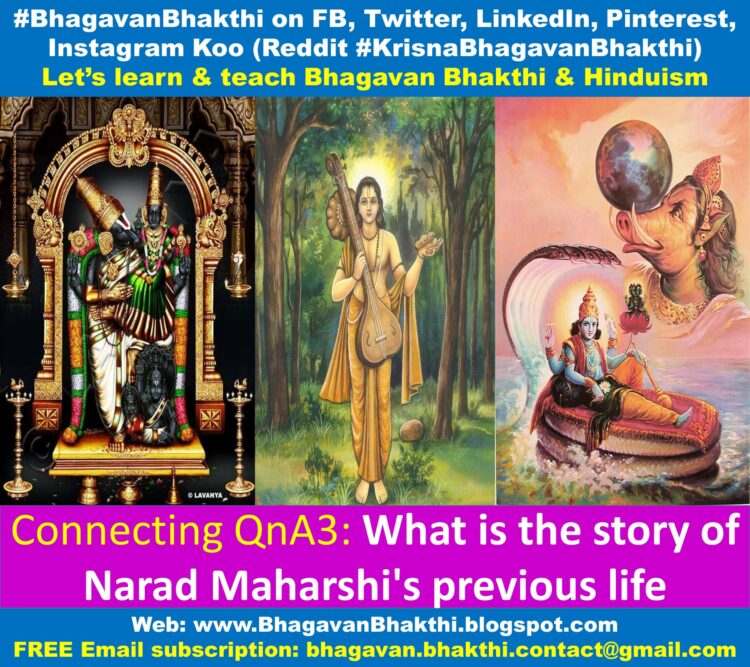 Answer: This is given the Varaha Purana. I have written a post on this, please click the below link to continue reading:

What is the story of Narad Maharshi’s previous life?

5. What is the meaning of Partha and Parthasarathi? 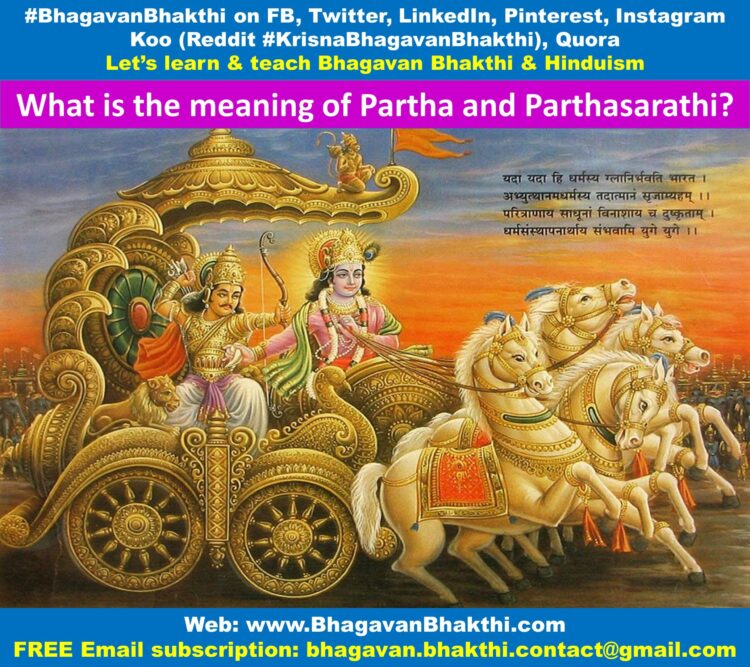 Answer: Partha means son of ‘Pritha Devi’ (original name of Kunti Devi). Arjuna’s another name is Partha, as he is the son of Pritha Devi.

Pritha was born to Yadava chief Shurasena. Pritha was adopted by her childless uncle named Kuntibhoja and she was renamed as Kunti.

During her early teenage years, she did seva (divine serve) to Maharshi Durvasa (an avatar of Lord Shiva) and he blessed Kunti Devi with a divine mantra.

(We should remember that Kunti Devi’s age was about 12 or 13 years when Sage Durvasa blessed Kunti Devi with the divine mantra.)

Out of curiosity, the young girl used the mantra to invoke Lord Surya and was blessed with a son named Karna (an avatar of Lord Surya – In his earlier life, Karna was born as Sugriva during the Ramayana period). 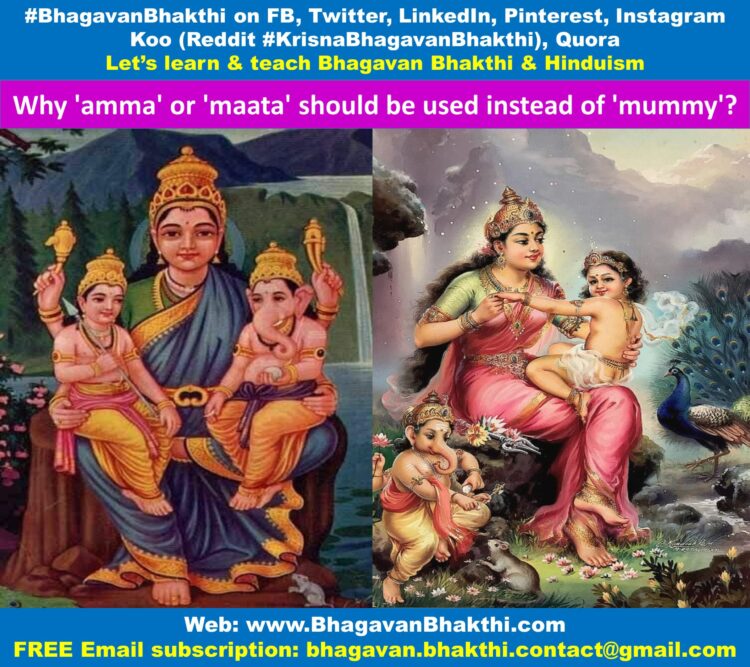 Both amma and maata is derived from the Sanskrit word ‘amba’.

Both Ananta (Bhagavan Sri Vishnu) and Sri Maha Lakshmi Devi both are present in this divine name. Thus ‘amma’ or ‘maata’ should be used, instead of ‘mummy’.

This is the greatness of the Hindu / Sanskrit names.

Whereas, mummy means a death person who is buried and believed to come back again to life as per Egyptian belief.

Now, it is your choice to use amma or maata, or mummy.

7. What is the meaning of the name Putana? 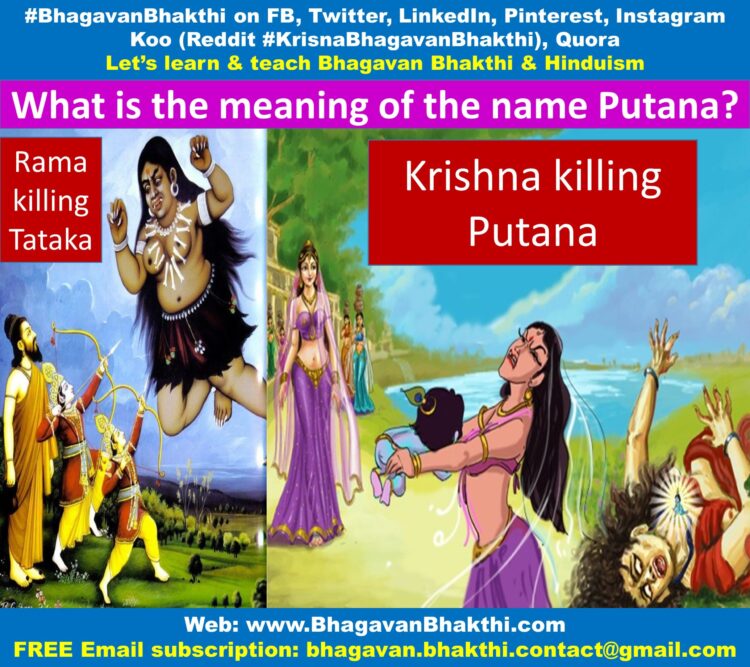 This means, she was completely ‘apavitra’ (impure).

pUtana was the amalgamation of two ladies, that is, one was Urvashi Devi and another one was ‘Tataka’ (same demoness who was killed by Bhagavan Sri Rama).

8. Why Sri Krishna is known as Bal Gopal? 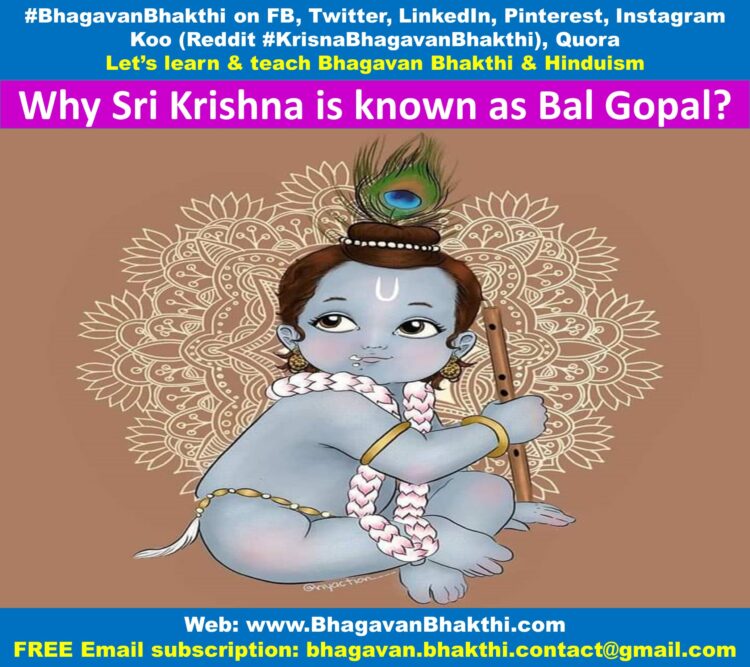 Answer: In Sanskrit Bal means hair. Sri Krishna was born from a single string of a hair of Sri Hari. Thus, Sri Krishna is known as Bal Krishna / Gopal (Bal doesn’t mean child – but instead it means hair. Even in Hindi we use the same word Bal for hair).

Gopal means, he is the protector of all the Gopikas and Gopalas.

9. What is the meaning of the name “Bhishma”? 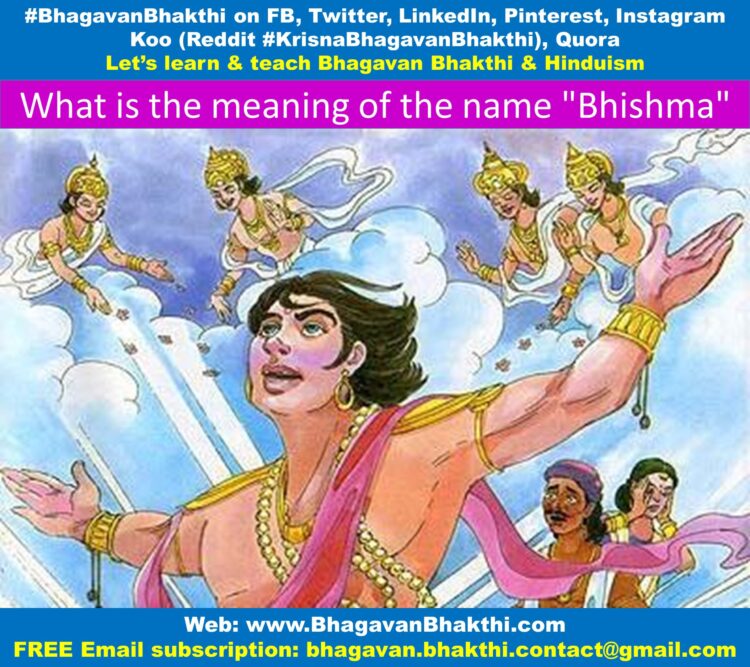 Answer: Bhishma means, someone who has taken a ‘bhayankara’ (terrible) oath. These types of oaths can’t be taken by ordinary men, especially in Kali Yuga.

This means, ‘I am’ (Devavrata / Bhishma) is taking a bhayankara (terrible) oath.

To know full details of the Great Bhishma, visit this below link:

What are the Greatness of Bhishma 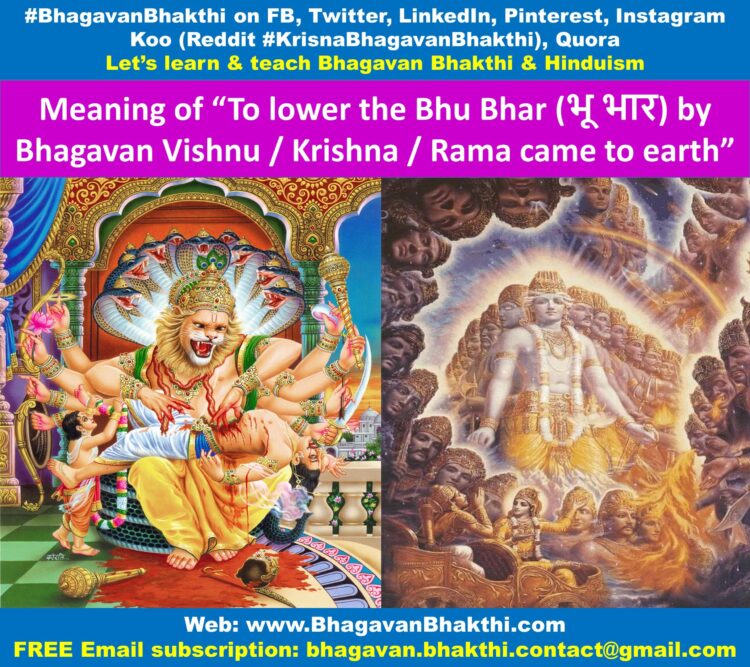 Whenever the adharmis / rakshasas / demons start to cause problems to dharmic (people who follow Sanatana Dharma) people, then Mother Earth (Bhoodevi / Prithvi Devi) along with other Devatas (Demigods) pray to Bhagavan Vishnu to come down to earth and cleanse the earth from these adharmis / rakshasas / demons, so that again the Sanatana Dharma can be rebuild.

After hearing the prayer from the Mother Earth and other Devatas (Demigods), Bhagavan Vishnu comes to earth and cleanses the earth from these adharmis / rakshasas / demons.

For thus main reason, Bhagavan Vishnu takes different avatars like Rama, Krishna, Narasimha etc and destroys all the adharmis / rakshasas / demons from this earth and rebuilds the Sanatana Dharma.

Remember the shloka from Bhagavad Gita 4.8:

Also, I will save all the sadhus (dharmic people) from the clutches of these adharmis / rakshasas / demons. 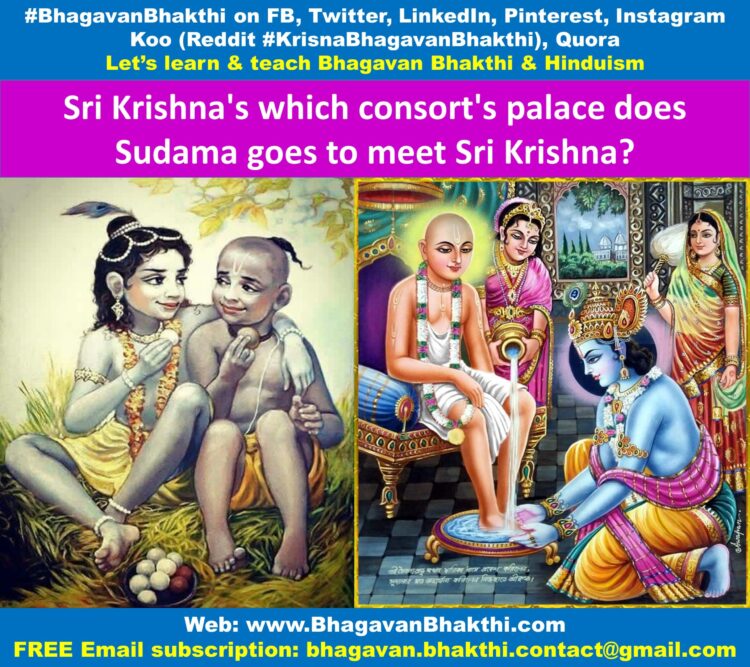 Answer: Sudama after been told by his wife Susheela “to go and meet Sri Krishna”, he comes to Dwaraka and goes to Mitravinda Devi’s mahal (divine palace) which was made of gold, diamonds, rubies, costly stones etc.

More questions and Answers will be added to this on regular basis. Please visit after some time.