What are the FAQs about Ramayana (Lord Rama)

राम / ರಾಮ / Rama, just this name Rama is enough for us to get both material and spiritual materials. Just chanting the name Rama can give us the most divine “Vaikuntha”.

Rama is the 7th avatar of Bhagavan Sri Vishnu in the dasha avatar category. Rama’s consort name is Sri Sita Devi and she is an avatar of Sri Maha Lakshmi Devi.

The greatest bhakta / devotee of Sri Rama after Sri Sita Devi is Mighty and Great Sri Hanuman. Rama is the eldest son of Dasharatha and his mother name is Kausalya Devi. His brothers’ names are Lakshmana, Bharata and Shatrugna. Now, let us know more and more FAQs about Lord Sri Rama.

1. What is the meaning of the name Rama? 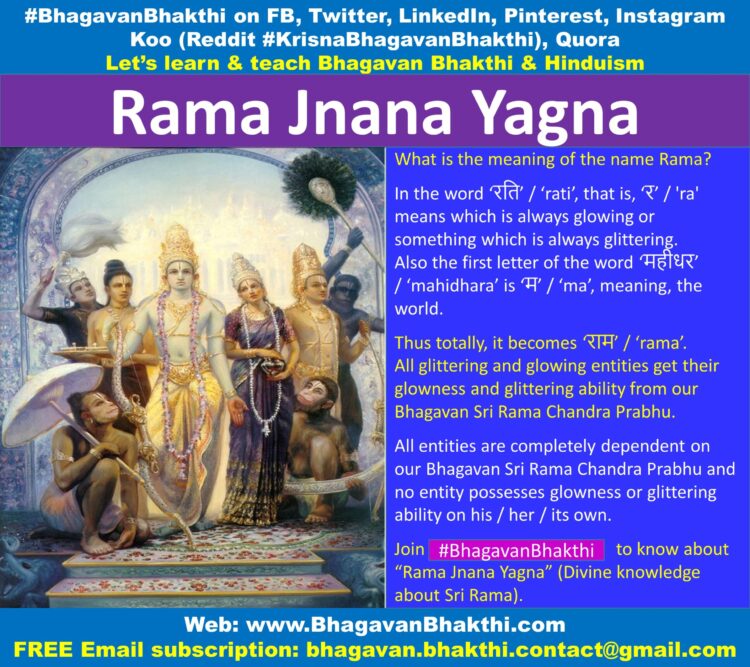 Answer: (Please remember that Rama has unlimited number of meaning. In that, let us know one meaning as given below).

All glittering and glowing entities get their glowness and glittering ability from our Bhagavan Sri Rama Chandra Prabhu.

All entities are completely dependent on our Bhagavan Sri Rama Chandra Prabhu and no entity possesses glowness or glittering ability on his / her / its own.

You will get more information about this from this link:

What is the Rama name correct meaning

2. How can we get Lord Rama and attain moksha in this Kali Yuga? 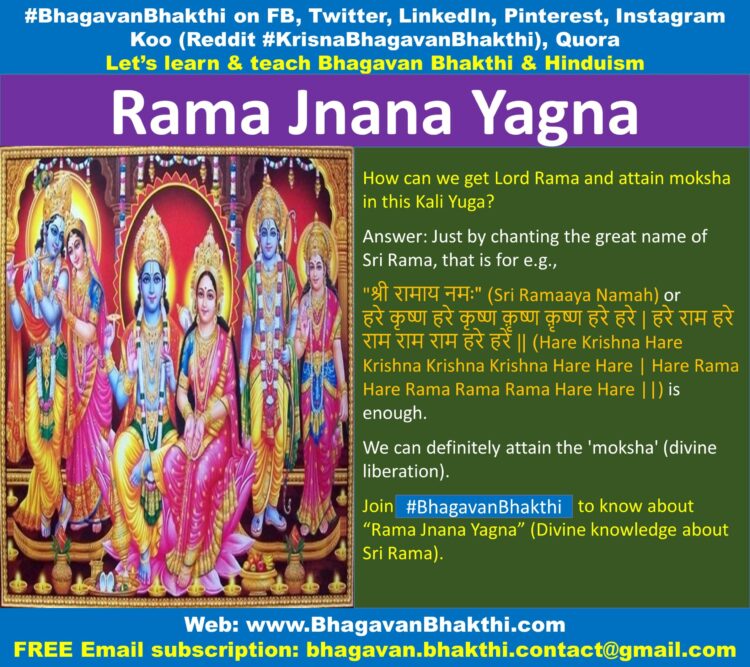 Answer: Just by chanting the great name of Sri Rama, that is for e.g.,

We can definitely attain the ‘moksha’ (divine liberation).

3. What is eka shloki Ramayana? 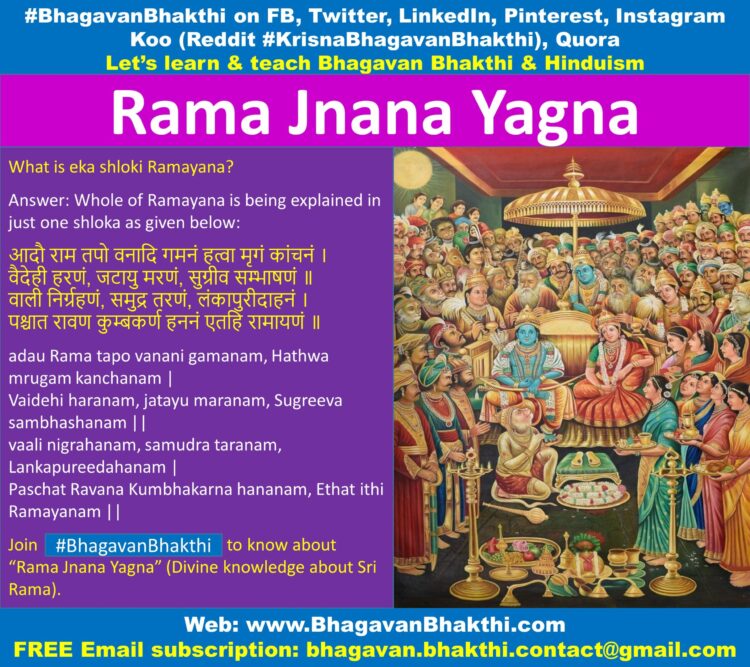 Answer: Whole of Ramayana is being explained in just one (Eka) shloka as given below:

Sri Rama went to forest. He chased the deer. Sita was kidnapped, Jatayu was killed. There were discussions with Sugriva. Bali was killed.

The ocean was crossed. Lanka was burnt and later Ravana and Kumbha karna were also killed. This is the story of Ramayanam.

4. What is the difference between Lord Vishnu’s Rama avatar and Krishna avatar killing demons? 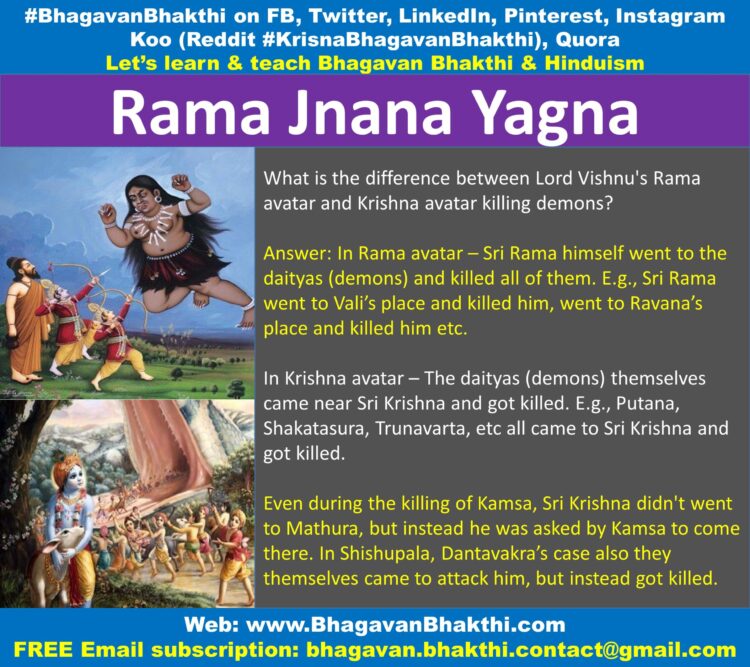 Even during the killing of Kamsa, Sri Krishna didn’t went to Mathura, but instead he was asked by Kamsa to come there. In Shishupala, Dantavakra’s case also they themselves came to attack him, but instead got killed.

To know the “List of demons killed by Sri Rama, visit the below link:

To know the “List of demons killed by Sri Krishna, visit the below link:

5. What is the correct story of hanuman not recognizing Sanjivani? 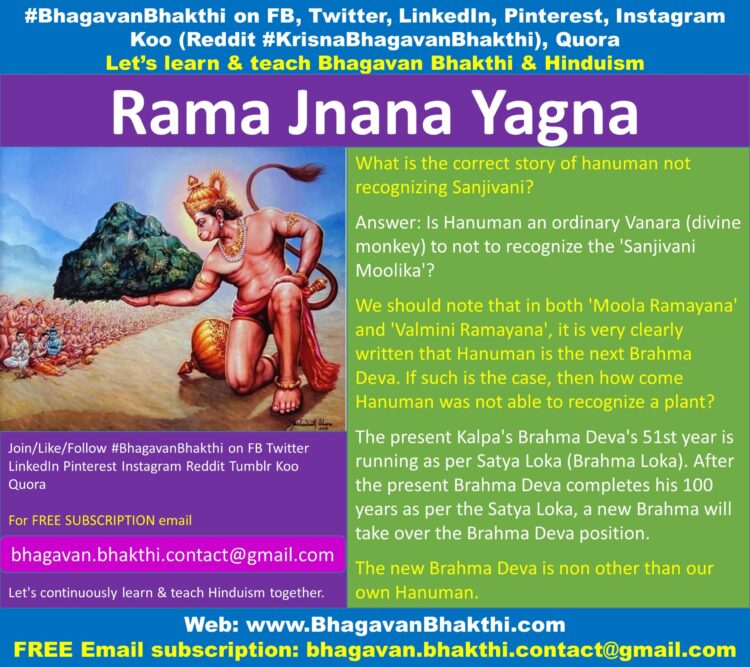 Answer: Is Hanuman an ordinary Vanara (divine monkey) to not to recognize the ‘Sanjivani Moolika’?

We should note that in both ‘Moola Ramayana’ and ‘Valmini Ramaya’, it is very clearly written that Hanuman is the next Brahma Deva. If such is the case, then how come Hanuman was not able to recognize a plant?

The present Kalpa’s Brahma Deva’s 51st year is running as per Satya Loka (Brahma Loka). After the present Brahma Deva completes his 100 years as per the Satya Loka, a new Brahma will take over the Brahma Deva position.

The new Brahma Deva is non other than our own Hanuman.

More information is available from this link:

6. Why Rama killed Vali secretly behind a tree? 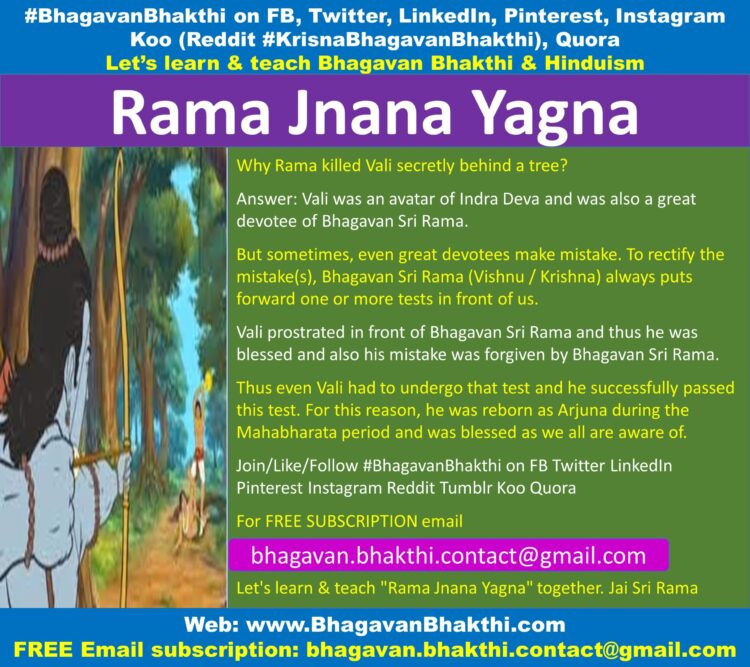 Answer: Vali was an avatar of Indra Deva and was also a great devotee of Bhagavan Sri Rama.

But sometimes, even great devotees make mistake. To rectify the mistake(s), Bhagavan Sri Rama (Vishnu / Krishna) always puts forward one or more tests in front of us.

Thus even Vali had to undergo that test and he successfully passed this test. For this reason, he was reborn as Arjuna during the Mahabharata period and was blessed as we all are aware of.

To know more about this deep secret, visit the below post:

Why Rama killed Vali secretly behind a tree?

7. For how many years did Bhagavan Sri Rama ruled Ayodhya? 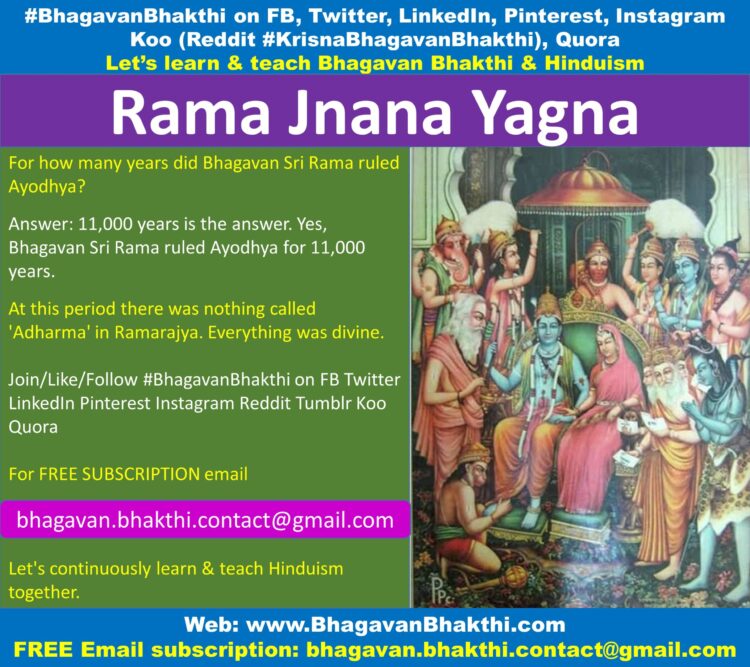 At this period there was nothing called ‘Adharma’ in Ramarajya. Everything was divine.

8. Who all have defeated Ravana? 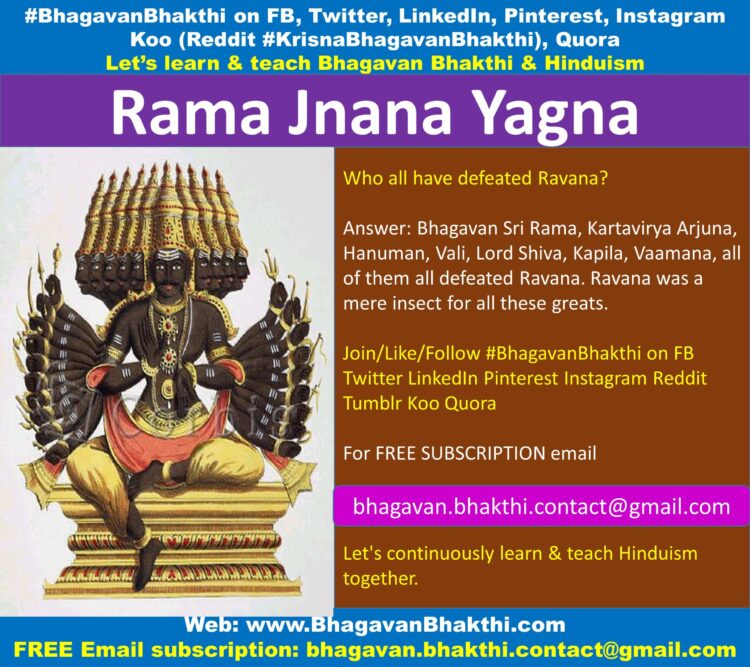 Answer: Bhagavan Sri Rama, Kartavirya Arjuna, Hanuman, Vali, Lord Shiva, Kapila, Vaamana, all of them all defeated Ravana. Ravana was mere insect for all these greats.

9. Who was the “Vaidya” (divine doctor) among Vanaras (divine monkeys)? 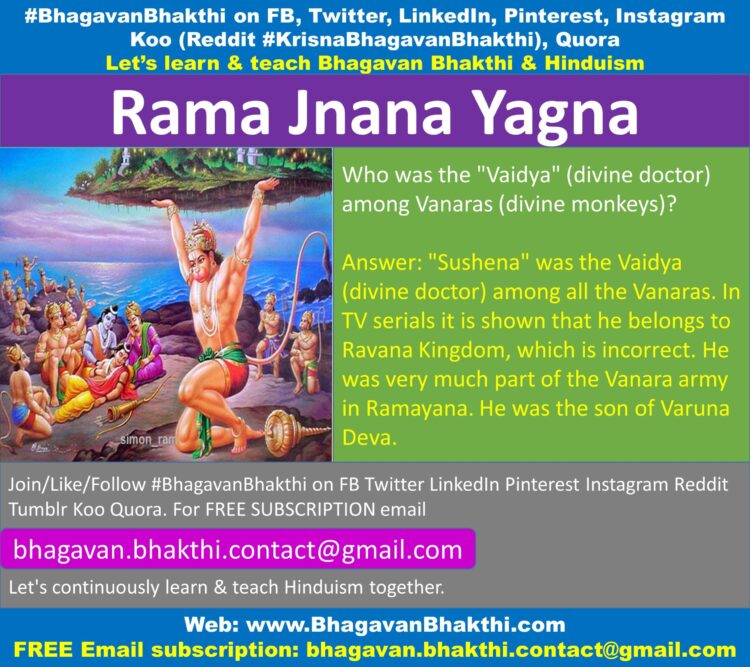 Answer: “Sushena” was the Vaidya (divine doctor) among all the Vanaras. In TV serials it is shown that he belongs to Ravana Kingdom, which is incorrect. He was very much part of the Vanara army in Ramayana. He was the son of Varuna Deva.

10. Why only Vanaras (divine monkeys) got life with the “Sanjivani” and not Rakshasas (demons)? 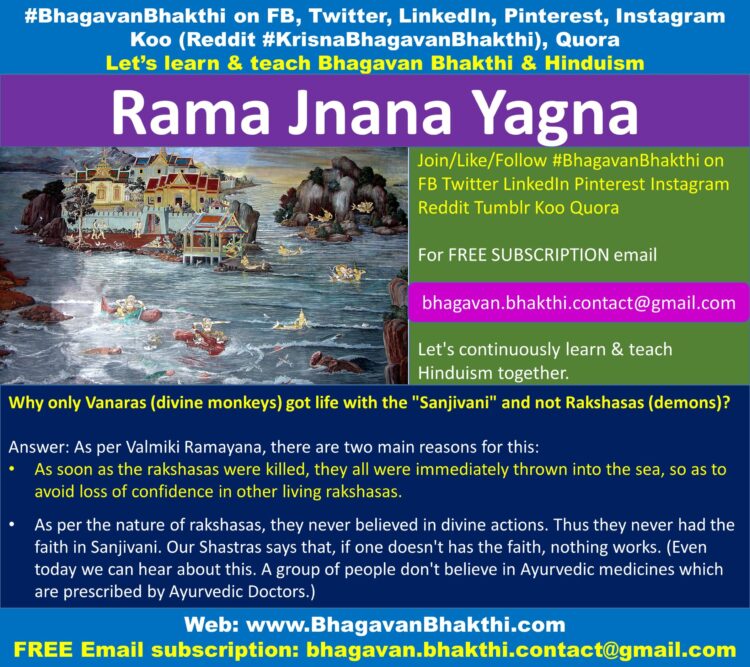 Answer: As per Valmiki Ramayana, there are two main reasons for this:

a. As soon as the rakshasas were killed, they all were immediately thrown into the sea, so as to avoid loss of confidence in other living rakshasas.

b. As per the nature of rakshasas, they never believed in divine actions. Thus they never had the faith in Sanjivani. Our Shastras says that, if one doesn’t has the faith, nothing works. (Even today we can hear about this. A group of people don’t believe in Ayurvedic medicines which are prescribed by Ayurvedic Doctors.)