What is the Keshav name correct meaning

Namaste Sajjanas, how are you doing today? Bhagavan Keshava blessings to you and your family!

Keshava is one of the famous names of Bhagavan Sri Vishnu.

Now, let us break the name Keshava and let us understand it’s meaning:

Keshava = Ka + Isha + Va = This name is the origin and governing Bhagavan / Ishwar of Sri Brahma Deva + Rudra Deva (Lord Shiva) and all the Devatas / Demigods. 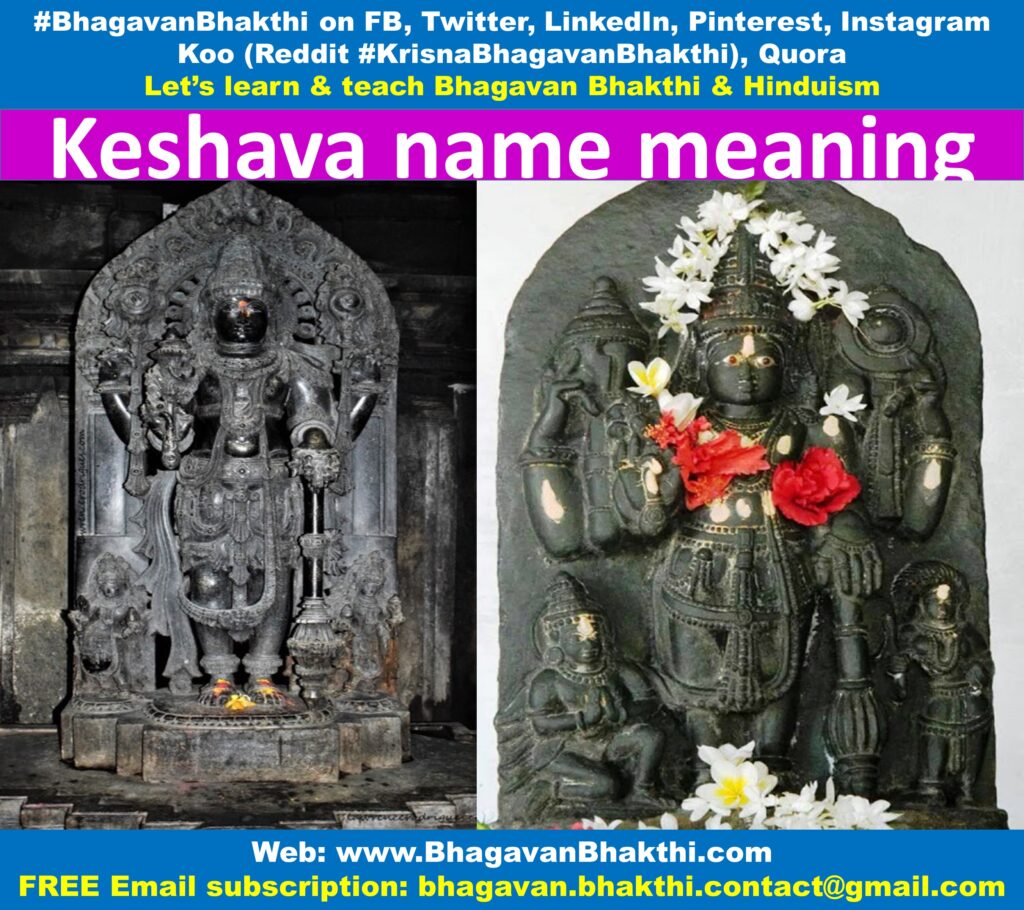 Kesa (Kes) is a Sanskrit word which means hair (Even in many Indian languages we use this word for hair).

Keshava also has the meaning someone who has got a long and beautiful golden color hair, whose hair is very charming, filled with ultimage sugandha / fragrance.

Keshava also means, he is someone who completely destroys his and his devotees’ enemies.

Also Keshava means, someone who’s continuous chanting removes sorrows and sufferings from his devotees (remover of all the klesha).

Without chanting of the word Keshava, that is, ‘Sri Keshavaaya Namaha’, none of the Vedic rituals begins as per the Sanatana Dharma Shastras.

Keshava means, he is the one who is the slayer of asura / demon Keshi and hence is referred as Keshiha in Vishnu Sahasranama. 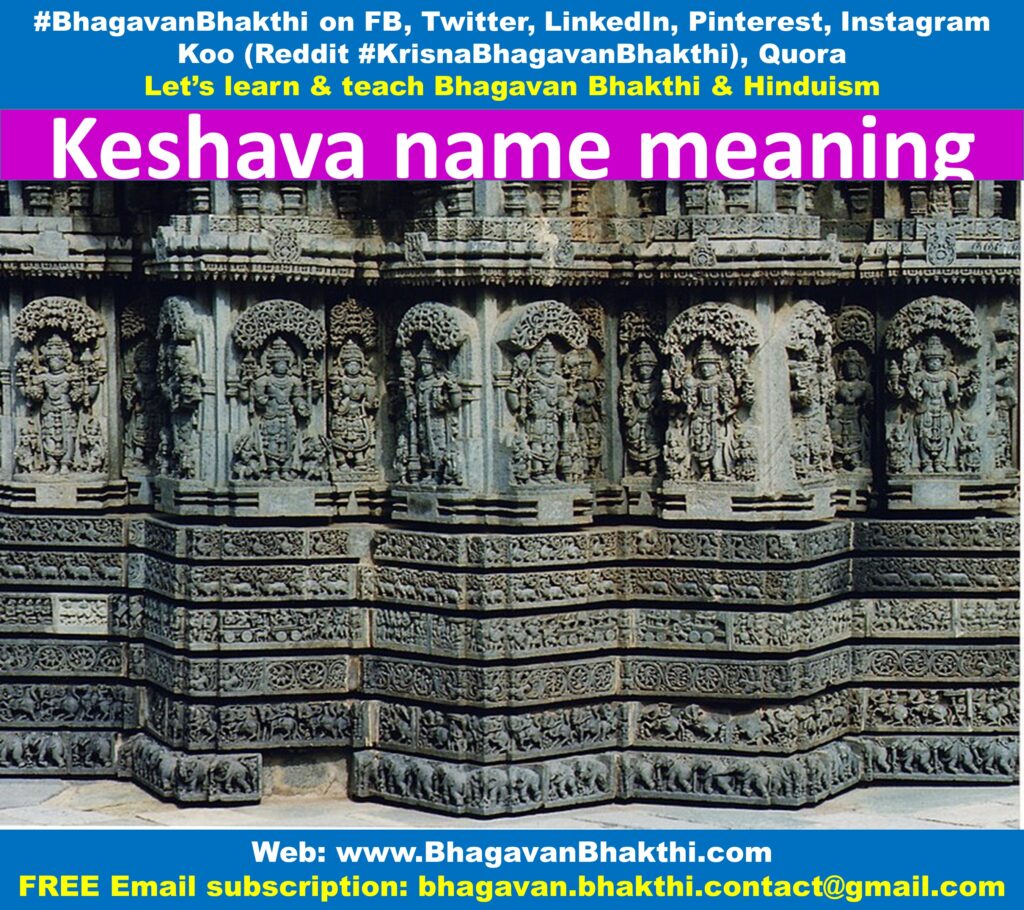 Keshiha has been given in the Sri Vishnu Sahasramana Shloka no. 69.

Bhagavan Sri Krishna is prominently known as Keshava all over the world, not only by Hindus, but also by non-Hindus too.

We find a reference to the word Keshava is shloka no. 3 and no. 69 (See above) of Sri Vishnu Sahasranaama Stotram.

In the symbolism of Bhagavan Sri Vishnu, generally we see Bhagavan Sri Vishnu holding the divine Shankha (Panchajanya) in the left hand and Chakra (Sudarshana) in the right, whereas in the Keshava form, the ‘Aadi Chaturvimshati Roopas’ (Original 24 forms) it has interchanging Shanka and Chakra.

The ‘Chaturvimshati Roopas’ (24 forms) of Bhagavan Sri Vishnu with his divine consort (wives) names are as given below: 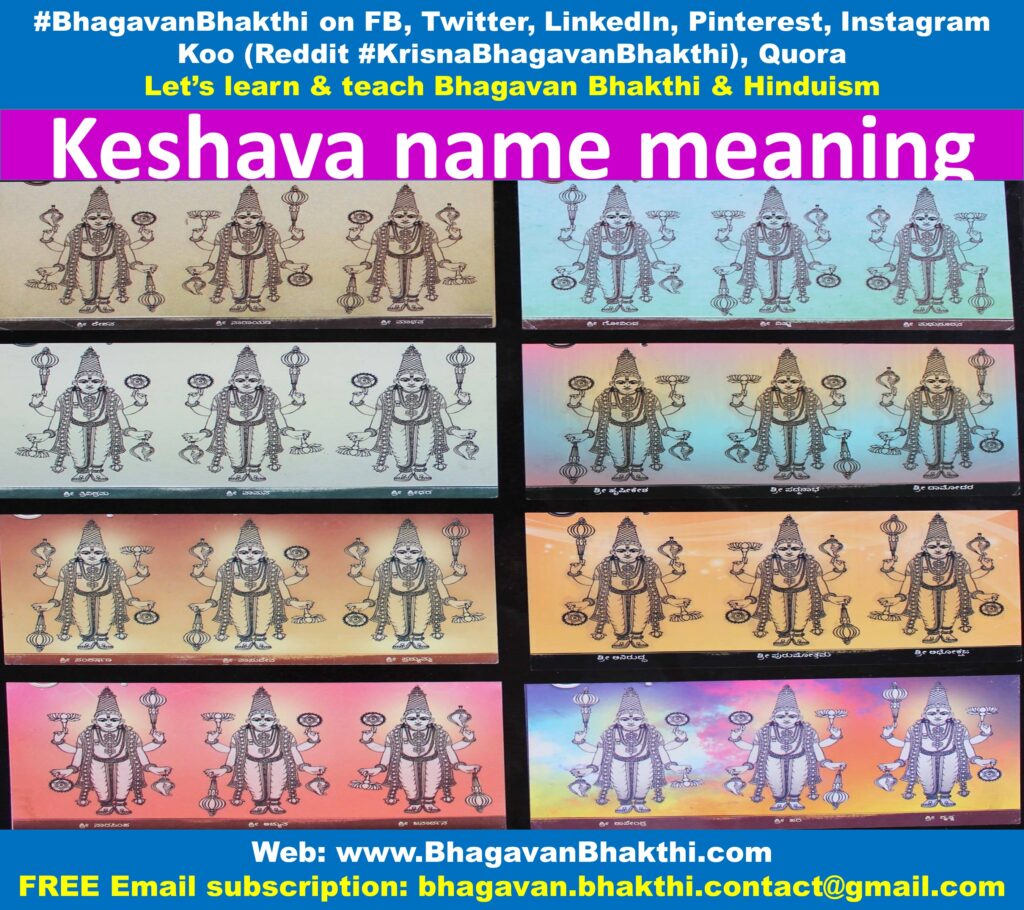 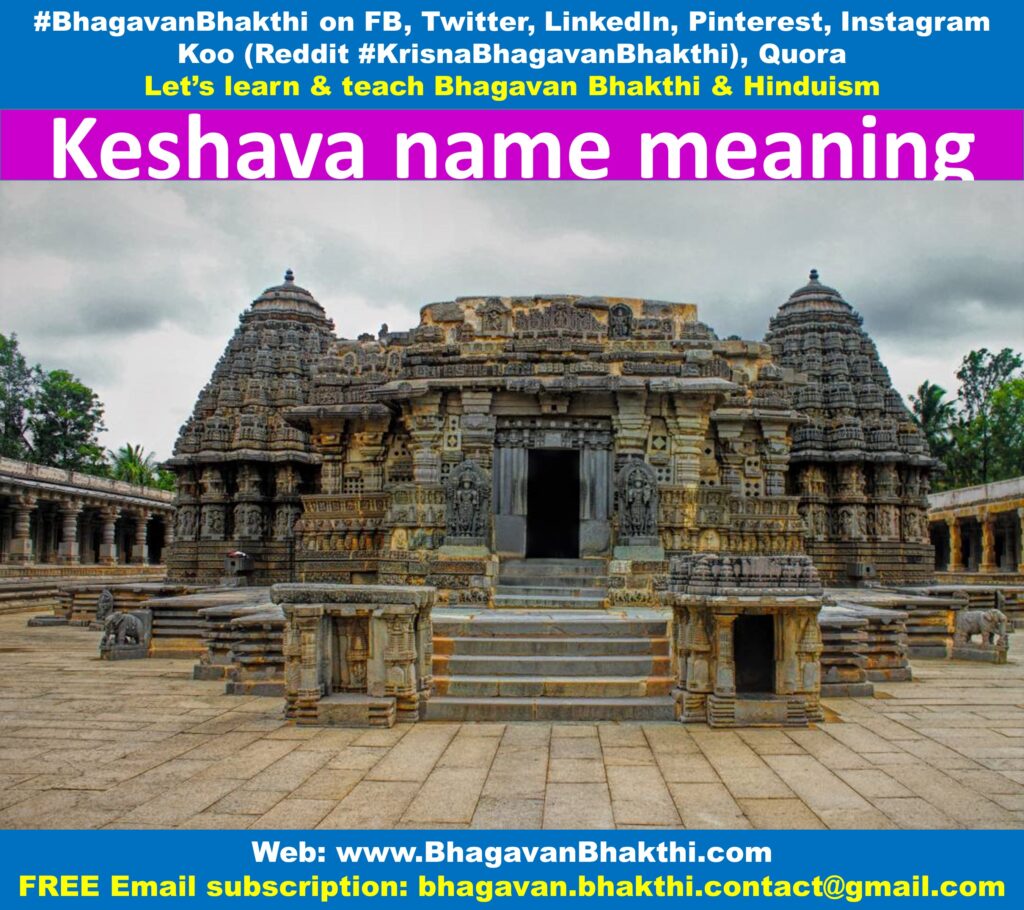 As the rain water that falls down from the sky finally reaches the Ocean, similarly doing the regular and continuous worship of any Devatas / Demigods ultimately reaches the Sarvottama / Supreme Bhagavan Keshava (Bhagavan Sri Vishnu / Krishna). 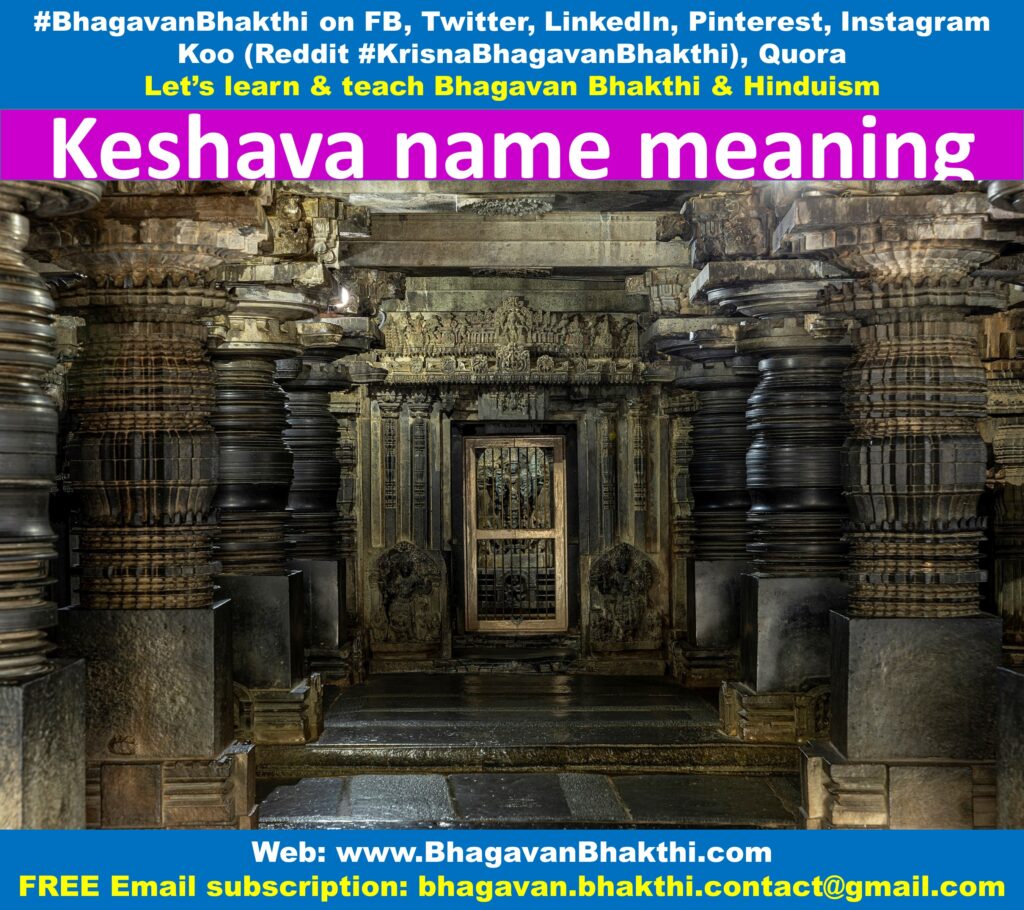 Thus, whatever the divine work we do, we need to do ‘samarpana‘ to Bhagavan Keshava (Bhagavan Sri Vishnu / Krishna) by saying the following shloka from Sri Vishnu Sahasranama (From Phala Shruti):

After telling the above shloka we should always end any divine work by saying the below:

Only after saying the above, all the divine works which has been done by us will reach Bhagavan Sri Vishnu / Keshava / Krishna.

To know stotras of Bhagavan Sri Vishnu, Rama, Krishna and other Devatas, please visit the below link:

Stotras of Bhagavan Sri Vishnu, Rama, Krishna and other Devatas

To know “Goddess Lakshmi Shlokas (stotras) with meaning in Sanskrit, Kannada and English”, visit the below link:

To know “What are Goddess Lakshmi names in different avatars along with Lord Hari’s names”, visit the below link: