Bhagavan Sri Vishnu took the avatar of Bhagavan Sri Rama as the 7th avatar, whereas the other avatars are: 1st is Sri Varaha Swamy, 2nd is Narasimha Swamy, 3rd is Sri Matsya, 4th is Sri Kurma,

5th is Sri Vamana, 6th is Sri Parashurama, 7th Sri Rama, 8th is Sri Krishna, 9th is Sri Buddha and 10th will be Sri Kalki (This avatar will happen at the end of Kali Yuga). 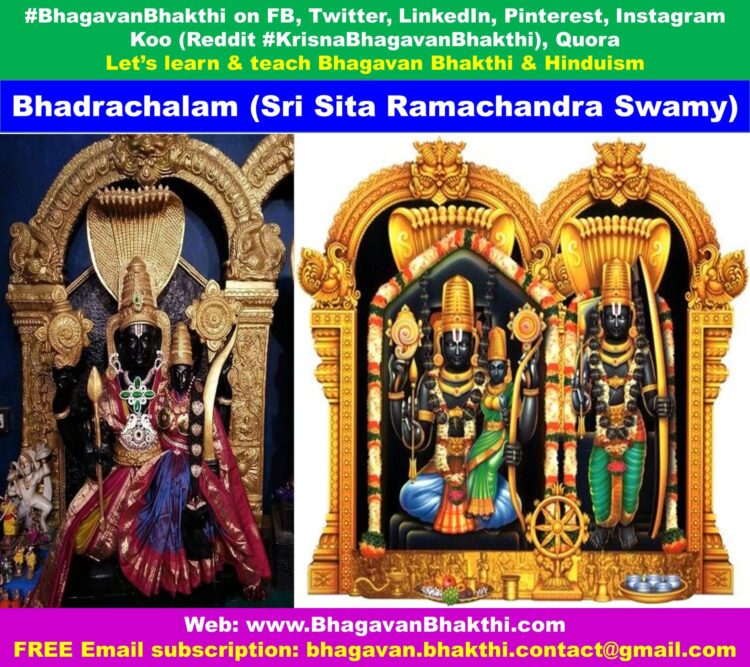 The divine Bhadrachalam Sri Sita Ramachandra Swamy temple is located on the banks of the Godavari River in the auspicious town of Bhadrachalam in east Telangana, India.

This temple is usually referred to as Bhadrachalam or Bhadradri and the temple is considered one of the Divya (Divine) Kshetrams (Pilgrimage place) of Godavari and is also revered as Dakshina Ayodhya (South Adyodhya).

Legend of Bhadrachalam or Bhadradri

As per legend, Bhagavan Sri Vishnu in order to fulfill the promise (Which He forgot – Remember that this is just a drama done by Bhagavan Sri Rama, as he can’t forget anything) given to his devotee Bhadra (son of Meru Parvata / Mount Meru) during His avatar as Bhagavan Sri Rama.

And brother Sri Lakshmana (An avatar of Sri Aadi Shesha Naga) at this place on Bhadradri hills, and got himself manifested there at the request of his devotee Bhadra.

Thus, this place became a divine place and came to be known in the name of his devotee Bhadra as Bhadrachalam or Bhadradri.

The most divine place where the temple has been constructed is the same place where Bhagavan Sri Rama had lived along with his loving consort Sri Sita Devi during His exile in Dandakaranya on the banks of the pious river Godavari.

(Here Dandakaranya / दंडकारण्य / ದಂಡಕಾರಣ್ಯ / daṇḍakāraṇya is a place starting from the present Madhya Pradesh and continues up to the tip of south India. This whole place is highly pious place and completely belongs to Bhagavan Sri Rama.)

The uniqueness of this most divine temple is that the Bhagavan Sri Vishnu in his hurry to fulfill the promise given to his devotee Bhadra, came to give darshan (Divine view) carrying his Disc Sudarshana Chakra and his Conch Panchajanya Shankha in apasavya (On the other side) position.

Another uniqueness of this most divine temple is, normally Bhagavan Sri Sri Rama is depicted with only two hands, that is, one hand with a bow and another hand with an arrow.

While on the contrary, here Bhagavan Sri Rama is propitiously seen with Chaturbhuja (Divine four hands) holding Disc Sudarshana Chakra and Conch Panchajanya Shankha in his upper arms, and whereas bow and arrow in his lower arms with his lower right hand in abhaya mudra / abhaya hasta (Giving assurance of safety to his devotees). 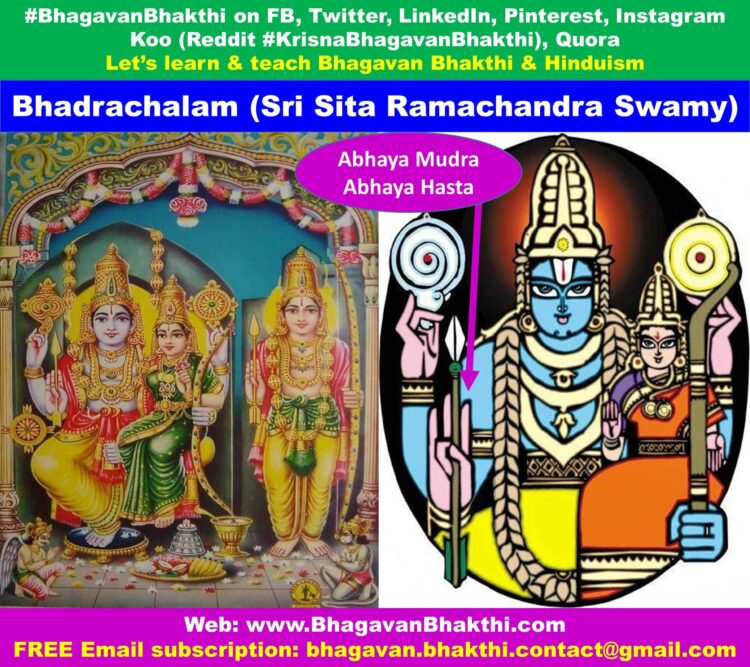 There is also another very divinely popular legend attached to this most divine temple.

Rama Dasu constructed the temple at Bhadrachalam (It’s temple and not deity) and arranged for ornaments to the Bhagavan Sri Sita Ramachandra. 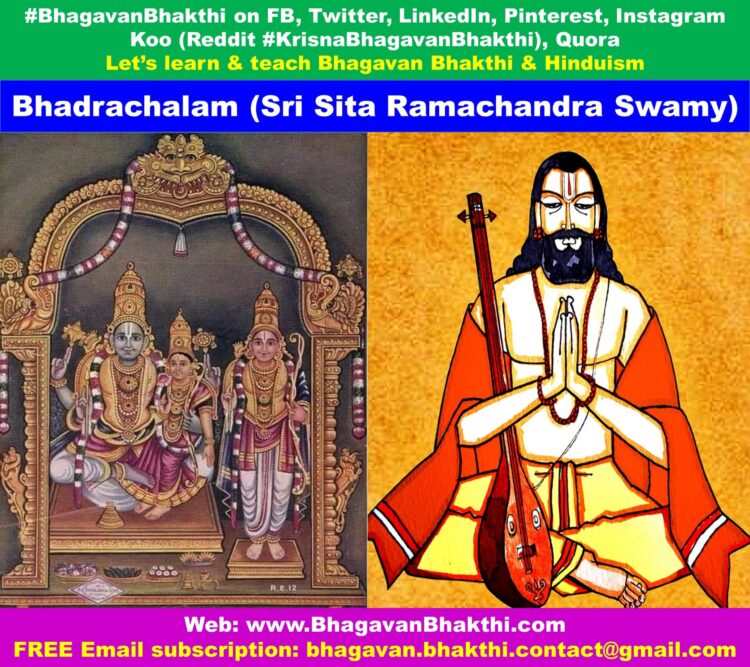 During this time, Rama Dasu was working as a Tahsildar (Head of the town) under the Kingship of Abdul Hassan Thanisha, that is, the Nawab of Golkonda under Nizam dynasty.

At this particular juncture, Ramadasu had arranged for funds from the revenues collected for which he had to undergo imprisonment for 12 years. This happened due to pilfering of State funds and was kept in Golkonda jail by the Nawab.

Even today one can see the proof of his imprisonment in Golkonda fort at Hyderabad and the life spent by Bhakta Ramadasu in jail.

Being a divinely and pious loyal devotee of Bhagavan Sri Rama, the money spent by Ramadasu for the temple at Bhadrachalam was rightly repaid to the Nawab by directly Bhagavan Sri Rama Himself who came in disguise.

Money remitted back was as high as six lakh Gold gold mohars (coins) and it was called as Rama Tankas having the divine symbol of Bhagavan Sri Rama as his Sri Rama Pattabhishekam image carved on the coins which can be seen even today.

(image courtesy as mentioned in the picture)

The legend proves that, Bhagavan Sri Rama always comes to the rescue of his real devotees though initially they might have to endure due to their earlier Prarabdha Karmas (Earlier Karmas).

The most divine Bhadrachalam or Bhadhadri temple is located at Bhadrachalam in Khammam district of the present Telangana state.

Bhadrachalam is about 300 km from Hyderabad and is sited on the banks of holy river Godavari called Goutami Ganga (Also known as Dakshina Ganga / Southern Ganges – Daughter of Goutama Maharshi – Another name of Ganga Devi).

Bhadrachalam temple is devoted to Bhagavan Sri Sri Rama. The divine temple of Bhadrachalam is also called as Dakshina Ayodhya (Southern Ayodhya) and is one of the highly important pilgrim places South India and especially Telangana. 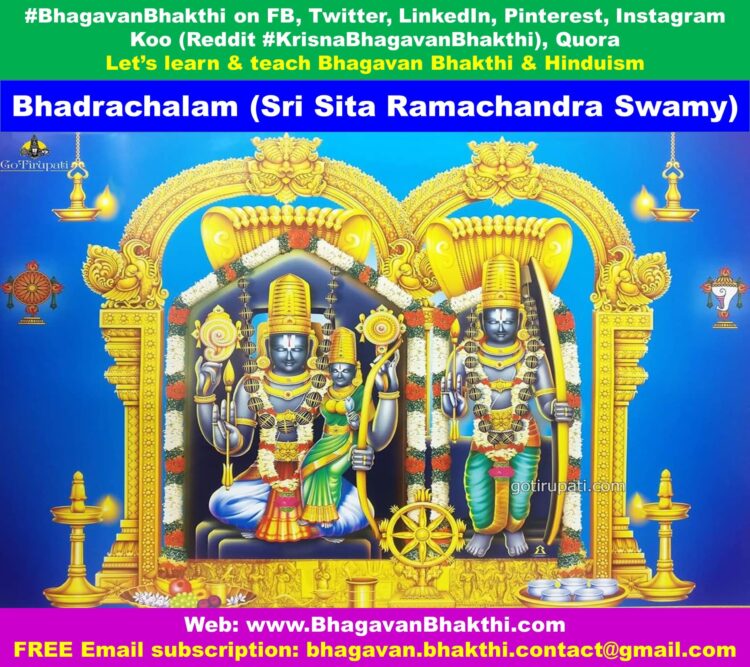 As said above, Kancharla Gopanna is famously called as Bhakta Ramadasu (A devotee of Rama – Rama + Dasu) was a 17th century devotee of the Bhagavan Sri Rama,

Ramadasu was a famous Vaggeyakara (Classical composer) from the Telugu classical period.

Kancharla Gopanna (Ramadasu) was born in the a small village called Nelakondapalli in Khammam district, and orphaned as a teenager.

Ramadasu spent his later years in Bhadrachalam and as said above was in jail 12 years in solitary confinement at the Golconda prison during the Qutb Shahi-rule.

Ramadasu is celebrated personality for constructing the divinely auspicious temple of Bhagavan Sri Rama, that is called as Sri Sita Ramachandra Swamy Temple.

This is one the highly pious and supremely respected pilgrimage center on the banks of river Godavari at Bhadrachalam.

Ramadasu’s devotional kirtanam (Divine songs) lyrics to Bhagavan Sri Rama illustrate the classical Pallavi, Anupallavi and Caranam category composed mostly in Telugu, whereas some are in Sanskrit and with very few in Tamil language. 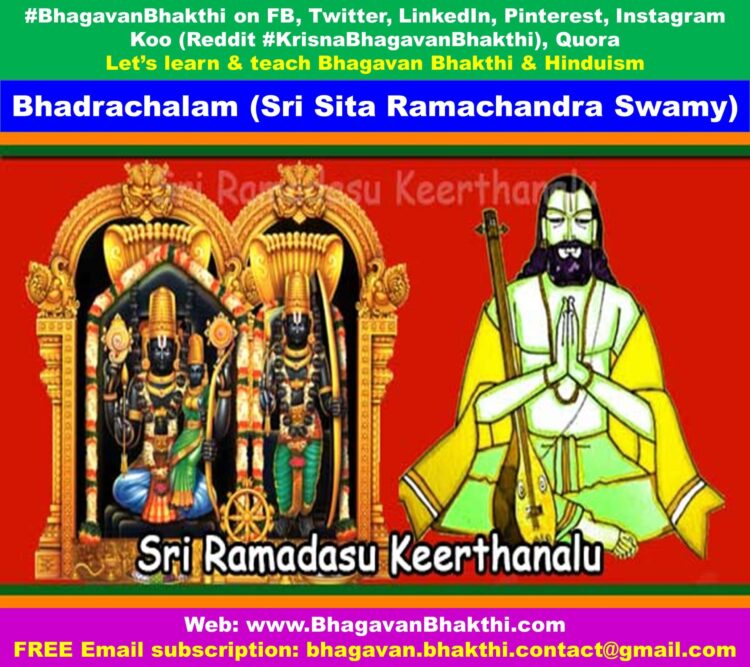 Ramadasu’s songs continue to be sung at the Sri Sita Ramachandra Swamy Temple in Bhadrachalam even today.

To know more about Bhagavan Sri Rama, click the below link:

To know more about Bhagavan Sri Krishna, click the below link:

Continue reading on Bhagavan Bhakthi website by clicking the below link: