Dharma, Artha, Kama and Moksha are the four caturbhāva (Chaturbhavas) and they are known as Chaturvidha Purusharthas in Hinduism.

Here Chatur Bhava is one of the names of Bhagavan Sri Vishnu as mentioned in Sri Vishnu Sahasranama (Shloka 82 – We will see the meaning below). He is the reason for Dharma, Artha, Kama and Moksha. This means, Dharma = Doing duty as per the Sanatana Dharma. Artha = Ultimate divine wealth. Kama = Desire. Moksha = Divine liberation.

Chaturvidha Purusharthas means – Chaturvidha = Four + ways. Purusharthas = Human efforts (Many must have heard in olden days people asking, what is your Purusharthas? This means, what efforts have you done to complete that particular job / work.

Hinduism (Sanatana Dharma) is so unique and only one Dharma on this earth, that you can’t find another Dharma which is even close to Hinduism in any respect. 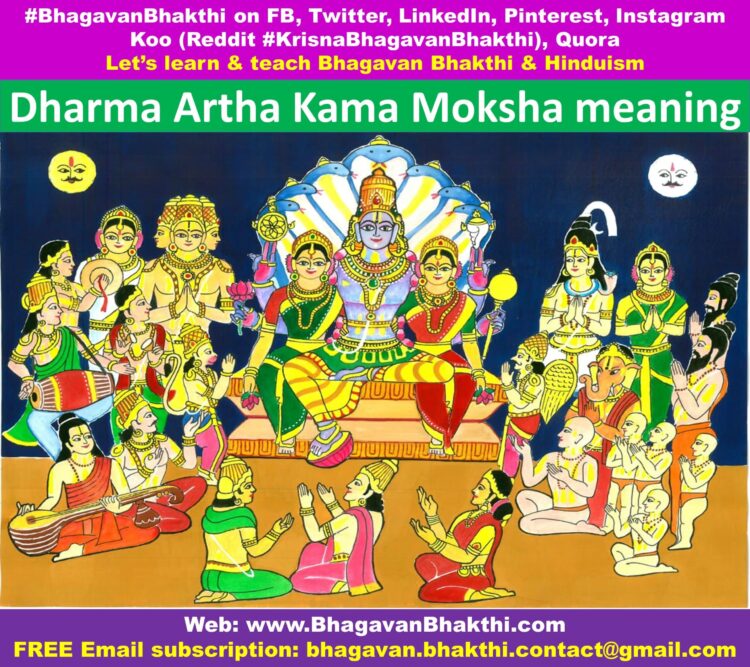 As said above, ‘caturbhāva’ (Chaturbhava) is one of the names and also the quality of Bhagavan Sri Vishnu.

In Sri Vishnu Sahasranama Shloka 82 it is said that:

Now, let us take these Chaturbhavas (Dharma, Artha, Kama and Moksha) one by one and understand the real meaning of all:

Dharma is so called by that name, because it holds the truth. Dharma alone holds the people, righteousness, cosmic law, divine rules & regulations, reality, etc.

The word Dharma is derived from the root dhr̥ / Dhr, that is, to hold the people, righteousness, cosmic law, divine rules & regulations, reality, etc and its etymological meaning is ‘that which all holds’ this universe and / or the people of the world, or the whole creation from the miniature to the macrocosm.

Thus, practice of Dharma, means recognition of this Law made by Bhagavan Sri Vishnu and obeying by it.

No language on this earth is as perfect as Sanskrit. 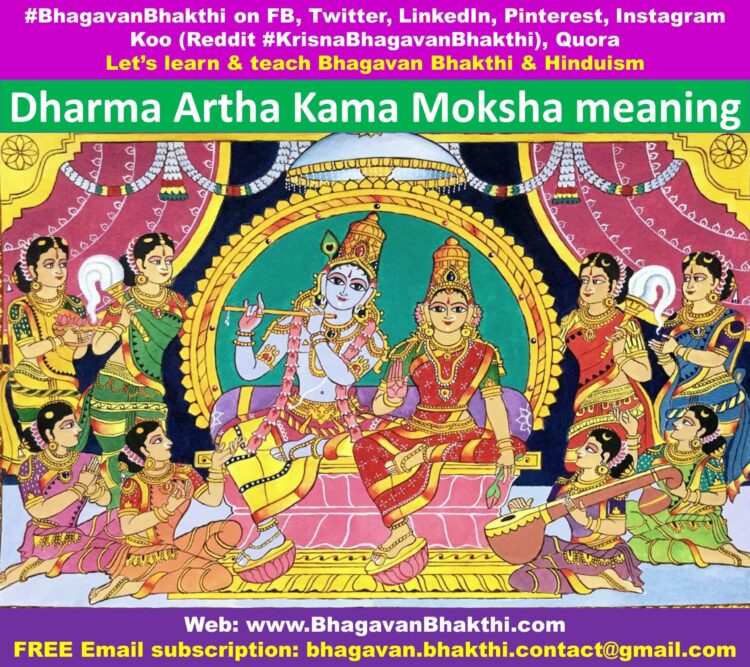 The great grand father of Hinduism, Bhishma says in his instructions to Yudhishthira that:

A. “Whatever creates conflict is Adharma, and whatever puts an end to that conflict and brings about unity and harmony is Dharma.”

B. “Anything that helps to unites all and develop pure divine love and universal brotherhood is Dharma. Anything that creates conflict, split and disagreement and foments hatred is Adharma.”

C. “Dharma is the cementer and sustainer of social life.”

D. “The rules of Dharma have been laid down for regulating the worldly affairs of humans”.

E. “Dharma brings as its consequence happiness, both in this world and in the next (Upper planets).”

F. “Dharma is the means of preserving one’s self. If you offence it, it will kill you. If you protect it, it will protect you. That’s why in Sanskrit there is a famous saying, “Dharmo Rakshati, Rakshitah”.

G. “Dharma is your sole companion after death. It is the sole refuge of mankind.”

Let us consider few shlokas from the most divine Srimad Bhagavad Gita which talks about Dharma:

For the protection of all the Bhagavan Sri Vishnu devotees, for the annihilation / complete slaying of people who are against Dharma and to re-establish I (Bhagavan Sri Vishnu) incarnate from time to time (again and again).

Here we should  always keep in mind that, Bhagavan Sri Krishna is telling that ‘Yuge Yuge’, this means from time to time (again and again) and not just every Yuga (Like Satya Yuga, Treta Yuga, Dwapara Yuga and Kali Yuga). 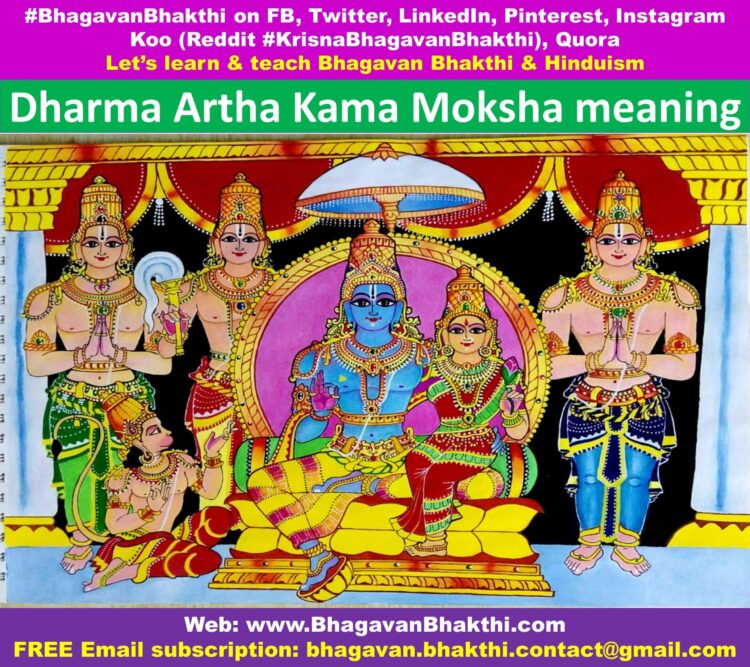 Whenever there is a decline in Dharma (Righteousness) and an augmentation in Adharma (unrighteousness), O Arjuna, at that time I (Bhagavan Sri Krishna) will definitely manifest myself on this earth every time and again and again.

When there is destruction of any dynasty, all its traditions get annihilated, and the rest of the family becomes involved in irreligious practices. 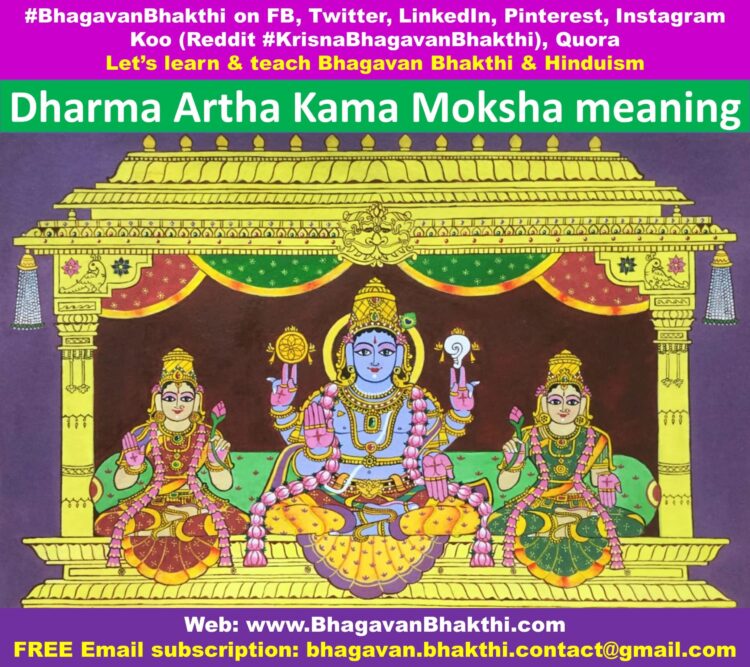 From all the above Srimad Bhagavad Gita shlokas, it is very clear that Dharma has different meaning and one needs to have a long term association with Hindu grantas (Hindu divine books) to understand the correctness of the word Dharma.

To understand in simple words, whatever Bhagavan Sri Krishna (Vishnu) tells is itself is Dharma. What he says is Dharma and what someone does against his words is ‘Adharma’.

Now, let us consider one shloka from Sri Vishnu Sahasranama:

Translation (Only Dharma related translation is given): 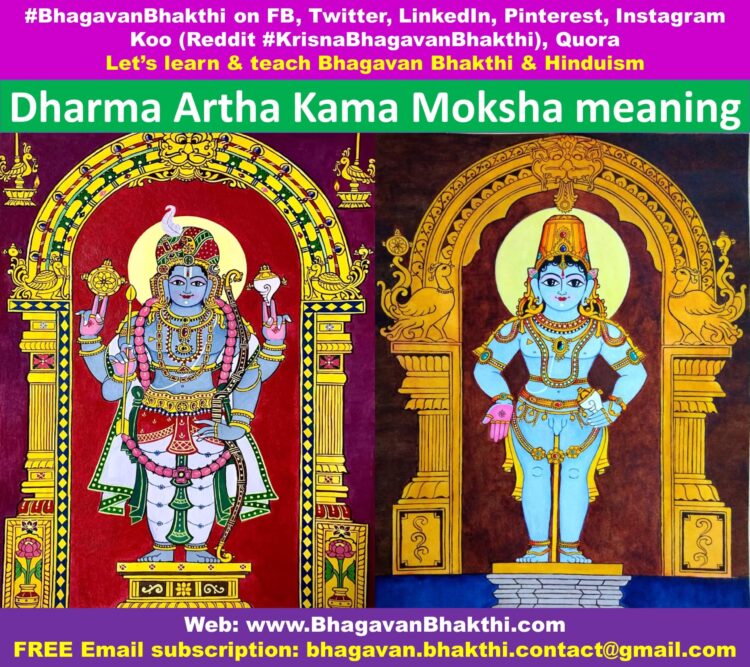 Another shloka from Sri Vishnu Sahasranama:

Translation (Only Dharma related translation is given):

Bhagavan Sri Vishnu he himself is Dharma and the one who bears all the Dharmas and his very nature is doing only dharma works. All his incarnations are for the purpose of Dharma itself. He is a symbol of Dharma and protector of Dharma. He is the best and greatest among the knower of all the Dharma.

1. Among all the four main objects of human aspiration (Purusharthas), that is, Dharma, Artha, Kama and Moksha, Dharma is given the eminent and top most rank in the grantas (Hindu divine books).

3. Also, Dharma alone is the principal Purushartha. Dharma is the grand first and most major Purushartha.

4. Through the practice of the divine Dharma alone, one can easily hope to achieve the crowning glory of all human endeavors, that is, the Moksha (Divine liberation) which is the best and the highest of all desirable things.

5. Practicing the divine Dharma on daily and regular basis, leads to the perfect realization of essential union or the final end, the top most goodness, that is, Moksha (Divine liberation).

7. The person practicing Dharma becomes thoroughly disciplined. His / her powers and capacities are exceedingly intensified. He / She realizes that there is one underlying homogeneous essence, a living truth, behind these names and forms.

6. The Dharma practitioner is transmuted into divinity. His / Her whole way of living gets divinely transformed. He / She becomes one with the Eternal bliss.

Dharma can be classified under two groups as given below:

The different characteristics of Dharma according to Manu Dharma assumes various kinds as given below:

i. Purusha Dharma (Duty of male),

“अर्थः / ಅರ್ಥಃ / arthah / Arthah” (This means ‘He is the Artha’ – Here He means Bhagavan Sri Vishnu) generally gives a meaning of wealth which for few gives only materialistic explanation.

But the real meaning here in a supreme spiritual sense, ultimate wealth for a soul is Bhagavan Sri Vishnu himself, which is eternal and permanent. He is the ultimate wealth (Arthah) every soul would be longing to have doing different penances, austerities etc.

Arthah also is known as ‘meaning’. Bhagavan Sri Vishnu is the only real, ultimate meaning of everything in this unlimited universes.

Bhagavan Sri Vishnu himself is the Arthah, that is, the giver of wealth and also paramārtha, that is, ultimate, superior wealth (Both materialistic and spiritual).

Another meaning that we can understand is, Anarthah is opposite of Arthah.

Bhagavan Sri Vishnu doesn’t need any material or spiritual wealth. He is free from both material and spiritual effects. He is called as Vashatkarah, that is,

Bhagavan Sri Vishnu is the one who possesses qualities like:

A. All capabilities to do and undo anything and everything of anyone or anything;

B. Thorough control over anything and everything (Including sovereignty, lordship etc.);

C. He is called as ‘Yashash’ (Can easily accomplish anything and everything);

D. He knows all the material and spiritual knowledge in ample form;

E. He is completely dispassionateness (Non attachment); and

Bhagavan Sri Vishnu is free from all imperfections.

Bhagavan Sri Vishnu is the possessor of all auspiciousness, best and unlimited number of features, six of which are jnana (Knowledge), bala (Strength), aishvarya (Wealth), viirya (Heroism), shakti (Power), and tejas (Brilliance).

kāmakr̥t: Bhagavan Sri Vishnu is the one who fulfills all desires of his devotees (Both material and spiritual).

kāntaḥ: Bhagavan Sri Vishnu who is of enchanting form.

kāmaḥ: Bhagavan Sri Vishnu is the most beloved one.

kāmapradaḥ: Bhagavan Sri Vishnu is the one who supplies all the desired objects of his devotees.

prabhuḥ: Bhagavan Sri Vishnu is such kind of Bhagavan (One who fulfills all the above wishes of his devotees).

In another shloka of Sri Vishnu Sahasranama, Bhagavan Sri Vishnu is known as:

kāmadēvaḥ: Bhagavan Sri Vishnu is the the beloved Lord, viz, He is the one who is desired by devotees in quest of the four values of life that is, chaturvidha purusharthas – Dharma, Artha, Kama and Moksha.

kāmī: Bhagavan Sri Vishnu is someone who has fulfilled all His desires, that is, he is the one who by nature has all his desires fulfilled. (His desires are not for material enjoyment or luxuries, He is Vashatkaara).

kāntaḥ: Bhagavan Sri Vishnu is the one who is having the enchanting form.

kr̥tāgamaḥ: Bhagavan Sri Vishnu is the author of the agama scriptures.

Out of the three PurushaArthas, that is, Dharma, Artha and Kama in Mahabharata Bhimasena says that Kama is most superior.

Translation: A person who does not have desire at all, will never ever desire even for moksha.

Bhagavan Sri Vishnu is called as Moksha and also the giver of Moksha.

muktānāṁ paramāgatiḥ : Bhagavan Sri Vishnu’s lotus feet and the Vaikuntha is the ultimate abode and most desired place where every divine atma / soul will be longing to go and stay eternally.

Giving Moksha is the prerogative of Bhagavan Sri Narayana / Vishnu. He is the one and the only one to grants Moksha (Divine liberation) to his deserved devotees.

Sri Vishnu Sahasranama is one of the most magnificent, meaningful stotram, it an essence of all the four Vedas, it is a gift to the humanity carved out from Panchama Veda (Fifth Veda), that is, Mahabharata.

Translation: Bhagavan Sri Vishnu is the only who has all the complete infinite number of qualities, which non-other Devata / Demigod has.

As per our grantas (Hindu divine books), Bhagavan Sri Vishnu is the only source and from whom originated are, the four great human values, that is, Dharma, Artha, Kama and Moksha.

Bhagavan Sri Vishnu is the Sarvottama / Supreme Dharma and ultimate Tattva and worshiping Him with proper अनुसंधान / ಅನುಸಂಧಾನ / anusandhāna / Anusandhana (As said in grantas / Hindu divine books) will yield his devotees full of both material and spiritual fruits.

To know more about Bhagavad Gita, please visit the below link:

To know more about Bhagavan Sri Vishnu, kindly visit the below link: