Is Rama God or NOT? (Rama unknown facts)

Sri Rama, that one name is enough for us to get the moksha / mukti (Divine liberation) and free us from this Sansar (worldly things).

Sansar is different from Parivar. Sansar means from the time we take birth and until our death comes. Whereas, Parivar means our family like father, mother, wife, husband, children, etc. 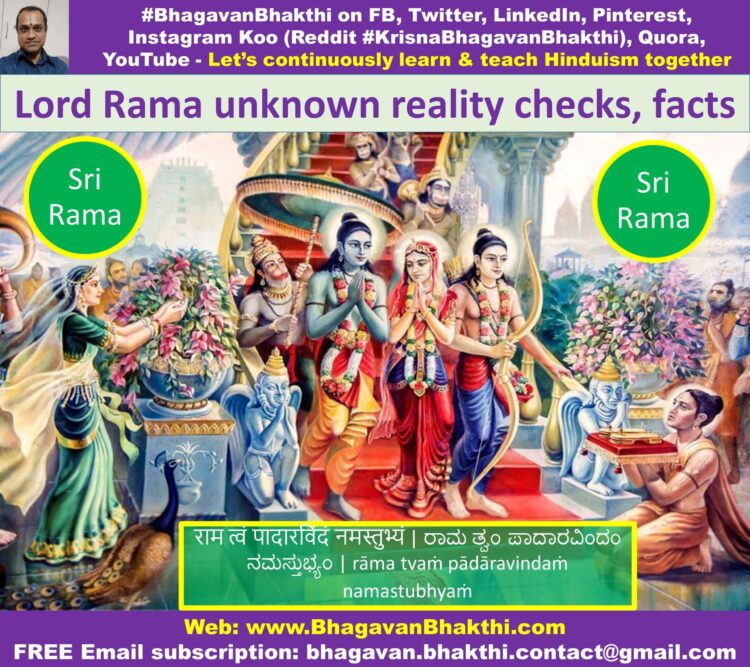 We should always remember that, there is no difference Lord Vishnu and his different avatars like Lord Rama, Lord Krishna, Lord Parashurama, etc. etc. etc. All are one and the same.

If we chant Bhagavan Sri Vishnu’s one or more names like Rama, Krishna etc., we will definitely gain both bhoutika (worldly) and adhyatmika (spiritual) things, this is 100% guaranteed.

Sometimes, it may take more time for few people, this could be because of our earlier Karmas (Earlier lives, this life’s, etc. Karmas).

Now, let us know “List of points which proves Lord Rama is God or NOT”.

List of points which proves Lord Rama is indeed God (unknown facts) are as given below:

Both Bhagavan Sri Vishnu and Bhagavan Sri Rama are the one and the same. There is no difference between them.

Avatar purpose : Dushta Shikshana (For the punishment of the Adharmis / wicked), Shishta Rakshana (For the protection of the Dharmic people) and for Dharma Samsthapana (To re-establish the Dharma). 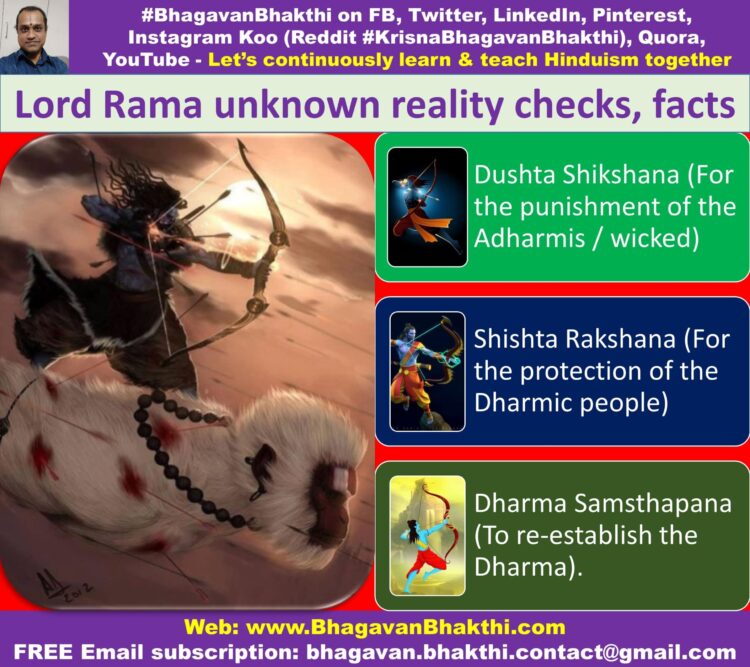 When Lord Rama took birth (Birth Yuga) : In the 24th Treta Yuga in Vaivasvata manvantara, that is, approximately 20,00,000 (2 million) years ago.

At his period, there was no one who could stand against Bhagavan Sri Rama and his Dharma.

Birth place : At Ayodhya (Present U.P., India) on the banks of Sarayu river. 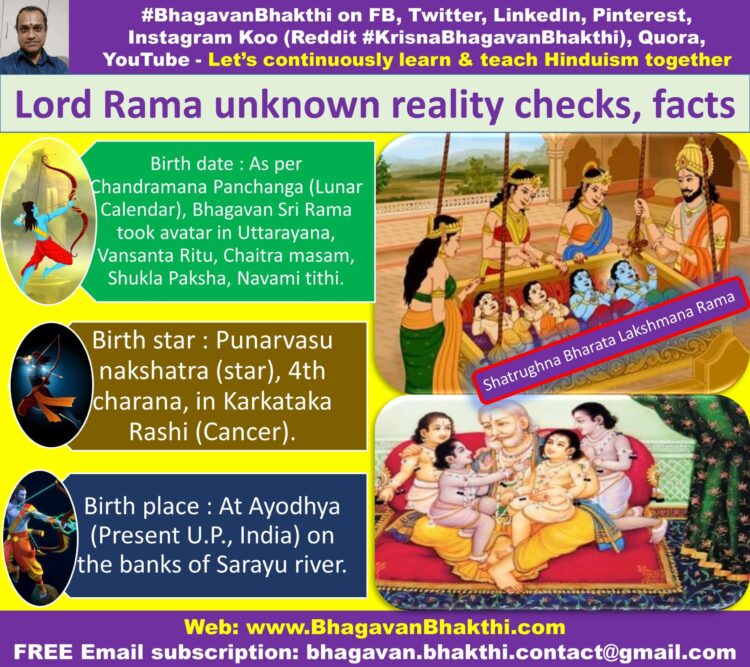 Varna : Among the four Varnas, that is, Brahmana, Kshatriya, Vaishya and Shudra, Bhagavan Sri Rama took avatar in Kshatriya varna. 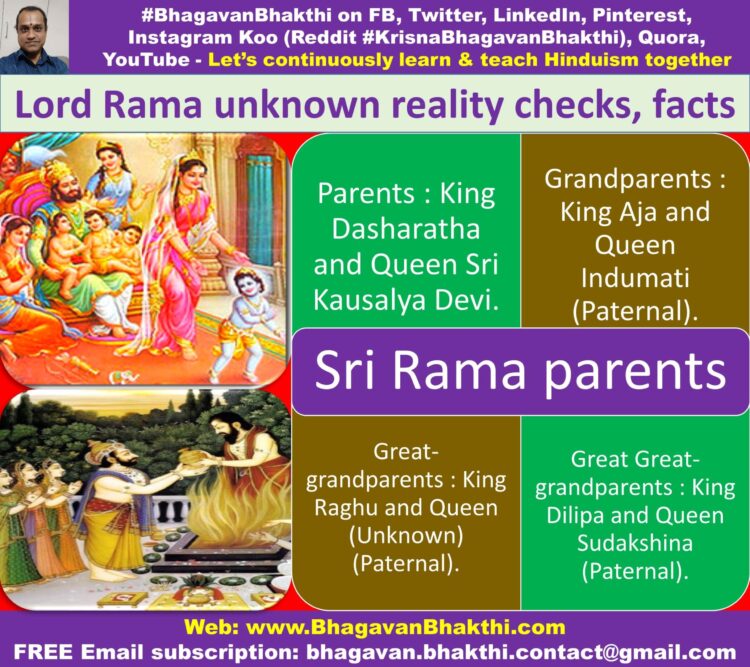 This Yagna (Divine sacrifice) is performed to get child (children).

Wife : Sri Sita Devi. Bhagavan Sri Rama married only Sri Sita Devi and thus he is known as ‘Eka patni vratastha’, that is, married to one and only single wife.

Marriage mode : Got married to Sri Sita Devi by participating in Swayamvara. Swayamvara is a ritual in early Hinduism, in which bride with full independence can choose her life partner as per her wish.

Bhagavan Sri Rama broke the Shiva Dhanush and married Sri Sita Devi as per her wishes. 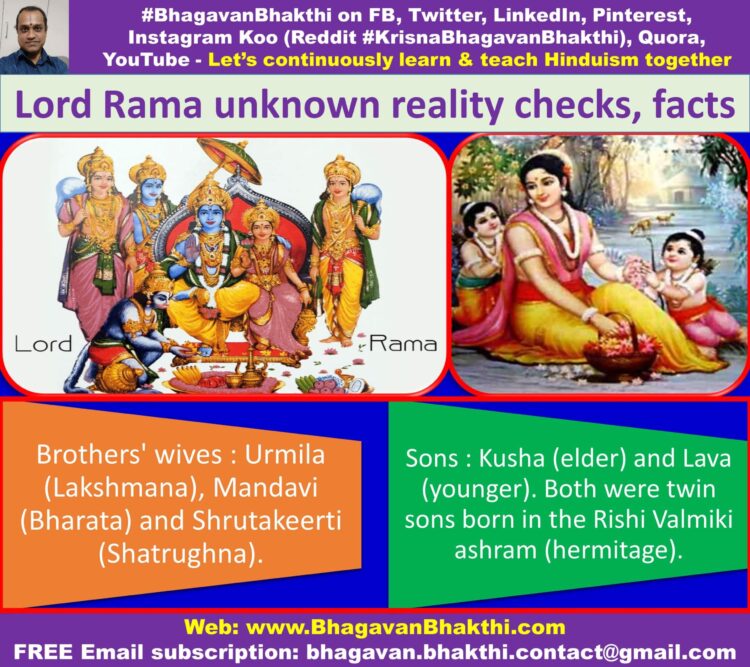 Meeting of Rama and Hanuman : At a place called Rishyamukha mountain in Kishkinda, Bhagavan Sri Rama meets his most beloved devotee Hanuman.

(Kishkinda is present in the north Karnataka state, that is, now it is called as a place called Hampi).

Person responsible for forest exile : Kaikeyi listening to the words of her maid Manthara, forced her husband Dasharatha to tell his elder son Bhagavan Sri Rama to go for exile, so that her son Bharat can become the King of Ayodhya (Kosala).

[Manthara is the original ‘Alakshmi’, that is, wife of Kali (Kali Yuga’s Kali). Kali was born as Duryodhana during the Dwapara Yuga (Mahabharata period)]. 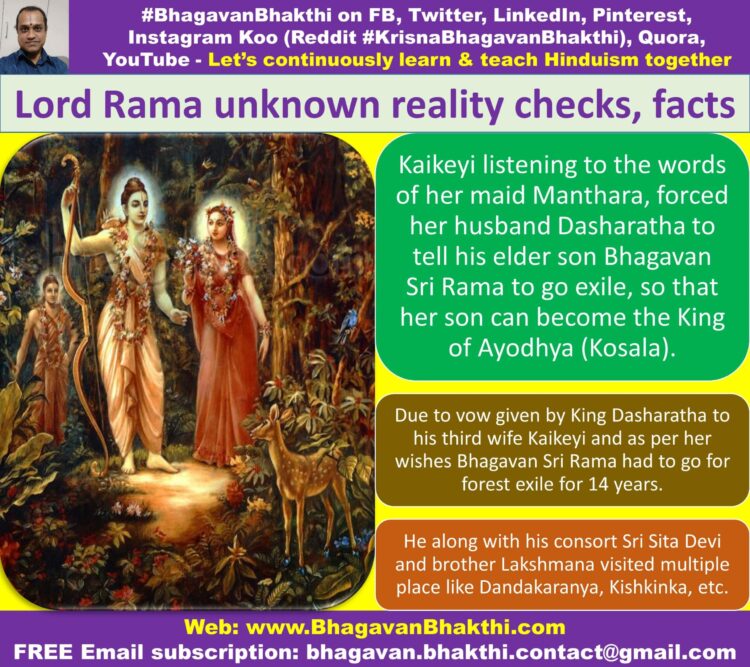 Forest exile life : Due to vow given by King Dasharatha to his third wife Kaikeyi and as per her wishes Bhagavan Sri Rama had to go for forest exile for 14 years.

He along with his consort Sri Sita Devi and brother Lakshmana visited multiple place like Dandakaranya, Kishkinda, etc.

Met Sugriva, Hanuman at Rishyamukha. Killed many demons and also had to slay Vali due to his Adharma works. Finally killed the King of Lanka Ravana.

Rama setu : A bridge was constructed near today’s Rameshwaram and was named as ‘Rama Setu’ (Today it is called as Adam’s bridge) to reach Lanka (Today’s Sri Lanka).

Nala was the architect of this bridge ‘Rama Setu’ (Nila is also credited and considered as an engineer, but this is not given in Valmiki Ramayana).

Nala was an avatar of the Demigod’s architectural engineer ‘Vishwakarma’.

End of Rama avatar on earth : After ruling the whole world for 11,000 years and as per the request by Sri Brahma Deva and other Devatas (Demigods), Bhagavan Sri Rama ended his journey on earth and returned back to his most divine abode of Vaikuntha. 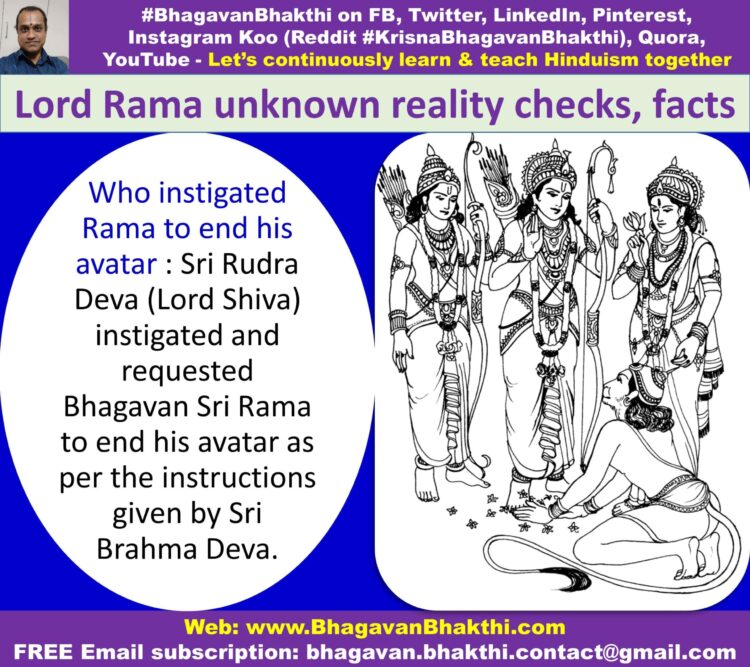 In turn Devarshi Narada narrated the same to Rishi Valmiki. Finally, Rishi Valmiki rewrote this epic which has 7 Khandas, which comprises of 24,000 shlokas.

Valmiki Ramayana : As said above, Valmiki Ramayana contains 24,000 shlokas with 7 Khandas and this version of Ramayana is very brief part when compared to ‘Moola Ramayana’ which contains 100 crore shlokas.

The composer of the ‘Sri Rama Raksha Stotram’ was Budha Kaushika (Also called as Valmiki), a Rishi. This Rishi is different from Valmiki Ramayana’s Rishi Valmiki. 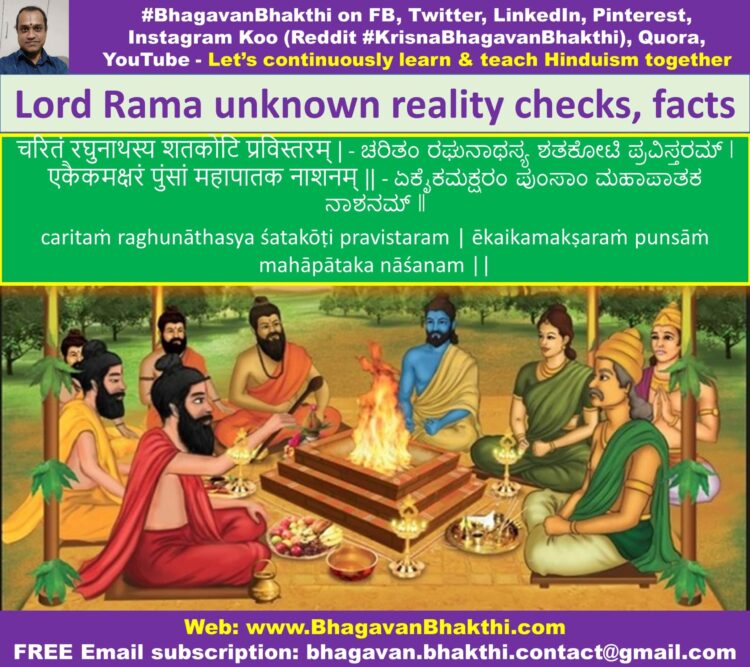 In this stotram it is said that:

Meaning of above shloka (stotram) : The life story (caritaṁ) of Bhagavan Sri Rama (raghunāthasya) is as vast as 100 crore (śatakōṭi) expanse (pravistaram).

If we recite each and every word (ēkaikamakṣaraṁ), it is capable (punsāṁ) of destroying (nāśanam) even the greatest sins (mahāpātaka). 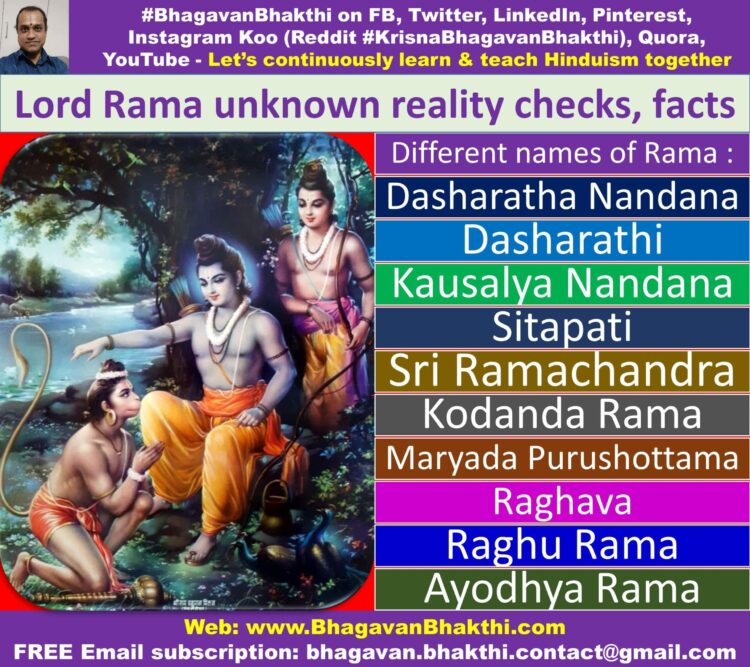 Main enemies of Rama : Ravana and Kumbhakarana. They are the main security guards of Vaikuntha called Jaya (Ravana) and Vijaya (Kumbhakarana).

Due to curse of four Brahma Manasa Putras [Sanaka (Ancient), Sanatana (Eternal), Sanandana (Ever Joyful) and Sanatkumara (Ever Young)], these two had to take birth on earth.

Firstly they took birth as Hiranyakashipu and Hiranyaksha (Slayed by Sri Narasimha Swamy and Sri Varaha Swamy in Satya / Krita Yuga – Both are avatars of Bhagavan Sri Vishnu).

Close friends of Rama : There are unlimited number of friends of Bhagavan Sri Rama. In that, let us know few of them as given here: Sri Sita Devi, Hanuman, Sugriva, Vibhishana, Guha, Lakshmana, etc.

My dear friends, now it is left to you to accept Lord Rama as God or NOT. This is because, Hinduism (Sanatana Dharma) will never forces anyone to accept anything.

To know more about Lord Rama and Ramayana, kindly click the below link: