Namaste friends, how are you doing today? Goddess Durga Devi blessings to you and your family!

Hi friends, let us think out of the box, but as per Hindu scriptures. Many people think of the imaginary Devi(s) known as Adi Parashakti, Om Shakti, etc. as the Durga Devi. Goddess Lakshmi is the last divine Goddess that comes to todays Kali Yuga people’s mind.

We should always remember that, whatever is given in Hindu scriptures has to be followed and never the fictional, mythical, unreal, non-existent, fantasy, etc. type of Gods and Goddesses.

I am not trying to go against anyone’s faith. But, we should always be aware of the real facts as given in the Hindu scriptures.

Just for example, when someone is a student and want to buy one or more authentic text books which is as prescribed by a board. 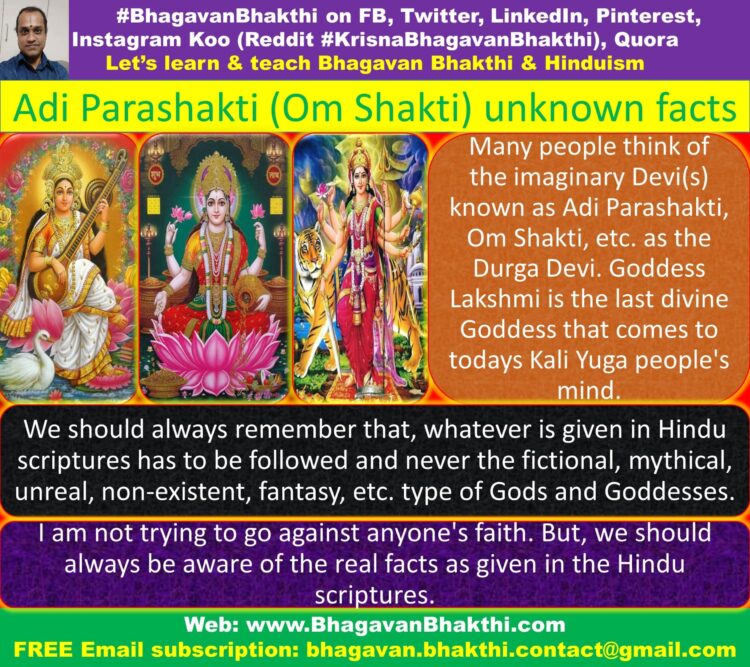 Thus, that student(s) should always get the text books which are prescribed by a board, good teacher (lecturer, professor) and not someone who is a third party person who knows little or limited knowledge about the values of the text books. 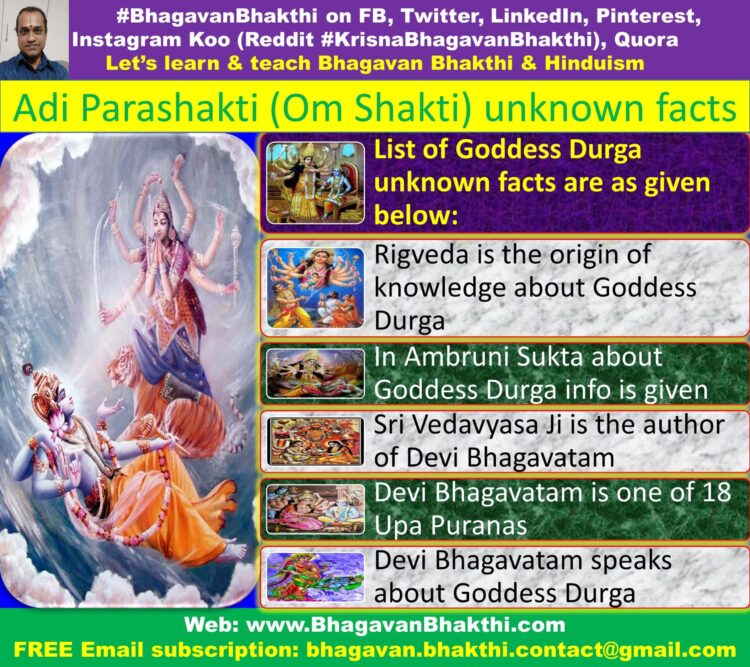 List of Adi Parashakti (Om Shakti) unknown facts are as given below:

Rigveda is the origin of knowledge about Goddess Durga

In Ambruni Sukta about Goddess Durga info is given

Sri Vedavyasa Ji is the author of Devi Bhagavatam

Devi Bhagavatam is one of 18 Upa Puranas

Brahmasutra (2.2.42-45) should be used to negate the imaginary Devis

To about Goddess Durga, knowledge about Vedas, Puranas, Itihasas is a must

Comparison between popular version vs. real version of Nava Durgas

Who is the real Goddess Durga 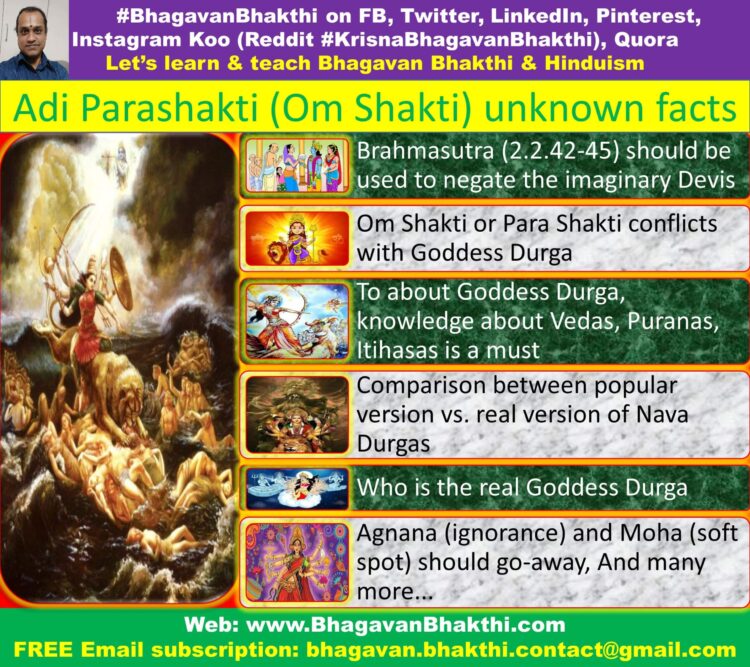 Now, let us move to know more and correct knowledge about Goddess Durga:

Before that, let us know few points about Adi Parashakti or Om Shakti or any such kind of imaginary Devis which is existing in Kali Yuga.

Is Om Shakti or Adi Parashakti is Goddess Durga

Not in one of the Hindu scriptures the names like Om Shakti or Adi Parashakti etc. have been mentioned. This is completely man made and fictitious and 100% imaginary.

The creators of Shaktism belief argue and praise the existence of a primordial Goddess from whom the trimurtis are born, that is, Lord Brahma, Lord Vishnu and Lord Maheshwara (Shiva).

These fictitious creators also quote the relevant inputs from Devi Bhagavatam to justify these views.

However, thanks to Sri Madhvacharya Ji who has given us the correct knowledge about the Goddess Durga, by giving verse to verse meaning taking shlokas from Hindu scriptures.

It is very well explained about the real values about the Goddess Durga which can be accepted and we can keep away the so called imaginary and fictitious Devis which are completely unacceptable as per Hindu scriptures.

One among the 18 Upa Puranas is Devi Bhagavatam. This is not a Satvika Purana and its words conflict and contradict the view held by Vedas i.e., supremacy of Lord Vishnu. 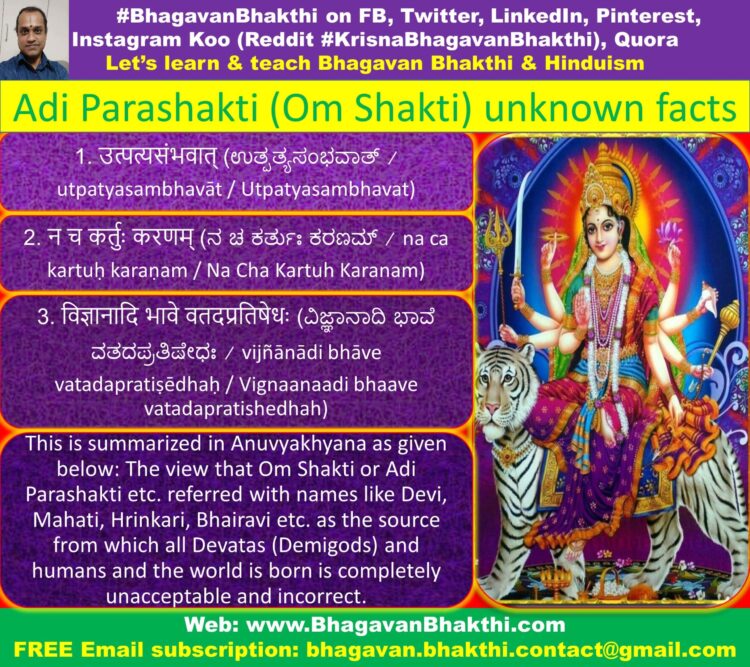 This is summarized in Anuvyakhyana as given below: The view that Om Shakti or Adi Parashakti etc. referred with names like Devi, Mahati, Hrinkari, Bhairavi etc. as the source from which all Devatas (Demigods) and humans and the world is born is completely unacceptable and incorrect.

This is because, the lineage can exists only by the union of a male and a female. But in highly special situations from male alone.

The inputs that Om Shakti, Adi Parashakti etc. is the mother of all, surely conflicts with Sadgamas, that is, Vedas, Ithihasa and Satvika Puranas etc. Thus it cannot be accepted as per the Hindu scriptures.

“Those who set out to give explanation about Vedas, Puranas and Itihasas need to have knowledge of bhashatraya (Here Bhashatraya means, three types of bhashas), 7 vyatyasas and Reeti shataka (100 reetis). If a person gives incorrect knowledge, then he / she is bound to get totally incorrect awareness about knowledge which will surely lead to wearisome hell.”

A clear path and combined view appears when the principles of Sri Vedavyasa Ji is understood and correctly applied to the interpretation of Vedas, Itihasas, Puranas. As per Sri Vedavyasa Ji, Lord Vishnu is the supreme and ultimate. 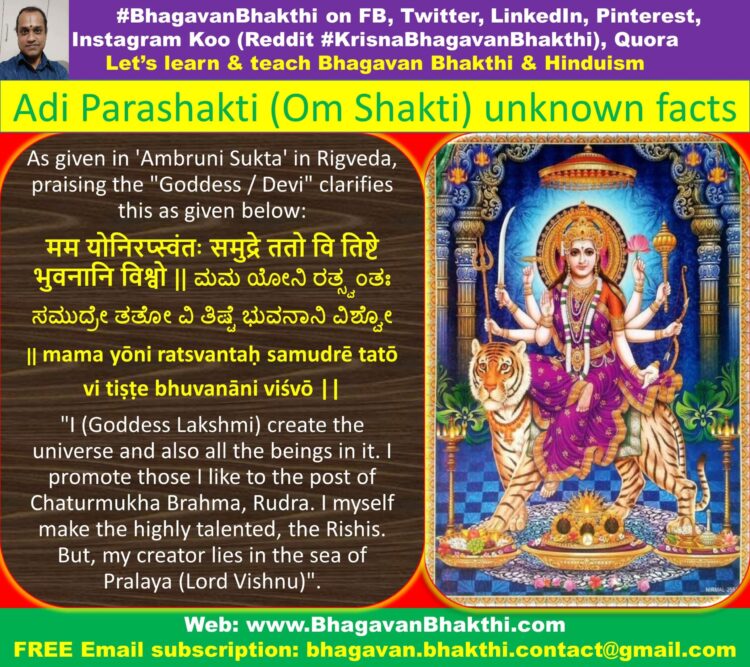 As given in ‘Ambruni Sukta’ in Rigveda, praising the “Goddess / Devi” clarifies this as given below:

“I (Goddess Lakshmi) create the universe and also all the beings in it. I promote those I like to the post of Chaturmukha Brahma, Rudra. I myself make the highly talented, the Rishis. But, my creator lies in the sea of Pralaya (Lord Vishnu)”.

Goddess Lakshmi says that, she creates the universe and also the beings in it. She adds that, she promotes Devatas like Brahma, Rudra etc. She herself makes the highly talented people, Rishis etc., but finally she also adds that, she is completely dependent on Lord Vishnu for anything and everything. This is the real meaning.

From this, we can easily and clearly understand that the highest Devi (Goddess) is Goddess Lakshmi as given in this shloka of Ambruni Sukta (Few people pronounce this as Ambrini Sukta which is incorrect).

In addition to above explanation, it is Goddess Lakshmi who does all the creation, maintenance, and dissolution, but she is completely dependent on Lord Vishnu and she is not at all independent.

Goddess Lakshmi does this all as per the instructions and grace of Lord Vishnu, who makes the original creation, maintenance and dissolution.

Devi Bhagavatam itself, which initiates the idea of Om Shakti or Adi Parashakti provides the clue that Lord Vishnu is the supreme in multiple aspects in its very first chapter itself. But people who read it with dyed eyes will not always oversee it. 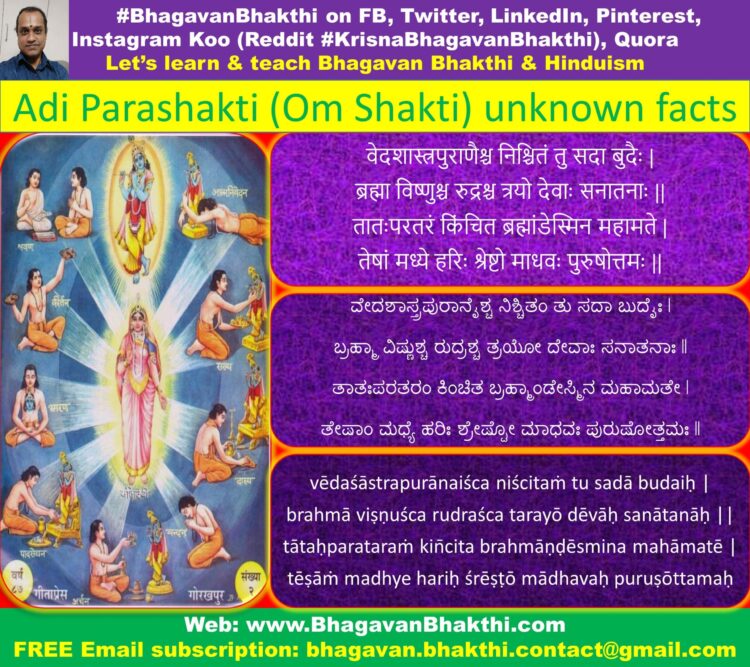 From the above shloka, it is clear that śrēṣṭō mādhavaḥ, that is, Lord Vishnu (Madhava) is the supreme.

By now it should be abundantly very much clear that, there is no such thing as Om Shakti or Adi Parashakti as per Hindu scriptures and it is purely man made theory.

The connection to Goddess Parvati is obvious even when one considers the popular Navadurga names. 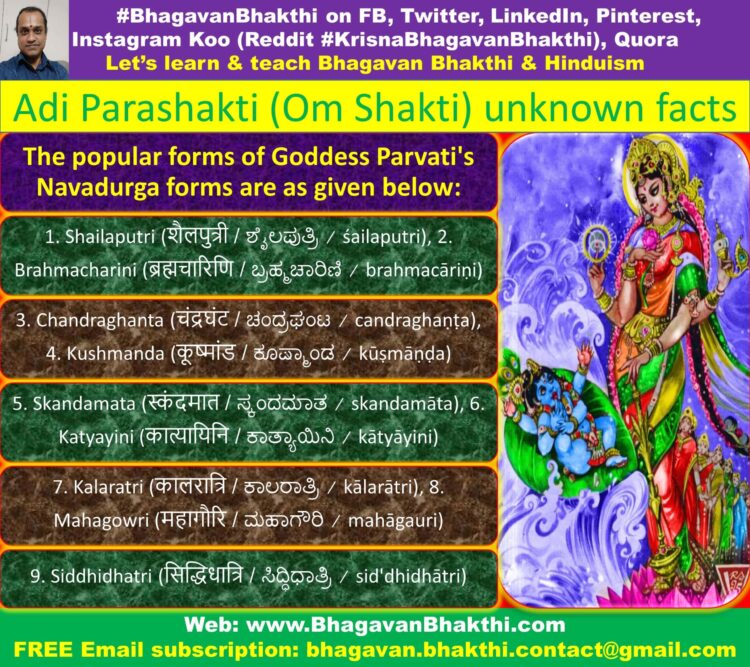 The popular forms of Goddess Parvati’s Navadurga forms are as given below:

From the above, four out of Navadurga (Nine Durga) names, that is, Shailaputri, Brahmacharini, Skandamata and Mahagowri are very clearly Goddess Parvati names. It is very much understandable that Goddess Parvati is also Goddess Durga.

Who is real and supreme Goddess Durga

It is Sri Madhwacharya Ji who has given the ultimate explanation about Goddess Durga.

Sri Madhwacharya Ji quotes ‘Paingi shruti’ in Bruhadaranyaka Upanishad Bhashya listing out the various Goddess Lakshmi Roopas (forms) and avatars among which Goddess Durga is one. 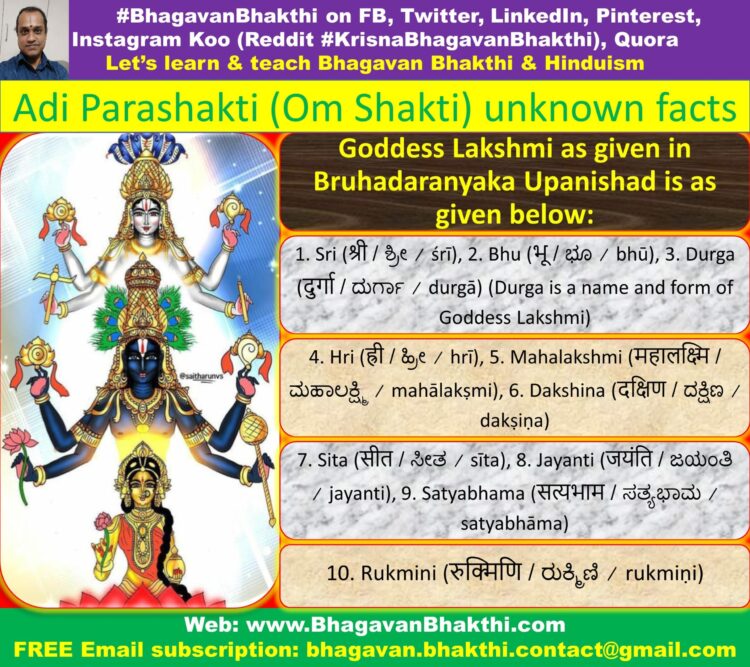 The complete list of Goddess Lakshmi as given in Bruhadaranyaka Upanishad is as given below:

Apart from these roopas (forms), Goddess Lakshmi takes unlimited forms including the consort of the Lord Vishnu’s avatars.

Among the various roopas (forms) of Goddess Lakshmi, the trinamas (Three names), that is, Sri, Bhu and Durga are the most important ones. 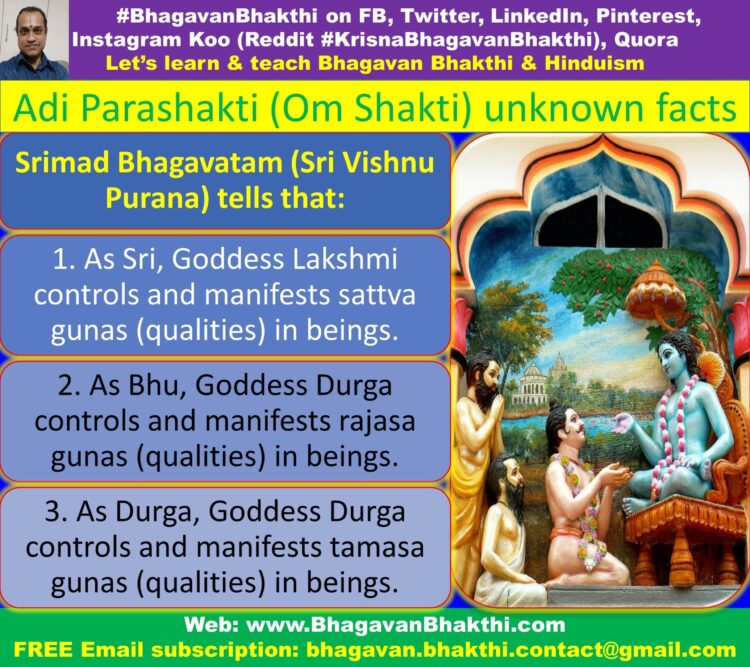 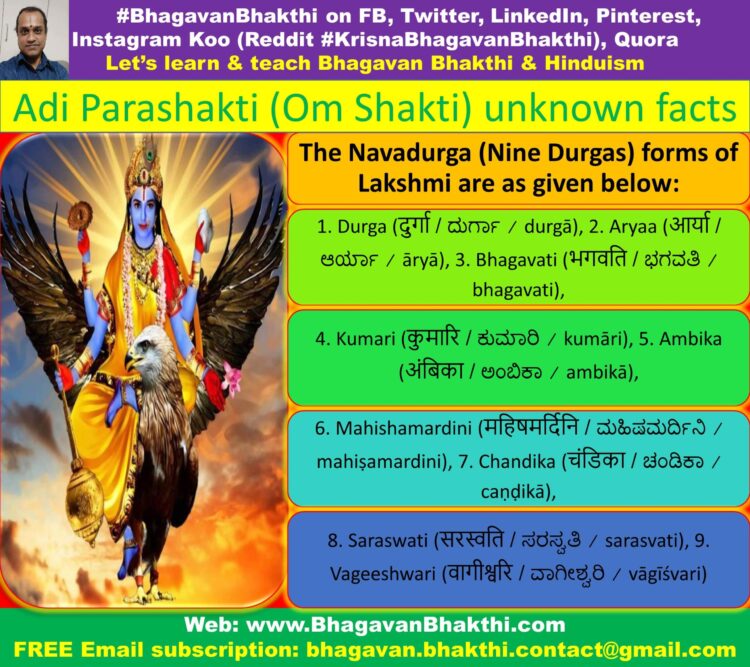 The Navadurga (Nine Durgas) forms of Lakshmi are as given below:

Real Hindu scriptures followers and real meaning seekers are supposed to worship these nine forms of Durga in Navaratri through antaryami upasana. 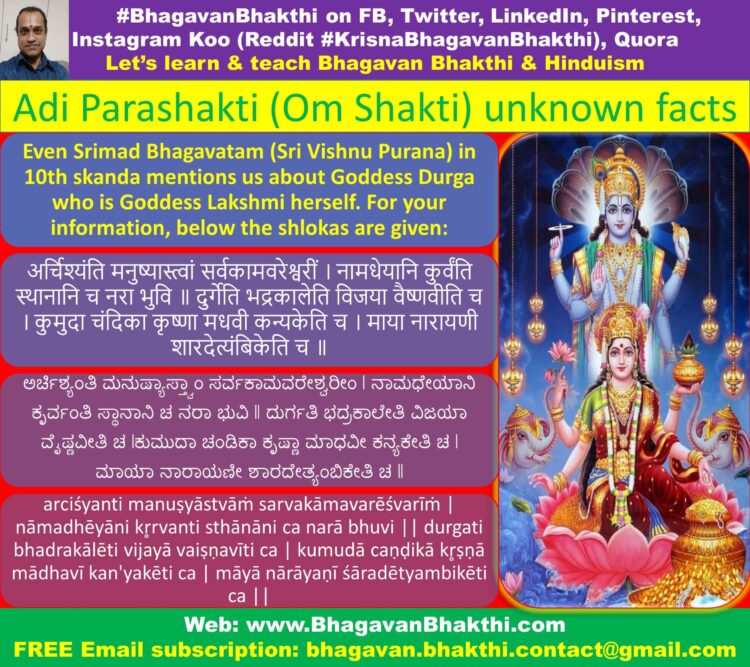 Even Srimad Bhagavatam (Sri Vishnu Purana) in 10th skanda mentions us about Goddess Durga who is Goddess Lakshmi herself. For your information, below the shlokas are given: 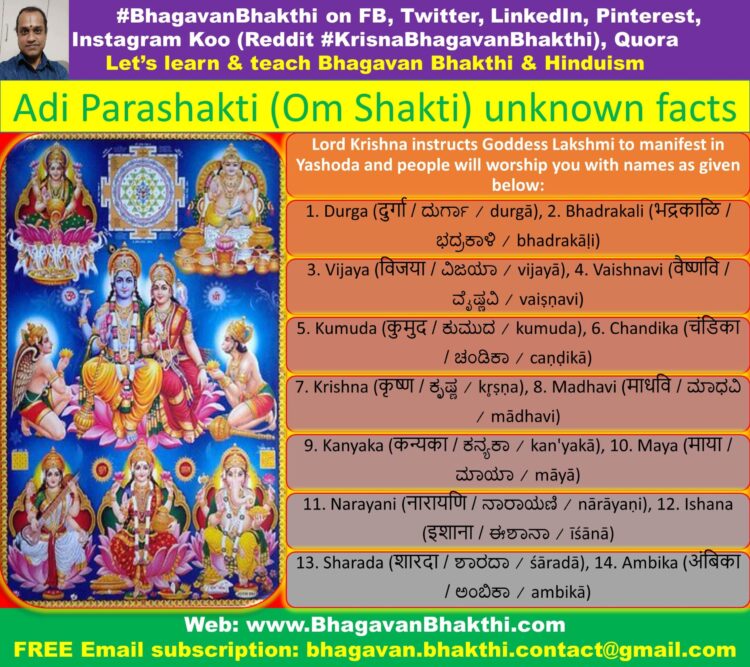 Lord Krishna instructs Goddess Lakshmi to manifest in Yashoda and people will worship you with names as given below:

Prakasha Samhita correlates the ‘Linga sharira’ of each of us to a coconut shell. Just like a coconut shell has three holes at the top, but still binds the water, etc. inside it, the three roopas (forms) of Goddes Lakshmi, that is, Sri, Bhu and Durga controls and binds us to the trigunas (Sattva, Rajasika and Tamasika).

2. How come Sri, Bhu and Durga forms and specially Durga in this context come into picture during Pralaya?

Sri Madhwacharya Ji in his Gita tatparya says a devotee of Lord Vishnu has to cross the three gunas, that is, Sattva Guna, Rajasika Guna and Tamasika Guna and their abhimanis (Controller deities), that is, Sri, Bhu and Durga to reach Goddess Mahalakshmi Devi. Only with her grace, a devotee can easily reach Lord Vishnu.

For example, Agnana (ignorance) and moha (soft spot) are the biggest obstacles faced by sadhaka in this Kali Yuga. Goddess Durga’s grace is absolutely essential to overcome these obstacles.

During pralaya, Lord Narayana (Vishnu) sleeps alongside Goddess Lakshmi with her three forms, that is, Sri, Bhu and Durga.

To know full information about Goddess Durga, please click the below link: