Origin of the name Hindu | How Hindu name came into existence

Today, let us know how the name or word Hindu came into existence. Why Indians are also called as Hindus and also let us know about the meaning of the word Hinduism. 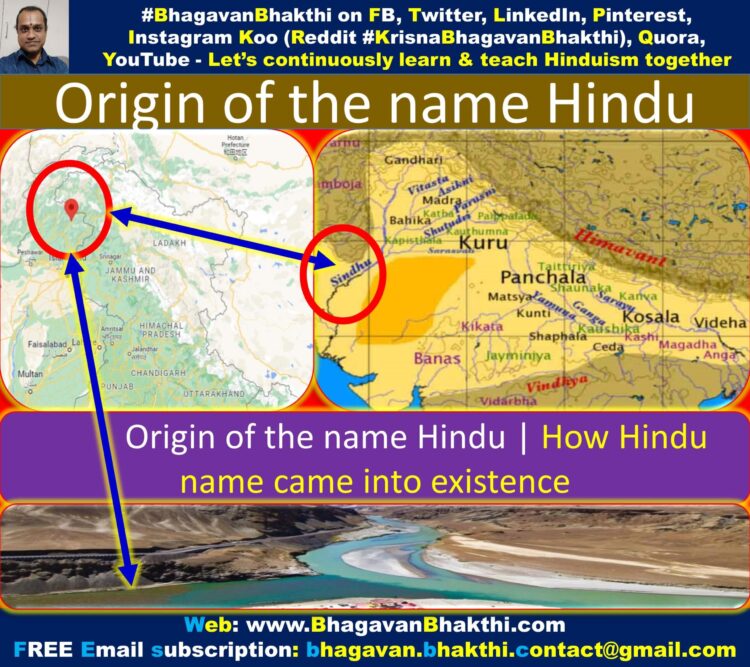 Hindus are the group of people who take highest dignity in their cultural, ethnicity, Dharma, etc. adhering to aspects of Hinduism (Sanatana Dharma).

To the greatest extent, the term “Hindu” has also been used geographically, culturally, and later Dharmic identifier for people living in the present Indian subcontinent.

The term or the word or the name “Hindu” traces back to old Persian, which derived this name from the Sanskrit name Sindhu (सिन्धु / ಸಿಂಧು / sindhu), referring to the river Indus.

The people who came from the Western Asia and / or from European region, were not able to pronounce the word Sindhu correctly.

They (Western Asian people and Europeans) pronounced this divine word / name of Sindhu as Indus and also later as Hindu.

Few people many not believe this and thus I am giving more examples connecting to this.

As said earlier, the Western Asians and Europeans can’t pronounce the words which starts from Sa (स / ಸ / sa) properly.

But instead, they pronounce it as Ha (ह / ಹ / ha). This is the trick and secret behind this. 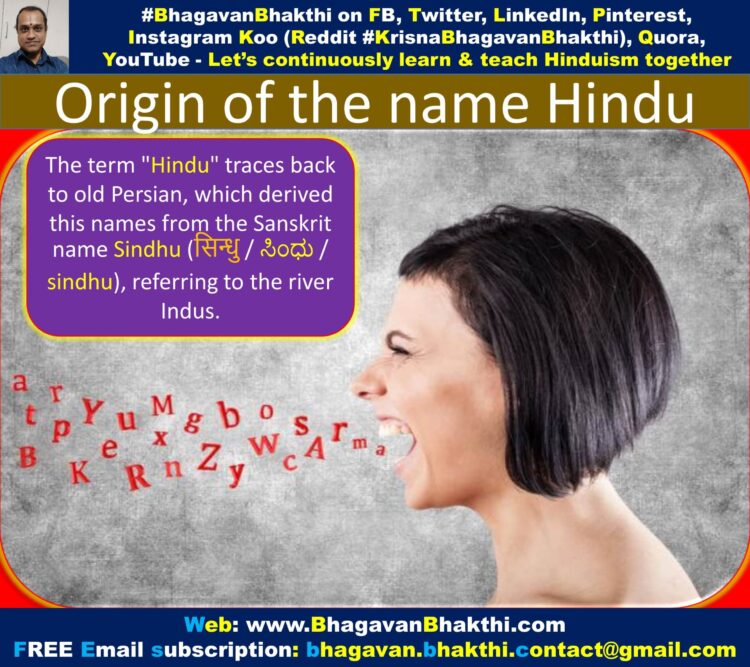 Sapta (7 in Sanskrit) has become Sheva in Hebrew language.

Sapta (7 in Sanskrit) has become seven in English and other European languages.

Sapta (7 in Sanskrit) has become Septem in Latin language.

Sapta (7 in Sanskrit) has become Sèt in Haitian Creole language.

Sapta (7 in Sanskrit) has become Sep in Esperanto language.

Sapta (7 in Sanskrit) has become Sewe in Afrikaans language.

Both the words (names) like Indus, Hindu are same, but mispronounced (incorrectly pronounced) words from the Sanskrit word Sindhu. 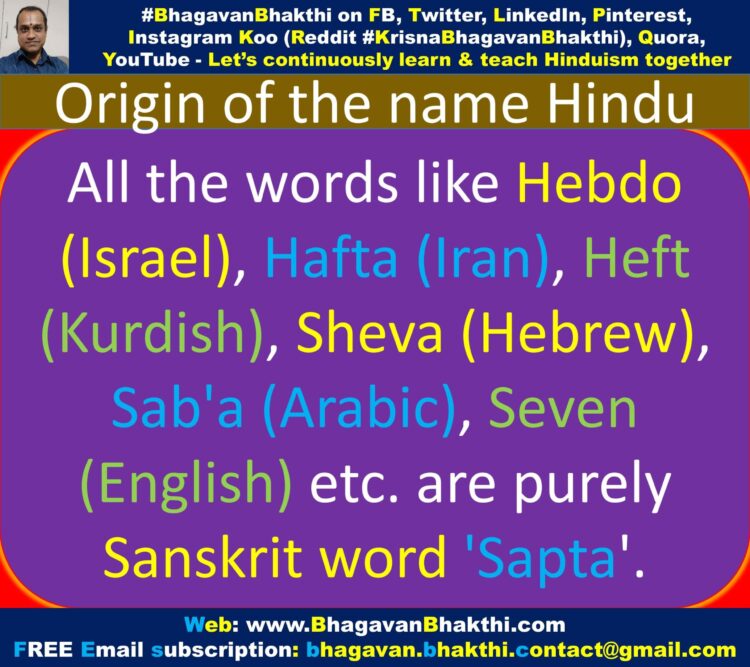 This means 7 in Sanskrit and also 7 in different languages as given above.

That is, all these words are mispronounced or incorrectly pronounced words from the Sanskrit word ‘Sapta‘.

Sanatana Dharma and the Sanskrit language is existing since the “aadi kalam” (unknown time frame) and no one is aware of the exact time frame except Lord Vishnu himself.

And off course will last long until the “ananta kalam” (unknown infinite time frame).

Now coming back, the two major known cities of the Indus Valley civilization were Harappa and Mohenjodaro.

As said above, the word “Hindu” originates from the Sanskrit word for river, Sindhu.

The Indus River (Sindhu River) running through northwest India into Pakistan received its name from the Sanskrit term Sindhu.

The Middle East including the Persians designated the land around the Indus River as Hindu, a mispronunciation (incorrectly pronounced word) of the Sanskrit word Sindhu.

The Indus Valley Civilization (Sindhu River) extend quite far from the banks of the Indus River including parts of contemporary and the present Pakistan, Afghanistan, Iran (Persia), and India. 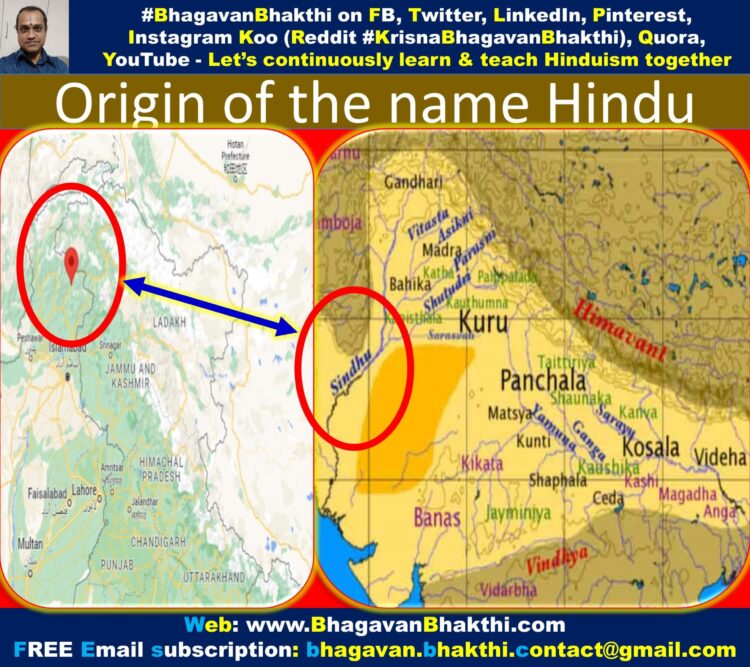 Because of Sindhu River (Indus River) location between the Indian Subcontinent and the Iranian (Persian) plateau, the area has seen many military invasions including Alexander, the Persians, the Kushans, etc.

In 712AD, the Muslims invaded the Indus Valley (Sindhu River and beyond).

To distinguish themselves (Muslims), they called all non-Muslims as Hindus (As said before, this is a mispronounced / incorrectly pronounced word from the original name Sindhu).

The people who live beyond the river (Starting from Middle East) Sindhu are known as Hindus. 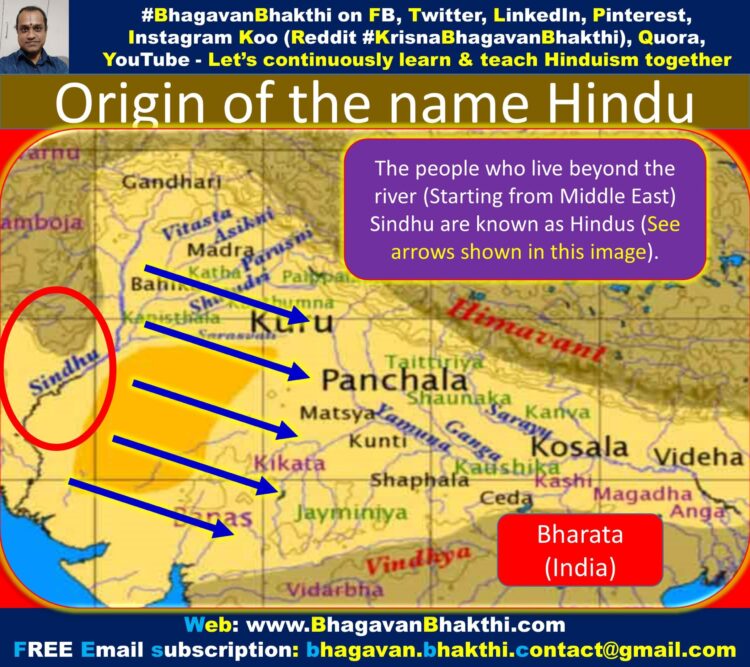 But the original name for the Hindus and the Hinduism will remain as “Sanatana Dharma“ and no one will be able to change this divine name. 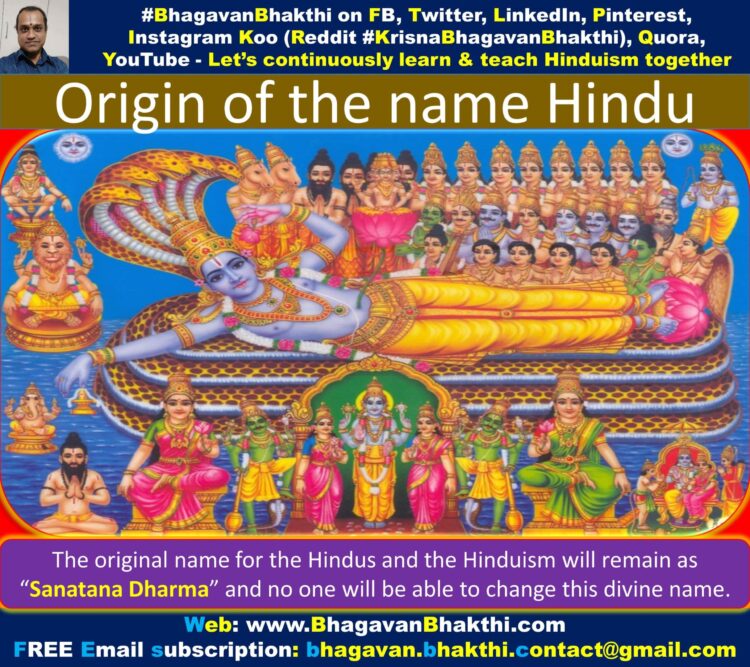 And later, the Europeans, especially the British gave us the name Hinduism (People who follow the Hindu style of living, those religious people are said to follow Hinduism).

My dear friends, we should always take highest pride, since we all belong to the greatest Dharma called as the Sanatana Dharma.

This is because, we follow an unique and divine Dharma which is directly given by Lord Vishnu himself.

More information will be added to this post on regular basis. Please visit this post after some time.

To know about “What are Sanskrit language unknown facts (origin, importance)“, please click the below link:

To know “Information about Sanskrit language“, kindly click the below link: