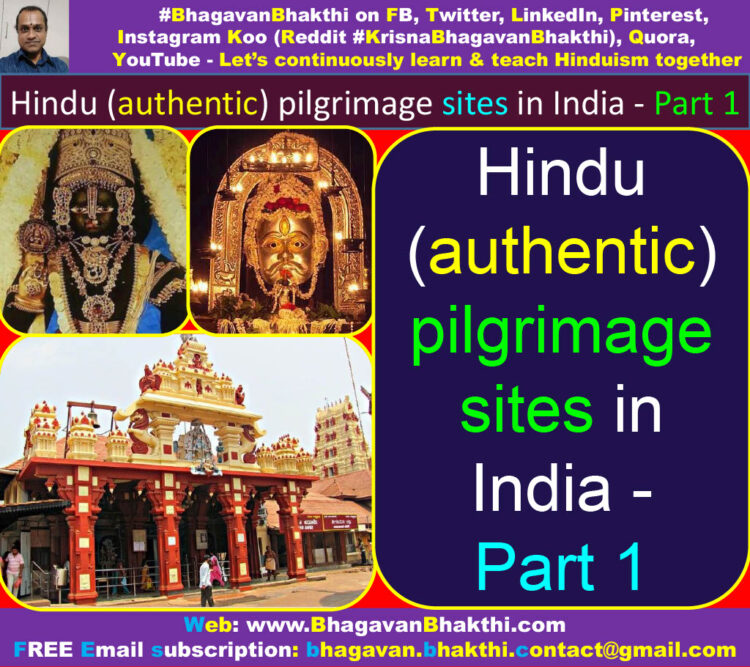 I urge to the readers to read this post completely and also to read the other posts connected with this post, to understand about all the pilgrimage sites of India with authenticity as per Hindu Puranas.

Note : Please note that, this below information is based on an authentic grantha (Hindu text) which was written around 500 years ago.

For few web visitors, these pilgrimage places may look like unknown places.

But, all these places are genuine pilgrimages places as given in Hindu Puranas and other granthas (texts).

There was a great and divine saint (Sanyasi) in Udupi, in South India called as Guru Sri Vadiraja Tirtha nearly 500 years ago.

He used to worship Lord Vishnu in Lord Hayagriya roopa (Horse form) as shown in the below image.

He had travelled all over India and had written a grantha (Hindu text) called as ‘Tirtha Prabandha‘ (pilgrimage places information).

In this grantha (Hindu text), he has given information about the various pilgrimage places around the India. 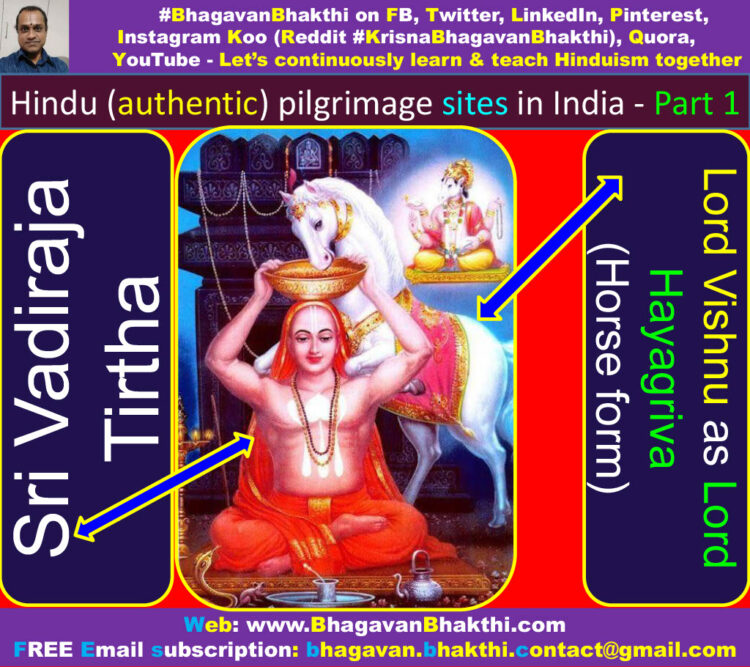 Guru Sri Vadiraja Tirtha visited the holy pilgrimage places around India starting from Udupi (Karnataka) in a clockwise direction, through:

Let us start as per his direction, that is, let us start from the Paschima (Western) side as given below:

Paschima Prabanda (India’s Western side pilgrimage places information) is as given below:

(This covers south-western parts of the authentic sites of India)

On the India’s Western side, Guru Sri Vadiraja Tirtha visited totally 44 pilgrimages places as given below:

At the start of the pilgrimage visit, Guru Sri Vadiraja Tirtha prays to Lord Vishnu to provide purity of mind and for the successful completion of the tour.

Parashurama Kshetram (Kshetra) : Many of us know that, Lord Parashurama conquered lands from vile Kshatriyas and donated the land to Brahmins.

The present land from Gokarna (Karnataka) to Kanyakumari (Tamilnadu) is called as Parashurama Kshetram (Kshetra). 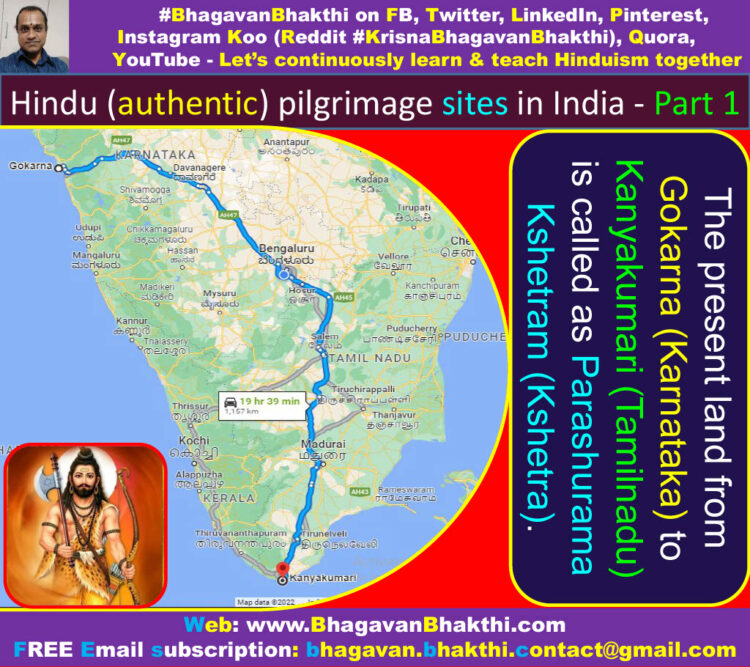 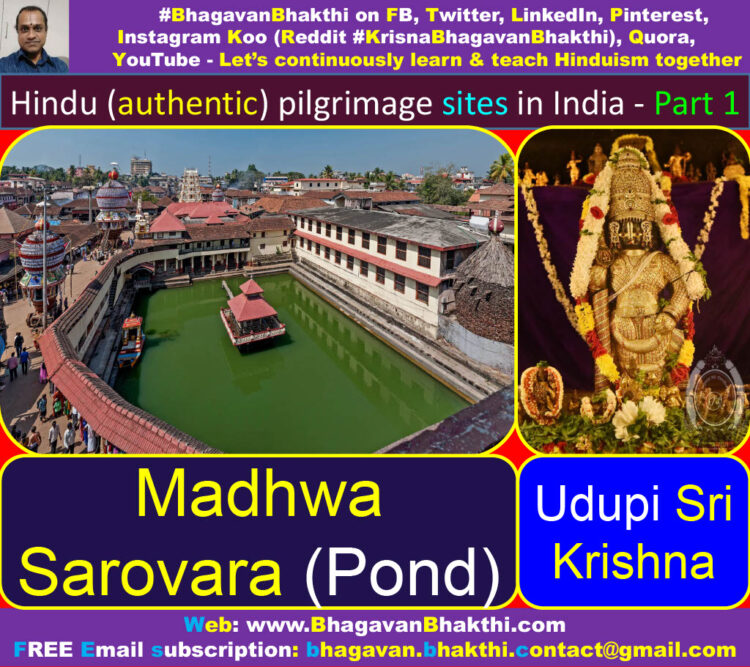 And also how the deity from Dwaraka (Gujarat) came to Udupi is well narrated in this grantha (text) of ‘Tirtha Prabandha’.

The Devatas’ (Demigods’) architect Vishwakarma then created the divine deity of Lord Krishna bearing a ‘curd churning cane’ (In Kannada – ಕಡಗೋಲು / Kadagolu) in his right hand and a string in his left. 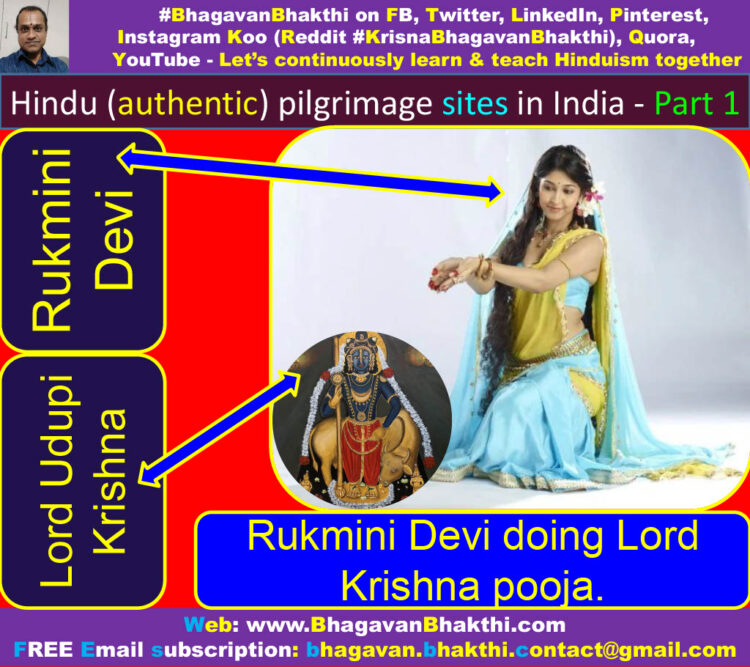 he carried a replica of Lord Ananthapadmanabha’s deity with him and installed it at ‘Pajaka Kshetra‘ where it is worshipped even to this day also. 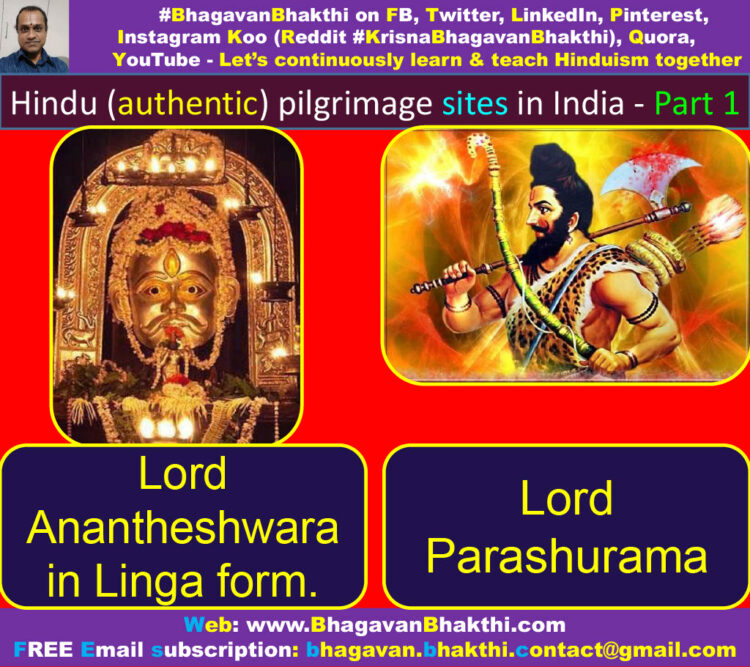 On its four sides are four holy tirthas or tanks created by Lord Parashurama.

Inside this divine temple, there is a pond called as ‘Vasudeva tirtha‘.

In the childhood days of Sri Madhwacharya, once his mother wanted to have holy dip in four tirthas around Durga hill.

But due to her health issues, it was not possible for her to go to those tirthas and to have holy dip.

At that time child Vasudeva (Sri Madhwacharya) created this pond and assured his mother that, a holy dip in this pond itself is equivalent to the dip in those four tirthas.

Hence the pond is named as Vasudeva Tirtha (Childhood name of Sri Madhwacharya).

There is another place close to Pajaka on our way to Pajaka from Durga betta where Vasudeva crushed a demon in the form of a snake.

A small temple is built to preserve this monument. 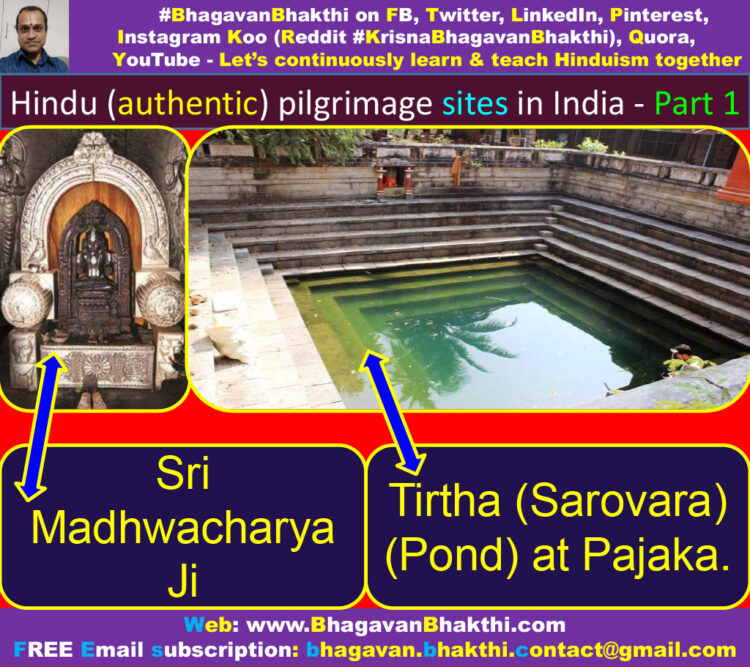 Kunjarugiri temple : Kunjaru is a hamlet in Kurkaal village and it is situated approximately 11 kms to the south-east of Lord Sri Udupi Krishna’s temple.

This tiny village is reputed for its sanctity owing to the celebrated Sri Durga Devi (Goddess Sri Maha Lakshmi Devi) Temple on a high hillock popularly known by the below given names:

The magnificent and divine deity of Goddess Sri Durga Devi is in the ‘Chaturbhuja‘ (four armed form).

Goddess Sri Durya Devi’s deity is having the below said divine things:

Shanka (conch) and Chakra (disc) in the upper hands and Dhanush (bow) and Trishula (trident) are being held in the lower hands.

The Goddess Sri Durga Devi temple is installed by Lord Sri Parashurama on the hilltop. 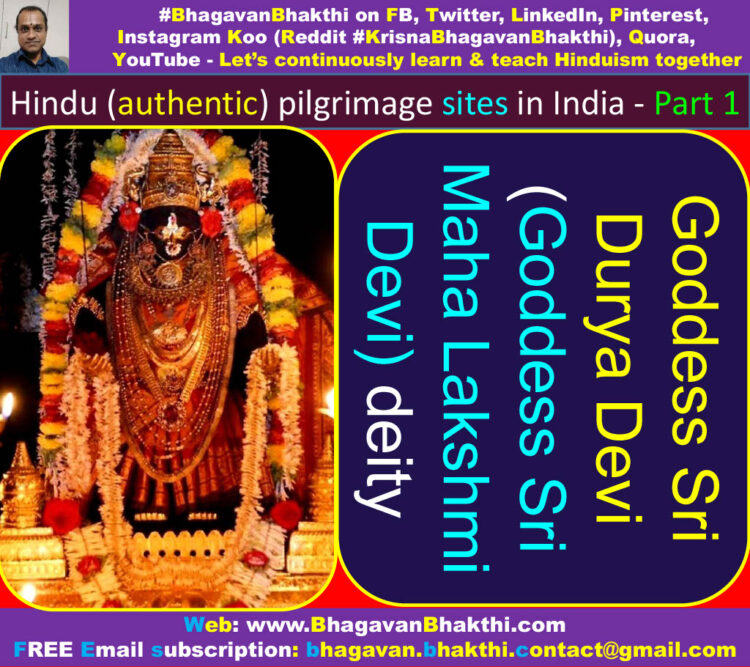 Yelluru Vishwanatha : This temple is around 24 kms away from the present day Udupi.

When Guru Sri Vadiraja Tirtha visited this place, it was noon and the temple was closed.

Guru Sri Vadiraja Tirtha went inside for darshan, again Nandi interrupted him and He prayed to Nandi and continued further.

Here an important point to be noted is that, one can worship Lord Viswanatha (Shiva) anywhere standing in front of Nandi.

The temple has a rich history of over 1,000 years as the divine place of ‘Swayambhu Sannidhya‘ (self manifested). 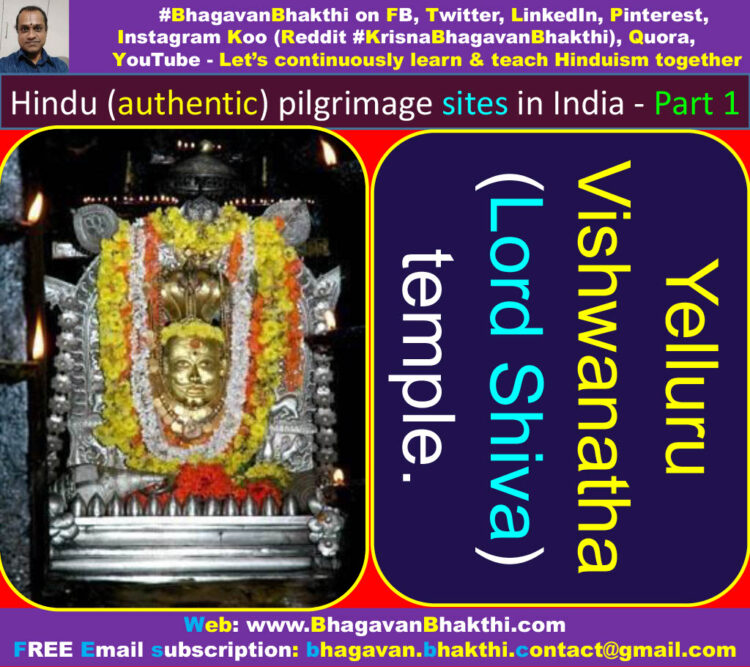 Madhyavata Matha (mutt) : This is the divine place where Sri Madhwacharya used to do afternoon pooja on his way from Udupi to Subramanya.

One of the eight Shaligramas which Sri Madhwacharya brought from Badri is installed here.

This place called as Chintamani is 6 kms away from Uppinangadi road On Mangaluru – Bengaluru highway.

According to legend, Lord Shiva was doing tapas (penance) here. 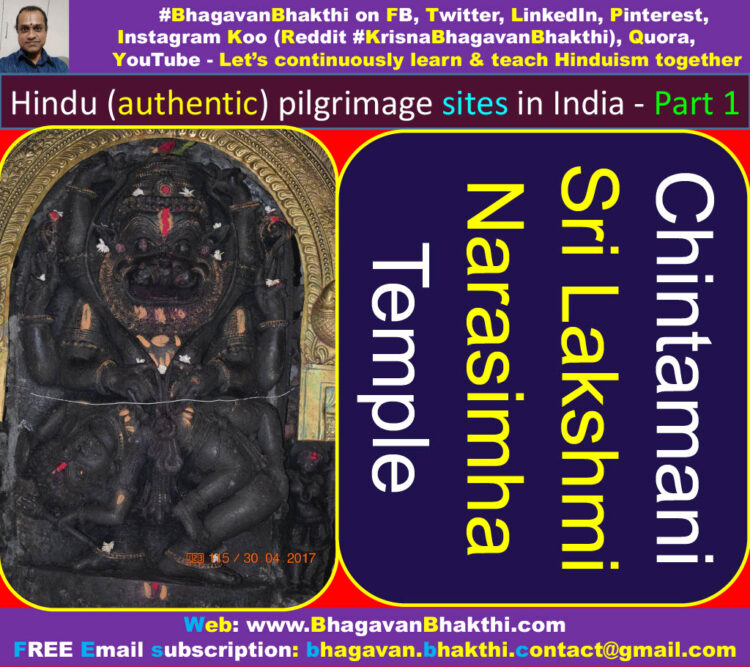 Netravati river : This river takes its birth from Varaha hills and joins the present Arabian sea near Mangaluru. 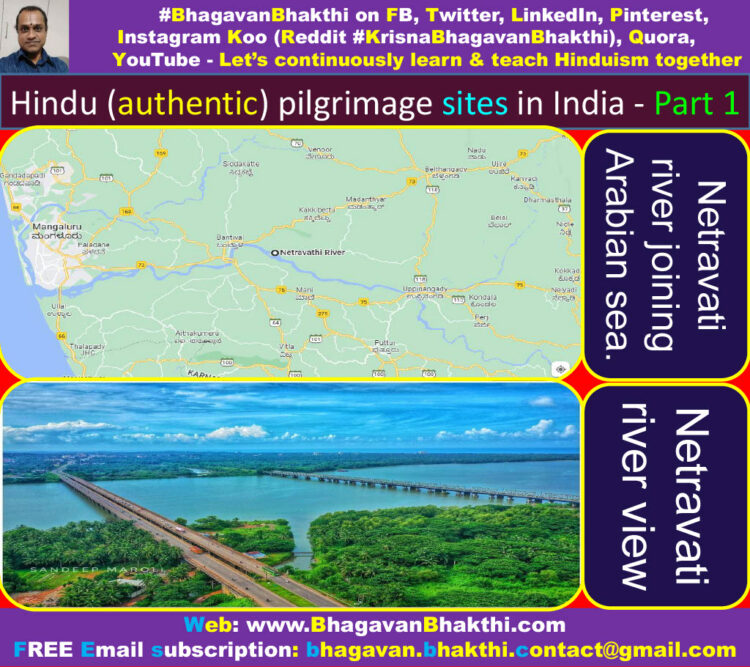 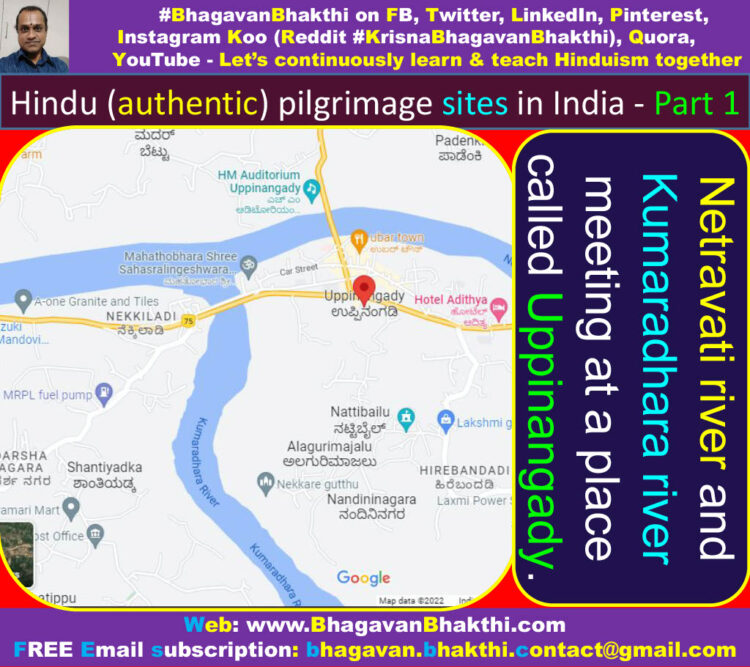 Kukke Subramanya Kshetra : It is inside the dense forests of Sahyachala in Karnataka.

This is established Kukke Subramanya temple or matha (mutt).

This divine Sri Kukke Subramanya (Lord Kartikeya) is one among the seven holy places created by Lord Parashurama is historically famous for “Nagaradhama”.

Residing with Lord Vasuki (Lord Shiva neck’s serpent), Lord Subramanya showers his divine grace on devotees as the presiding deity of the Kshetra. 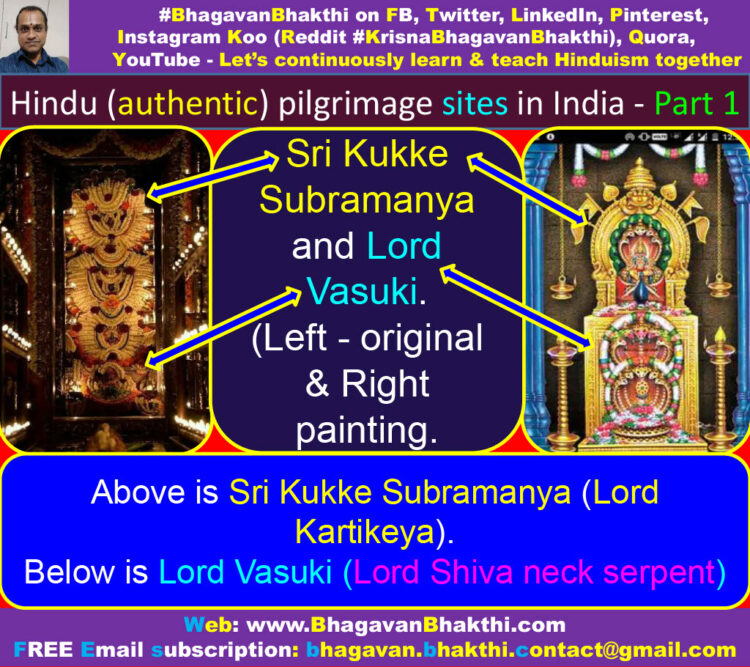 “Mrutika Prasada” is given here and this is regarded as highly sacrosanct.

Guru Sri Vadiraja Tirtha explains that, “visiting this kshetra will clear all past sinful deeds, will cure any types of skin diseases and pains“. 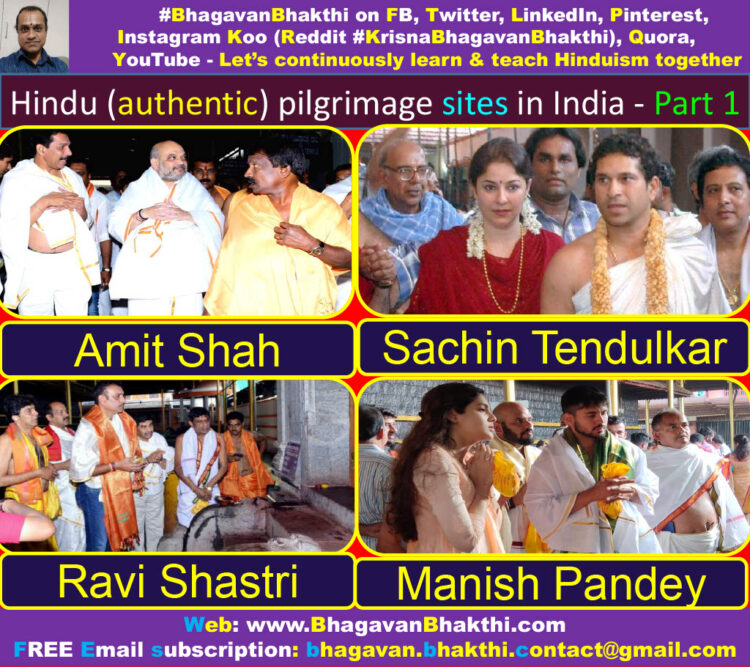 Vedavyasa samputa : Guru Sri Vadiraja Tirtha explains the Shaligrama which neither can’t be opened or nor be seen.

This divine temple is situated at the South-East part of Kukke Subramanya Temple.

Devotees pray to the Shaligrama of Lord Narasimha daily at this matha (mutt). 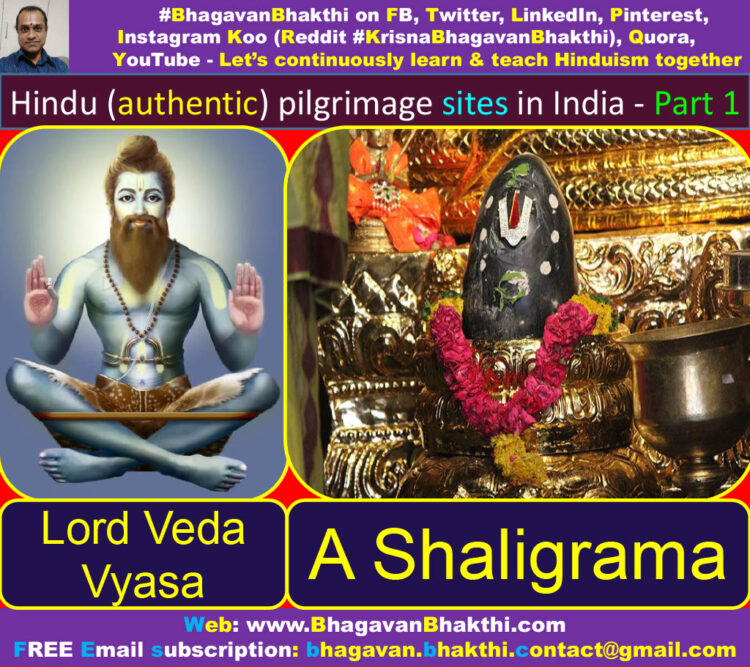 In our Puranas it is said that, Goddess Sri Mahalakshmi Devi will take an avatar as Goddess Sri Durga Devi to wipe out the Adharmic people from this earth. 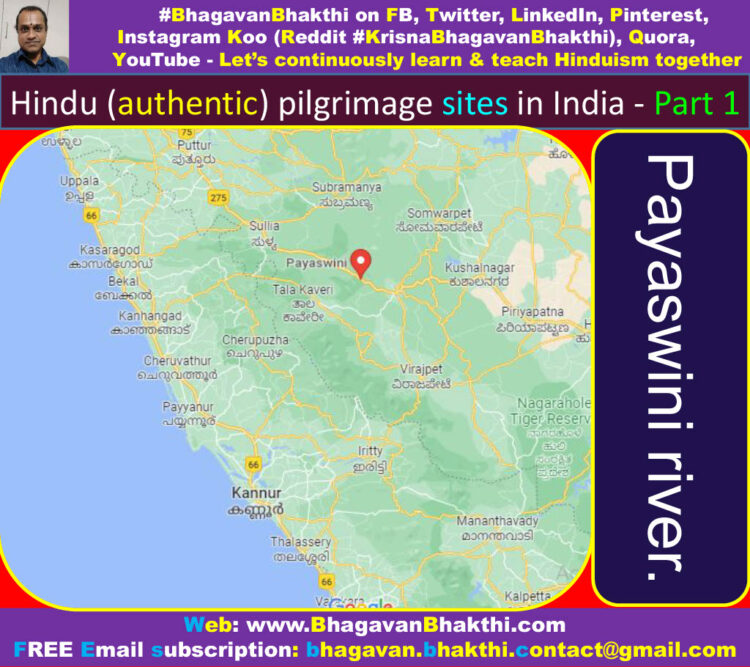 Suvarna river : This divine river originates from ‘Varahagiri’ and passes through ‘Vedagiri’ and moves along north of Kalyanpur. 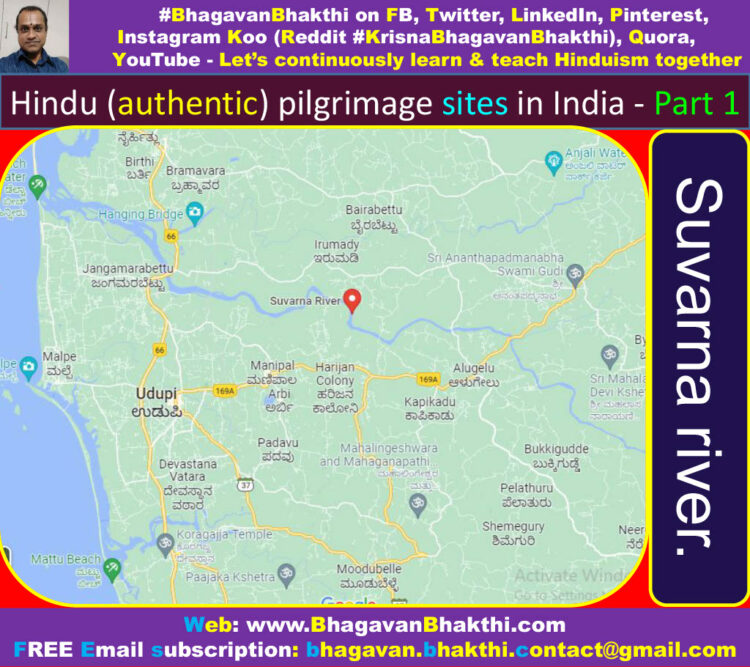 Kumbhashi Kshetra : This place is around 30 kms from today’s Udupi (Karnataka).

In this place Lord Siddhi Vinayaka (Ganesha) will grant and fulfill his devotees’ wishes.

This place is actually now called as Anegudde. 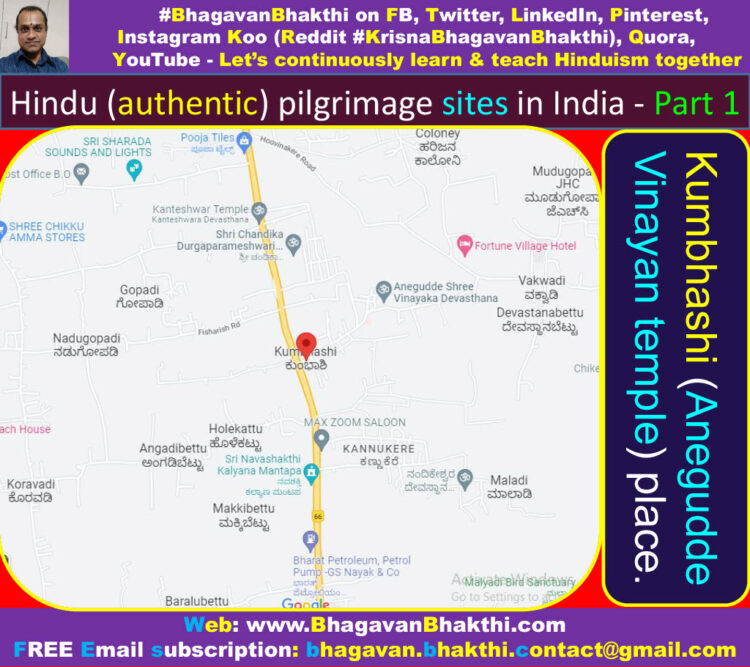 In Kannada, Ane + Gudde = Elephant + Hillock and it is the abode of the elephant god, Sri Siddhi Vinayaka (Ganesha).

It is believed when drought hit this area, the sage Maharishi Agastya came here to perform yagna to please the rain god.

A demon named Kumbhasura tried to disrupt the yagna by troubling the sages performing the yagna.

To rescue the sages, Lord Ganesha blessed Bhima (2nd of the Pandavas), the strongest among the Padavas with a sword.

Using this sword the mighty Bhima killed the demon and facilitated the completion of the yagna.

In Guru Sri Vadiraja Tirtha’s ‘Tirtha Prabandha’, he explaine that, since the powerful Bhima Killed demon using the sword (Ashi / Asi) the name of the place came to be known as Kumbhashi. 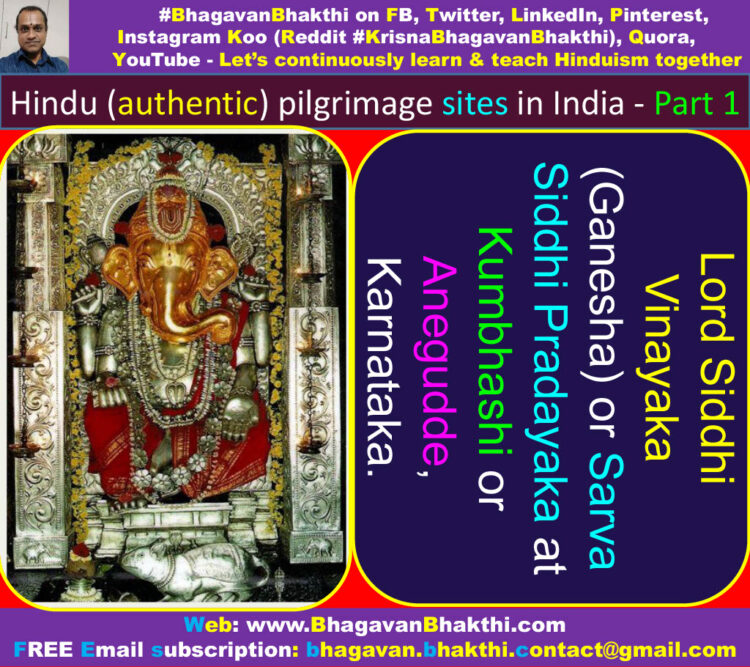 Koteshwara Kshetra : This divine place is 2 kms away from Kumbhashi.

There is a big Mahalingeshwara shrine here. The name Koteshwara is derived from the Sanskrit word ‘koti’, that is, Crore.

Lord Brahma is said to have worshiped Lord Kotilingeshwara here.

As per the legend, one crore sages gathered in this place and did penance to Lord Shiva.

Immensely pleased with their devotion, the Lord Shiva appeared in front of each of them. 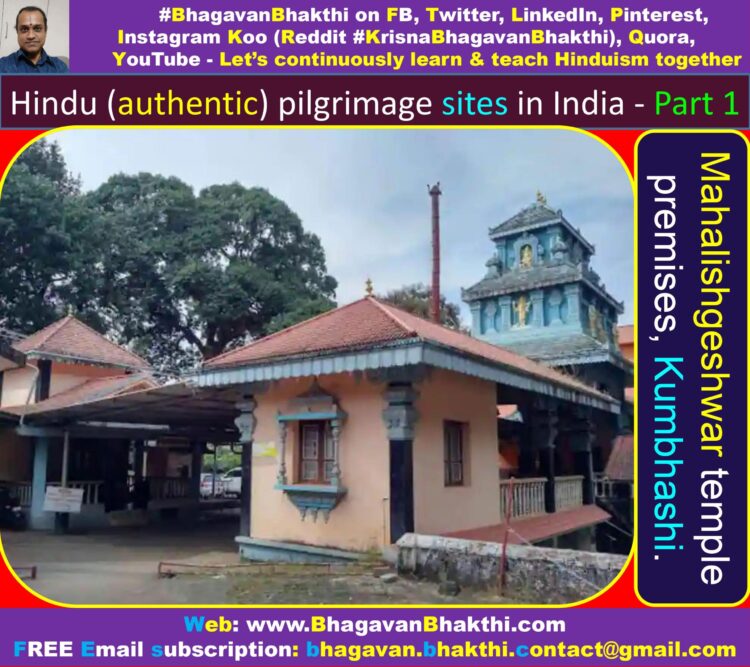 It is located in Udupi District, Karnataka, 25 kms from the present Arabian Sea.

The main deity of Sri Shankara Narayana temple is in the form of ‘Udbhava Linga’ (Self manifested Linga).

The naturally formed Lingam of Lord Shankara (Shiva) and Lord Narayana (Vishnu) is one feet below the ground, inside the Garbhagudi (sanctum sanctorum).

The devotees can only see the mirror image of the Lingam.

The Lord Shankara Linga is on the right (left as seen by the devotees) and Lord Narayana Linga on the left.

While Lord Shankara Linga is in round shape, where as Lord Narayana Linga is a flat one with foot prints of holy cow on it. 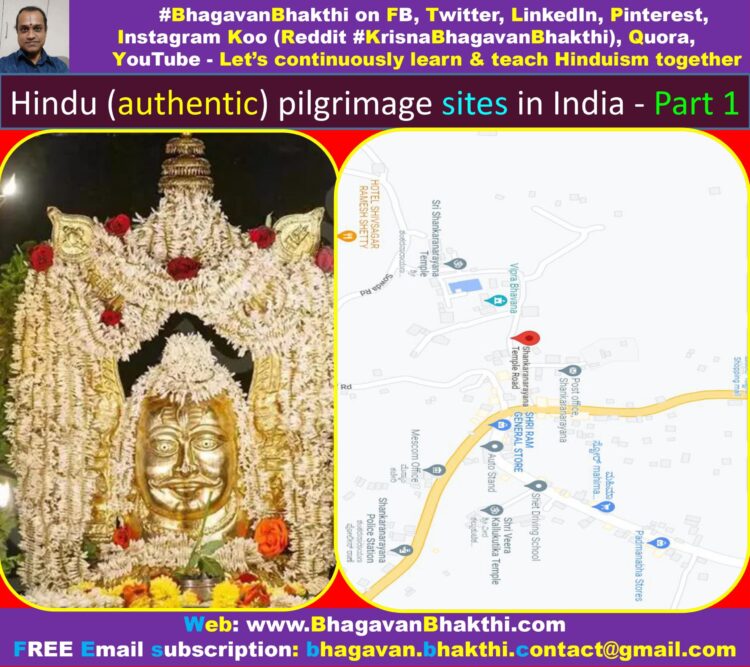 Kolluru Mookambika Kshetra : This highly divine temple is 80 km away from the present Udupi (Karnataka).

Kolluru is a great shakti and siddhi Kshetra.

There was a great Sage called as Kola Maharishi. Once, he was performing penance (tapas) here.

At that time a demon was persistently troubling Kola Maharishi.

This demon was also been praying to Lord Shiva, to get powers that would make him invincible and let him do whatever he wanted.

Knowing the evil mind of this demon, Devi Shakti made him Mooka (In Sanskrit Mooka means dumb).

Thus, when Lord Shiva appeared before him, he was unable to speak anything and thus was not able to ask his boon. 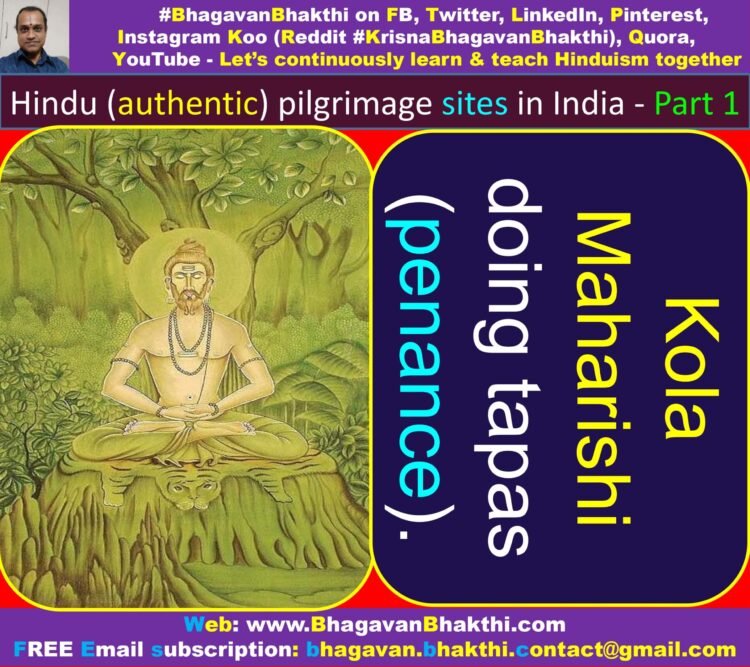 Enraged by this, the Demon began to harass Kola Maharishi, who was also praying to the Lord.

Thus, Devi Shakti came down and vanquished the Demon, Mookasura.

For this reason, this region came to be known as Mookambika (Mooka + Ambika = A Devi who has won over the demon Mookasura).

Maharishi Kola asked the Lord Shiva that, His Consort should remain here forever.

To grant this wish, a Jyotirlinga appeared, with a Swarnarekha (A golden line) in the middle.

Thus, one half of this Linga stands for the conscious principle as embodied by Lord Shiva, Lord Vishnu and Lord Brahma.

While the other stood for the Creative Principle in the form of Goddess Sri Parvati Devi, Goddess Sri Maha Lakshmi Devi and Goddess Sri Saraswati Devi.

The Goddess Mookambika is in the form of Jyotir Linga incorporating both Lord Shiva and Devi Shakti. 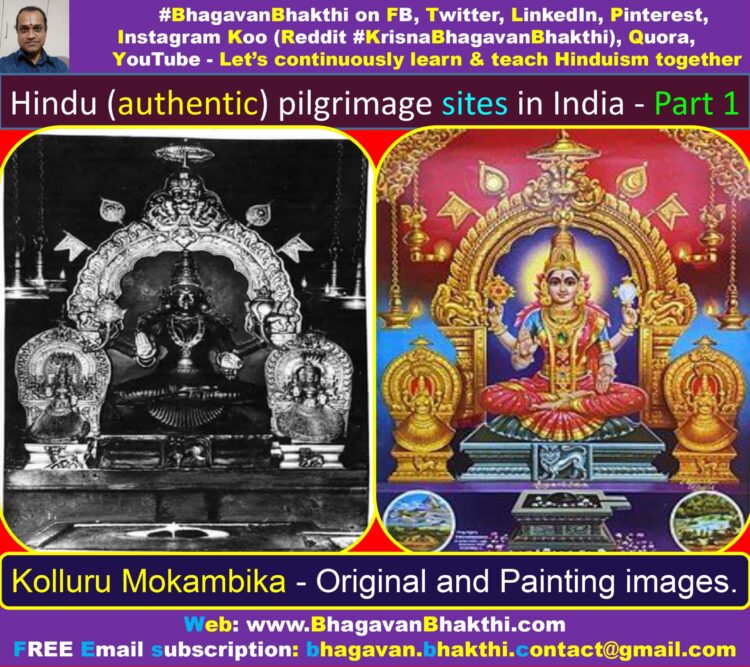 Sahyadri Hills : It is the mountain range that lies in the west coast.

Kolluru Mookambika temple is located at the foot hills of Kodachadri.

Kodachadri is part of Sahyadri mountains. 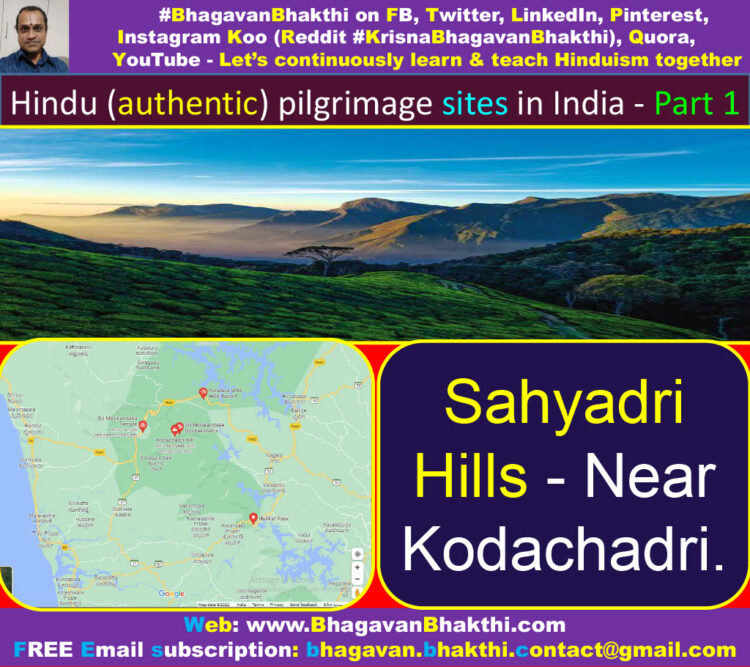 For “Hindu (authentic) pilgrimage sites in India – Part 2“, please click the below link:

For “Hindu (authentic) pilgrimage sites in India – Part 3“, please click the below link:

For “Hindu (authentic) pilgrimage sites in India – Part 4“, please click the below link:

For “Hindu (authentic) pilgrimage sites in India – Part 5“, please click the below link:

To know about “Ekadashi unknown facts” and real significances of Ekadashi fasting, kindly click the below link:

To know more about “Lord Krishna unknown facts“, please click the below link:

To know more about “Lord Vishnu unknown facts“, please click the below link: