Just before moving towards to know about “Indian city old names and new names“, let us know few basic information. 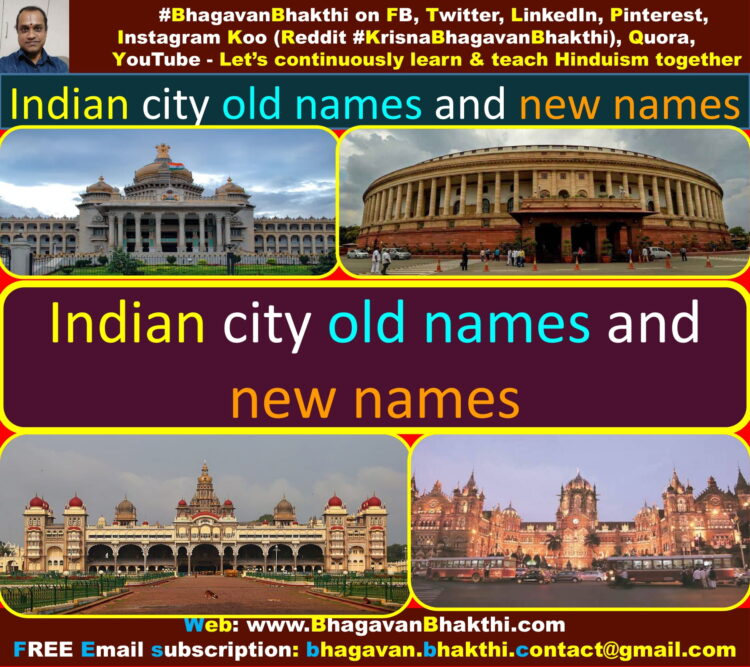 India (Bharat) (Bharata) is the oldest nation on earth and the oldest civilization.

Indian city names have always been changed time after time and thus you can find a huge difference in the old city names and new city names.

In the below list, read the first name as the present city name and later you will find the new city names of the India.

The list of the “Indian city old names and new names” are as given below:

Anegundi (Anegondi) : This is town in Karnataka and earlier it was called as ‘Kishkinda‘.

Yes, you are right, this is the place of Lord Hanuman.

Anegundi (Anegondi), was also called as ‘Gaja-Gahvara‘, known in Kannada as anegondi.

This is a small island near Hampi across the Tungabhadra river.

In the 14th century A.D., the place Anegundi (elephant enclosure) got its name from the Vijayanagar army.

Vijayanagar army had its elephant contingent in the hilly stations of the fortified capital Anegundi located on the banks of the Tungabhadra. 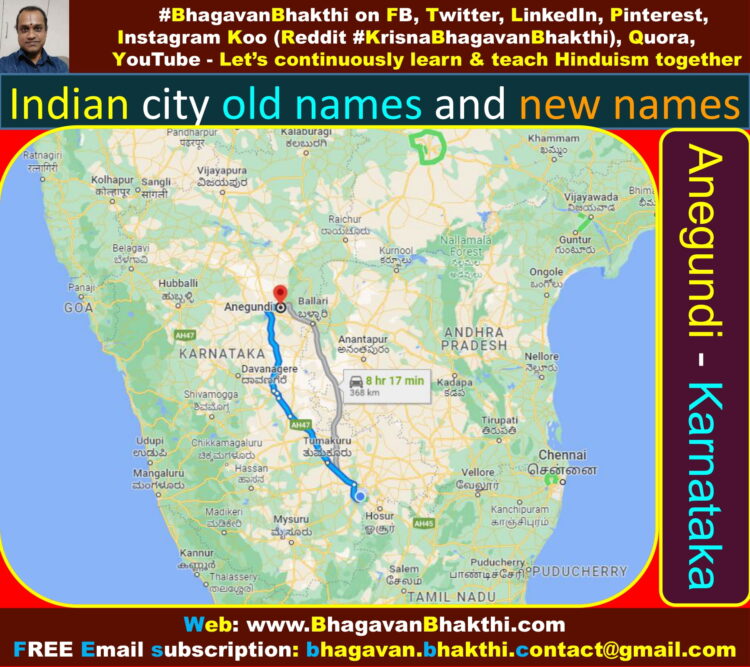 Legend narrates the origin of city Patna to a King by name Putraka, who created Patna by magic for his queen Patali.

It is said that in honour of the queen’s first-born, the city was named ‘Pataliputra‘. 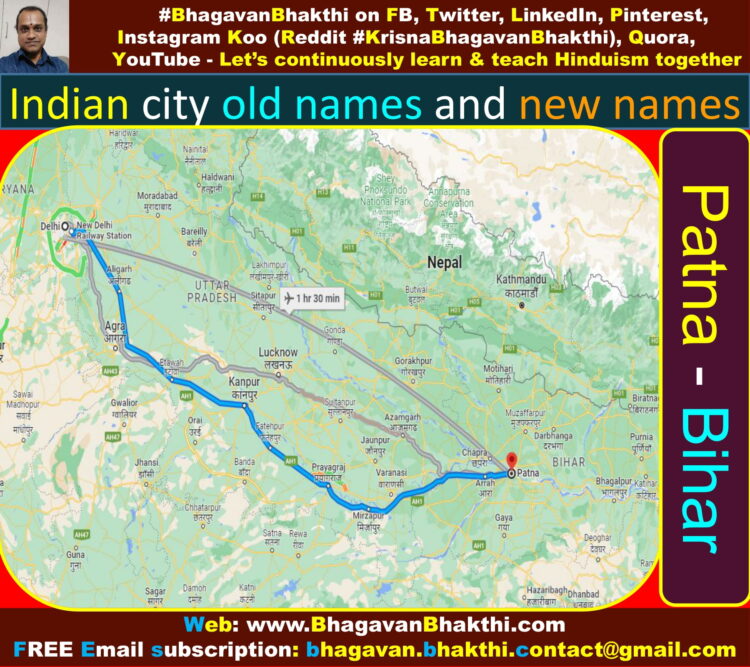 Hampi : This town is also located in Karnataka. Earlier it was called as ‘Pampa‘.

This city is very near to Anegundi (Anegondi) of Karnataka.

The river near the Hemakuta Hill came to be known as Pampa river.

The Sanskrit word Pampa morphed into the Kannada word Hampa and this is the place Goddess Sri Parvati Devi pursued Lord Shiva came to be known as Hampe or Hampi.

The site was an early medieval era pilgrimage place known as ‘Pampa Kshetra‘. 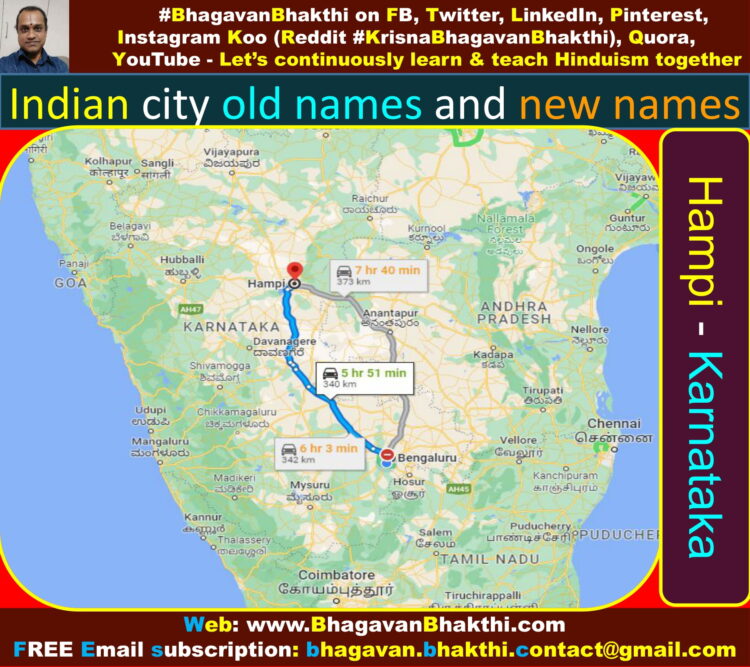 Bankapura : This town is also situated  in Karnataka. This place used to be known as ‘Bakasurapura’.

This is the place where the mighty Bhima slayed the demon Bakasura.

During the 9th century, Bankapura was named after Bankeyarasa (in 898 CE) who was a feudatory of Rashtrakoota king Amoghavarsha I. 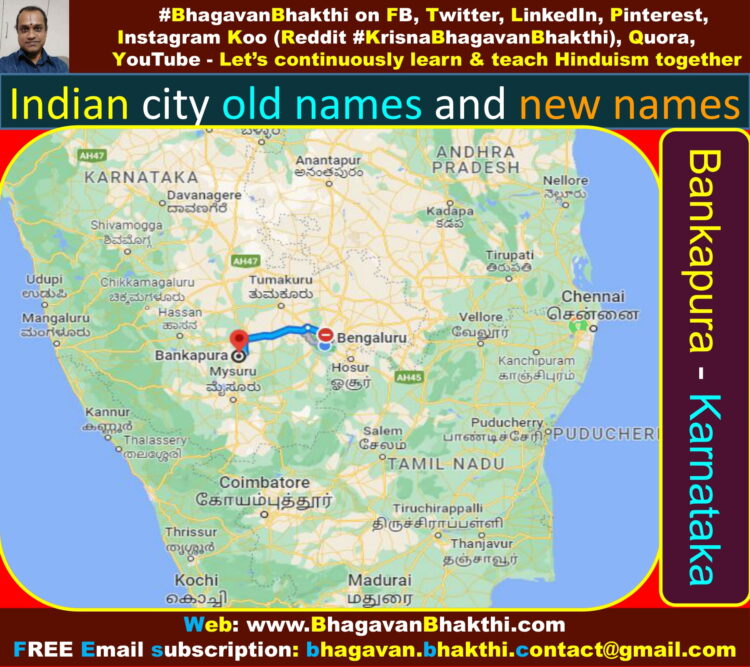 In Sanskrit and in Telugu, Bhagya means auspiciousness.

The city was also known as Baghnagar (city of gardens), and later acquired the name Hyderabad. 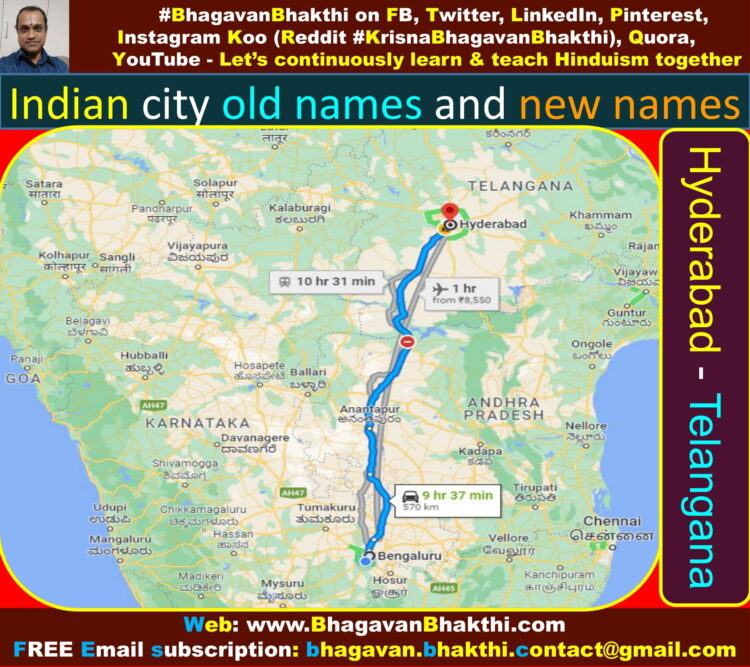 Bengaluru : This green city earlier was known as ‘Bendakaluru‘.

But, Europeans were not able to pronounce this city by the name ‘Bendakaluru’ and they pronounced this city as ‘Bangalore’ and thus it got the same.

Now, it is called as Bengaluru.

In the 9th century, Bengaluru was called ‘Bengaval + Oru‘ (In Kannada it means ‘city of guards’).

In the 12th century, according to another legend, it became ‘Benda + kaalu + Oru‘ (In Kannada it means ‘town of boiled beans’). 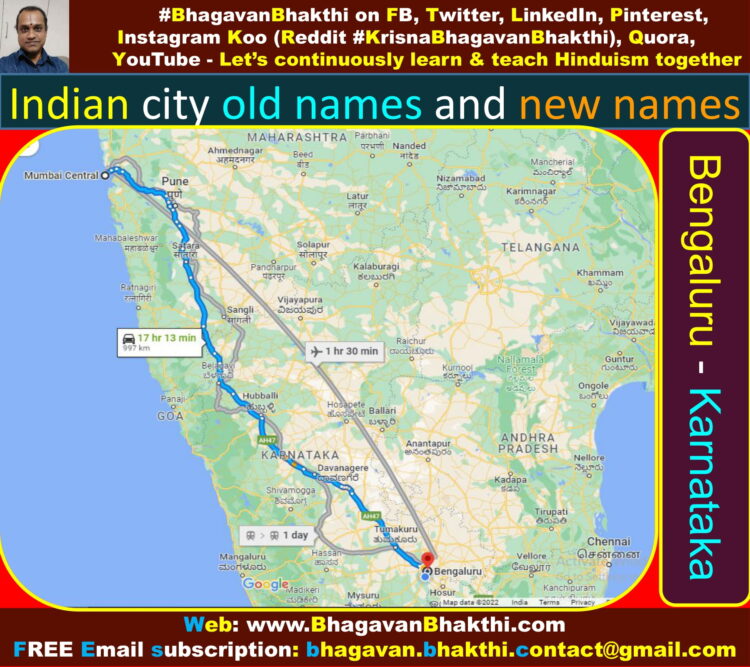 In 1624 A.D., Moradabad was captured by Rustam Khan, the then Governor of Sambhal who named it Rustam Nagar.

Later, in 1625 A.D., its named was again changed to Moradabad, after the name of prince Murad Baksh, the son of Mughal emperor Shah Jahan. 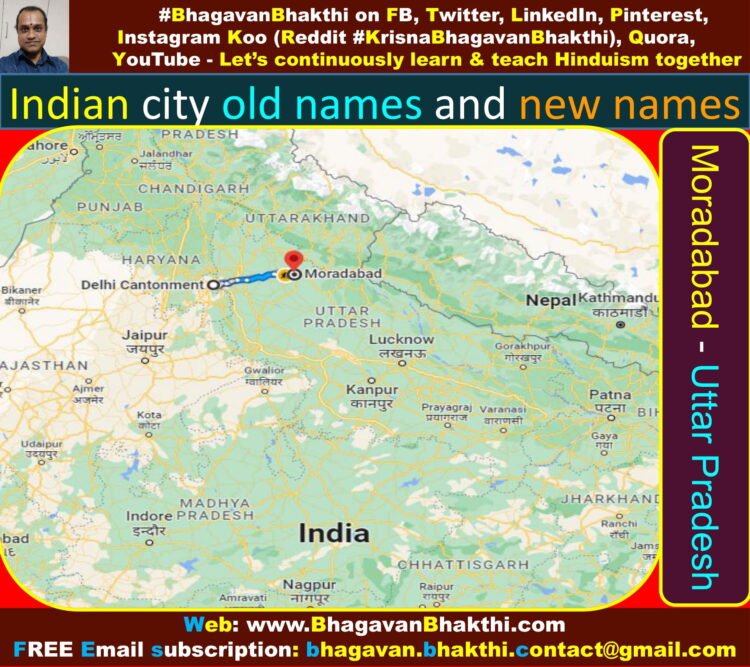 This means, ‘The City of Lord Ananta‘, referring to the deity of the Lord Sri Padmanabhaswamy Temple located in the city. 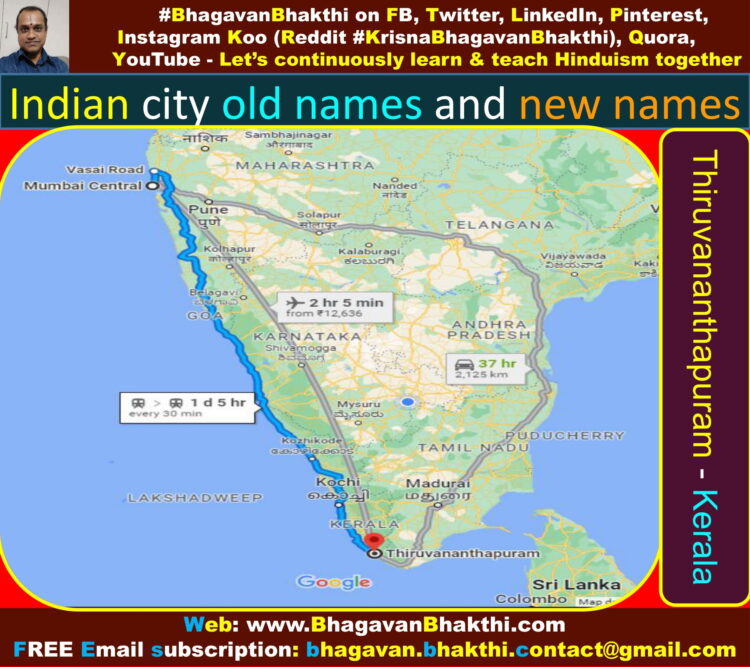 Prayagraj (Allahabad) : This is another holiest city of India and was now as ‘Prayaga (Prayag)‘. Now it is called as ‘Prayagraj‘.

This is the divine place where the Triveni sangam takes place.

That is, the confluence of Ganga, Yamuna and Saraswati rivers takes place in Prayagraj. 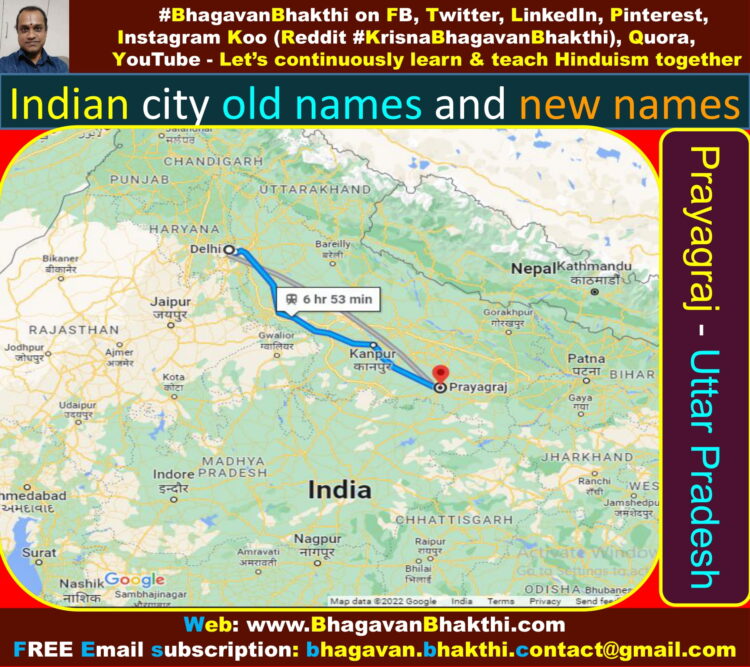 The earliest reference to Pune (Poona) is an inscription on a Rashtrakuta Dynasty copper plate dated 937 CE.

This refers to the town as ‘Punya-Vishaya‘, meaning ‘auspicious news’.

By the 13th century, it had come to be known as ‘Punawadi‘. 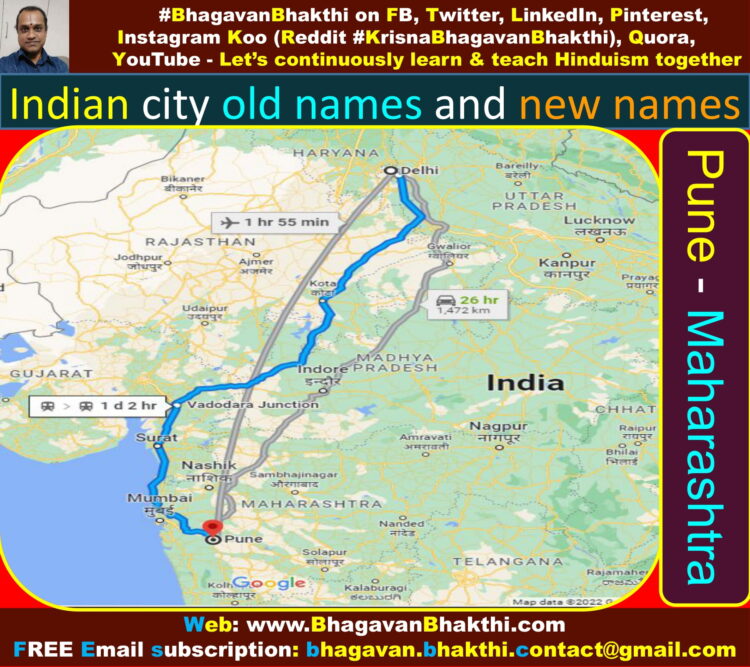 Mysuru : This place was known as ‘Mysore‘, few years back.

This city of Mysuru is the place where Goddess Sri Chamundi (Durga Devi) killed the demon Mahishasura.

This is also the place, where the demon Mahishasura was living. 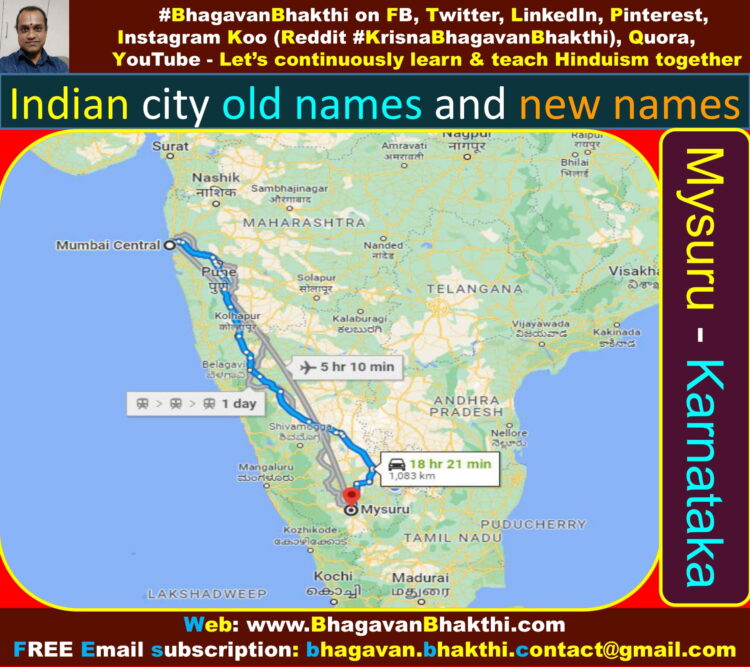 Chennai : This city was known as ‘Madras‘ or ‘Madras Patnam‘ earlier.

The name Chennai is derived from the Telugu language origin.

Chennai name was obtained from the name of a Telugu ruler called as Damarla Mudirasa Chennappa Nayakudu.

He was the father of Damarla Venkatapathy Nayak.

(A Nayak ruler who served as a general under Venkata III of the Vijayanagar Empire from whom the British acquired the town in 1639.) 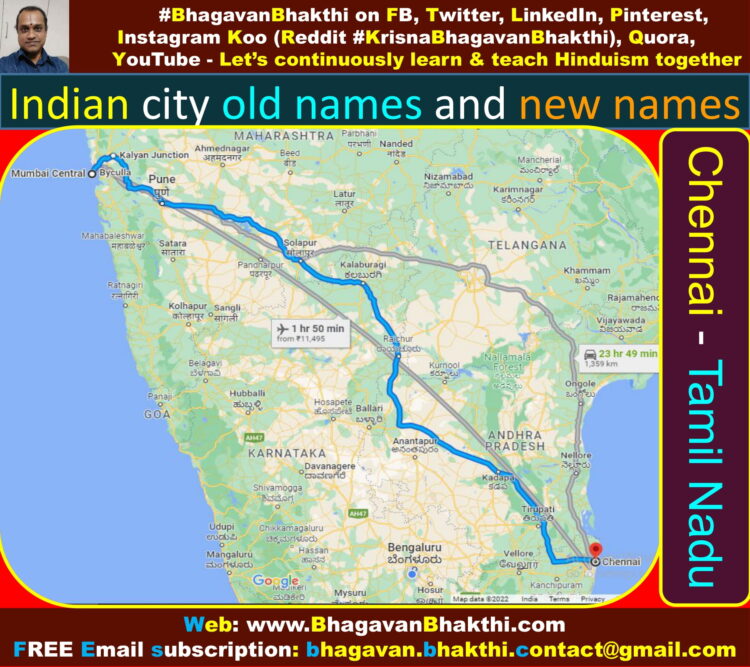 Mumbai : Because, Europeans were not able to pronounce the city name ‘Mumbai‘, it had become ‘Bombay’.

But now again, this name Mumbai has been reinstated.

The name Mumbai is derived from ‘Mumbā‘ or ‘Mahā-Ambā‘, that is the Goddess Mumba Devi. 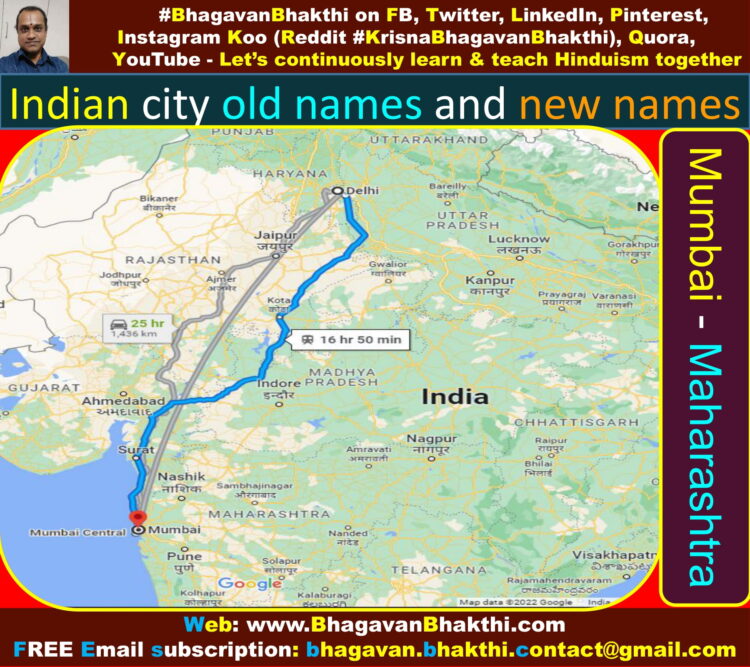 Mangaluru : Earlier this city was known as ‘Mangalore’.

This was because, Europeans were not able to pronounce the divine name ‘Mangaluru‘, they started to call it as ‘Mangalore’. 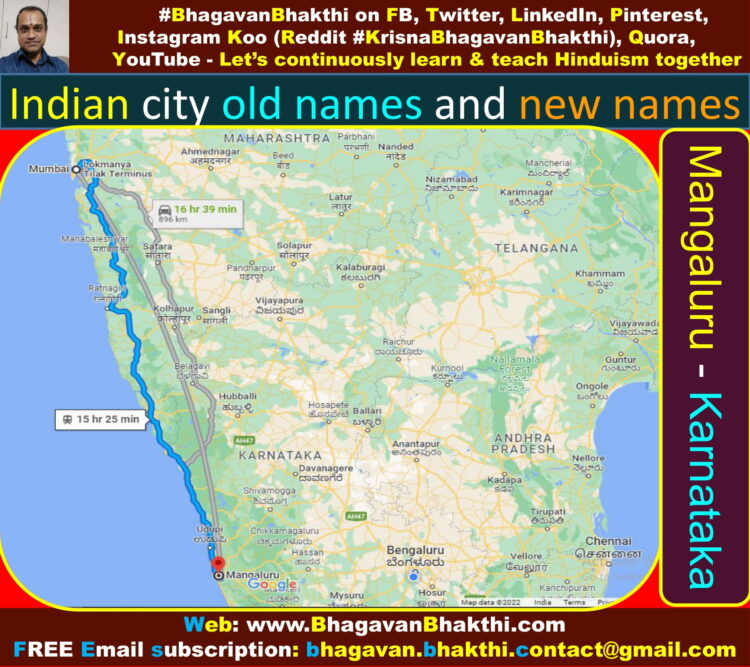 Kannur : The city’s old name is called as ‘Cannanore‘, is an anglicized form of the Malayalam name “Kannur”.

To explain in etymological way, the name Kannur may have been derived from ‘Kanathur‘, an ancient village in Kerala.

Also, there is an another opinion that the explains the place Kannur was originally a portmanteau derived from two Malayalam words ‘Kannan‘ (Lord Krishna), and ‘Oor‘ means a place.

These both words when combined gives a meaning Kannur, that is, ‘The place of Lord Krishna‘. 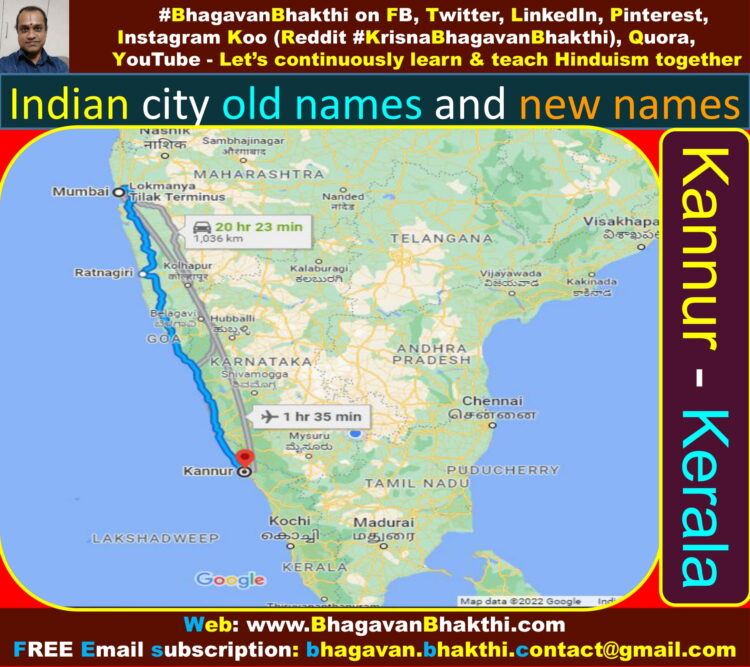 Kolkata : Same problem, Europeans were not able to pronounce this place as ‘Kolkata‘, and thus it had become ‘Calcutta’.

Now, the name Kolkata has be reinstated.

The name might have its origin in the words ‘khal‘ meaning ‘canal’, followed by ‘kaṭa‘, which means ‘dug’.

Also, as per another theory, the name Kolkata may have been originated from the Bengali term ‘kilkila‘ (flat area).

One more theory is that the name derives from ‘Kalighat‘.

There is another theory, that is, the area specialized in the production of quicklime or ‘koli chun‘ and coir or ‘kata‘; hence, it was called ‘Kolikata‘, which now is called as Kolkata. 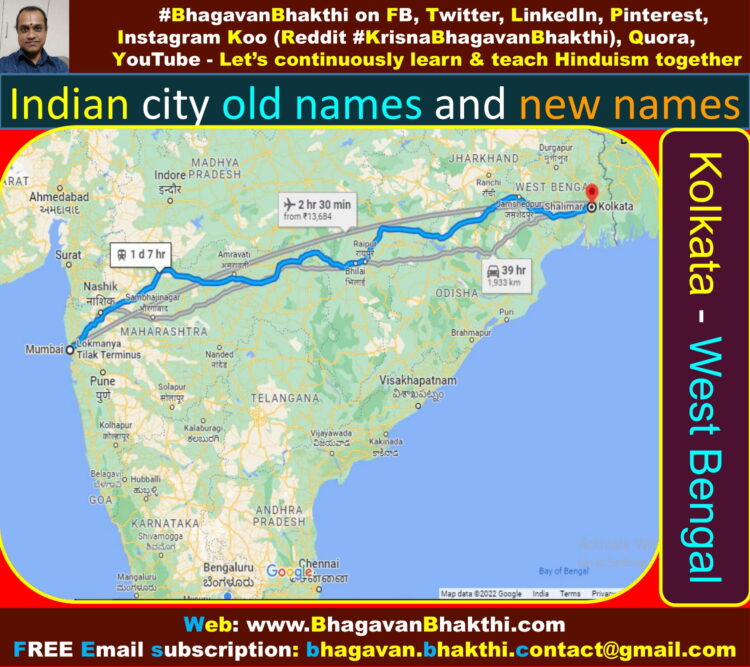 This name Desinganadu was kept after the king Jayasimha from whom the Venad dynasty is supposed to have originated.

One theory says that the name Kollam is derived from the Sanskrit term ‘kollam‘, which means pepper,

This may be because the place had been an ancient trading and exporting centre for pepper.

‘Kollam’ may also have been taken from the word ‘koyillam‘, a telescoping of ‘kovilakam‘ (palace) and ‘illam‘ (brahmin house). 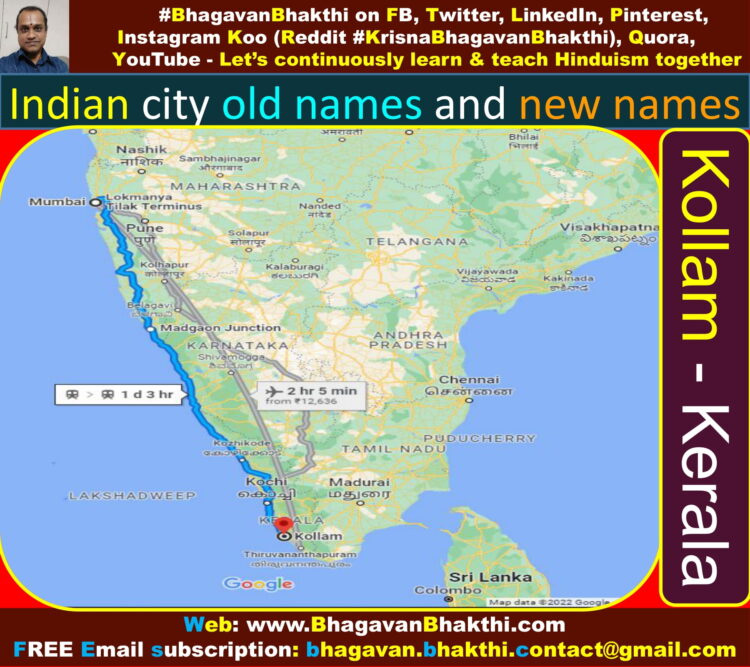 Kanpur (or Cawnpore) : In 1207, the local King, that is, Raja Kanh Deo of the Kanhpuriya lineage of Rajputs.

He established the city of ‘Kanhpur‘ and made it his capital, which later came to be known as Kanpur (or Cawnpore).

As said above, the name Kanpur is a incorrectly pronounced version of its original name ‘Kanhapur‘ (Lord Krishna’s city) given by the two rulers Hindu Singh of Sachendi and Ghanshyam Singh of Ramaipur.

The British officer Hobson Johnson found the divine word Kanhapur difficult to pronounce and he changed it to Cawnpore.

Now, it is known as the name as Kanpur. 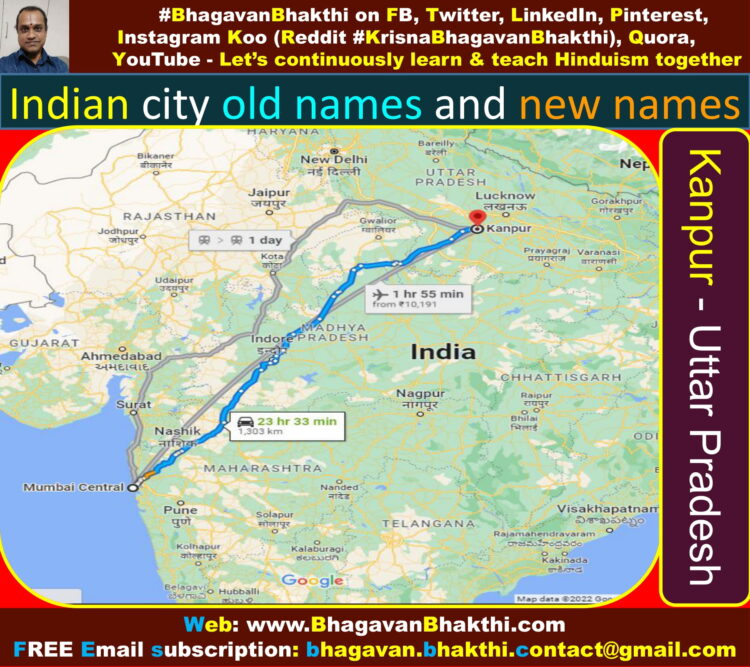 Vadodara : The city Vadodar was once known as ‘Chandravati‘, after the local King Raja Chandan.

Then later it came to be known as ‘Viravati‘, the abode of the brave.

And then it came to be known as ‘Vadpatra‘, because of the abundance of banyan trees on the banks of the Vishwamitri.

From Vadpatra, the present name Vadodara or Baroda name came into existence. 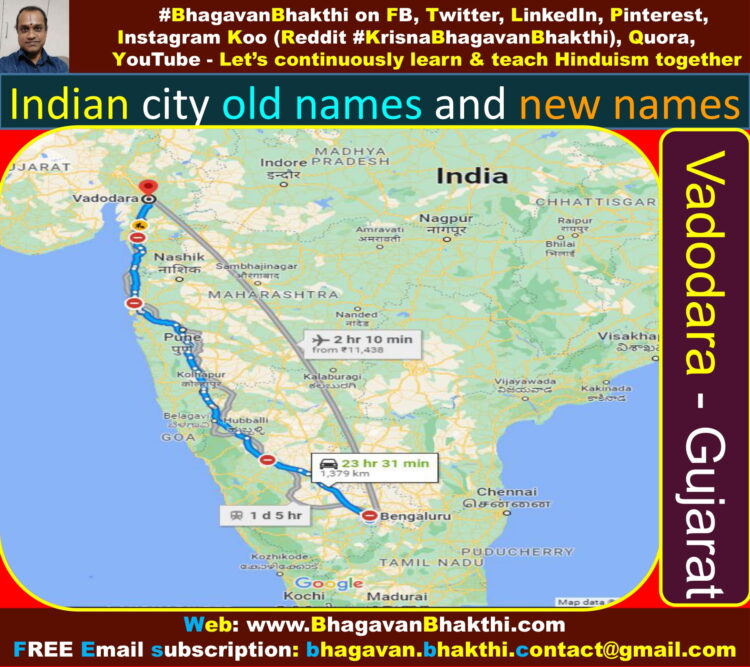 Alappuzha : This Alappuzha district is in Kerala. It was formed as ‘Alleppey‘ district on 17 August 1957.

The name of the place Alleppey, the mispronounced form was changed as ‘Alappuzha’ on 07.02.1990.

It is assumed that the name Alappuzha was derived by the geographical position and physical features of the place which means “the land between the sea and the network of rivers flowing into it”. 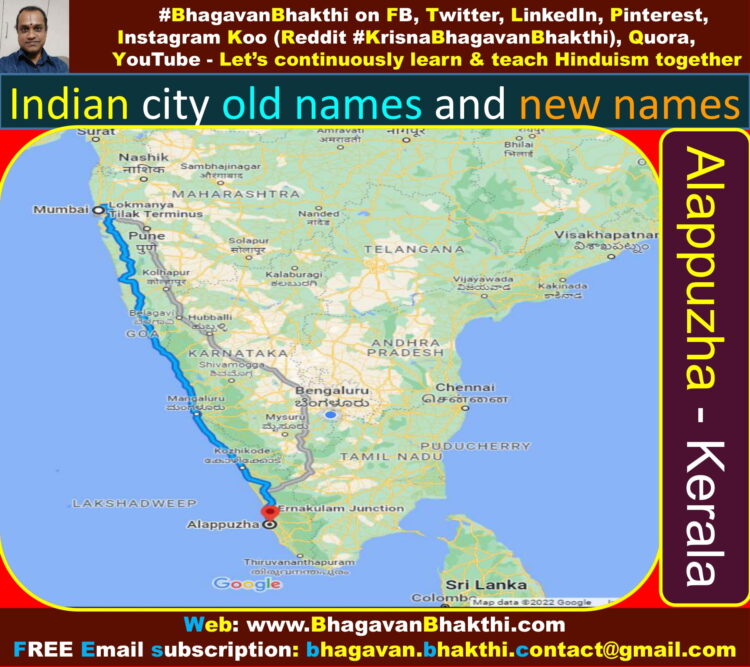 Lucknow : This city name is a mispronounced from the Sanskrit name ‘Lakshmanapuri‘.

According to legend, the Lucknow is named after Lakshmana, the brother of Lord Rama.

The legend states that, Lakshmana had a palace or an estate in the area, which was called Lakshmanapuri.

This name was also called as Lakhanpur or Lachhmanpur in 11th century, and later, Lucknow (Lakhnau). 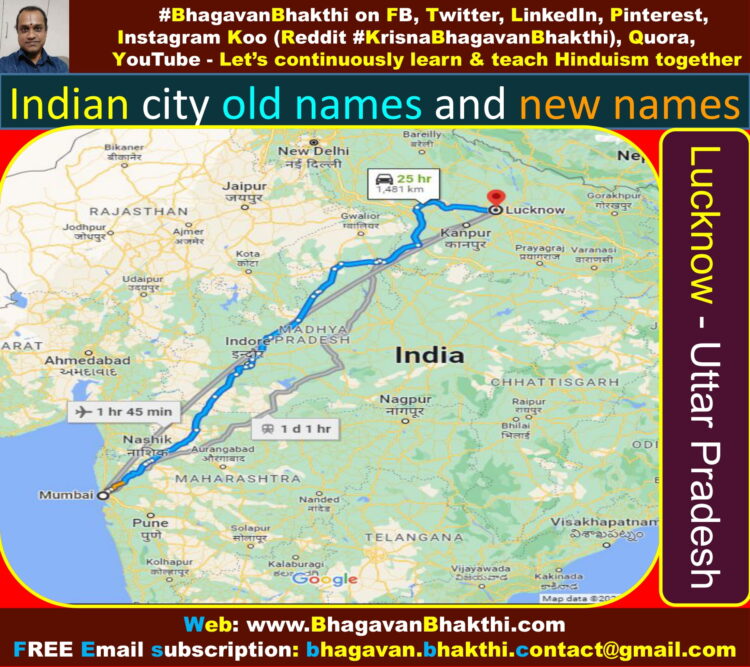 Kochi (Cochin) : This name Kochi is derived from the Malayalam word ‘Kochu azhi‘.

Because Europeans were not able to pronounce the word ‘Kochu azhi’, they made short as Cochin.

Now, the city is called as Kochi. 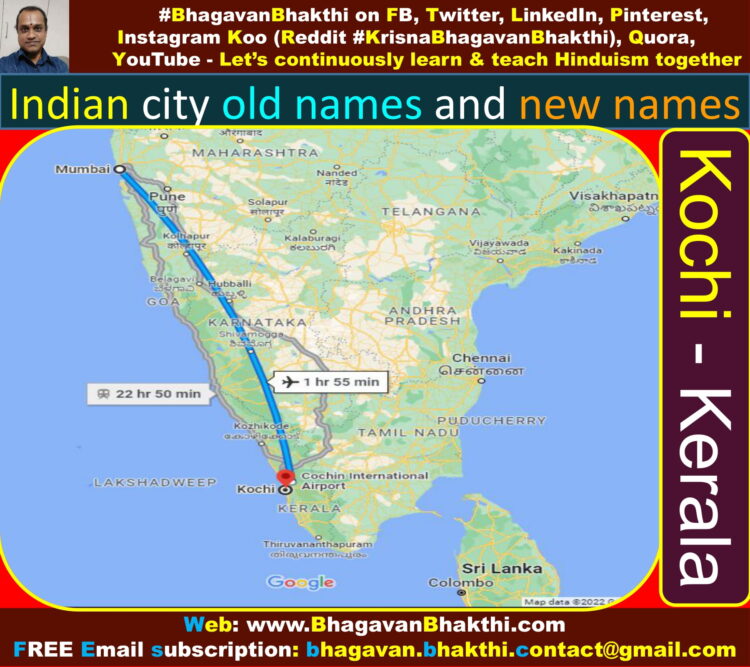 Few people say that Palakkad (Palghat) is derived from an indigenous tree called as ‘Pala‘.

This tree Pala was once densely occupied the local land and hence the name Palakkad (Palghat) came into existence. 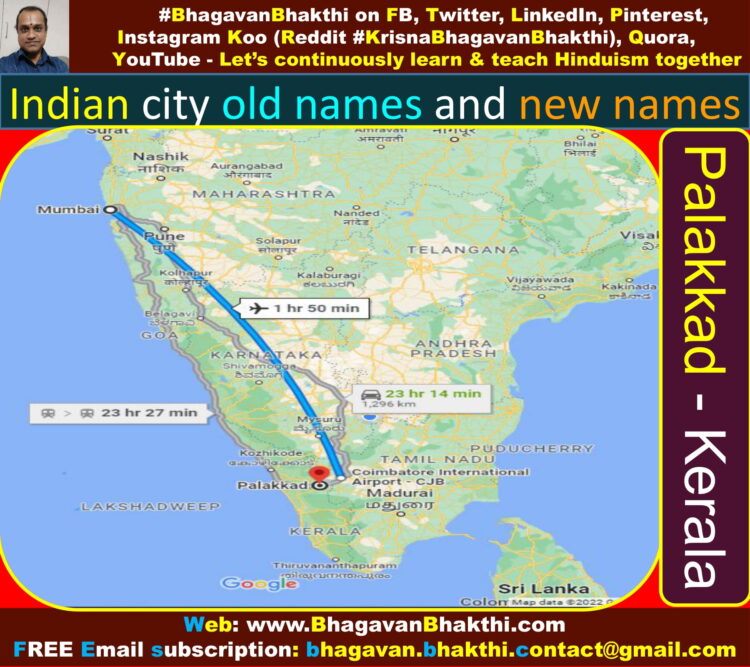 Thrissur (Trichur) : This city name Thrissur was known as Trichur, because of the Europeans bad pronunciation.

In 1990, this name Trichur was changed to Thrissur.

But, originally Thrissur was known as ‘Vrishabhadripuram‘, that is ‘Kailash of the South India‘ in older days. 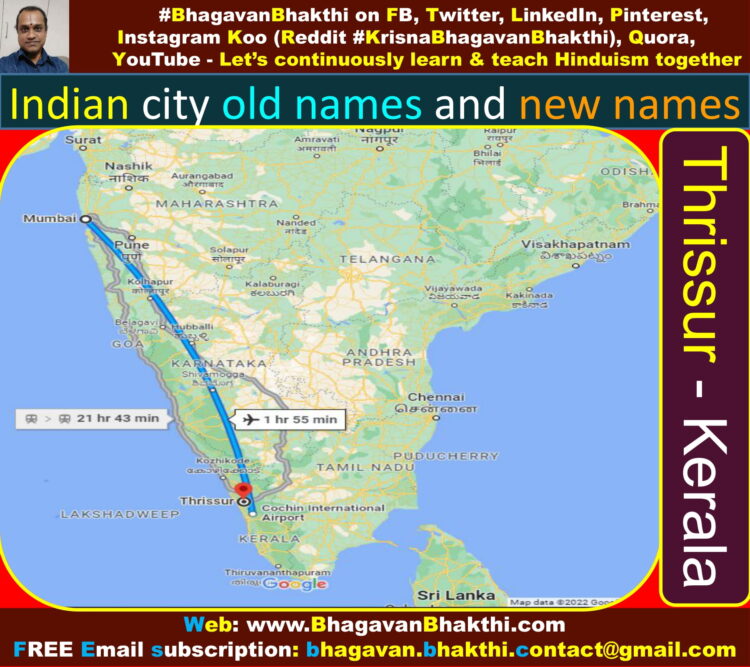 Thanjavur (Tanjore) : As Europeans were not able to pronounce the word Thanjavur, they pronounued this as Tanjore.

But the original name of Thanjavur (Tanjore) is derived from the name of a Mutharayar King “Dhananjaya” (Also called as Thananjay or Thananjaya).

If Oor (Means a place) is added to Dhananjaya (Thananjaya or Thananjay), it becomes Thanjavur (Tanjore). 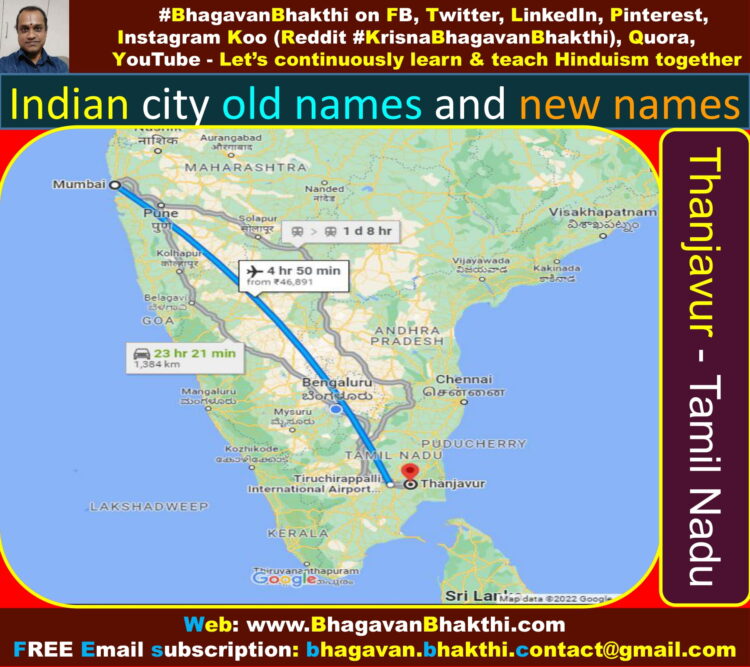 More information will be added to this on regular basis. Please visit after some time to get the updated information.

To know more information about Hinduism, please click the below link:

To know more information about Lord Krishna, please click the below link:

To know more information about Lord Rama, please click the below link: