What is Bheemana Amavasya festival 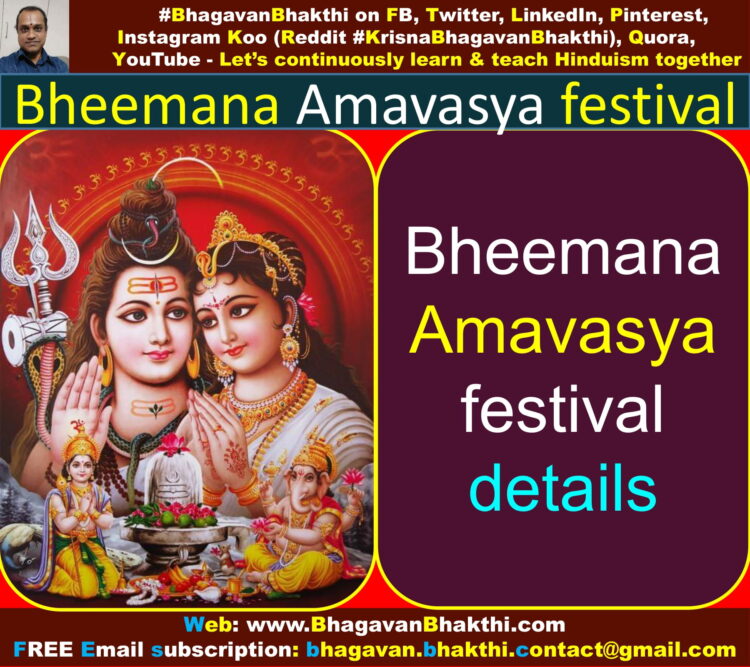 Let us know about this auspicious festival by taking one point at a time.

All the newly married women, in their first nine years of marriage has to perform this “Bheemana (Bhimana) Amavasya (Amavasye)” vrata (festival). 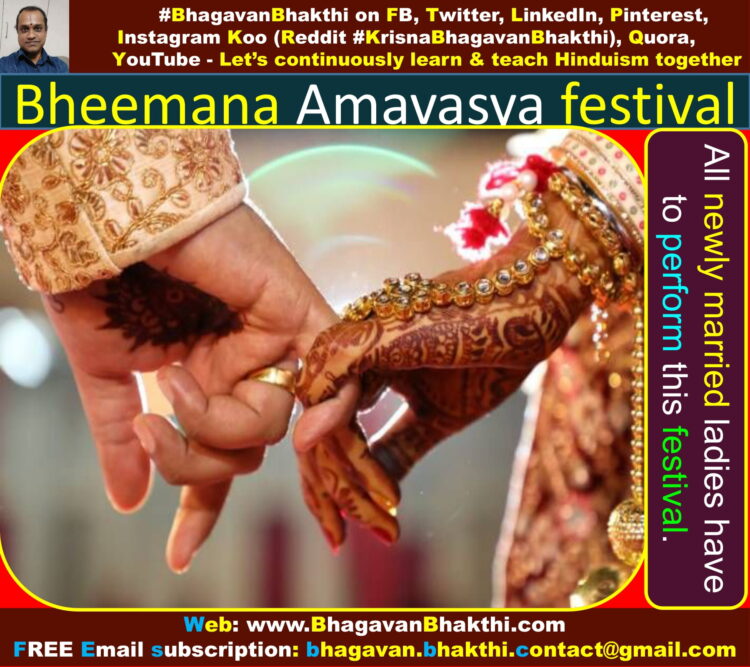 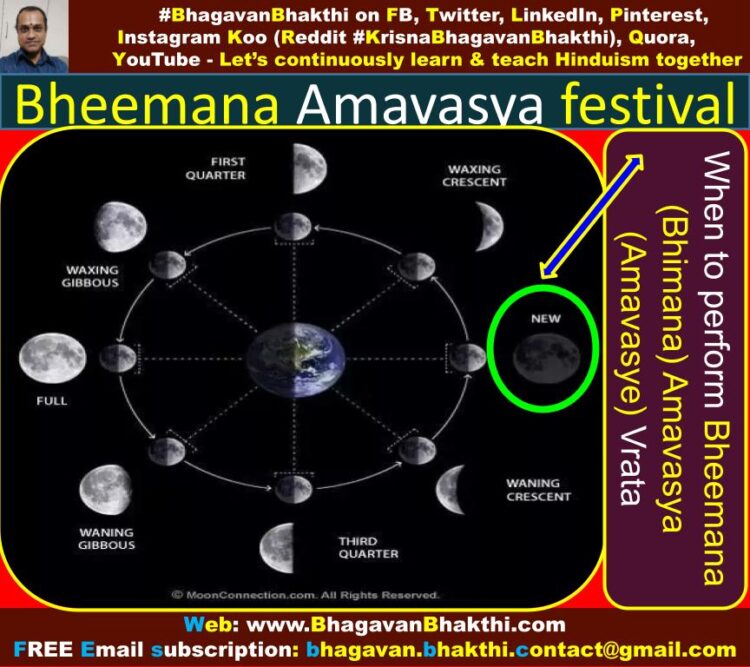 All the Hindu women who want their brothers, husband’s (and also other males in the family) welfare has to perform ‘Bheemana (Bhimana) Amavasya (Amavasye)‘ vrata (festival).

On this occasion, all the Hindu married women and also the unmarried girls and ladies pray for the below – 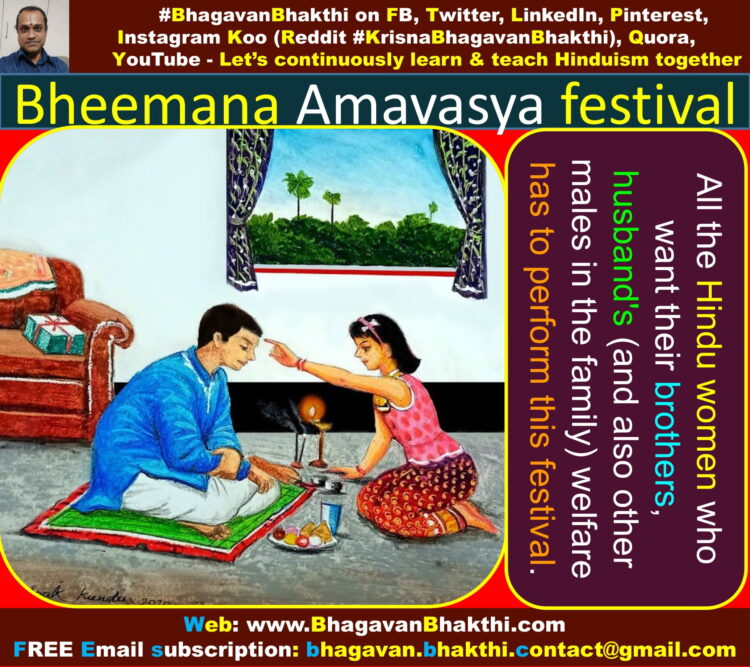 Lord Shiva is called as ‘Mano Niyamaka‘ (Controller of minds), as he is the controller of all the minds. 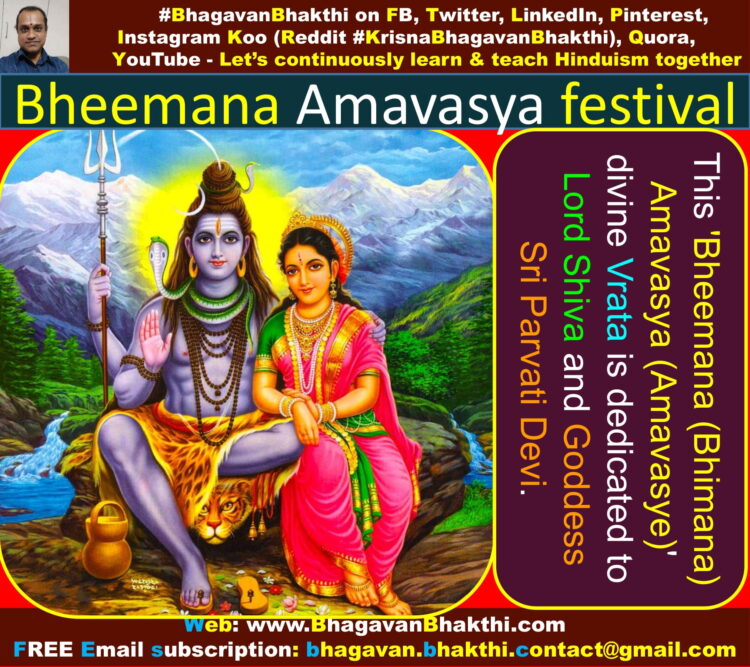 In Hindu shastras it is said that –

lighting of these deepa (diya) (lamp) kicks out all the negative effects from home & family,

One each deity of Lord Shiva and Goddess Sri Parvati Devi is made using mud.

Special pooja (worship) to Lord Shiva and Goddess Sri Parvati Devi is made to please both of them.

On this auspicious occasion day, in Karnataka special dishes like kadubu, idli, and wheat balls are prepared. 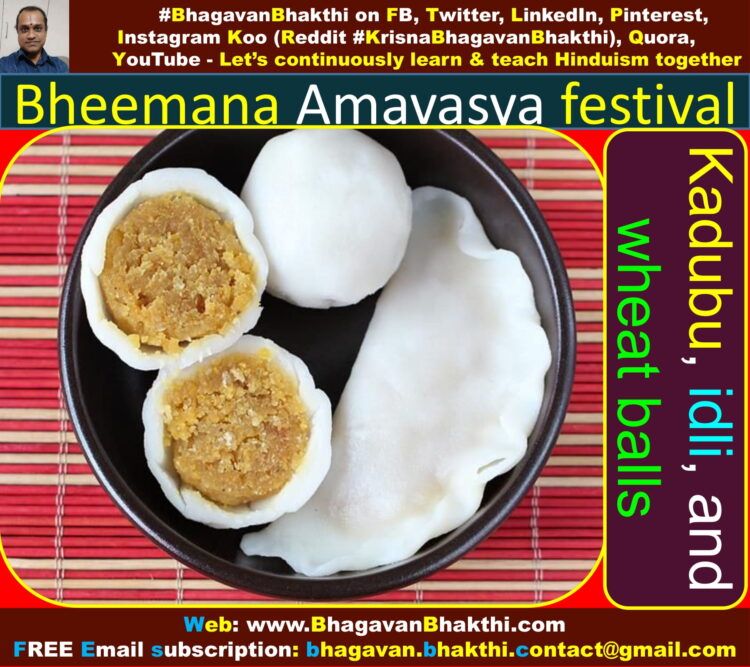 The noteworthy point to be noted here is, coins are kept inside the kadubu, idli and wheat balls.

Later all the male children will be asked to break the dish kadubu.

We need to keep ‘Bhandara‘ on both sides of the hostilu (at the bottom door) on betel leaves, betel nut, coins.

Later we need to apply turmeric powder (arishina pudi) and vermilion (kumkuma) powder to hostilu (both sides of the bottom of the door). 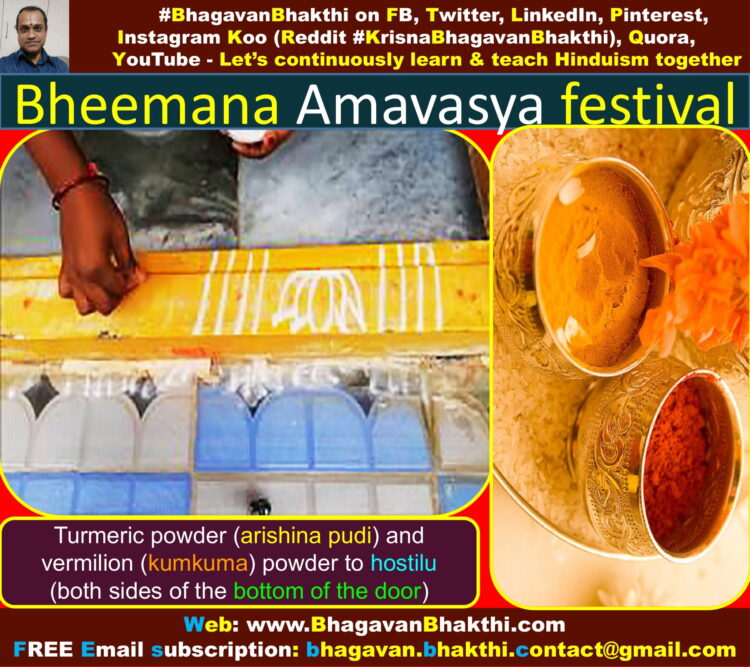 All the brothers are instructed to stand one by one at a time with their legs on either side of the hostilu (both sides of the bottom of the door).

And those males [brother(s)] has to break the Bhandara with his elbows.

And as that brother bends to break the Bhandara the sister(s) should bang the brother’s back with their elbows.

This is really a lot of fun to do, which in turn will be highly happy procedure with lots of entertainment, amusement, etc.

The Bhandara is stuffed with soaked Bengal gram or with coins.

(We should note that, on this auspicious occasion no items will be fried.) 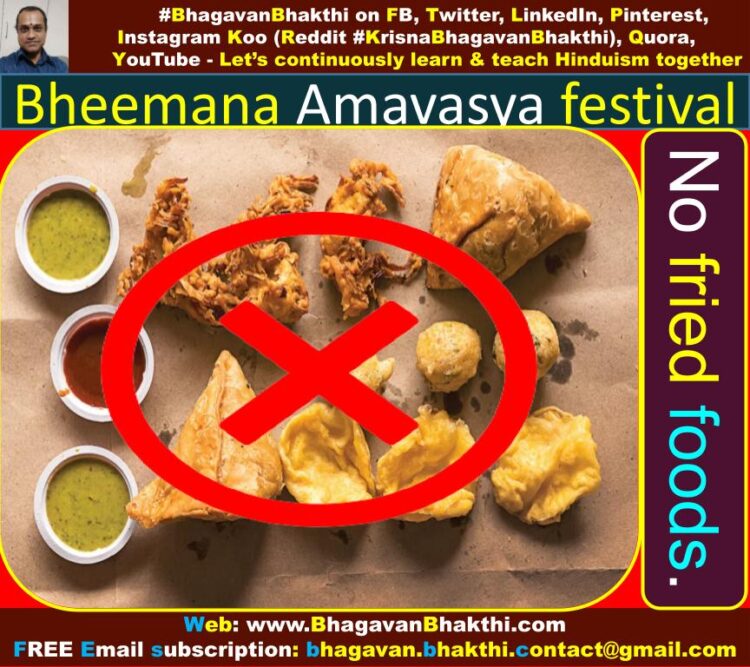 Once there lived a king whose son (the kingdom’s prince) had died untimely.

Just before the Prince’s death, the king had decided to marry him.

But, God’s will was something else.

But still, the King wanted his son to get married even after death in a grand manner.

Thus the king decides to get his died son married by announcing the special gifts to that family, who will give their daughter to get marry his dead son. 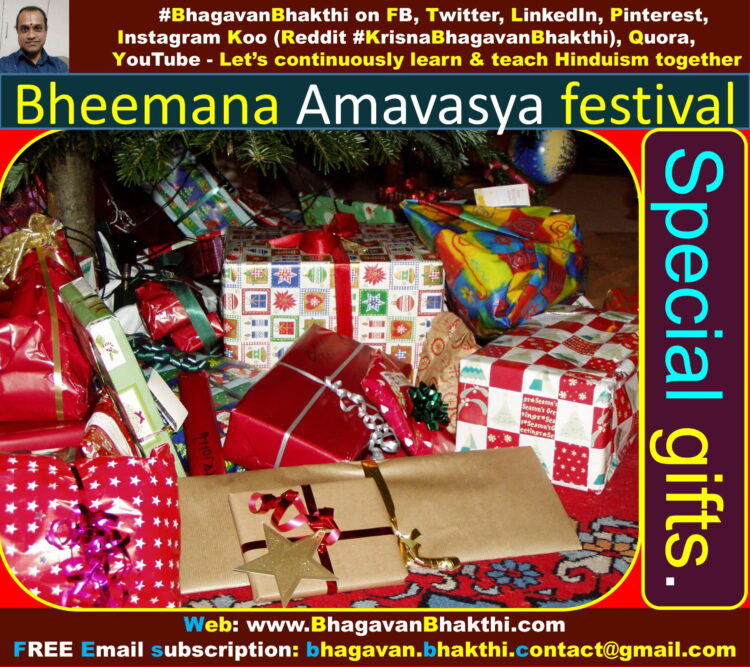 No one came forward for this unexpected procedure.

But, a very poor Brahmin comes forward to marry his daughter to the dead prince.

Thus finally the wedding was concluded.

That was a Amavasya day (new moon day).

Later, after the marriage was completed, the dead prince’s body was brought near Bhagirathi river for final rituals.

As the people were preparing the final rituals, thunderstorms and lightening started to strike along with heavy rains. 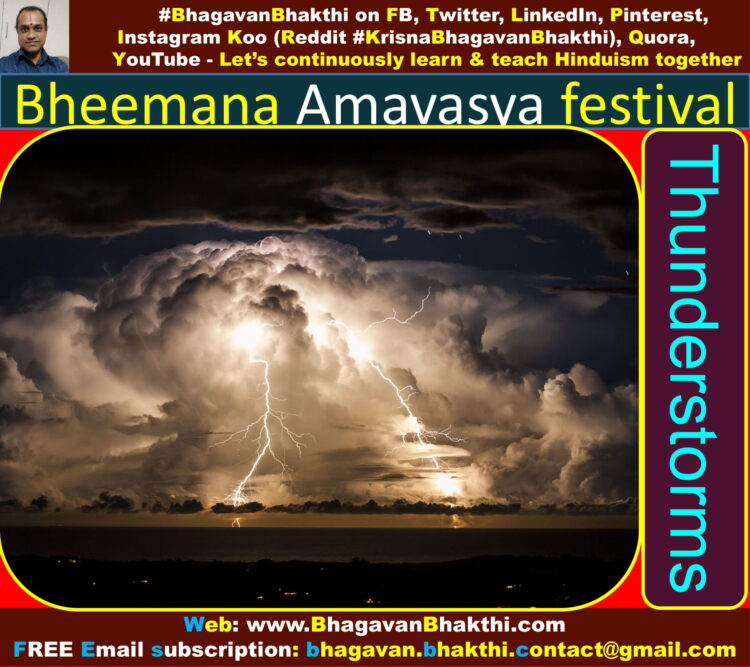 The local people got horrified and ran back to their homes, leaving the dead body and the newly wed girl there itself.

But this girl was a divine lady.

This was followed by her mother every year without fail.

The newly wed lady took bath in the Bhagirathi river and prepared two lamps and rolled out fiber of a plant to form the wick for the lamps.

The poor women poured water into the lamps and did Bhandara with Mud as there was no rice or wheat available at that time.

Lord Shiva and Goddess Sri Parvati Devi were the silent spectators for all her activities and were highly pleased with her devotion and thus blessed her. 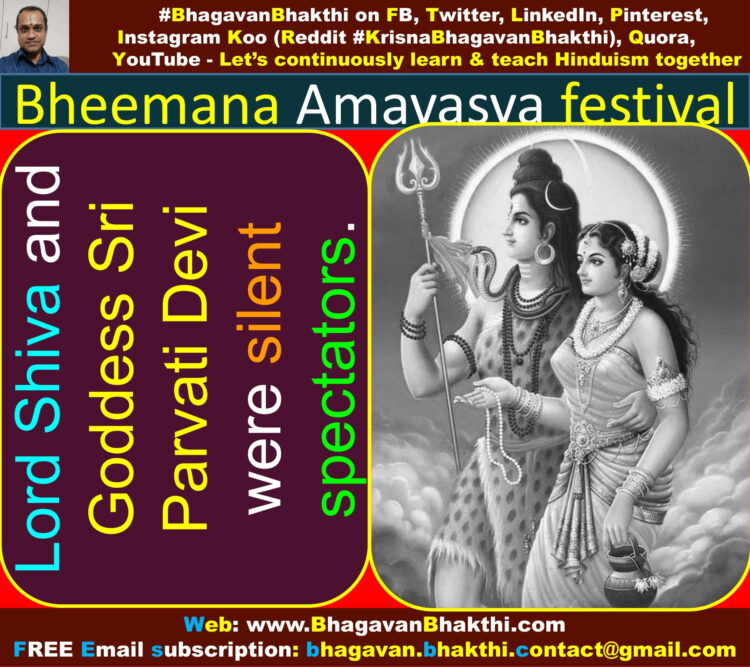 The newly wed girl finished her pooja (worship) with whatever things that was available at that place and time.

Lord Shiva broke the mud balls (Bhandara) and urged her to ask for a boon.

The newly wed girl requested Lord Shiva and Goddess Sri Parvati Devi to bring her husband back to life. 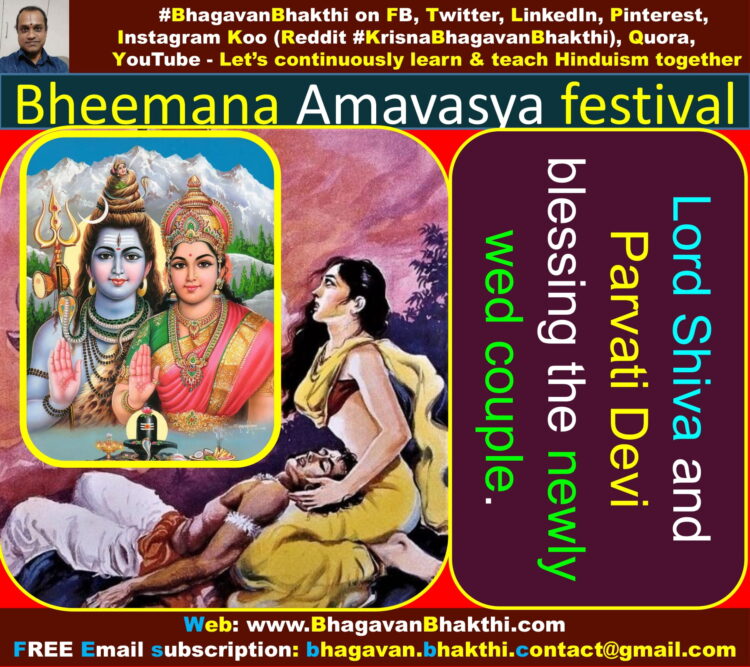 Next day all the local people were surprised and also happy and witness the prince alive and they took the two back in a great procession and they lived happily ever after.

But the final question will remain with us as given below:

Bhima (Bheema) is one of the name of Lord Shiva and he is the main god for ‘Bheemana (Bhimana) Amavasya (Amavasye)‘ Vrata (festival). 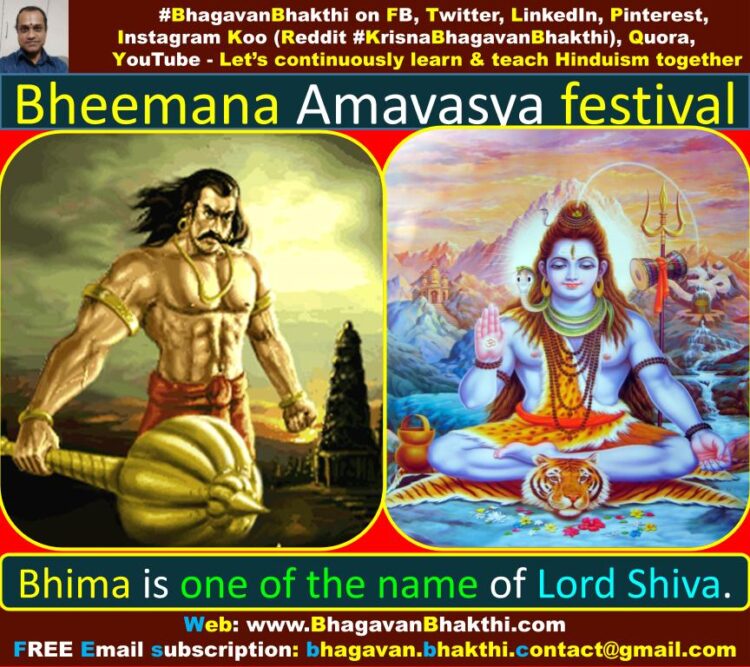 To know more about Kashi (Varanasi / Banaras), please click the below link:

To watch the video about “Gyanvapi masjid (Kashi Vishwanath) facts with images“, kindly click the below YouTube video link: