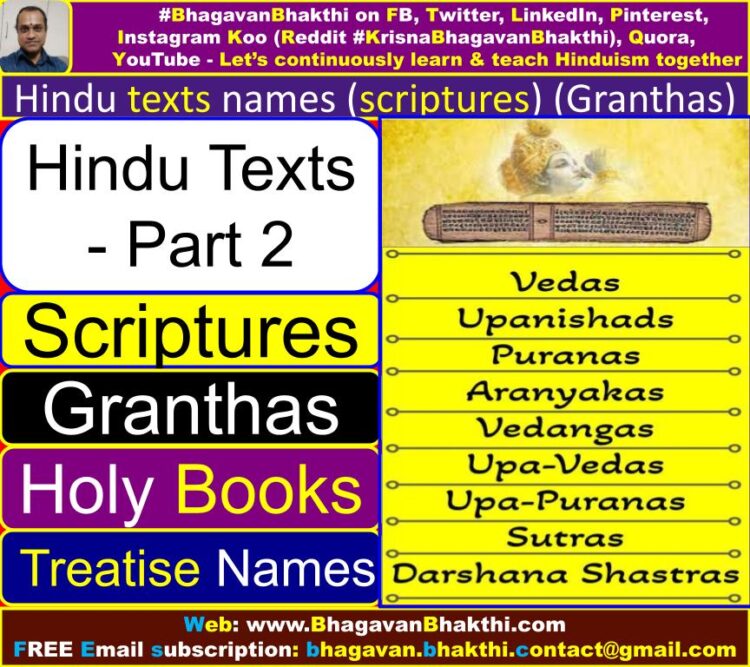 Sometimes, this Upanishad is also known as ‘Amrita-Nada-Bindu Upanishad‘. In Sanskrit it is written as अमृतनादबिन्दोपनिषद् (amr̥tanādabindōpaniṣad).

This texts compares both to the ॐ (ōṁ) symbol and the Samkhya (Sankhya) theory of three Gunas.

Also, this scriptures asserts true Yoga involves meditation and renunciation from all attachments to material things.

Dhyanabindu Upanishad talks about the meditation in Yoga. It narrates that silence during meditation is prompting of the infinite subtleness.

Also Dhyanabindu Upanishad gives importance about an Atman (soul) in every living being, and that a Yogi must explore to understand both the part as well as the whole of everything.

The Brahmavidya Upanishad mainly describes the form of ॐ (ōṁ), features of the sound ॐ (ōṁ), its placement, its start and end, and the importance of the Laya (rhythm) (disappearance of ॐ (ōṁ) sound).

Atmabodha Upanishad starts with a shloka (hymn) about Lord Sri Vishnu (Narayana). Eventually it focuses on its crucial theme of Atmabodha, that is, about “State of knowledge of the inner self“.

The Atmabodha Upanishad continues to speak about the “antar brahman“, that is, the innermost Lord Sri Vishnu (Brahman) (irrevocable reality).

Naradaparivrajaka Upanishad explains the rites of passage in relationship with renunciation and the life of a monastic path as a sannyasi (sanyasi) in Sanatana Dharma (Hinduism) Ashrama (Ashram) tradition.

The Trishikhabrahmana Upanishad talks about the non-relative nature of the metaphysical reality of Brahman (Lord Sri Vishnu), Atman (soul), and explains eight limb yoga as a means to self-knowledge.

In Sita Upanishad Goddess Sri Sita Devi is praised as the Supreme Reality (After Lord Sri Vishnu) of the Universe (Brahman), the basis of Being (Spirituality), and material cause behind all manifestation.

The Yogachudamani Upanishad narrates about the goal to attain the Kaivalya (Moksha / Liberation).

This text of Yogachudamani Upanishad also explains about the following:

Mandala Brahmana Upanishad explains Yoga as a path to self-knowledge, that is, the supreme wisdom.

Mandala Brahmana Upanishad is about the teaching of Lord Narayana (Vishnu / Purusha) to Rishi Yajnavalkya.

Sharabha Upanishad praises Lord Shiva as the Lord of the world who incarnates himself as a Sharabha, that is, as a human-lion-bird form.

Lord Skanda in this Upanishad of Skanda Upanishad is also described as consciousness, Atman (soul, self), and Lord Shiva.

(Note : We should always remember that all the names like Skanda, Shiva, Brahma, Lakshmi, Indra, etc. etc. etc. are the names of Lord Sri Vishnu himself.)

(And thus Lord Sri Vishnu is always the Supreme and this is the inner meaning of the above.)

Advayataraka Upanishad discusses about Guru (teacher). This text talks about the three goals of introspection, Taraka yoga and the advaita (nondual) nature of Reality (Brahman).

Lord Hanuman says that Lord Sri Rama is the supreme Brahman and is the सचिदानन्द मूर्ति (satcitananda murti).

Including both of the above will make the full Rama Tapaniya Upanishad. This texts narrates Lord Sri Rama as as the Atman (soul, self) and the Brahman (Supreme Reality).

(Note : Urdhva Pundra means the upward (Urdhva) three lines which many Vaishnavas apply on their forehead and also on different parts of the body.)

This text of Mudgala Upanishad discusses about the Purusha Sukta of Rigveda.

As per Mudgala Upanishad Lord Narayana (Vishnu) is the Brahman (Supreme God) and he created the universe, then became himself the Atman (soul) in individual living beings.

The Shandilya Upanishad mainly explains about Yoga techniques. And this text is among the most detailed in the Upanishad that is dedicated to Yoga (Yogasana).

And also it describes about the 3 Pranayamas (Breathing Yogasanas), 5 Pratyaharas, 5 Dharana, 2 Dhyanas (meditation) and also about one Samadhi.

Paingala Upanishad is presented as a dialogue from the Vedic Rishi Yajnavalkya to his student Paingala.

Paingala was a student of Rishi Yajnavalkya for 12 years. The Paingala Upanishad states from the Vedas, about the Principal Upanishads such as the Katha (कठ) Upanishad and early medieval era Smriti texts.

Here, Bhikshuka = mendicant or Hindu Monk, that is, a “Monk (Bhikshu) who lives entirely on alms“.

Bhikshuka Upanishad explains 4 kinds of Sannyasis (Sanyasis), about their eating habits and also about their lifestyle.

This is that Upanishad which teaches about “वसुधैव कुतुम्बकं” (“Vasudaiva Kutumbakam“), that is, “Whole world is one family“.

Shariraka Upanishad and also the Garbha Upanishad, gives importance about the relation between ‘manushya anga‘ (human body) and ‘manushya atma‘ (human soul), where and how one relates to the other, and what happens to each at birth and after death.

The Yogashikha Upanishad is written in the poetic style. This text discusses about the role of yoga in achieving Moksha (Liberation), that is, while living (Jivanmukta) itself, but it contrasts to Videhamukti (liberation in afterlife).

This Upanishad explains about the nature and life of a self-realized Sannyasi (Sanyasi) (Hindu Monk) called Turiyatita-Avadhuta.

This text explains about Sannyasi (Sanyasi) (Renouncer), about his various characters and his state of existence as he leads the Sannyasa (Ascetic) life in the Ashrama tradition.

These Sannyasis pick up food wherever they can find it.

These Sannyasi (Paramahamsas) (Highest Ascetics) beg for food and water from all four castes without discrimination (But these four castes people should follow the right Dharma).

The Akshamalika Upanishad talks about various types of rosaries, their importance, the relevant mantras, and the symbolism.

ॐ (ōṁ) is equated as the imperishable truth and sound, the source of the universe, that is, Lord Sri Narayana (Vishnu), the Atman (soul) that resides in everyone’s heart.

This Upanishad explains about the five types of delusions, asserting the Vedanta doctrine.

The Annapurna Upanishad says about Jivanmukti, that is, achieving freedom in the life, and the characteristics of those who reach self-knowledge.

In this Surya Upanishad, Atharvangiras to whom the Atharvaveda is attributed, extols the virtues of Lord Sri Surya Deva (Sun god).

Surya Upanishad, asserts the text, Lord Sri SuryaNarayana (Lord Sri Vishnu) is the creator, protector, and destroyer of the universe.

Akshi Upanishad talks about the Caksusmati Vidya and also discusses about Atman, Brahman, Yoga, seven steps to reach a dispassionate view of life and freedom, and the प्रणव मन्त्र (praṇava mantra), that is, ॐ (ōṁ) mantra.

The Kundika Upanishad talks about when and how someone may become a Sannyasi (Renouncer).

This Upanishad says that everything in the universe is a manifestation of the masculine Savitru (Lord Sri Surya Narayana) and also elaborates about the Gayatri Mantra.

2(77). Pashupatabrahma Upanishad : This text in simple words is written as Pashupata Upanishad.

The Pashupatabrahma Upanishad discusses the questions addressed to the creator god Lord Sri Brahma Deva by his son Rishi Vaishravana.

The Upanishad talks about the atma (soul) as Hamsa, yoga, meditation, the uselessness of external customs and the need for inner reflection with the help of ॐ (ōṁ), and also discusses about how a man of real wisdom should behave.

This text basically explains about the tradition of the sacred thread (janeu / Yagnopaveetham) and topknot hair tuft worn by common man and why both are abandoned by a Sannyasi.

The Parabrahma Upanishad narrates about the knowledge of the inner sacrificial string of the Sannyasi (Renouncers).

The Brihad (Major) part explains about the nature and attributes of an Avadhuta (A liberated person).

The Laghu (Minor) part is a short allegorical synopsis of the eight limb Yoga, that the text asserts is part of the Avadhuta lifestyle.

Tripuratapini Upanishad is related to Devi (Goddess) and Tantra. This text narrates that the universe was created by the unification of Lord Shiva and Goddess Shakti.

All that is existing is interdependent on both the masculine (Lord Shiva) and feminine (Goddess Shakti).

Devi Upanishad text narrates that the Goddess (Devi) is the Supreme Brahman and from her arise Prakṛti (matter) and Purusha (consciousness).

Devi (Goddess) is bliss and also the non-bliss, Vedas and what is different from it, the born and the unborn, and all of the universe.

This Upanishad says that the Goddess Tripura Sundari as the Supreme Shakti (Power) of the universe and also is described as the Ultimate Consciousness, above Lord Sri Brahma Deva, Lord Sri Vishnu and Lord Shiva.

Katharudra Upanishad is a small Upanishad. Information about Lord Sri Brahma teachings about Atman is present in this text.

Bhavana Upanishad explains about the human body to be the श्री यन्त्र (Sri Yantra) or श्री चक्र (Sri chakra).

This is done by mapping each part of the body to the chakra. This Upanishad also narrates that the Shakti is the Atman (soul) within.

This text eulogizes Lord Shiva and Goddess Sri Uma Devi (Parvati) as inseparable and also asserts that they together manifest as all Gods and Goddesses, all animate and inanimate reality of the universe.

This text is very important as it gives information about the Kundalini Yoga, and also explains about the Hatha Yoga and Lambika Yoga.

While the last chapter is basically about the quest of self-knowledge, Atman, Brahman and living liberation.

Bhasmajabala Upanishad explains about the Bhasma (Vibhuti) (Sacred ash), and also about the Rudraksha beads as symbols and for body art.

This Upanishad narrates how the Bhasma (Ash) and Rudraksha beads are to be produced, its application on the body.

The importance of holy city of Kashi (Varanasi) and Lord Shiva temple are mentioned in the text.