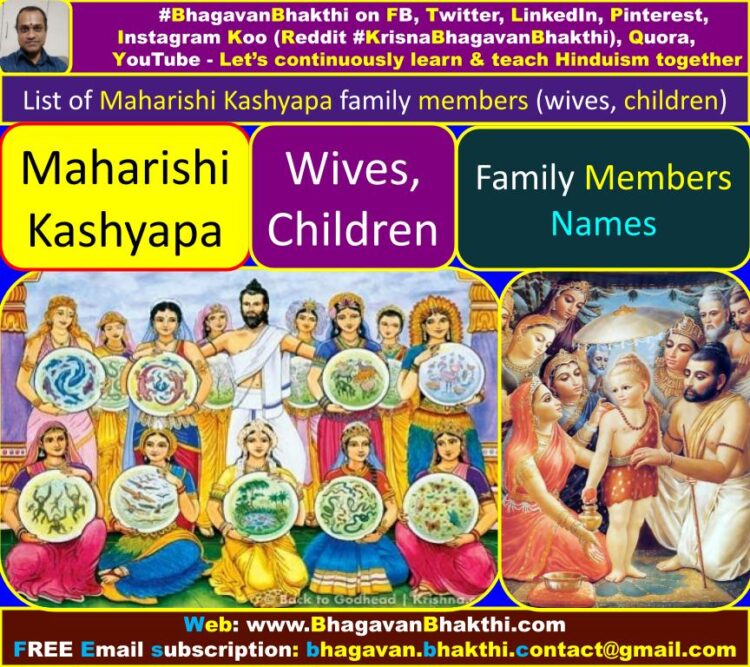 Maharishi Kashyapa is the one among the greatest Sapta Maharishis.

He is well known for his numerous Sanskrit texts and Indian Dharmic granthas (Hindu divine books).

Maharishi Kashyapa is the most ancient Maharishi listed in the colophon verse in the Brihadaranyaka Upanishad.

List of Maharishi Kashyapa’s wives names are as given below:

All the above said divine ladies gave birth to different ‘jeevas’, that is, living beings.

Starting from Devatas (Demigods), Demons, animals, plants, trees, insects, etc. etc. etc. all were given birth by these 13 wives of Maharishi Kashyapa.

Now, let us know the children names of these 13 wives of Maharishi Kashyapa one by one.

List of Maharishi Kashyapa children names are as given below:

1. Aditi : Her sons were the twelve Gods known as the Adityas. 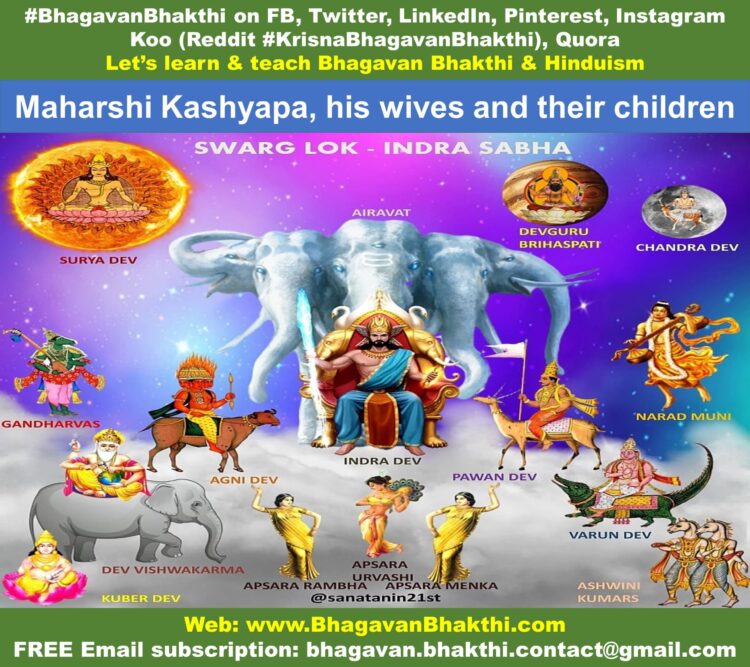 They were named as Hiranyaksha and Hiranyakashipu, and amongst their descendants were several other powerful Daityas like: 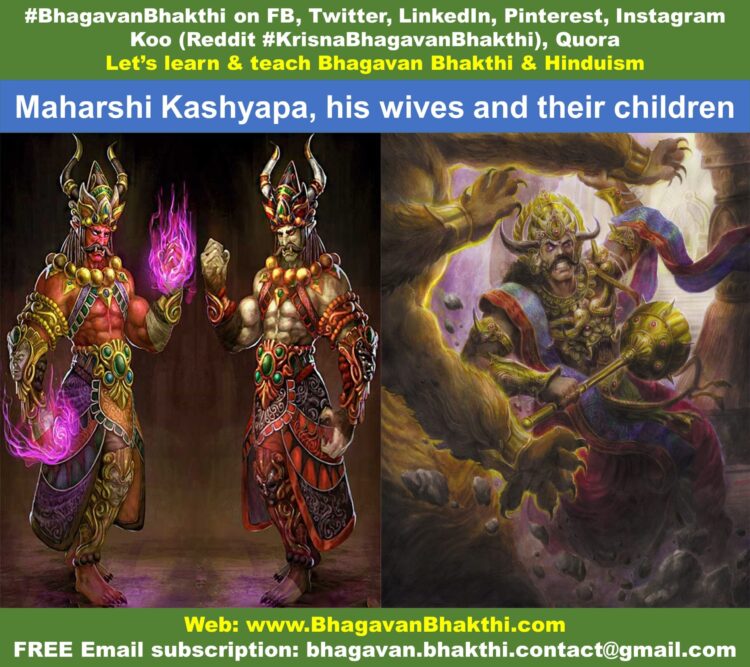 Diti also had a daughter named Simhika (Also called as Holika) who was married to a Danava (demon) named Viprachitti.

3. Danu : She had hundred sons of and they were came to be known as Danavas.

The Danavas were thus cousins to the Daityas and also to the Adityas. 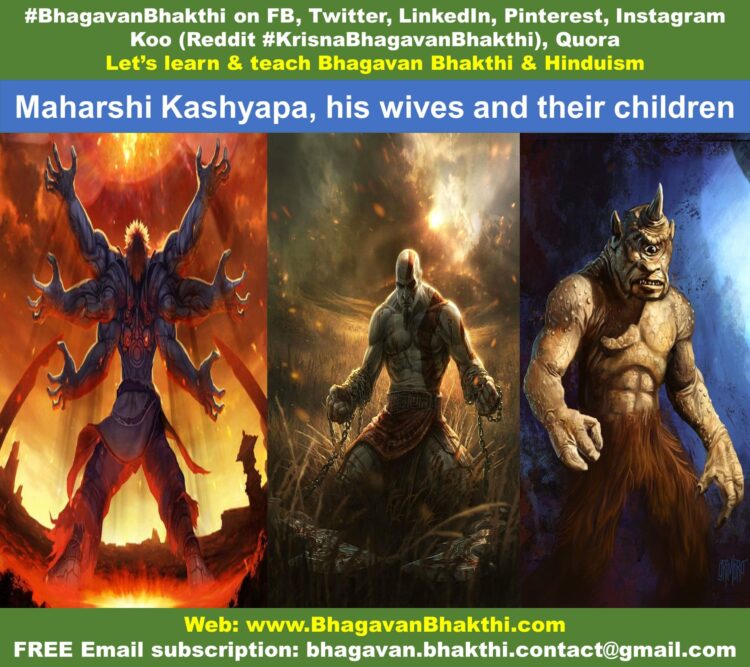 4. Arishta : Her sons were the Gandharvas (Singers and dancers of Svarga Loka / Heaven).

Duryodhana is the form of Kali Yuga’s Kali and Dushasana was the form of Meghanatha (Indrajeeta) of the Ramayana fame (Ravana’s eldest son). 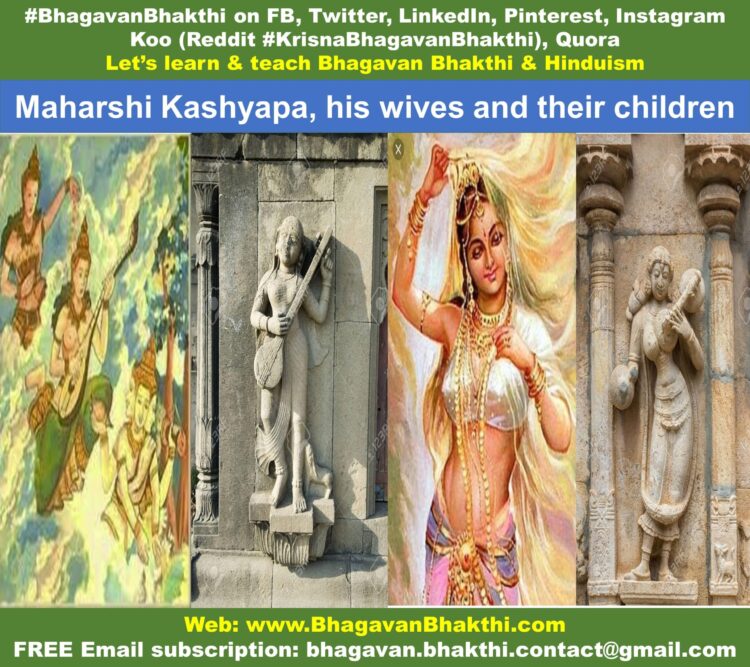 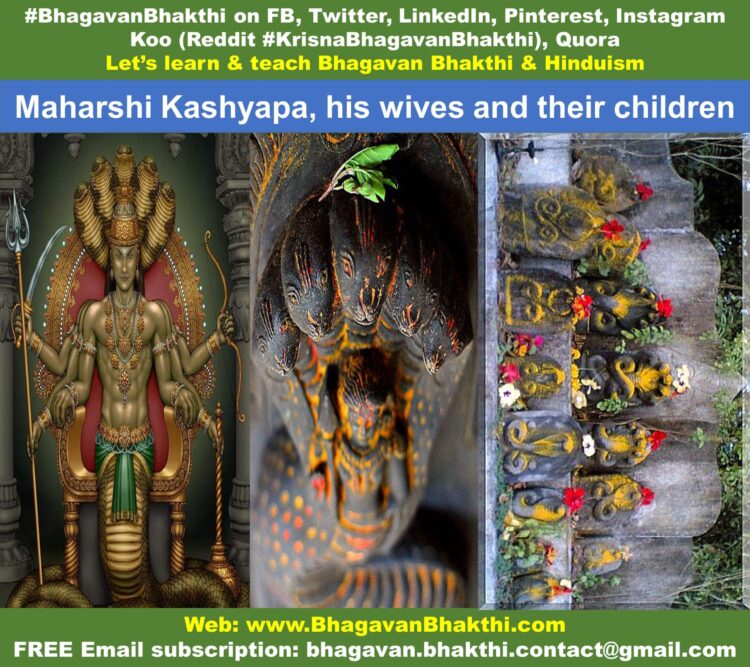 6. Khasa : Her children were the Yakshas.

(Demi-gods who were the companions of Kubera, the god of wealth).

And the Rakshasas (demons) were also Khasa’s sons. 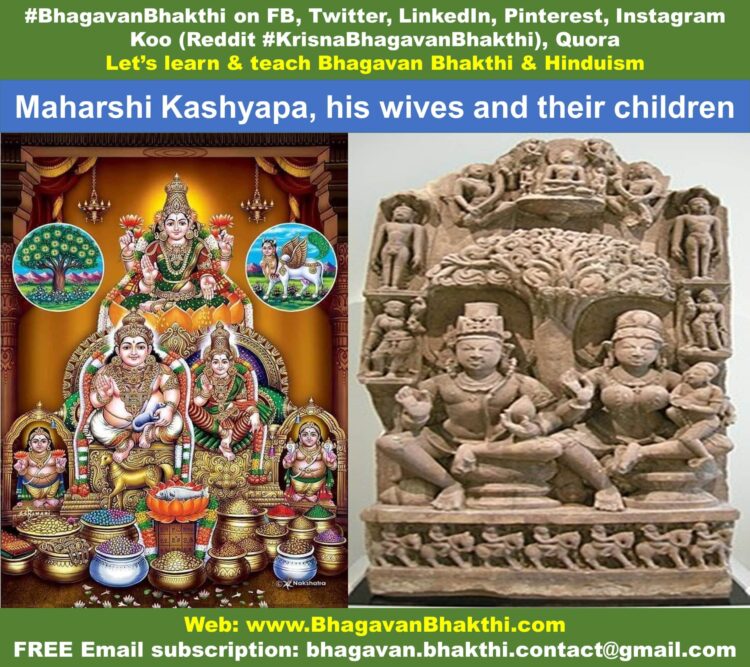 7. Surabhi : Her descendants were cows and buffaloes.

Other names are Sabala and Matrika.

Kamadhenu is regarded as the divine mother in Hinduism of all cows.

Like Kamadhenu’s daughter Nandini, Kamadhenu could grant a wish to any true seeker. 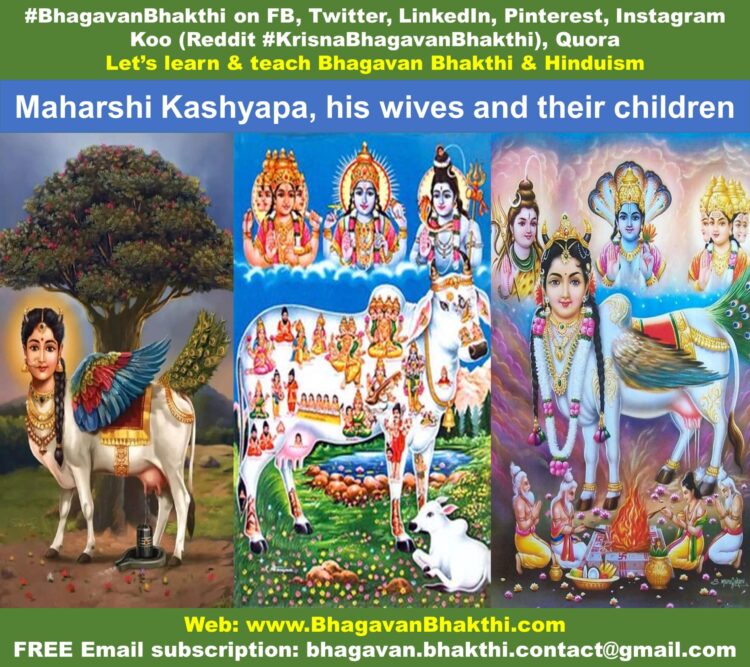 8. Vinata : She had two sons named Aruna and Garuda.

Garuda became the king of the birds and the mount of Lord Vishnu. 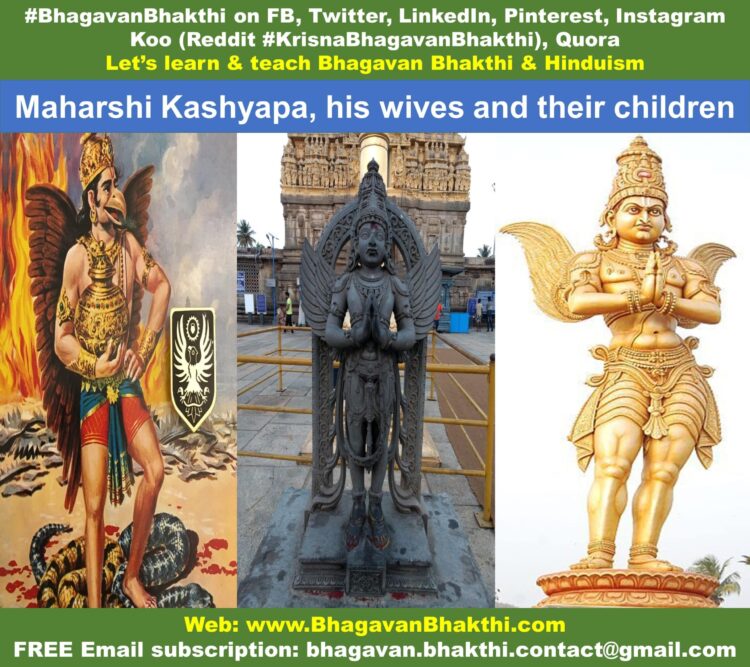 9. Tamara : She had six daughters. 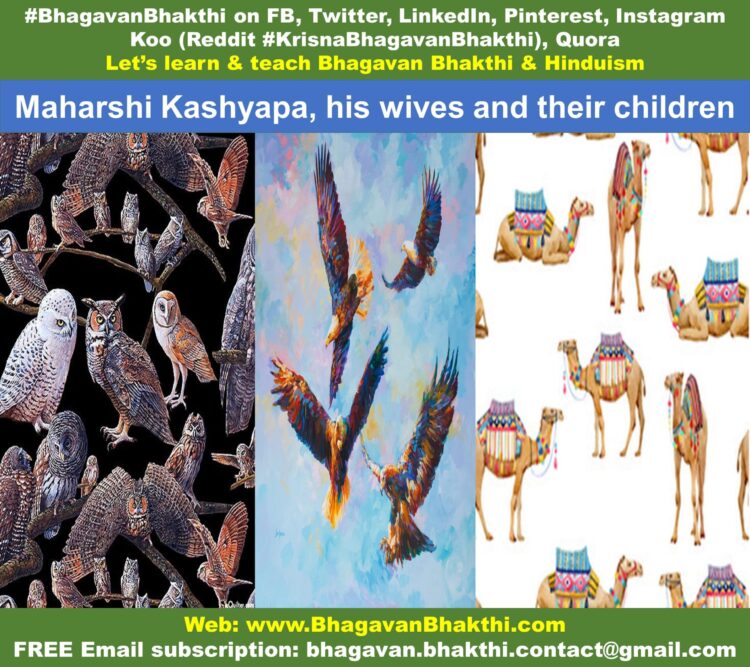 10. Krodhavasha : She had fourteen thousand children known as Asuras.

These Asuras or demons were also known as Krodhavashas. 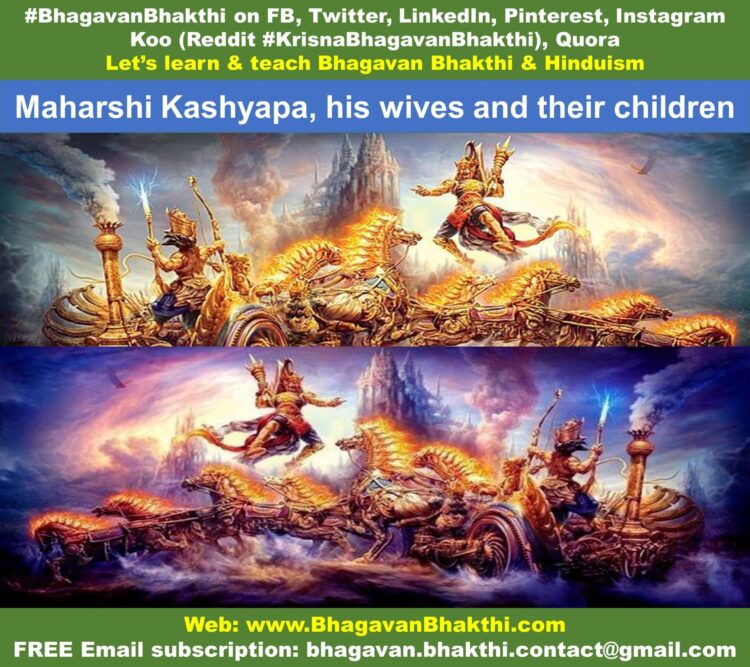 As she was very short-tempered, the children born to her had the following features:

11. Ila : She gave birth to trees, creepers, shrubs and bushes. 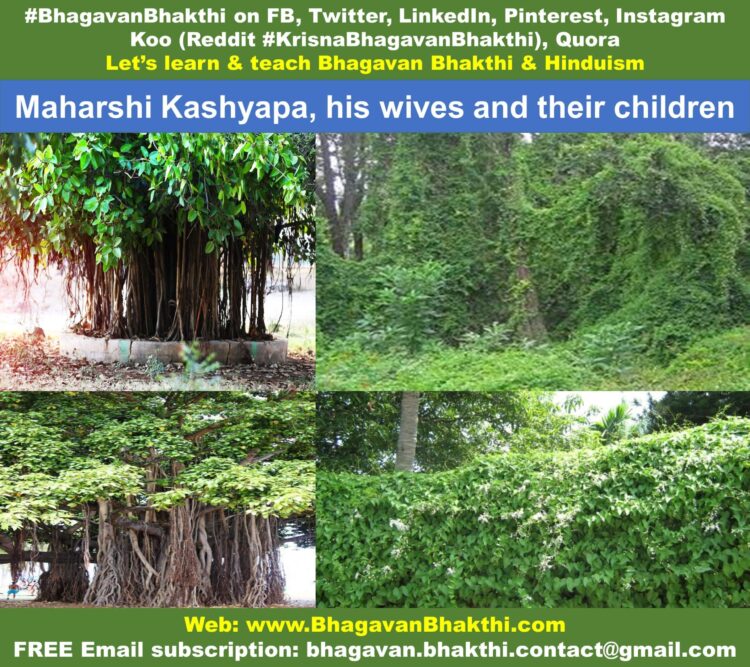 12. Kadru : Her sons were also known as Nagas or snakes.

Among the more important of Kadru’s sons were Ananta, Vasuki, Takshaka and Nahusha. 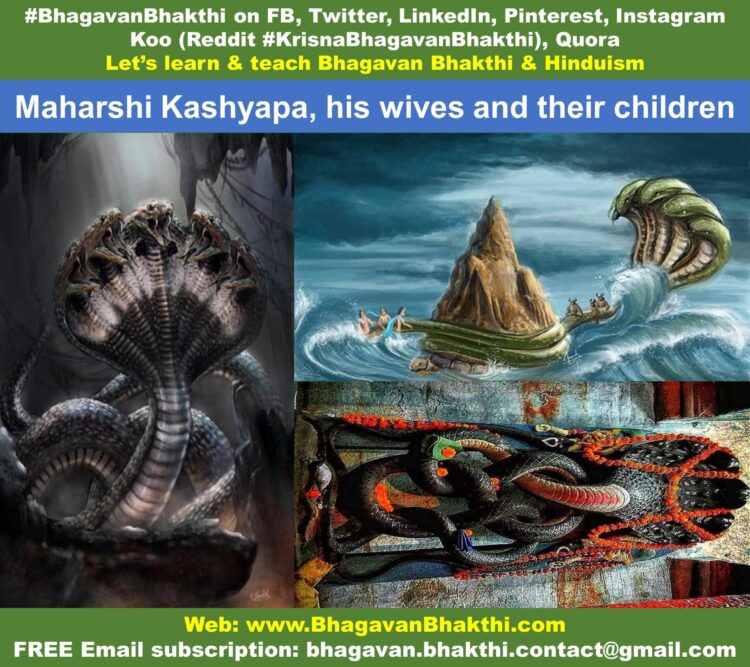 They were the divine dancers of Svarga Loka / heaven. 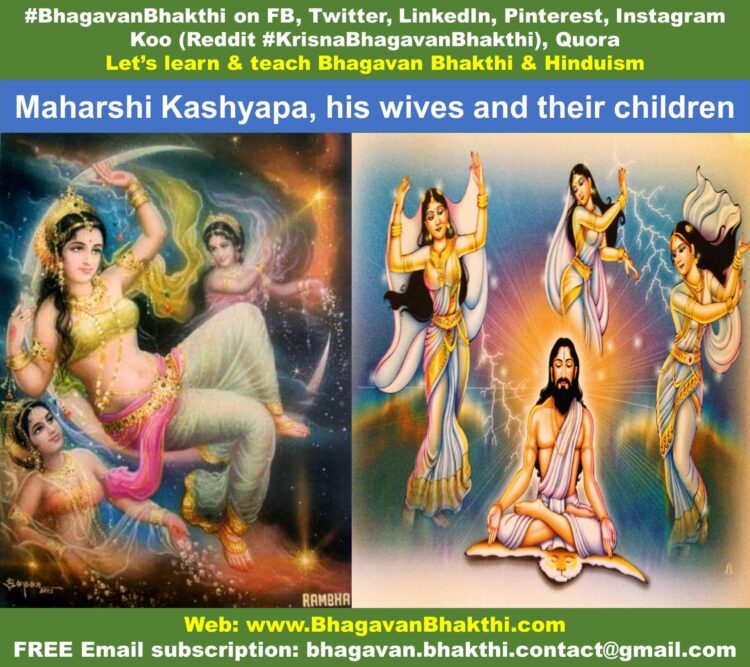 On one particular occasion, the gods succeeded in killing many of the demons.

Thirsting for revenge, Diti began to pray to her husband, Kashyapa that she might give birth to a son who would kill Indra, the king of the gods.

Kashyapa found it difficult to refuse his wife outright. All right, he said.

You will have to bear the son in your womb for a hundred years.

And throughout this period, you will have to observe various rites of cleanliness.

If you can successfully do this, your son will indeed kill Indra.

But if you do not observe these instructions, your desire will not be satisfied.

Diti resolved to do as her husband had bidden her.

But Indra had got to know about Diti’s resolve and was waiting for an opportuniy to save himself.

There was an occasion when, tired after her prayers. Diti went to sleep without first washing her feet.

This was an unclean act and it gave Indra the required opportunity.

He adopted a minuscule form and entered Diti’s womb.

With his weapon vajra, he sliced up the baby inside the womb into seven parts.

The baby naturally began to cry at the pain.

Indra kept on saying, ma ruda, that is, don’t cry. But the baby, or rather its seven parts, would not listen.

Indra thereupon sliced up each of the seven parts into seven more sections, so that there were forty-nine sections in all.

When these forty-nine sections in all.

When these forty-nine sections were born, they came to be known as the Maruts, from the words that Indra had addressed them.

Since Diti had not been able to adhere to the conditions her husband had set, the Maruts did not kill Indra.

They instead became Indra’s followers or companions, and were treated as gods.

To know about “Saptarishi details correct information“, you can click the below link: