The subject name “why Brahma married his daughter Saraswati” is highly secretive and hidden tattva (divine truth) is present. 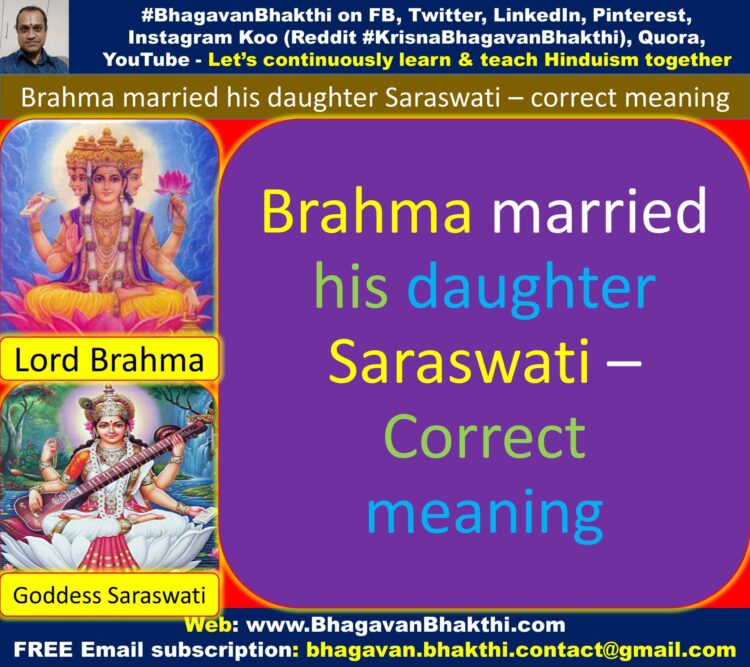 Not all people can understand this easily, as in Kali Yuga the main and first thing that comes into a liberal’s mind is copulation (sex).

Even though there are many people who think only of coition (sex).

But there are few people even in this Kali Yuga, who can understand the divine and correct message given in this incidence of “why Brahma married his daughter Saraswati“.

Let us know what is that divine and correct unknown incidence of “why Brahma married his daughter Saraswati?“:

Dear friends, I urge you to read the below post fully and with highest care.

So that you can understand the tattva (divine truth) correctly and fully.

Lord Brahma is born from the navel (nabhi) of Lord Vishnu and thus Lord Vishnu is known as Lord Padmanabha. 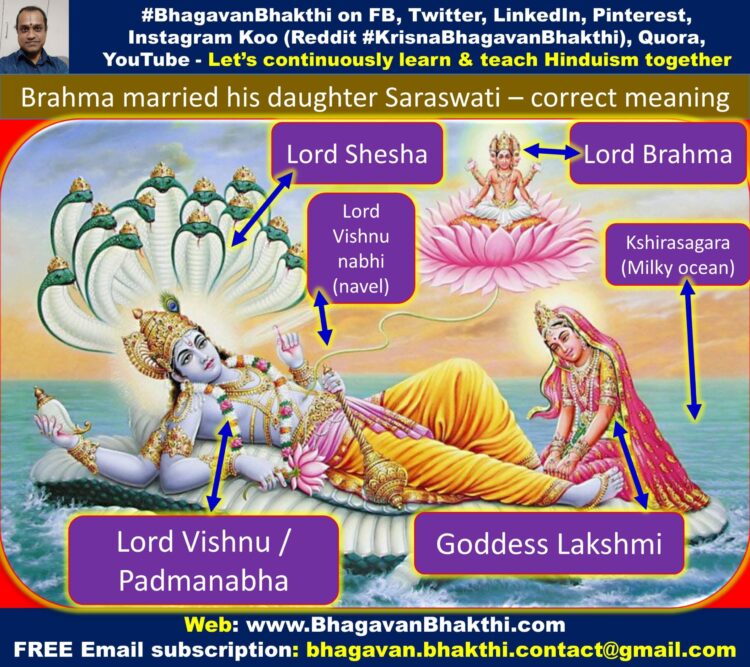 The first question which should arise in the divine people’s mind is that:

Lord Vishnu’s son (Lord Brahma) can never ever can make even a small mistake.

This is because, Lord Brahma is directly the son of Lord Vishnu.

Divine people should always think that, it is completely incorrect among the liberal’s people who think that Lord Brahma made a big blunder:

Because he married his own daughter Saraswati Devi.

I wish the readers to read carefully all these points to understand the tattva (divine truth / divine right meaning).

This is because, if we don’t understand the right meaning, then it’s of no use to be born as humans on this earth.

There won’t be any difference between us and the evil beast if we understand the tattva (divine truth) in the incorrect way.

This post is giving more and more details as per the Hindu Shastras (granthas / texts) and not at all as per own thinking. 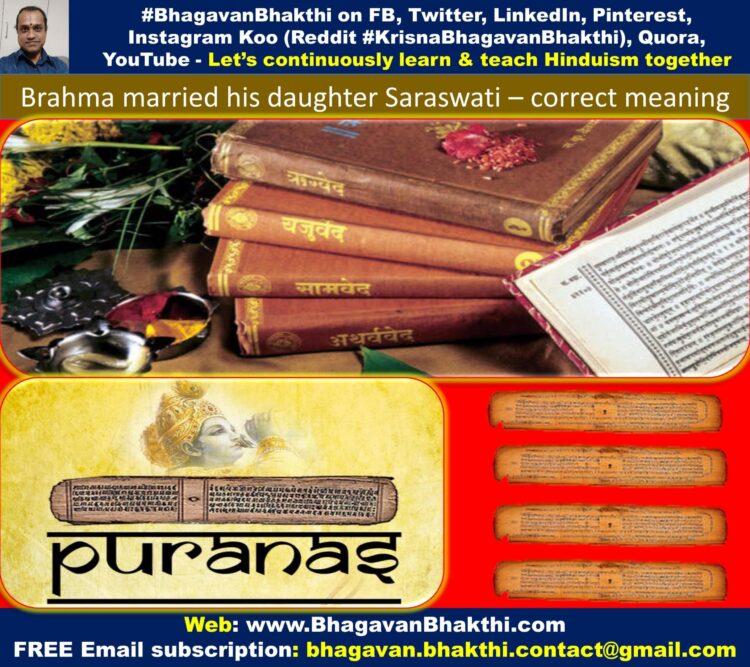 To understand, “why Brahma married his daughter Saraswati?“, we need to understand few very very important facts about Lord Brahma.

The list of the facts about Lord Brahma are as given below: 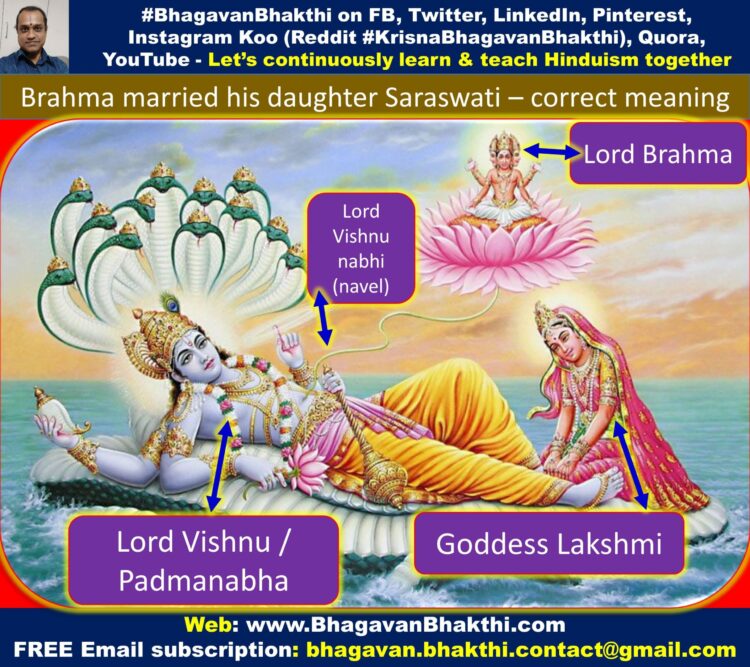 Lord Brahma is a Ruju : Lord Brahma belongs to a group of Devatas (Demigods) known as Rujus.

There are totally 100 Rujus and the present Lord Brahma is one among those 100 Rujus.

Another prominent Ruju is Lord Vayu.

We all know Lord Vayu takes the avatar as Hanuman in Treta Yuga and same Lord Vayu also takes avatar as Bhima in the Dwarapa Yuga.

The third avatar of Lord Vayu is of the Sri Madhwacharya Ji in the Kali Yuga. 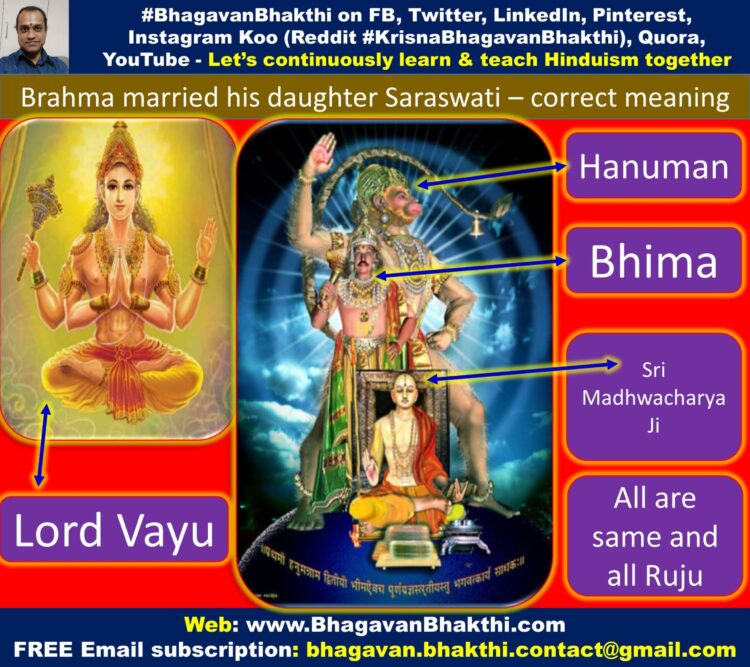 A Ruju (Lord Brahma) never makes a mistake : As per our Hindu Shastras (divine granthas / texts):

A Ruju will never ever make even a single mistake in his whole life. 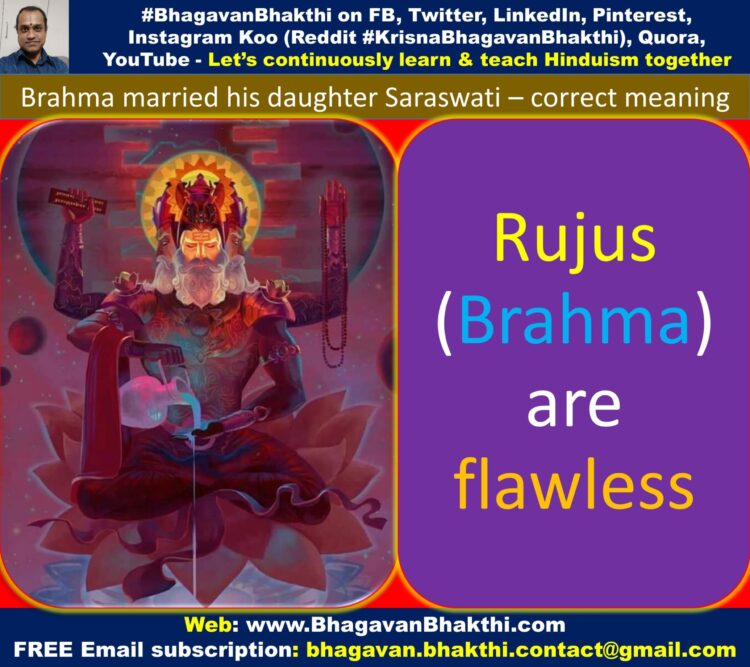 Ruju (Brahma) body is completely different than our material body : As said above –

Lord Brahma is born from the nabhi (navel) of Lord Vishnu and thus Ruju (Brahma) is completely divine body and not at all similar to material body like ours. 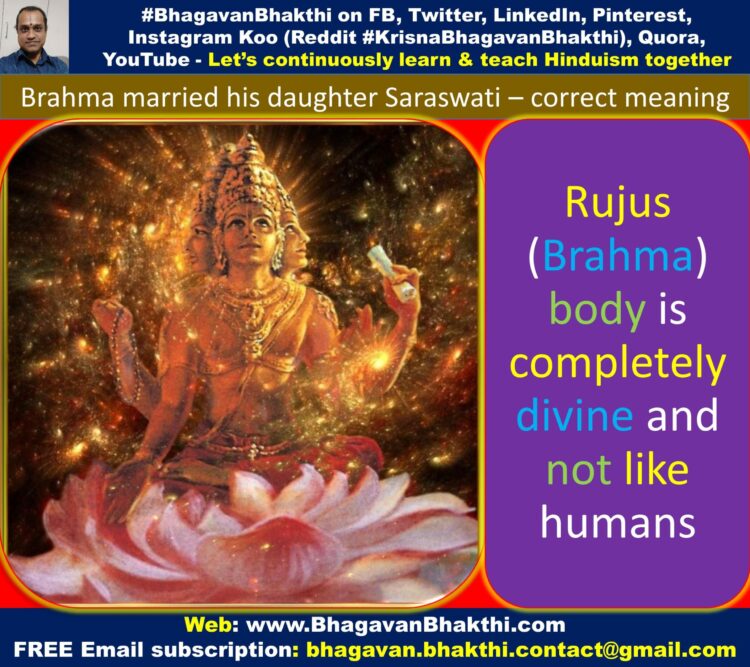 Ruju (Brahma) are most intelligent after Lord Vishnu and Goddess Lakshmi :

As per Hindu Shastras (granthas / divine texts), Rujus (Brahma) are the most intelligent, after Lord Vishnu and Goddess Lakshmi.

Only Lord Vishnu and Goddess Lakshmi are more intelligent than a Ruju (E.g., Lord Brahma). 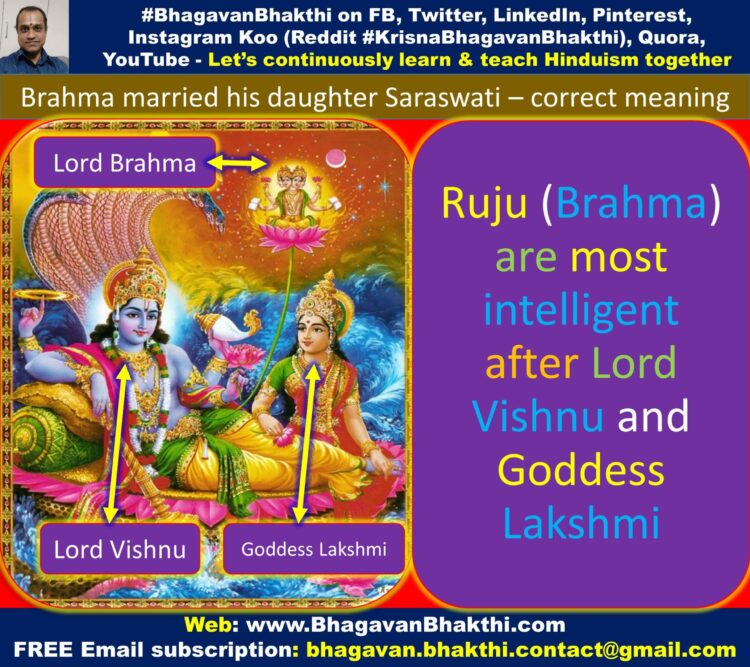 All Devatas (Demigods) are completely dependent on Brahma (Ruju) :

All the Devatas (Demigods) are completely dependent on Lord Brahma for all the material and spiritual functions of this universe.

(Other than Lord Vishnu and Goddess Sri Lakshmi Devi.) 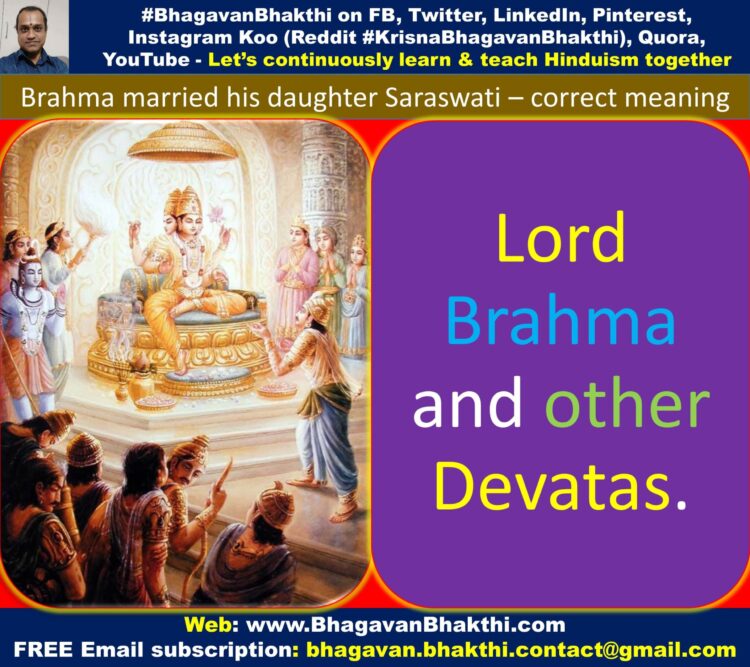 Brahma can give birth from any part of his body : Lord Brahma is not ordinary human like us.

He is not at all dependent on copulation to give birth to his children.

The great and divine Narada Maharishi (Devarishi) is a Brahma Manasa Putra (born from mind of Lord Brahma).

Daksha Prajapati was born from the thumb of Lord Brahma. 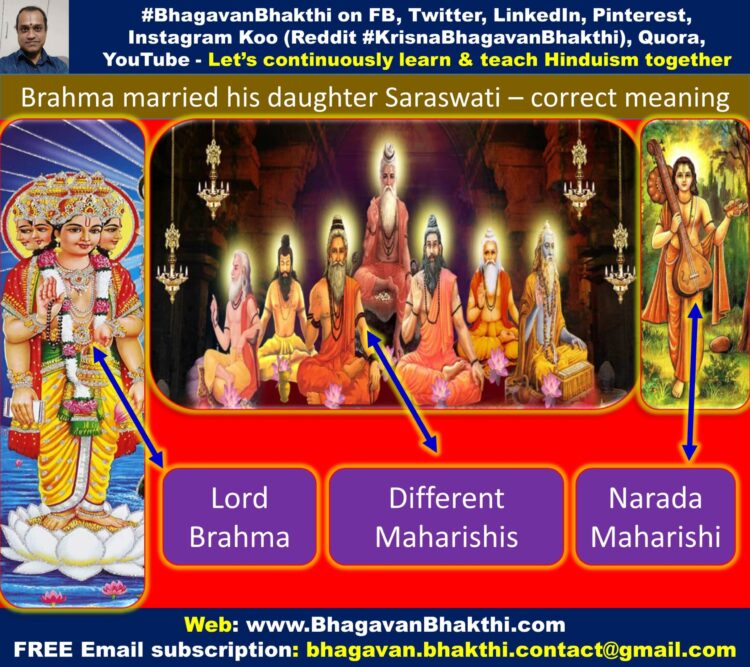 The great Bhrigu Maharishi was born from the touch of Lord Brahma.

Pulastya Maharishi was born from the ear of Lord Brahma.

Angira Maharishi was born from the mouth of Lord Brahma.

Atri Maharishi (father of Lord Dattatreya – An avatar of Lord Vishnu) was born from the eye of Lord Brahma.

Pulaha Maharishi was born from the navel of Lord Brahma.

For more information about “List of Brahma Manasputras names and their children names“, visit the below link:

List of Brahma Manasputras names and their children names 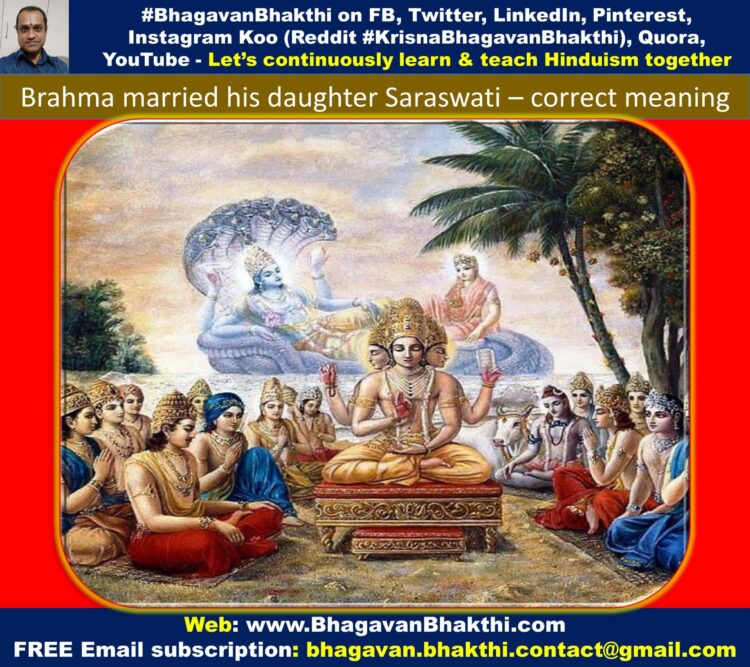 Only after this superhuman task (e.g., herculean task), Lord Brahma gets the padavi (sinecure) to be Lord Brahma.

[Lord Brahma is not a name, but in fact it is a padavi (sinecure).]

[After every 100 Kalpas, a new Lord Brahma gets this position of Lord Brahma.]

To get more information about “List of Hindu measurement (units) of time unknown facts“, please click the below link: 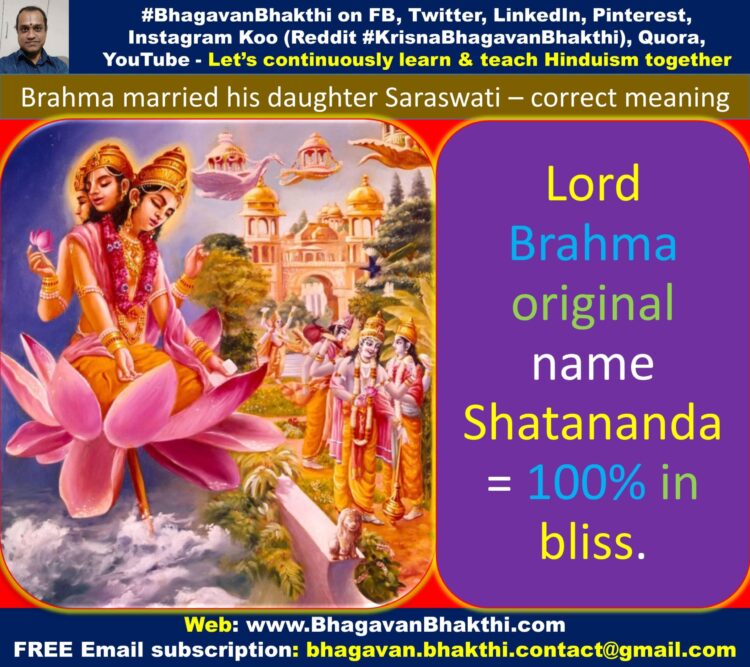 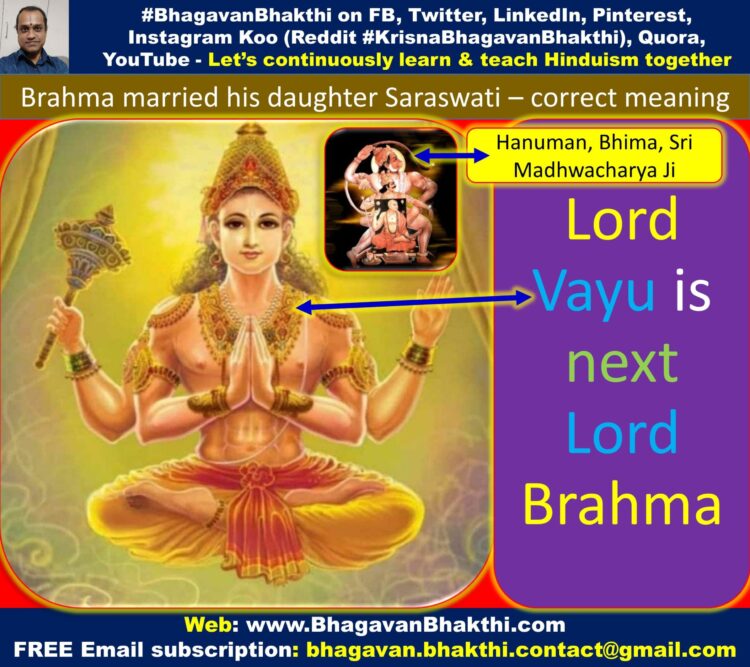 Hanuman (an avatar of Lord Vayu), after the great war of Lanka, Lord Rama blesses Hanuman to be next Lord Brahma.

Bhima (an avatar of Lord Vayu), after he kills the mighty Jarasandha, Lord Krishna blesses Bhima to be next Lord Brahma.

Sri Madhwacharya Ji (an avatar of Lord Vayu), after he completes the commentary on Brahmasutra –

(We should always remember that, Hanuman, Bhima and Sri Madhwacharya Ji are the avatars of Lord Vayu and there is no difference between these three.)

To know more information about “Who is next Lord Brahma“, please click this below link:

Who is next Lord Brahma

Now, after knowing all the above great and divine facts about Lord Brahma, you please think about “why Brahma married his daughter Saraswati?“. 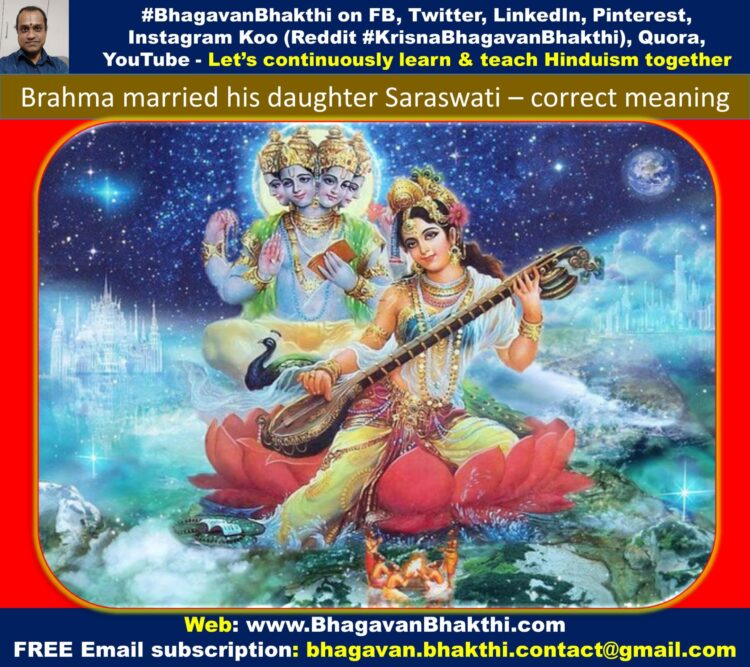 After knowing the above points, can you think that Lord Brahma do even a small mistake?

Will Lord Vishnu provide the padavi (sinecure) of Lord Brahma to the present Brahma? (Shatananda – see above for this word meaning)

Now, let us come to our main question, “why Brahma married his daughter Saraswati?“:

Answer is here : Yes, Lord Brahma married his own daughter. This is absolutely true.

But, why did Lord Brahma married his own daughter. Let us find the answer as given below…

Let us check the below reference from Mahabharata, Khilabhaga, Harivamsha Purana, Canto 1, Chapter 2: 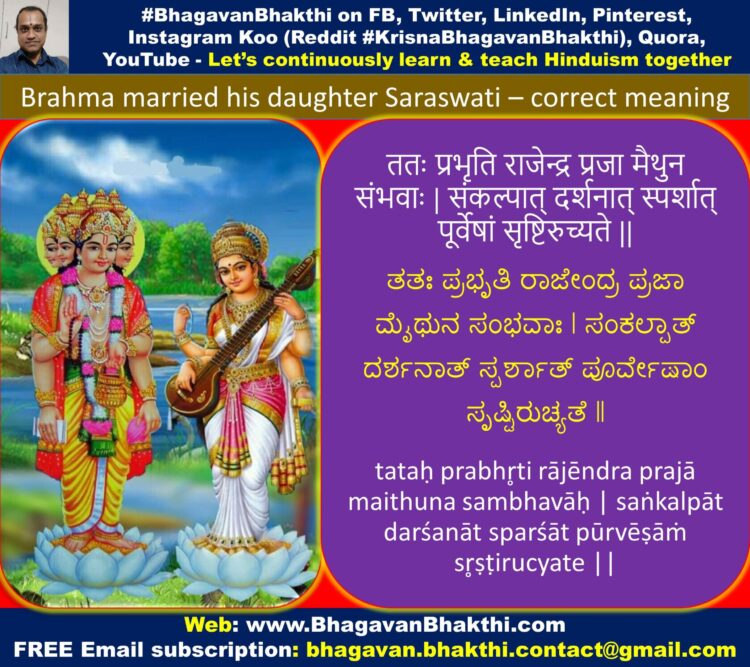 Meaning of the above shloka : Then the great King Daksha engaged in physical contact to grow his clan.

But before this initiative, all the living beings of this material world were created only by intuition, perception and touch.

The above shloka from Mahabharata, Khilabhaga, Harivamsha (Harivamsa / Harivansa) Purana clearly says that –

Before Daksha there was no material physical contact between male and female.

That is, there was no material sexual attraction between a male and a female.

there was no one who had the capability to marry Goddess Sri Saraswati Devi.

For this reason, Lord Vishnu wished that Goddess Sri Saraswati Devi to be the wife of Lord Brahma. 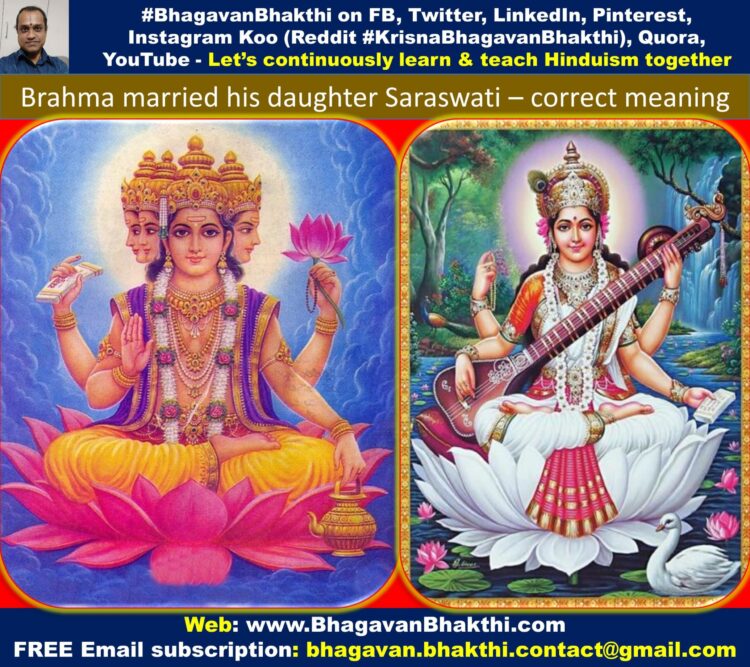 Now, again you may have the question, how can Lord Brahma marry his own daughter Goddess Sri Saraswati Devi?

1. As said above, first reason was Lord Vishnu wished Goddess Sri Saraswati Devi to be wife of Lord Brahma.

2. There was no one else who had the capability to marry Goddess Sri Saraswati Devi and thus Lord Brahma married her.

3. There should be someone the grand first who will give birth to all. This grand first (after Lord Vishnu and Goddess Lakshmi) was Lord Brahma, the creator.

Everything has to be created by someone right??? That someone is Lord Brahma, the creator.

If he doesn’t creates, then there won’t be anything like living or non-living beings or things on this earth and the universe.

From this it is very much clear that, we all are born from Lord Brahma himself. 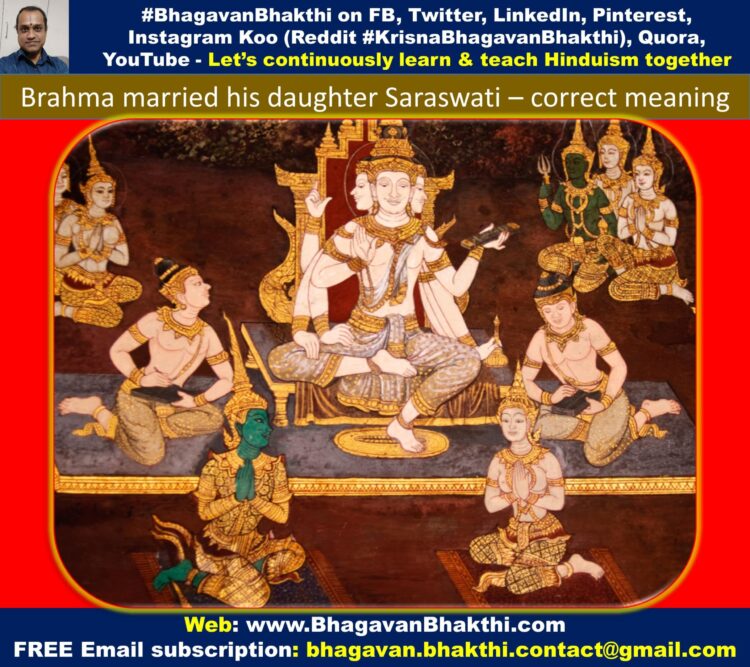 then all the humans have married their own brothers and sisters right???

Your mother has married to her own brother,

your father has married to his own sister,

you have married to your own sister,

your wife has married to her own brother.

If you have this mindset without knowing the tattva (divine truth), then all the humans on the earth are brothers and sister, right???

Our Hindu Shastras (granthas / texts) very clears says that Lord Brahma has no material ambitions including any sexual attraction.

and there was no other capable person who can marry Goddess Sri Saraswati Devi.

Neither because of sexual attraction nor for any other material seducing things.

Liberals will give their own explanations as per their own mindset.

But we should always remember that, we should learn Hinduism (Sanatana Dharma) under the guidance of a correct Guru. 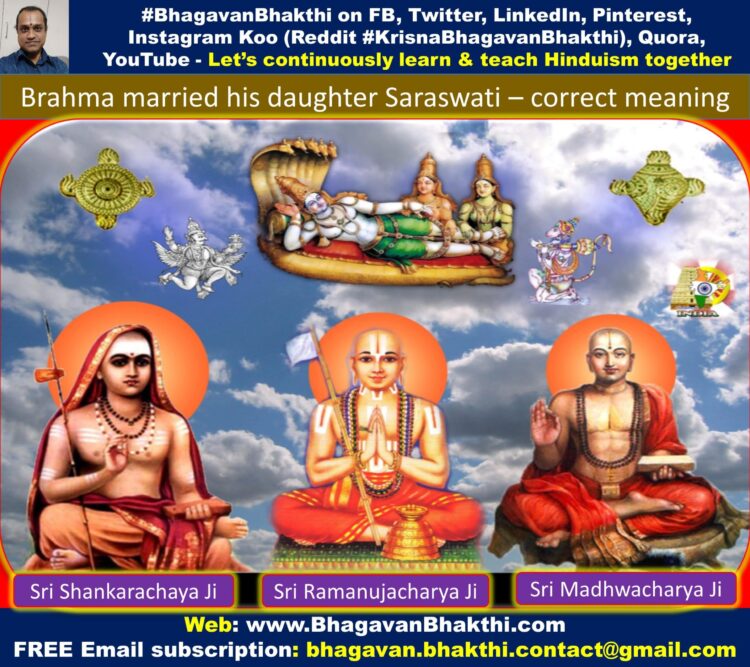 If we learn Hinduism (Sanatana Dharma) under the person who always thinks of sex, material enjoyment, etc., then we will fall into huge ditch.

This is of sure.

To know about “Hinduism unknown facts“, please visit the below link: