Bhagavan Lord Sri Rama blessings to you and your family! 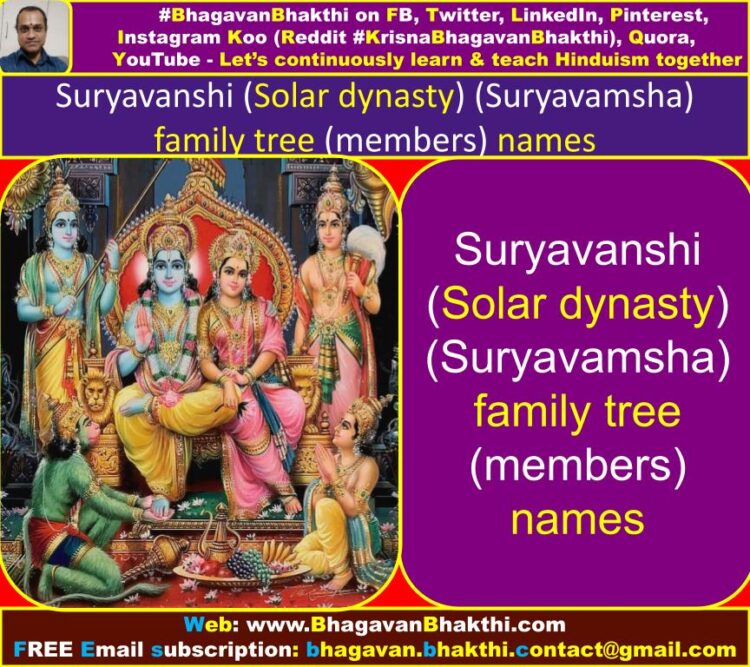 In India, the Suryavansh (Suryavamsha) or Solar dynasty was founded by the great King Ikshvaku.

Few of the great people belonging to this great Suryavamsha (Suryavanshi) (Suryavansh) (Solar dynasty) are:

We all Indians should be highly proud of being born in this greatest country Bharata (India).

We have born in this greatest country as we may have done some ‘punya karma‘ (good deeds) in our earlier lives. 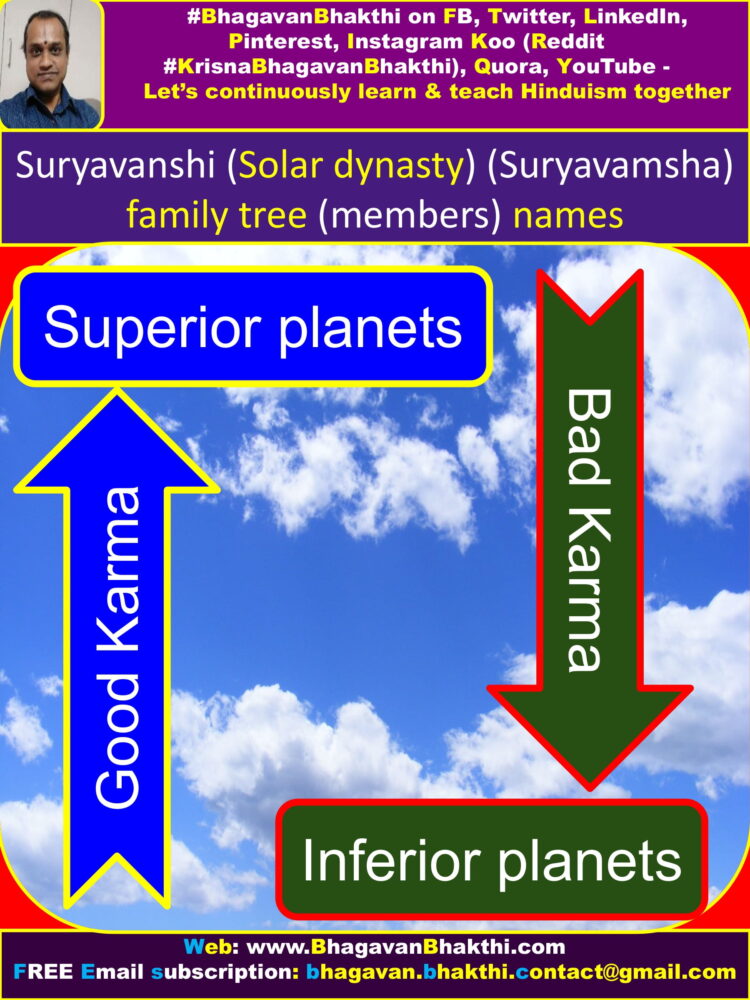 Note : Kindly note that, the below information is taken from Srimad Valmiki Ramayana and Srimad Bhagavatam.

The names may vary as per few other Puranas, this is because one person is known by multiple names.

All the below mentioned Kings and Queens lived thousands of years. For e.g., Dasharatha lived almost 9k+ years.

Lord Rama was present physically for more than 11k years on this earth.

King Muchukunda lived even during the Dvapara Yuga, that is, he lived for lakhs of years.

This is the amazing part of this great clan of Suryavansh (Suryavanshi) (Suryavamsha) (Solar Dynasty).

Now let us move on to know the “What is the Suryavamsha (Suryavansh) (Suryavanshi) (Solar dynasty) family tree“.

List of Suryavanshi Kings (Suryavansh) (Suryavamsha) (Solar Dynasty) family tree (members) names are as given below:

Lord Sri Narayana (Vishnu) : Lord Sri Vishnu is the Supreme Lord of all the infinite Universes. 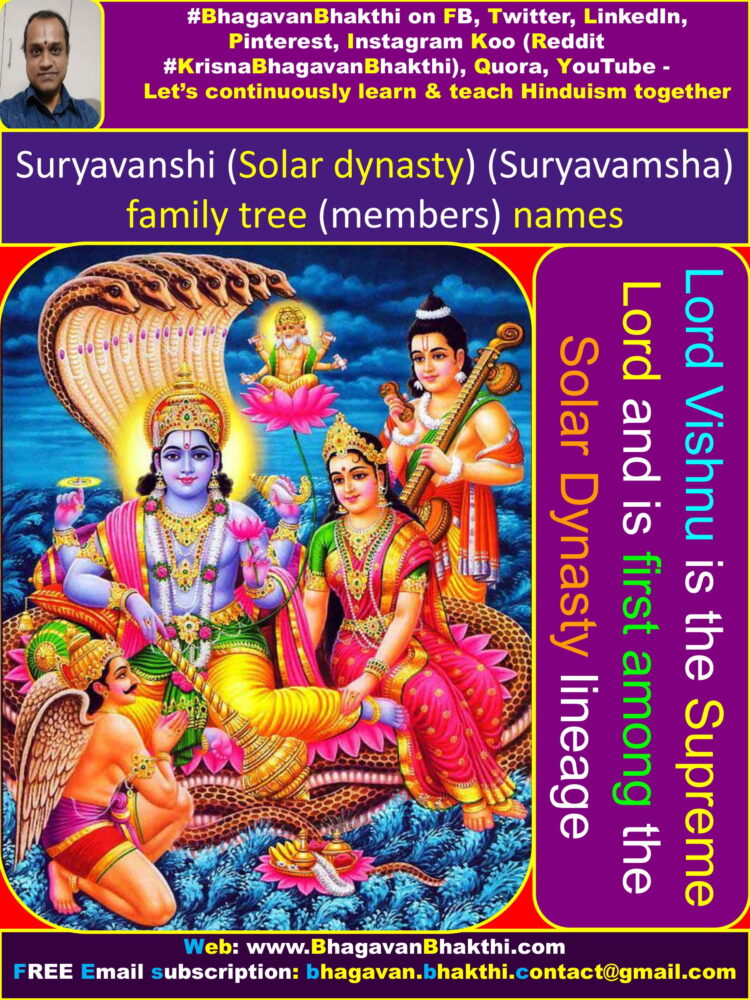 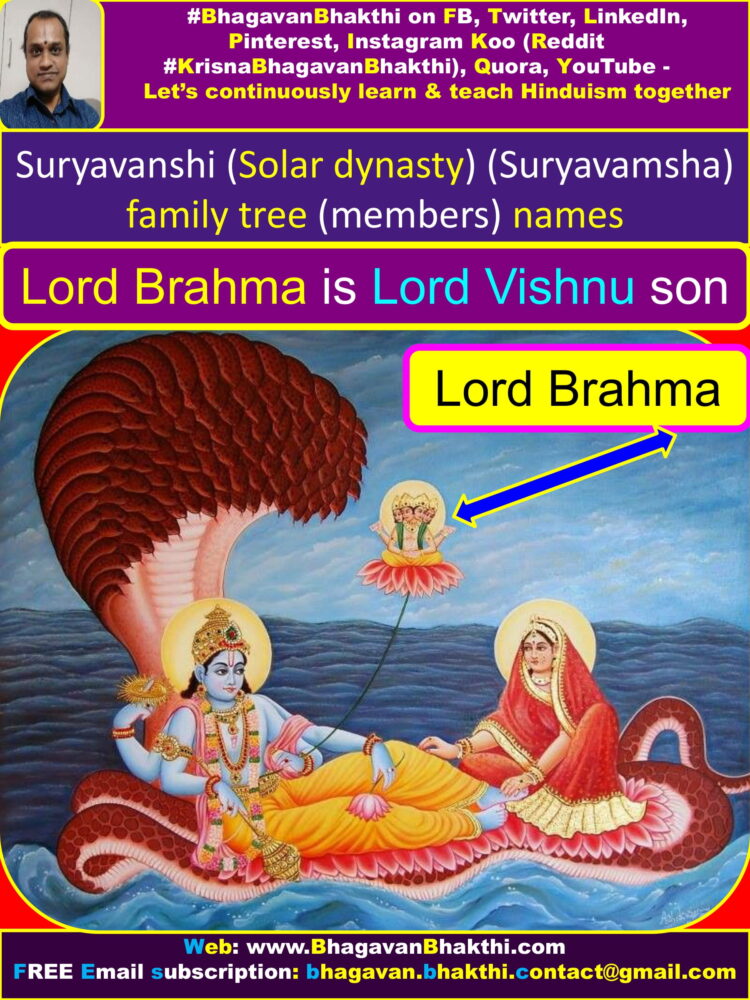 Marichi and Kala had a son named Maharishi Kashyapa. 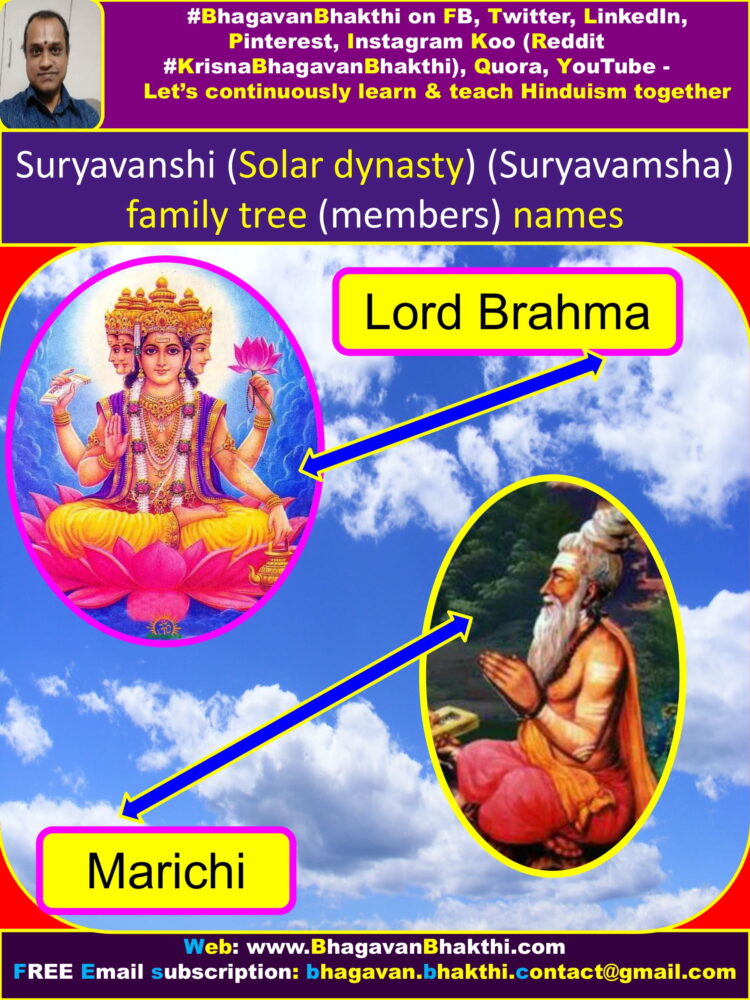 Maharishi Kashyapa had 13 consorts (wives) and their names are as given below: 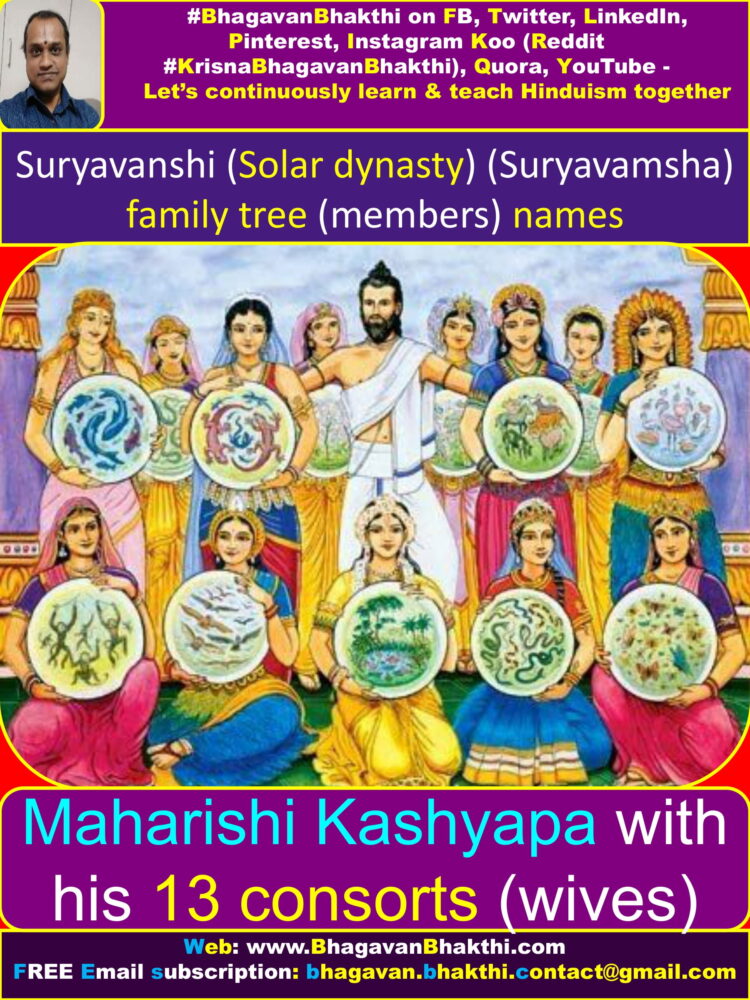 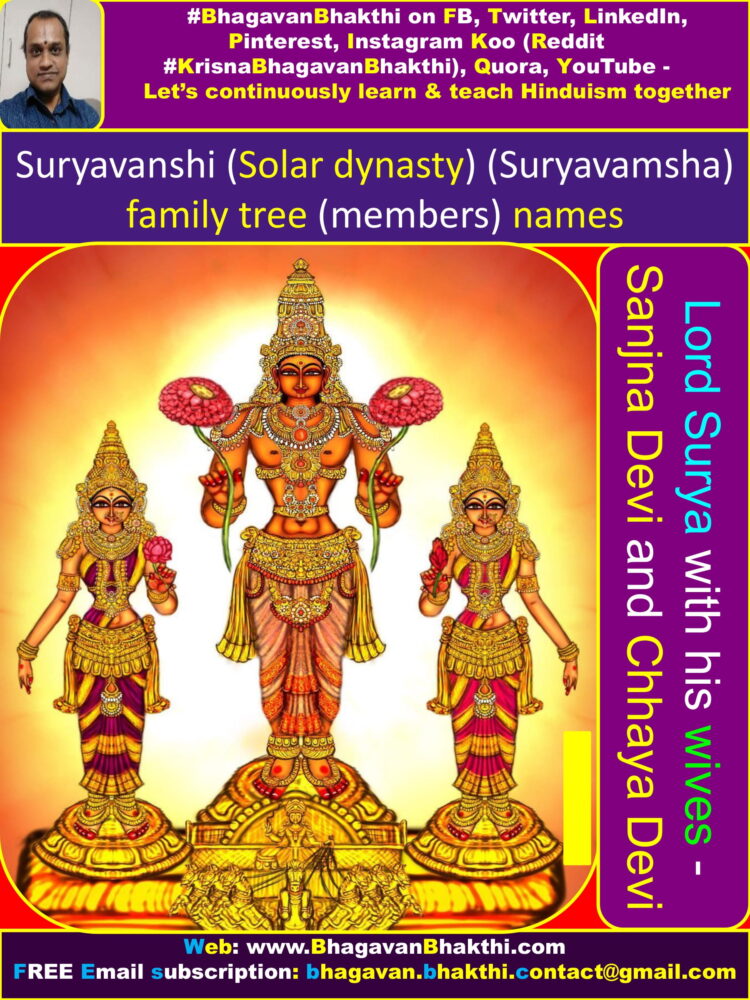 He is the same King Manu Maharaja who appears during the Lord Matsya avatar (Lord Vishnu avatar). 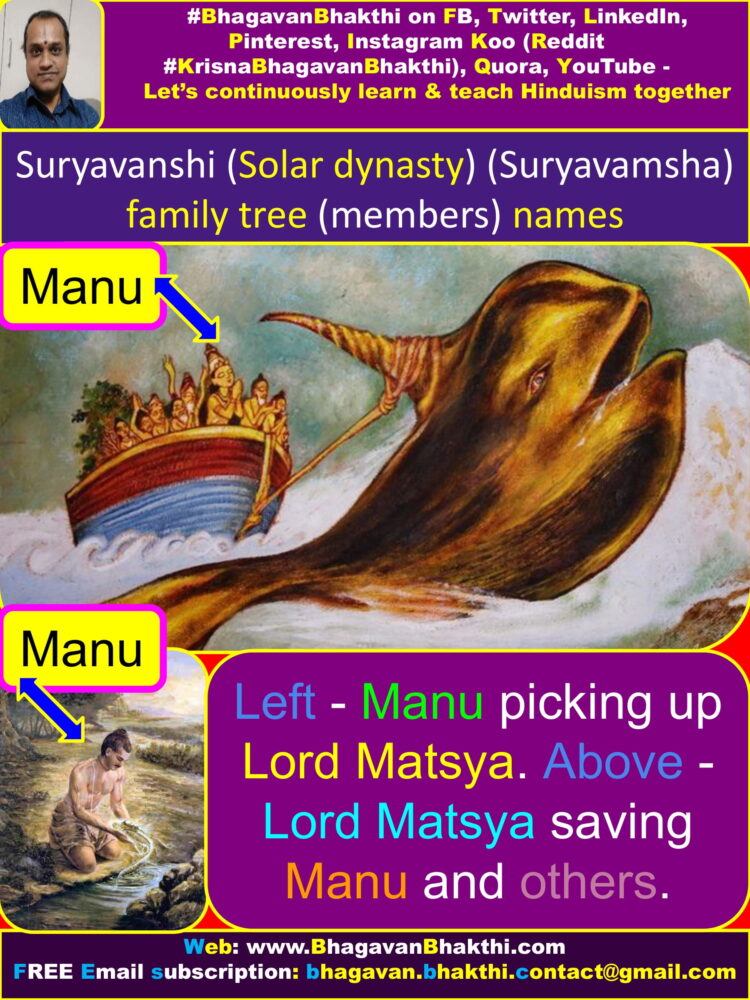 Ikshvaku : Ikshvaku was the son of Manu (Vaivasvata Manu) and Shraddha Devi.

Since Ikshvaku was great and divine in this lineage, Lord Rama’s lineage is known as Ikshvaku Vansh (Vamsha). 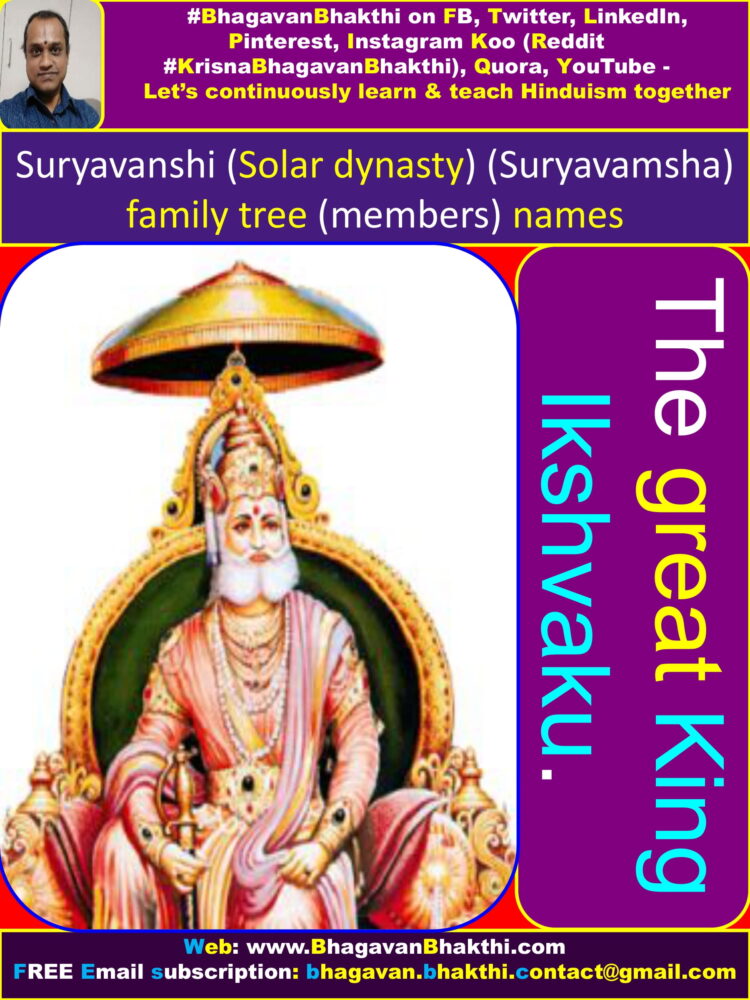 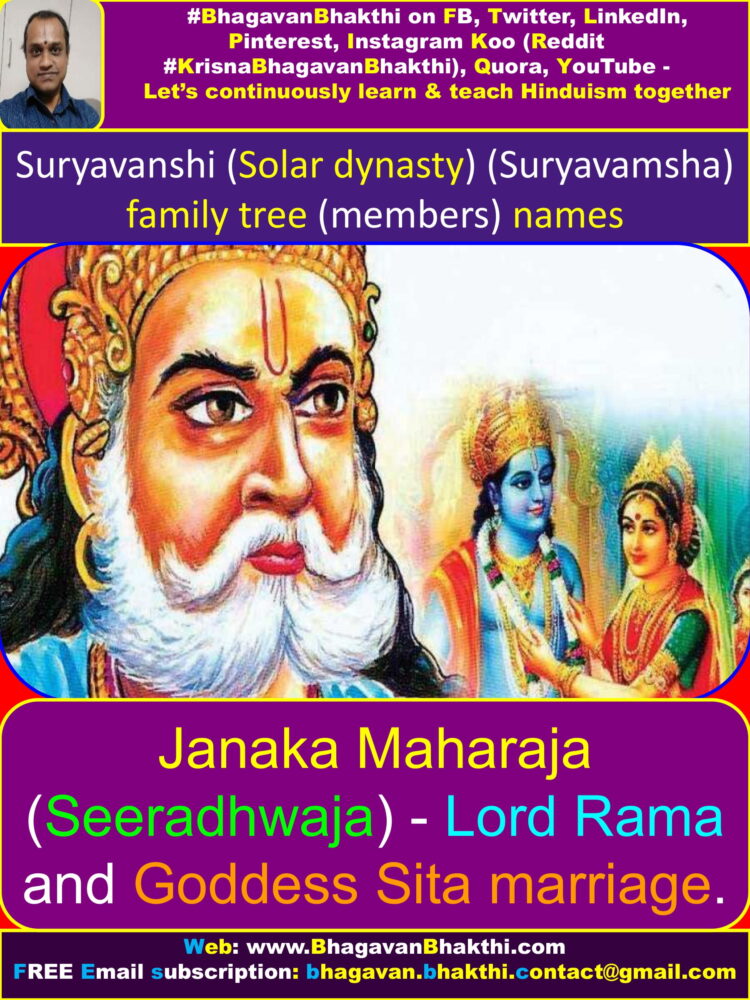 Kukshi : Kukshi was the son of Ikshvaku.

This King Prithu is different from the other King Prithu from whom mother earth got the name Prithvi.

Mother earth got the name Prithvi from a King Prithu who belonged to Chandravansh (Chandravamsha) (Lunar Dynasty). 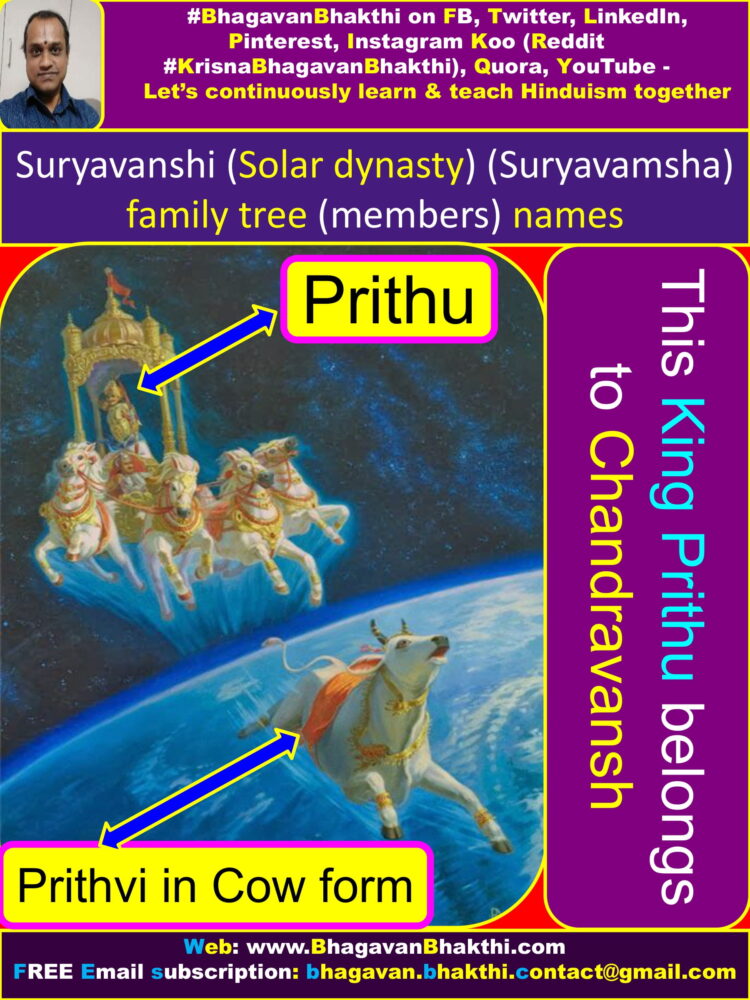 Yuvanashva I : Yavanashva I is the son of Ardra or Chandra.

This great King Muchukunda is the same who comes in the Mahabharata also.

Through Muchukunda (Using the fire from his eyes), Lord Krishna kills a demon King called Kalayavana. 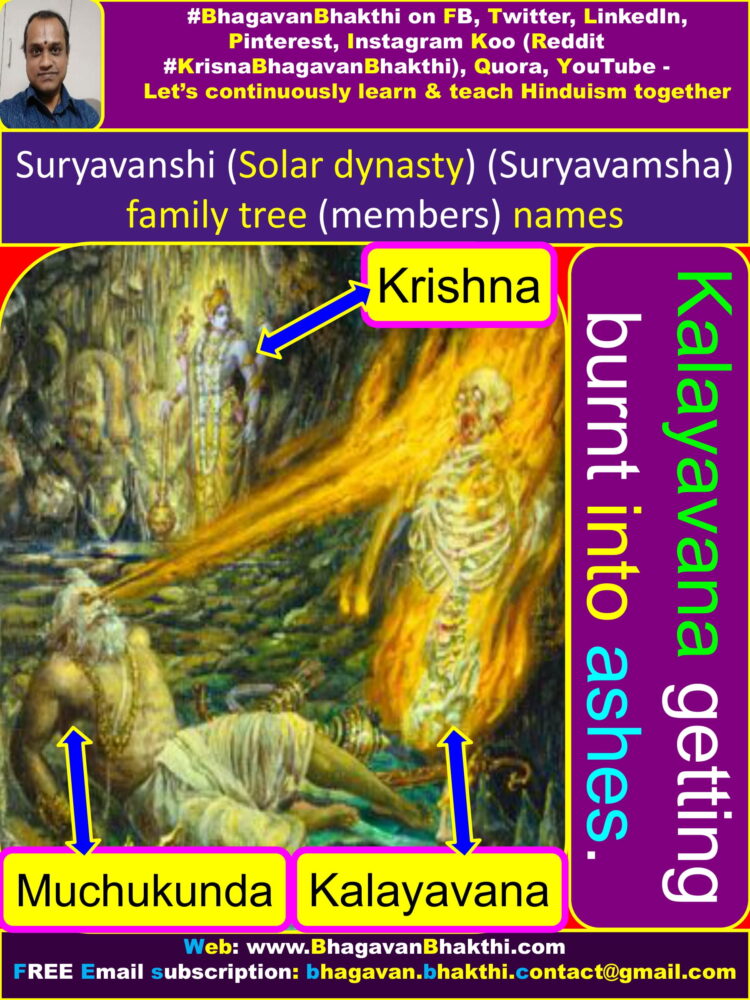 King Ambarisha was a great and divine devotee of Lord Vishnu.

King Ambarisha was so divine and devoted to Lord Vishnu, even the avatar of Lord Shiva, that is

Rishi Durvasa (Lord Shiva avatar) was not able to do anything to this devoted King Ambarisha. 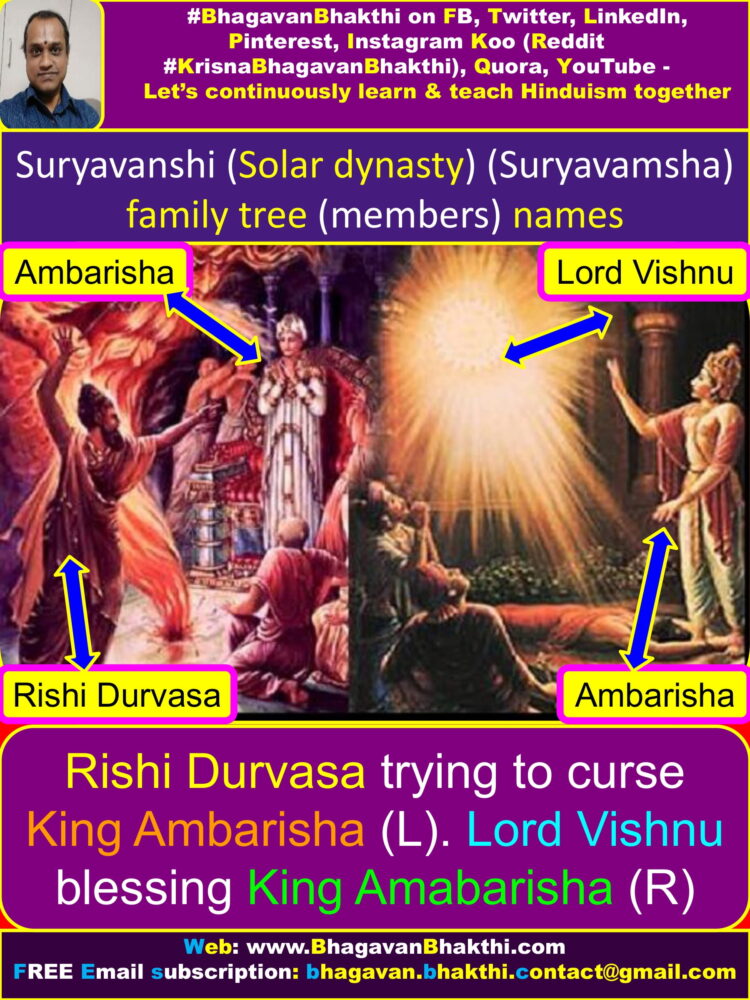 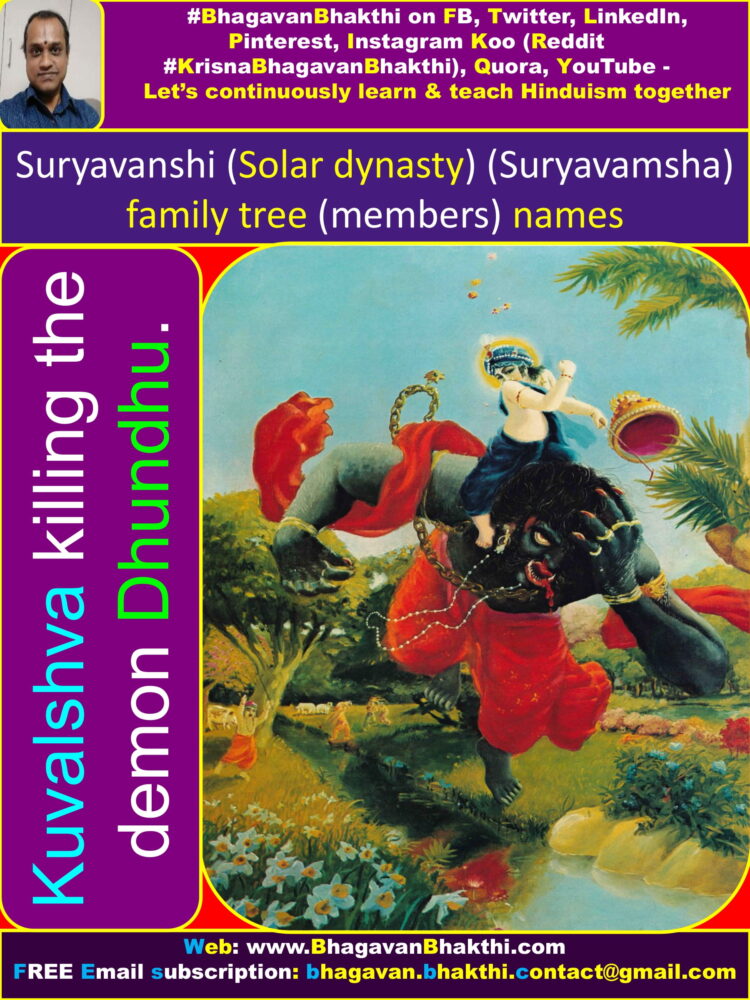 Pramoda : Pramoda is the son of Dridhashva.

This Trishanku had an ambition of going to Svarga Loka in his material body itself. 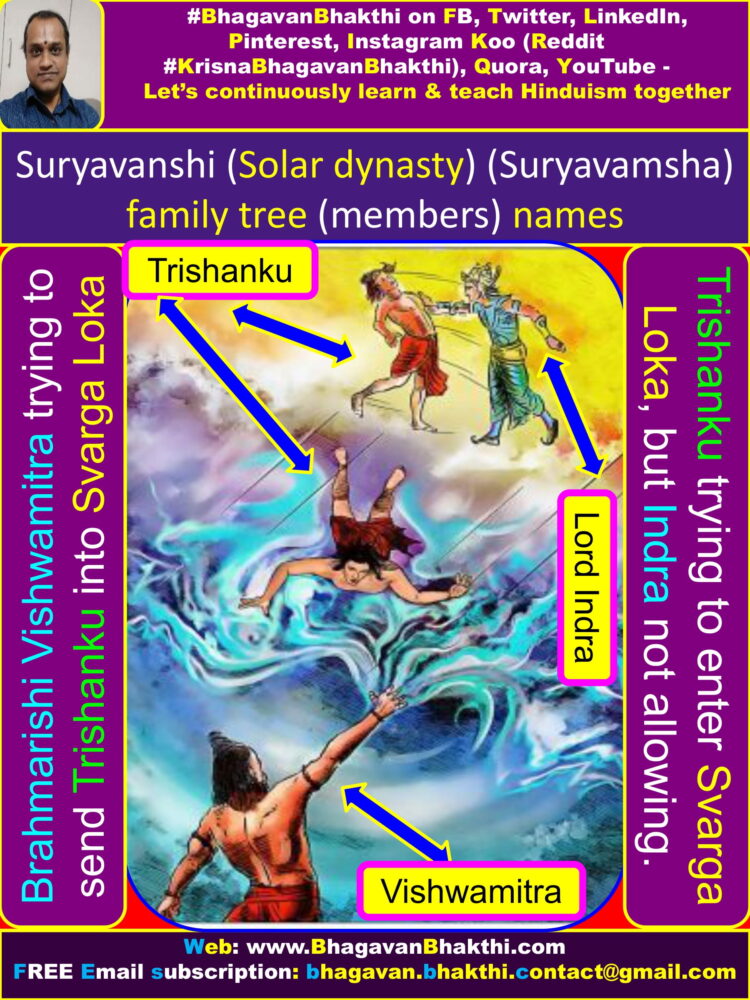 Some how Trishanku persuaded the great Brahmarishi Vishwamitra and even tried to go Svarga Loka in his material body.

Trishanku = Tri + Shanku = Three + Sins. He is the person who had made three ghastly sins.

Satya Harishchandra was one among the legendary Kings of the Solar dynasty (Suryavanshi) (Suryavamsha).

Satya Harishchandra had donated whole of his Kingdom to Brahmarishi Vishwamitra. 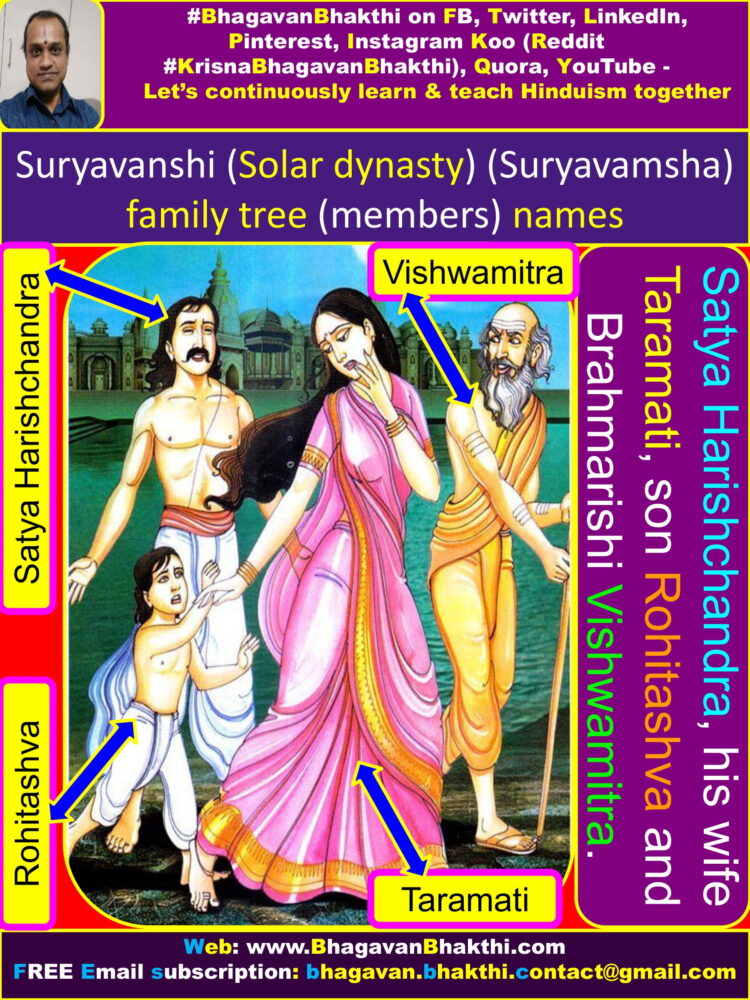 Sudeva : Sudeva is the son of Champa (Chenchu).

Vijaya : Vijaya is the son of Sudeva.

Sagara : This great King Sagara (Pronounce as – सगर / ಸಗರ / sagara) was the son of Bahuka.

Meaning of Sagara = Sa + Gara = With + Poison. Sagara is the person who was born with poison.

This poison was given to Sagara’s mother when she was pregnant by other wife of Bahuka.

Since Sagara was born with the poison during his birth, he was given this name Sagara. 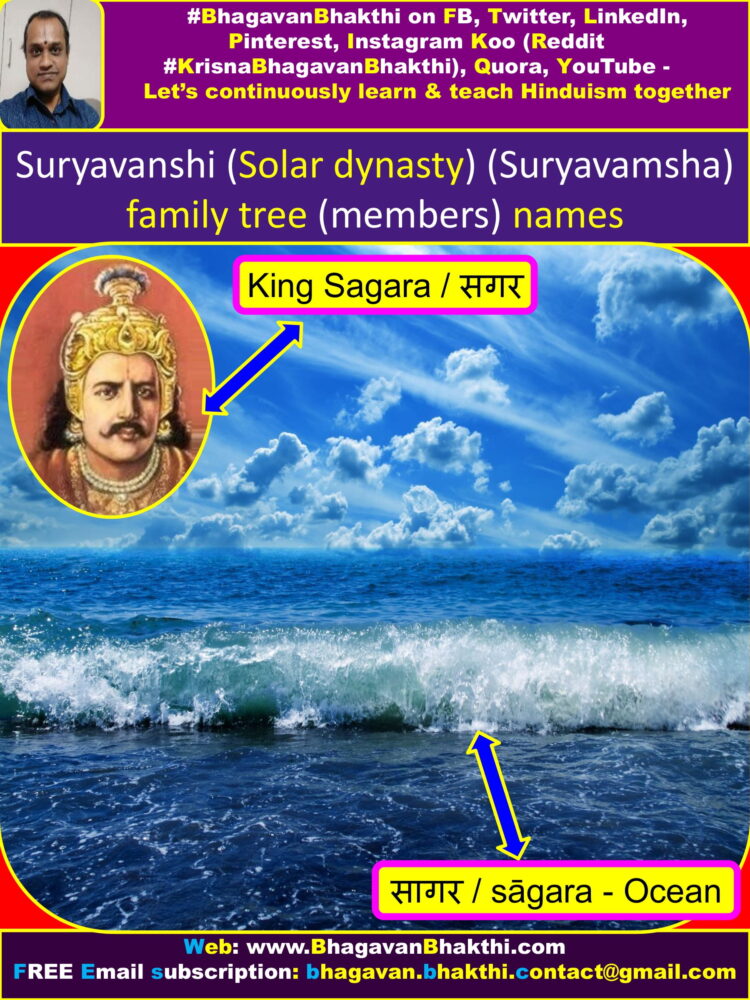 Bhagiratha : Bhagiratha is the son of King Dileepa I.

This great King Bhagiratha is the one who brought down the Ganga river of Svarga Loka on earth. 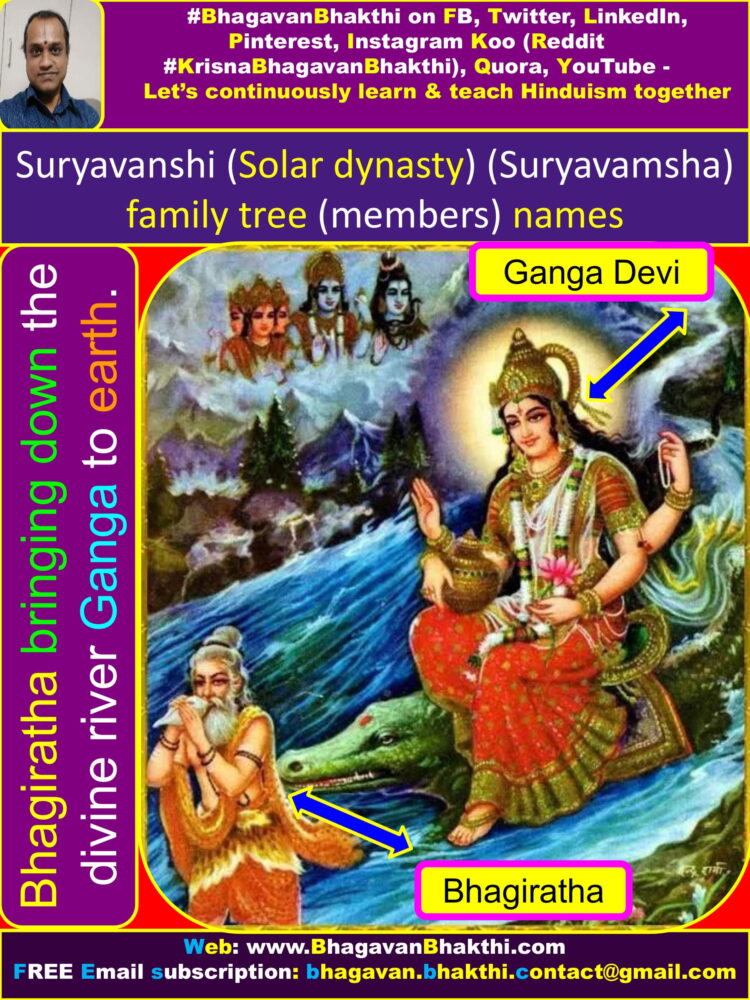 Raghu : King Raghu is the son of Dileepa II and Sudakshina (mother). 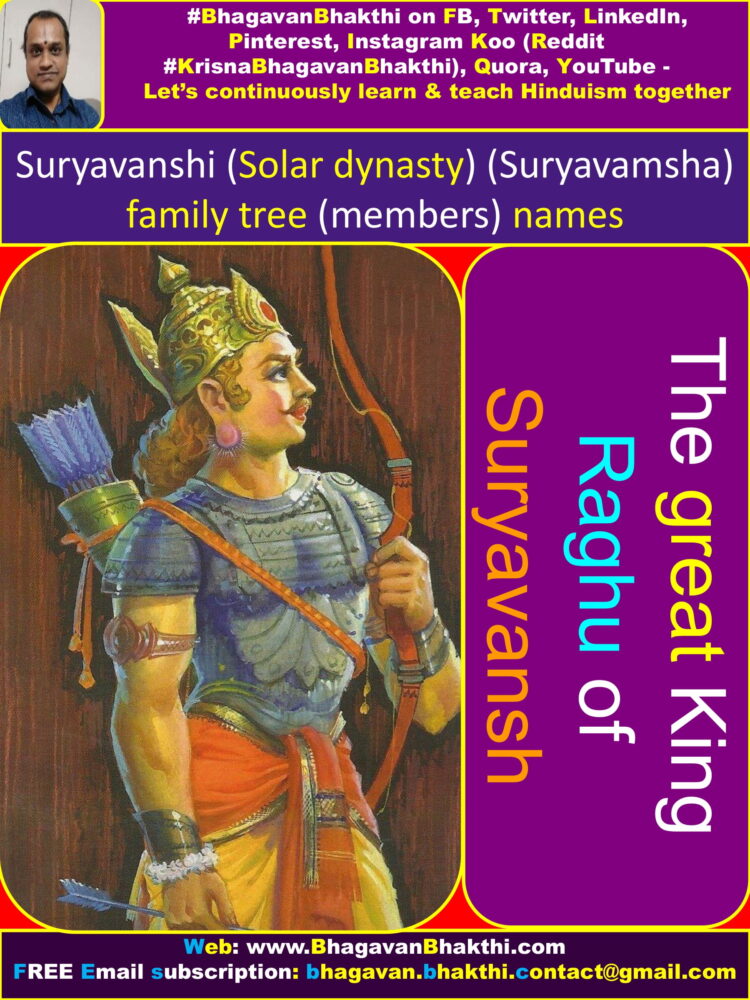 Because of him Lord Rama is called as ‘Raghavendra‘ (Indra among the Raghu family),

Aja : Aja is the son of the great King Raghu and Aja is also the father of the another great King Dasharath. 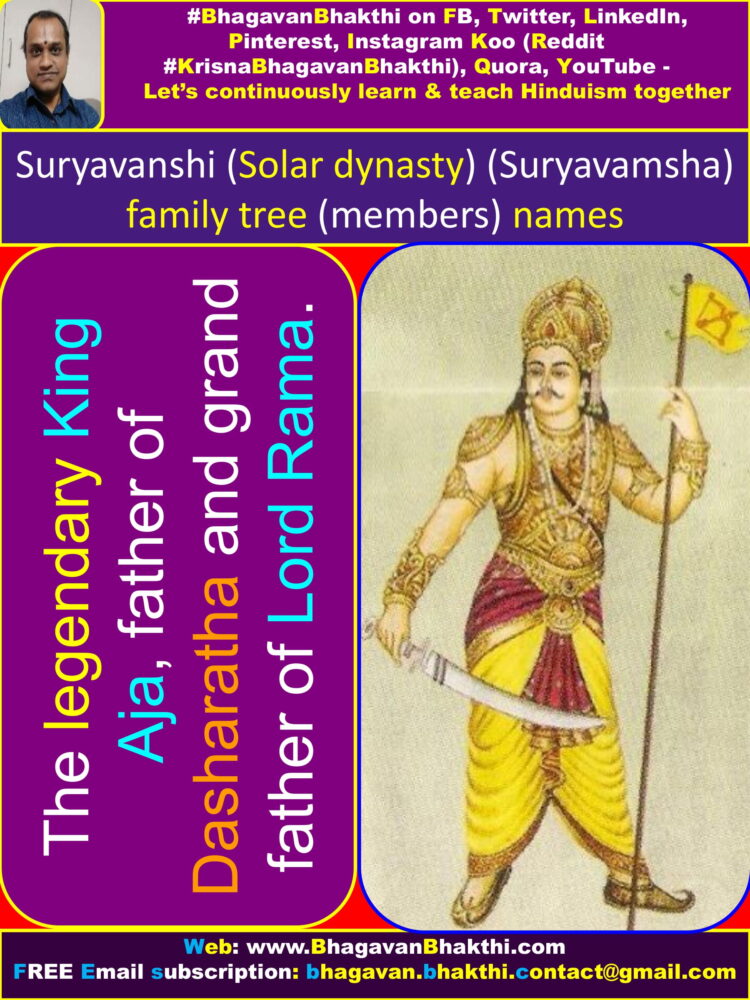 Dasharatha : Dasharatha is the son of the King Aja.

Dasharatha sons names are: Lord Rama, Lakshmana, Bharata (In Hindi it is pronounced as Bharat) and Shatrughna.

Dasharatha only daughter name is Shanta.

Dasharatha had 3 main wives and their names are: Kausalya, Kaikeyi and Sumitra. 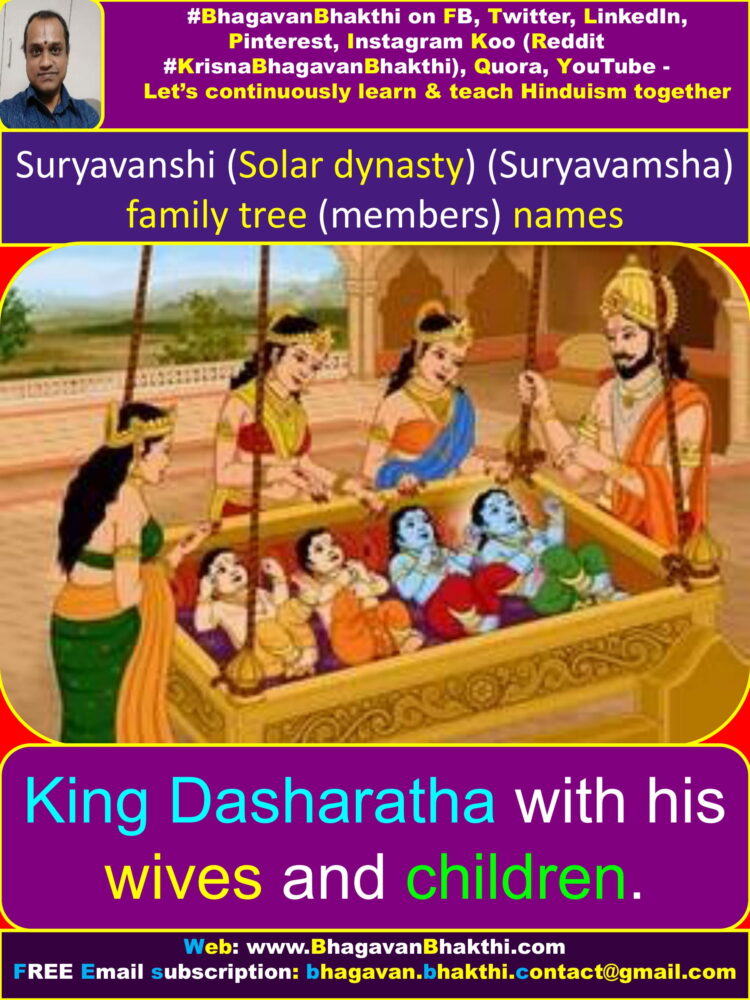 Rama : Lord Rama is an avatar of Lord Vishnu himself.

Lord Rama was present physically on this earth for more than 11k years, and those years were known as ‘Rama Rajyam‘. 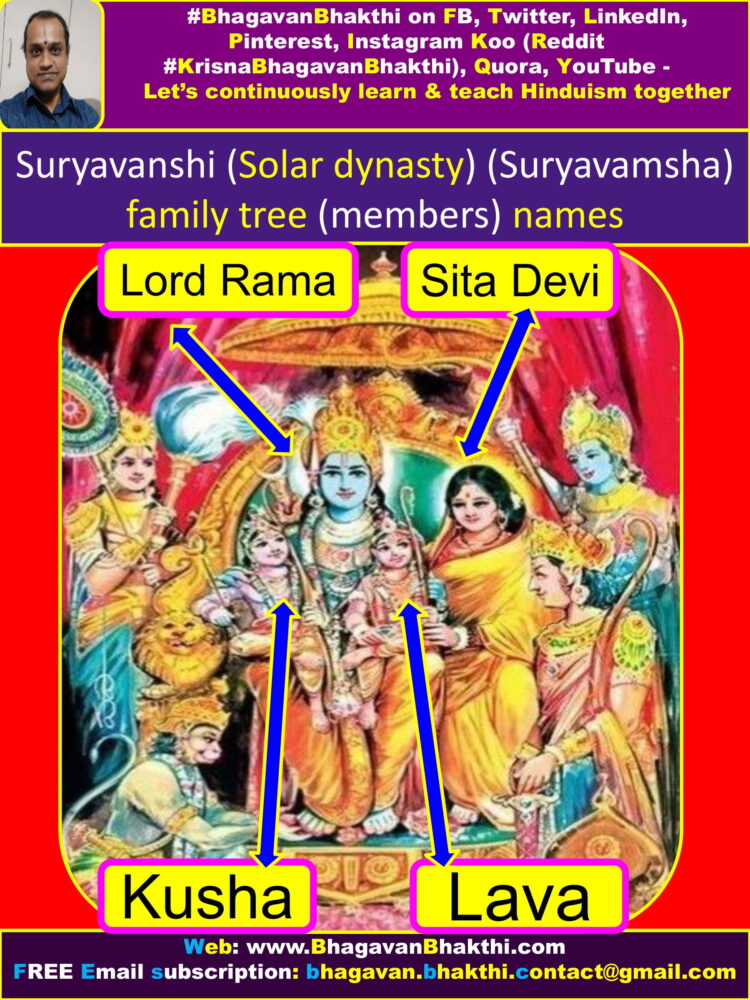 Kusha son name is ‘Atithi‘ and daughter name is ‘Kanakamalika‘ and she was married to Mahabhoja a Yadava king. 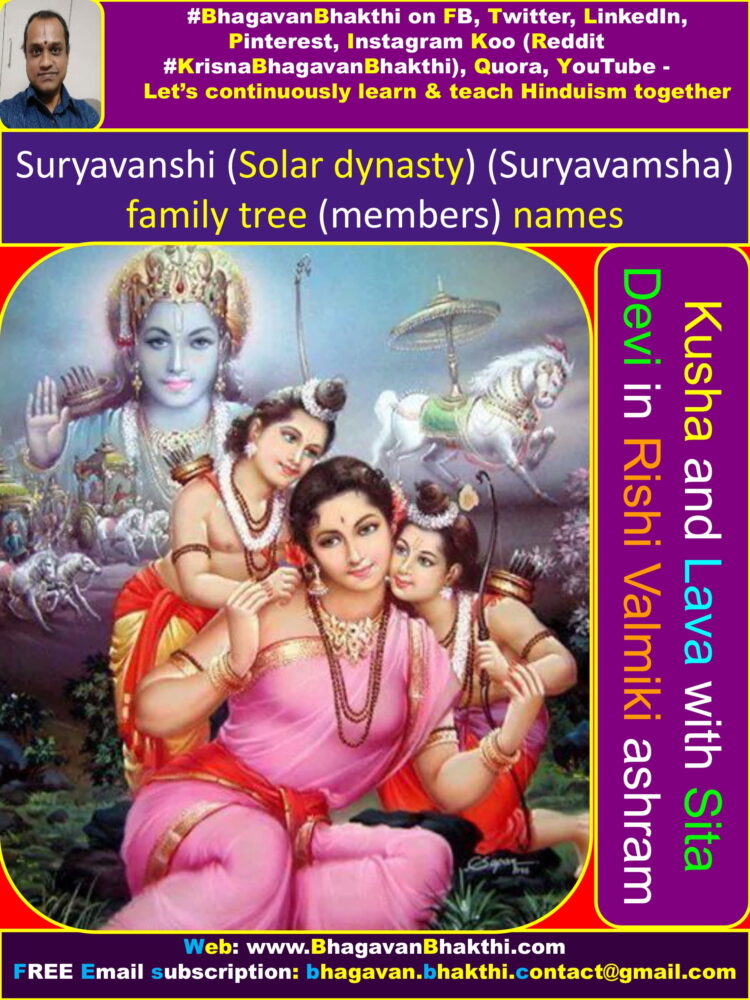 Atithi : Atithi is the son of Kusha and Kumudvati. Atithi was a contemporary of Chandravanshi (Chandravamsha) (Lunar Dynasty) King Turvasu II.

Nabha : Nabha is the son of Nishadha.

Pundarika : Pundarika is the son of Nabha.

Rudraksha : Rudraksha is the son of Chandravaloka.

Hiranyanabha became the disciple of Rishi Jaimini and propounded the system of mystic yoga which was initiated by Yājñavalkya. 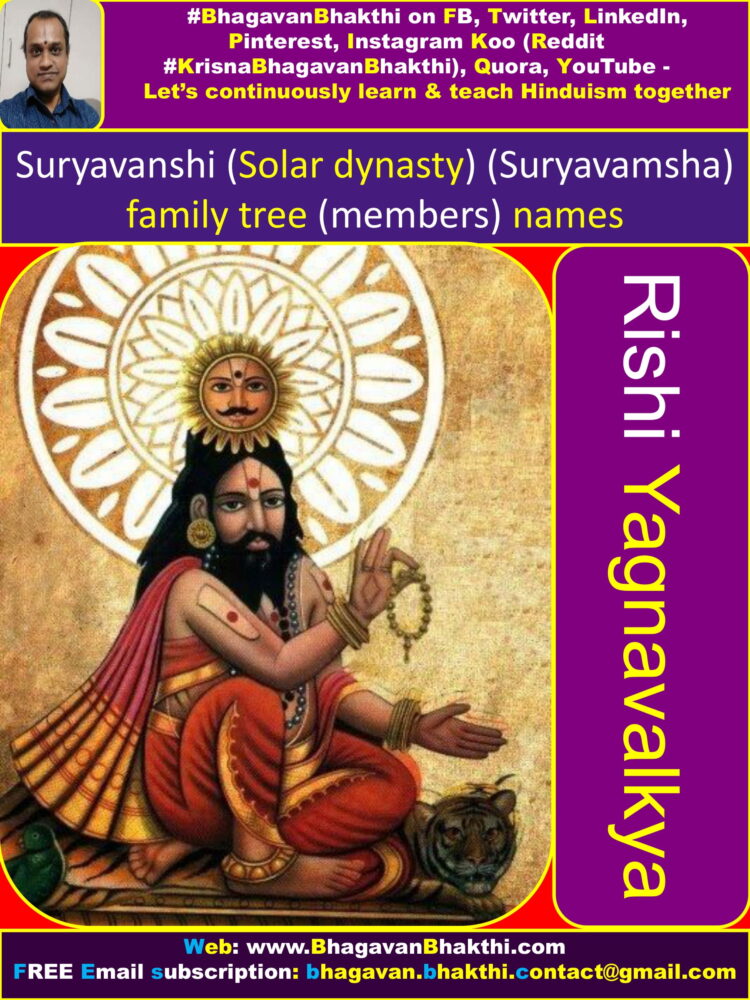 Pushpa : Pushpa is the son of Hiranyanabha.

Sudarshana : Sudarshana is the son of Dhruvasandhi.

Maru : Maru is the son of Sheeghra.

Takshaka : Takshaka is the son of Praenajit.

Bhanu : Bhanu (Read as Bhaanu) is the son of Prativyoma.

Barhi : Barhi is the son of Brihadraja.

Shuddhodana in his earlier life was one among the Tripurasura (3 demons) who were killed by Lord Shiva.

Shuddhodana was a ruler of Shakya of Kapilavastu. 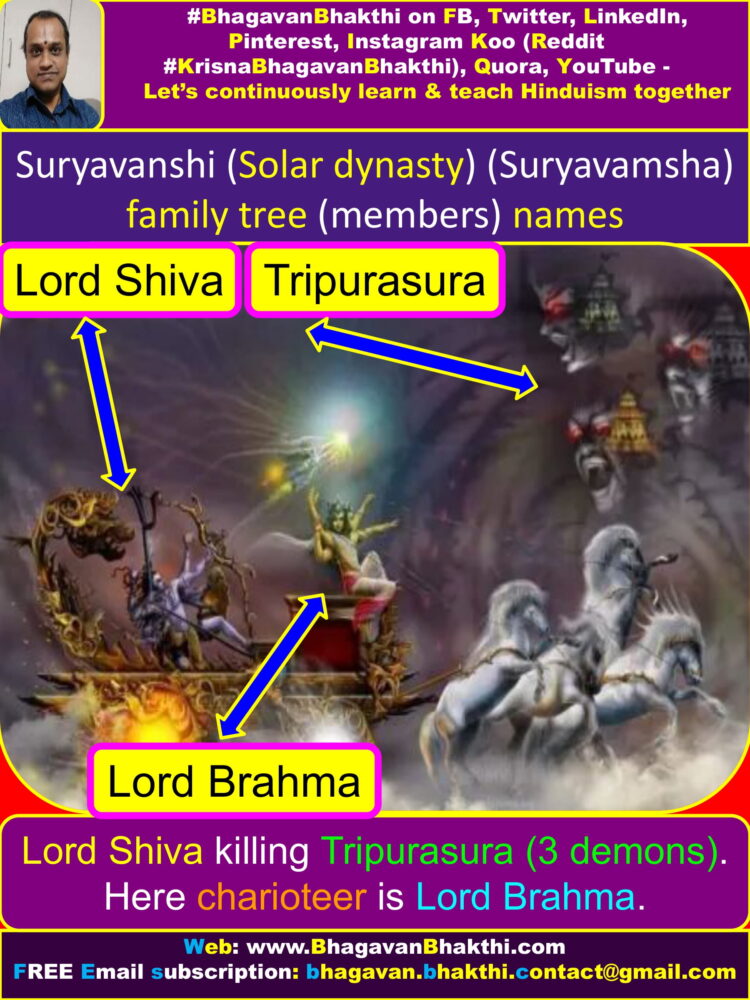 Siddhartha : Siddhartha or Gautama Buddha is the son of Shuddhodana and is an avatar of Lord Vishnu. 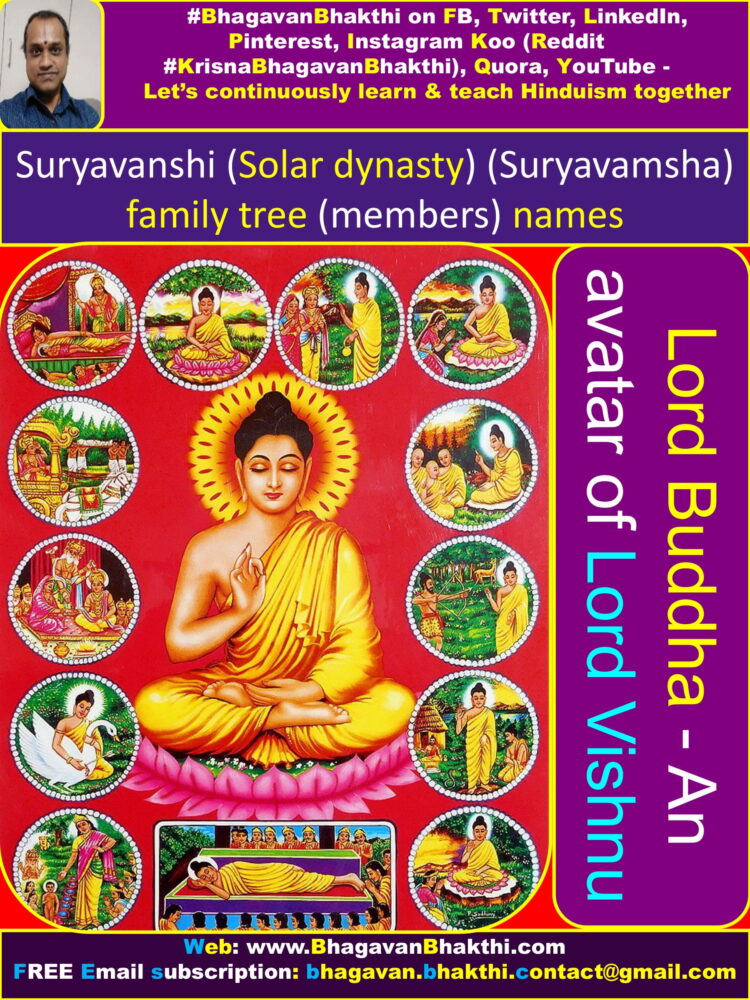 Rahula : Rahula (Read as Raahula) is the son of Siddhartha (Gautama Buddha).

Prasenajit : Prasenajit is the son of Rahula. Prasenajit was born when Siddhartha (Gautama Buddha) was 27 years of age.

Sumitra : Sumitra is the son of Suratha.

King Sumitra was defeated by a very powerful King called Mahapadma Nanda of Magadha in 362 BCE.

But King Sumitra was not killed, and he fled to Rohtas, located in present-day Bihar (The Sanskrit name of Bihar is Vihara). 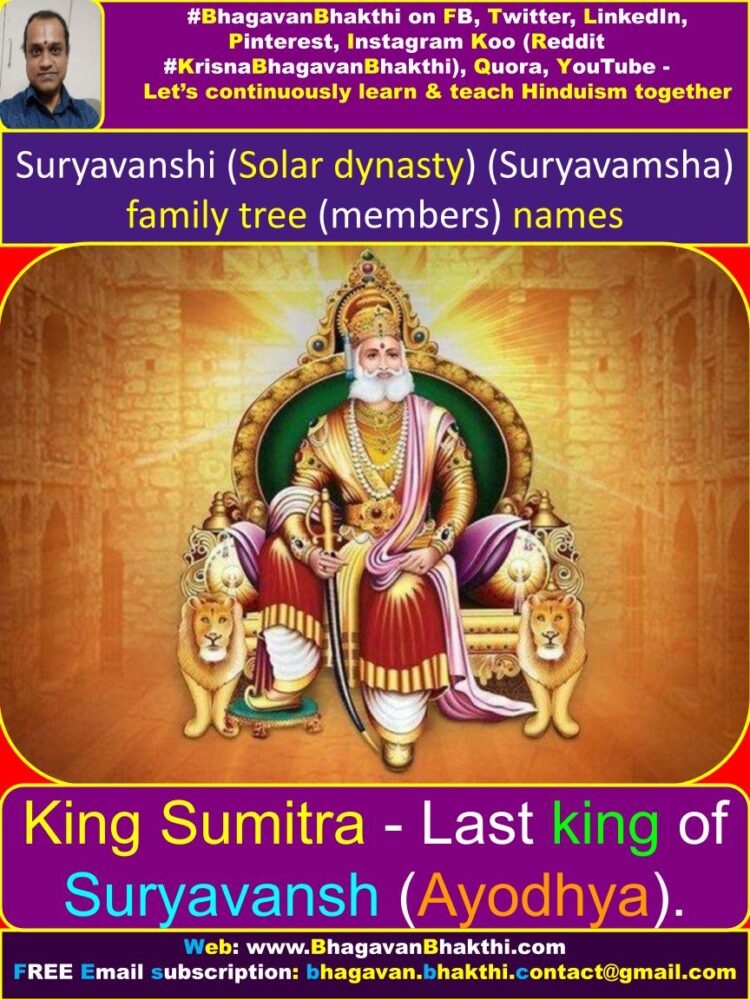 After Sumitra this lineage disappeared in the Kali Yuga.

The above same list is again reproduced in the photo image format as below for your better understanding: 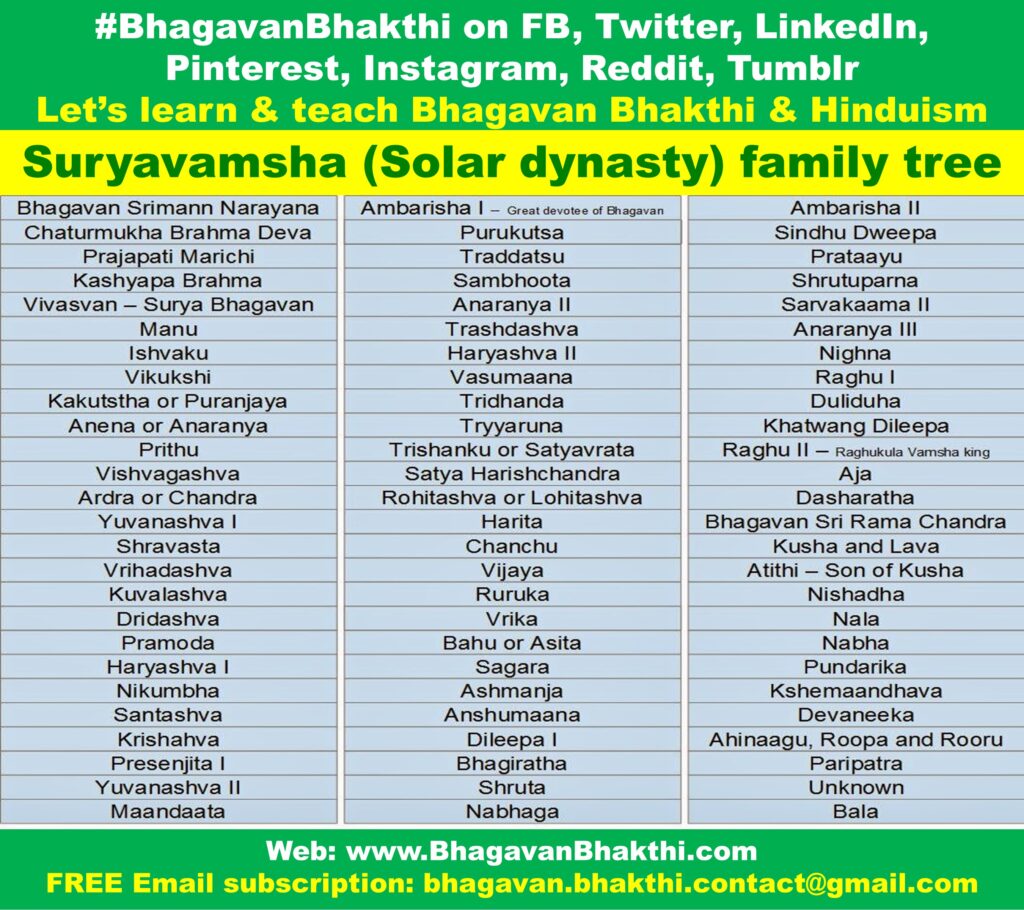 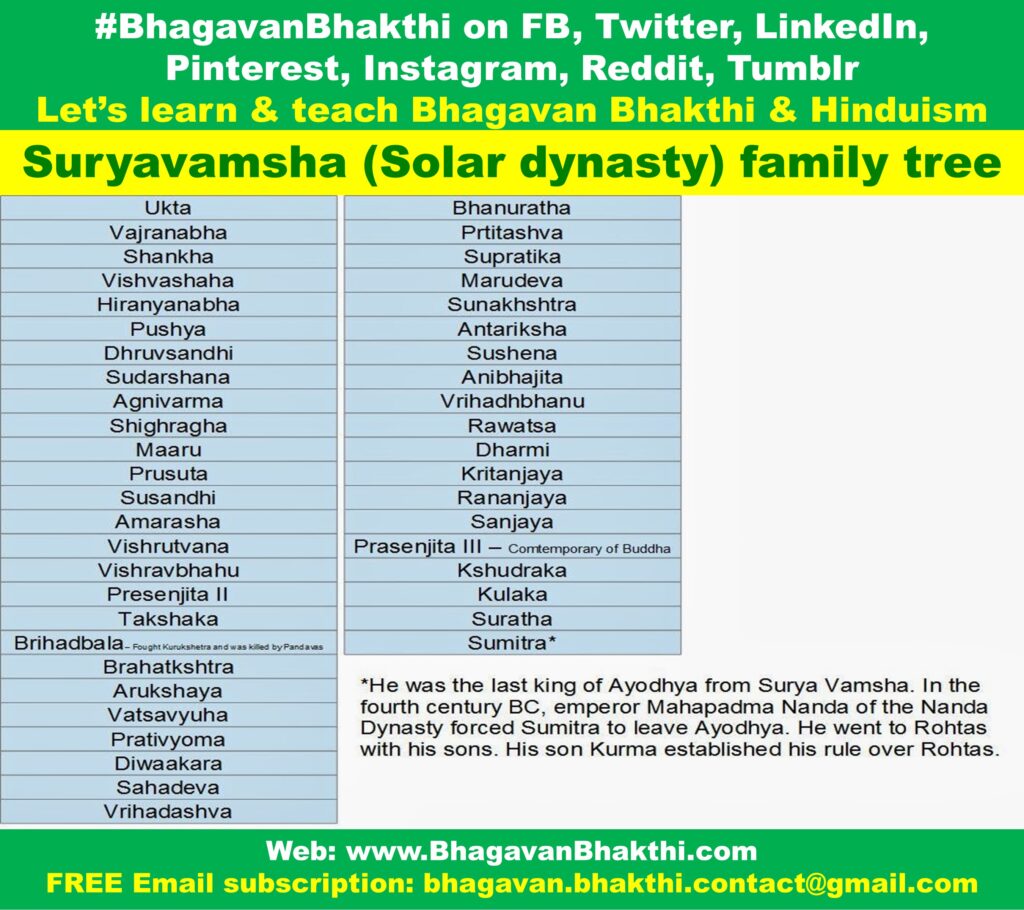 To know “why Ayodhya is so great“, you can visit my another post with the below link:

Why Ayodhya is so great

To know about the “Chandravamsha (Chandravansh) (Chandravanshi) (Lunar lineage) Family Tree“, you can click the below link: