Just before moving towards to know about “Last rites rituals (antyeshti) in Hinduism“, let us know few basic and important information. 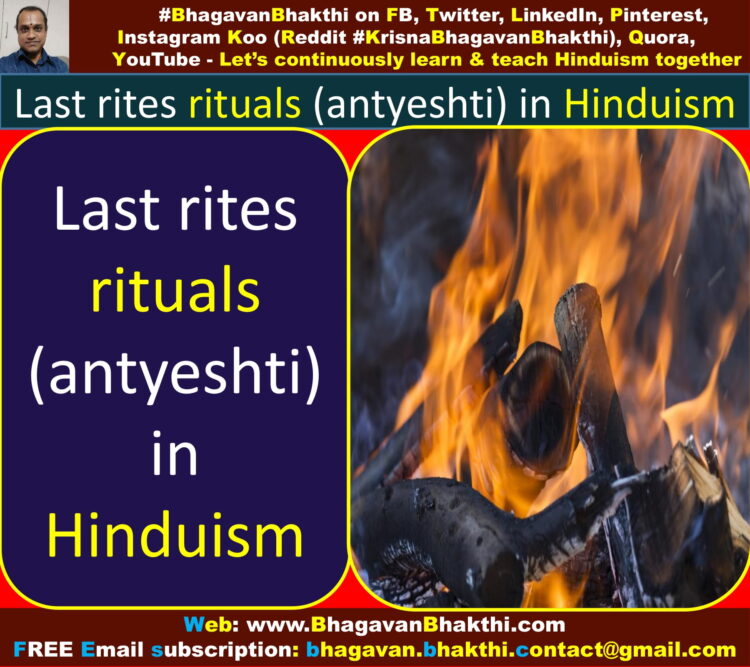 This rite of passage is the last sanskar in a series of traditional life cycle sanskars that start from conception in Hindu Sanatana Dharma.

The following is taken from ‘Varaha Purana’. 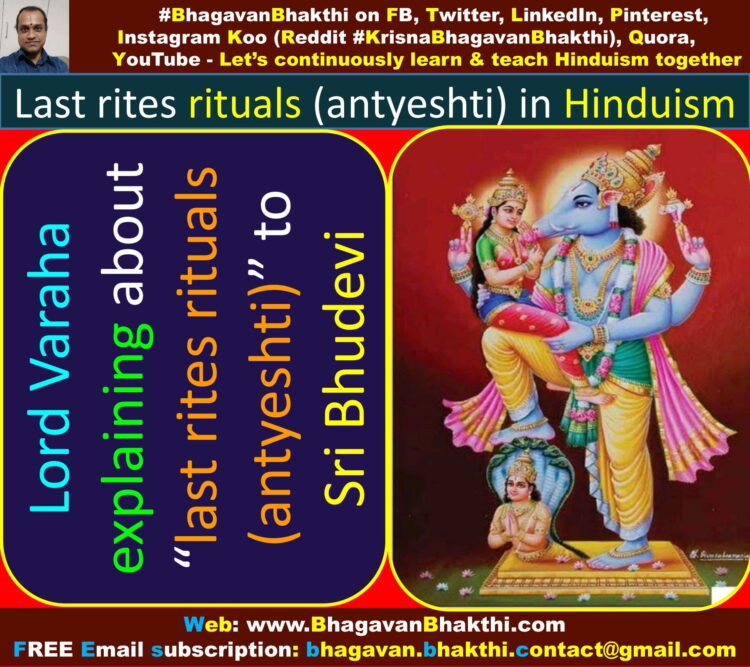 List of last rites rituals (antyeshti) in Hinduism are as given below:

3. THE FLAWED SHRADDH (SHRADDHA) AND ITS PREVENTION

Prithvi (Mother Earth), the consort of Lord Sri Varaha Swamy (he is an avatar of Bhagavan Sri Maha Vishnu) asked her husband as below.

“To define the meaning of Pitru yagya (rituals pertaining to last rite) and it’s significance.”

Lord Sri Varaha Swamy replied – “Sage Nimi was the first person to perform the rituals of Pitru yagya after the death of his son Atreya.’ 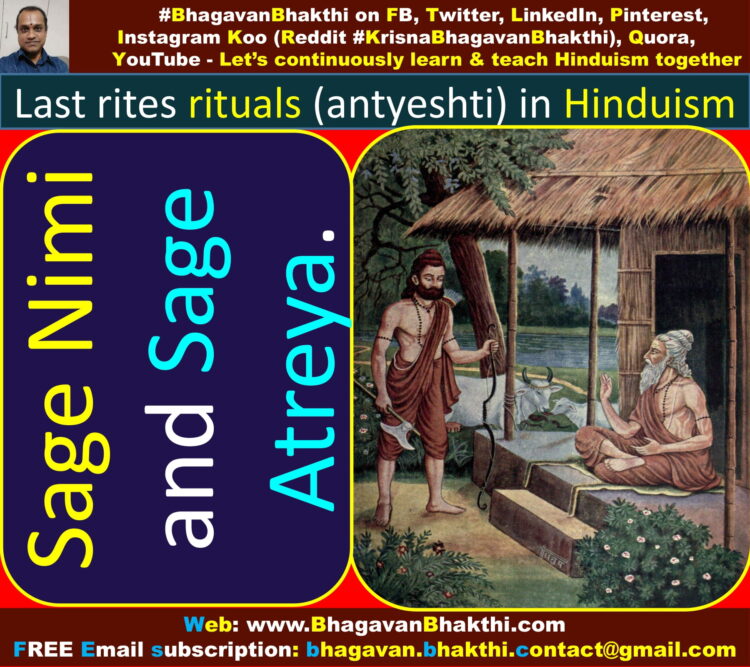 ‘Sage Atreya is famous for his penance which he did for ten thousand years.’

‘When Atreya died, his father ‘Nimi‘ was filled with grief. Nimi tried his best to overcome his sorrow, but to no avail.’

‘He thought that perhaps the performance of ‘shraddh (shraddha)‘ rituals would be the best means to get rid of his sorrow.’

‘So, Nimi decided to perform the ‘shraddh (shraddha)‘ rituals on the twelfth day of ‘magha masam‘.

‘On that day, Nimi invited many brahmins and fed them with the same delicacies which Atreya would have liked to eat.’

‘Nimi performed all the rituals well within a day which would otherwise have taken a week to perform.’

‘He also performed the rituals of ‘pinda danam‘ by donating cereals, vegetables and fruits.’ 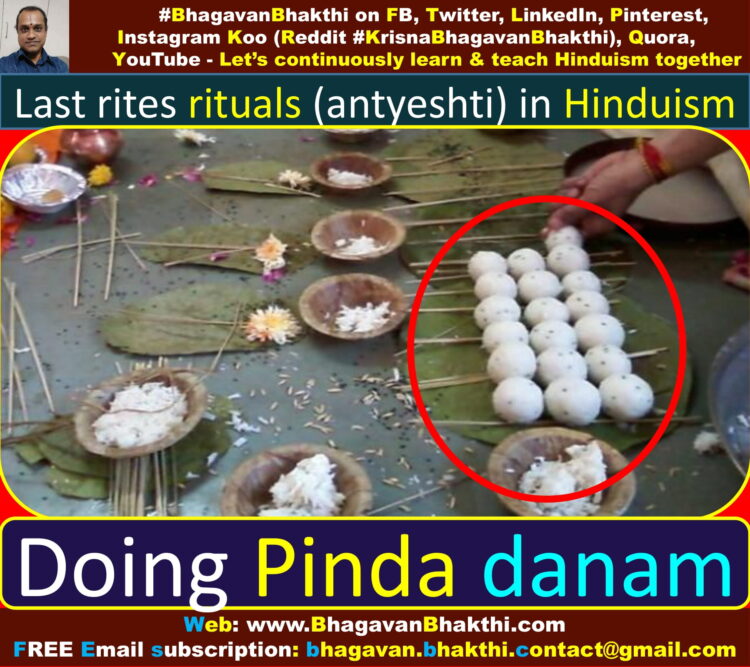 ‘While performing the rituals of pinda-danam, Nimi took some kusha grass in his hands and after pointing it towards south chanted Atreya’s name and gotra (Family’s divine name).’

‘In the night, Nimi sat on the seat of deer skin underneath which kusha grass had been spread.’

‘He then tried to concentrate on the tip of the nose.’

‘But, inspite of all his efforts there was no sign of mental peace Nimi was so desperately seeking and thought of his dead son continued to torment him.’

‘Nimi was troubled by a guilt that perhaps he had set a bad precedent by performing the rituals of pinda danam because nobody in the past had ever performed the rituals.’

‘Nimi was worried as to what would the coming generation think of him.’

‘He was so much troubled by the thought that he could not sleep for the whole night.’

‘Next morning Nimi got up, still worried. He remained in a disturbed state of mind for many days.’

‘At last, when it became too much for him to handle, he decided to end his life.’

‘In the meantime, sage Narada arrived there and assured him that there was nothing to be worried about as whatever he had done was most appropriate thing.’ 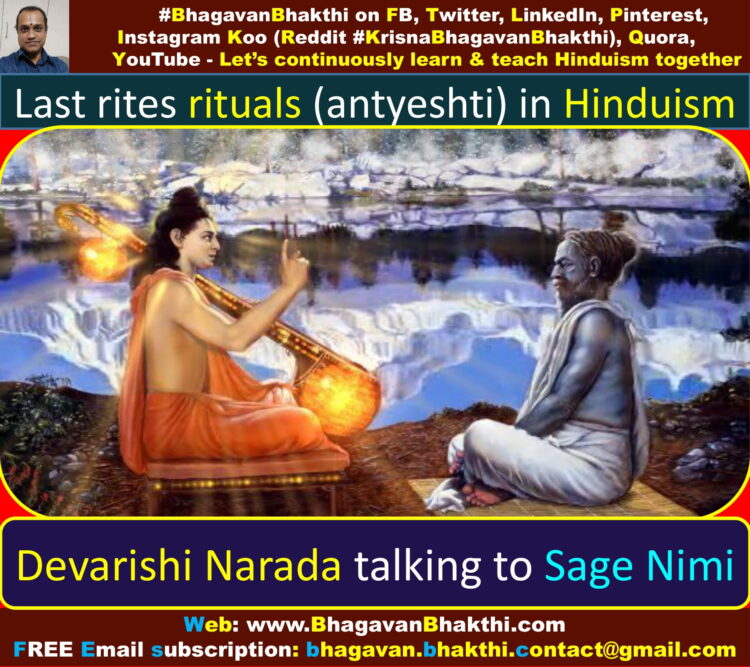 ‘Narada also convinced him that even his (Nimi’s) dead father would vouch for this fact.’

‘Nimi remembered his father who had died long ago. His father revealed to him that the rituals which he had performed were in fact the rituals of ‘Pitru-yagya’.’

‘The name Pitru-yagya’ was given by none other than Lord Brahma himself who was the first one to perform the rituals.’

‘Later on, Lord Brahma had described the rituals to Narada and this is why Narada was convinced that you had committed no wrong.’ 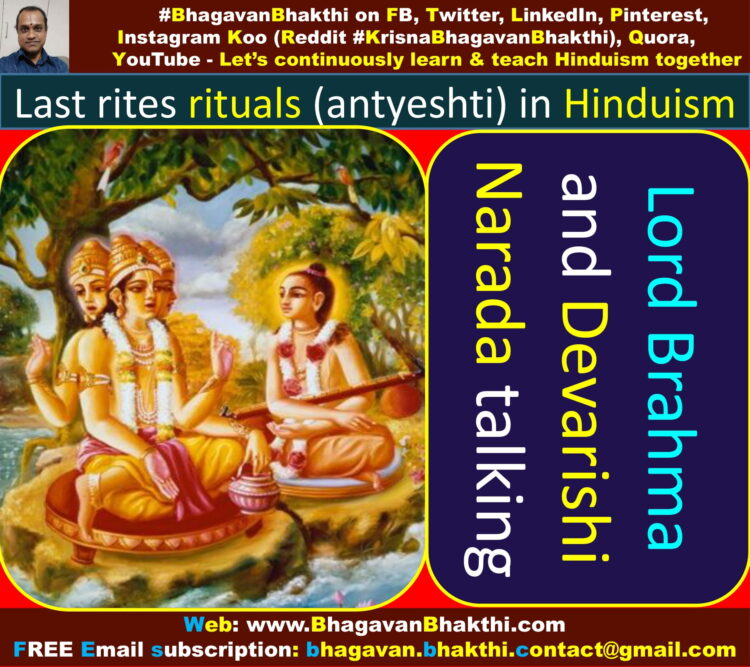 ‘When the death approaches a person looses his consciousness and becomes extremely fearful.’

‘At that time, a brahmin should constantly study the scriptures, so that he could die in peace.’

‘Donating a cow helps to pacify the soul of a dead person.’

‘If sacred mantras are whispered in the ears of a dying person, he will die peacefully.’

‘When the death seems imminent, a morsel of ‘Madhupaaka’ (mixture of curd, water, honey and clarified butter) should be kept in the mouth of the dying person.’

‘While doing this one should pray to the almighty Bhagavan Sri Maha Vishnu to liberate the dead man’s soul.’

‘The dead body should then be carried and kept under a tree where it is purified by smearing ghee, oil, perfumes, etc.’

‘It is then carried to cremation ground and kept at the bank of a river-feet pointing towards south.’ 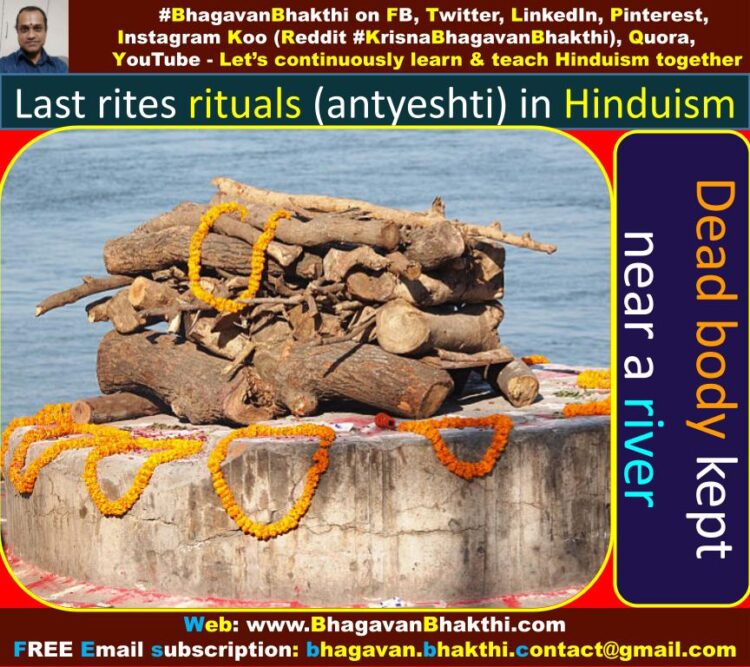 ‘After this, the dead body should be bathed by remembering all the sacred places of pilgrimage.’

‘It should then be kept on the pyre-feet pointing south. The pyre should be lit and the following prayer should be said’ –

‘O Agnideva! I pray to you to burn all the sins committed by this person, so that he attains to heaven.’

‘After consigning the dead body to flames, the rituals of ‘tarpana‘ and ‘pinda-danam‘ are performed.’ 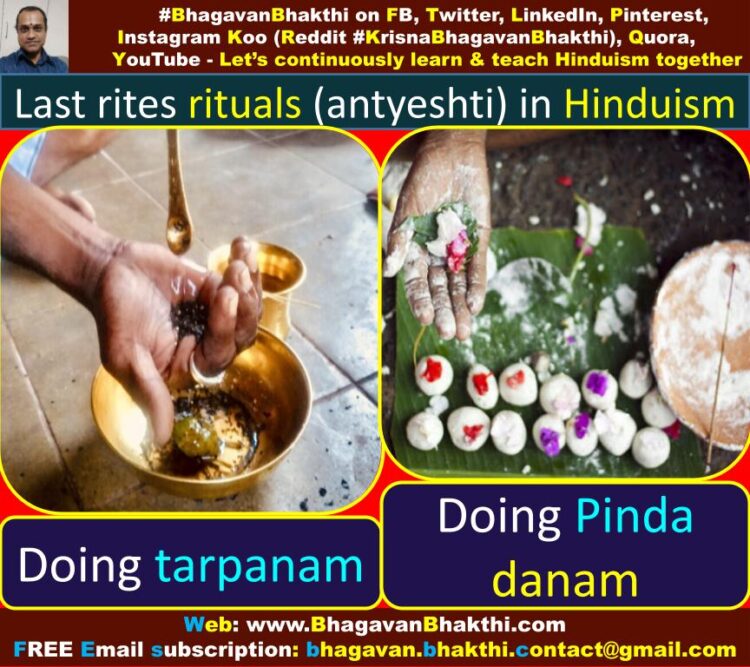 ‘All the people assembled there, should purify themselves before returning home.’

‘The period starting from the time the dead body is consigned to flames till the next ten days is called ‘Ashaucha period‘.’

‘It is applicable to all the relatives coming from the same gotra of the deceased.’

So it is the period during which the son of the deceased is considered to be impure.’

‘The period begins from the day on which the death has occurred and continues for the following ten days.’

”Pinda-danam‘ means offering certain kind of food to the deceased in the belief that it would satiate the dead person’s soul.’

Bhagavan Sri Varaha Swamy, while describing about the rituals which are supposed to be performed during the period of ‘ashaucha‘ and also the rituals of making pinda danam, told Prithvi –

‘The observer of shraddh (shraddha) rituals should take his bath in a river on the third day from the day on which death has occurred.’ 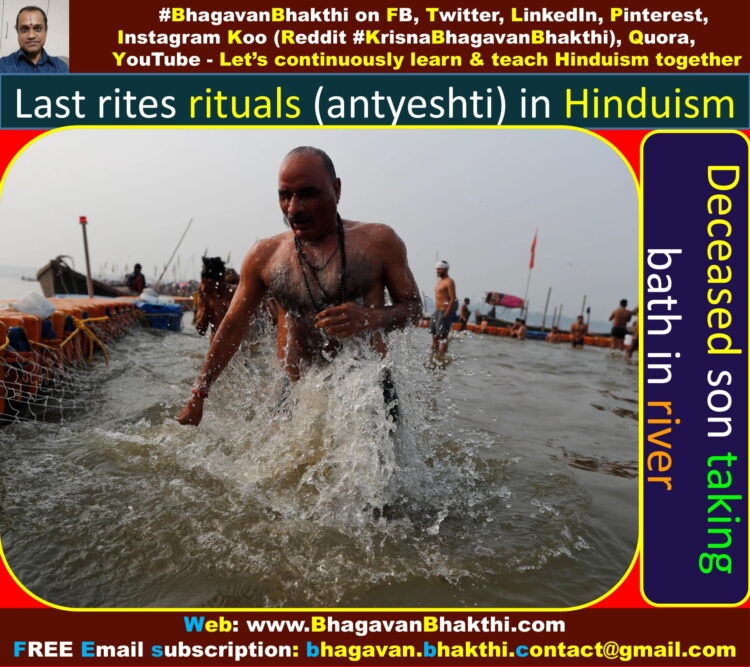 ‘After taking his bath, he should offer three ‘pindas’ (consisting of cereal flour) as well as three palmful of water into the river in the name of the deceased.’

‘On the fourth, fifth, sixth and seventh days, he should make offerings of one pinda and one palmful of water in the name of the deceased.’

‘He should never make offerings of the Pindas at the same place on the contrary he should select different spots for this purpose.’

‘On the tenth day, he should get his hair tonsured and change his clothes.’

‘His relatives (same-gotra) should take their bath after applying an ointment prepared from sesame seeds, amla and oil on their bodies.’ 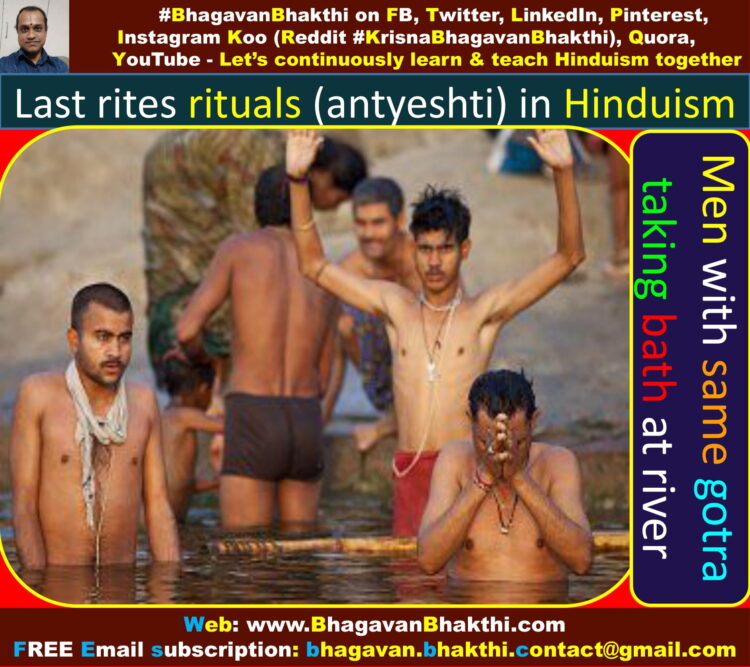 ”Ekodishta Shraddh (Shraddha)‘ is performed on the eleventh day.’

‘For this ritual to be performed, the concerned person should first purify himself and then offer Pinda to the deceased person as well as other manes.’

‘The rituals of Ekodishta Shraddh (Shraddha) are same for all the four varnas.’

‘The brahmins should be invited and fed on the thirteenth day.’

‘While feeding the brahmins, a religious vow (Sankalpa) is taken in the name of the deceased person.’

‘For the purpose of offering ‘pinda’, an ‘altar’ should be made at river-bank or any other suitable place.’

‘The rituals can be performed either facing south or east.’

‘Offering 64 (Pindas) is considered to be ideal.’

‘Pinda danam can also be made under a peepal tree, but the place should be well protected from the reach of animals like dogs, cock, pigs, etc.’ 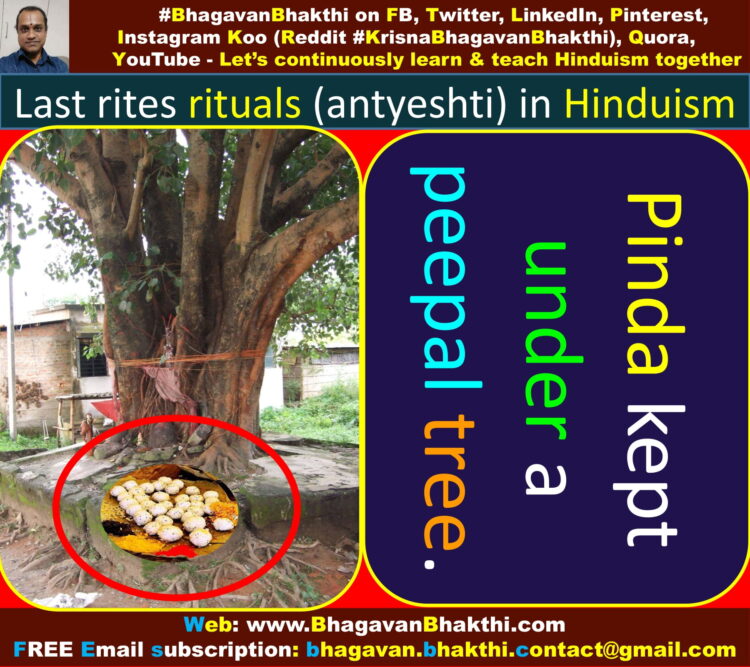 ‘It is believed that if these animals visit the place where ‘Pinda danam’ is being made then it becomes difficult for the soul to attain liberation.’

‘The rituals of Pinda danam should be performed at a pure place, otherwise there is a fear of soul going to hell.’

‘The name and the gotra of the deceased person should be pronounced while performing the rituals.’

‘After the rituals are complete, all the assembled persons may sit down to have their meal.’

‘Donating things like an umbrella, clothes, cereals, ornaments to the brahmins are believed to be auspicious.’ 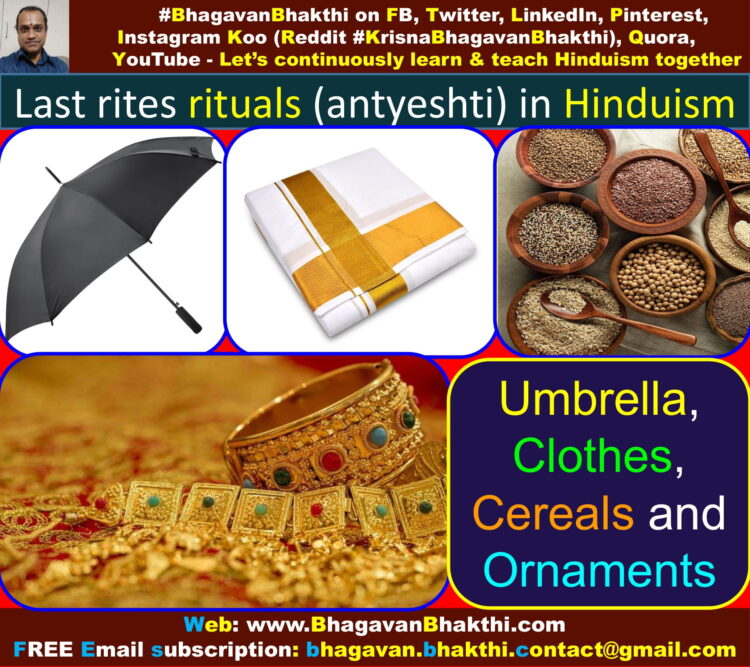 THE FLAWED SHRADDH (SHRADDHA) AND ITS PREVENTION

Prithvi then requested Lord Sri Varaha Swamy to describe about the mistakes committed during shraddh (shraddha) rituals and how they could be prevented:

Lord Sri Varaha Swamy replied: ‘It is a grave sin to partake of a meal meant for the soul of the deceased person.’

‘Anybody who has committed this sin, should atone for his sin by observing a fast for full day and a night.’

‘He also has to perform many other rituals like taking bath in a river flowing eastward, performing tarpana, making offerings of sesame seeds into the fire, Shanti path, Mangal path etc.’

‘Partaking of ‘Pancha-gavya‘ (a mixture of cow’s milk, urine, cow-dung, curd and clarified butter) or ‘Madhupaaka’ is also believed to purify such a person.’ 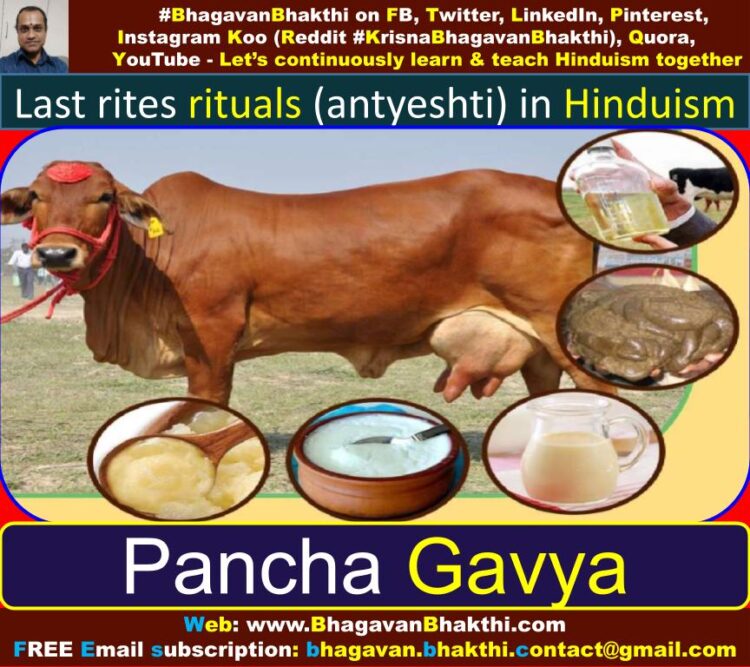 ‘Similarly, showing disrespect to the invited brahmins is also considered to be a grave sin.’

‘Donating articles to unworthy brahmins is also considered to be an inappropriate act.’

‘The performer of Shraddh (Shraddha) should refrain from all these acts.’

“Madhupaka” manifested from the right half of my (Lord Sri Varaha Swamy) body at the time when the process of creation began.’ 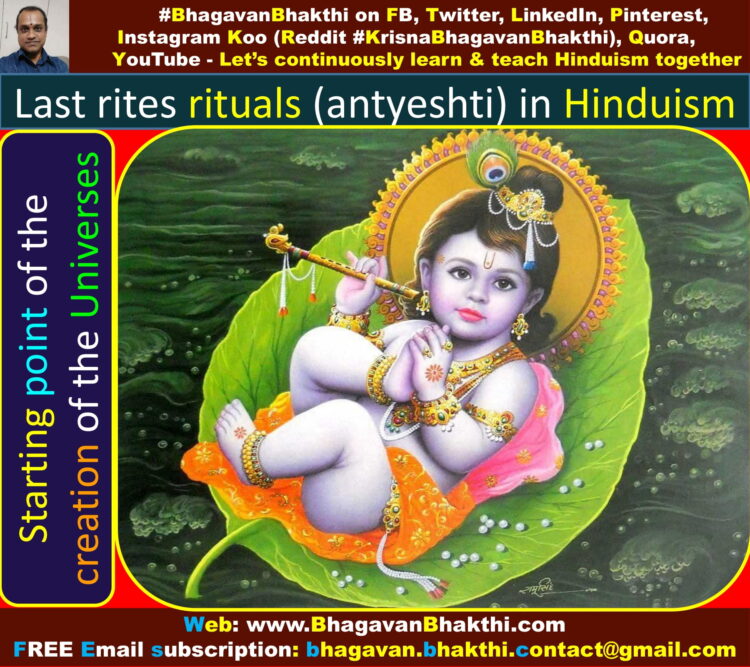 ‘This is the reason why it is so pure.’ ‘Anybody who makes offering of Madhupaka in the course of my worship, attains to my abode.’

‘For the preparation of Madhupaka, honey, curd and ghee are mixed in equal proportion.’ ‘While preparing it, sacred mantras in my praise should be constantly chanted.’

‘Giving some Madhupaka to a dying man liberates his soul.’ 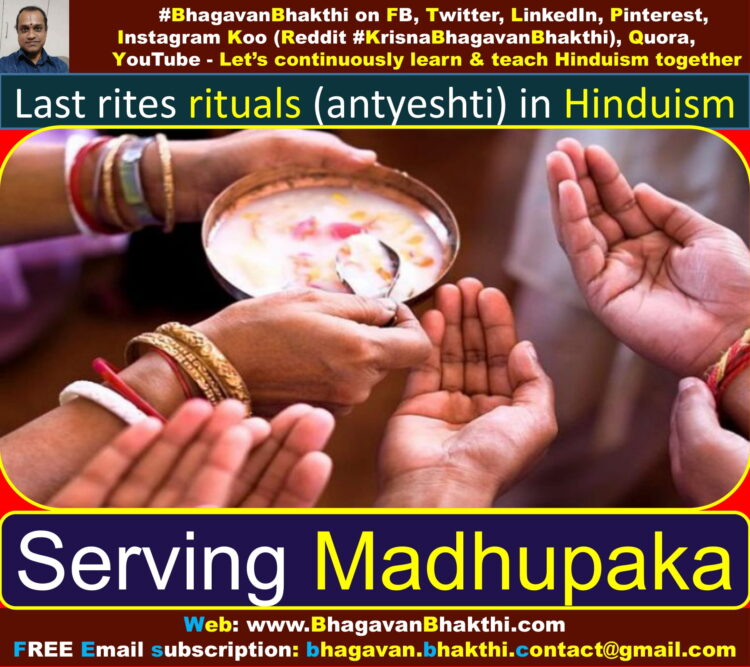 To know “why idol worship is done in Hinduism“, you can visit this link to gather more information:

To know more about “Hinduism important information“, please click the below link:

To know the significance of the months of Kartika, Margashirsha and Vaishaka, you can click the below link:

Significance of the months of Kartika, Margashirsha and Vaishaka