What are river Narmada unknown facts

Namaste friends, how are you doing today? Bhagavan Sri Vishnu and Lord Shiva blessings to you and your family!

The descent of Narmada: Explaining the reason why Narmada had to descend down to earth, Sutaji narrated a tale to the assembled sages:

Once, Rishi / Sage Markandeya was taking rest at the bank of river Narmada where Yudhishthira accompanied by Draupadi Devi arrived there.

Yudhishthira curiously asked Rishi / Sage Markandeya about the reason he had chosen the bank of Narmada as his resting place when there were so many other holy places of greater significance.

Rishi / Sage Markandeya recounted a tale, which said how some Rishis / sages had requested king Pururava to bring down river Narmada to the earth, so that the whole world becomes liberated from its sins. 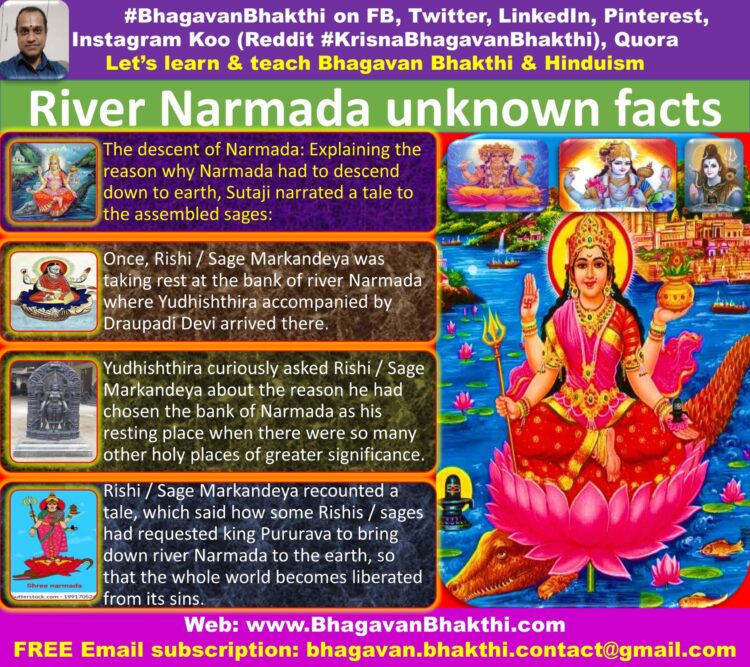 List of river Narmada unknown facts are as given below:

Pururava did an austere penance

Narmada instructed Pururava to do tarpana 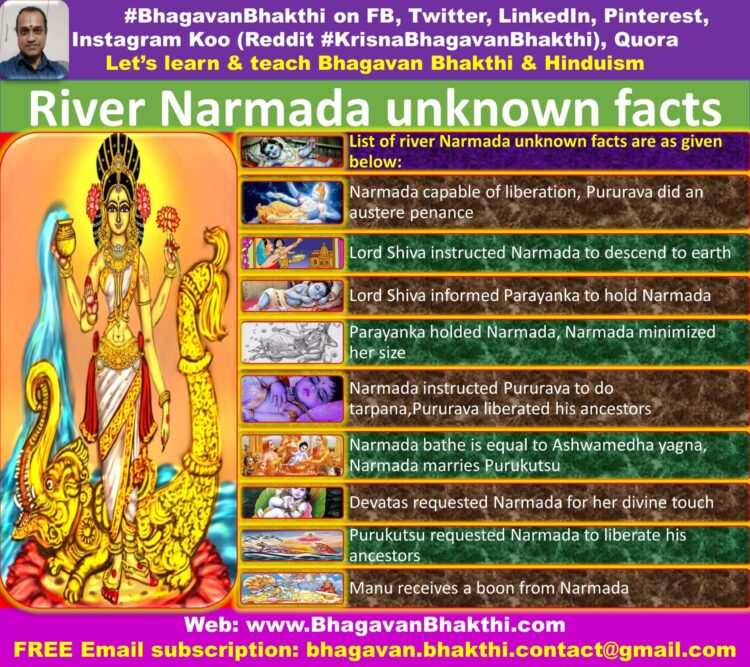 Manu receives a boon from Narmada

Describing the holiness of Narmada, Rishis / Sages had told Pururava: 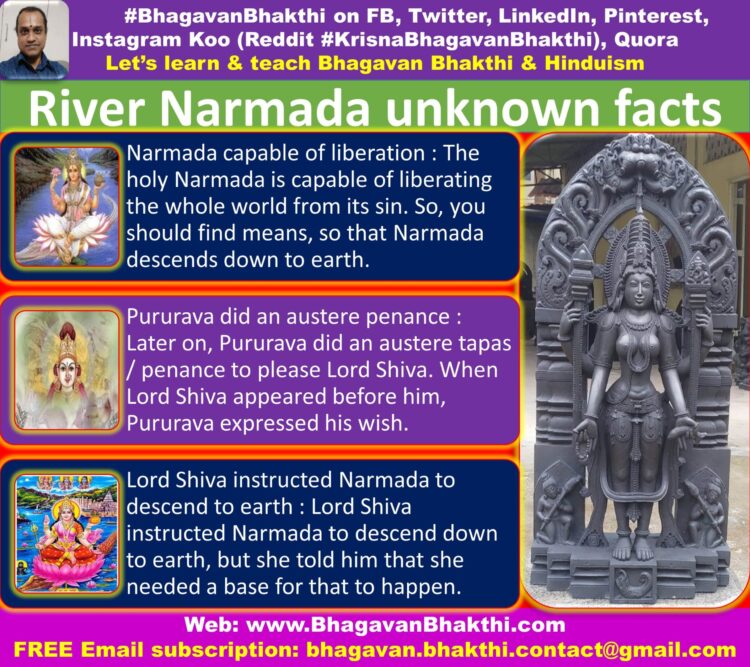 Parayanka holded Narmada : Parayanka agreed to do hold Narmada and this was how river Narmada came down on earth. 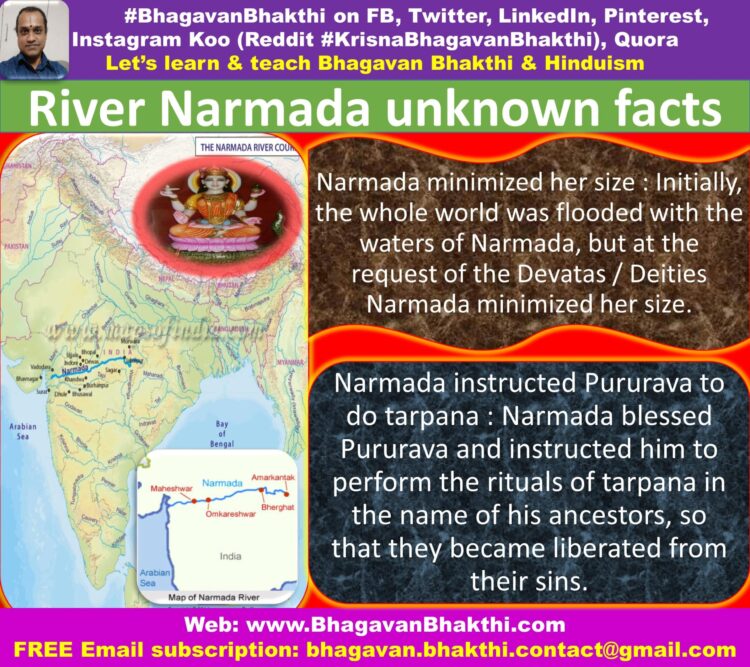 Narmada instructed Pururava to do tarpana : Narmada blessed Pururava and instructed him to perform the rituals of tarpana in the name of his ancestors, so that they became liberated from their sins.

Narmada bathe is equal to Ashwamedha yagna : Having finished his tale, Rishi / Sage Markandeya told Yudhishthira that one who takes a holy dip in Narmada attains virtues similar to that of performing Ashwamedha yagya.

But, Narmada refused to give them that privilege on the pretext that she was still unmarried and it would not be proper for her to do so.

All the Devatas / Deities then requested her to become the consort of Purukutsu to which she agreed. This way, Narmada married Purutkusu. 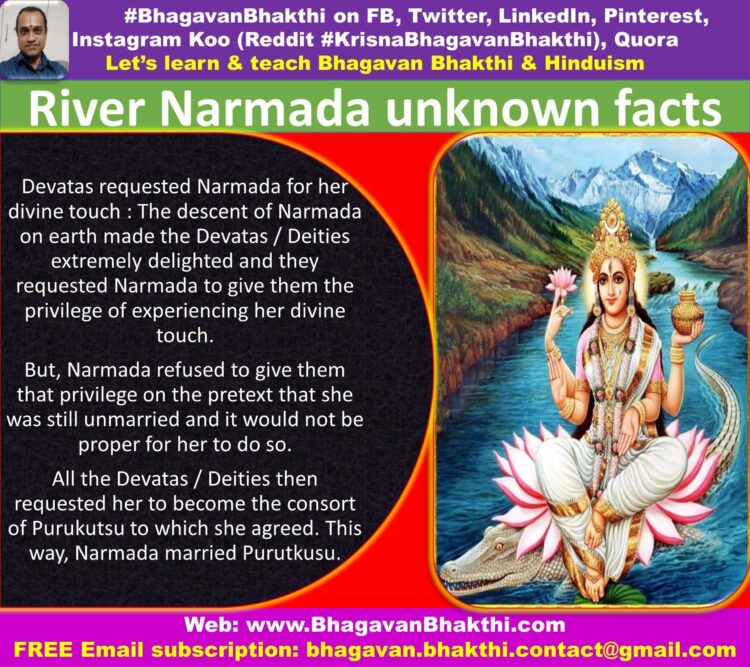 Narmada readily obliged, and this way Purutkutsu contributed in his ancestors’ departure to higher planets.

One day, while he was going to sleep, he heard a peculiar sound, as if numerous small bells were ringing.

He was perplexed and could not ascertain the cause of that sound, so he asked Maharshi Vashishtha about this.

The sound that you heard last night emanated from the small bells attached to number of aircraft kept on the roofs of the residences of such people who are virtuous. 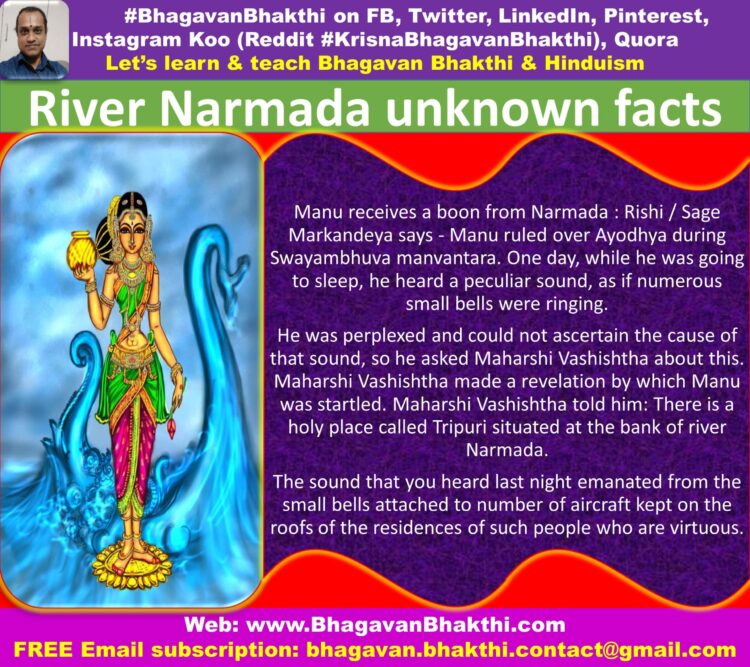 O king! Only Narmada is capable of giving salvation to lowly of sinners.

Manu was highly impressed and decided to go to Tripuri along with his whole clan.

All of them took holy dips in the Narmada and became liberated from all their sins.

Manu performed a grand yagya at the bank of Narmada to which all the Rishi / Sages and hermits were invited.

Narmada became pleased by his devotion and expressed her willingness to fulfill any wish that Manu desired.

Manu requested her help in bringing down Ganga and other holy rivers to earth. 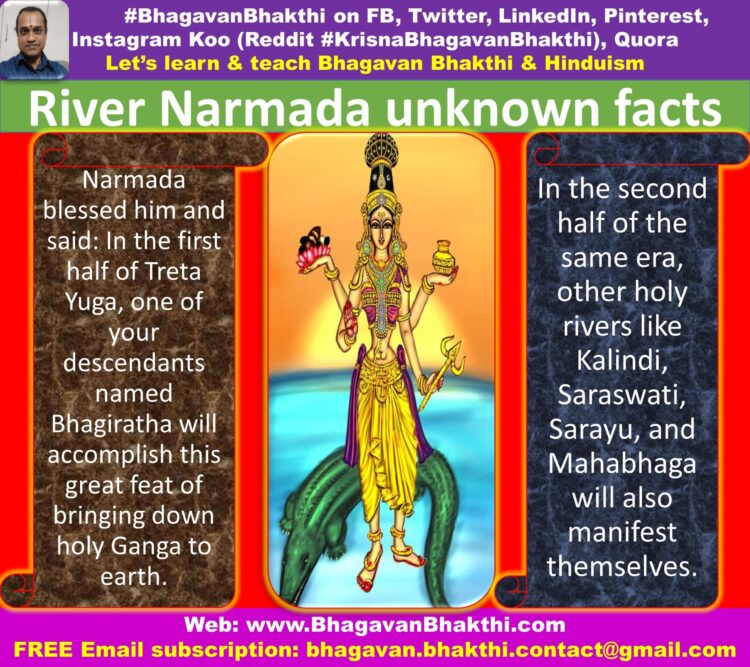 Narmada blessed him and said:

In the first half of Treta Yuga, one of your descendants named Bhagiratha will accomplish this great feat of bringing down holy Ganga to earth.

In the second half of the same era, other holy rivers like Kalindi, Saraswati, Sarayu, and Mahabhaga will also manifest themselves.

To know the ‘Greatness of Ganga’, you can click this below link: